It is finally the week.  The week of family and thankfulness and food and celebration.  THANKSGIVING! 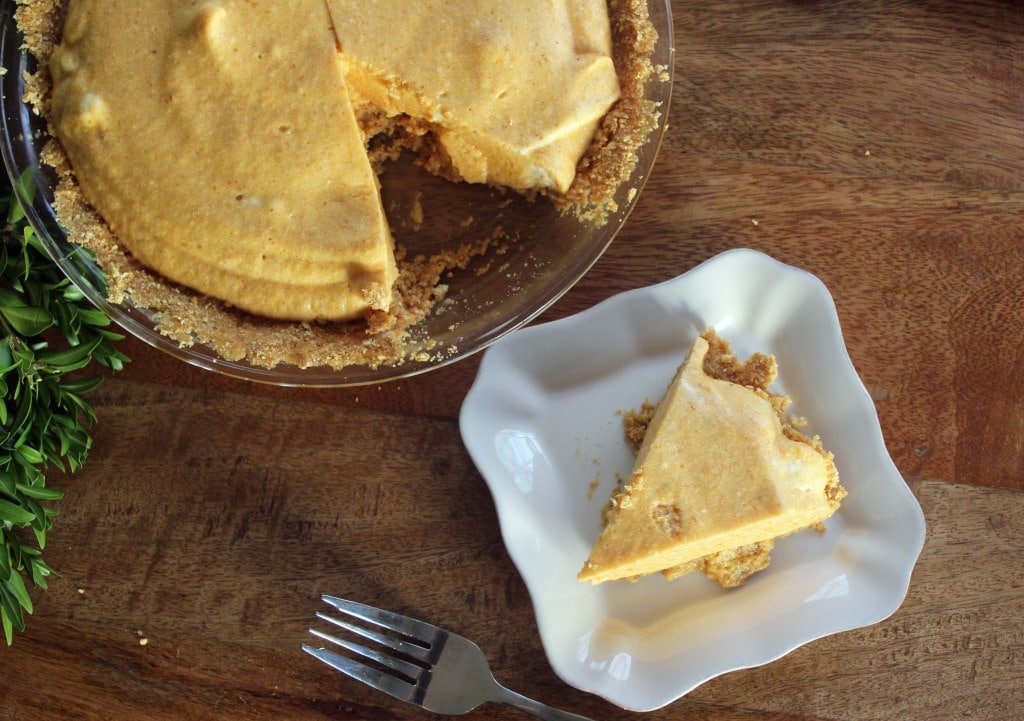 And also.  We are going on a cruise on Thursday.  Did I mention that?

We're actually celebrating Thanksgiving on Wednesday with my family before we leave for our trip, but I've been making Thanksgivingy things for over a week now for various catering gigs, cooking class, etc.  Tis the season!

I'm absolutely wiped out, and the thought of this pie on Wednesday is keeping me going.  It's an old family recipe (my mom's recipe card was written by my great grandmother), and I can't remember a Thanksgiving without it.  It's  FLUFFY pumpkin pie with egg whites and spices and a graham crust, which I love.  I make some modifications to the recipe to ensure that the egg whites stay stiff AND to healthen up the crust.  No butter!  No sugar!  It's legit. 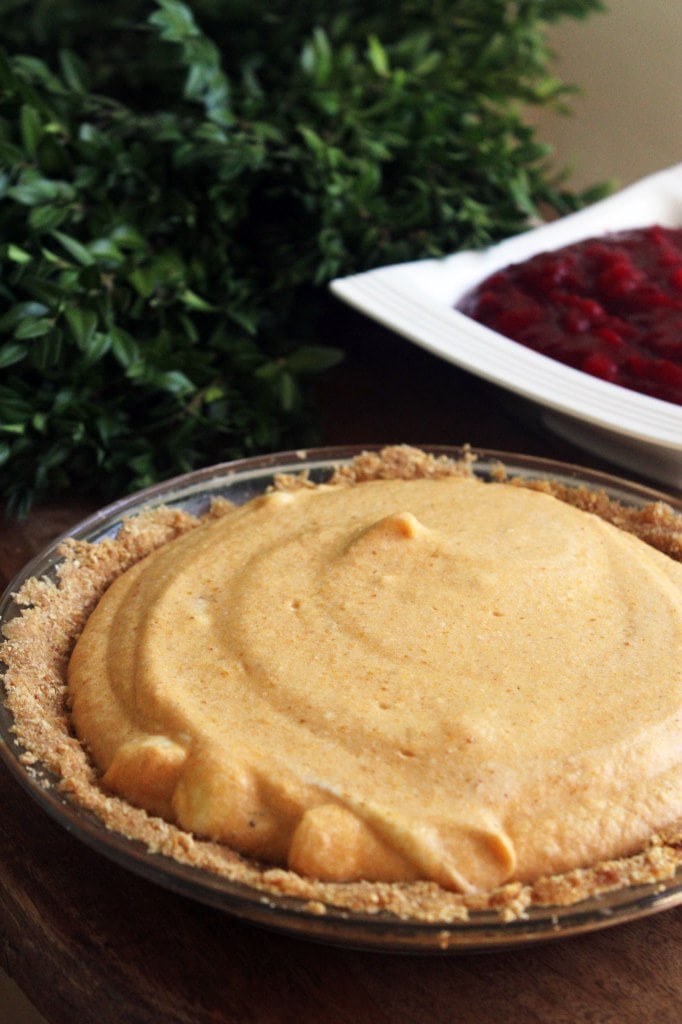 Let's grab our stuff!  What I love about this pie is that it takes less than an hour start to finish to make, then it just needs to chill for a few hours.  You can make it today, and it'll be perfect for Thursday!  Love make-ahead stuff, especially when it comes to baking and you do need to pay a little bit more attention.  For the crust, there is an option to use applesauce OR melted butter to moisten the graham cracker crumbs.  This is one time where I swear that you can't tell a difference, so I sub applesauce, which makes this a health food.  You're welcome.  Then for the filling we use eggs, pumpkin, sugar, milk, water + gelatin, salt, cinnamon, nutmeg, and vanilla.  Oh!  The recipe calls for ginger.  I read it.  Got out nutmeg.  Used it.  No biggie.  You could also use 1 teaspoon of pumpkin pie spice for the ginger/cinnamon if you have that on hand.  Whatever you like! 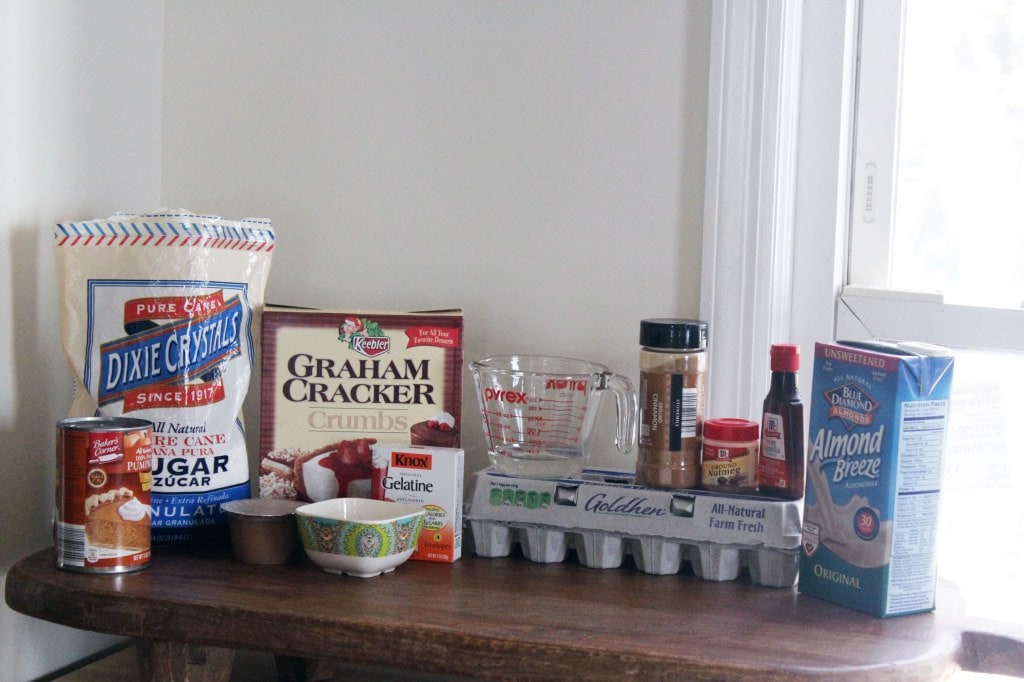 First, we'll make the crust.  All ingredients in a bowl, stir with fork, it becomes kind of sandy. 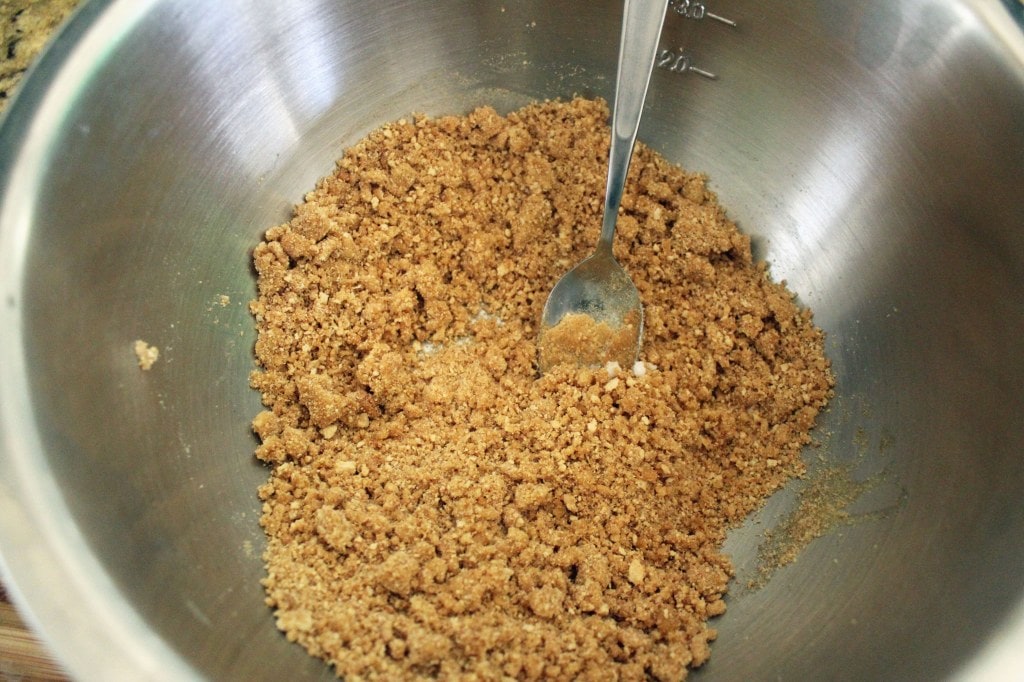 Then, dump the crumb mixture into a pie plate. 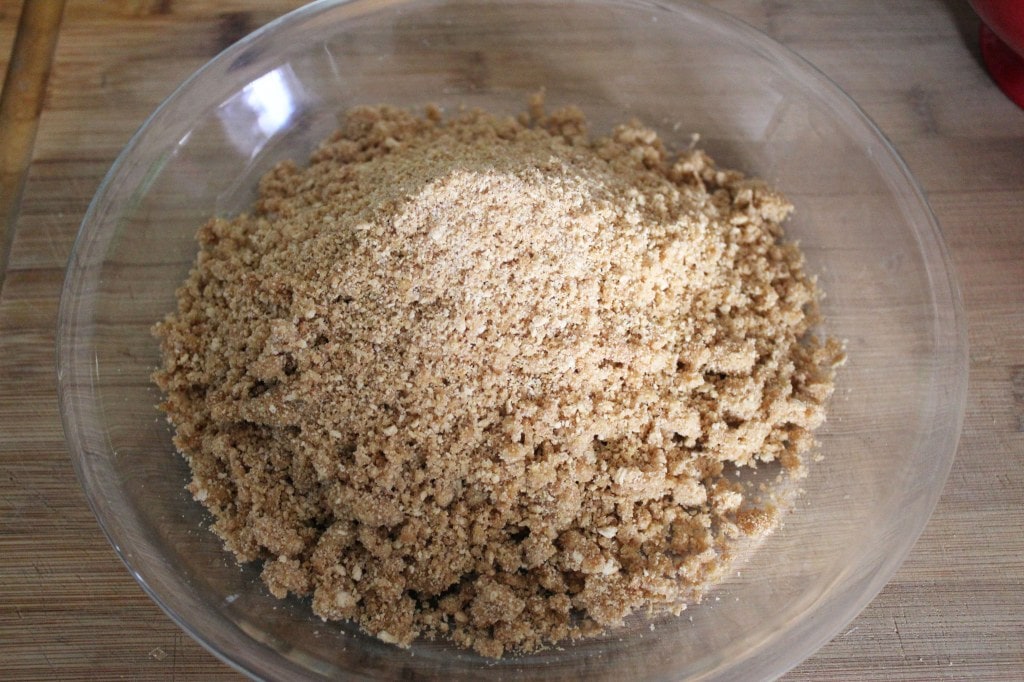 Use your fingers to press the graham into a pie crust shape, just be patient and work the ingredients all the way up the sides. 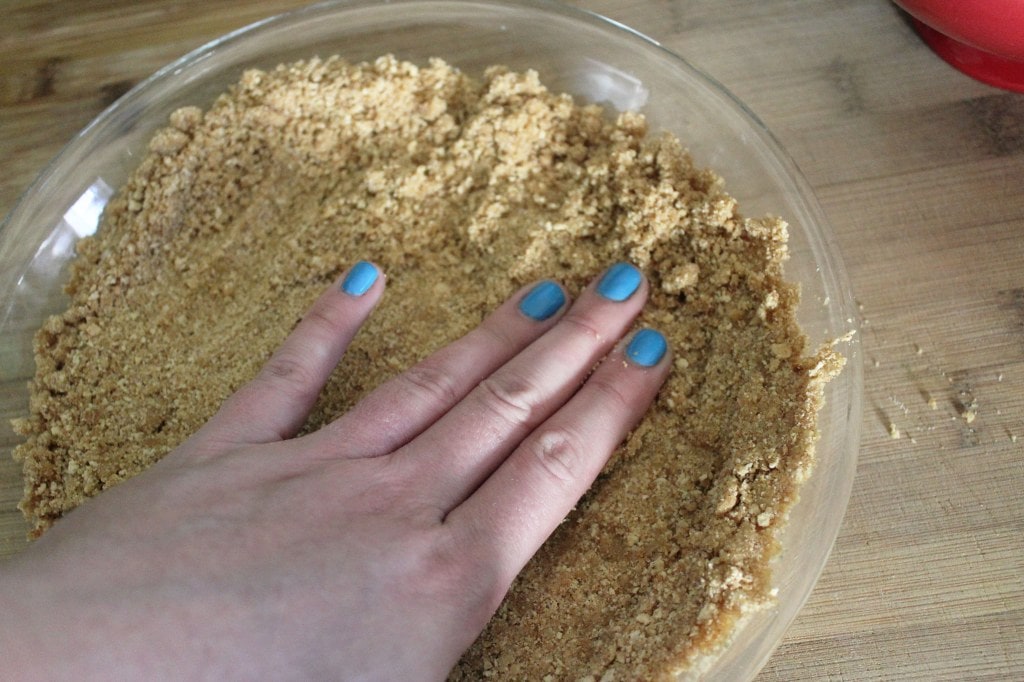 It takes a few minutes, but it's not that bad!  Stick the crust into the fridge to chill while you make the filling. 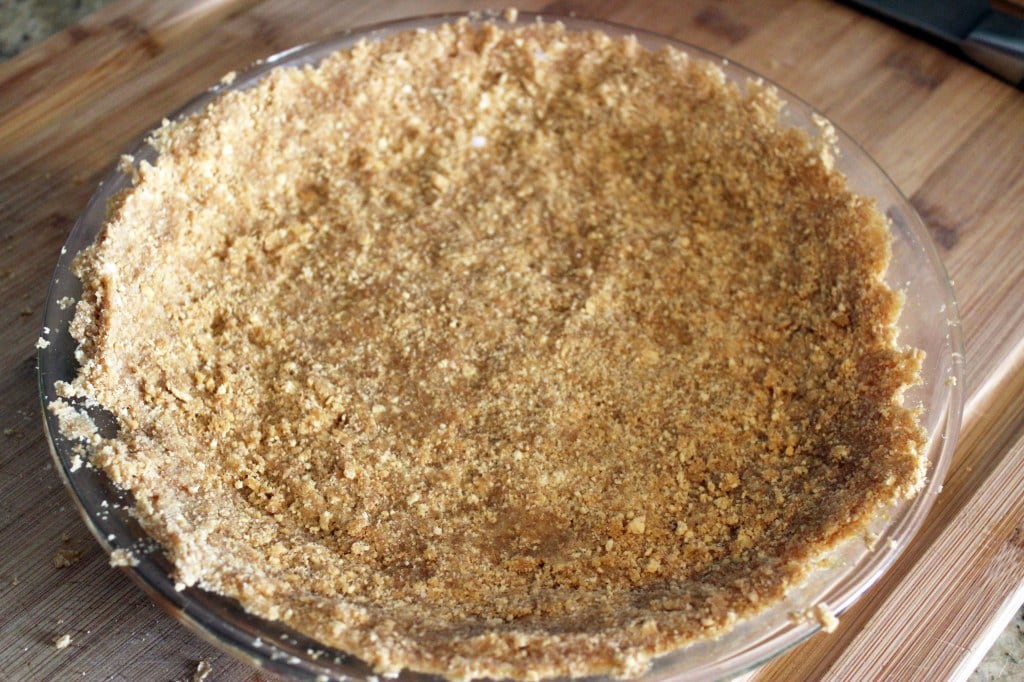 First, we add the gelatin to the water to let it soften slash "bloom" for a few minutes.  It'll get kind of .... gelatinous.  As you'd expect. 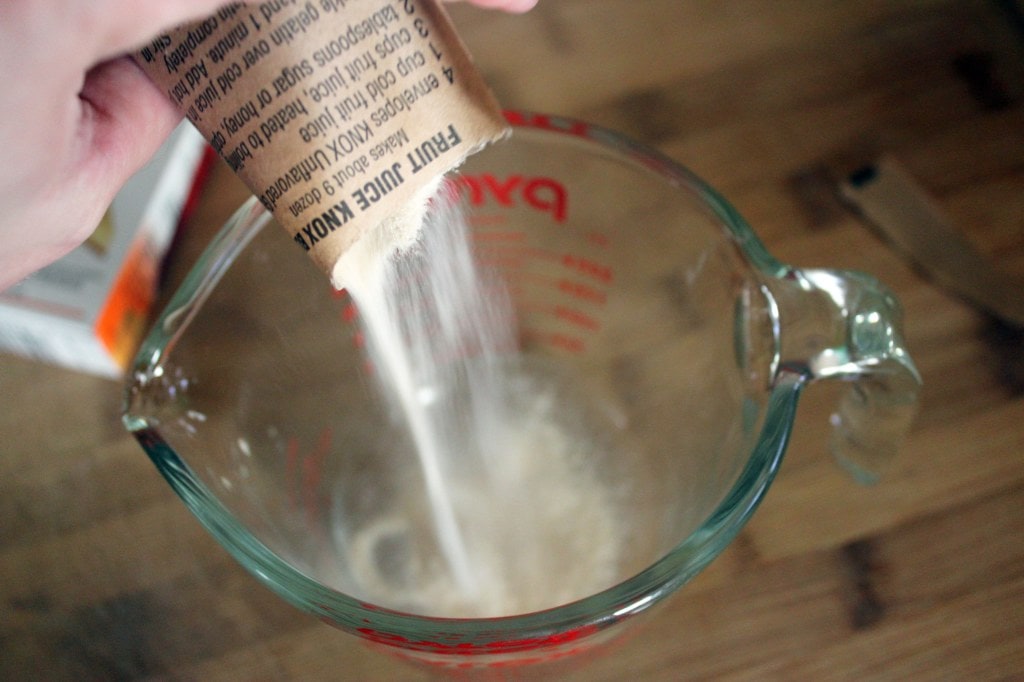 Then, we separate the egg whites and yolks.  Whites in the bowl of a mixer (or any bowl if you're using a handheld mixer).  Crack the egg, then kind of use the shell halves to coax the yolk back and forth as the white separates and falls into a bowl. 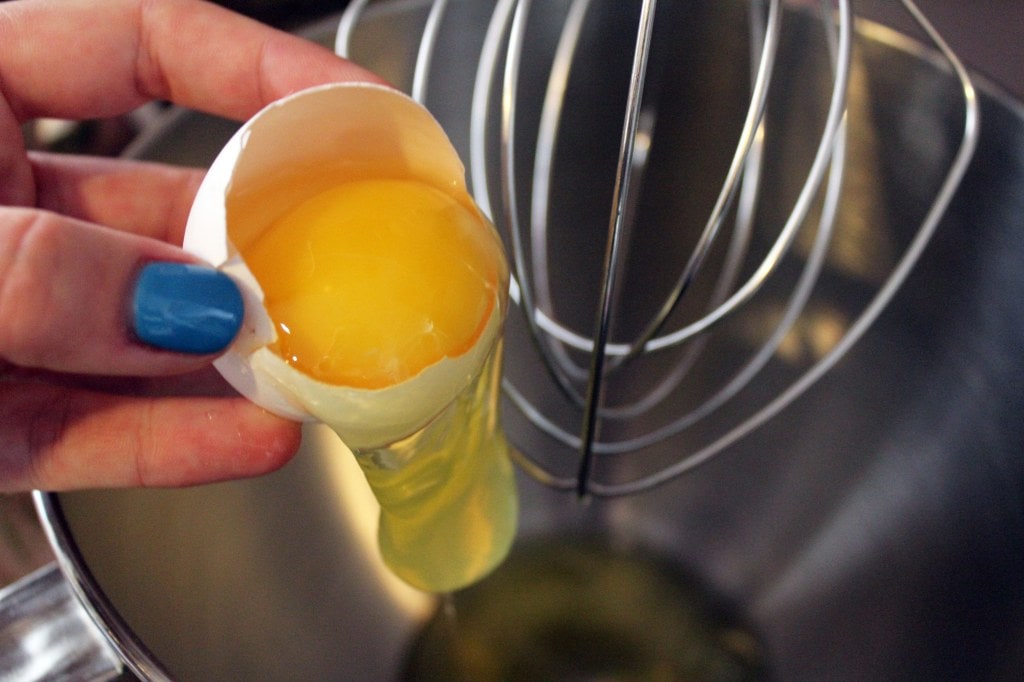 Then, we put the egg yolks in a small saucepan with the pumpkin. 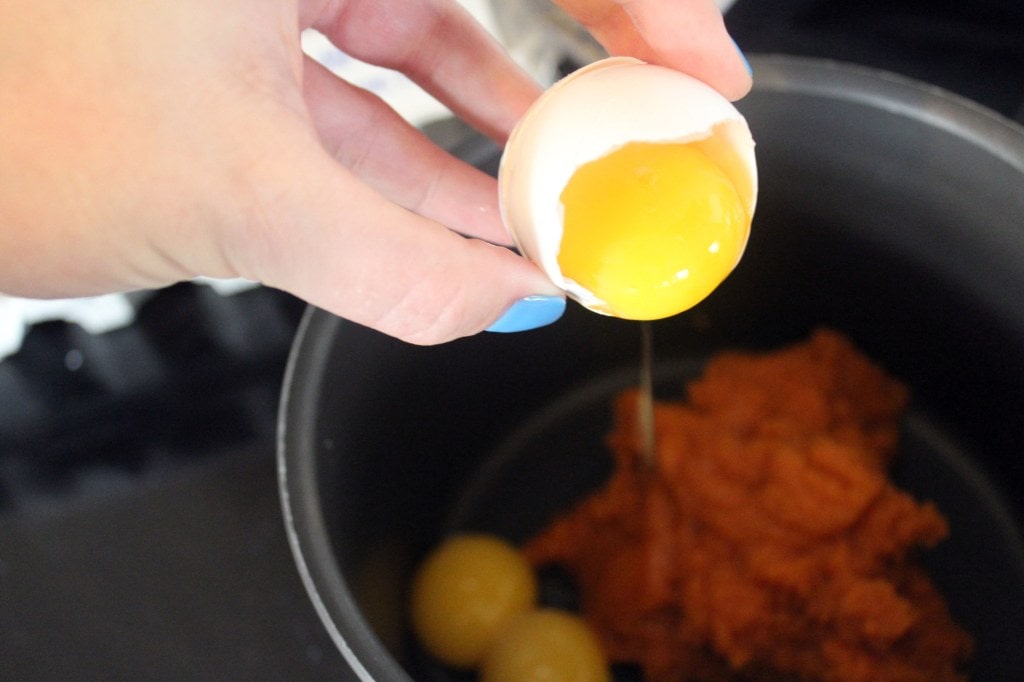 Then add half the sugar... 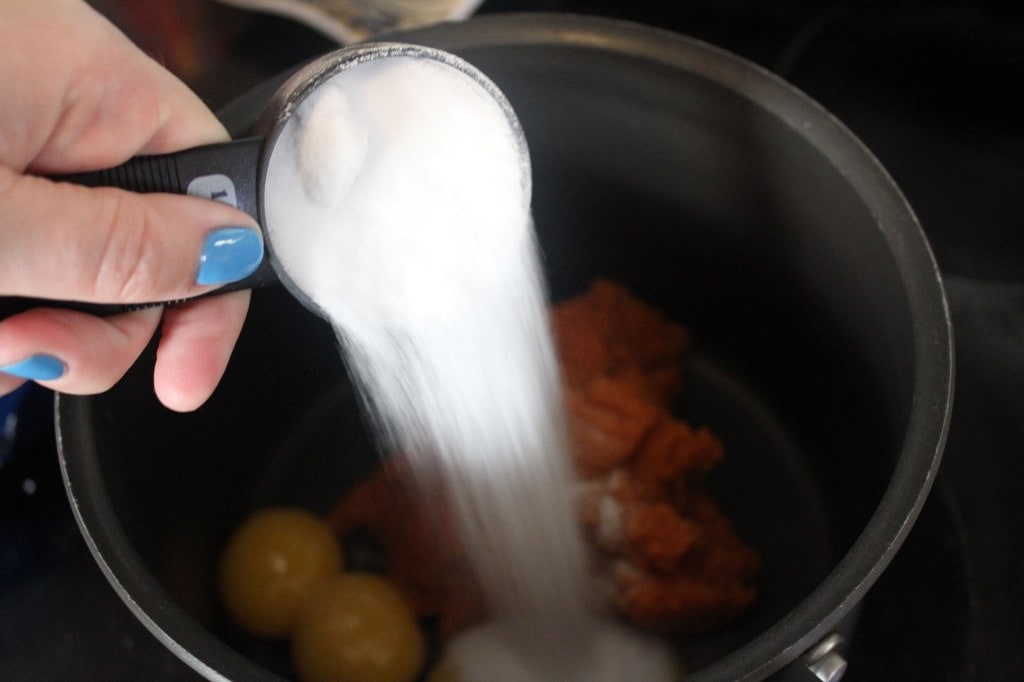 ...and dump in the milk and spices. 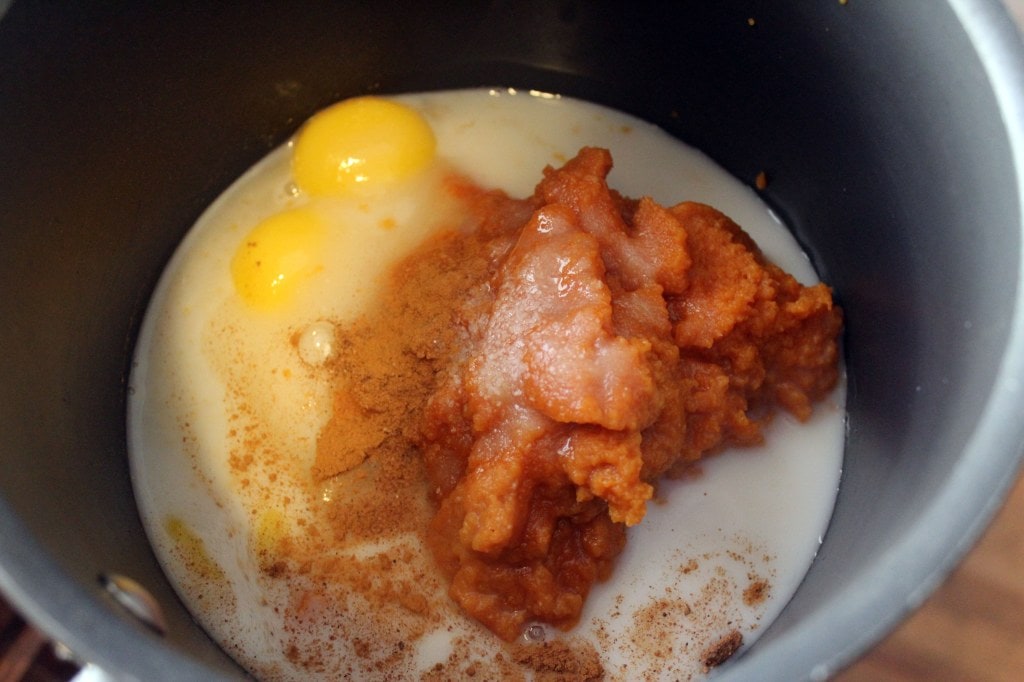 Stir the mixture all together, THEN turn the heat on the stove to medium-high, and let the mixture gently heat through.  Once the mixture is nearly boiling, stir constantly for 5 minutes, then add in the gelatin and turn off the heat.  It's important to stir constantly so that the eggs thicken the mixture but don't scramble.  Scrambled egg pie isn't something that folks are often grateful for. 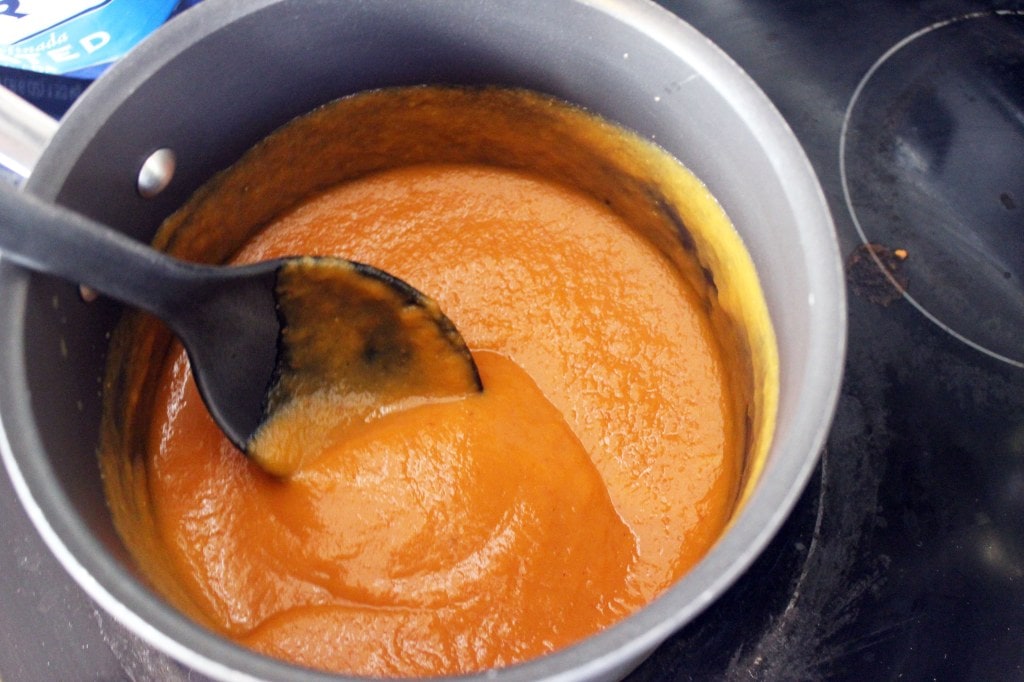 Keep stirring for a few more minutes to dissolve the gelatin, then pour the whole pumpkin mixture into a bowl to cool while you prep the egg whites. 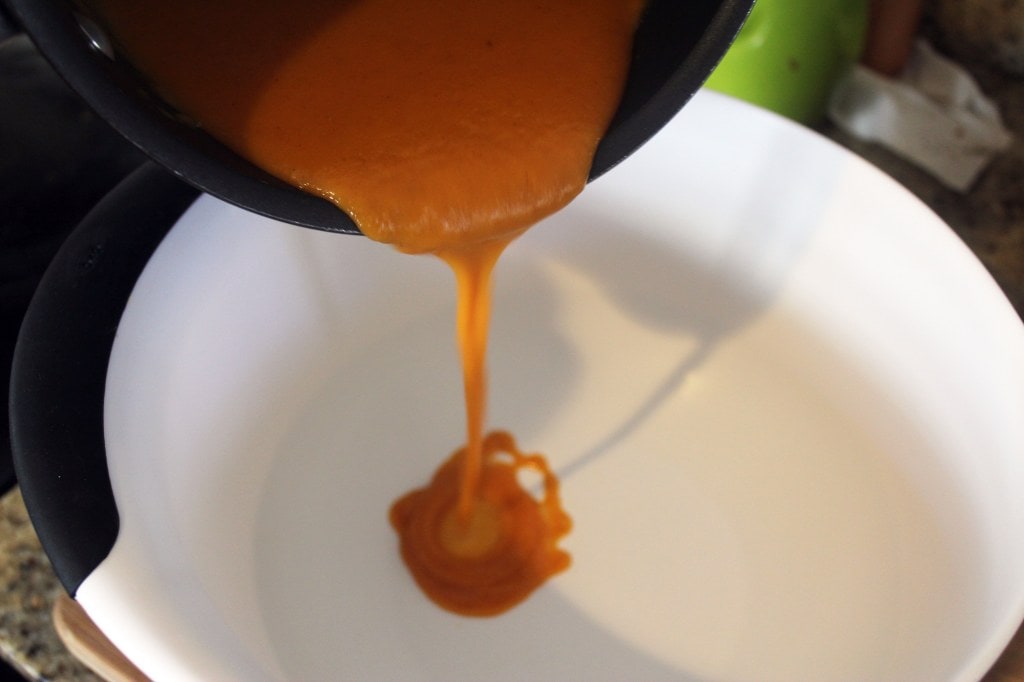 Now, onto the egg whites!  The gelatin in the pumpkin mixture helps firm up the pie, and the egg whites folded in right at the end keep things fluffy and light.  Start to beat the egg whites at a high speed for about 5 minutes until they get super duper white and fluffy and soft peaks form.  THEN, with the mixer still running, add the vanilla and slowly pour in the sugar. 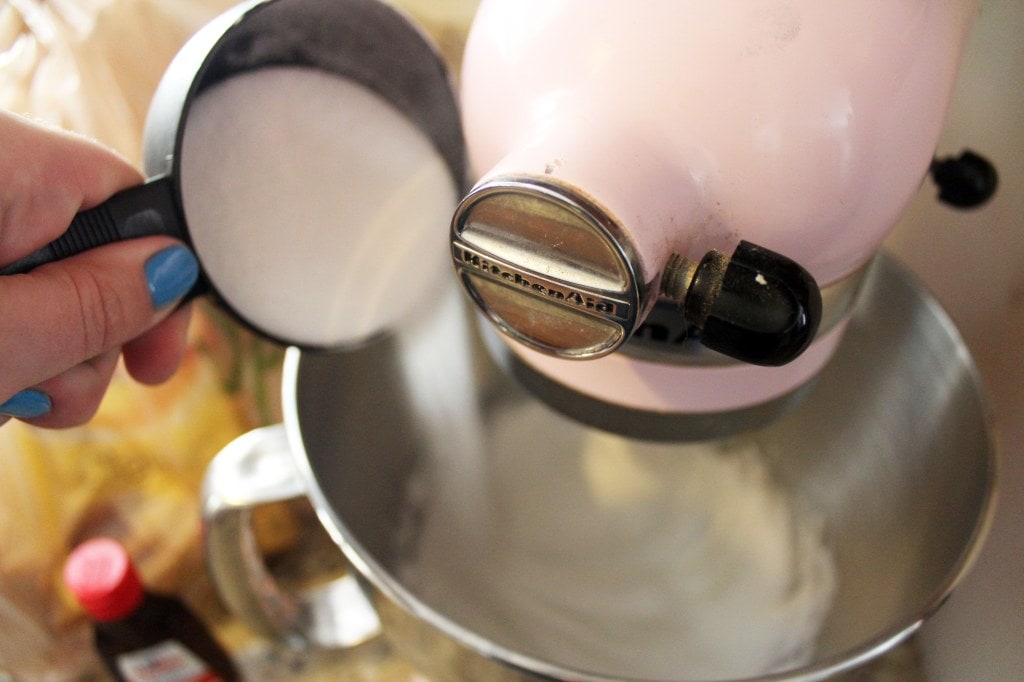 The mixture will thicken considerably in a minute or two.  When the mixture turns GLOSSY, the egg whites are done!  Glossy is key. 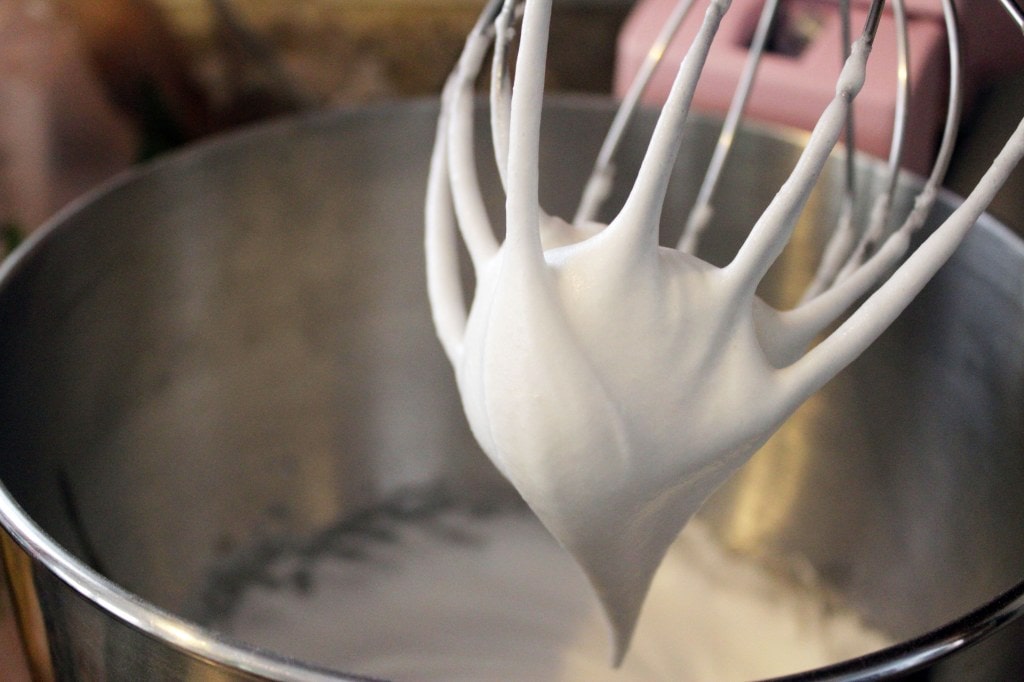 So now we have our pie crust chilling, the pumpkin mixture cooling in a bowl, and the fluffy egg whites.  Let's perform the marriage.   Add ⅓ of the egg whites to the pumpkin mixture, and VERY gently stir it together.  We want to keep as much air in the mixture as possible. 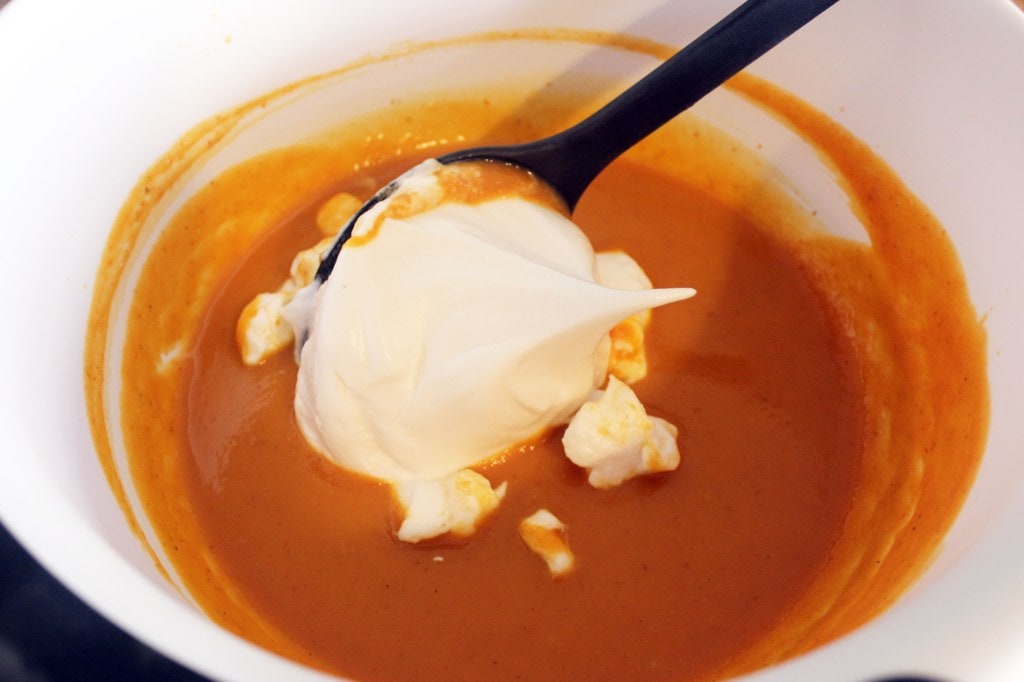 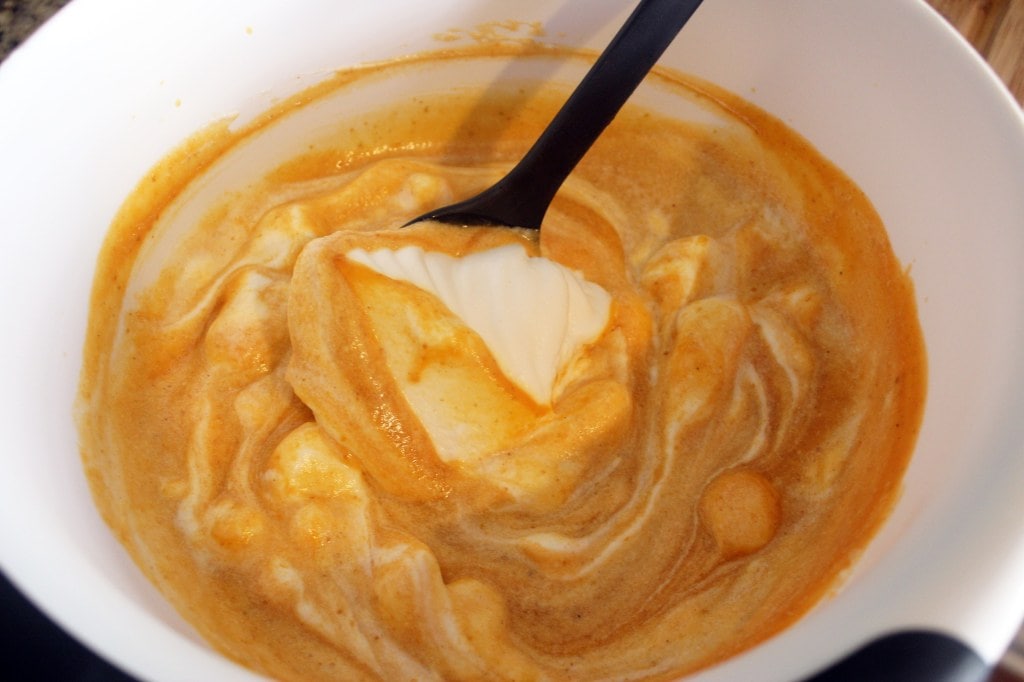 ....and stir everything together until the filling is smooth. 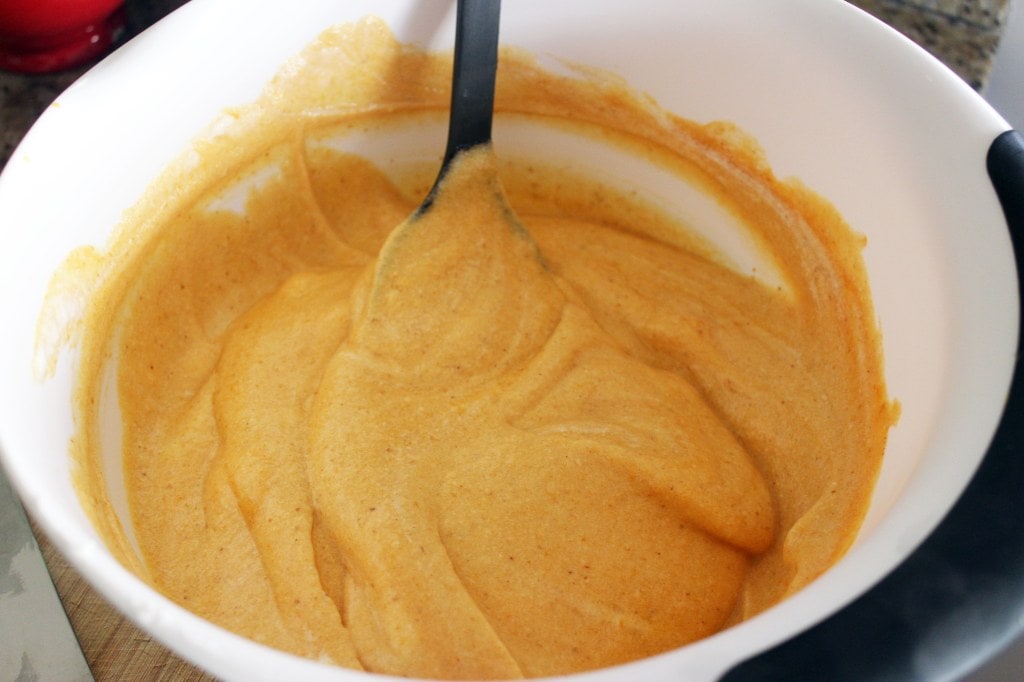 Pour it into the pie crust, chill that bad boy for at least 4 hours, and we're good to go! 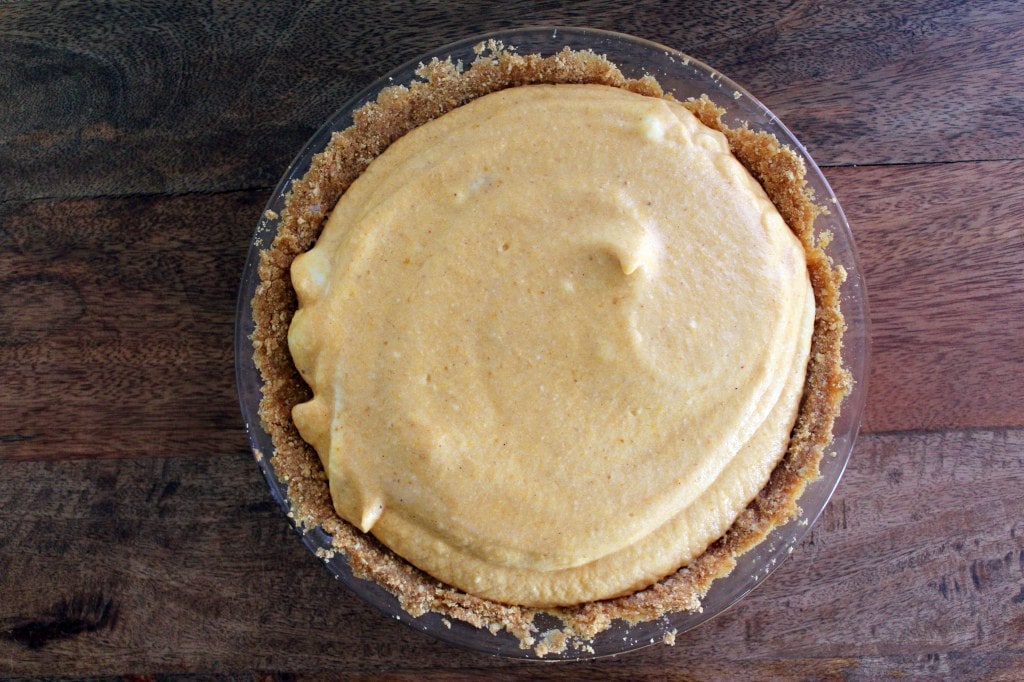 Also:  day in the life of a food blogger.  Never enough counter space! 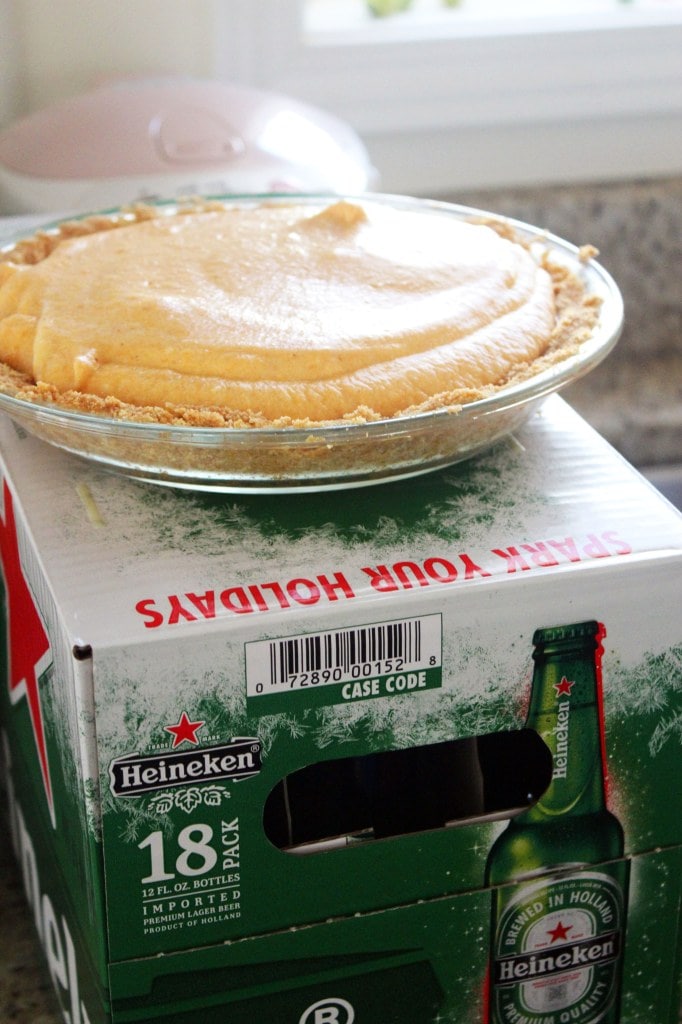 If you're not into pumpkin pie but like PSL-type flavors, this just might be the pie for you, my friends.  It's one of my absolute favorites, and I hope you'll try it this year with your family! 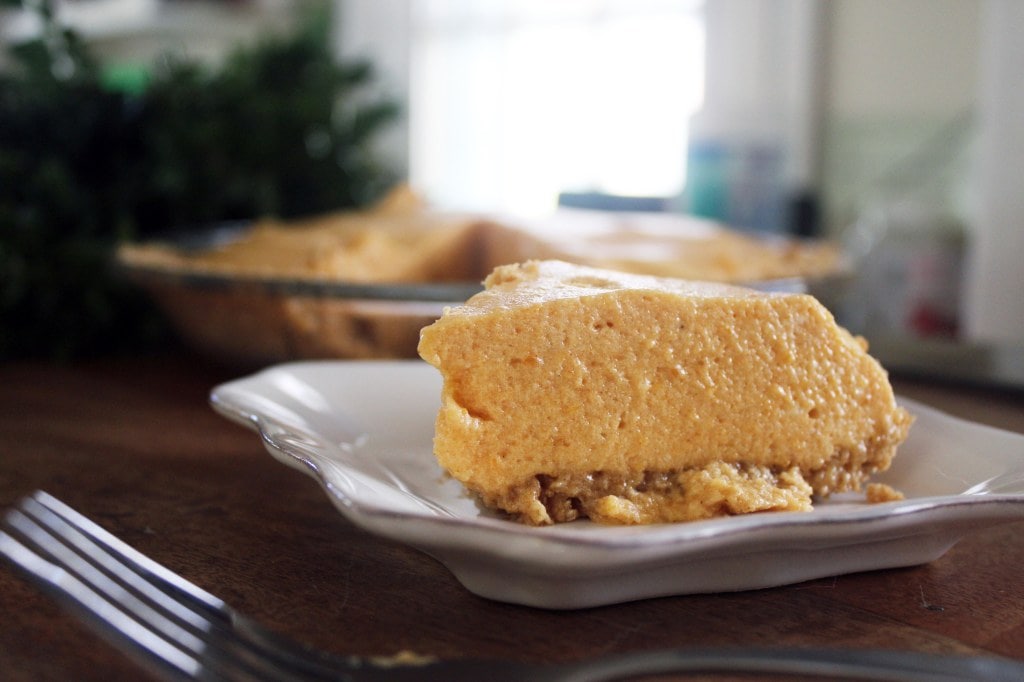