Remember when I used to write restaurant reviews?  I barely do, either.  I don't know why we stopped, we just....did.  I like recipes and stories better, but sometimes I miss the days of photographing food and talking to people online about the experiences we had.  BUT, out of all those reviews we wrote back in the early days of the blog, we never photographed anything at or wrote about my favorite restaurant in Greenville, The Lazy Goat.  Lazy Goat is part of a restaurant group called Table 301, and we actually love most of their restaurants.  This, though, is Spanish Tapas AND the head chef is a woman AND I honestly can say that in years and years in Greenville and tons of trips to Lazy Goat, we've never had ANYTHING we don't like.  So, there's your review. 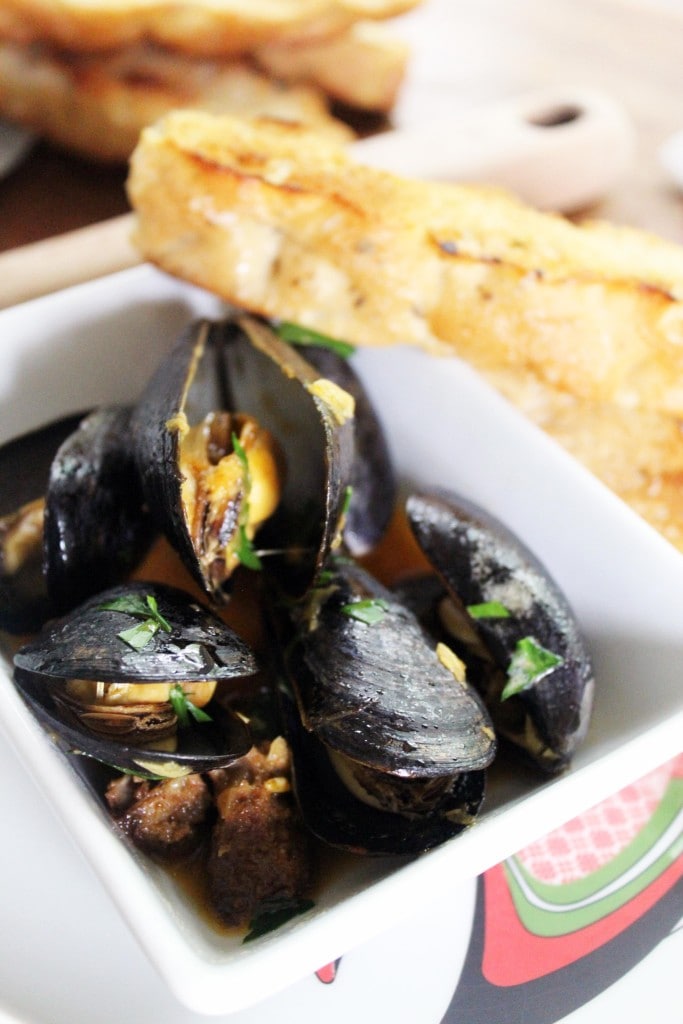 Our absolute favorite dish at Lazy Goat is mussels with chorizo.  Theirs comes in some kind of a sexy almost-but-not-quite creamy broth with cured chorizo and a parmesan crisp that gets all soaked in the broth.  The dish comes with charred bread for dipping and we ALWAYS order more because the broth is THAT good, and the salty chorizo is just incredible.  A bottle of wine for 2 plus the Goat's mussels is the best happy hour this city has to offer, IMO, and if you go on a Thursday bottles of wine are half off.

BUT THAT ISN'T WHAT THIS IS ABOUT.  Since we can't always be rushing out to fancy happy hours on a Thursday, it's really nice (and, duh, cheaper) to be able to make your own fav apps at home, amirite?  This, to me, is the perfect community appetizer.  You can prep the ingredients well in advance, then just add the mussels and steam them right in the broth 15 minutes before you'd like to serve.  Then you serve right out of the pot with glasses of chilled wine and blackened bread (maybe on the grill?) and everyone just goes for it.  Emphasis on fighting for the broth, you really don't want to miss out on that part.

So here we go.  You need butter, garlic, onion, tomato paste, white wine, saffron, chicken stock, and a parmesan rind for the broth.  If you don't have a parmesan rind just skip it - no problem at all!  When I buy any kind of expensive parmesan or other hard cheese I keep the rinds in the freezer, then thrown them in soups/broths/sauces to add a little extra salty flavor.  Try it!  You also, clearly, need mussels.  ¼-1/2 pound per person.  You'll also need bread for toasting and 2 4 ounce links of chorizo, which were .... somewhere else during this picture. 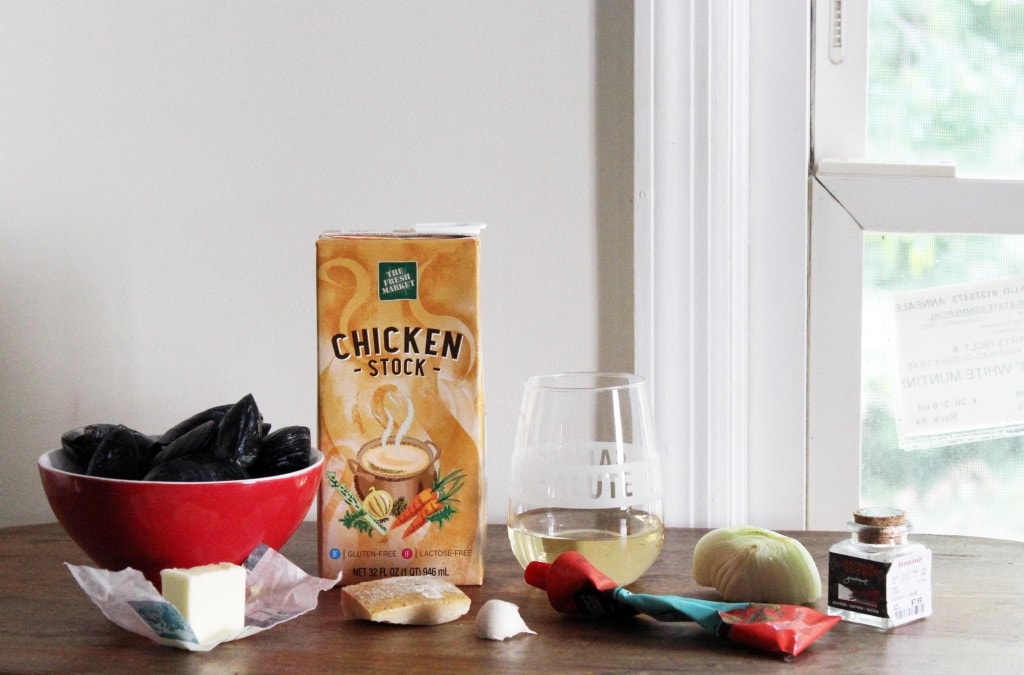 I like to make the broth and let it simmer for awhile while I work on the bread and chorizo.  Then, we cook the mussels and EAT.  So, for the broth, add half the butter into a soup pot over medium heat - we want something with a tight lid that can hold all the mussels with a little extra room since they open up while they cook.  Then, grate the onion and garlic directly over the butter.  You could chop them finely, but this way they kind of melt into the broth and that is NOT a bad thing.  Tons of flavor but no little chunks of veg, because this is really all about the mussels. 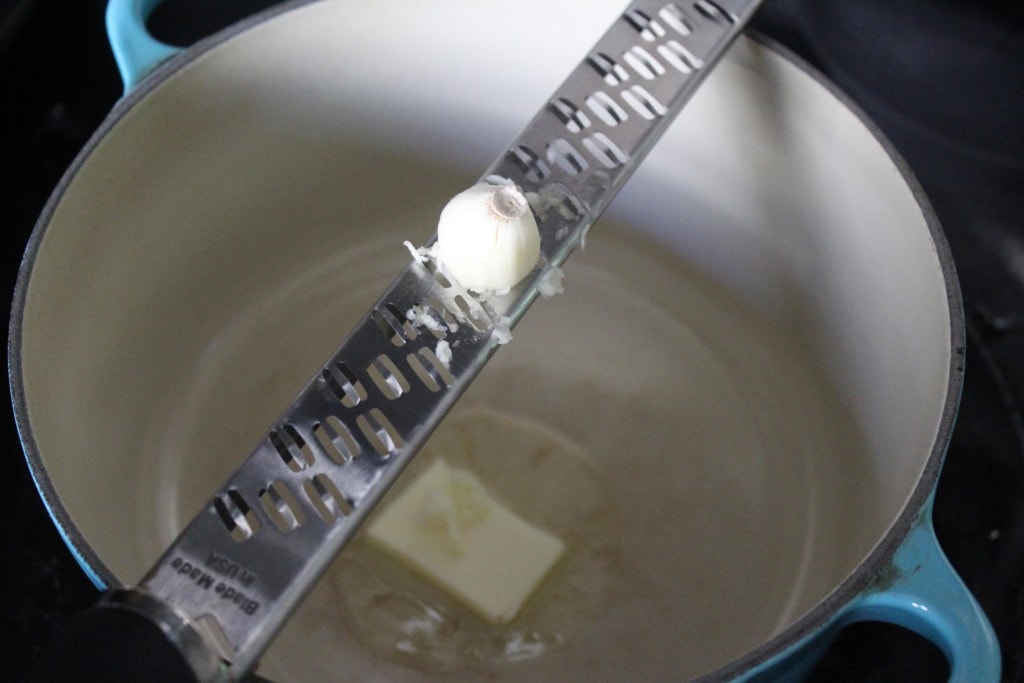 Now, let the onion and garlic cook in the butter for just a minute or two - we want them to soften but not brown at all.  Add the tomato paste to the pot. 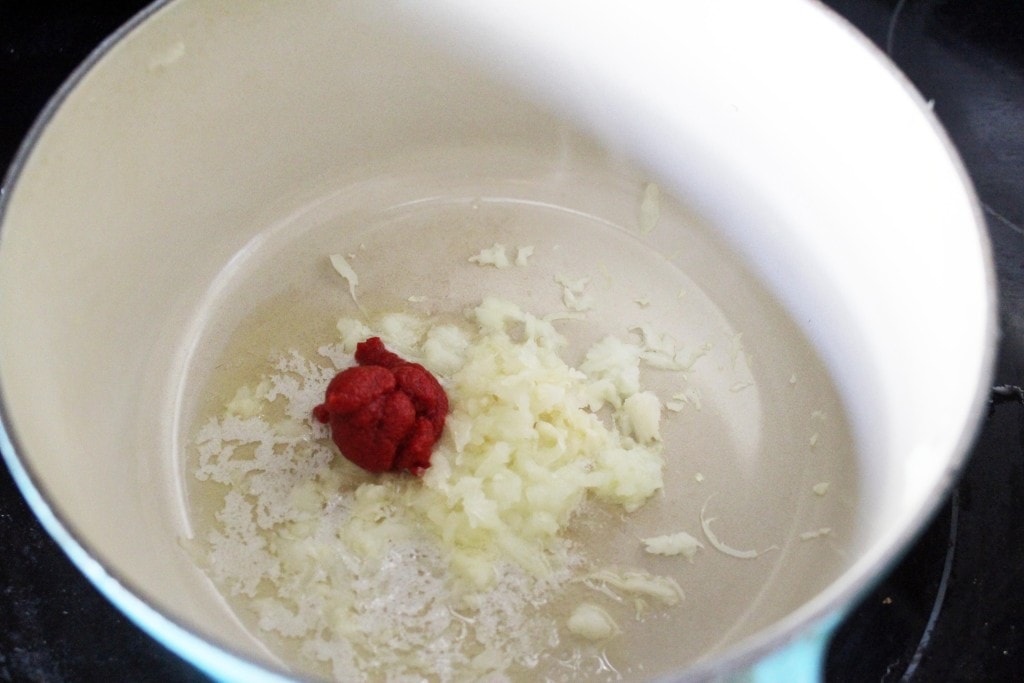 Stir the tomato paste into the butter mixture, then pour in the wine.  WINE. 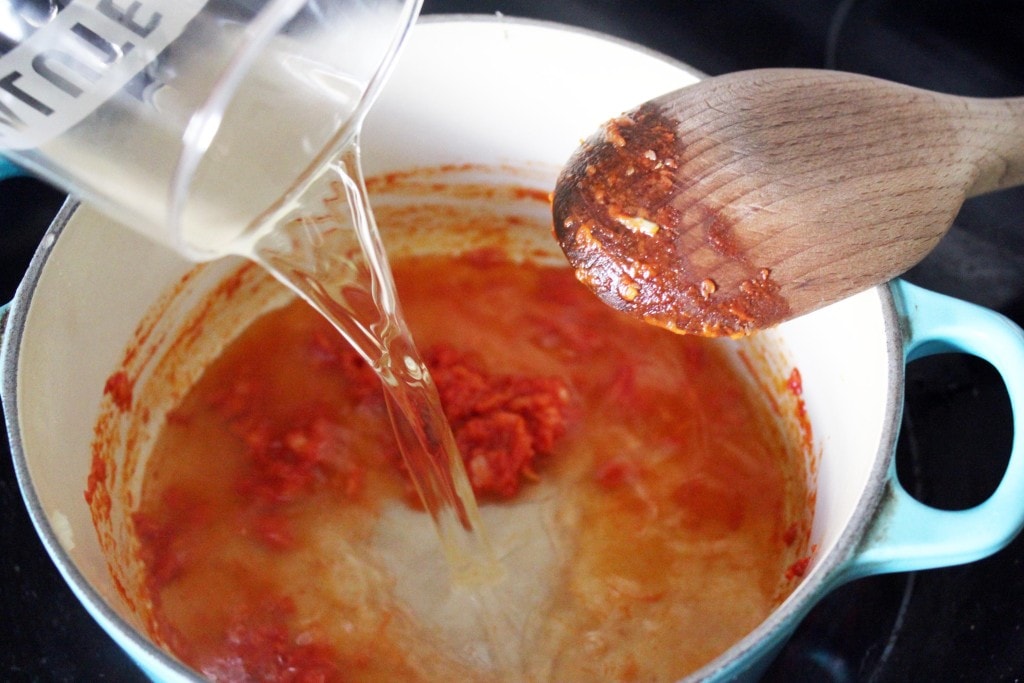 Stir the wine into the tomato paste mixture and let it come to a bubble - increase the heat a bit if you need to.  When the wine begins to reduce, add the saffron, parmesan rind, and chicken stock to the pot.  This is our broth base for the dish!  Reduce the heat and cover the pot - we want the sauce to simmer and thicken slightly while we work on the rest of the dish. 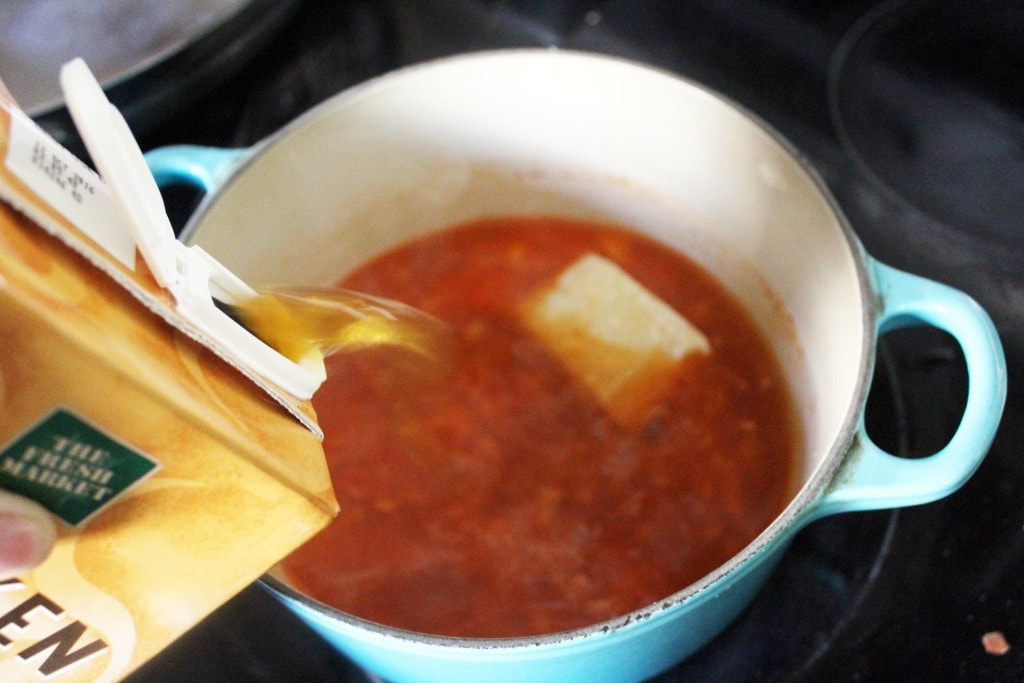 While the broth is simmering, let's work on the chorizo and bread!  Chorizo comes in about a gazillion different forms, but the key is to get Spanish-style chorizo.  The chorizo can be uncured, like Italian sausage, or it can be cured, which makes it more like a salami.  I actually prefer cured Spanish chorizo, but that was nowhere to be found when I was shopping for these bad boys. 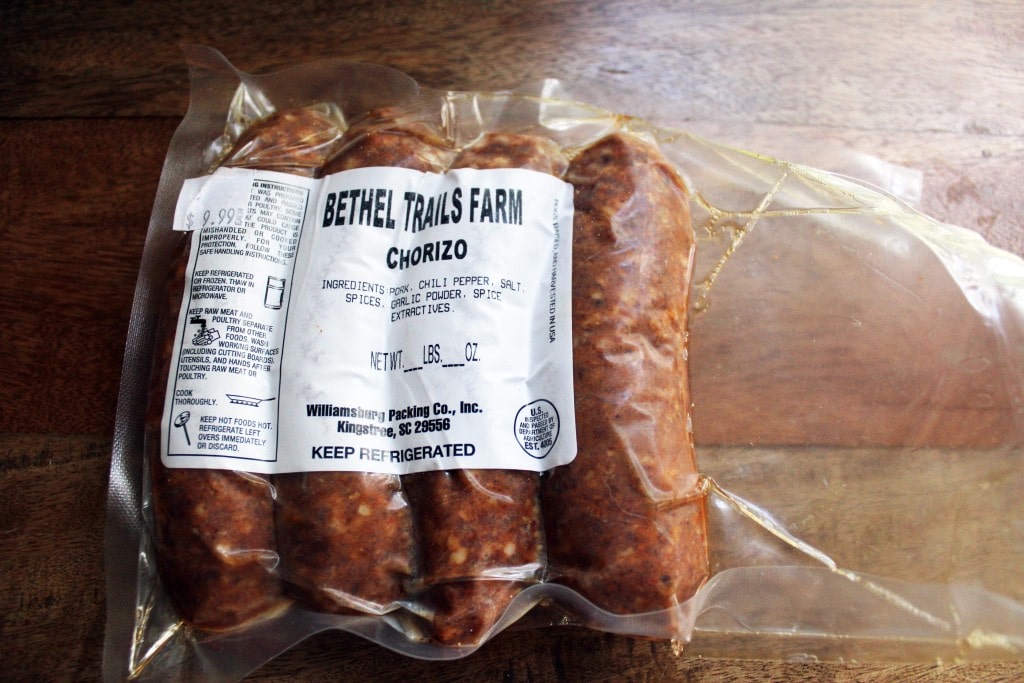 So, long story long, because I had uncured chorizo which is slightly soft, I cooked it twice to get it nice and crispy before it went into the mussels.  If you find cured chorizo just skip this step.  Halve the chorizo lengthwise, and let it crisp for abut 2 minutes on each side.  It won't be cooked through, but this will help the chorizo hold together a bit. 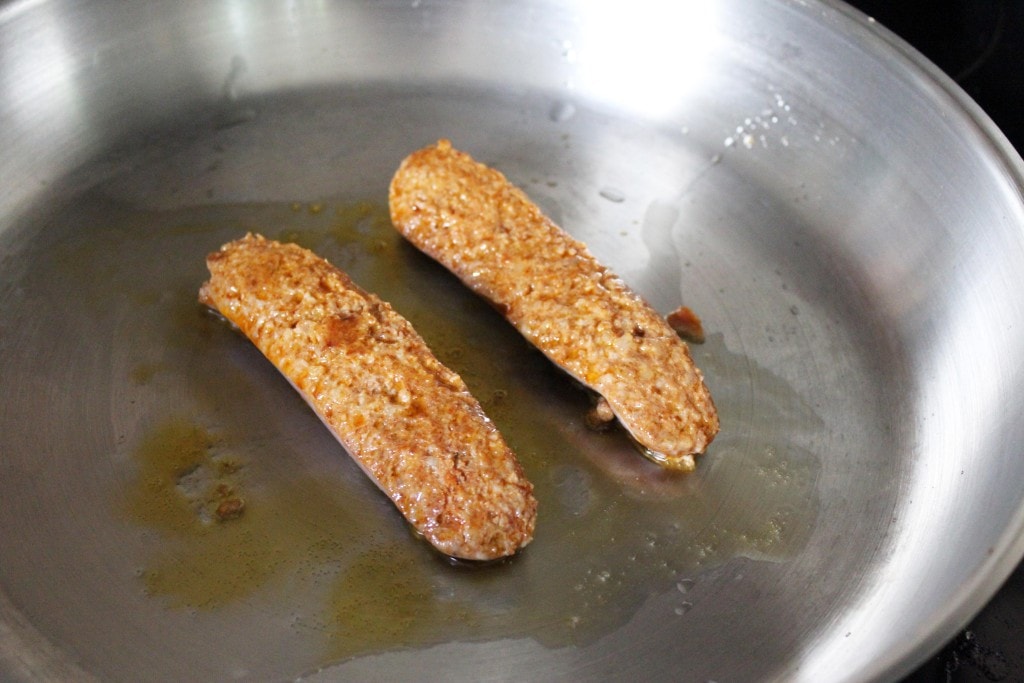 Remove the chorizo from the pan, then quickly cut it into cubes. 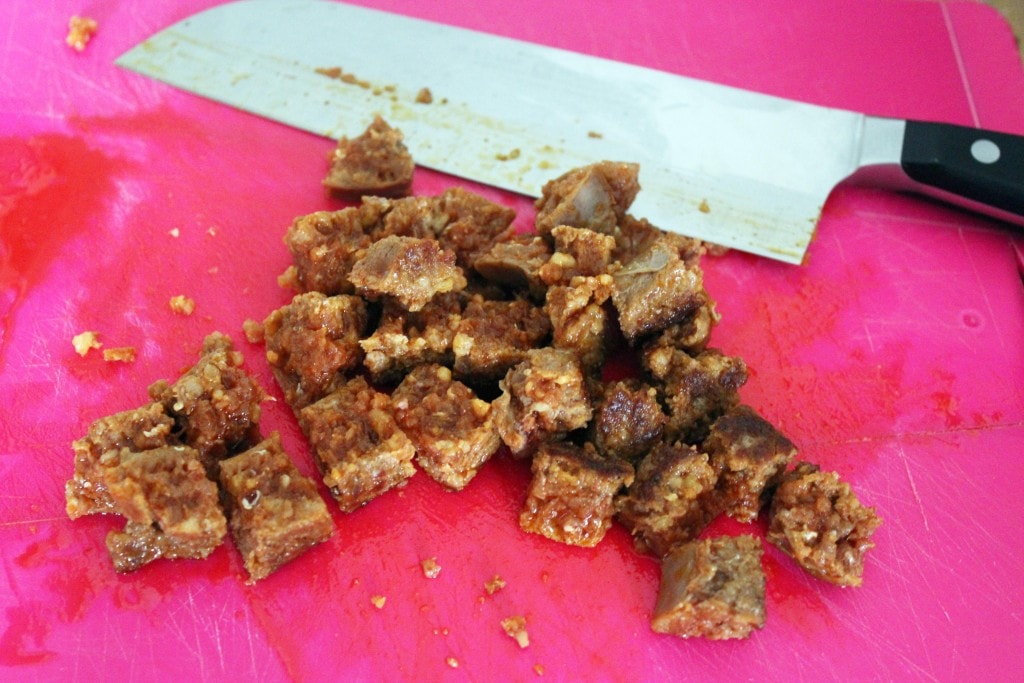 Add the chorizo BACK to the pan, and crisp it on all sides for about 5 more minutes until it's cooked through, then remove the chorizo to a plate.  NOW, I did all this because I wanted the chorizo in pretty little cubes, but you could TOTALLY skip it and crumble and brown the sausage and move on with your life.  I'm complicated. 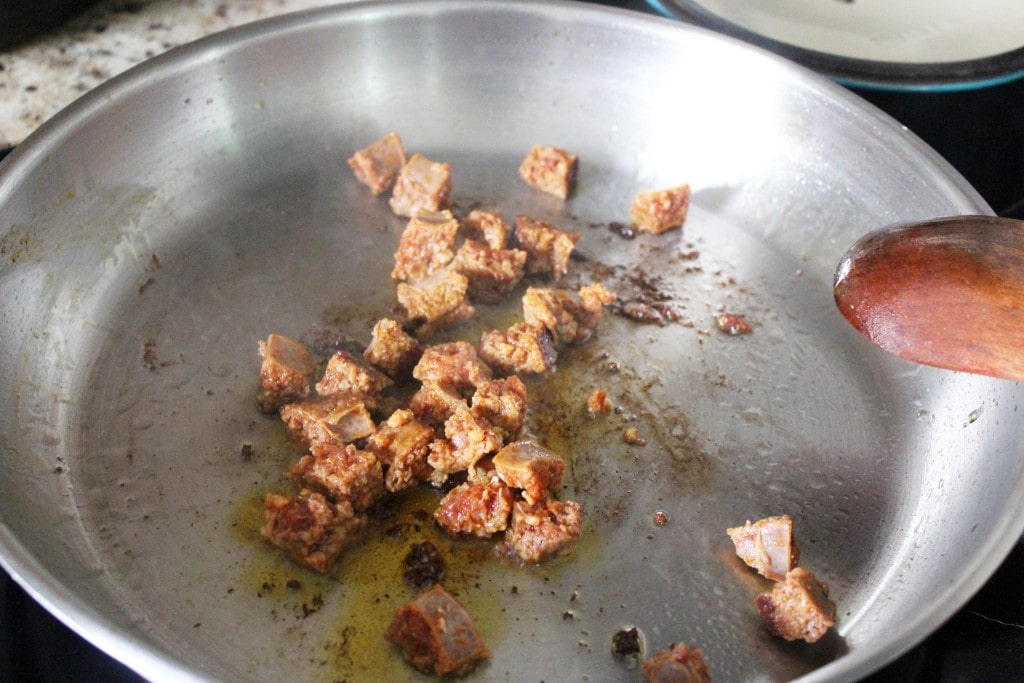 When the chorizo is done, add the bread to the same skillet and toast the bread, get this, IN THE CHORIZO DRIPPINGS.  Yep.  Or broil your bread, or toast it, or grill it....but seriously do the thing with the chorizo drippings. 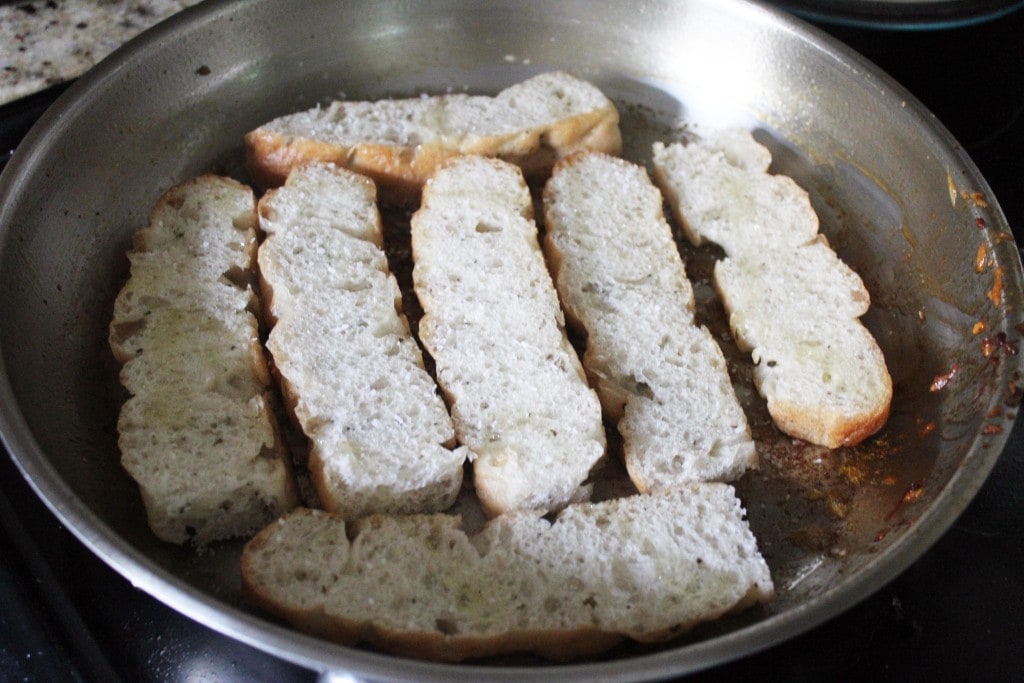 So NOW let's get back to our broth, which has simmered nicely at this point.  Add the mussels to the pot. 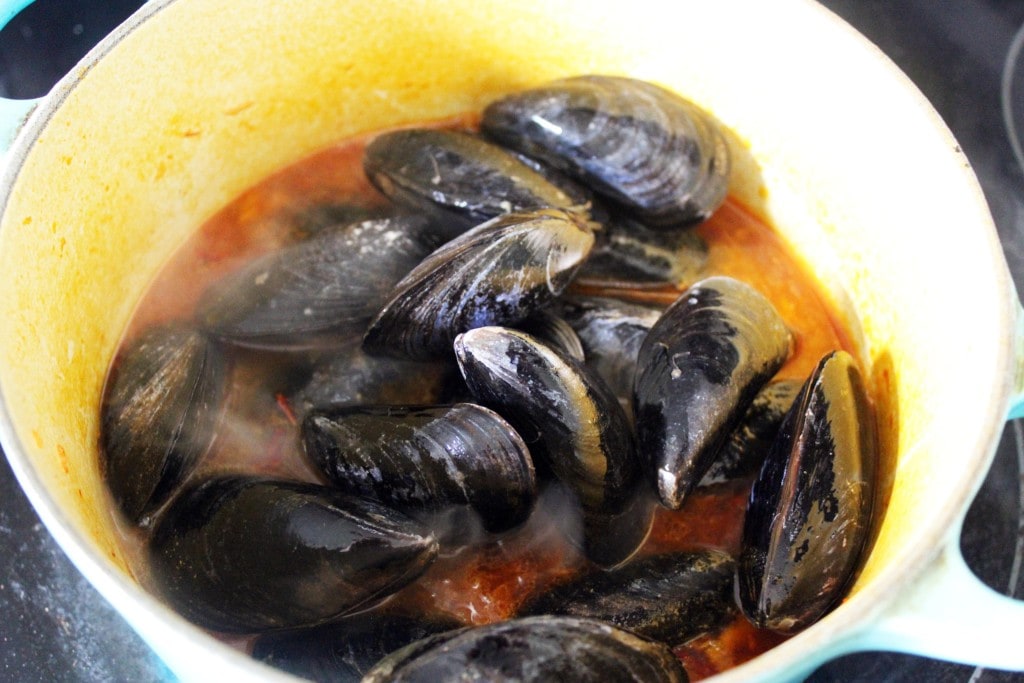 Cover the mussels, and increase the heat to medium-high.   Let the mussels steam for 10-15 minutes until most of them are open, then add the chorizo and the rest of the butter back to the pot. 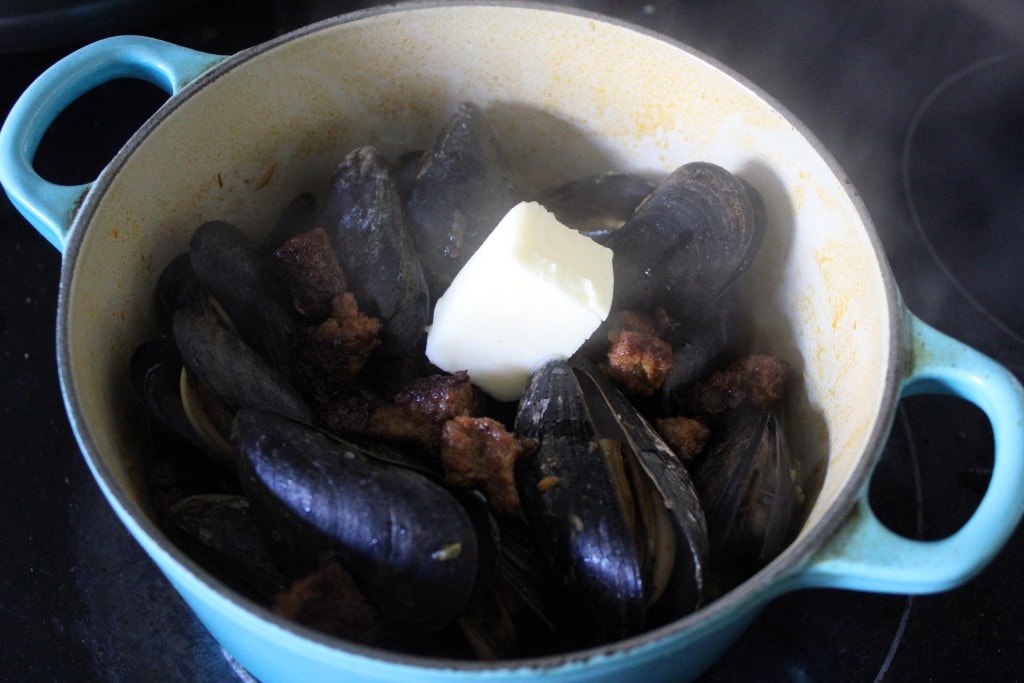 Re-cover the pot for 3-5 more minutes until the mussels are cooked and the butter has melted.  If any mussels haven't opened after this point throw them out - they might make you sick and shellfish sick is a special kind of sick.  Avoid. 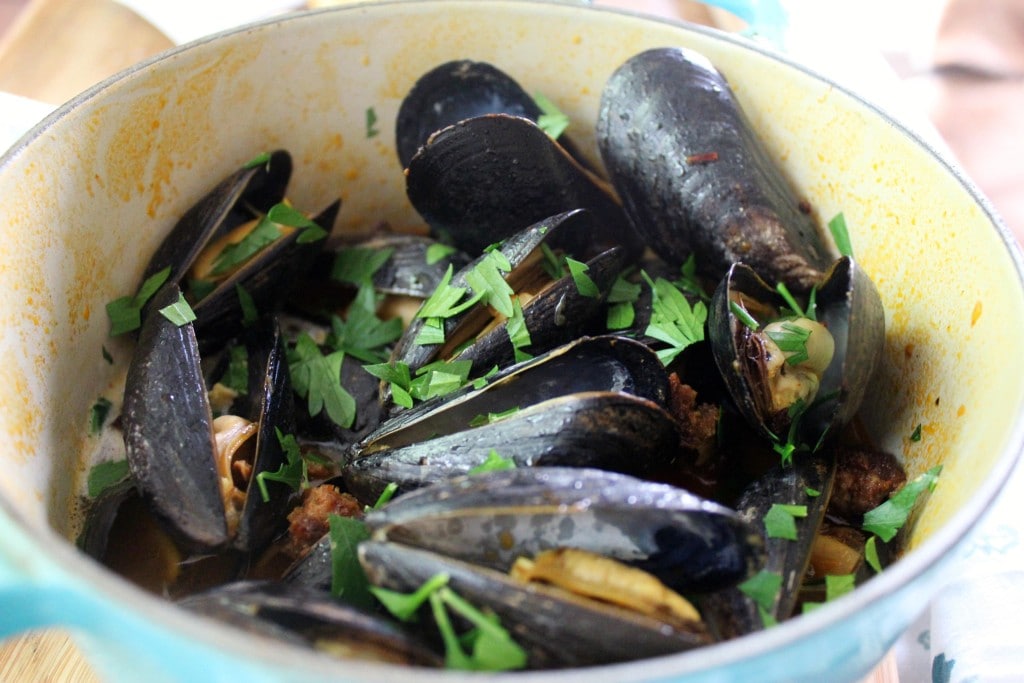 Sprinkle on some parsley, and MUSSELS.  It's time. 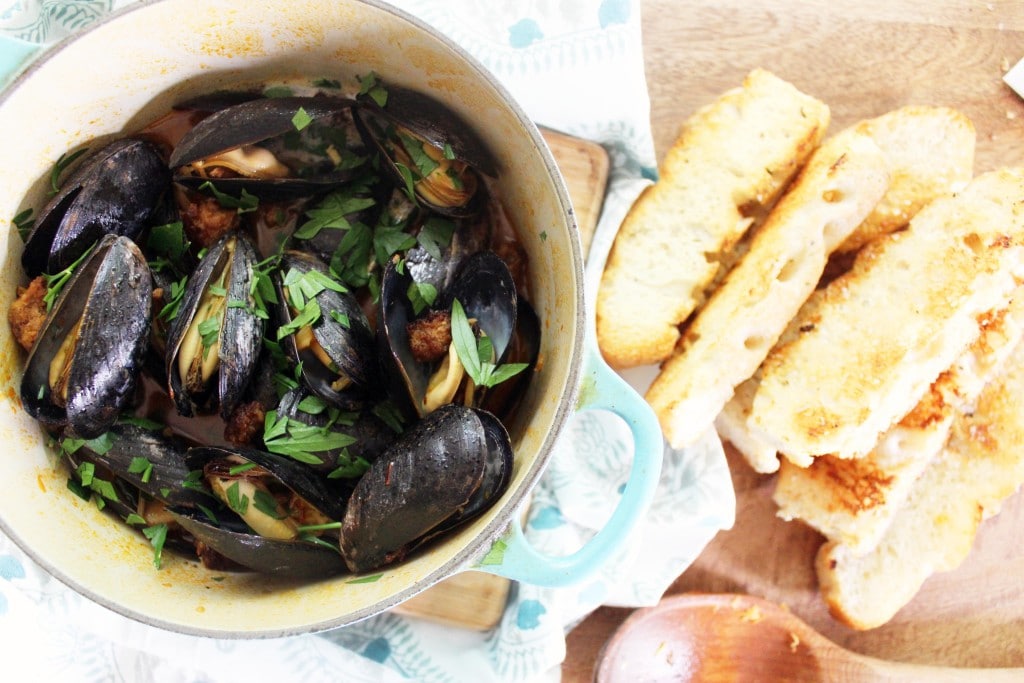 Toss the bread on the side of the pot and it's time to eat - no serving necessary unless you'd like to use little dishes.  If you go the little dish route, just be SURE to spoon tons of the broth over each serving. 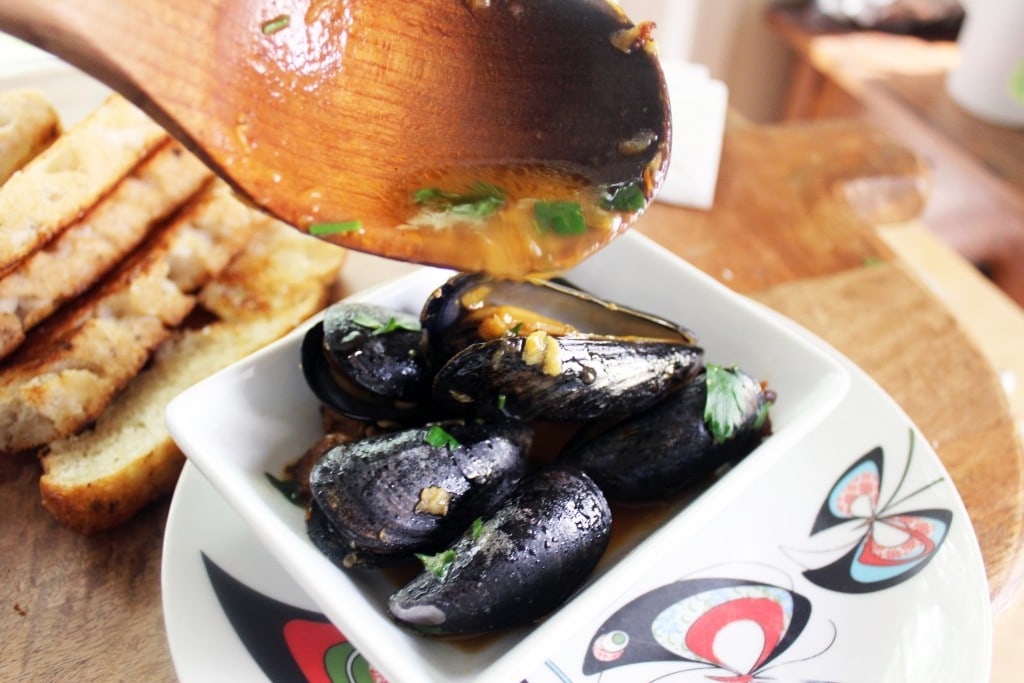 That's it, guys!  It's like summer in an effing pot, and the flavors are ridiculously good.  It makes me think we should all move to Spain post-haste, amirite? 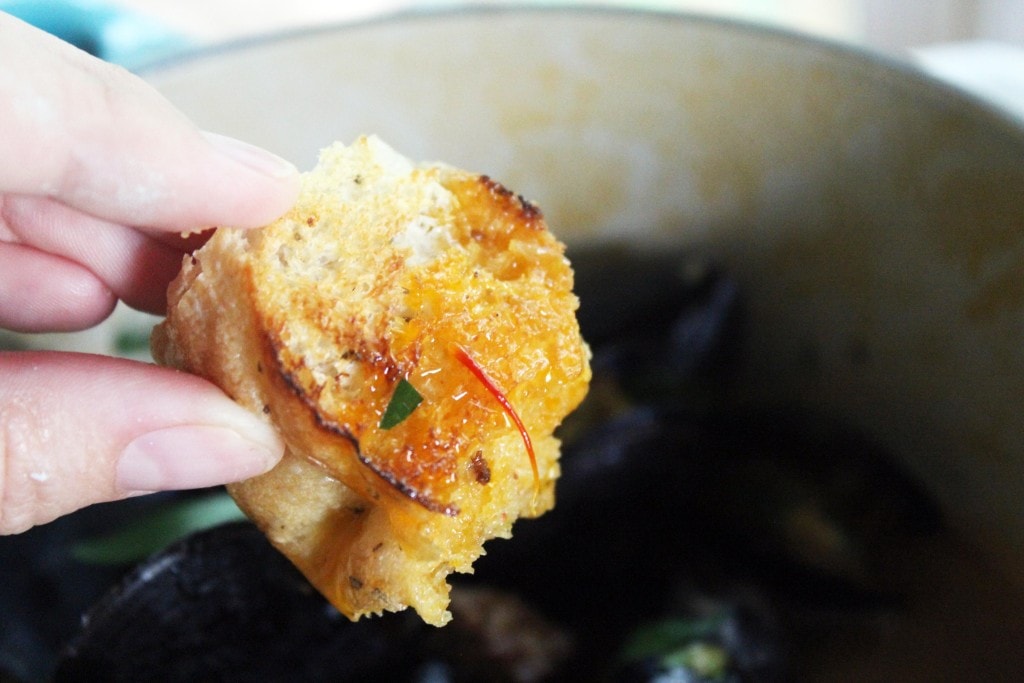