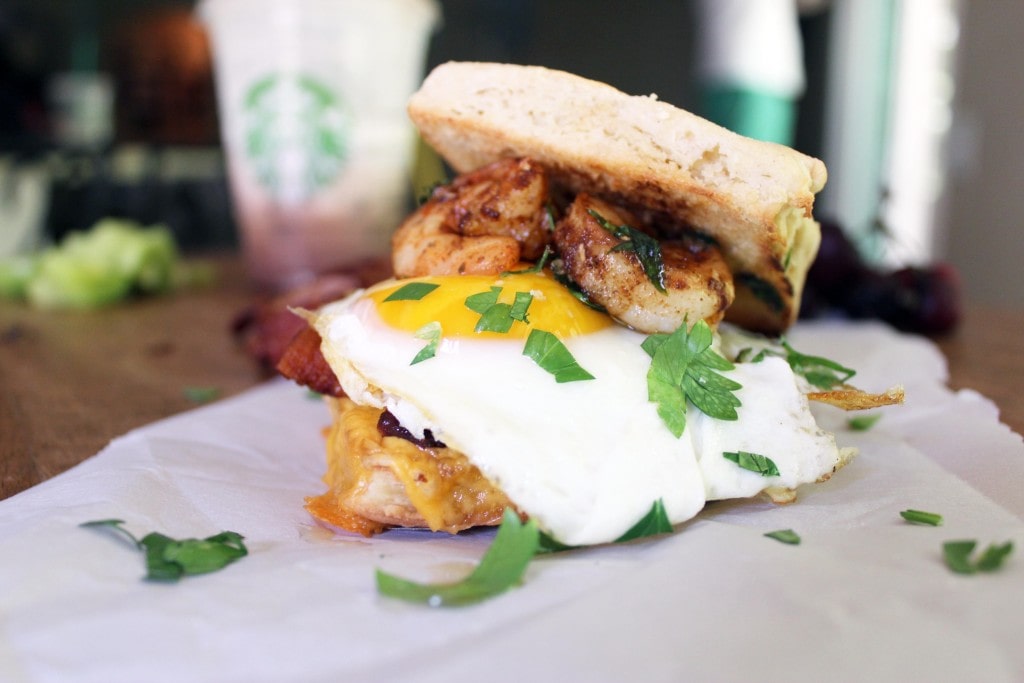 Red Lobster can .... well, they can keep their delicious biscuits and I'll leave them alone.  BUT, I made a breakfast sandwich on a homemade biscuit with all the flavors of a cheddar bay biscuit plus some seafood plus some bacon plus and egg and HOLY SHIT YES WE WIN EVERYTHING.

It was Jay's idea, as all the good ideas are.  He loves eggs and loves shrimp and those biscuits were just screaming for both.  We originally had thought about flavoring the biscuits themselves, but I really wanted a plain biscuit recipe to have for various applications and then a separate sandwich that was delicious and tasted like those chemical-laden Red Lobster beauties we all know and love.

When's the last time you were in a Red Lobster?  I can honestly not tell you when I was, but I'm pretty sure it was before I met Jay, and I feel almost as confident that he hasn't been to one the whole time we've been together.

Still, though, everyone knows about the biscuits, amirite?

For these you'll need biscuits, obviously.  Now, you can make your own using the recipe from Monday, or you can buy some frozen or in a can or already baked and go to town.  Zero judgement from me, friends.  You'll also need eggs, cheddar, bacon, shrimp, butter, parsley, garlic, cayenne pepper, and Old Bay or some other kind of seafood seasoning.  Interestingly, there is NO seafood seasoning in the restaurant biscuits - just parsley and garlic and onion powders and cayenne in most recipes I found.   But, since we're using actual shrimp in this I decided to totes go for it. 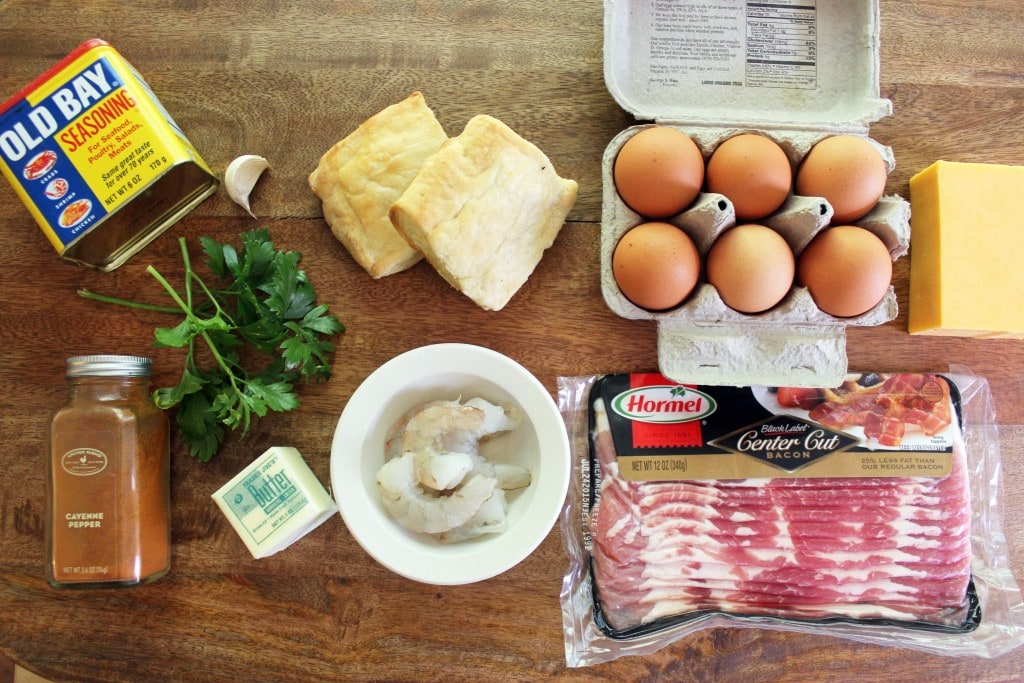 There's kind of a lot going on here, but it's all super simple.  We have to make the bacon, make the shrimp, make the egg, and melt the cheese on the biscuits.  So, it's probably helpful to at the very least have the biscuits made before you start all of these. For prep, we'll slice the cheese, mince the garlic, and chop the parsley. 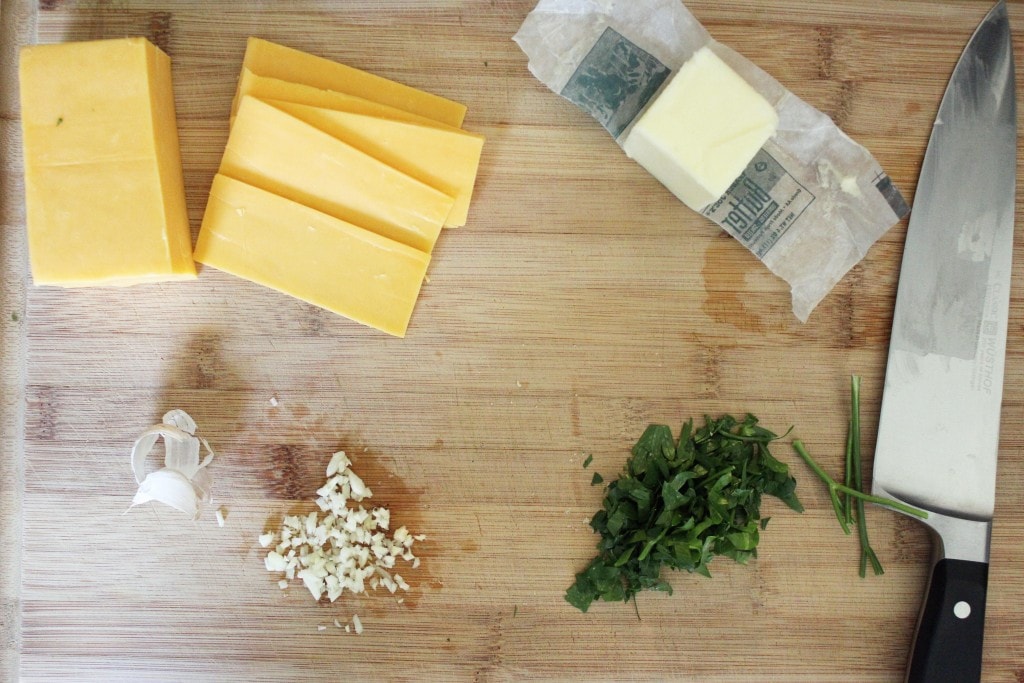 Now, I like to start the bacon first, then deal with everything while that's happening.  So, cut your bacon in half and place it in a skillet over medium-high heat.  Flip it after about 4 minutes when it starts to crisp on the first side. 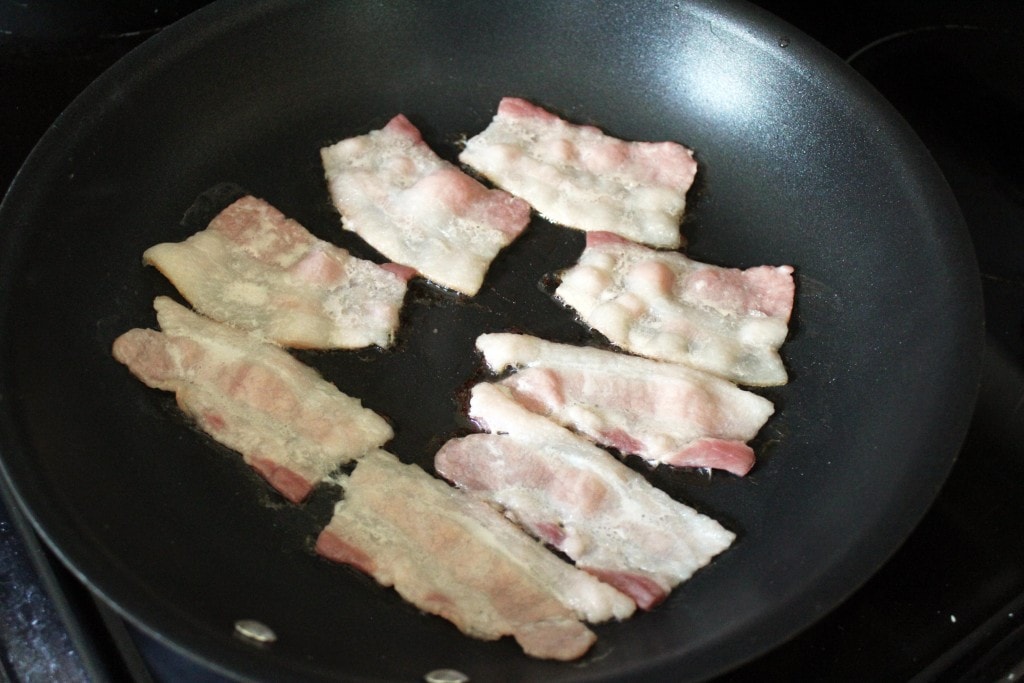 While the bacon is working, preheat the broiler to high and halve and toast the biscuits.  Then, turn OFF the oven, layer one half of each biscuit with cheese (the bottom half), and place the pan back in the oven. 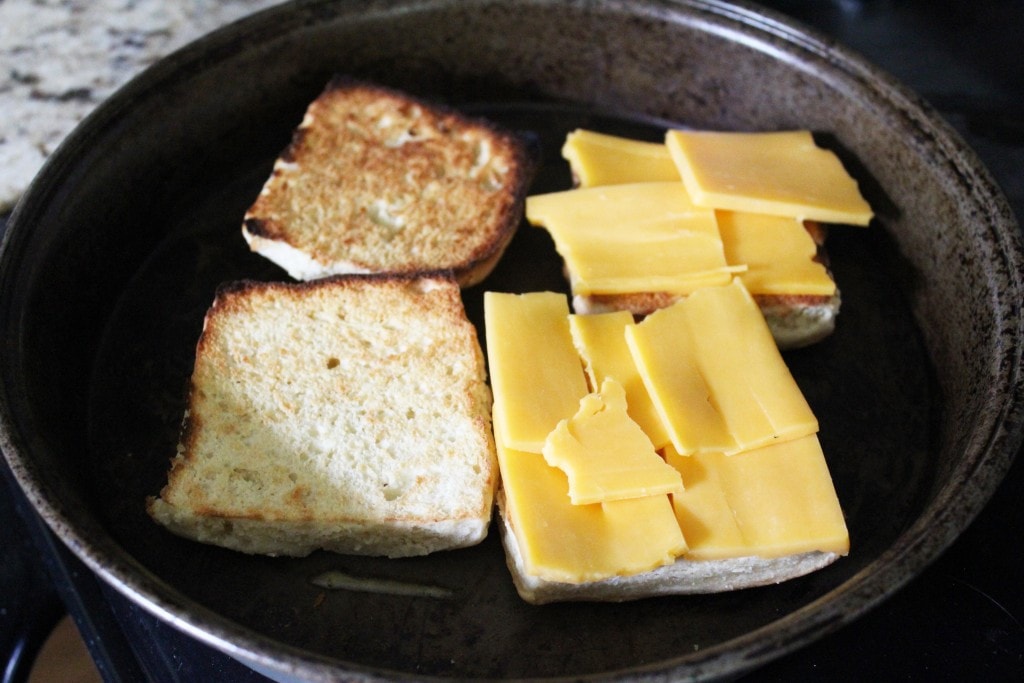 The biscuits will stay warm and the cheese will melt while you prep the rest of the sandwich components, but the top of the biscuits won't burn under the broiler. 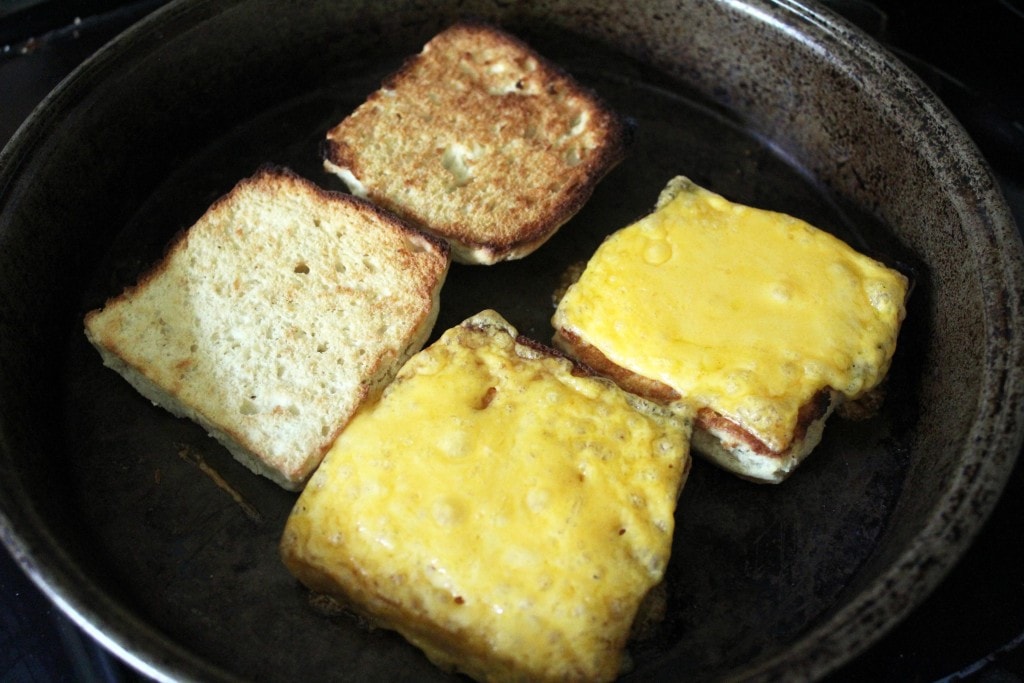 When the bacon is crisp, remove it to paper towels to drain.   At this point, go ahead and start cooking your eggs however you'd like - I did mine in a teeny skillet sunny side up for Jay - crispy on the bottom, runny yolk. 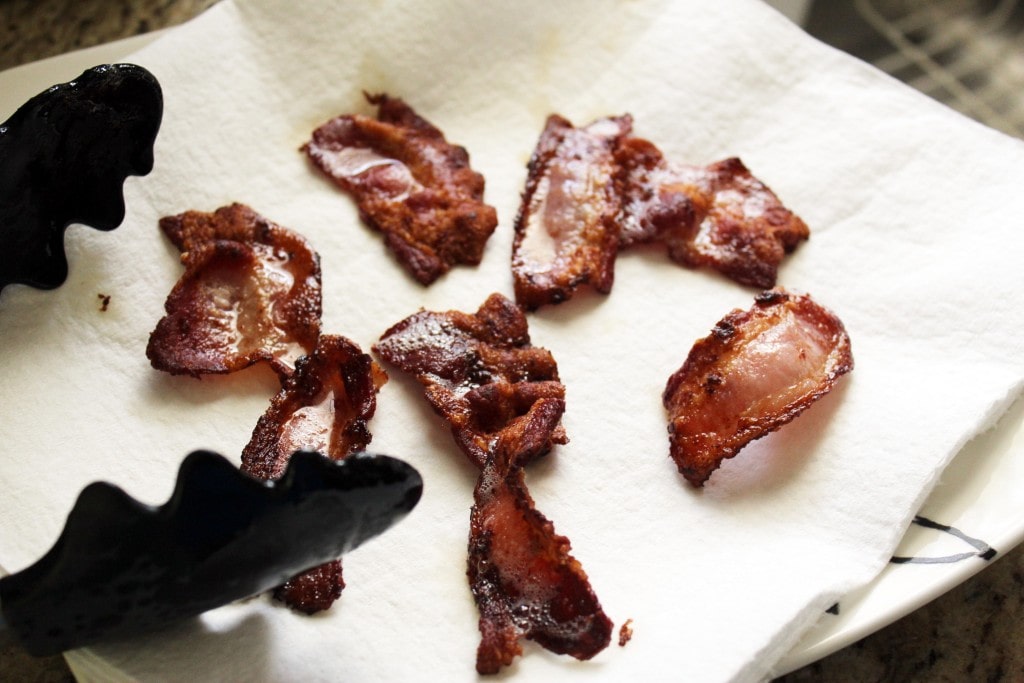 So now we have cheese melting in a warm oven, bacon draining, and eggs cooking.  Let's return to the bacon skillet!  Drain off the drippings, and add the butter and shrimp. 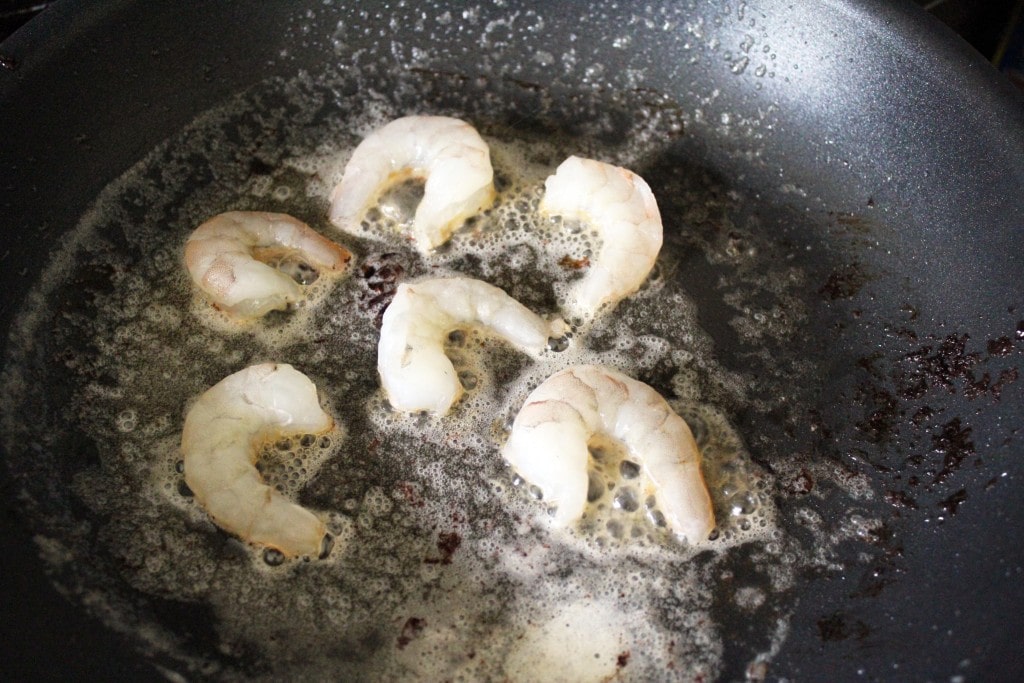 Cook the shrimp for about 2 minutes, then flip it and add the seasonings, garlic, and parsley.  Stir the shrimp for 1 minute more, then turn off the heat. 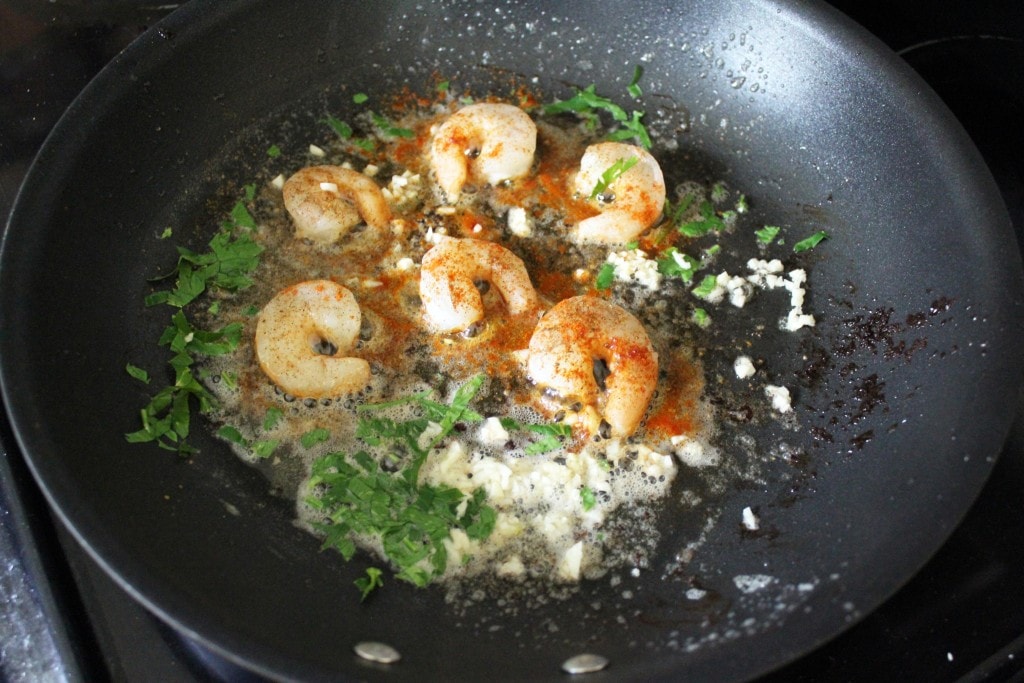 Now, we assemble!  On the cheesy half of the biscuit, pile up some bacon.  Put some shrimp on the top half. 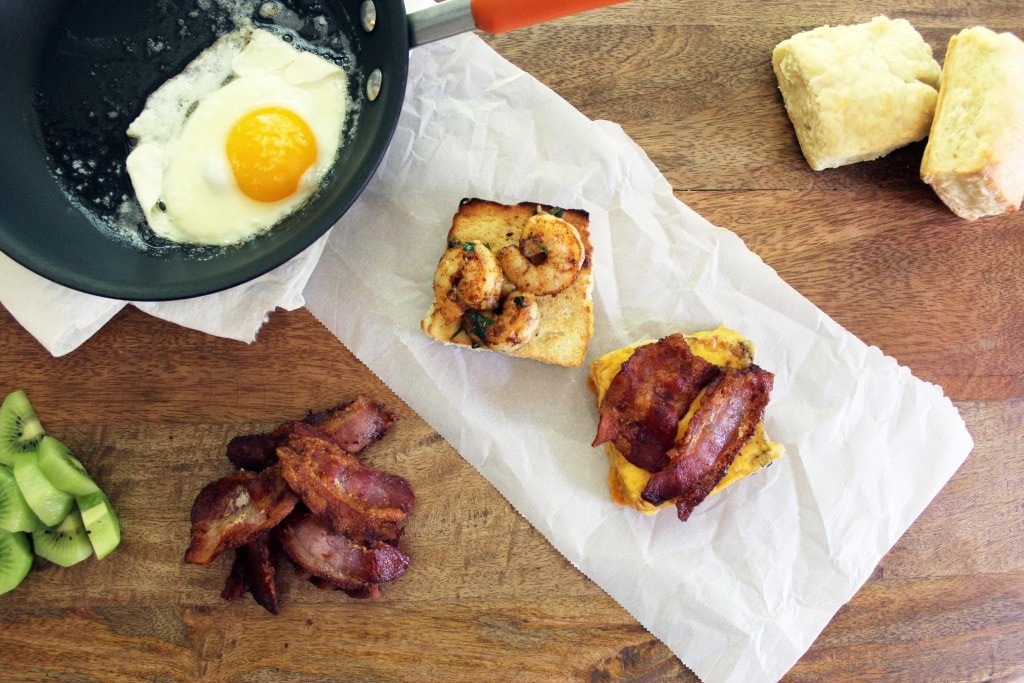 Then, slide the egg right over the bacon. 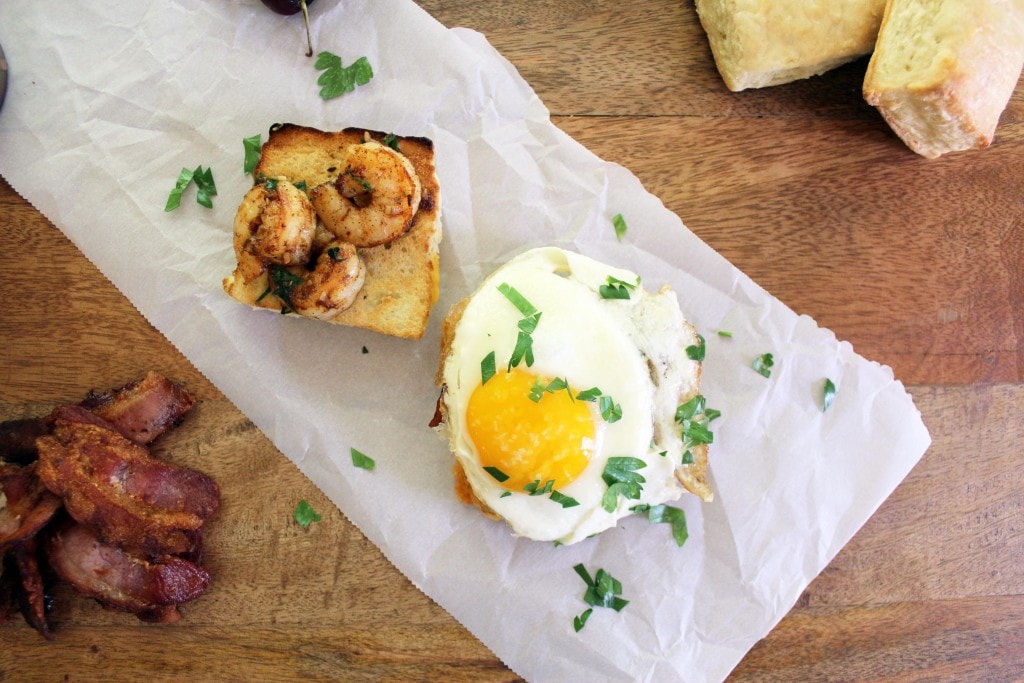 Carefully flip the shrimp half over the egg (or just place shrimp on the egg, it clearly makes no difference), and we're ready to eat! 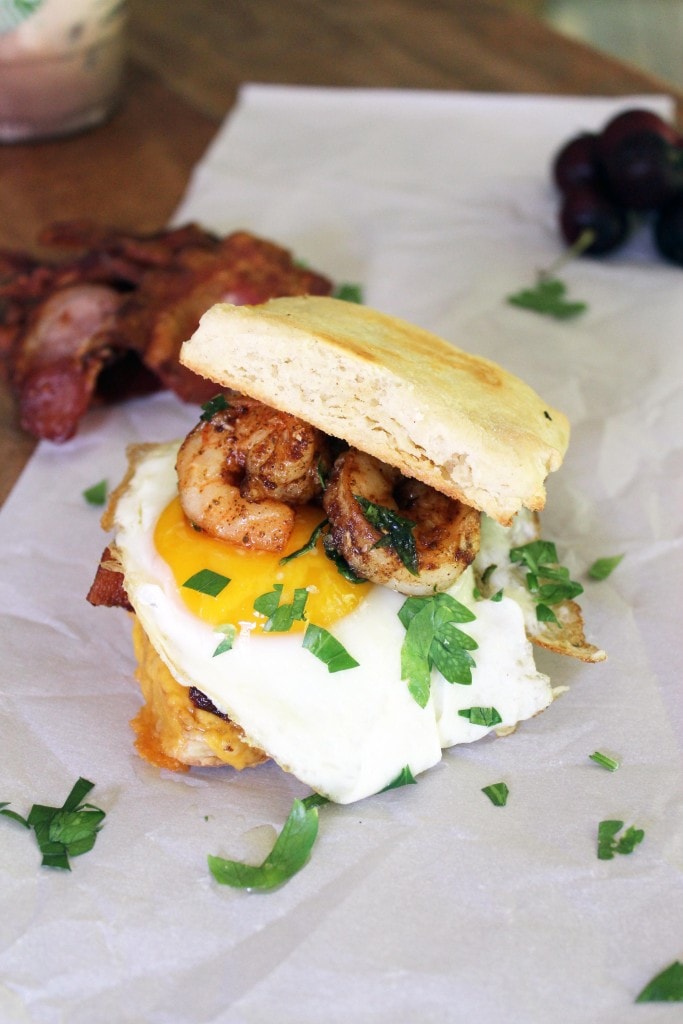 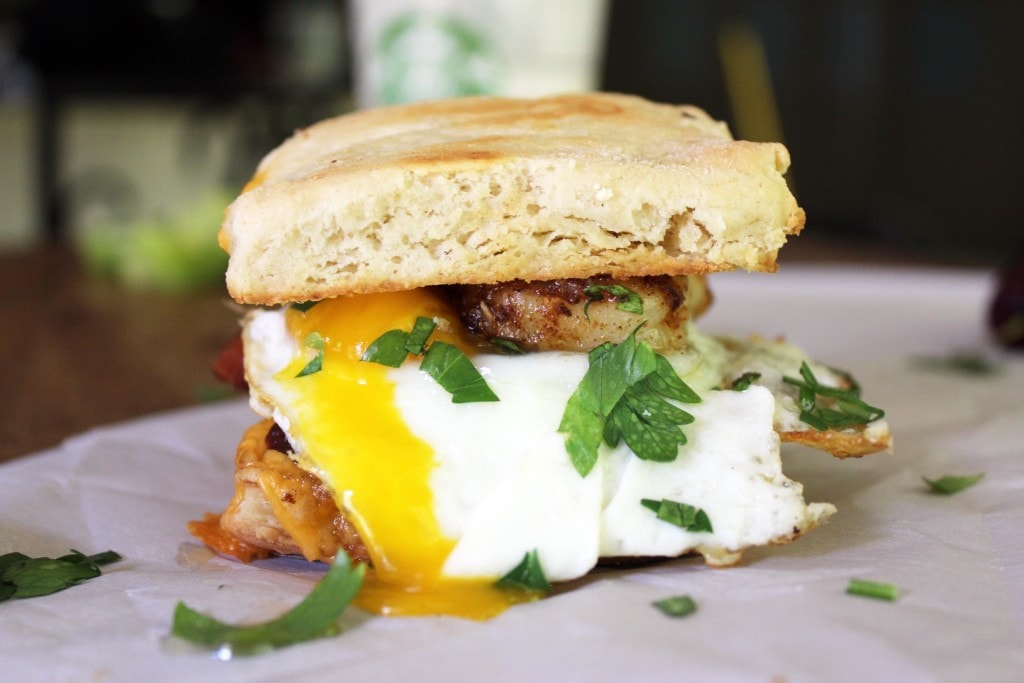 This kind of requires mimosas, so you might want to add that to the ingredient list below.  The flavors here are really a lot like Cheddar Bay biscuits, with the bonus of being made at home and BROWN BUTTER SHRIMP, people.  These should be on your list for what to make this weekend.  Or maybe in a few weeks for Father's Day!  This kind of feels manly, right? 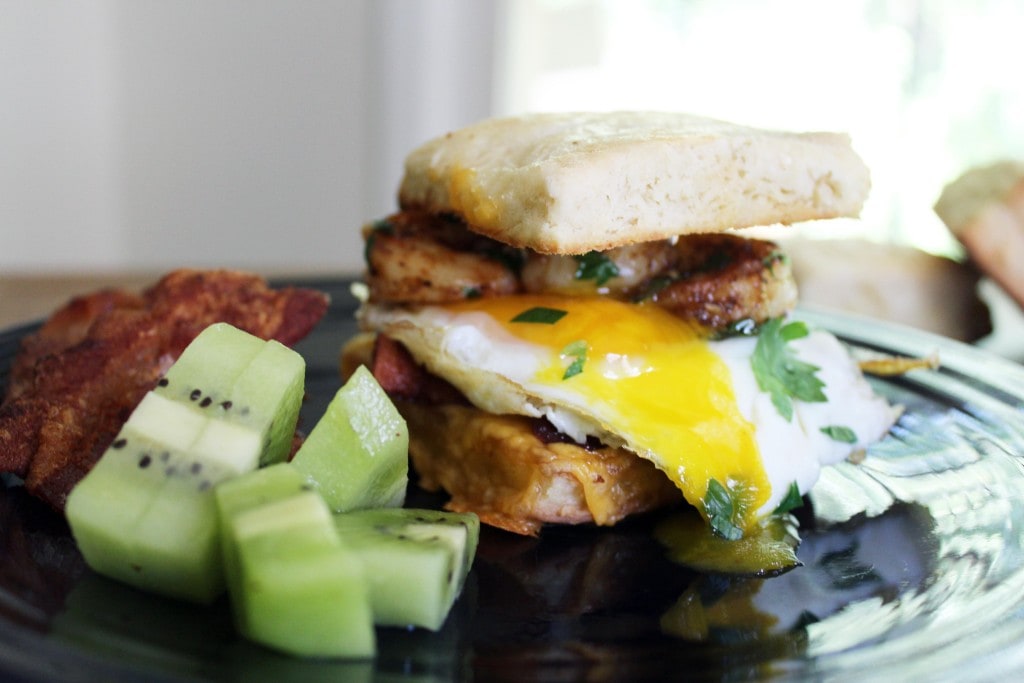