Here it is!  The second installment of i hate leftover hummus but also don't eat it that much.  It's a great series. 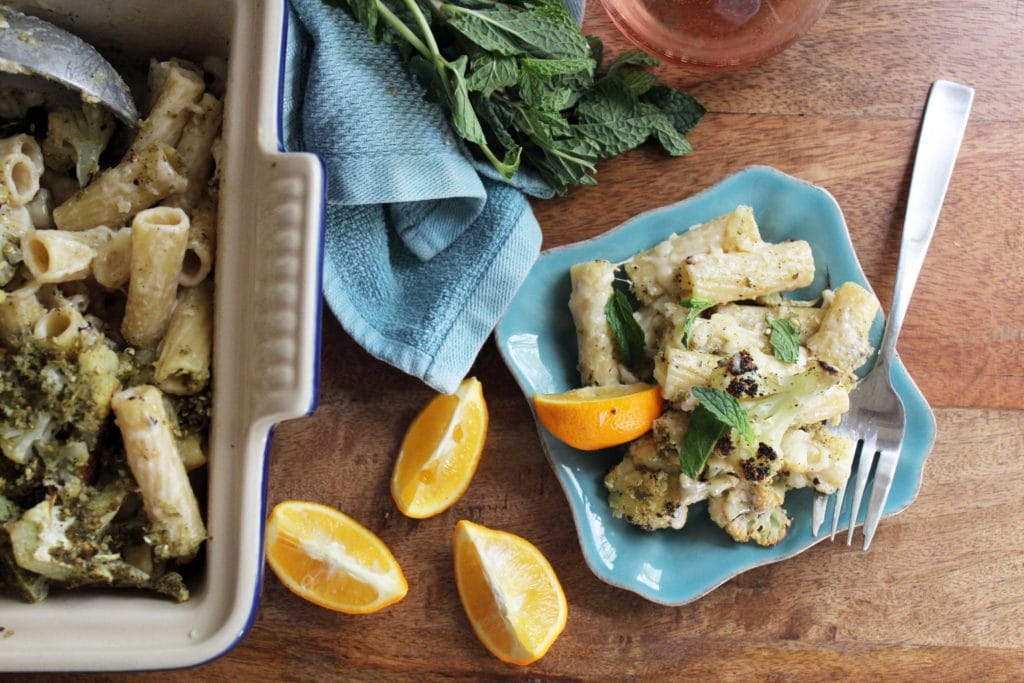 This is the end of it, I promise.

This mac is inspired by this cauliflower that I adore, macked (heh) up to the fullest.  The hummus makes the base of the mac and cheese, but then we add extra tahini and garlic for flavor, cheese after cheese after cheese, and a great crust on top of everything.  If you've never had zaatar, it's a Mediterranean spice blend that has sumac, coriander, sesame, and lots of other yummy flavors.  I get mine at the middle eastern grocery store here, but I've seen it in regular stores too!   It's great for topping stuff, dipping bread into with olive oil....pretty much all the good stuff you can think of.

So for this mac, you need some kind of pasta.  Cook it to BEFORE al dente.  Then when it bakes it'll finish cooking in the hummus sauce!  This is the same for any kind of baked pasta dish.  Then you'll need butter, garlic, leftover hummus, tahini, cauliflower, half and half, cheese, and panko bread crumbs.  For the cheese I used a combination of Fontina and Gruyere, but you can use anything you'd like. 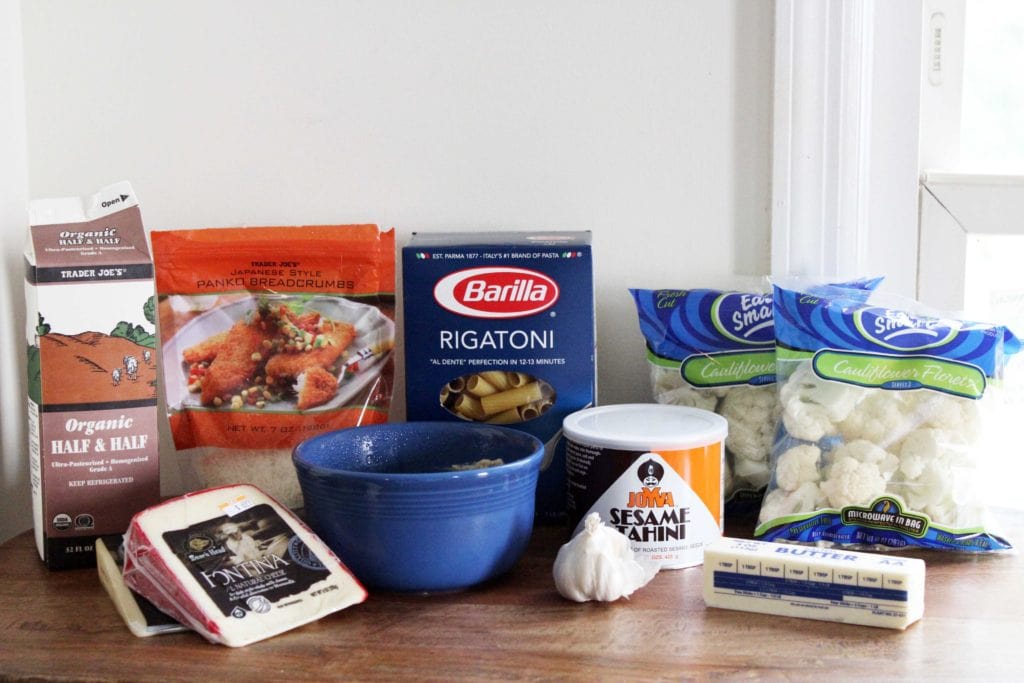 Then zaatar!  Spice blend.  Mine looks like this.  Buy some and keep it around, it's a really fun product to work with. 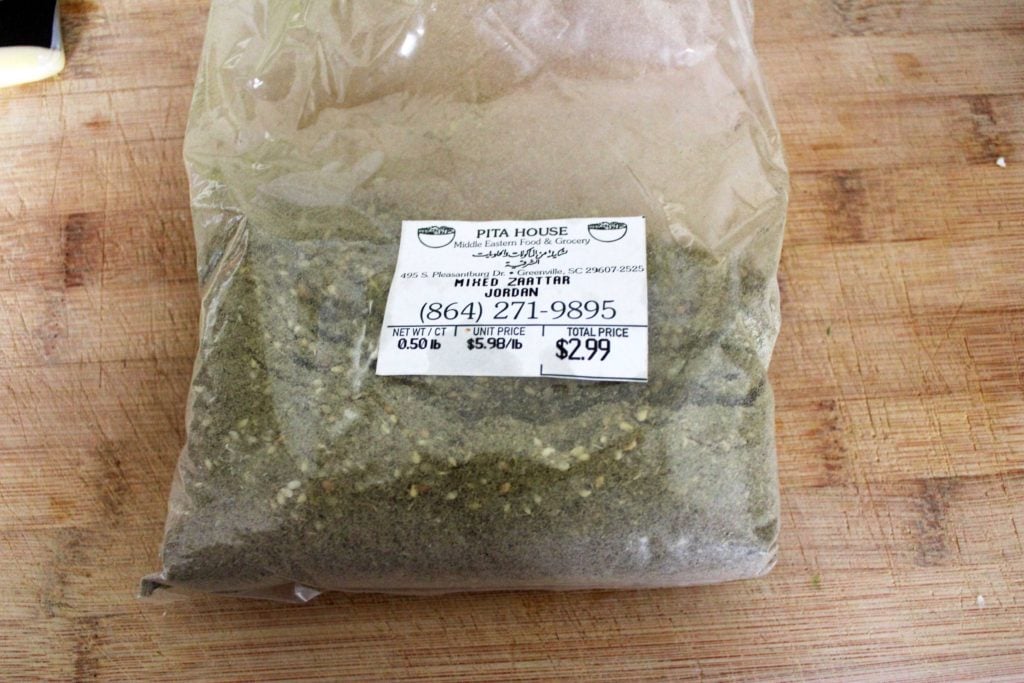 So the components are this:  Roasted cauliflower, mac and cheese with hummus sauce, spiced panko on top.  Bake, eat.  It's seriously a complete meal with the veg + protein + carbs!  I've also served it with a side salad and a piece of grilled salmon, and THAT was quite a dinner.  Anyway.  First!  Preheat the oven to 450F and get the cauliflower in a single layer on a big baking sheet.  I used bagged cauli because it was on sale, but this is about the same amount as a whole medium head of cauliflower, cut into bite-sized pieces.  Drizzle olive oil over the cauliflower and sprinkle it with zaatar.  Mine has salt in it, but if yours doesn't sprinkle some salt over the cauliflower too. 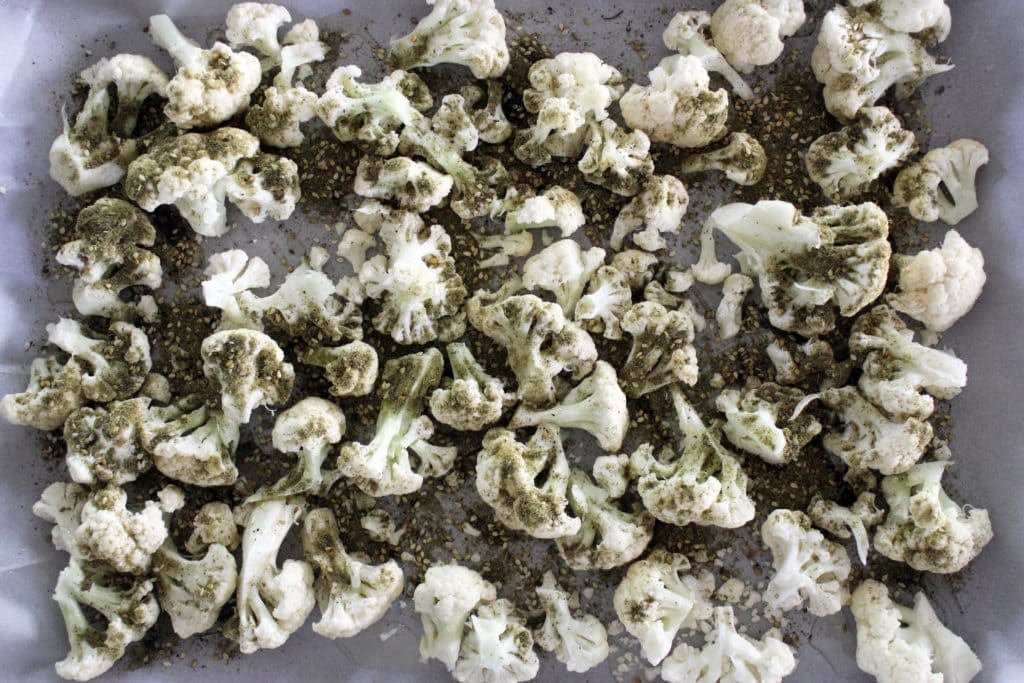 Then, roast the cauliflower.  15 minutes or so, until it's soft and darkened at the edges.  Take it out to rest when it's done and reduce the heat on the oven to 375F. 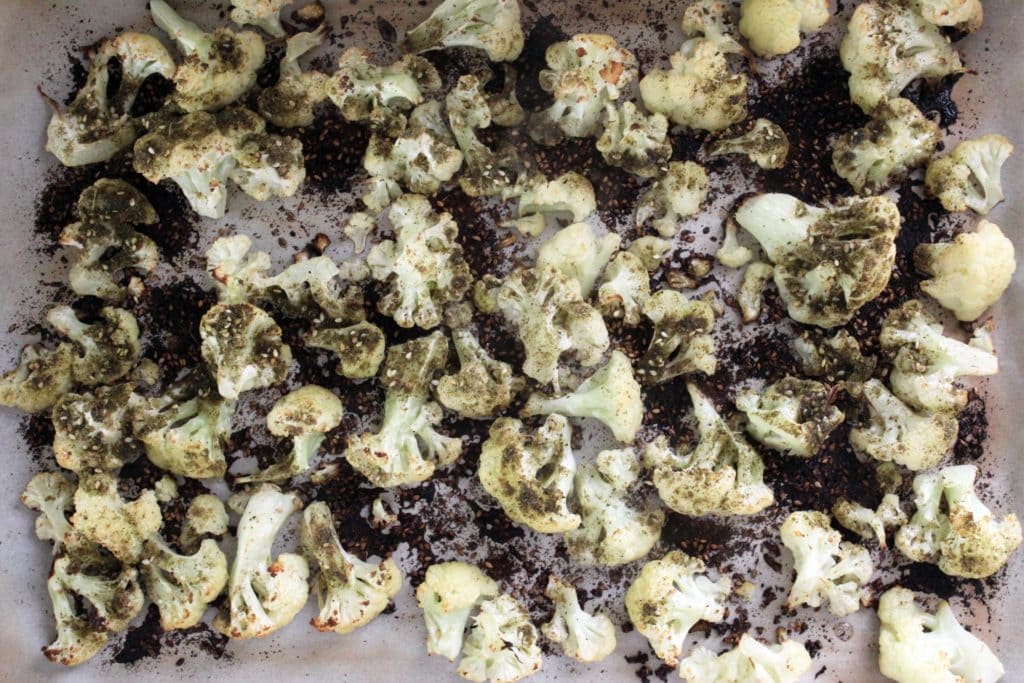 While the cauliflower is working, I like to cook the pasta.  While that's all happening, make the topping!  1 tablespoon softened butter, 1 tablespoon zaatar, ¼ cup panko bread crumbs. 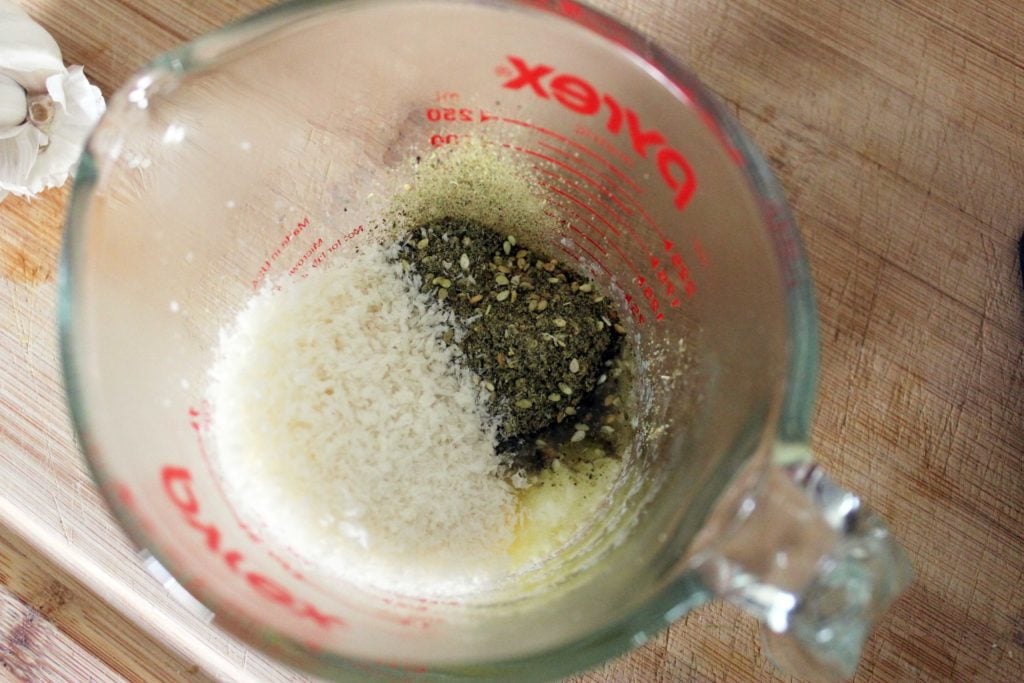 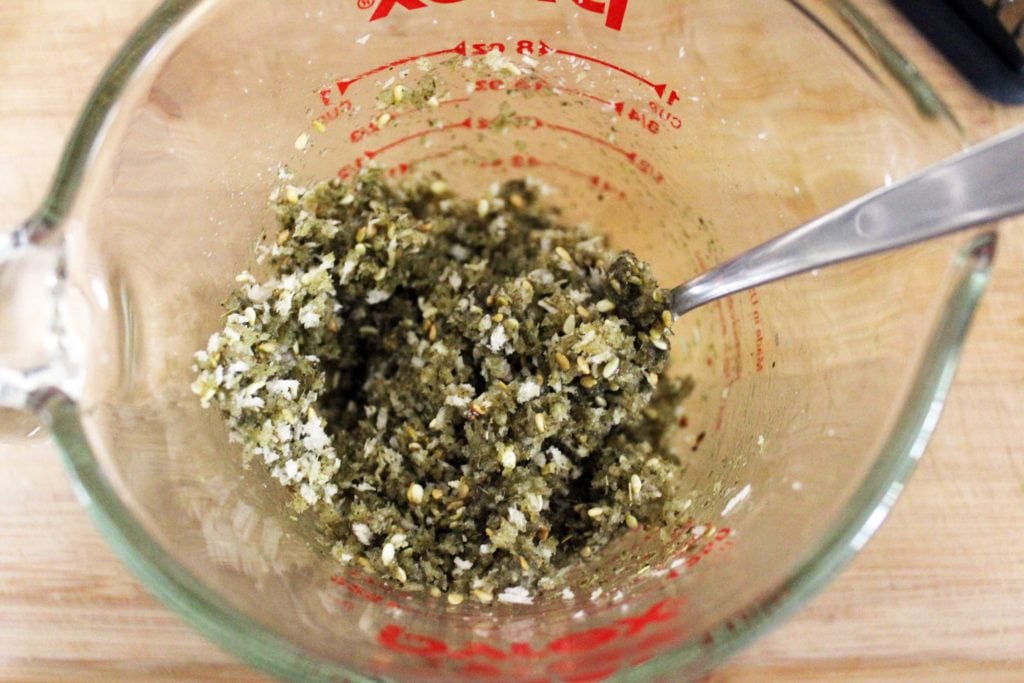 Now, at this point vaguely you should have topping prepped, cauliflower roasted, and pasta boiled, drained, and hanging out for it's turn. 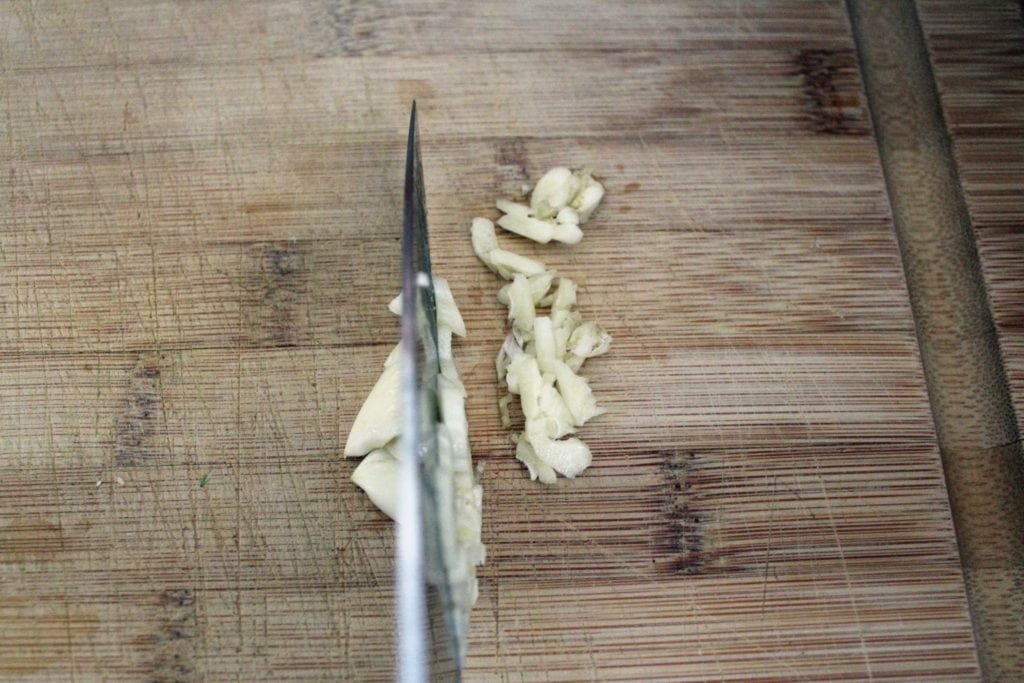 Mince the garlic and grate the cheese. 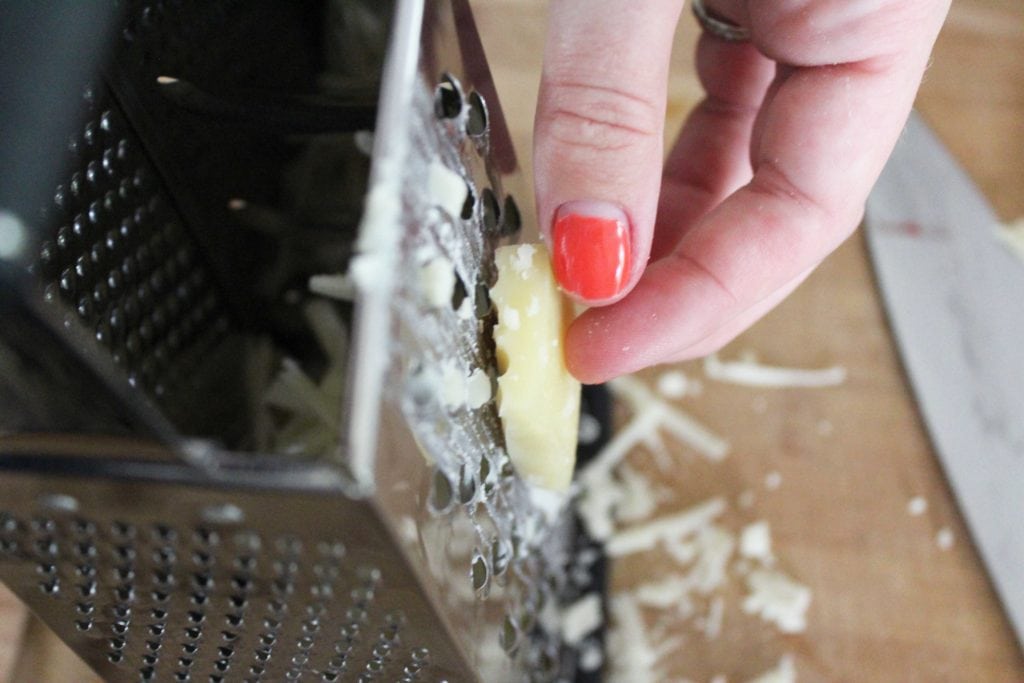 Then, in the pot that you used to cook the pasta, add another pat of butter, the pasta, garlic, hummus, half and half, and tahini. 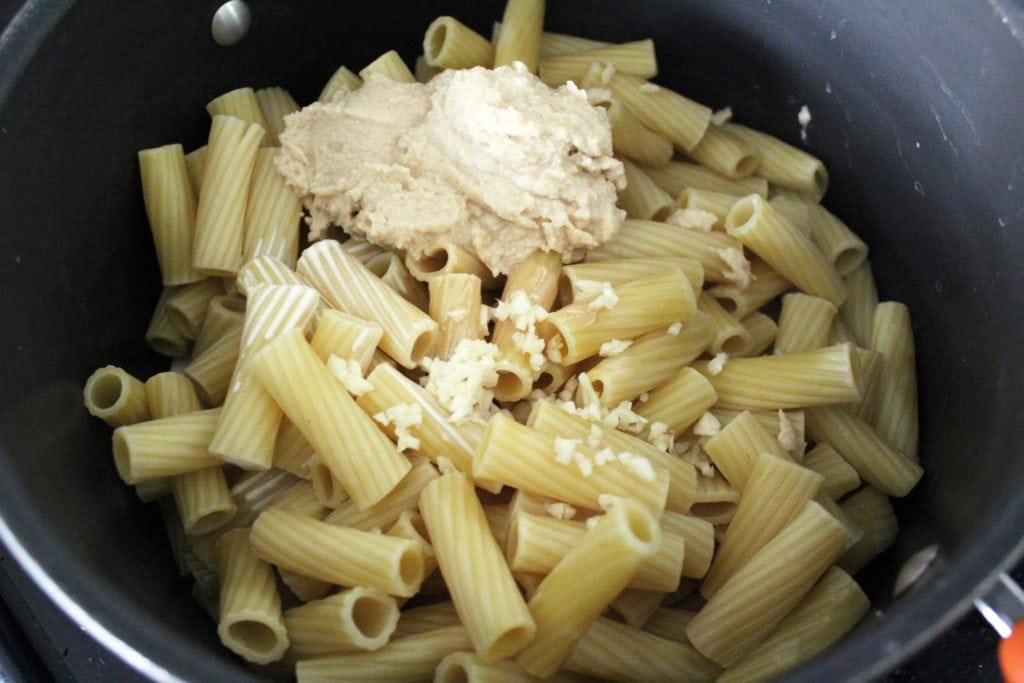 The tahini is so creamy and wonderful and gives the BEST taste to this, I promise. 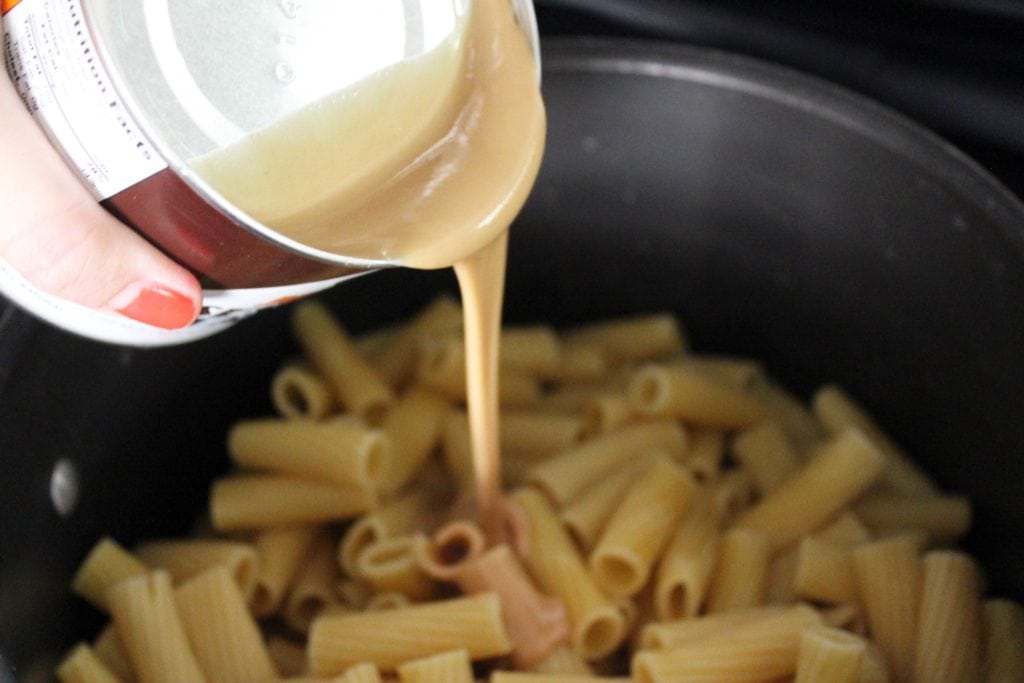 Stir everything up, then add in the cheese!  Stir THAT in; I don't like it to melt too much at this point, that way when you bake the mac you end up with a nice stringy cheesy end result. 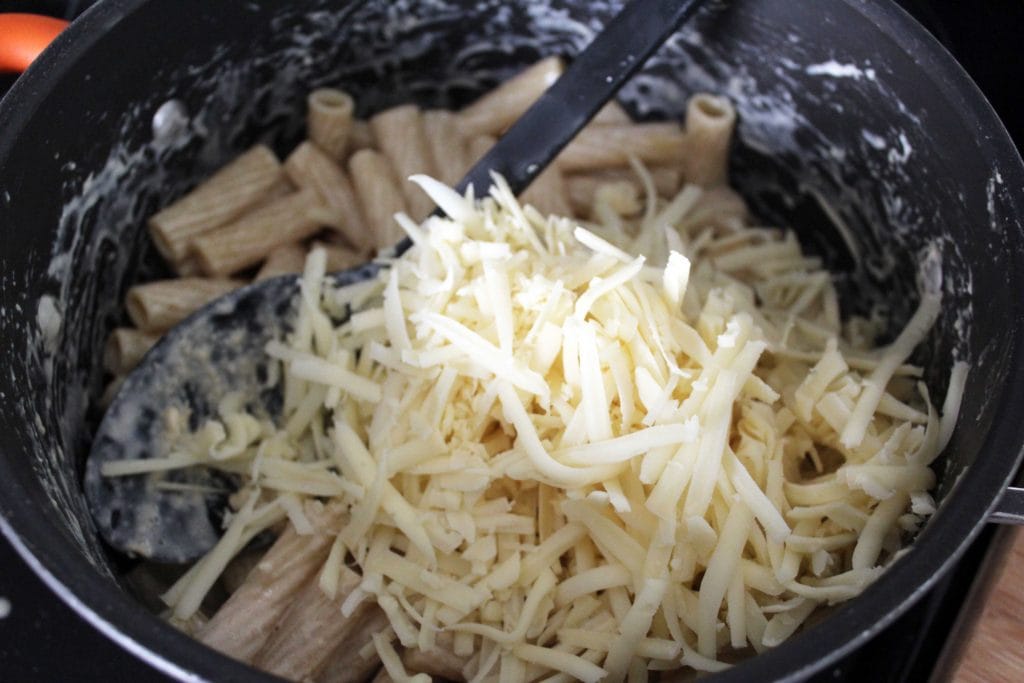 Taste the pasta and add salt and pepper if you'd like.  When the pasta tastes great, pour it into a baking dish.  It should be saucy - splash in some more half and half if it seems dry. 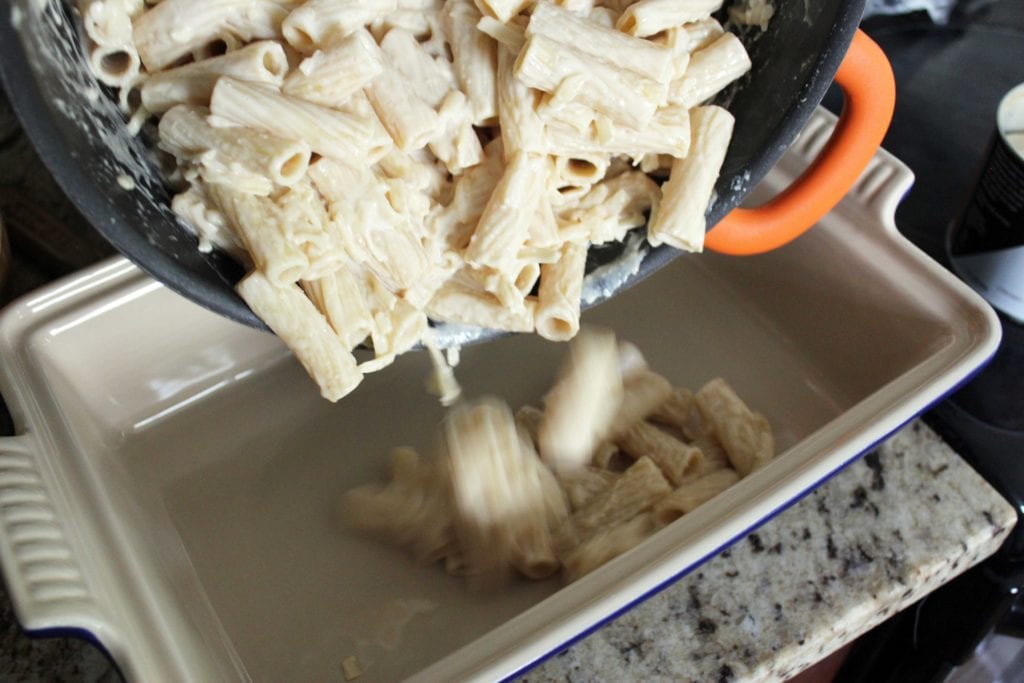 Top the pasta with the roasted cauliflower, and top THAT with the panko mixture you have standing by. 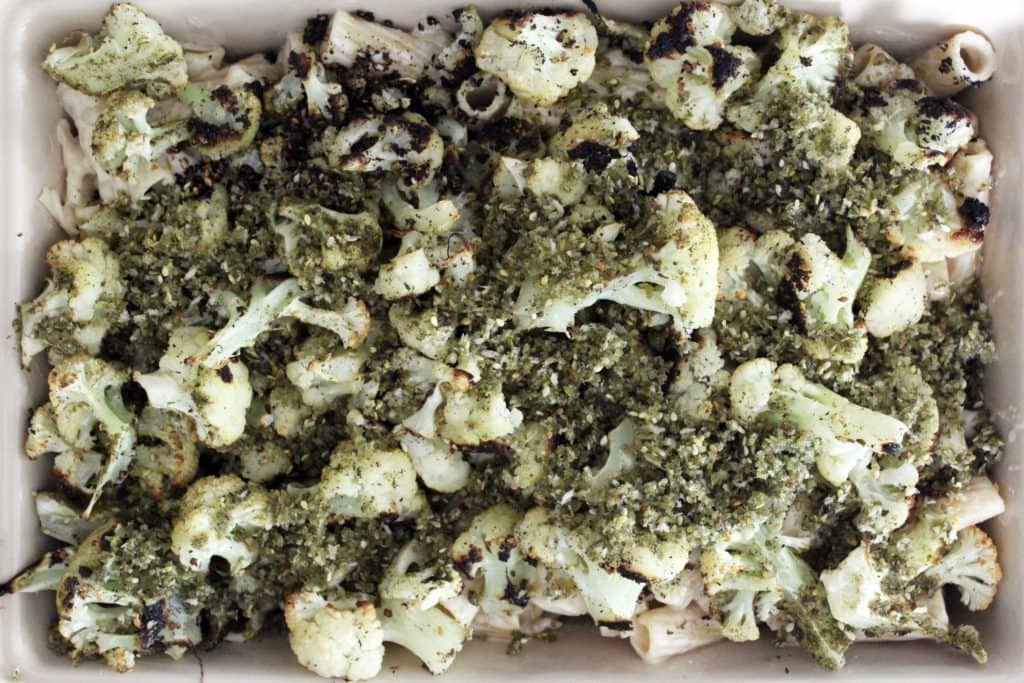 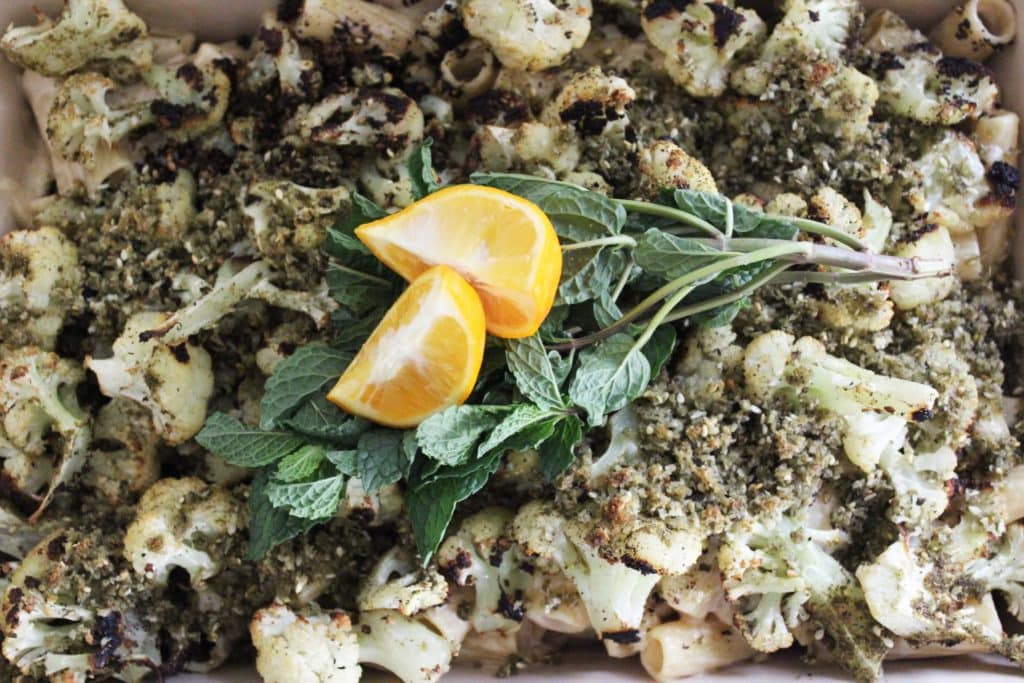 Meyer lemon slices never hurt anything either, I'll tell you that right now. 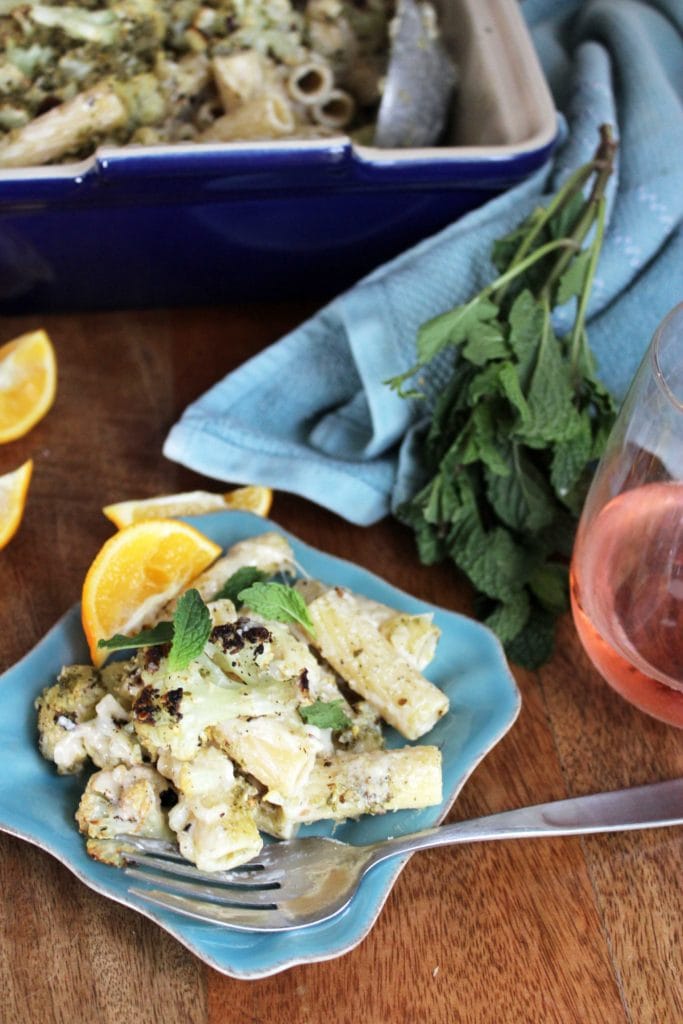 This, my friends, is excellent.  It is nutty and rich from the tahini and cheese, but the cauliflower lightens it and the zaatar has a great tang from the sumac - I can't describe it. 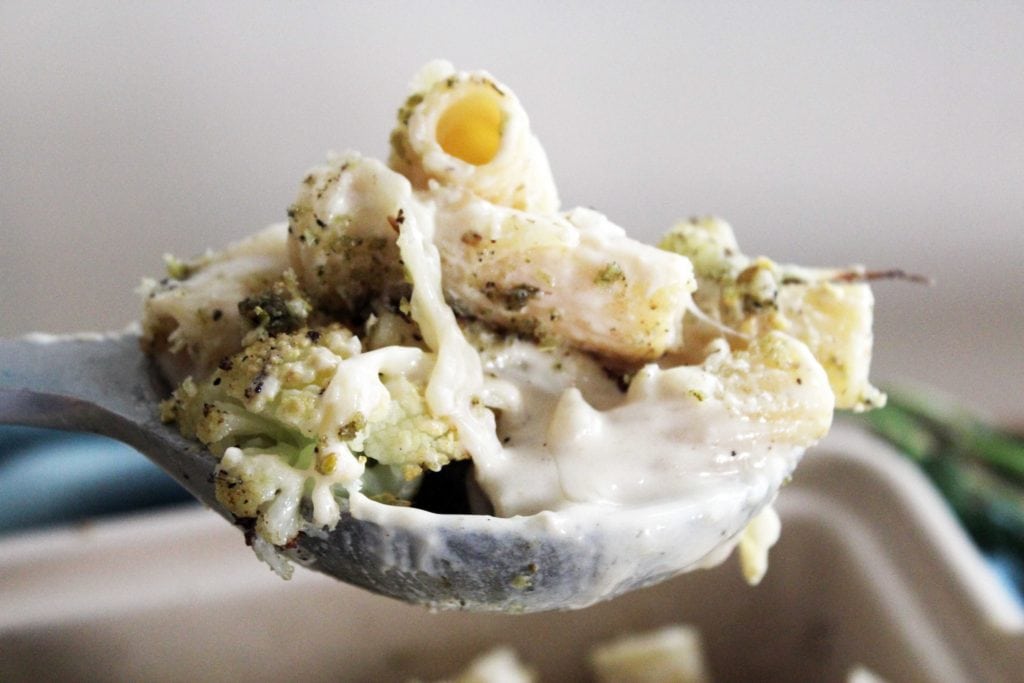 As a meal or as a side dish, THIS is your new fav leftover hummus dish.  Unless you like the pasta salad more.  In which case I get it. 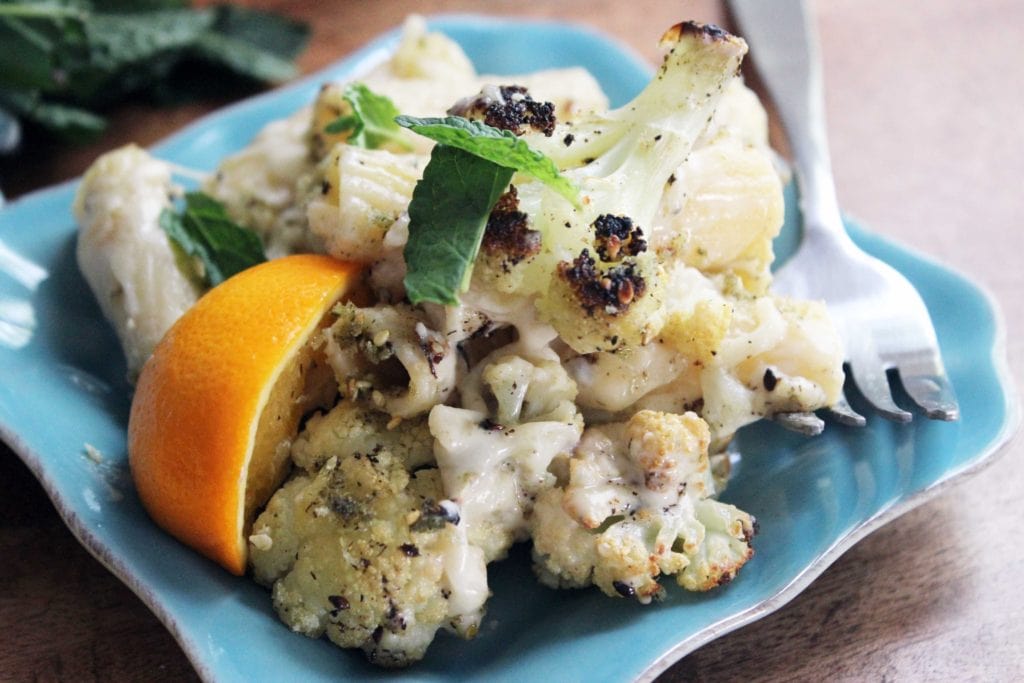