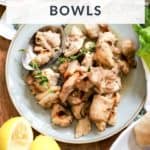 Delicious broiled chicken thighs with Greek chicken marinade! This version of honey lemon chicken has a quick and easy marinade and is done in under half an hour because the chicken is broiled quickly. Serve these on their own, in pita for chicken gyros, or as part of a Mediterranean charcuterie board!

This has recently become one of my favorite ways to serve chicken, especially in the summer - Greek-style with tangy tzatziki sauce, broiled in the oven for a quick and easy weeknight dinner situation.

Greek flavors are some of my favorites, and I love a whole meal that is lemony, oregano-y, and honey-esque.  Lemon, honey, olive oil, garlic, and oregano are cornerstone flavors of Greek food and can be mixed and matched in a thousand ways to create different dishes!

These chicken bites are super simple and only have a few steps. For me, I start by figuring out what I'm going to serve these with, then marinate the chicken and make the rest of the meal while the chicken marinates and broils.

The ingredients for the marinade are simple; lemon, vinegar, honey, olive oil, salt, and oregano. For the record, the marinade is VERY delicious as a pasta salad dressing or as a marinade for pork or shrimp.

I like to broil the chicken because it's way less messy than cooking it in a skillet AND is done faster and cooks more evenly. You can absolutely skewer and grill OR sear this chicken in a pan on the stovetop, though!

Preheat the broiler to high, broil the chicken for 5-7 minutes, and that's it! Delicious, perfectly cooked chicken bites in just a tiny amount of time.

I serve this with tzatziki and rice with a roasted veg of some sort for a quick dinner, but I also like having these on a plate with toothpicks and tzatziki as part of a Mediterranean charcuterie board or similar.

The benefit of keeping ingredients separate like in these pictures is that everyone can build their dream Greek rice bowl dinner, even if it's completely different than someone else's!

For leftovers, I like these chicken thighs over salad for lunches and stuffed into pita with crunchy lettuce for a yummy restaurant-worthy sandwich. The leftover chicken is delicious cold!

I LOVE this chicken for so many reasons, mainly, though, that everyone loves a honey lemon marinade situation. Make these soon, make these often, I hope you love them! 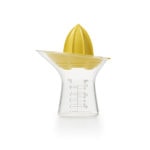 Vinegar: White vinegar, rice vinegar, or apple cider vinegar would all be delicious if you don't have red wine vinegar. I'd avoid balsamic as it would change the dish significantly, but Balsamic Chicken Bites doesn't sound terrible so maybe try it and report back?

Serving: This chicken is delicious over rice with any veggies you like. You could also serve it with tzatziki, hummus, and grape leaves with pita as part of a larger build-your-own-Greek-heaven situation, which would be very fun.

This recipe was originally published in August, 2011 and has been updated with new measurements and instructions. The recipe has been a favorite of ours for over a decade!