It's definitely a noodle day. 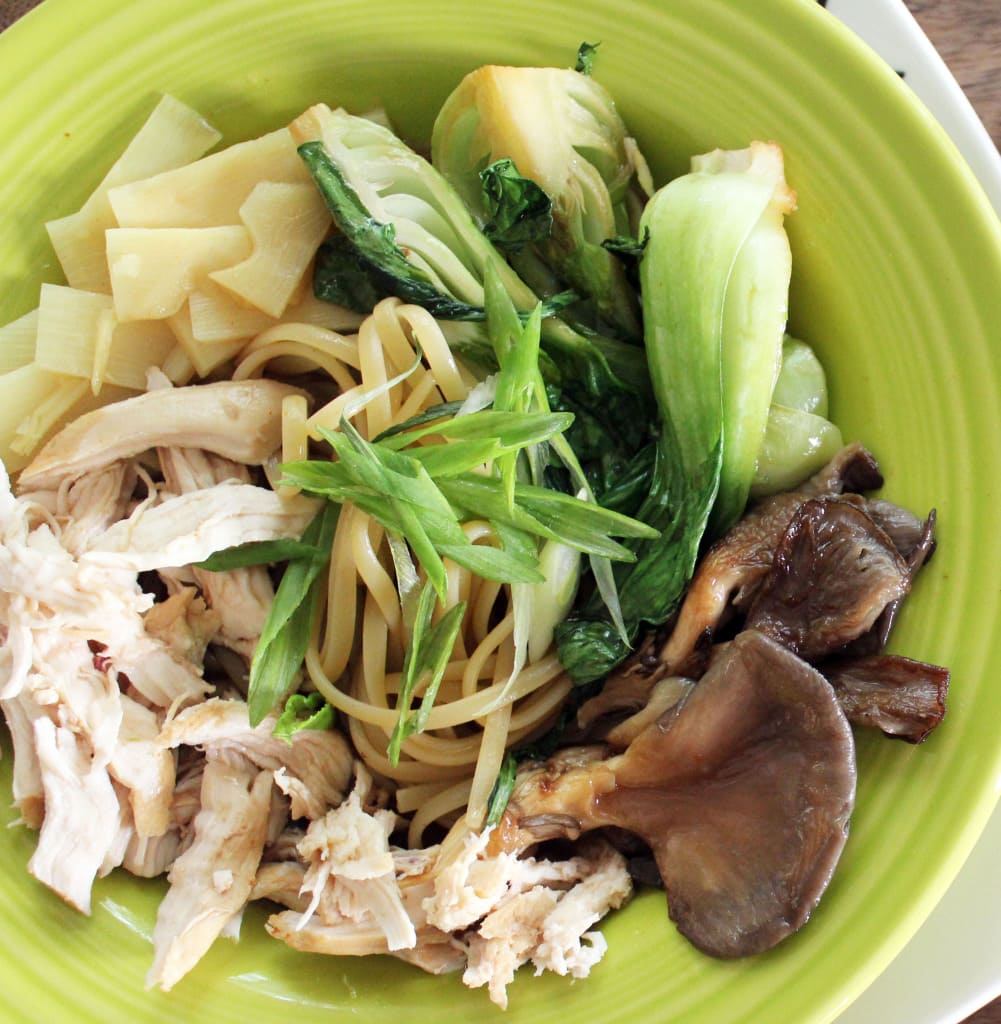 I've been sick all weekend, so ramen is totally perfect for that, but MORE IMPORTANTLY, we're balls deep into the first season of PBS's Mind of a Chef (on Netflix), and there have been several episodes relating to Asian style noodles and ramen in particular that have me all nostalgic.

This isn't a traditional ramen by any means, but it's quick enough to make on a Monday and SUPER delicious.  Later this year I have plans to make legit ramen that takes 8 days and your firstborn or something, but for today this will have to do. 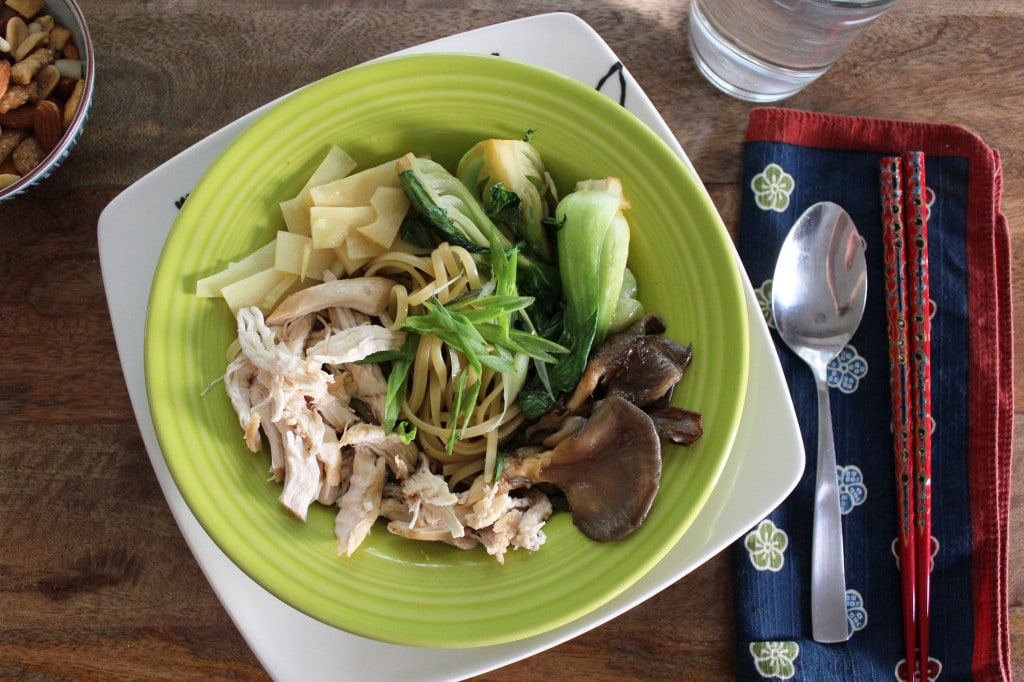 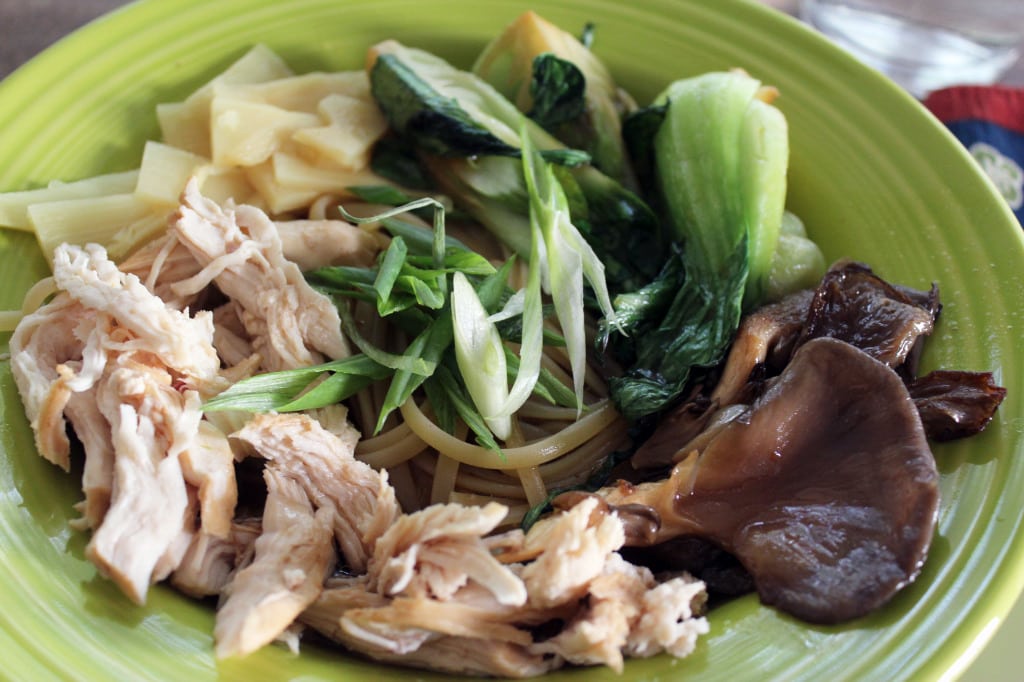 This is my version, but obviously the type of veggies you use AND protein AND noodles can be swapped out depending on what you like and/or are in the mood for.  I had bamboo, oyster mushrooms, and bok choy for veg, chicken for protein.  Then long noodles.  For the broth, veggie stock, sriracha, mirin, soy sauce, rice vinegar, and garlic.  Then, a scallion for topping. 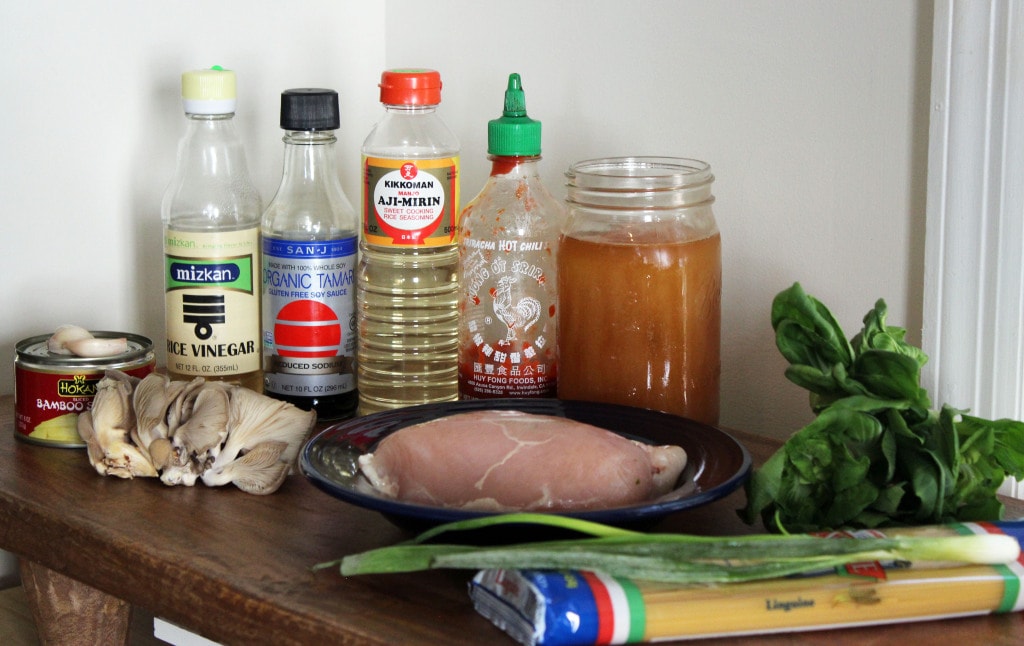 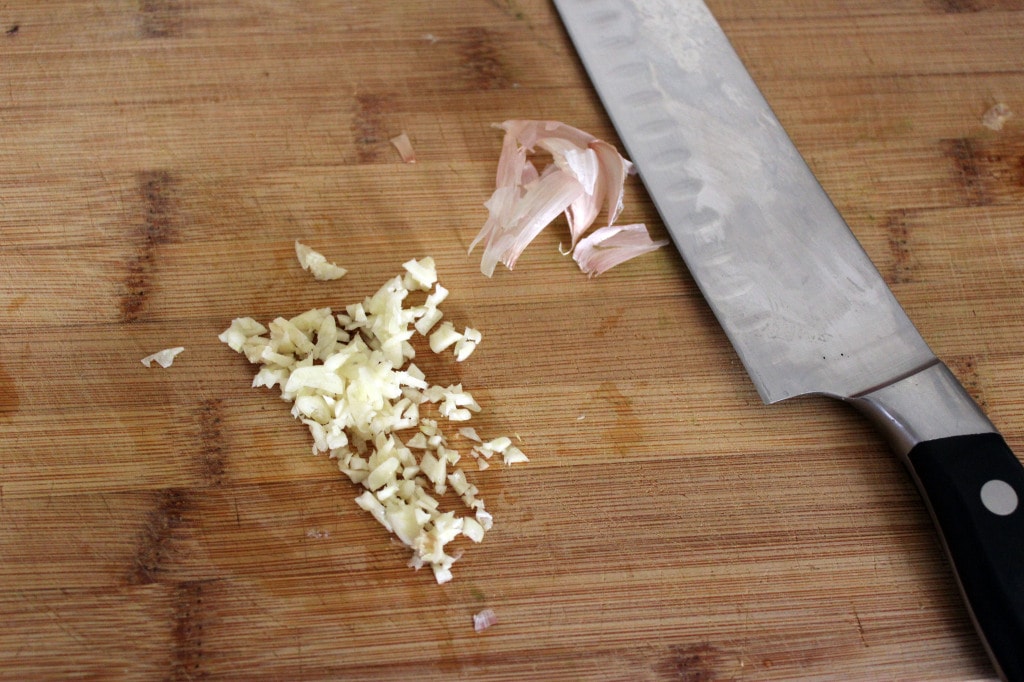 Then, let's start with the broth, which we'll make while we cook the chicken.  Add the chicken to a big pot, and cover it with vegetable stock.  Go low or no-sodium for this, since we add soy sauce we don't want to end up with a super salty ramen. 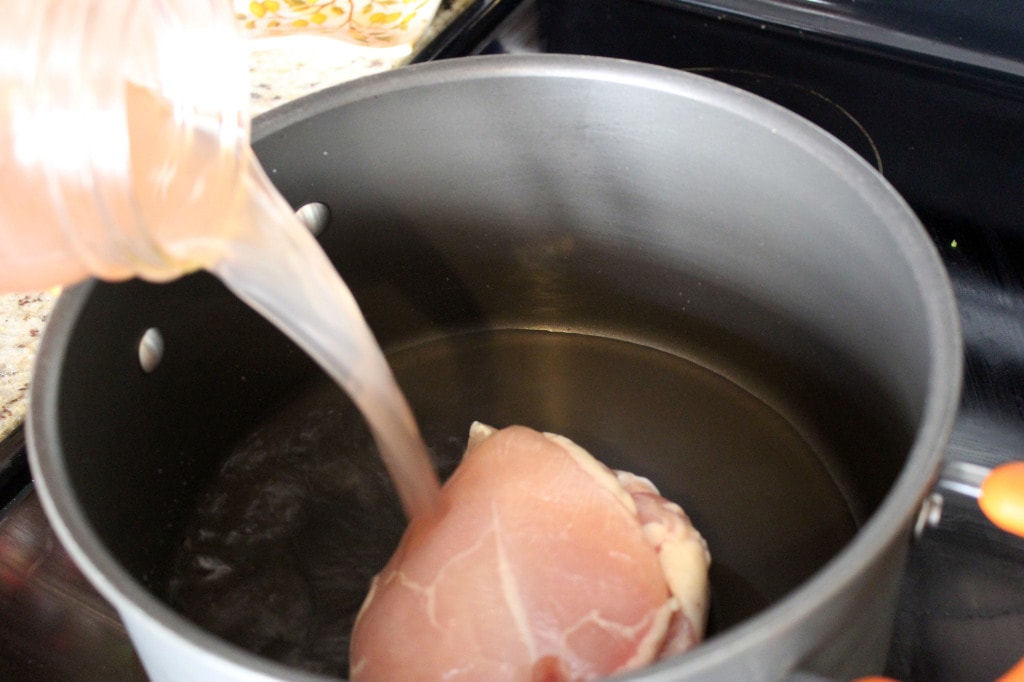 Then, add in the rest of the flavors.  Soy sauce, sriracha, mirin, rice vinegar, and the minced garlic all go in to the pot with the stock and the chicken. 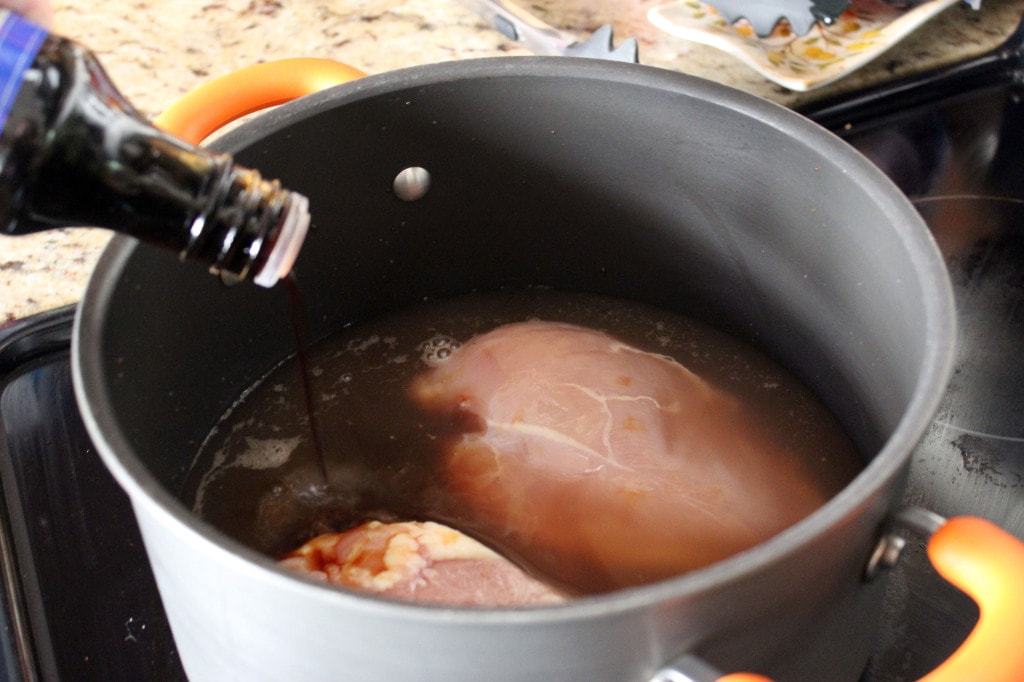 Cover the pot, bring the liquid to a boil, then reduce the heat to medium-low and poach the chicken gently. 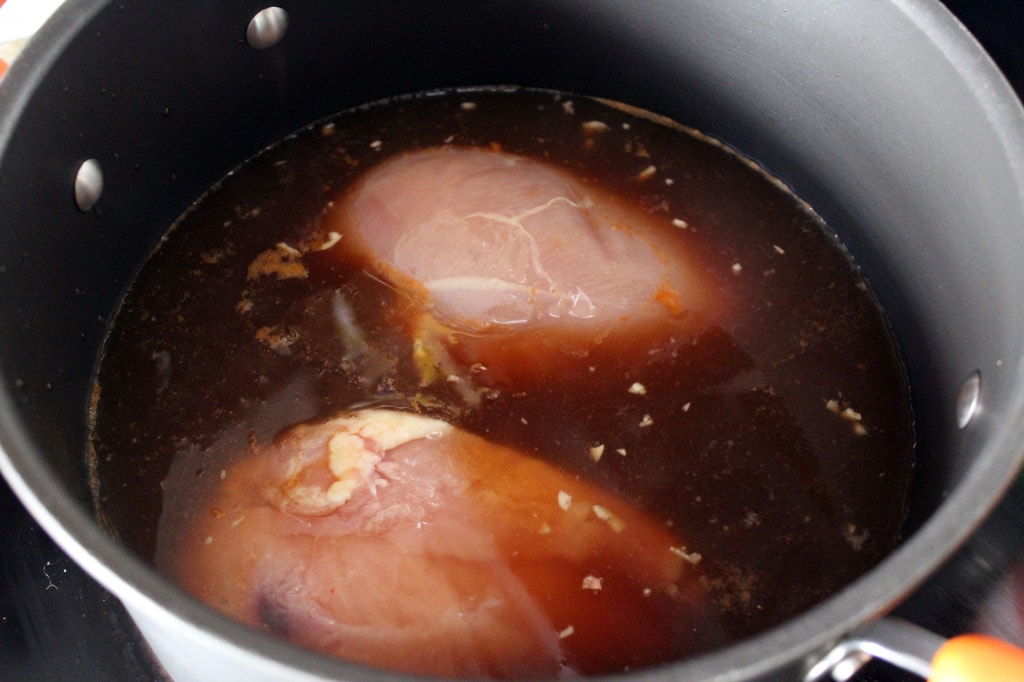 While the chicken is working, prep the veggies you'll be using into large chunks, and preheat a skillet to medium-high with a little bit of oil. 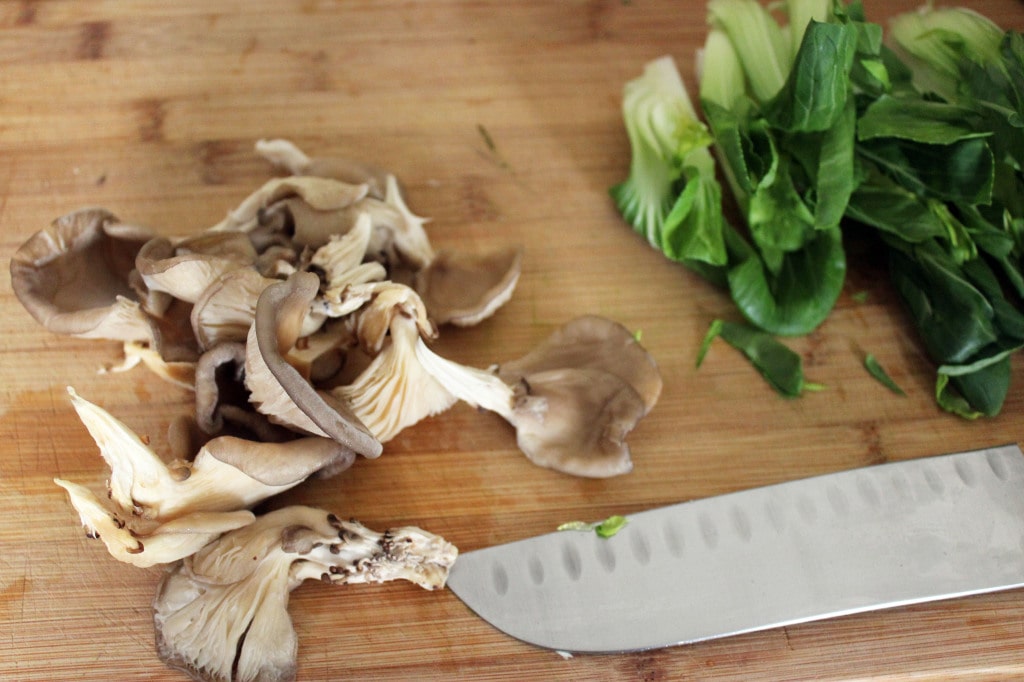 When the oil is very hot, add the vegetables one item at a time (bok choy and oyster mushrooms, in my case), and cook them until wilted and browned on both sides.  Right before you remove the veg from the pan, add 1 teaspoon of soy sauce to flavor the vegetables themselves. 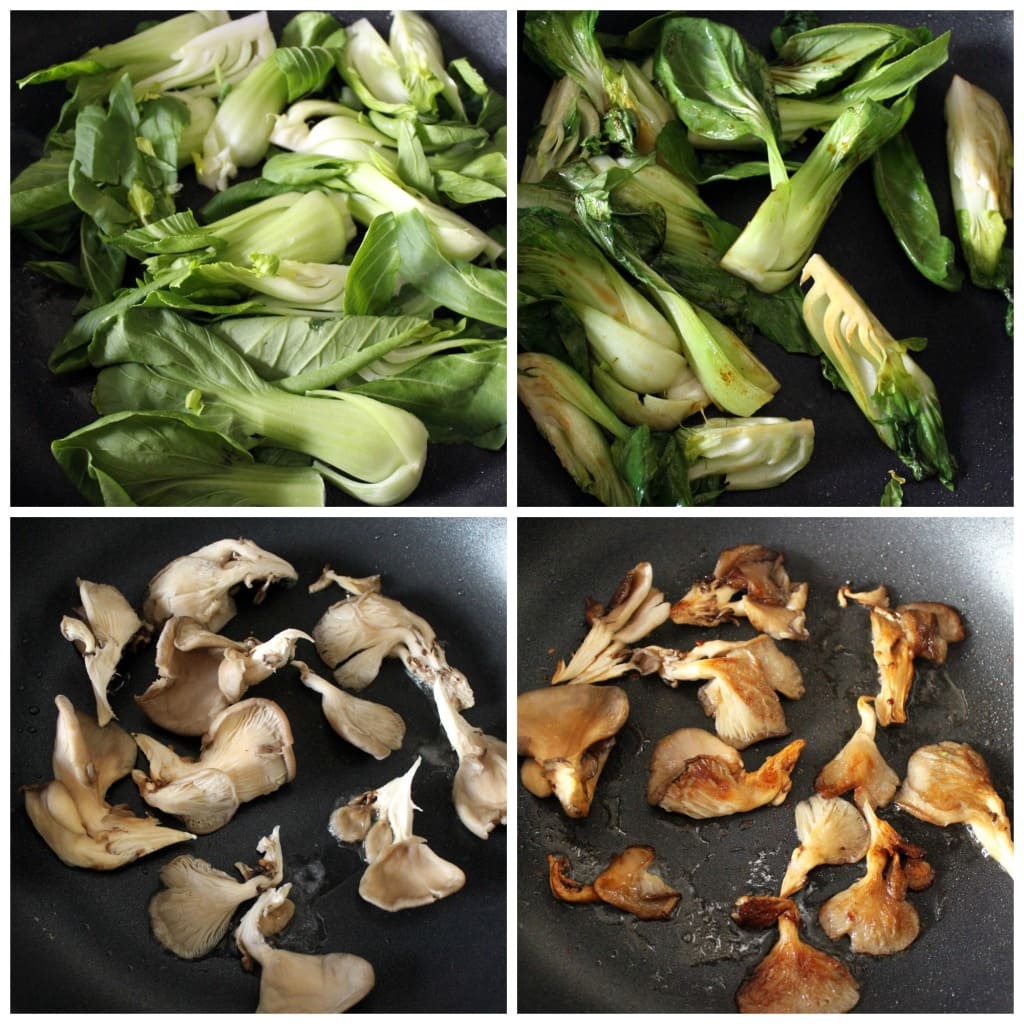 So now we have our veggies all prepped! 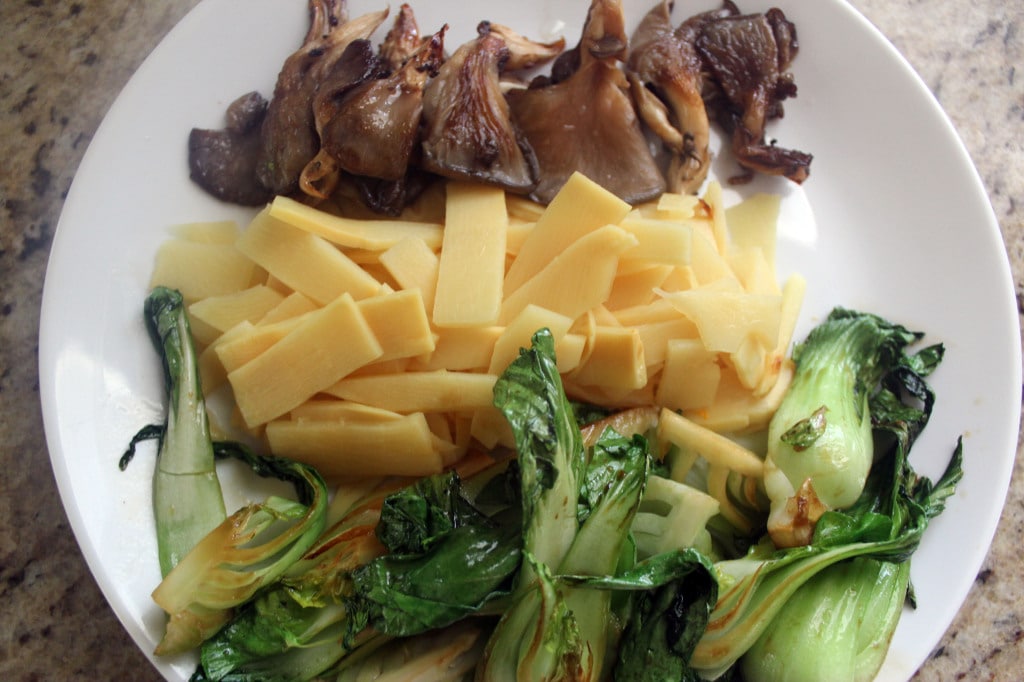 When the chicken is cooked through, after about 15 minutes, remove it to a plate to cool.  When cool enough to touch, shred the chicken with forks or your fingers. 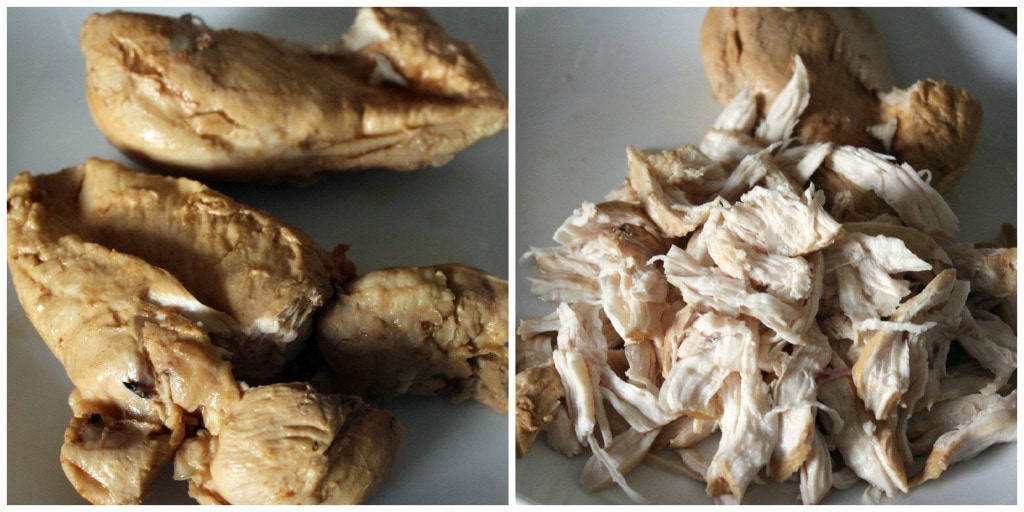 Turn the heat up on the chicken broth to medium-high, then taste:  add more soy sauce if you'd like! 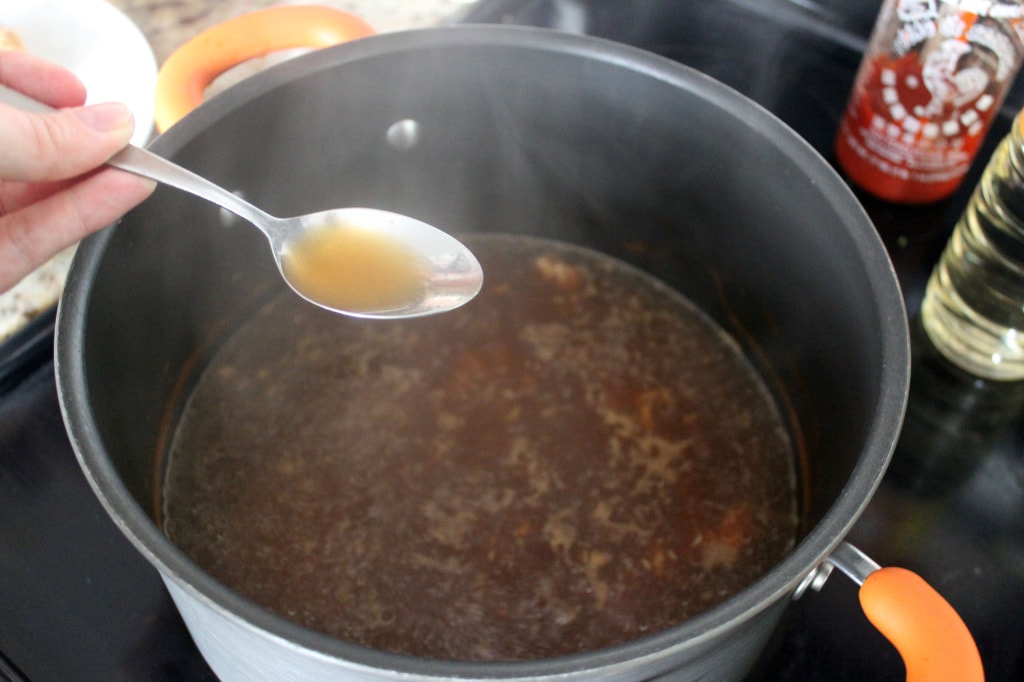 Now, we have our broth adjusted, so let it simmer for a few minutes while you prep some last things.  Grab some sesame oil if you have any - it's a great drizzle over top of the ramen. 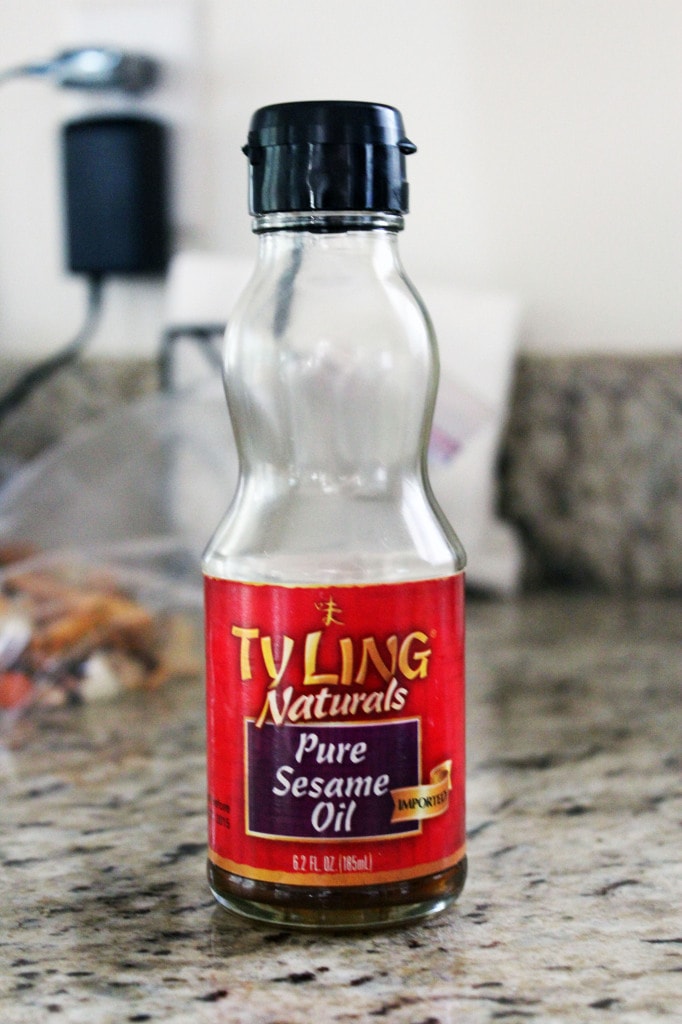 And, thinly slice the scallion for topping. 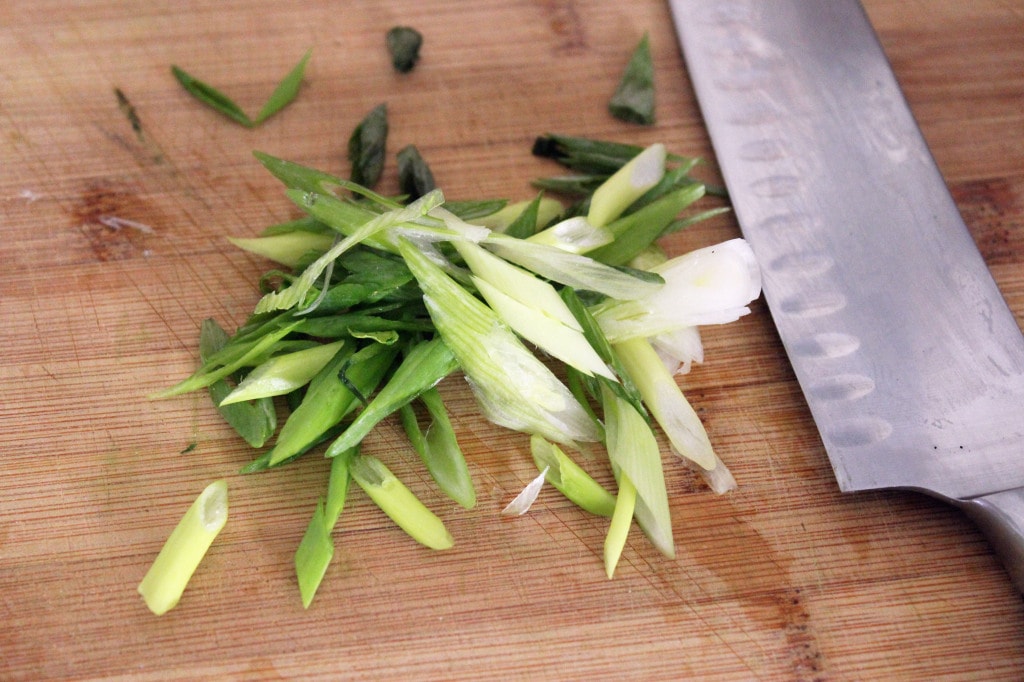 Now, let's build the ramen.  Start with noodles, then add veggies and chicken.  Drizzle with olive oil, then ladle the whole mess with the yummy broth.

Top with scallions, and RAMEN. 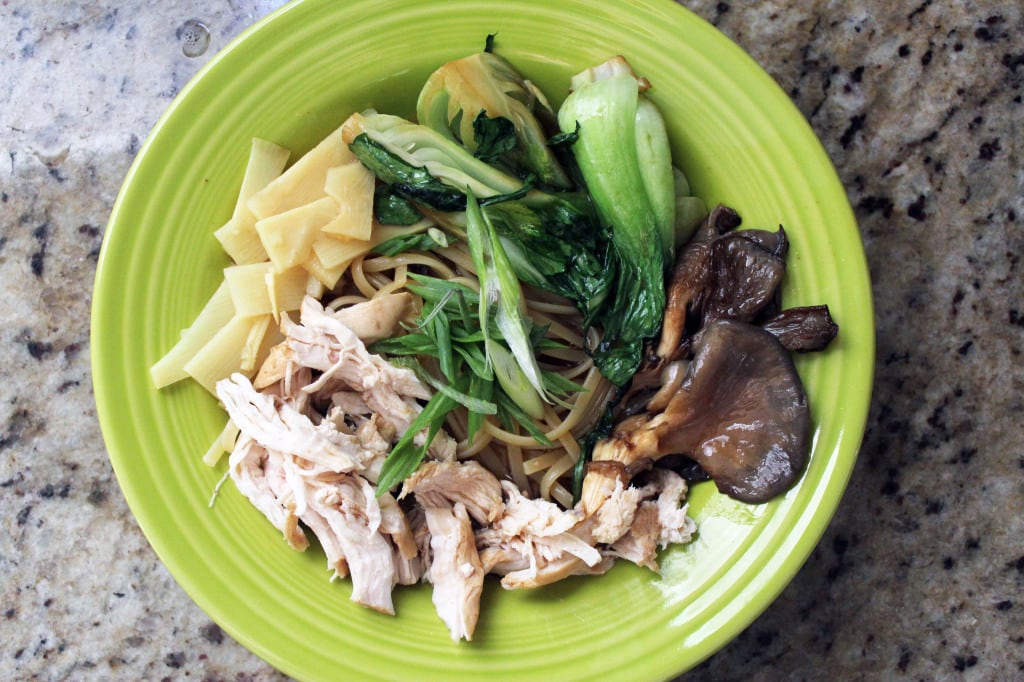 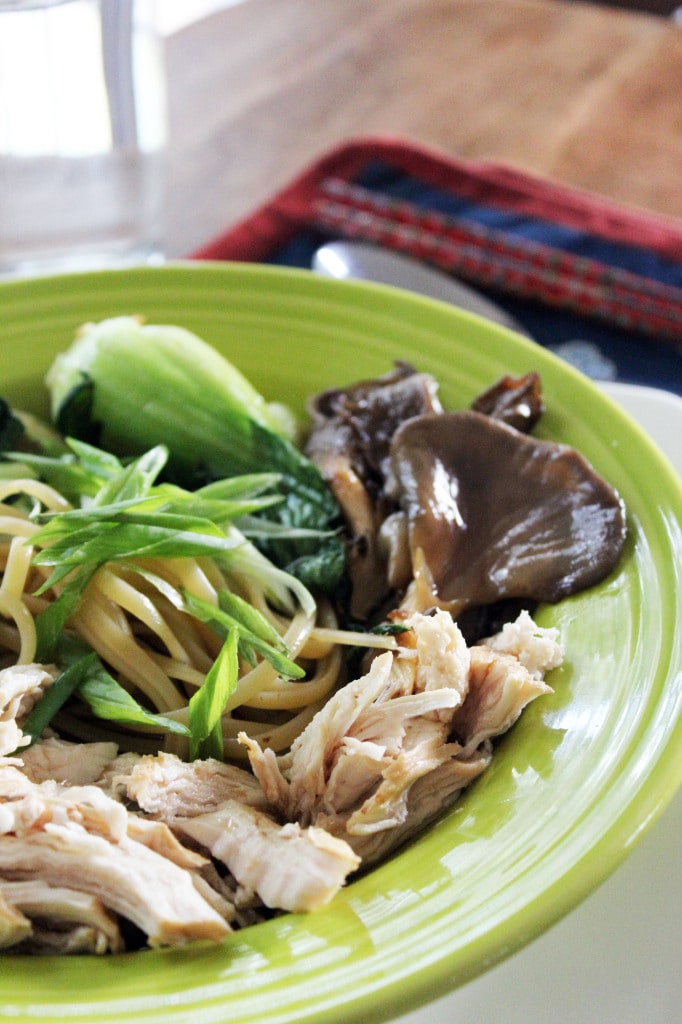 In not too much time, and for WAY less than you'd spend at some fancy pan-Asian joint that charges $16 for a bowl of essentially salty spaghetti. 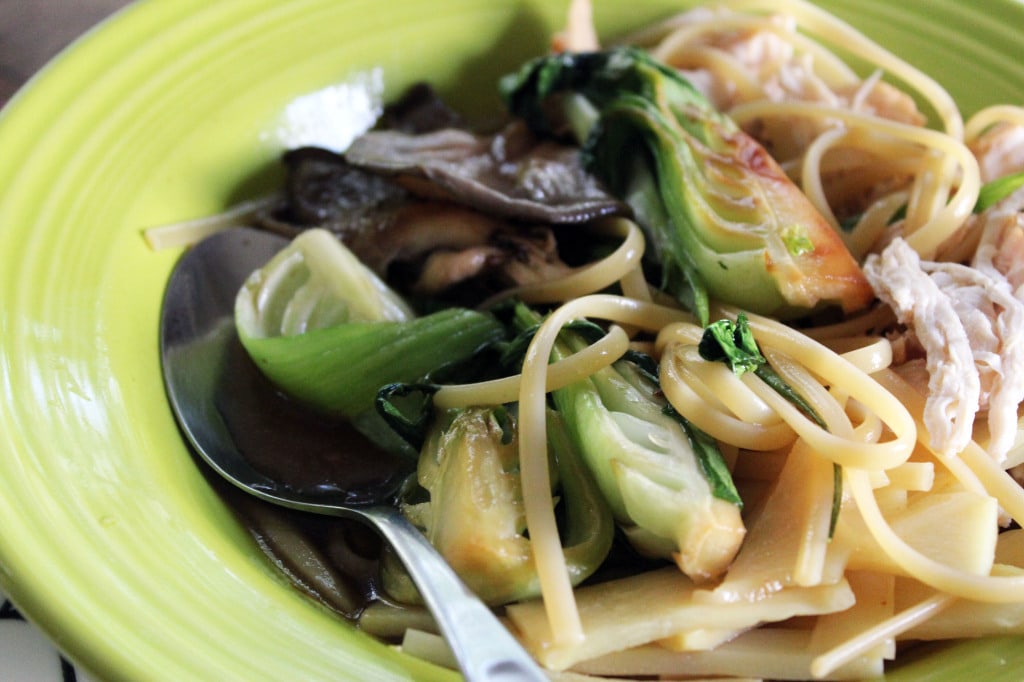 You will adore this, friends.  Remember that it can be customized almost any way you'd like, but the best part of this is really the broth.  The vinegar and mirin add a nice flavor that is sexier than just soy sauce and stock together, promise. 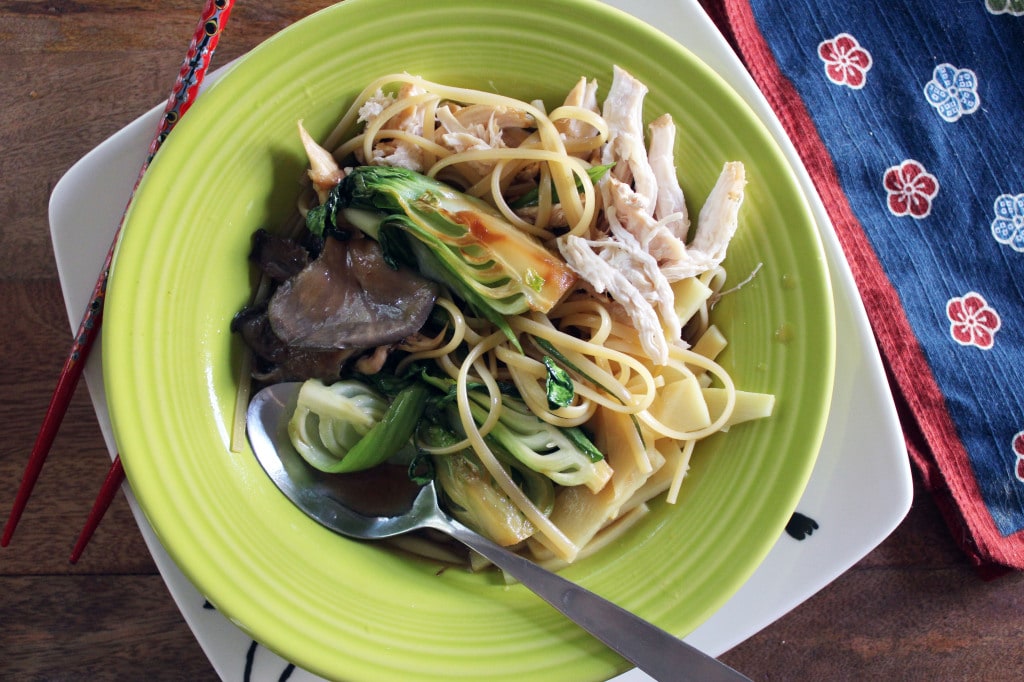 And the noodles love sexy flavor. 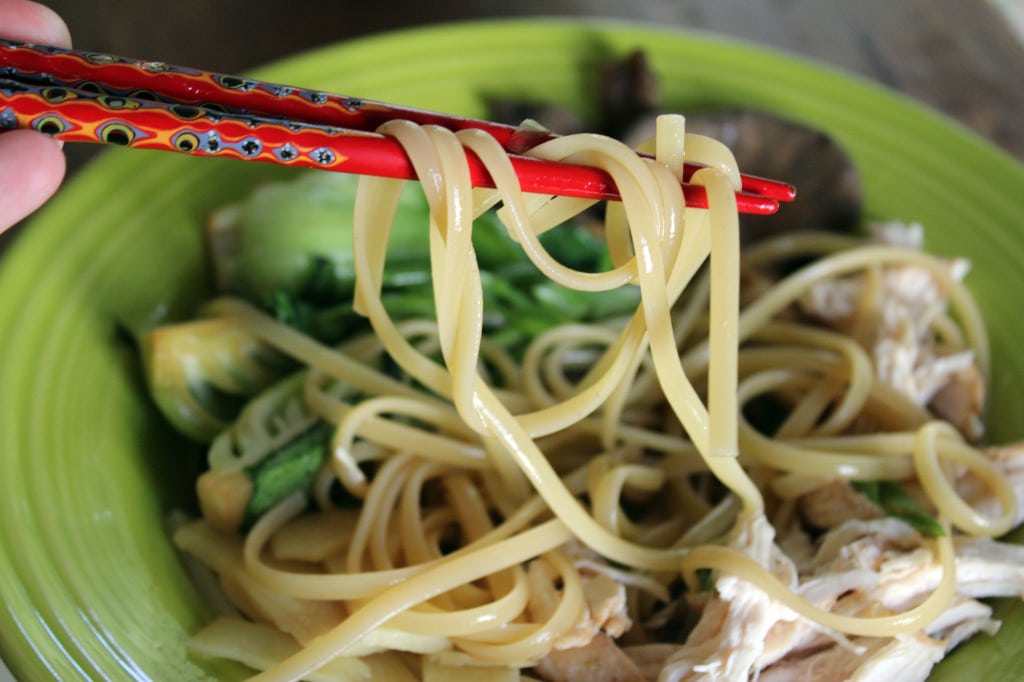