Cool story: It's my birthday week so we're starting with fried chicken and heavy cream and calling it a balanced dinner because there's a salad on the side. 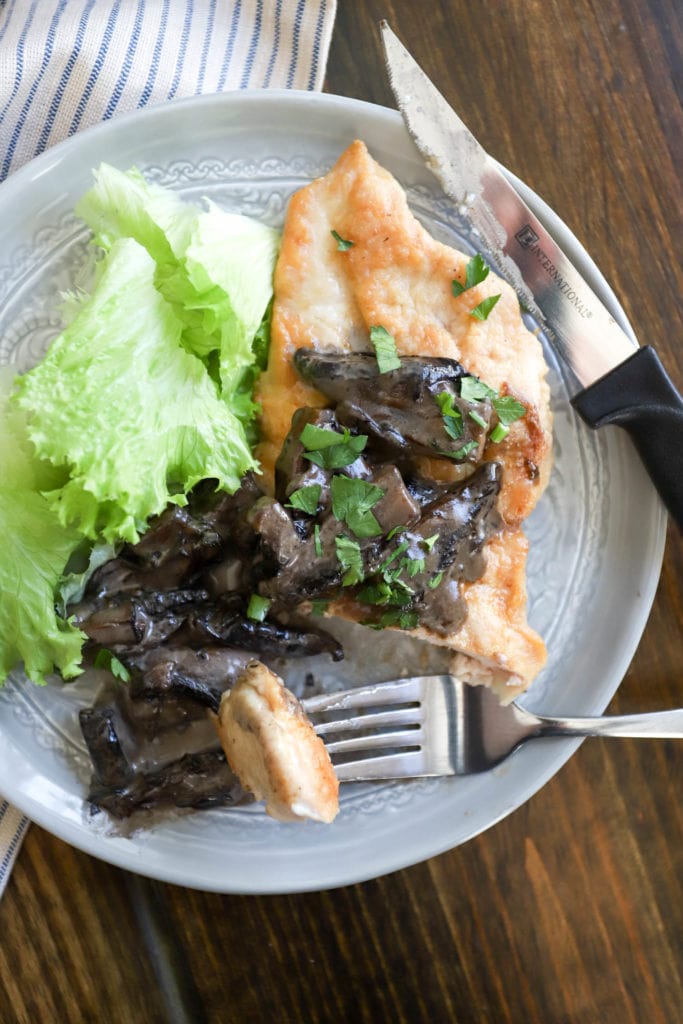 I am not about shaming relating to food in general, but if there was ever a time to indulge, a birthday is it, right? Of course, this year, my birthday is Wednesday, the most anticlimactic of days, and there's work and toddler things and it's raining and in that case we just absolutely need to have a delicious, tasty, SIMPLE meal. (it should also be noted that I had a lovely birthday celebration on Saturday with my family and got some super duper generous and fun presents) It has very few ingredients, so they all matter a lot - salted butter, fresh portobellos, heavy cream. Things that are great on their own and super delicious when combined.

The method is simple and stolen somewhat from Lydia's Kitchen, which we've been enjoying a lot on Amazon. Her presence calms me, as does her pasta. The chicken is dredged super quickly in a little flour, then pan-fried in oil and butter. When it's done, the same skillet is used to make a 5-minute mushroom sauce, then we pour cream into the skillet and dinner is done in seriously 20 minutes. I think a super simple side salad is very European, but if anyone made this for me over, say, buttered pasta I wouldn't necessarily be pissed about it.

You need chicken - boneless, skinless, thin-cut pieces of breast, or cut regular chicken breasts in half crosswise so they are thinner for quicker cooking. Then it's olive oil and butter for cooking, flour, salt, pepper for dredging, and portobello caps and heavy cream for the sauce. 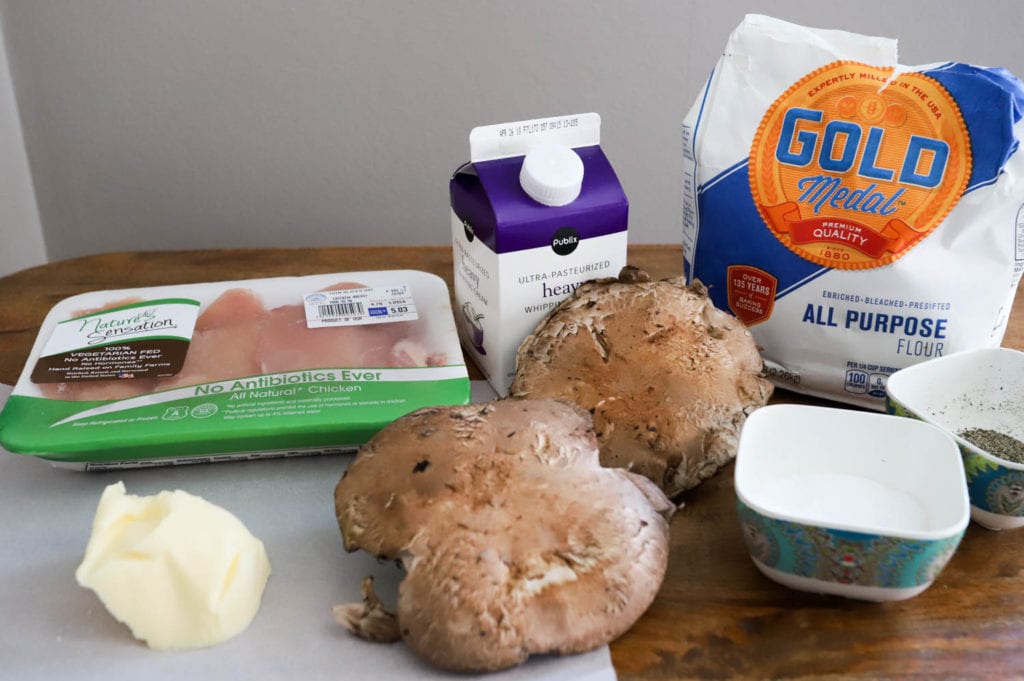 To start, preheat a large skillet to medium heat with the butter. We want the chicken to get golden but not overly brown and cook through at the same time. While that's happening, use a fork to mix salt and pepper into the flour in a shallow plate or bowl. When the pan is hot but the oil/butter isn't smoking, quickly dip the chicken in the flour mixture and place it in the skillet. 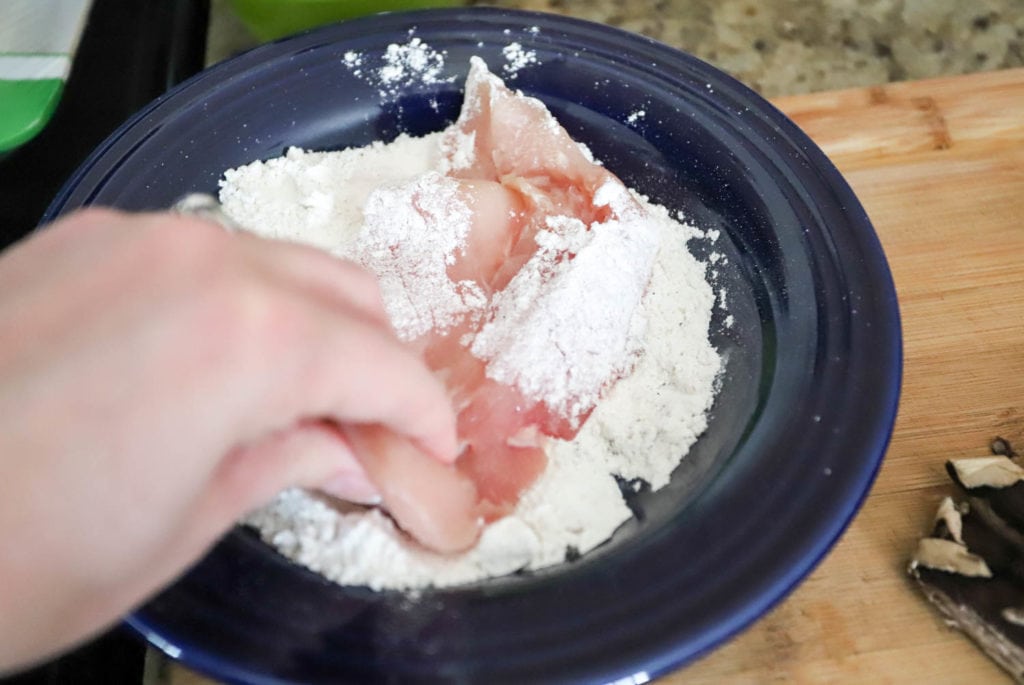 My package of chicken had three pieces which was perfect for our family, but this dish is easily made with four or more pieces of chicken, just be sure you use a skillet large enough for it. When you place the chicken in the pan, let it sit for 4 minutes before flipping - you can see it start to cook up the edges during this time. 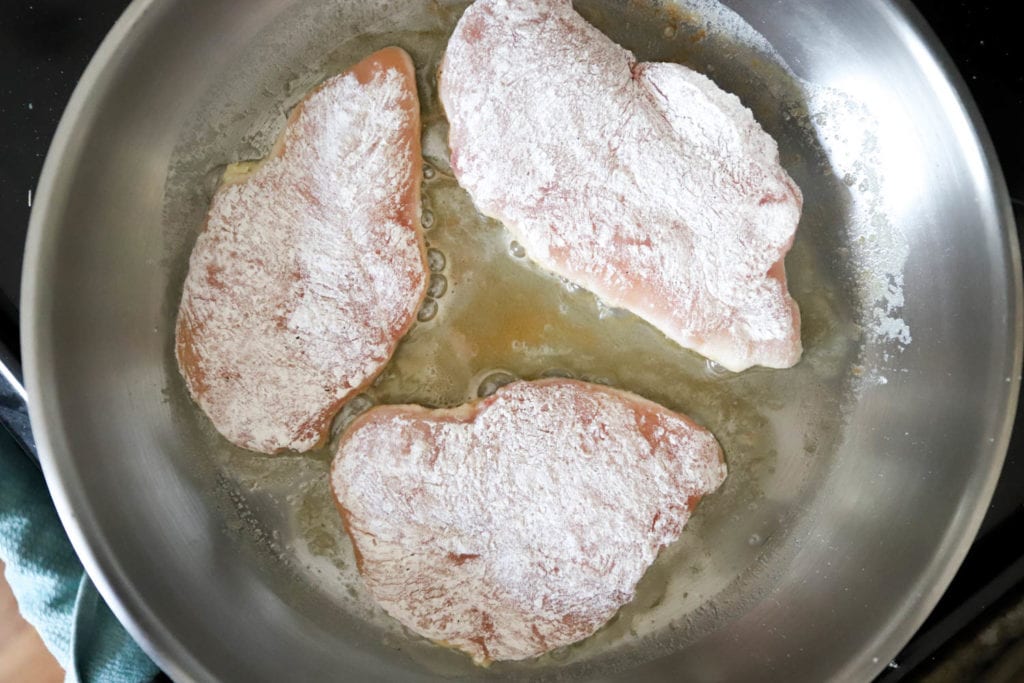 While the chicken is cooking, chop the portobellos into bite-sized pieces. I cut them in half and then slice the halves to thin pieces, but any way you want to chop them is fine. Let the chicken finish cooking for 4 minutes on the second side until the chicken is cooked through and a light brown crust has formed. 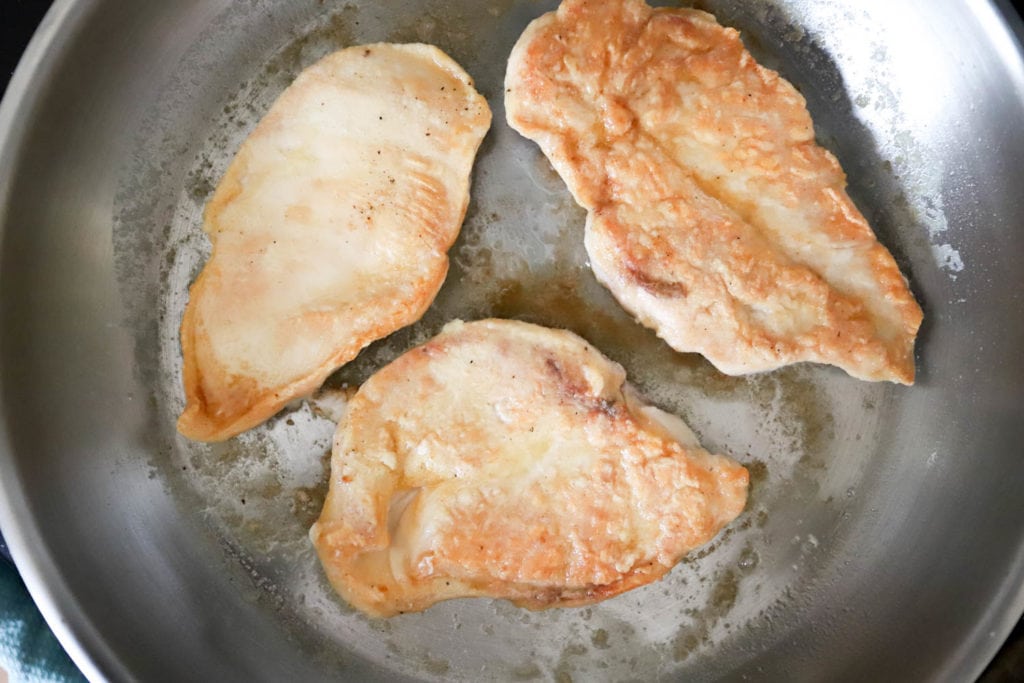 When the chicken is done, immediately take it out of the plan and let it rest on a plate while you make the mushroom sauce. Add the mushrooms to the same skillet with a sprinkle of salt, and stir them for about 3 minutes to brown and wilt them. Add another tablespoon of butter and use it to scrap up any chicken bits from the bottom of the skillet. This is literally so easy a toddler can do it. 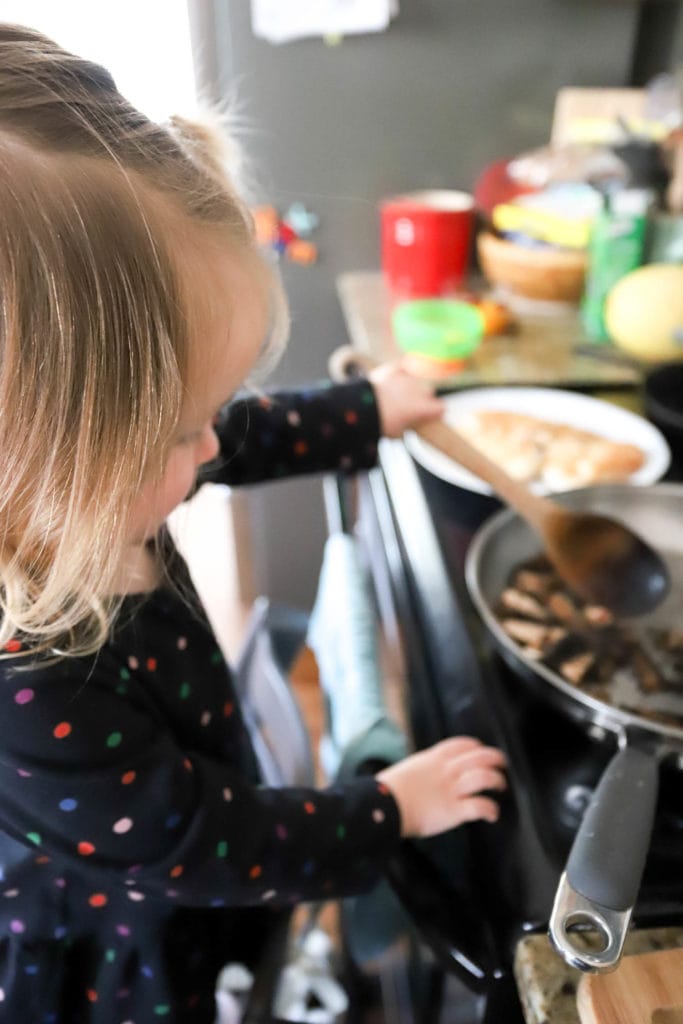 When the mushrooms are wilted, add ½ cup of cream to the mushrooms and turn the heat off the skillet. Taste the sauce and add salt and pepper to your preference, then serve the mushrooms immediately over the chicken with any side dish you'd like. 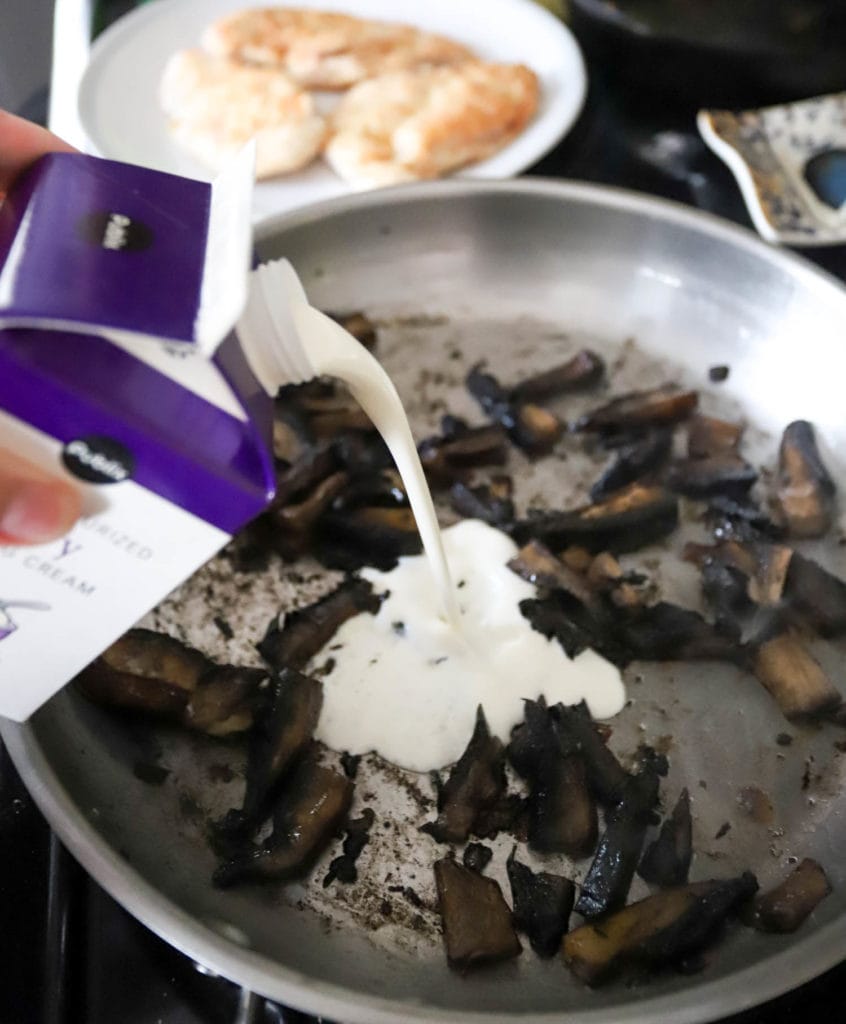 I know it doesn't seem like much, but the crispy chicken with earthy mushrooms and cream to round it all out....it works so well, and only takes a few minutes. The sauce is rich and glossy from the cream and works so well with the crust we created on the chicken. 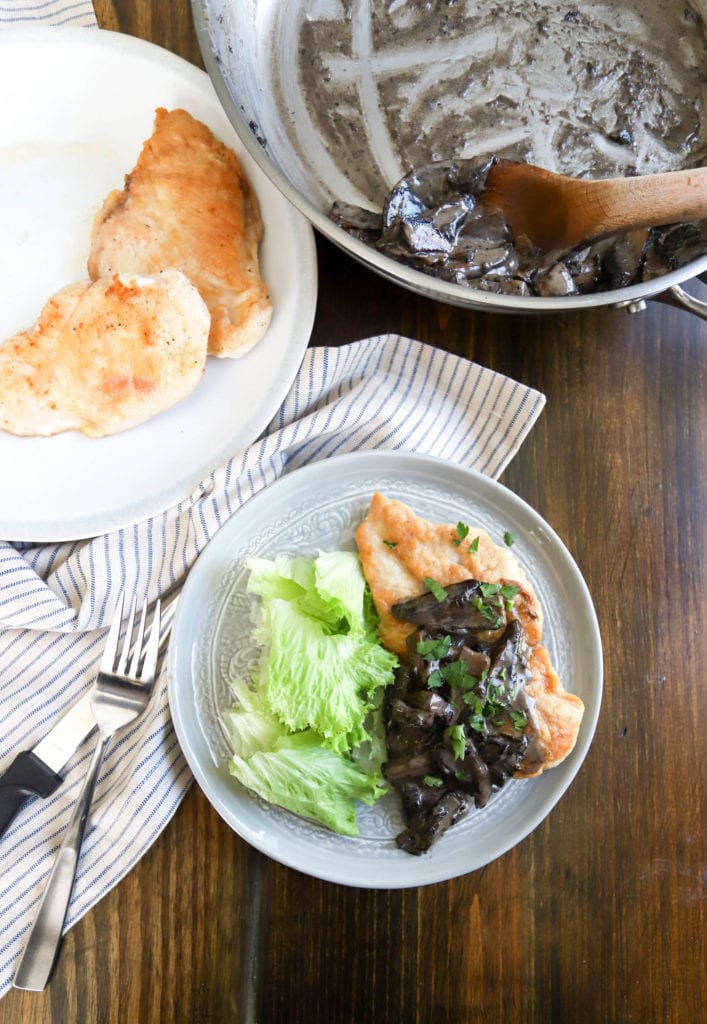 Add a veggie on the side, and dinner is done! 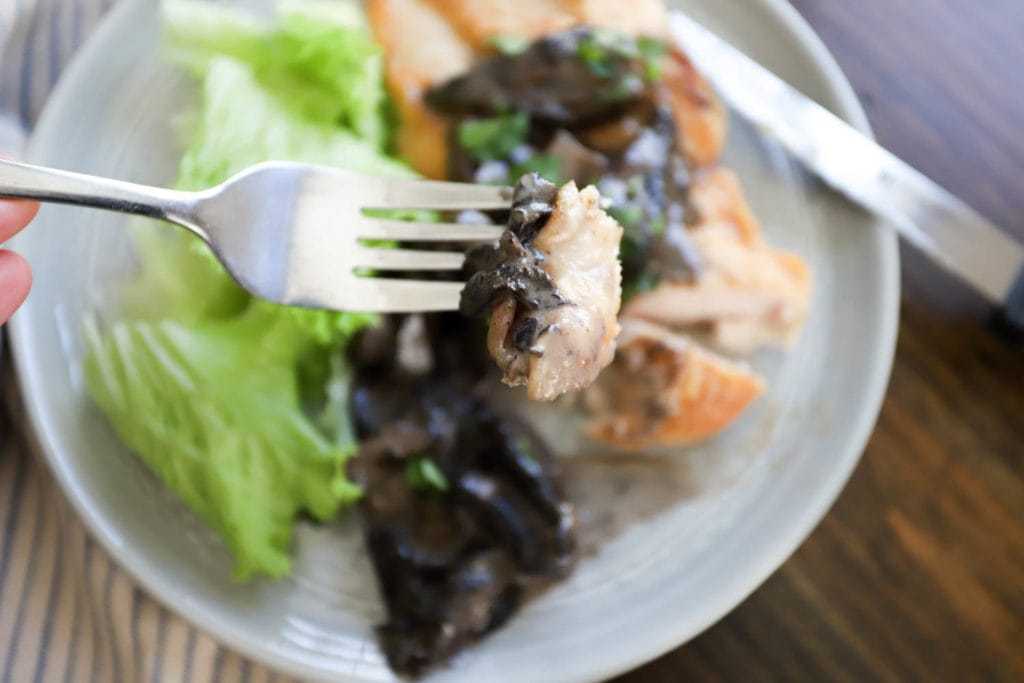 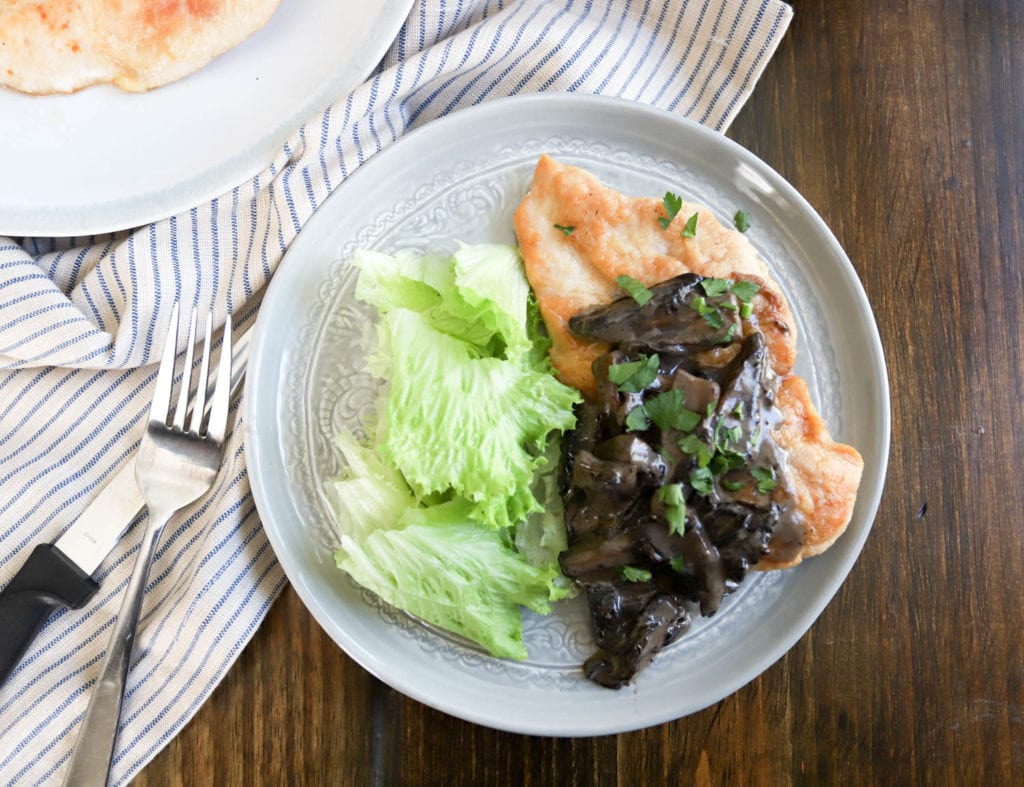 « Simple Pan-Seared Parmesan Brussels
Fight Like the Kid is Sleeping »