My HEAVENS, this child is so visually appealing I can't even stand it.

And, if you know me, you know I'm not a big fan AT ALL of only focusing on how kids look, and we know several people (don't get offended, look inward) who literally cannot talk to a child unless they are commenting on their looks. So I go all opposite with how smart they are.

BUT. This child is seriously adorable, and I credit it to the expressions. He's hilarious, knows it, makes it work for him. Tres expressive.

Ten months! Was over a week ago but Labor Day means that we lose a week like daylight savings but entire days and we operate with a lot of self-forgiveness around here. We are in such a wonderful groove with Will, minus a teensy cold and a few nights of being resistant to sleep, he's so much fun to be around.

The highlight of his LIFE remains his family, and we all get some variation of full-body quaking and grinning and squawking when Jay, Beck or I walk near him. In true second child fashion, Will is much more content to be near us than away from us, and loves to be talked to, tickled, or engaged with in any way. Laughing is definitely his favorite activity (like literally Smiling Is My Favorite), and often he'll look at us in a way where he is practically asking for some sort of joke game, peek-a-boo or tickle fight to include him so that he can get in on the action. 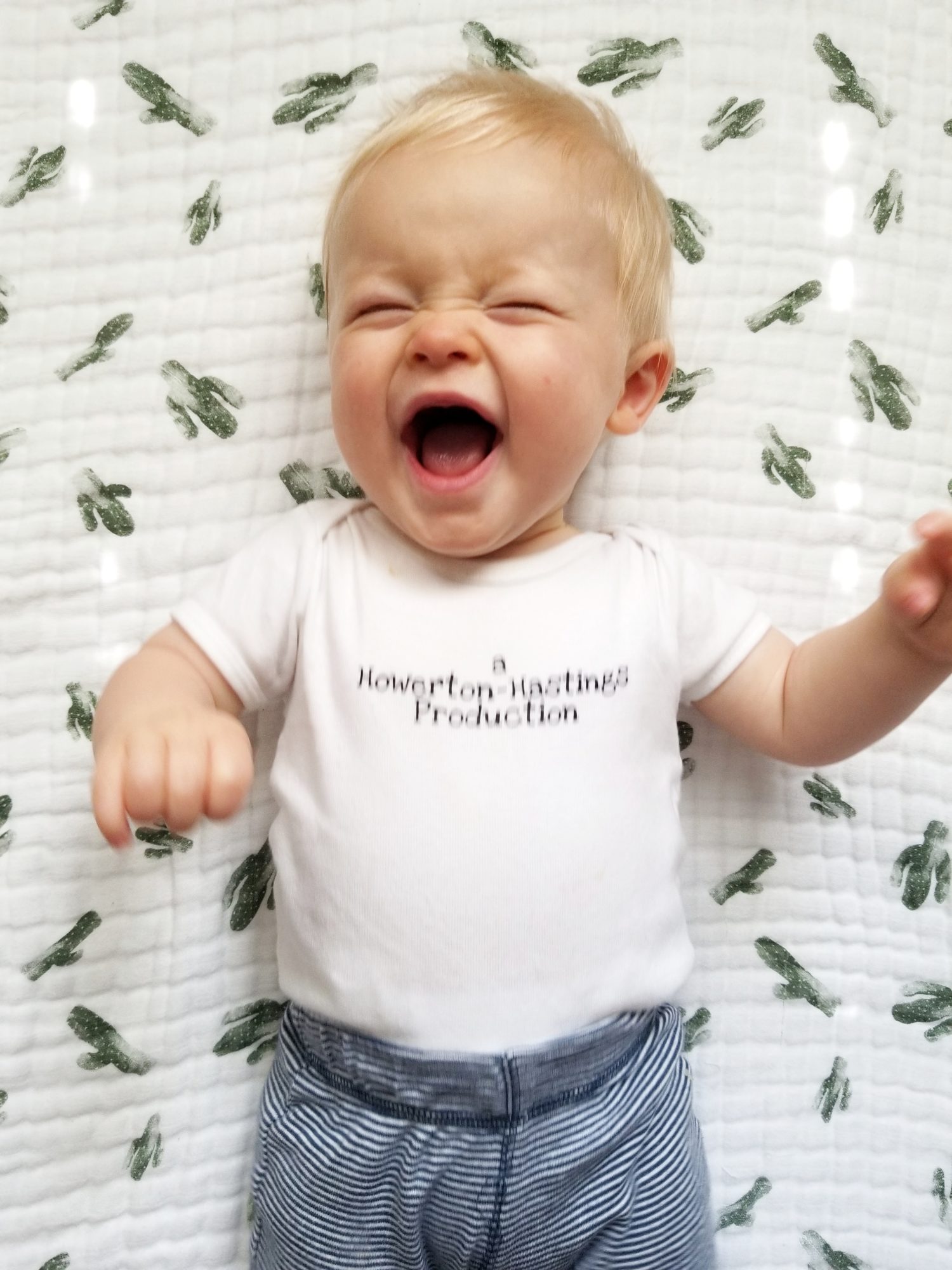 He and Beck have more and more of a really sweet relationship, likely due to the fact that he can't crawl yet and take her stuff. However, she has absolutely started taking things from him, which is frustrating but normal, I suppose. He doesn't seem to care yet, but I do because clearly her taking anything from him isn't fine, so working on that one. She only wants the Best, Newest, Shiniest baby toys too, of course. Beyond stealing from her little brother, though, Beck is super duper into All Things Will. She helps get him up in the morning, talks to him when I'm getting ready to go places, hands him (dirty, old) toys when he drops them, and shares any food that she deems not good enough for herself, such as a blueberry with a hint of mush to it.

She also explains things about the world to Will, and I just die overhearing their conversations. She will look at him SO seriously and say "Ok, Will, we are going to have a sleepover at Granny B's house, and we are going to do all kinds of activities, and it's going to be SO much fun, you're going to love it." He looks back at her in a really active-listening kind of way, and whataskill to be so convincing when you can't understand a word that the person is saying. It's so funny and I love that she talks to him like a little person. 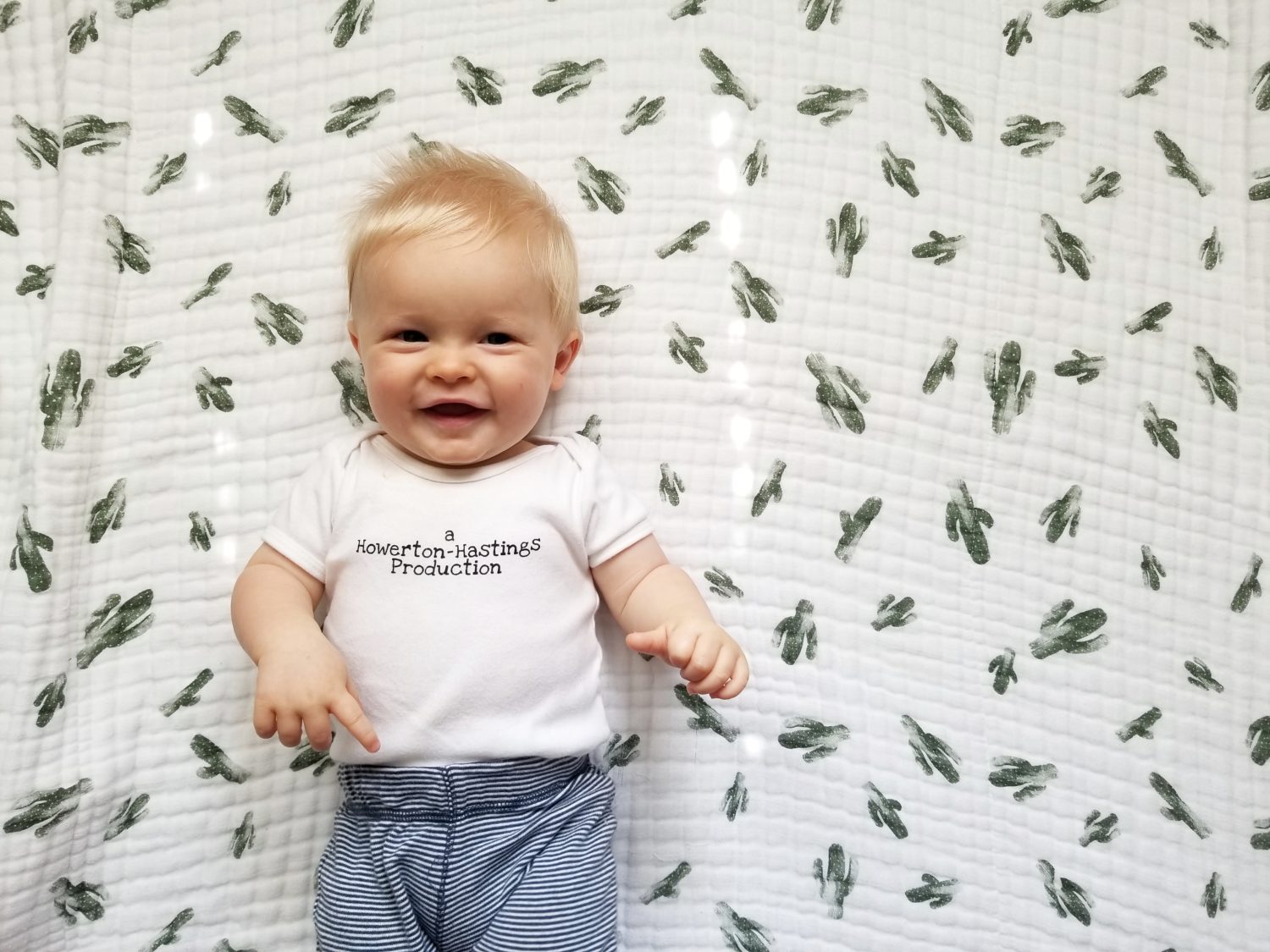 Even though he can't talk yet, he's definitely starting to understand some words and tone. He knows how to clap (see image), and claps when someone says "yay!" or "clapping," so we have understanding of ONE word! He babbles all the time in a timbre that sounds like regular speech minus any words, and it's so funny. Beck learning to talk was a huge highlight of her life for me, and I'm really excited for Will to get a few words that I can understand! 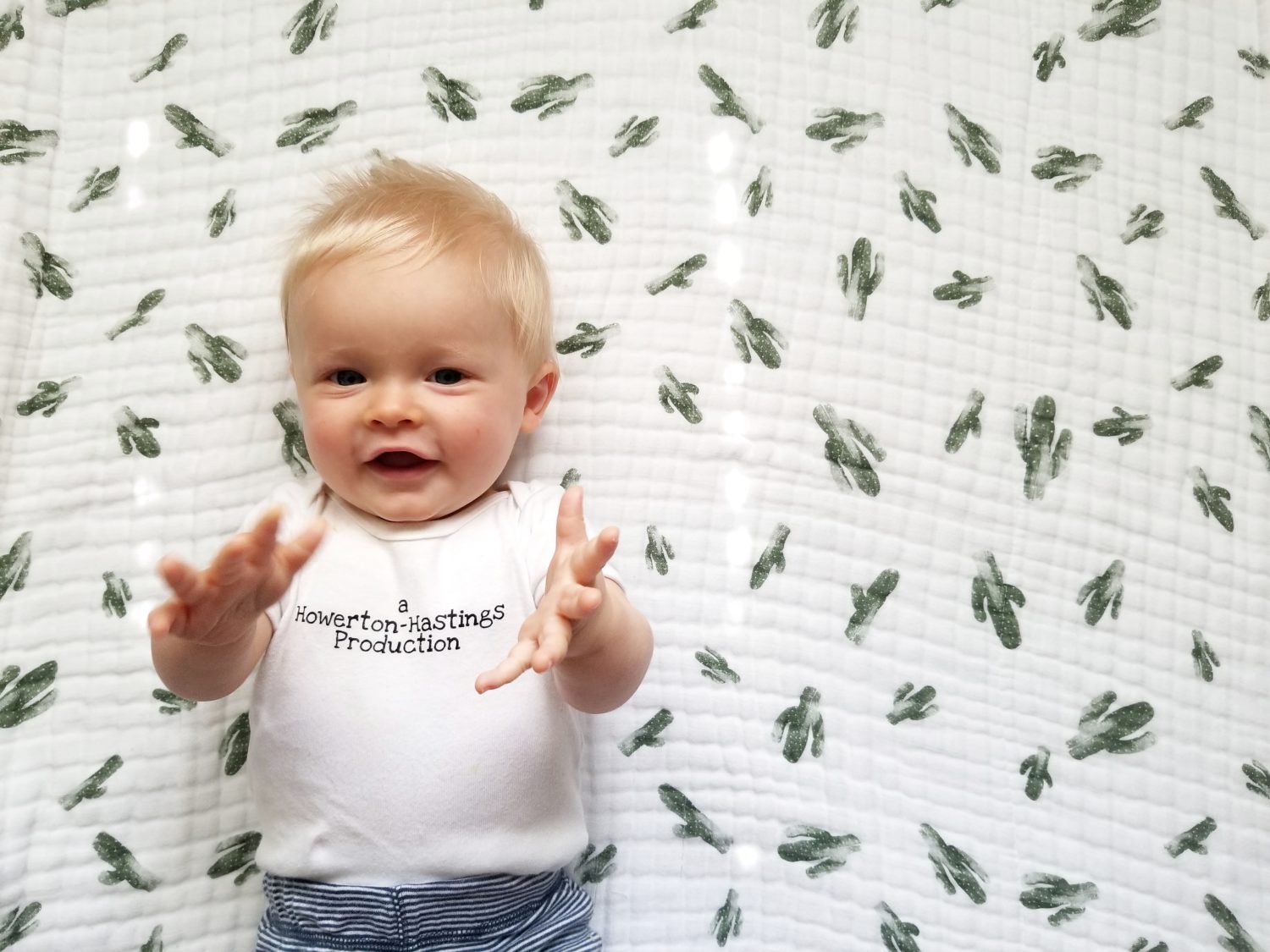 SPEAKING OF TALKING, homeboy has also recently been introduced to a stern "no" for the following two things: Biting my nipple HARD and grinning, and throwing his juice on the ground and grinning. This kid is already trouble, and yes I do think it's fine to correct behavior that is never going to be ok, do not make jokes about my kid biting nipples. I know there are some people who try to never use the word "no" for their children and if that works for you, great! I am not that person.

Feeding is getting more and more fun, and this month I haven't pureed anything at all for this little guy. He'll still be happily spoonfed so we still give him some soft things like applesauce, yogurt, and mashed potatoes, but if he CAN pick it up himself he definitely will, and just in the last two weeks has gotten super adept with his little pincer grasp, aka the cutest thing ever for a little thumb and finger to do. He eats cheerios, corn, peas, blueberries, ham, chicken, sweet potatoes, and little bits of pancakes all on his own, with new foods being added all the time. He's really proud of himself and makes some VERY specific grunts if food isn't plopped down for him fast enough. 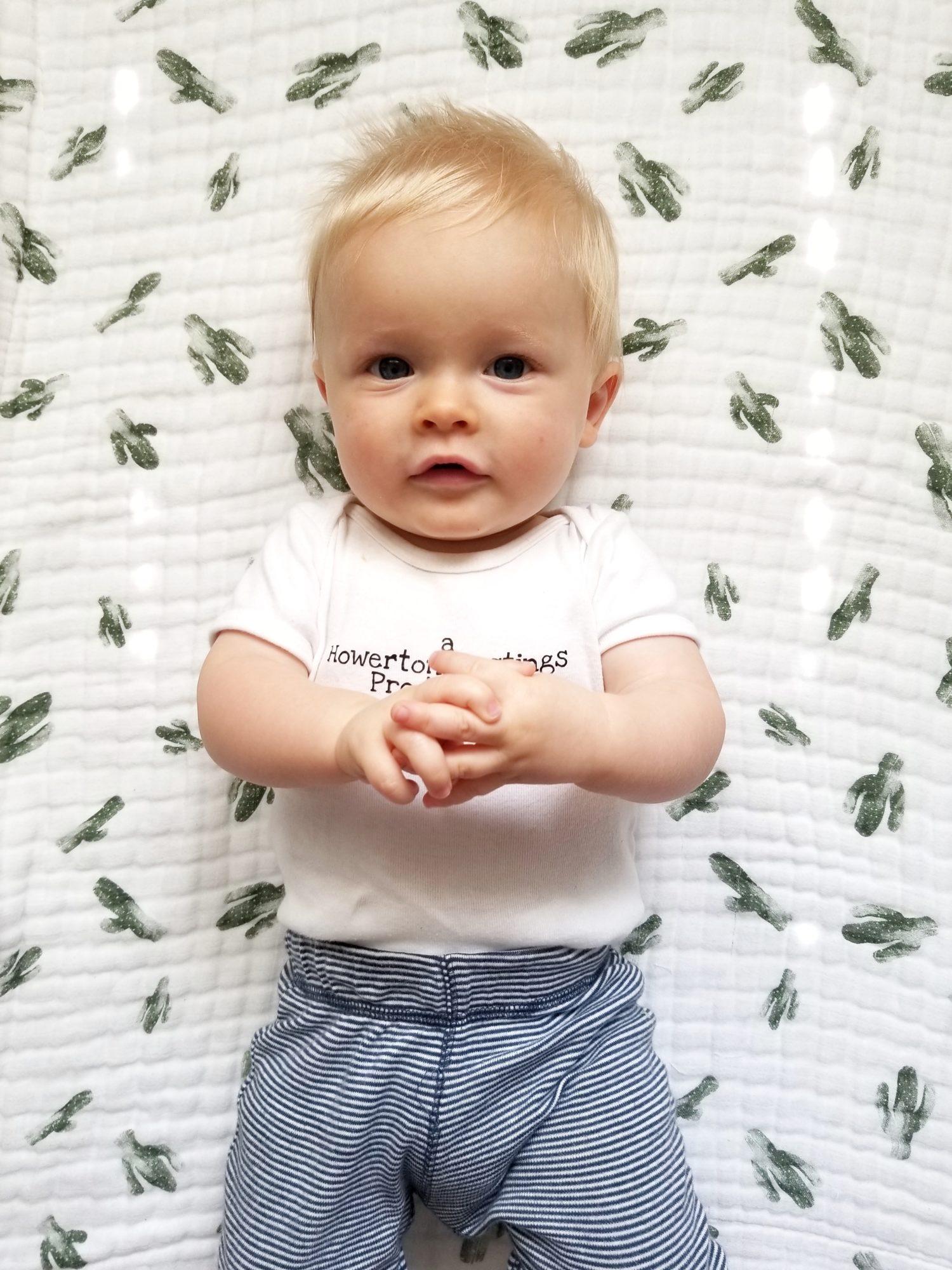 Besides one grandparent sleepover a few weeks ago, Will and I haven't been apart much, and I'm really glad that I've gotten some extra time with him recently now that Beck is back in school. He's at a "high maintenance but SO much fun" stage so I definitely need and take breaks, but returning to him anytime we've been separated is just the biggest joy. 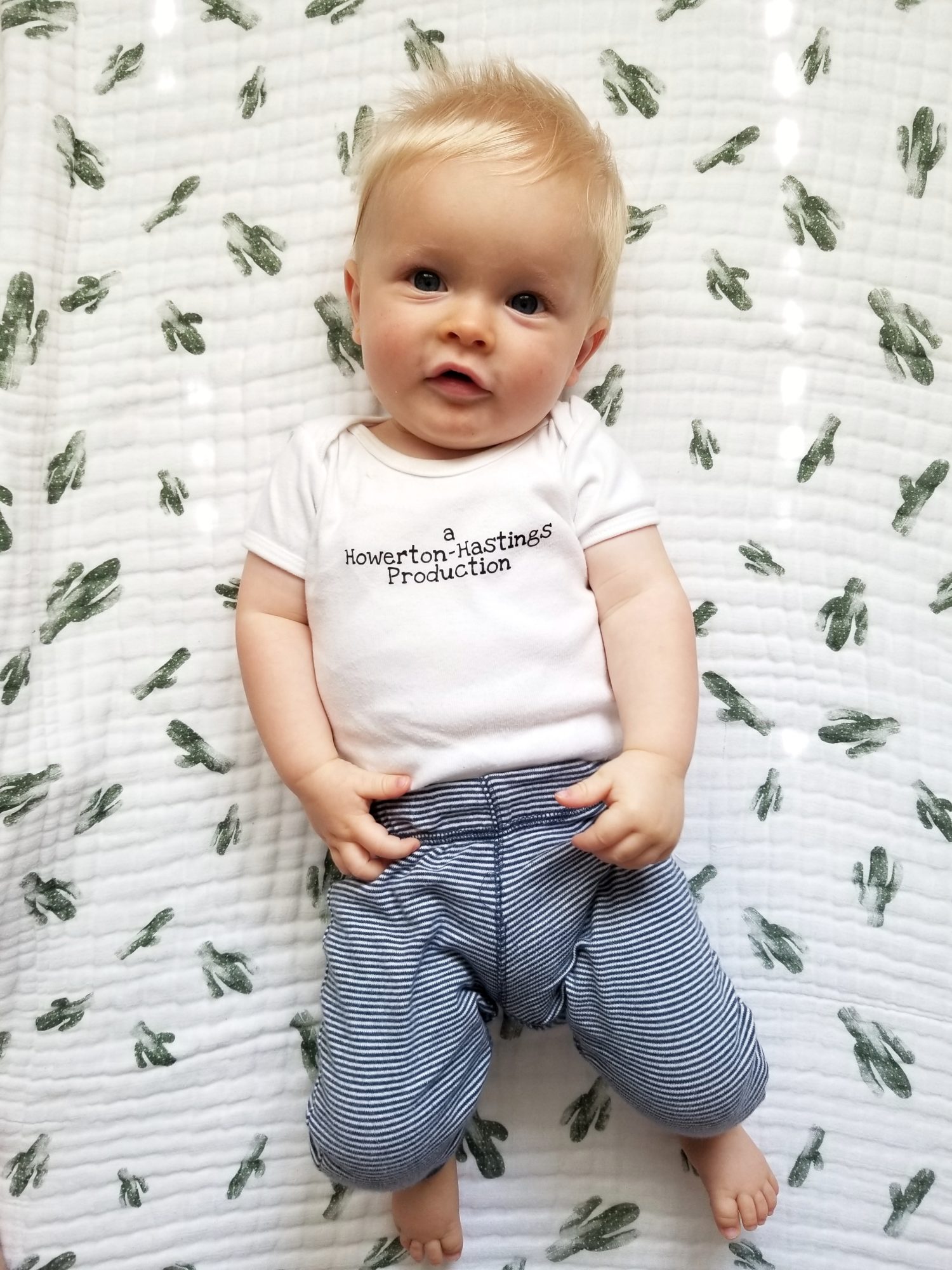 Up next annnnny day: crawling, which I can't wait for and dread all at once. It is suuuper nice to be in a stage where Will can plan on his own on the floor while I do things BUT can't go anywhere without assistance. It's the ideal baby phase, like 76F outside. He is is the early fall of babies, and he is such a nugget of love added to our little family that I can hardly stand it. Which I typed in the very first line of this post, and am going to leave in place because the truth can be redundant.