So, we went to New York!  Like we do every year for the last show of the music competition (ICCA) I produce.

This year was one of the stranger trips we've had.  Beck was with us, which was strange but great, of course, and we had a GREAT time on Friday.  But then on Saturday (the day I work on the show and Jay is usually on his own) or dog got super sick and we honestly didn't know if he was going to make it, so we spent most of the day worrying about him and changing our flights so we could get home earlier just in case.  And....that was kind of it!

But let's talk about Friday, because that was a very wonderful day. 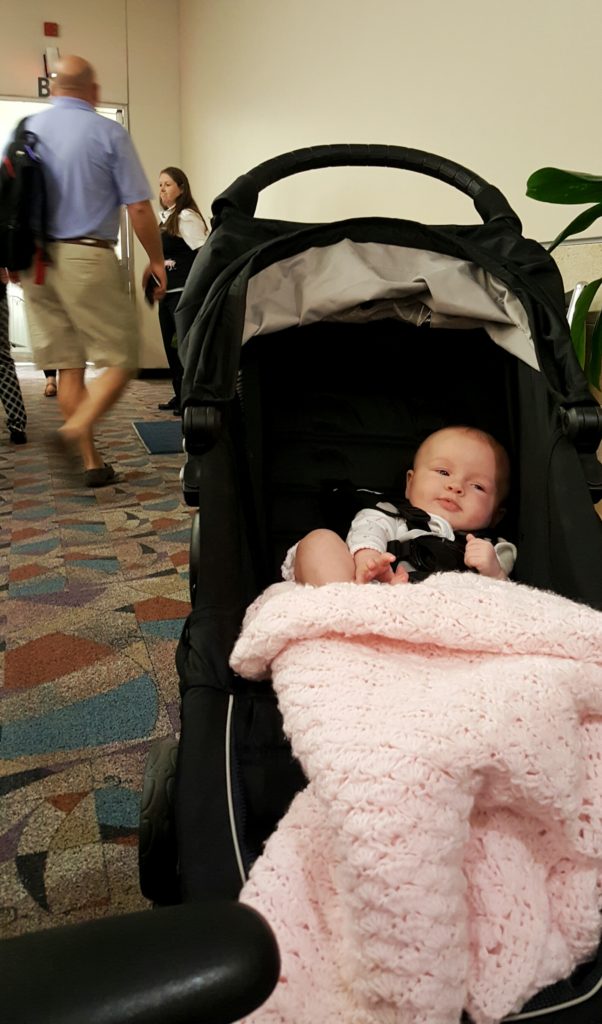 We knew that we wanted to fly direct to Laguardia if at all possible to minimize travel time with Beck.  In order to do that we had to take a 6:20am flight, which WHOA is early.  We ended up just staying up after around 4am when Beck woke up to eat, and she was cheerful and GREAT through security and all that.  For those of you keeping track, we ended up traveling with our stroller, the Ergobaby carrier, and some breastmilk.  No car seat, it was just too much to barely need it, and we don't regret that decision at all.  Security was a breeze on both ends with all of that stuff, and we were baaaaasically on time, in the city at 8:30 and walking around near our hotel in the Upper West Side by 9am!  Beck was a champion on the plane and didn't seem to have any ear issues.  She nursed, cooed, slept, and was no trouble at all.  The only time on both flights she got a little fussy was when we were waiting to deplane, and I kind of get fussy in those moments too.  Why does it take so long?  WHY? 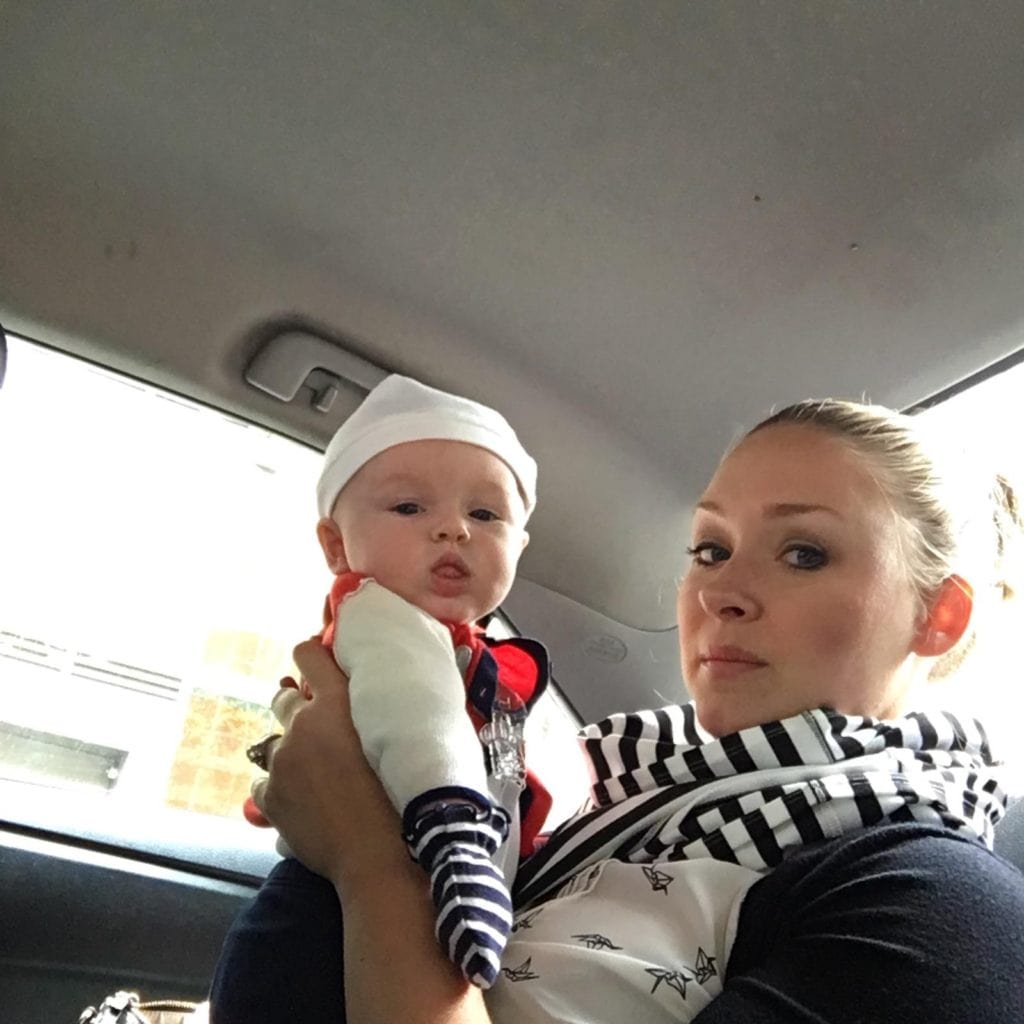 Since we got into the city so early we couldn't check into our hotel, so we dropped our bags with the bellman and headed out to explore our part of the city.  We ate breakfast at Nice Matin, which was good and bustling and had a great city feel.  The food (we had the Gruyere omelette, bread basket, bacon, and fruit) was fine but nothing special, but our waitress was great and the green tea was lovely.  It was COLD and gray when we got to the city, and the restaurant was really warm and inviting.  If you enjoy eggs + pastries for breakfast I'd recommend it. 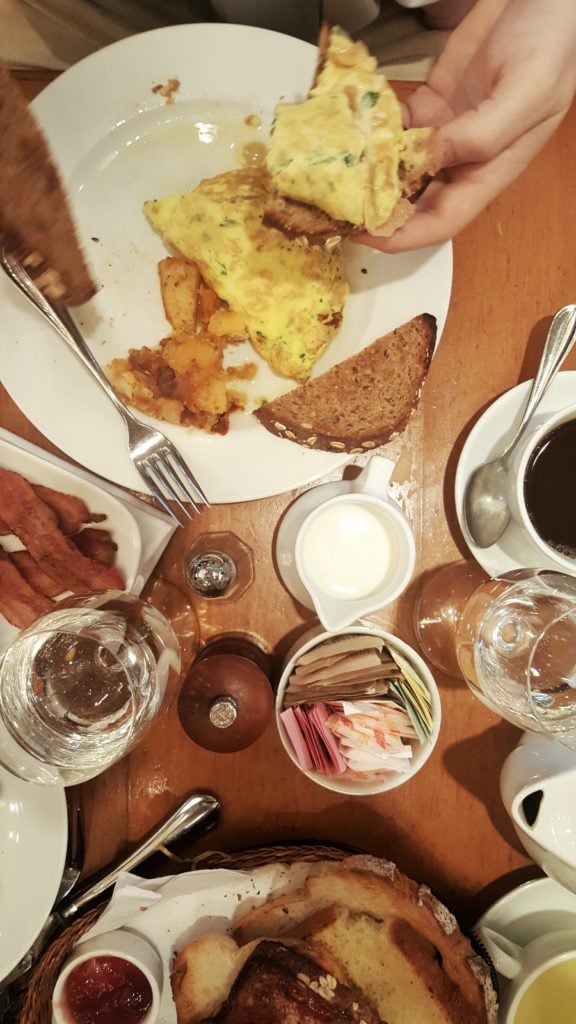 After breakfast we walked allll through Central Park which was great, maybe one of my favorite memories of the trip just for its simplicity.  Beck was sound asleep in the Ergo with Jay, he and I held hands, and I was just sappy and lovey about how nice it was that the three of us were there together this year! 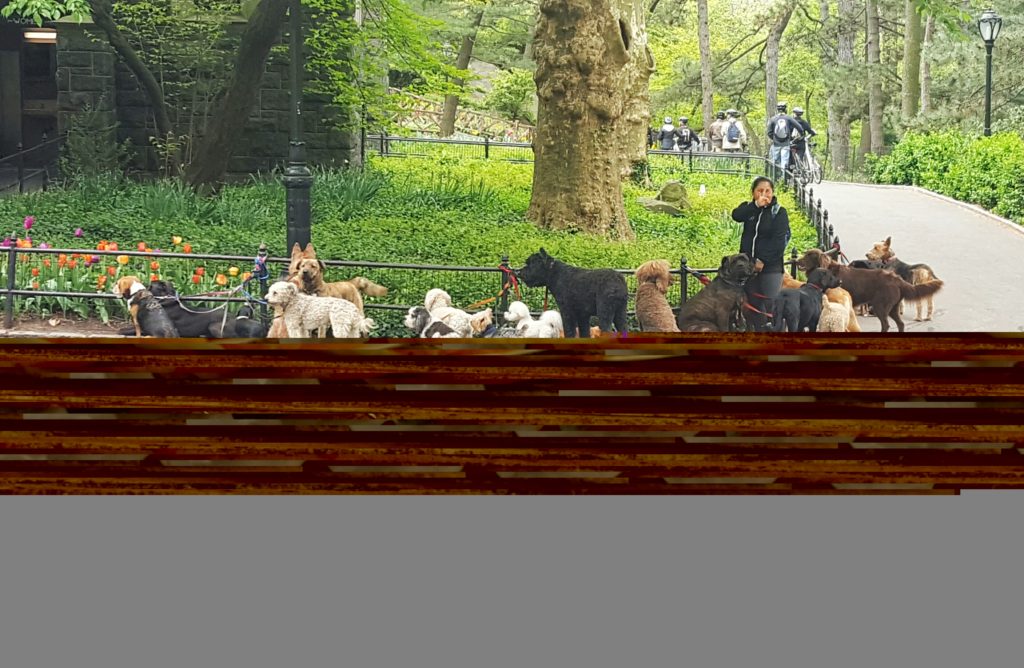 We walked for about 2 hours in the morning, then went back to the hotel where we were granted an early check-in due to our affliction of Having Baby.  It's kind of nice when it comes to not wanting to wait until 3pm to put your stuff down, you know?  We stayed at Hotel Belleclaire this year, got a great price on Hotels.com (the only place I ever book hotels, legit, not sponsored, just what I do), and really enjoyed the room size and service.  We did notice that the halls smelled like hash browns kind of a lot, which could be a pro or con based on your fried potato stance.  We didn't mind it. 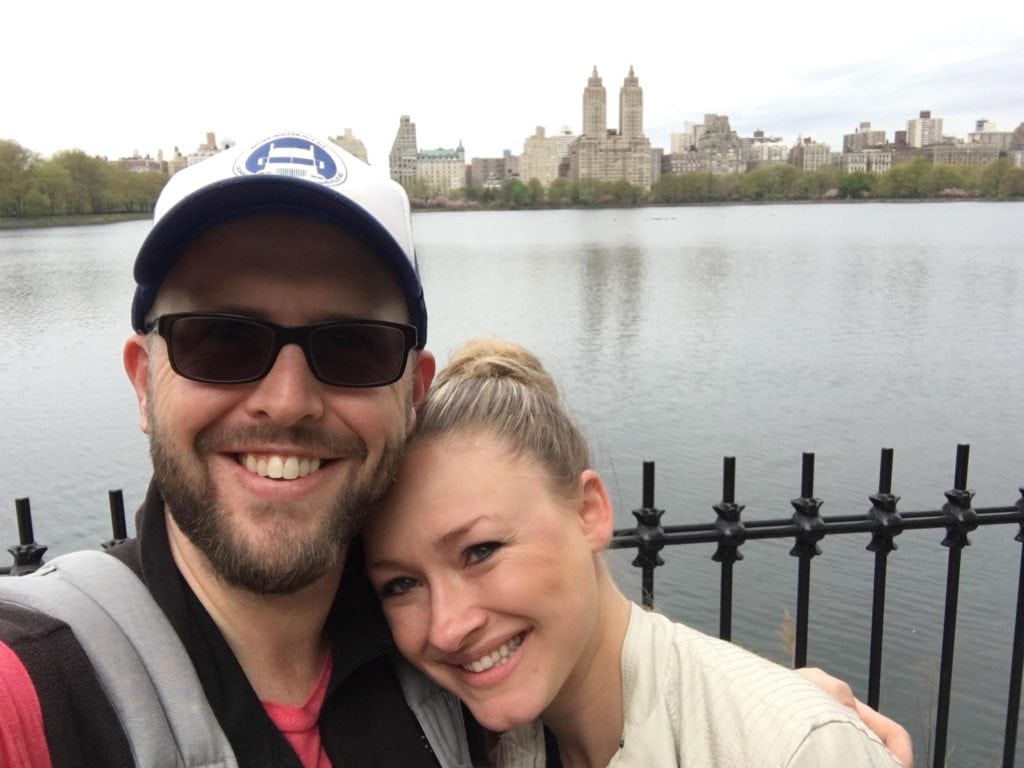 For lunch on Friday we had our maiden voyage to Shake Shack, which was incredible if incredibly busy.  Why don't they just open 10,000 locations like Chik fil A to give out-of-towners a fighting chance?  That ish was BUSY, but I stood precariously over someone until they got up and Jay backhanded an old lady so we could sit down.  Not really, but kind of.  We both got a basic burger and I got cheese fries.  Yes, yes, yes.  As advertised, IMO, very delicious, affordable, and I think if we didn't go right smack at lunchtime on a Friday we'd have enjoyed it even more.  We'll be back for more, Shake Shack! 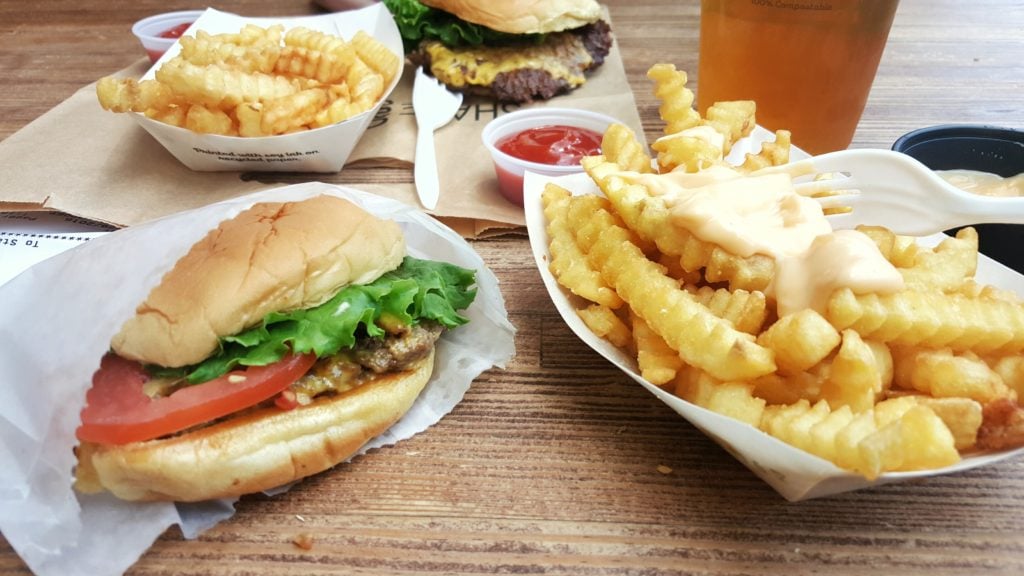 Friday afternoon involved the yearly Walk Down The Island, which was cut sliiiightly short this year due to the fact that we had a bebe and nursing in cabs is incredibly convenient. 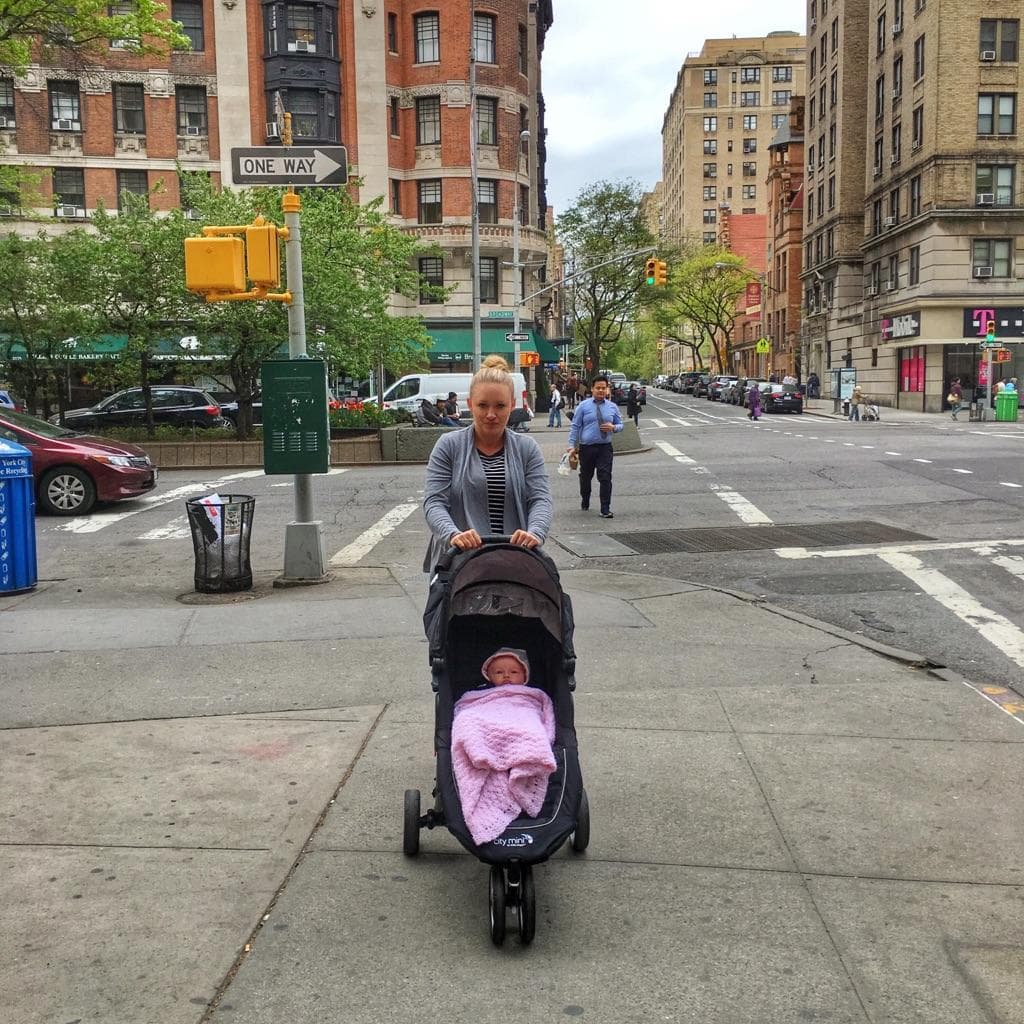 We were meeting our friend Dan to head to Hoboken for the evening way at the south tip of Manhattan, so we walked the first 40 blocks down, then hopped a cab to get him.  From there Beck took her first ferry to New Jersey, and we met up with Dan's wife and 2 girls for dinner at Margherita's, one of the better Italian places we've eaten on our trips to NYC.  I rarely enjoy Italian in restaurants, but NYC/NJ Italian is a huge exception to that rule.  Margherita's is one of Dan and Meredith's favorites, it's BYOB, they know their girls and give them free stuff, it was just GREAT.  I got Chicken Arrabiata, and it was SO good.  Spicy, salty, acidic, all the best parts of great Italian food. 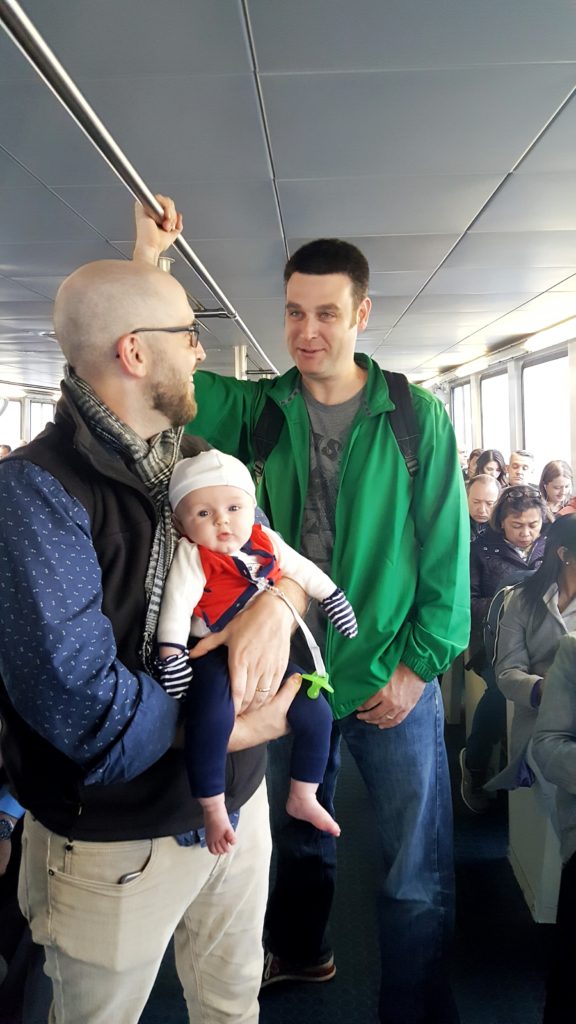 We finally hustled back to our hotel laaaaaate Friday night, with Beck being a champion through it all.  She ended her streak by being up most of the night in the hotel, but we sort of expected that because it was a weird new place and her sleep was way off, etc.  Babies, right? 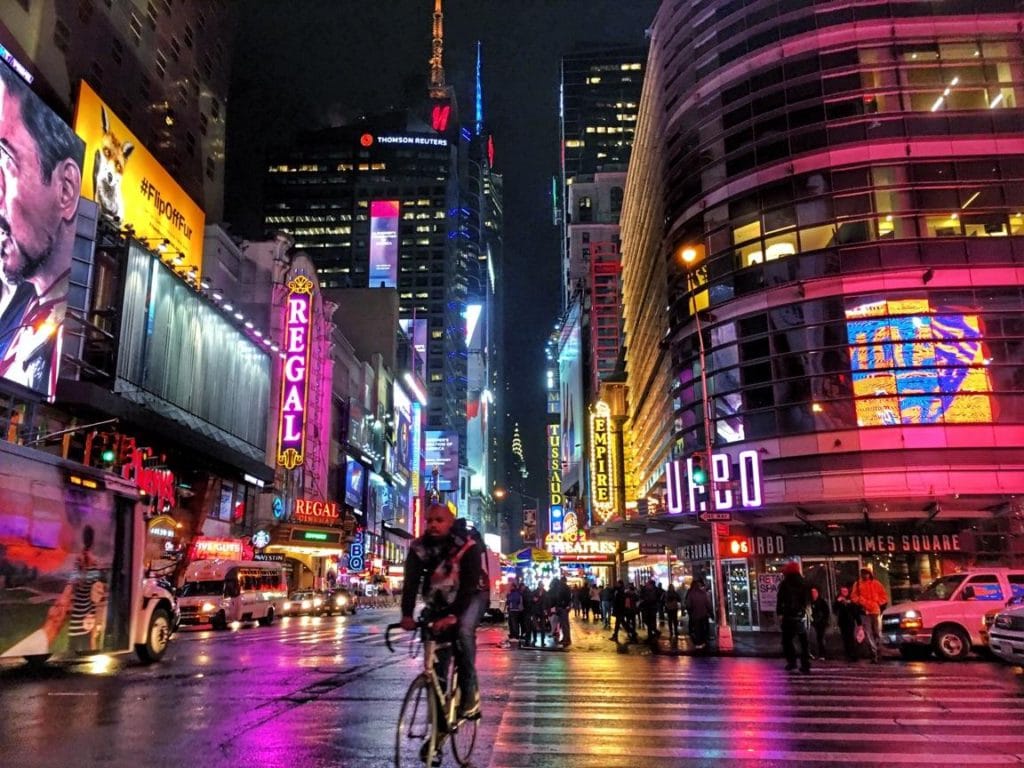 Saturday was when things got weird, the day was almost a complete wash due to the back and forth with my parents, Jay, the vet, and a ton of unknowns about our dog.  He's fine now, thank goodness, but it wasn't looking good AT ALL Saturday.  I had brunch at The Smith with the Varsity Vocals staff, which was excellent, and met Jay for a late lunch at Artie's.  One of our goals this trip was to get some great deli food, and we LOVED this place.  It felt super retro-diner-ish, and we shared chicken liver (ew), a pastrami sandwich (hell yeah), and latkes (omg yes).  We kind of knew we wouldn't like the chicken liver but wanted to try it anyway, and the rest of the food was absolutely fantastic.  House made pickles and slaw came with the meal, and we discussed sitting there for the rest of the afternoon in order to keep trying things. 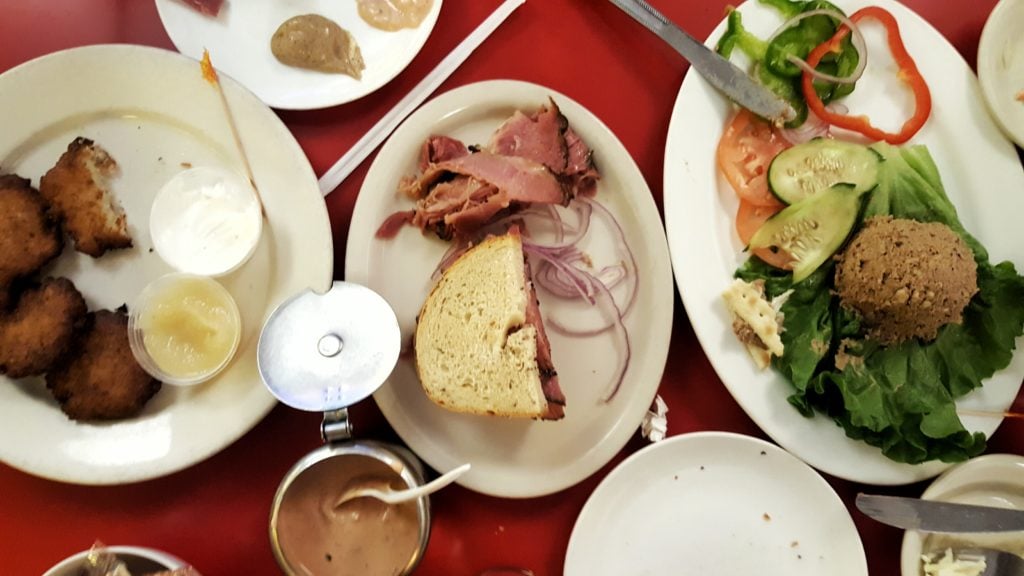 Saturday night was our show at The Beacon Theater, and, while I was worried about Jake, it was wonderful to see the hard work the kids have put in all year and really enjoy the music.  My region had 2 groups represented that night, and they were both SO good.  We usually go out with everyone after the show but had a super early flight to get back to our buddy, so after the show I gave lots of quick hugs and ran back to the hotel to be with Jay. 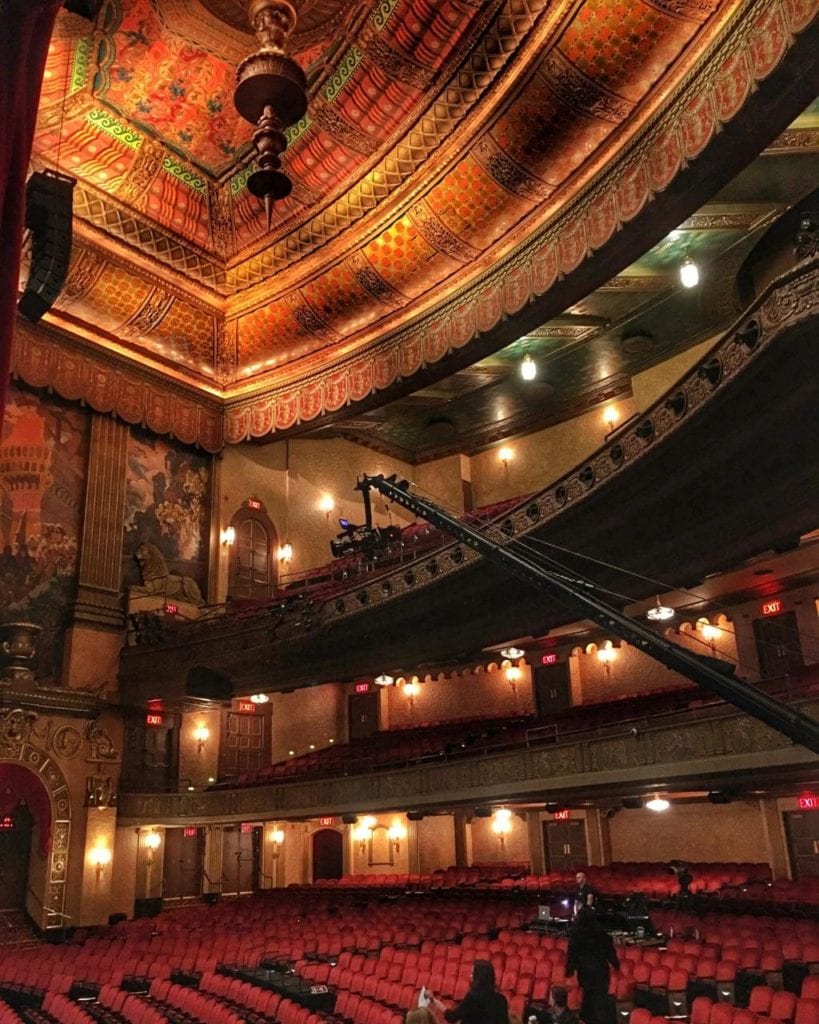 And that was it!  We're already planning next year, which miiiiiight be omgbabyfree.  Might.  I think at a year and 4 months I'll be like "can the dogs just watch her?" so we're definitely looking forward to it. 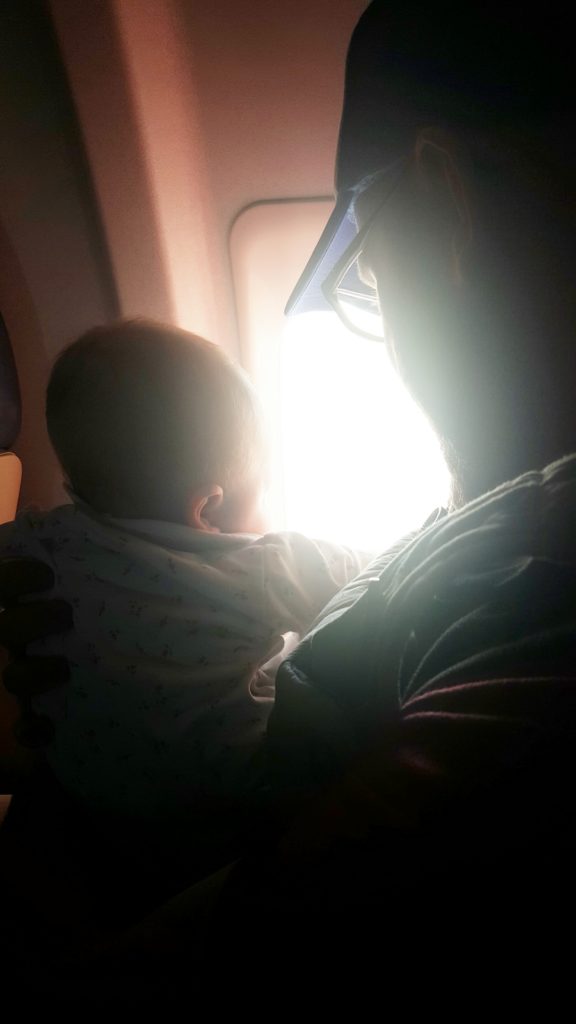 Until next year, big city!