So, after our first epic day eating our way through downtown, we decided on Sunday to get out of the city.  Jay wanted to see the mountains we could see from our hotel room, and the Rockies are only 30 or so miles away, so while we were at brunch we made the decision to stay away from downtown for the first part of the day. 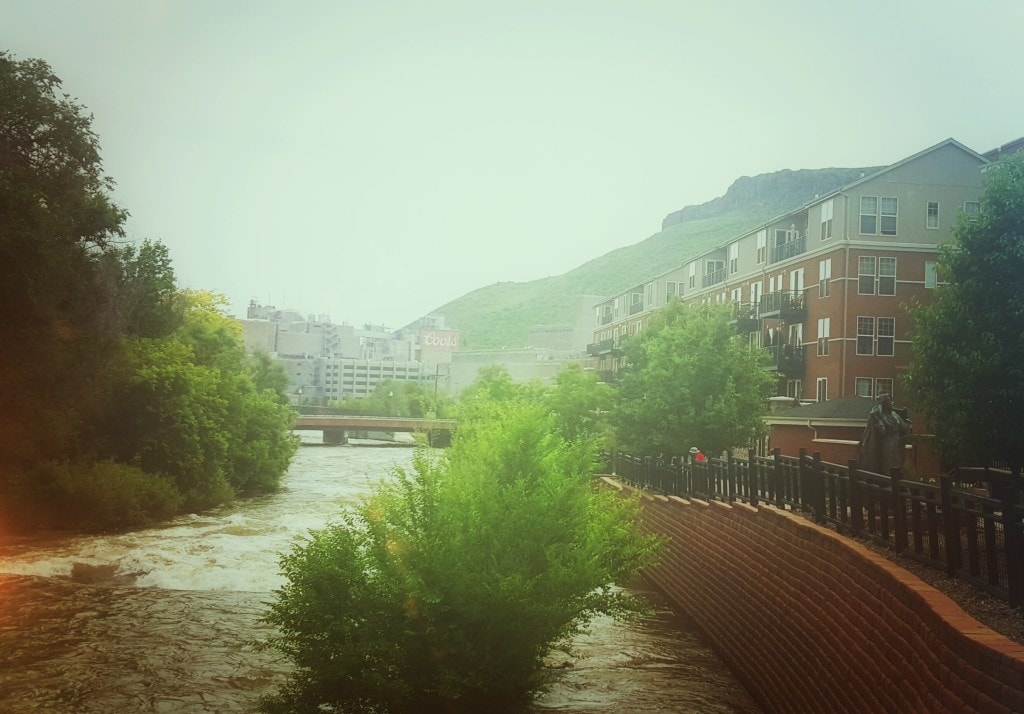 We had brunch at Root Down, which opened at 10 but we got there at 9:30 because jet lag and GOOD THING, because we totes forgot that it was Father's Day and also this was a super popular place.  As per our method, we shared everything, and as per the Denver norm, we loved everything.  Our server was actually from North Carolina, so we felt like we had a kindred spirit in her.  She must have agreed, because she sent us house made chocolate caramels at the end of the meal which were RIDICULOUSLY good.  Like...melt in your mouth bites of sex in a really good way.  For our meal, though, we shared a small order of the house specialty gluten free pancake, which was light and fluffy and we actually forgot it was gluten free (not that we care). 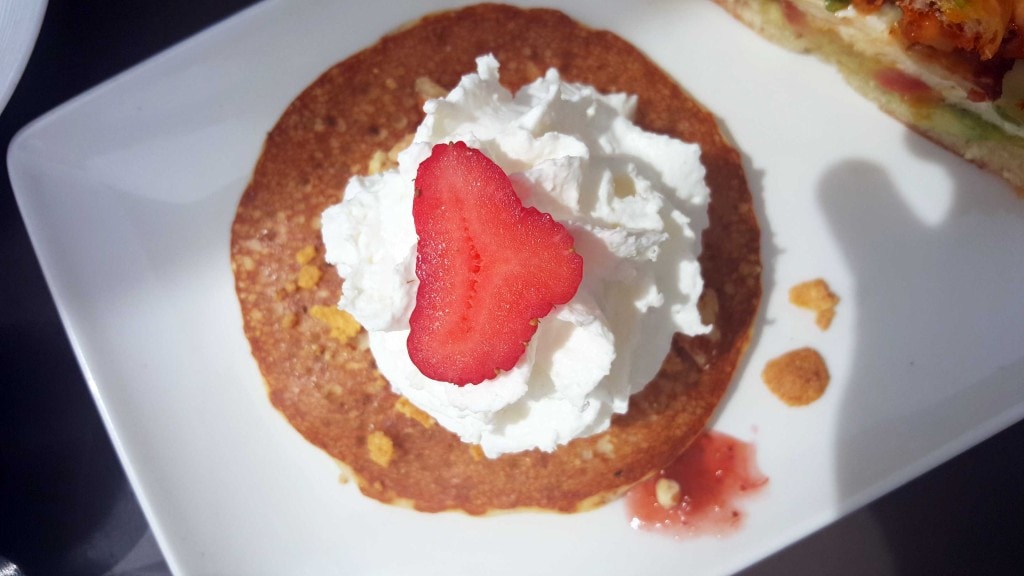 For our main course, we shared the Fried Egg Sandwich, which sounds kind of normal on the menu but in real life is HEAVENLY.  We added bacon because I use this baby as an excuse to add fat and calories to everything I eat, but the real star of the sandwich is the romesco sauce, which adds a nutty tomato-y flavor to the entire sandwich.  Holy SHIT was this good. 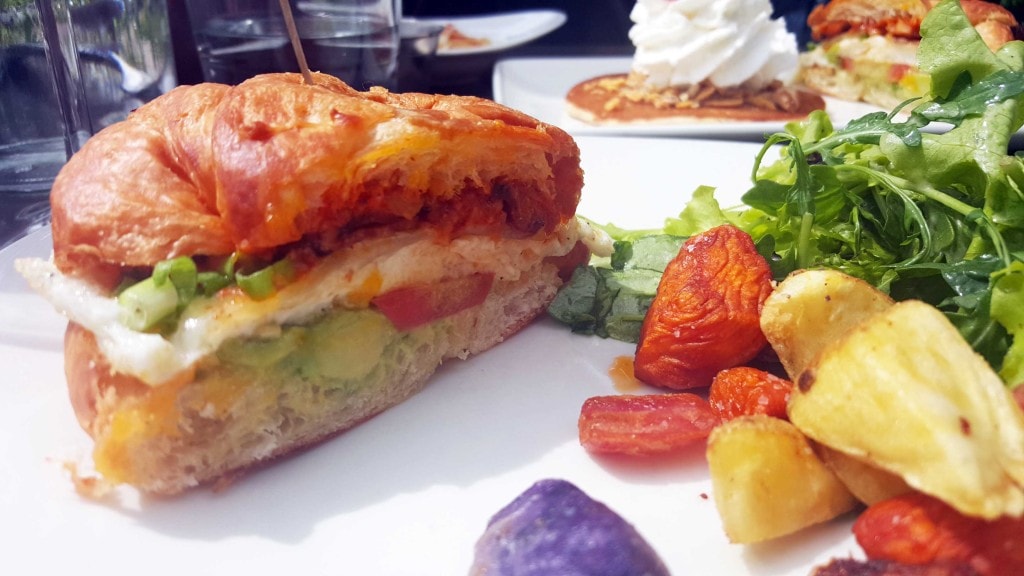 If I can say one negative thing about this restaurant, it was that it was advertised as having the best view in Denver.  The view wasn't bad, per se, but you look down a regular residential street at the Denver skyline and it's just kind of hidden and not mountainous and meh.  Best is a stretch, although maybe every single other Denver restaurant is hidden with no windows, I have no clue. 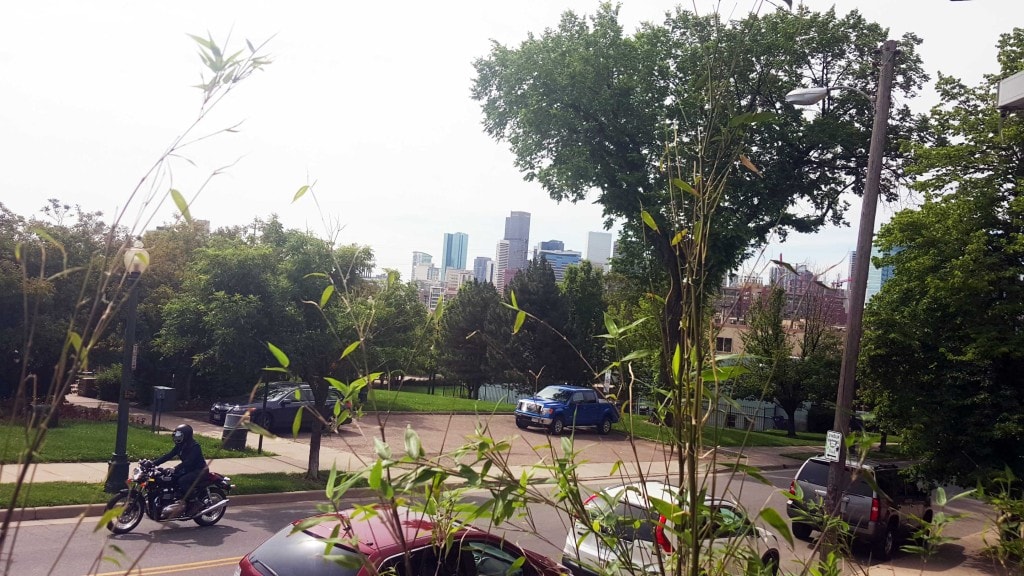 After brunch we headed towards Golden, CO to see ourselves some real mountains.  The drive out of the city is just gorgeous, and yet again we had epic weather.  Golden is a little town about 30 minutes away from Denver, so named for the mining that brought settlers to the area originally.  We walked through a public park, petted some puppies, watched some kayakers, stopped into a random little pub for a beer and some MORE green chili, and had an overall great time just wandering around.  We also bought the baby its first onesie, NOT weed-themed, which I considered a success on a few levels. 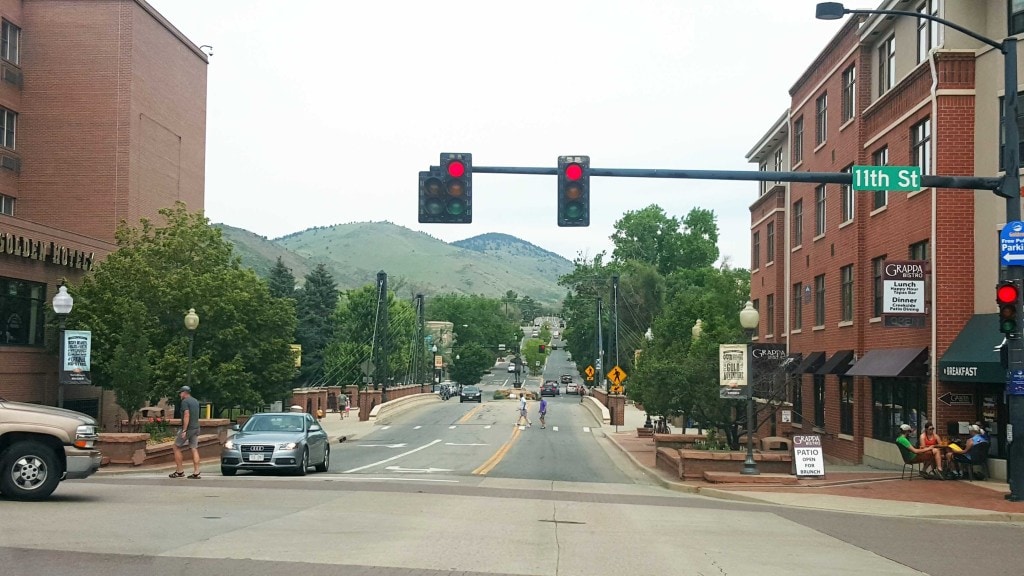 Also while in Golden we toured the Clear Creek History Park, which houses original pioneer cabins and is free to wander around in.  The park is teensy; you can walk through the entire thing in about 15 minutes.  As an avid Laura Ingalls Wilder enthusiast as a child, I felt like I belonged in Golden.   Minus the lack of a Target, but you win some and lose some, amirite? 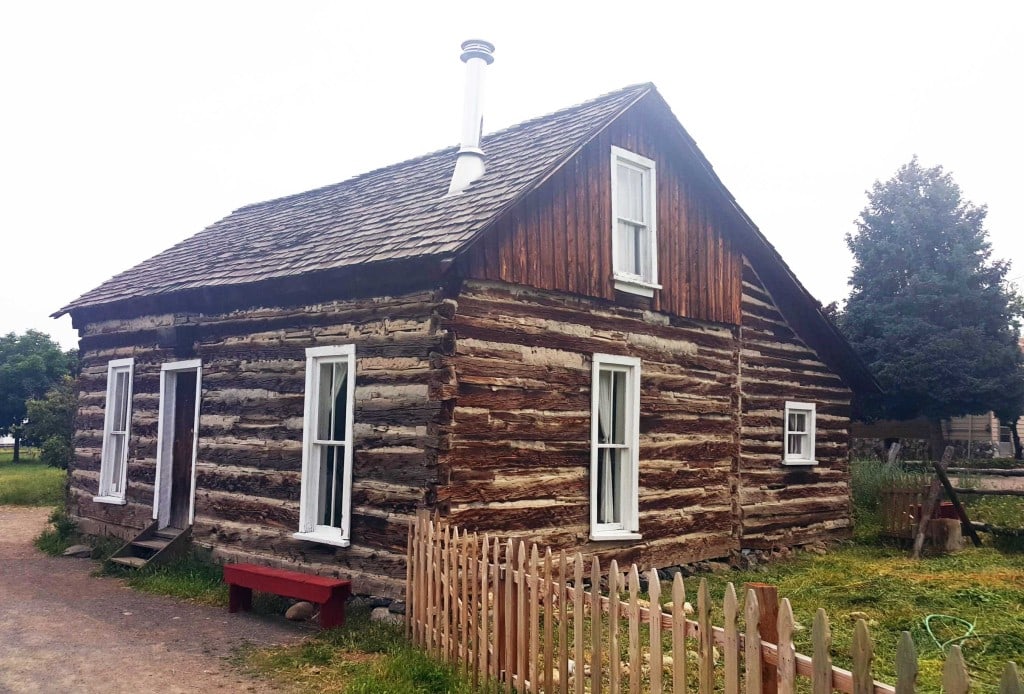 Of note, Golden is home of Coors brewery, which we WOULD have toured, but we drove around the buildings for about 20 minutes and couldn't find an entrance so we gave up.  No joke.  Maybe next time.  After Golden "we" still hadn't satisfied our lust for mountains, so we picked a random road and just drove.  Up and up and up, through some of the most gorgeous mountains I've ever seen.  We didn't have an end goal, just wanted to see more of the landscape, and it was SO much fun. 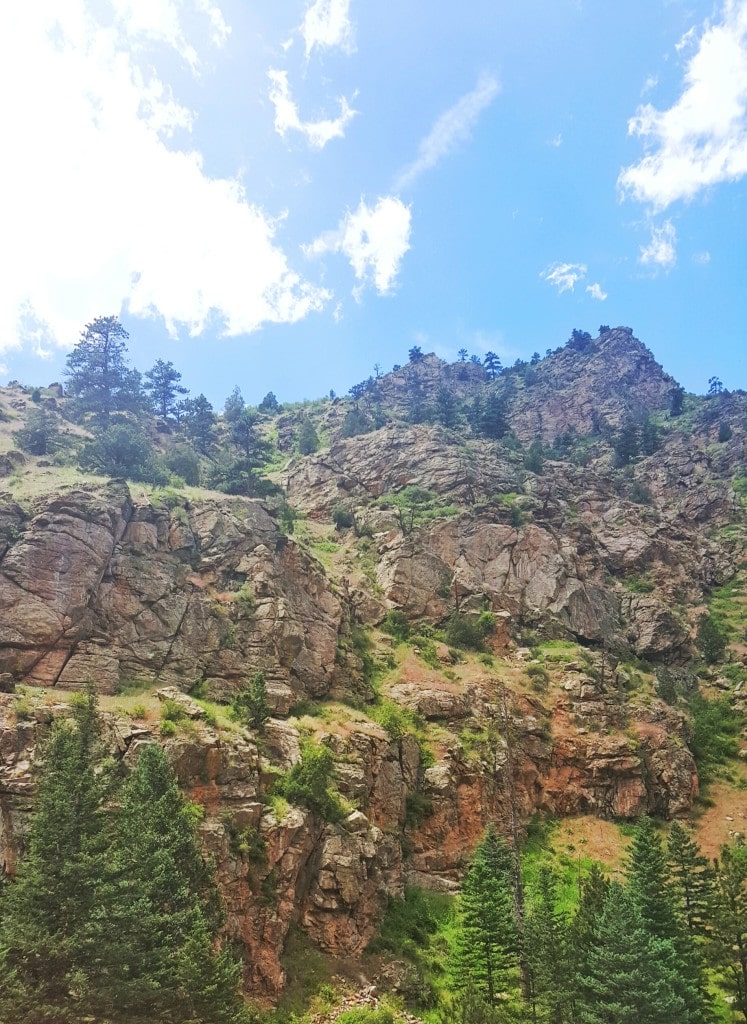 While we were driving we decided that our brunch and chili were CLEARLY not enough food so far for the day, and that we needed to try Rocky Mountain Oysters.  Do you know what this is?  They're fried bull calf testicles.  It's a Denver specialty, except you can't ever find them in the city, just in random little bars outside the city.  We landed at Willy's Wings in Morrison, another tiny town, home of Red Rocks, the famous(?) outdoor music venue slash place where you...see red rocks.  Ben Folds was playing that night so the traffic was horrendous, and we waited 25 minutes for what can only be described as chewy pieces of beef cooked exactly like everything at a standard fried seafood restaurant, and served with cocktail sauce.  So....not gross, kind of a strange texture, but we tried them, so THERE. 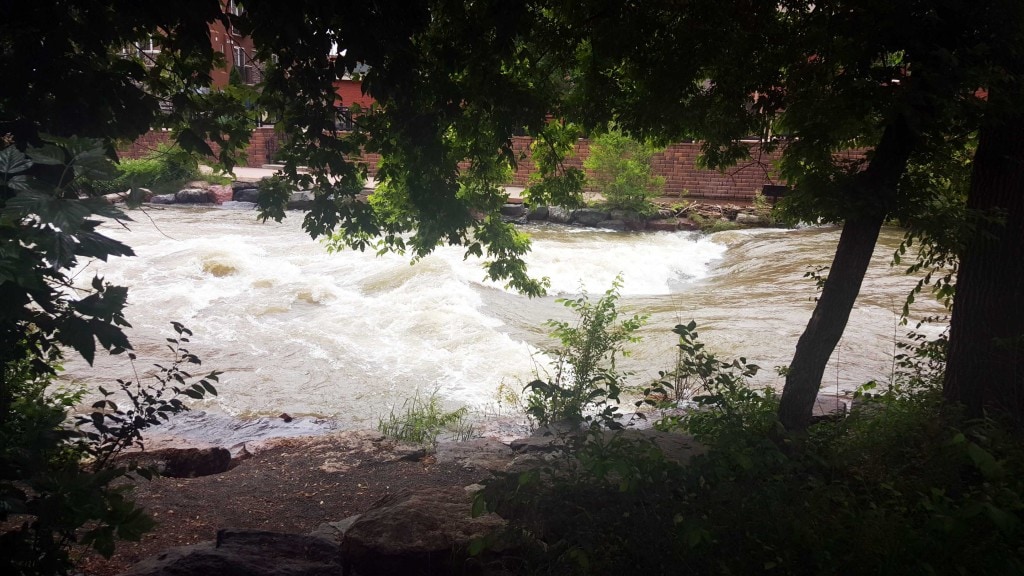 After alllllll of the testicle excitement we were super zonked and planned to go back to the hotel, BUT we realized that there was a Rockies game going on, so we headed back to the city, grabbed a parking spot downtown, and went to the game.  I'd never been to an MLB game, and it was so. much. fun.  Epic crowds, crazy sunshine, 100 degree temperatures, and just an overall fun energy.  We stayed for about 4 innings and then got our tired butts out of the sun. 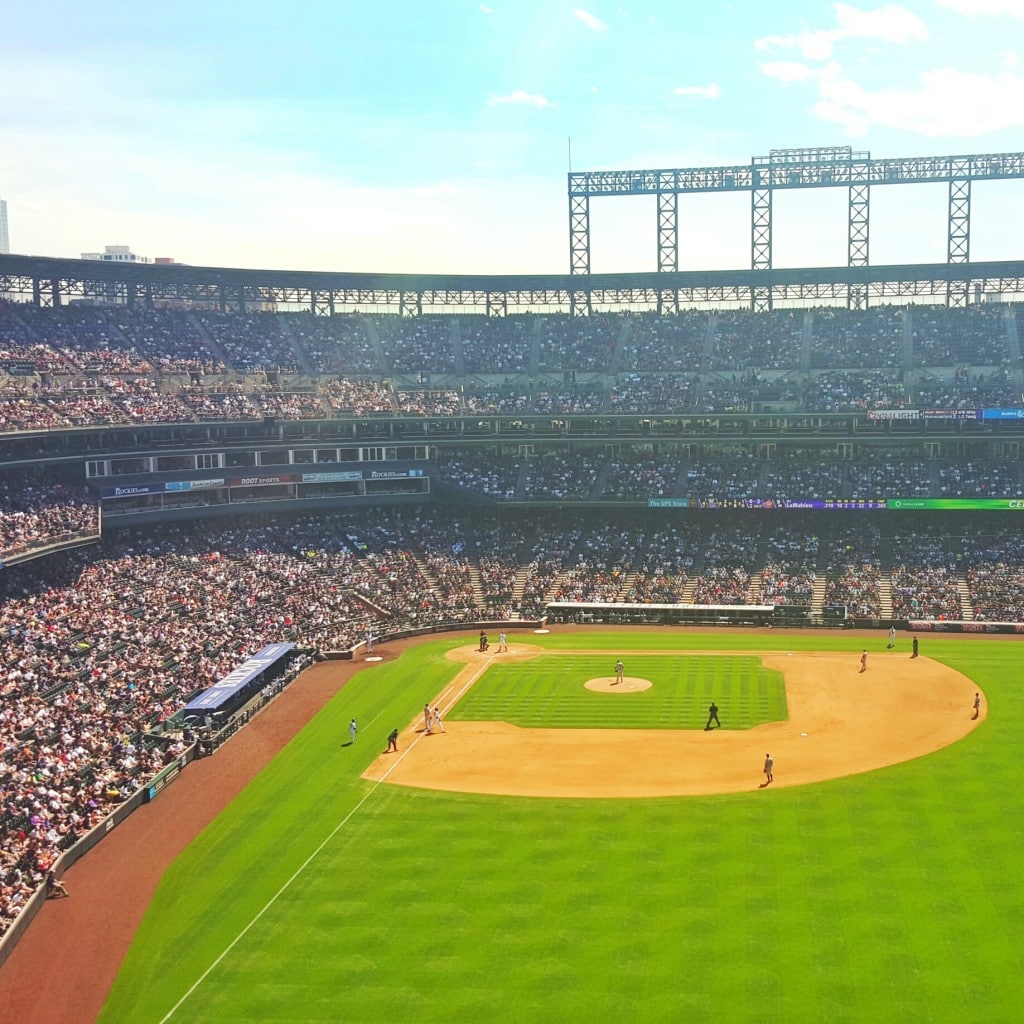 Sunday evening we kept things low key with 4 hours of golf (heyyyy playoff), Mexican(another burrito, more green chili, epically delicious) and frozen yogurt near the hotel, and an early bedtime.  If I had to choose, I think Sunday MIGHT have been my favorite day - restaurants are all well and good, but we really felt like we were experiencing more of Colorado, and loved every second of it.

Are we bored of this yet?  I promise I'm almost done, but we just had SO much fun.