I just realized I didn't tell you about Denver yet. 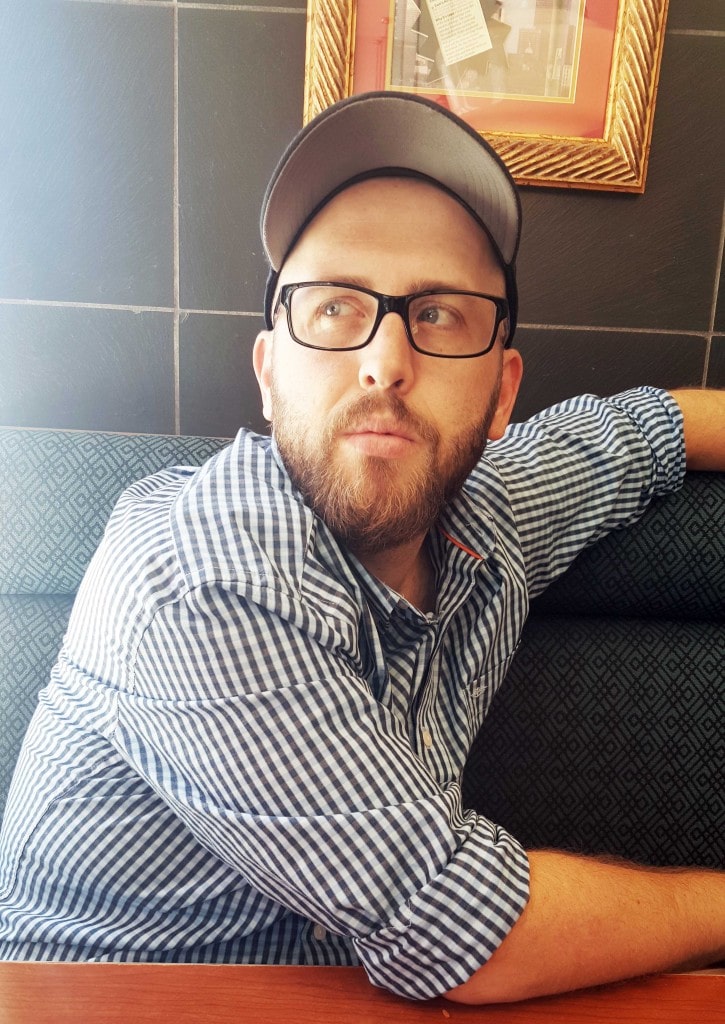 It was the best ever and we loved it and want to move but obviously it's really far away and we have no clue what we'd do there.

You know how it goes.

It's true, though!  We had a blast and even though Jay was there for work, I had a great time doing our fav city method:  eat, walk, google, instagram, repeat.  Seriously.  Might be the lamest ever, but it works for us and that's all that matters.

We arrived in Denver on Saturday morning, after a long way-too-early flight with Frank the Jesus Freak.  Other than that our flights were relatively on time - I got in about an hour before Jay, so I got our rental car and did some epic Googling to figure out a brunch plan, which was more like a lunch plan because of the time difference.  So...a food plan.  For our first meal in Denver we settled on Sam's No. 3 downtown Denver, which was everything we wanted it to be and more. 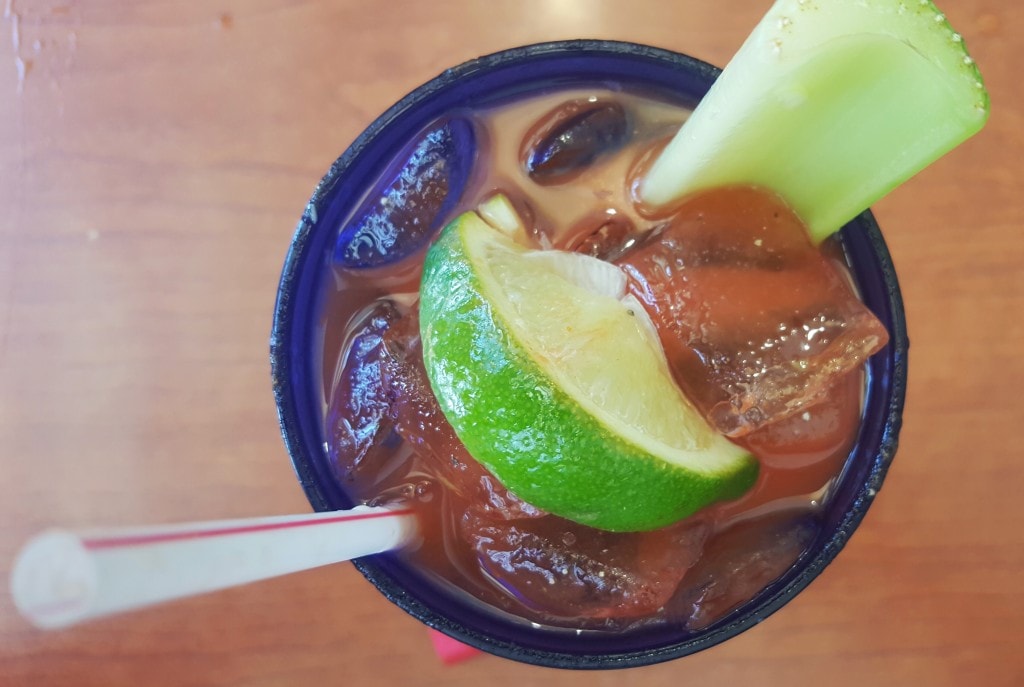 This place showed up on tons of lists:  tv-featured restaurants (we're huge Diners, Drive-Ins, & Dives fans), cheap restaurants, must-try Denver staples, etc.  The wait was about 45 minutes and WELL worth it.  Sam's is a diner with the most massive menu ever and TONS of Southwestern-style foods. 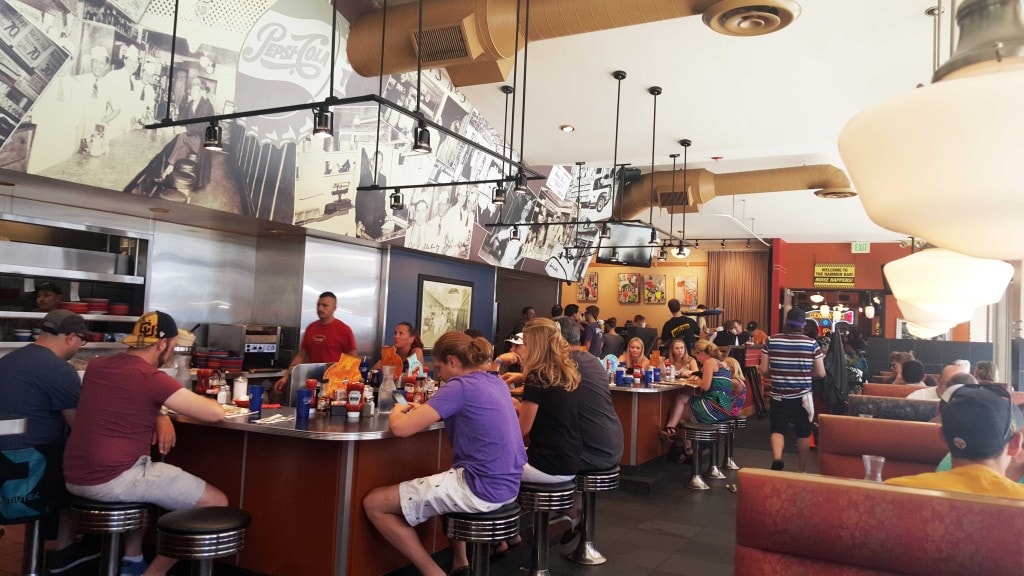 It was at Sam's that we got our introduction to Green Chili, which isn't in fact green at all.  Green Chili is a thin tomato-based chili made with green chilles and pork and it's used as a soup/chili OR as a topping for just about everything, burgers and burritos included.  At Sam's we got an effing mac and cheese dip with green chili, AND a combo platter with a burrito that was smothered in the stuff.  Both were epic, and sharing an appetizer and entree was MORE than enough food.  As advertised, the portions at this joint were not to be messed with.  The food was glorious and spicy, the prices were super reasonable, and our server was great.  We couldn't have been happier - what IS it about a huge meal right after a tiring morning of traveling, anyway? 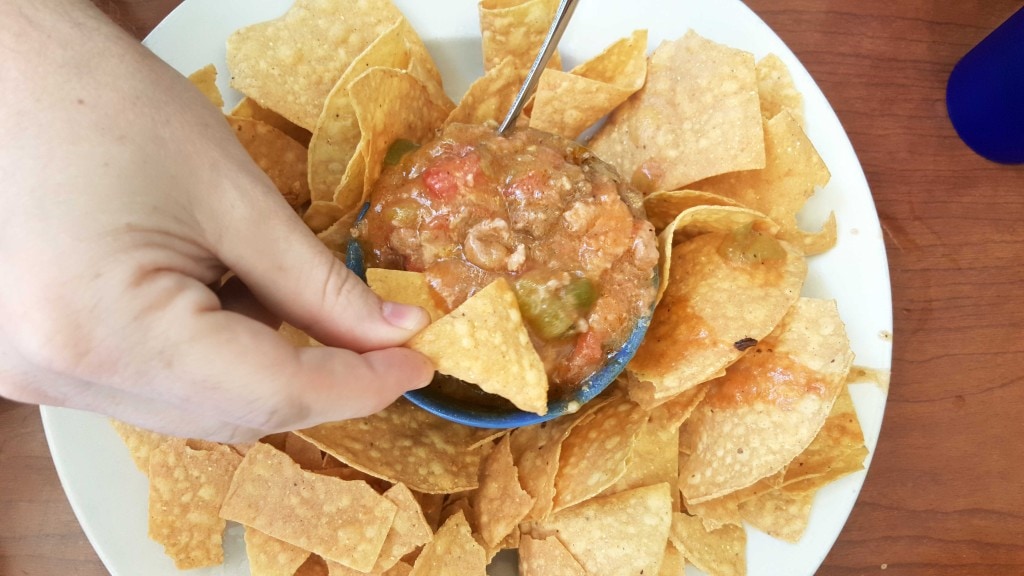 After lunch we wandered around the city for a little while figuring out our next move.  Denver is home to a ton of breweries, so we walked way downtown to Great Divide Brewing Co, which was a blast.  We didn't take the tour because in our opinions brewing tours are all the same, but we had some beer (Jay had a grown up one, I had a sample size, calm down) and loved the atmosphere - it was a really lighthearted crowd, boisterous, food trucks outside, inexpensive beer options, all the Saturday-afternoon fun our little hearts could take.  Also.  You know how some breweries will just let you taste little bits of beers while you decide what you want?  Well I guess that can get taken advantage of pretty easily at places like this, so Great Divide charges $1/sample BUT donates the proceeds to local charities.  Hell yeah. 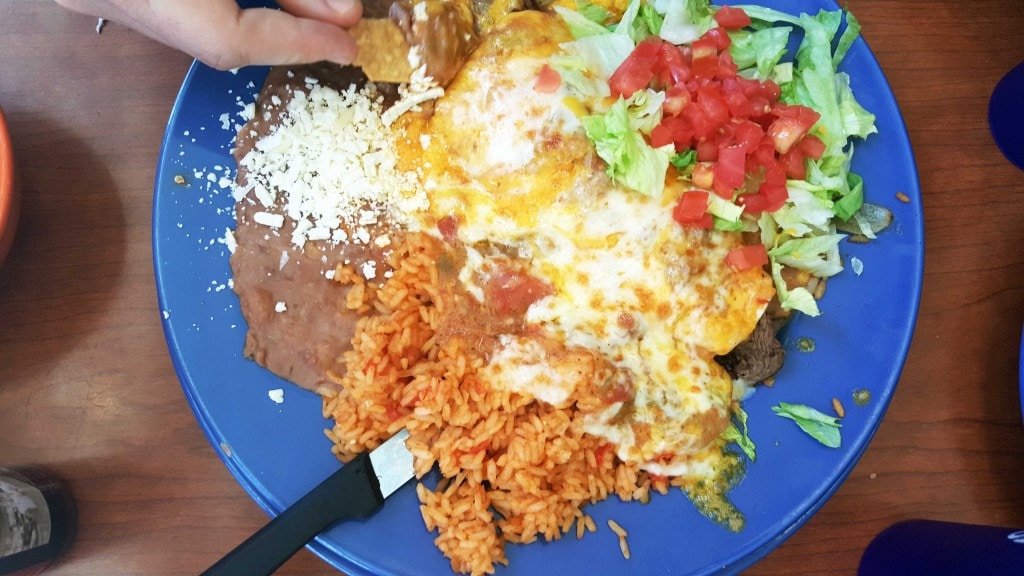 After Great Divide we went to check in to the hotel, which wasn't downtown so we had a teensy drive.  We were at the Hyatt Regency Denver Tech Center, and it was a lovely facility with FREE PARKING, which is always a plus in big-city hotels, doncha think?  The hotel was near the event Jay was in town for, not our choice.  Of note, every night the hotel had water infused with different fruits, which was hugely enticing to the sober pregnant lady who was INSANELY dehydrated from the altitude.  Every night it was like....what fruit will be TONIGHT?  Jay liked the cantaloupe the best, I liked the blackberry+strawberry offering.  Oh, and.  THIS was our view.  Whoa.

After a little rest in the hotel we started back with our internet restaurant search, and landed on TAG Burger Bar, where we ordered a burger topped with, for creativity, green chili.  This version WAS green, and was all chili compared to the Sam's version.  There was also goat cheese on the burger which was a super nice complement to the spicy chili.  See that there pickle?  Homemade, and we got an entire order of them as an appetizer.  They were AMAZING, and something that seems to be a trend at burger joints right now: homemade pickles.  Have you had some?  They were fresh and salty and sweet and tasted like summer should be tasting.  I'm making them soon, and I'll show you.  I. Can't. Wait.  With the burger we got Duck Fat and Tag Spice fries, which were ridiculous.  The fries were delicious and were spiced with what can only be described as a sweet and savory kind of seasoned salt blend.  I have no clue how they did it but we might have liked the fries and pickles more than the actual burger, which says something because it was a really great burger. 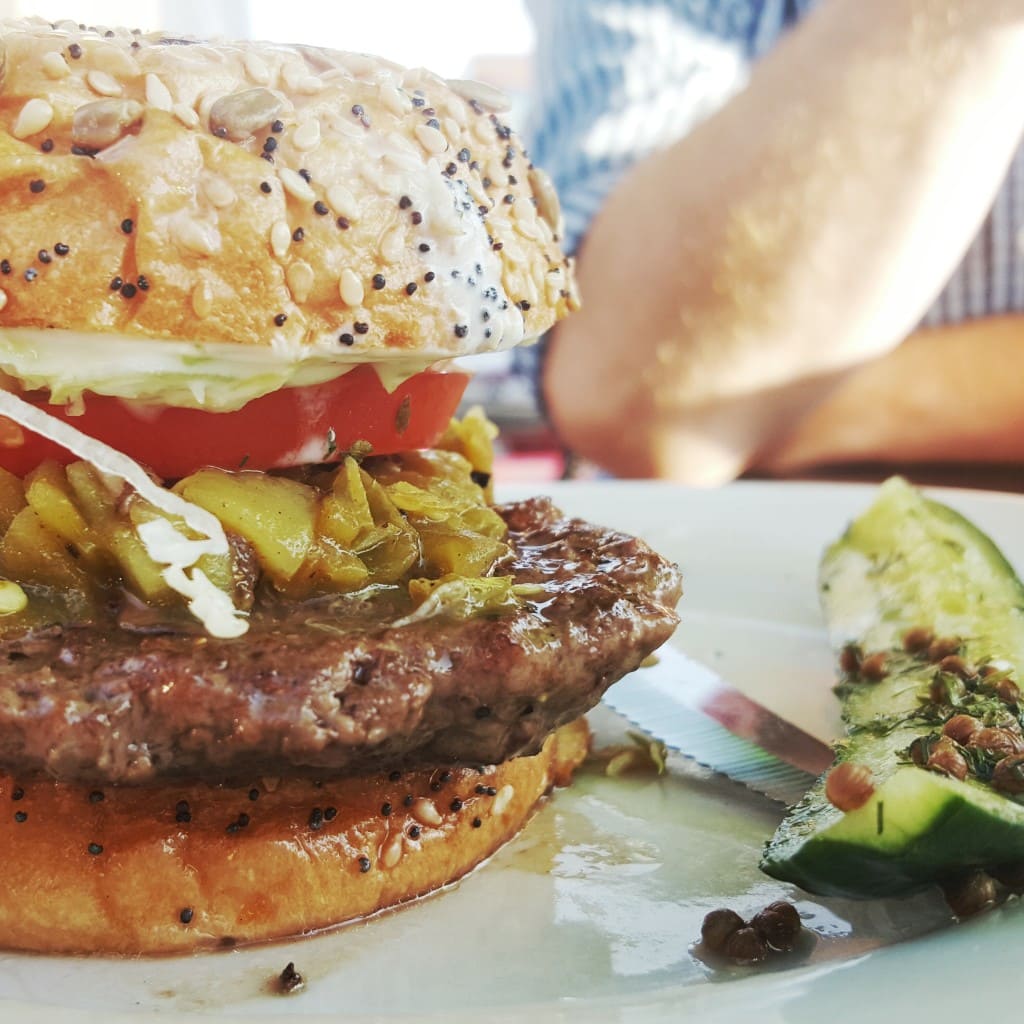 TAG is in a cute little neighborhood called Congress Park that has lovely trees, smaller single-family homes that look like they've been well-cared for but aren't new at all, happy kids playing in driveways, the works.  So, after dinner we walked around the area and got some ice cream, which was one of the more confusing experiences in Denver.  There was a mom with kids in front of us in line, and the employees were a bit annoyed that the kids couldn't make up their minds, which is HARD, right?, and then when they did the guy got the order all wrong, which was weird.  But the super strange part was that when I ordered 1 scoop in a waffle cone with sprinkles the guy said "you know the sprinkles will be IN the cone, right?"  And I assumed that meant that they mixed in their toppings, which was fine.  But, no.  The guy poured sprinkles in the waffle cone, topped it with a scoop of ice cream, and served it to me.  Is that a thing?  It was hard to eat and really took away the joy of sprinkles, not to mention the fact that it was just super baffling.  Jay had the same experience with his one topping.  BUT it was still nice to wander around the outskirts of Denver holding ice cream and talking and picking out our future house. 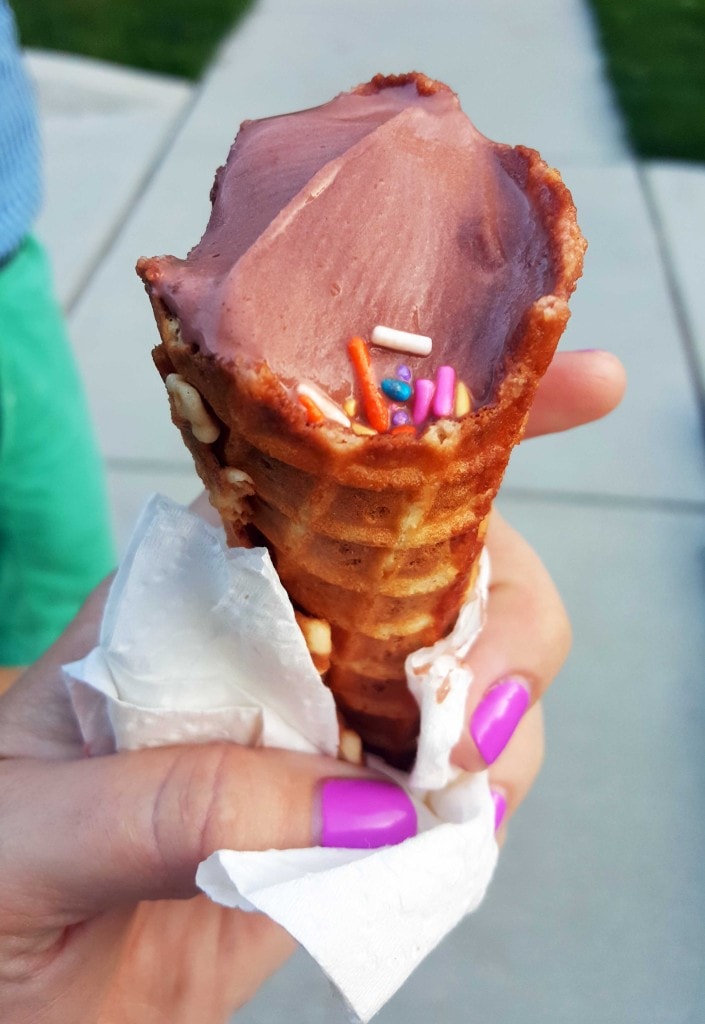 And that was day 1.  Food, drinks, sunshine (so much sunshine!), and everyone we talked to about the city was just LOVELY with tips and "enjoy your stay" and we loved that everyone seemed really proud of their city.

Sunday-Tuesday coming up next!  It's kind of....more food+sun+nature, which is the best way to spend a long weekend, we think.