It's a fall flatbread! 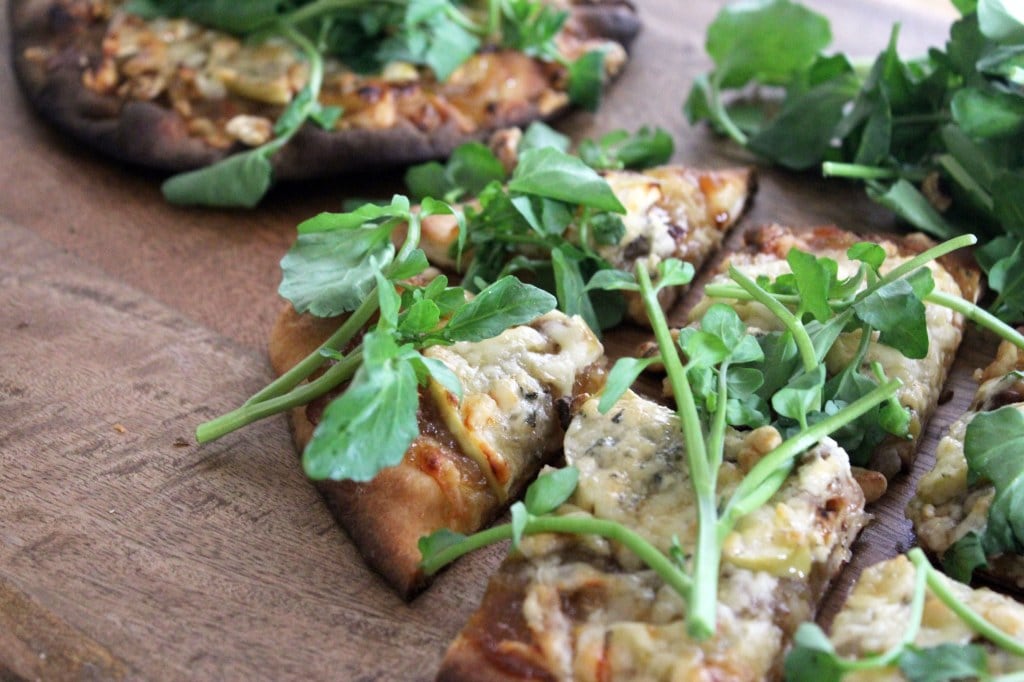 Because we're basic white people up in here and when it's fall we eat apples, ya know?

True story:  If you notice in these pictures, the edges of this gorgeous little meal are a little....dark.  Because.  I made this on a Saturday, which I try not to do because Jay is distracting and I wander around and forget things that are in the oven and have to start over and it just makes a lot more sense for me to photograph things when he's not around.  BUT we had had a few really nasty days in a row and this particular Saturday was nice and sunny and so I felt the need to take advantage of the lovely light.

And, instead of simply distracting me, Jay and I ended up having a very heated conversation that ended up with both of us in tears.  Literally while these guys were cooking.  It was GLORIOUS.  I mean, you really couldn't have planned it any better.  Casually chatting while cooking and BAM let's talk about all the really really important life stuff that we're figuring out and we have to FIGURE IT ALL OUT RIGHT THIS VERY INSTANT otherwise the world will end.

Instead of the world ending, the flatbread burned.  And we ate it anyway, and all was right with the world.

Burned edges aside, this is a very sexy flatbread.  I had something similar at a restaurant here called Roost, and really all I cared about recreating was a flatbread with apple butter as the sauce.  The other stuff just kind of fell on top of it.  You know what apple butter is, yes?  Kind of like spiced applesauce.  But in a jar where the jelly lives in stores.  It's really good, and even though it's available all the time it adds a very basic white person fall element to foods, which I appreciate in a spread.

In addition to the apple butter, you need some kind of flatbread - any kind you like!  This is actually naan from a package, but it's bread that is flat so....flatbread.  Then, we have onions, walnuts, an apple, blue cheese, sharp white cheddar, and watercress.  You could also use spinach or arugula - any kind of leafy green that you like! 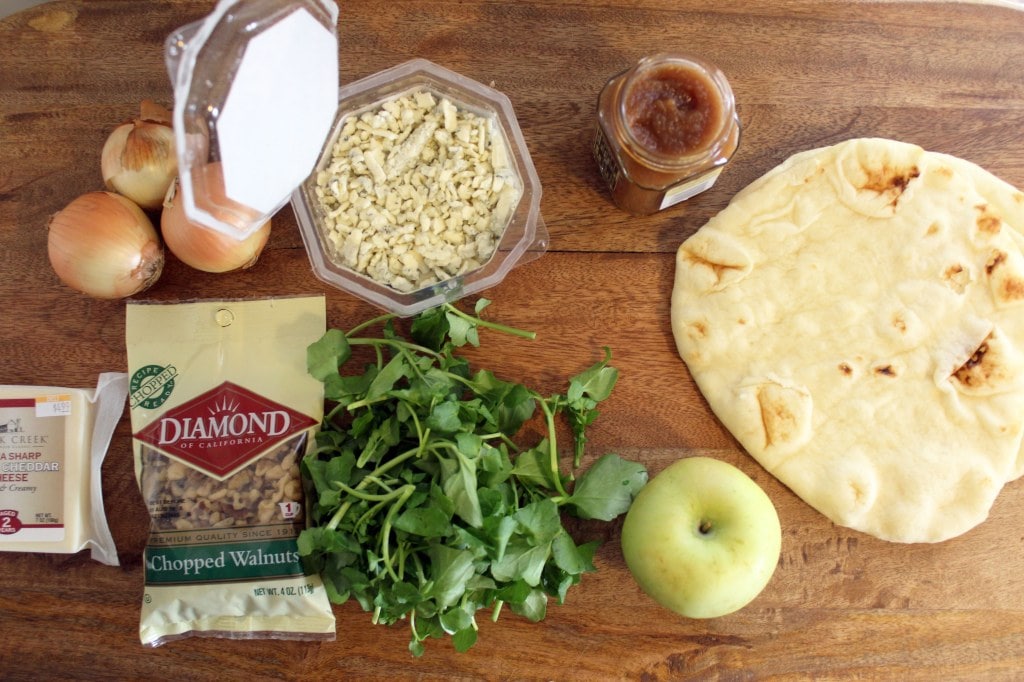 The only thing about this dish that requires any effort at all is caramelizing the onions.  It takes awhile, but really isn't hard - unless patience is hard for you, in which case it is very hard.  But, it's worth it.  Peel and thinly slice the onions! 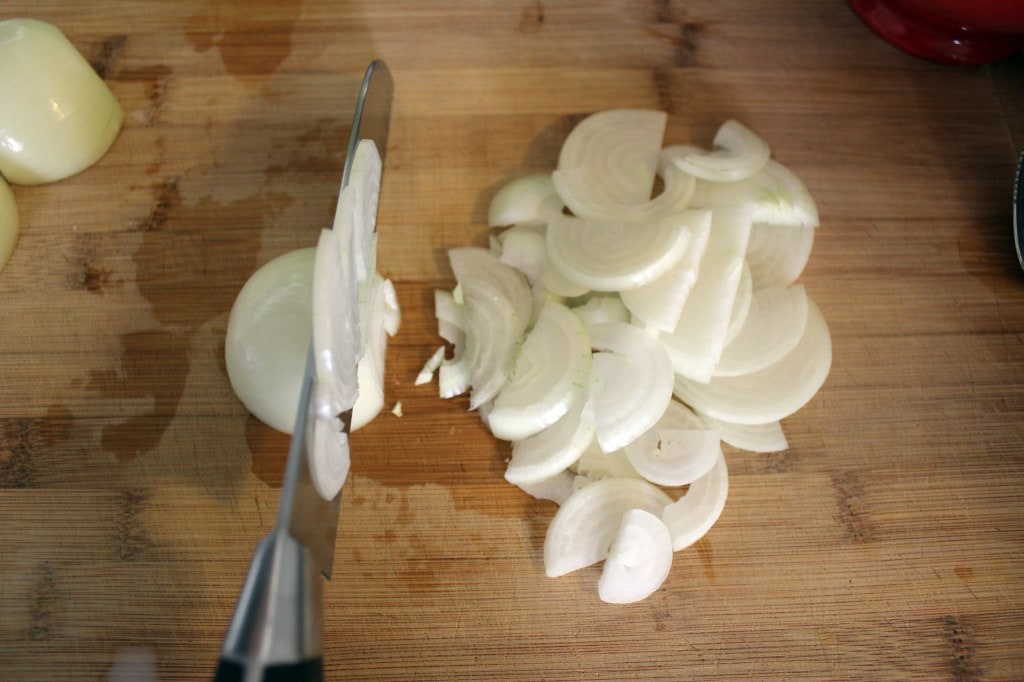 Add the onions to a small skillet over low heat with a drizzle of olive oil and a sprinkle of salt and crushed red pepper. 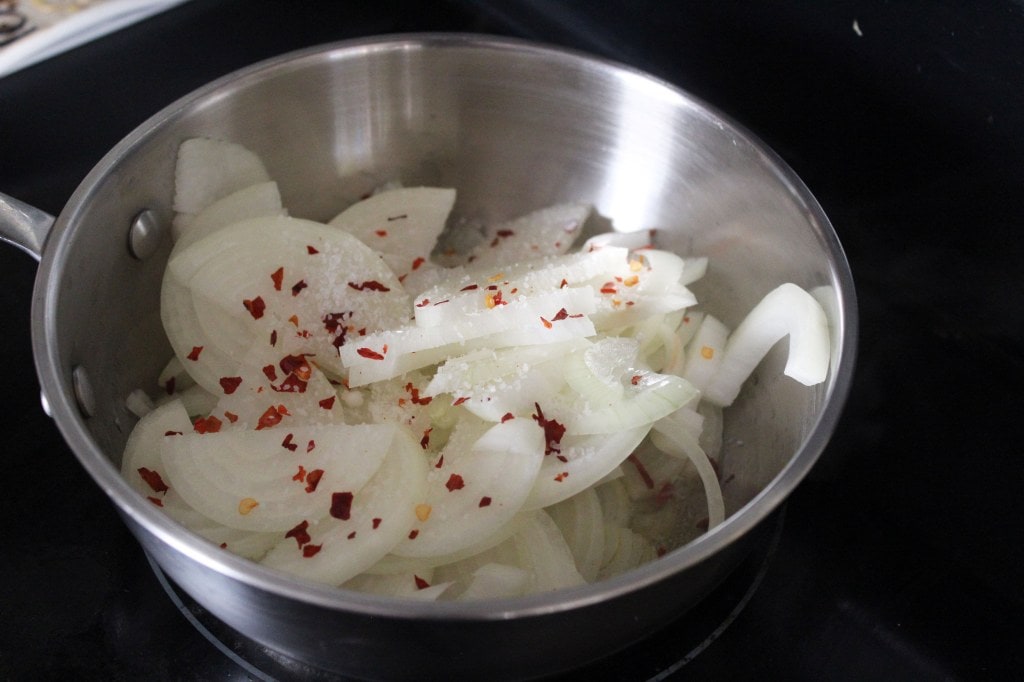 Then...you just kind of have to do other things for awhile.  Stir the onions every 5 minutes or so, but this will take 30-45 minutes.  The onions should never brown on the edges like a stir fry, instead they should very slowly soften and turn golden brown in color.  This is about halfway through. 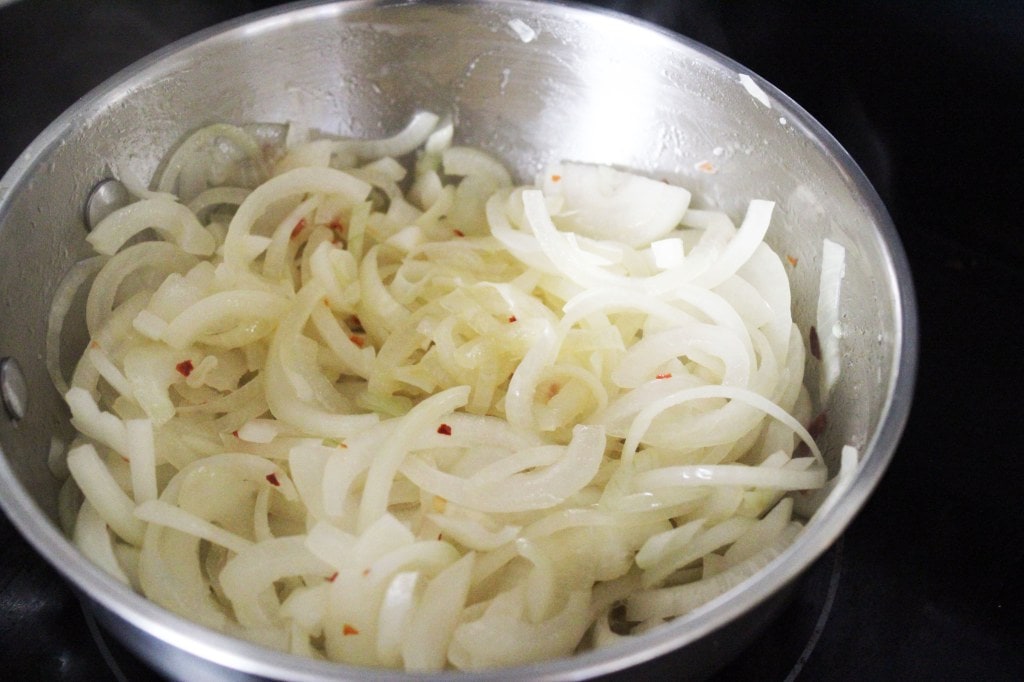 While the onions are working, grate the chedddar and get everything else ready to build the flatbreads.  Toast the walnuts in a small dry skillet for 5 minutes or so until they're fragrant and slightly golden. 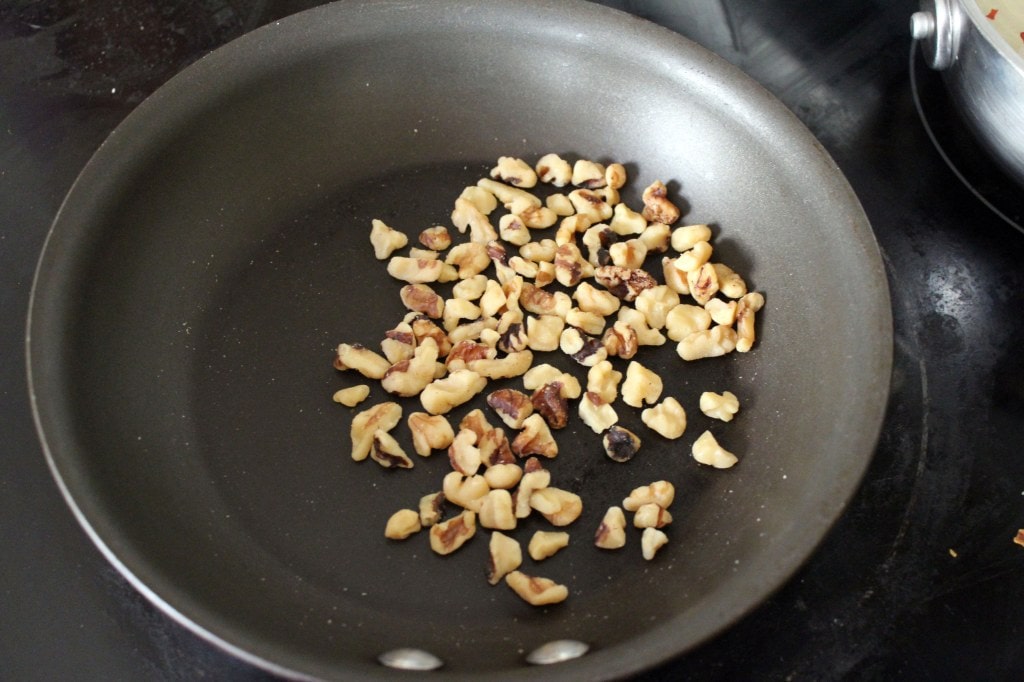 Then, thinly slice the apple.  Preheat the oven to 450F, too. 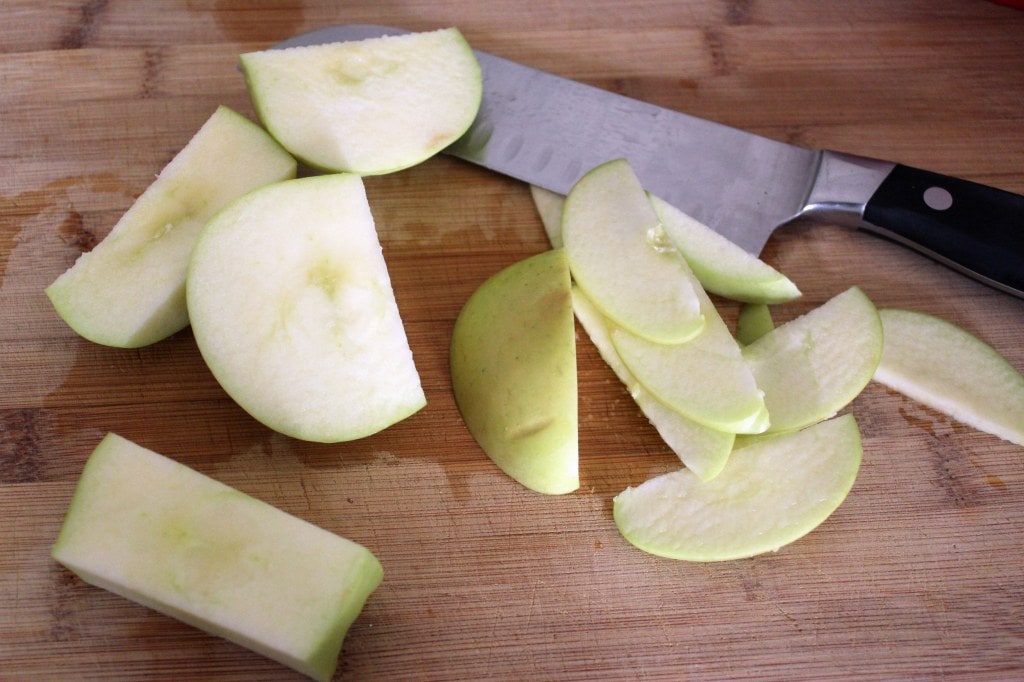 Then, it's just one layer at a time!  We start with the flatbread and smear that with apple butter.  Then, give it a nice layer of the caramelized onions, a sprinkle of walnuts, and a layer of apple slices.  Full disclosure:  I used about half the apple and ate the rest, but your flatbreads might be larger than mine were! 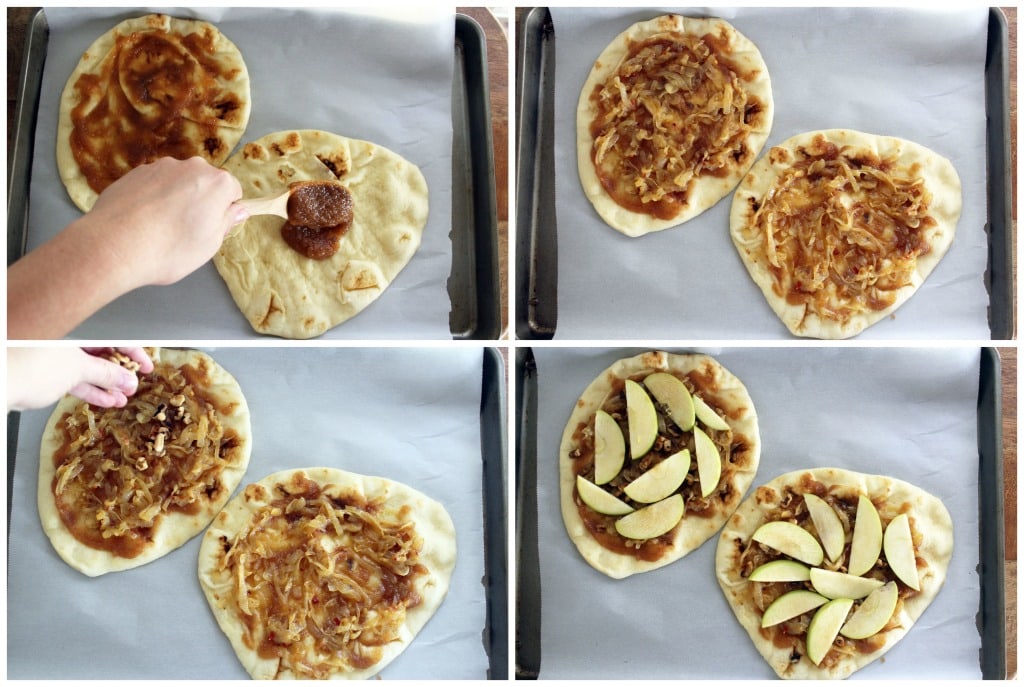 Then we have a sprinkle of cheddar cheese... 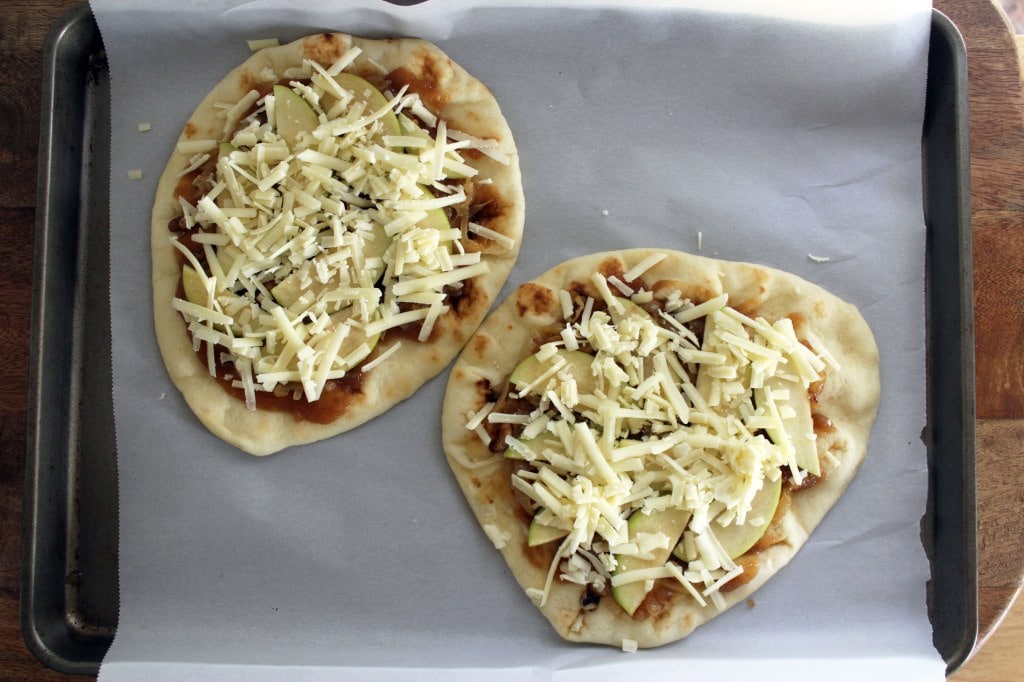 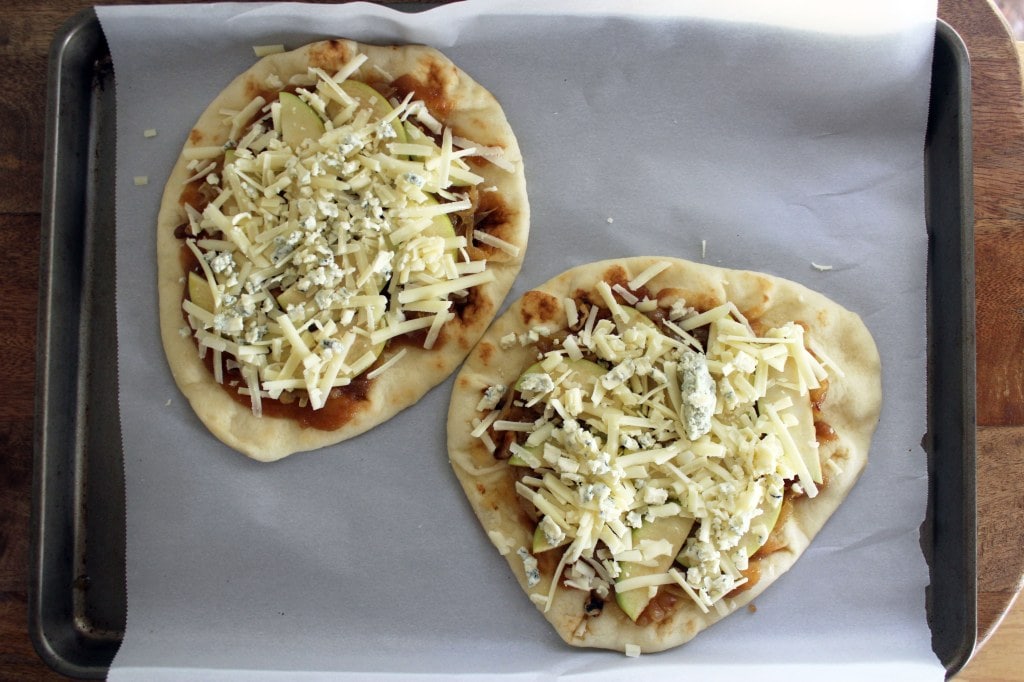 ...and we bake!  10-15 minutes until the cheese is bubbly, not for 25 minutes while you hash out your life with your spouse.   Less time than this. 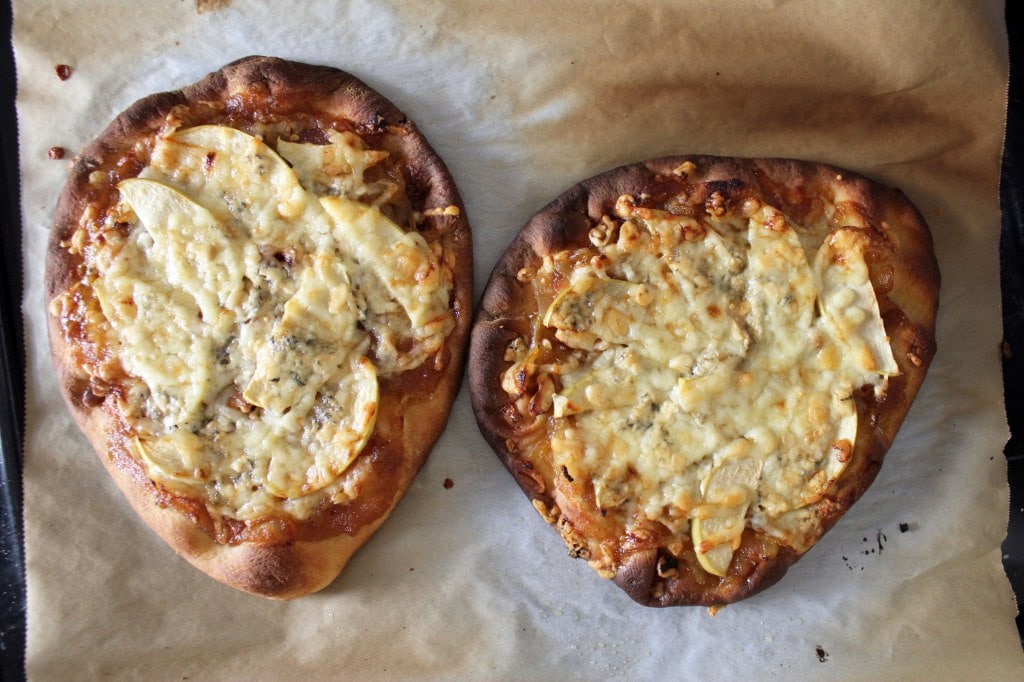 Cut the flatbreads into squares or wedges to serve, then top the whole thing with the watercress.  The greens add a great lightness to the dish, which is kind of heavy from the sweet apples and sharp cheese.  Heavy in a good way! 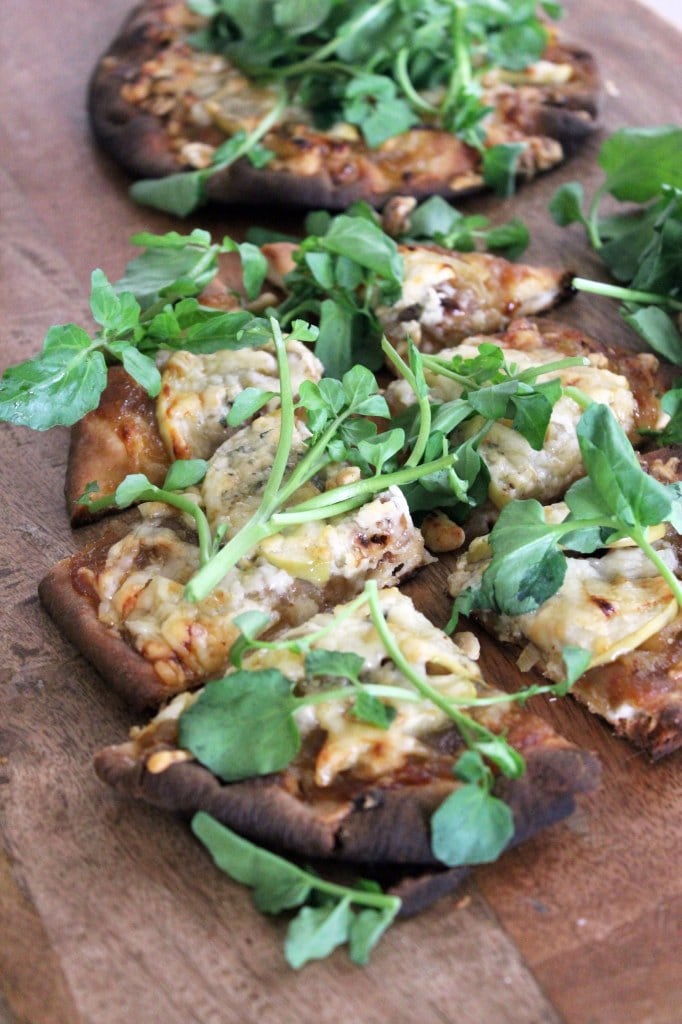 These are perfect for a meal, but also maybe for a thanksgiving appetizer? 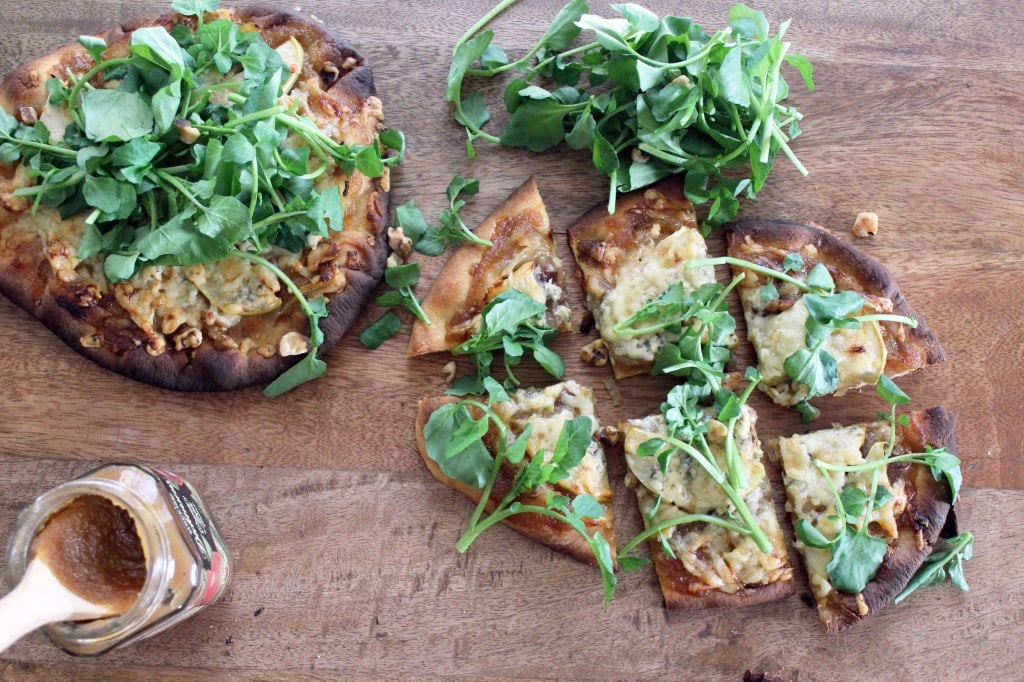