In case you were just DYING to know what we got everyone for wedding gifts.....here it is.

In honor of my 1-month anniversary of what is meant to be the hardest year of my life.

IT'S AWFUL GUYS.  Not really.  I mean, it's awful because we're still grownups and have to pay bills and stuff, but other than that we kind of like being married.

For our wedding, though, one of the most fun things was working out presents and favors for all of our loved ones.  In the planning process I drew a few blanks here and there, so, without further ado - this is what we ended up with.

On Friday night at our rehearsal dinner we did favors - a snack bar where folks could make a bag of food and drinks to have with them for the weekend.

It was my mom's idea, and a GREAT one - there weren't many food options at our venue, and people seemed to like the gesture!  Sam's Club + brown paper bags + a picture frame with a printed note = less than $200 spent and happy guests.

On Saturday, we did the most STANDARD favor ever, for us.  Remember when I made blackening seasoning for Christmas a few years ago?

Welp....we made a bunch more, ordered these cute pots and stickers from The Knot Shop, filled 'em up, and FAVORS!  Yay. Insider tip:  TheKNOT.com has GREAT sales all the time, so if you're planning a wedding wait on a good sale!

Groomsmen were super fun - they each got this massive engraved mug (Careful, they hold more than one beer.  A lot more) and craft beers that they each liked to share during the day while the boys got ready.

Bridesmaids/parents/sisters/little people all got different things - for those groups there wasn't just one gift that would suit all, so we did what we actually thought people would like!

My mom and some of my bridesmaids got engraved stemless champagne glasses, and I'm REALLY hoping that someone will get me my own for Christmas.  Seriously, I love them.  Maybe PB will figure out that I'm doing some free marketing for them (this is in no way a paid post) and send me some? It's Lindsay with an A.

The other bridesmaids got these - awesome vegan leather (vinyl, but that's a grody sounding word) clutches made by my bff Heather's sister Amy.  She's incredibly talented and will make you your very own in ANY color that you like!  I have one and love it so much, and it was nice to give something from a small vendor.  Thanks Amy!  Make me more things and I'll write about them on my blog slash also pay you for them. For people that I didn't know what to do, I did pictures in frames.  It just is what it is.  My sister and her girlfriend Katie were both bridesmaids, so I didn't want to get them the same gift.  So, I got them a clutch and a framed picture of the three of us to share!  My dad got a picture of the two of us and scotch because....everyone likes the gift of booze!  Here's that picture, just because I love him:

My favorite gift was the ones we did for Jay's parents.  I got the idea from my friend Kristen, who suggested that we do something relating to Jay's other two sisters who were already married.  SO, I got some frames with three openings, and put a picture of Jay's sister Catherine at her wedding in one.... 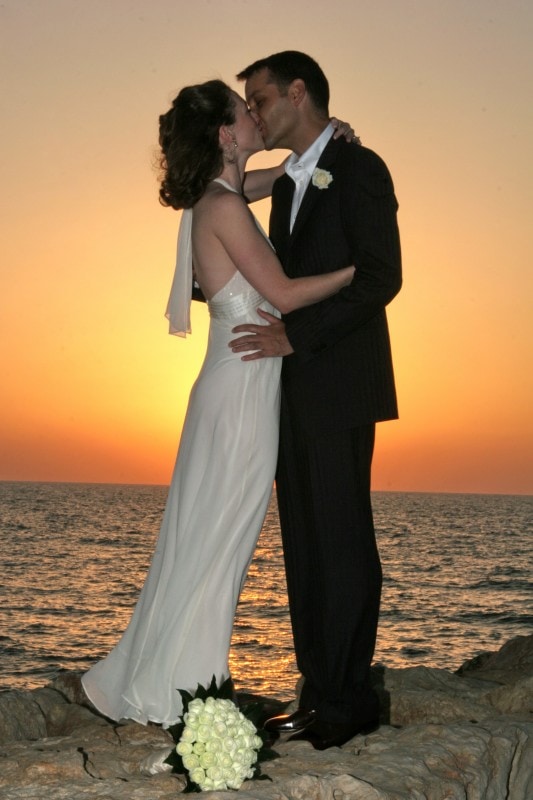 ...and a picture of his other sister Elizabeth in another...

...and left a blank space for us!  It was cool, I think, and everyone seemed to like it.

The last gifts we did were for our 5th groomsman who is 8 and Jay's sisters.  For little Jay (that's his name, legit), we got him Yankees gear.  Not weddingy, but he was the MOST excited about his gift, and told me at the rehearsal dinner for approximately 10 minutes about the collection of Yankee gear he already has on his wall at home.  It was a total win.

For Jay's sisters, I went with the monogramming theme again.  I got them each a stamp with their "couple monogram" last name initial in the middle with their initials on the outside, and blank stationary.  Then, I stamped the stationary to personalize it, and gave them the stamp too so that they could make their own after they used what we got them!  The stamps were less than $30 online and the gift was nice without being cheesy.

The point in telling you all this is that there are LOTS of weddingy gifts online that are 1. overdone, 2. overpriced, or 3. dumb.  If you decide to get gifts for lots of folks involved in your wedding, why not get them something they'll actually like?  Who cares if it doesn't match or involve an initial?  Some of ours did, some didn't - our goal was to spend our money on things people would actually LIKE, not things that were culturally normal as gifts.

Sorry I'm not sorry - I'm pretty proud of what we did.

Happy one month to my spouse!  It was a fun day.