With Kale.  And lemon. 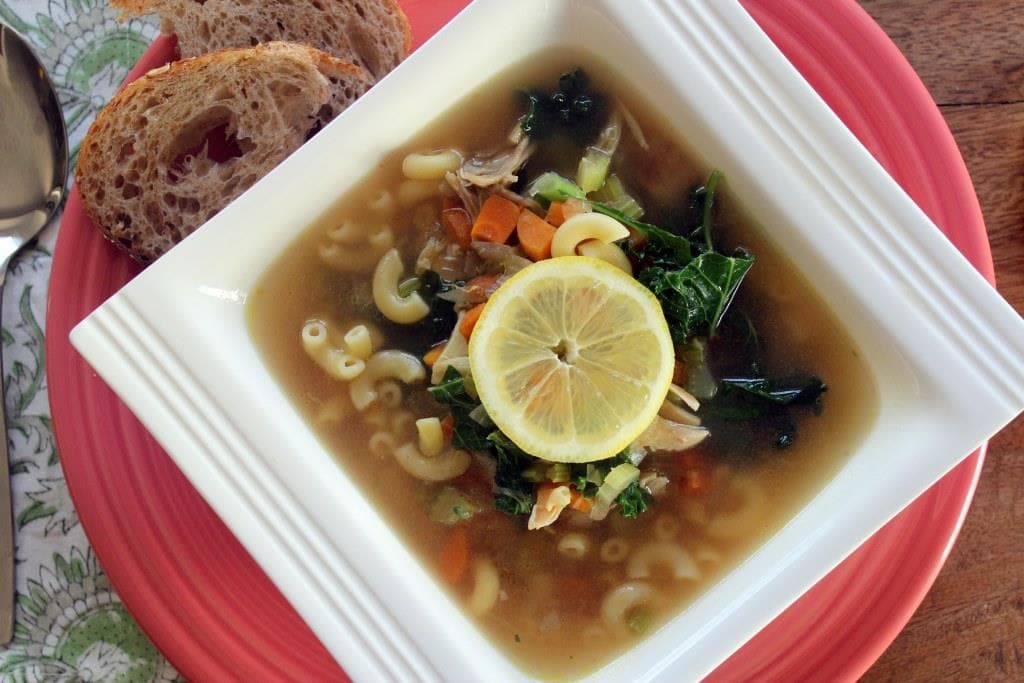 Recipe titles can just be a long list of ingredients, yes?

You might remember yesterday (if you follow along on Insta especially) that I did a bit of cooking.  And by bit I mean I photographed four recipes and cooked more than that so...yay.  Food!  I'm basically done cooking until Saturday.

For rizzle.  We're SUPER busy these days, so when we have a sunshiny day that I'm not running around the whole county I cook and photograph as much as I can so that 1. you have something to read while you pretend to work and 2. so that we have lunches and dinners that don't come from fast food establishments.

One of the things I made yesterday was this gorgeous chicken soup.  I make it all the time, but this is a super fast version with the inclusion of a rotisserie chicken.  We use the chicken to make our own stock to save money, too!  Then we add roasted garlic and lemon zest and ALL THE FLAVOR HAPPENS.

The making of one's own stock is what takes the longest here.  If you don't want to do that or don't have time, sub boxed chicken stock and you'll have soup in 30 minutes or so.  Let's make it!

You need a rotisserie chicken, some kind of short pasta (note the pictures later do NOT feature this shape of pasta.  I had a minor brain fart), carrots, celery, garlic, lemon, onion, and kale.  You can skip the kale if you want a super traditional chicken soup, and sometimes I use spinach, but I really do like the inclusion of SOME kind of dark leafy green.  Your choice, though! 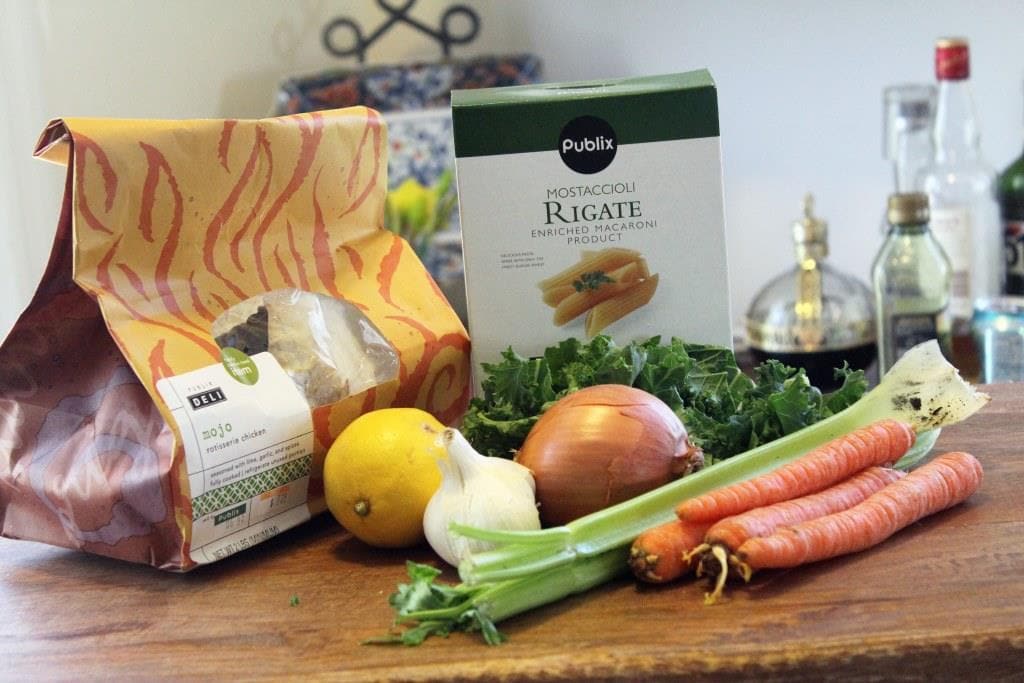 First, we'll do the time consuming parts of this operation, which are roasting the garlic and making the chicken stock.  Wrap the garlic in tin foil and roast it at 425F for 30-45 minutes until it's super soft and fragrant.  HINT - you can do this with a bunch of garlic all at once and just keep the heads individually wrapped in the tin foil you used to roast them in the fridge until you want something with roasted garlic.  Easy!

When the garlic is done, just leave it on the counter unwrapped-ish so it can cool enough for you to handle it. 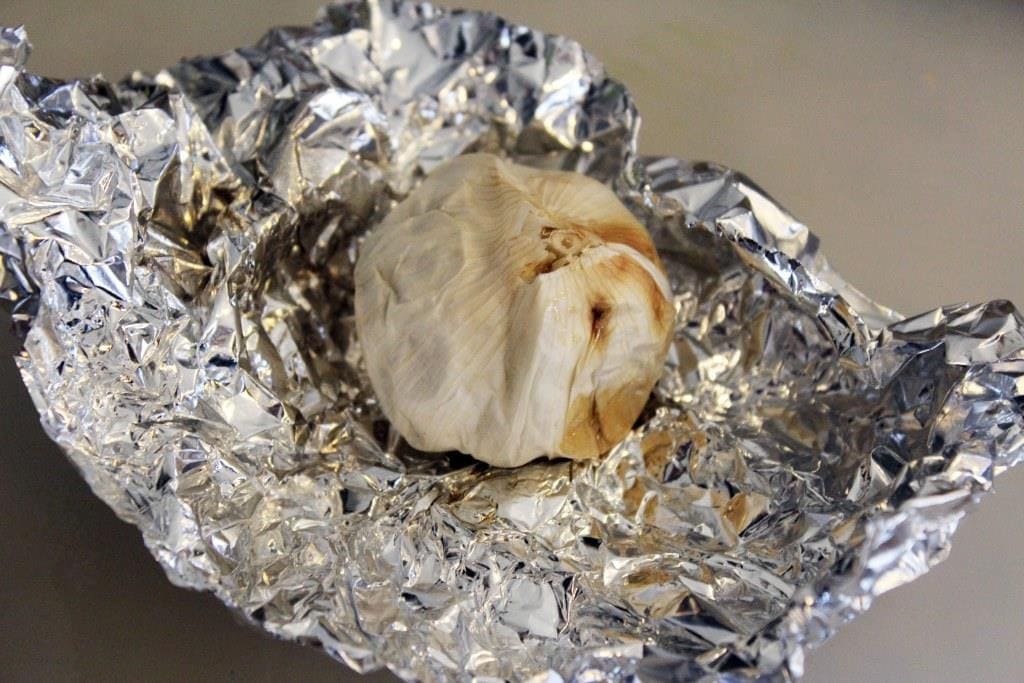 Then, use your fingers to separate the chicken into two piles:  one of skin, fat, and bones, and one of the meat. 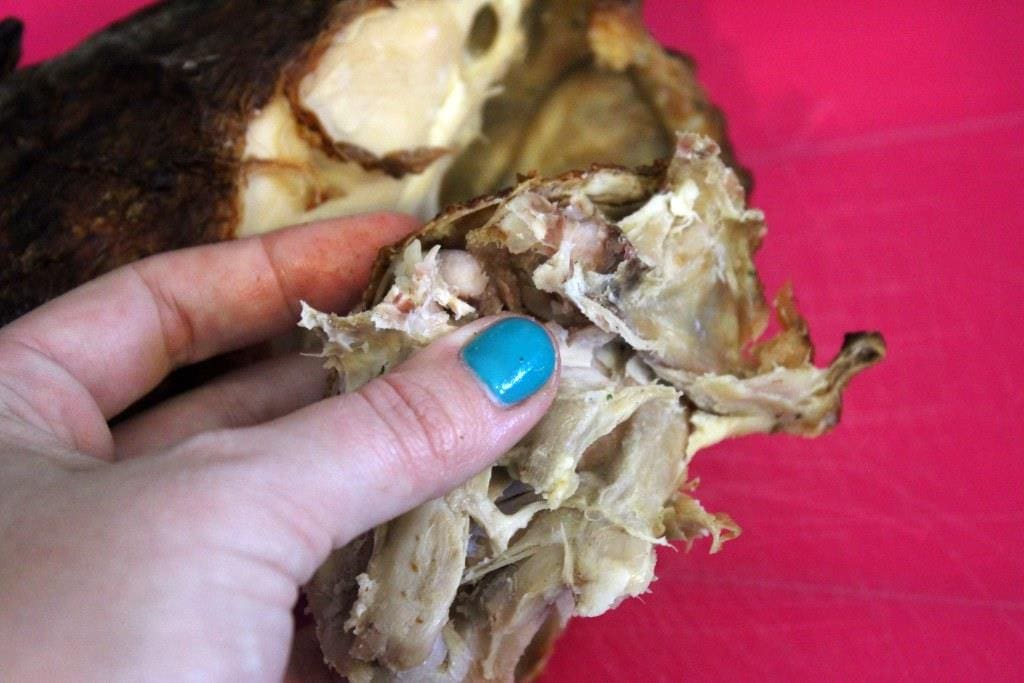 Place the non-meat pile in a large pot with water.  I added some onion bits and parsley stems because they were around - like I do when I make veggie stock, but you can TOTALLY make stock with just the chicken parts and water.  You'll want enough stock to fill the pot at least halfway later on.  Cover the pot, turn the heat to high to bring the mixture to a boil, then reduce it to medium to simmer for 30 - 45 minutes, depending on how long you have. 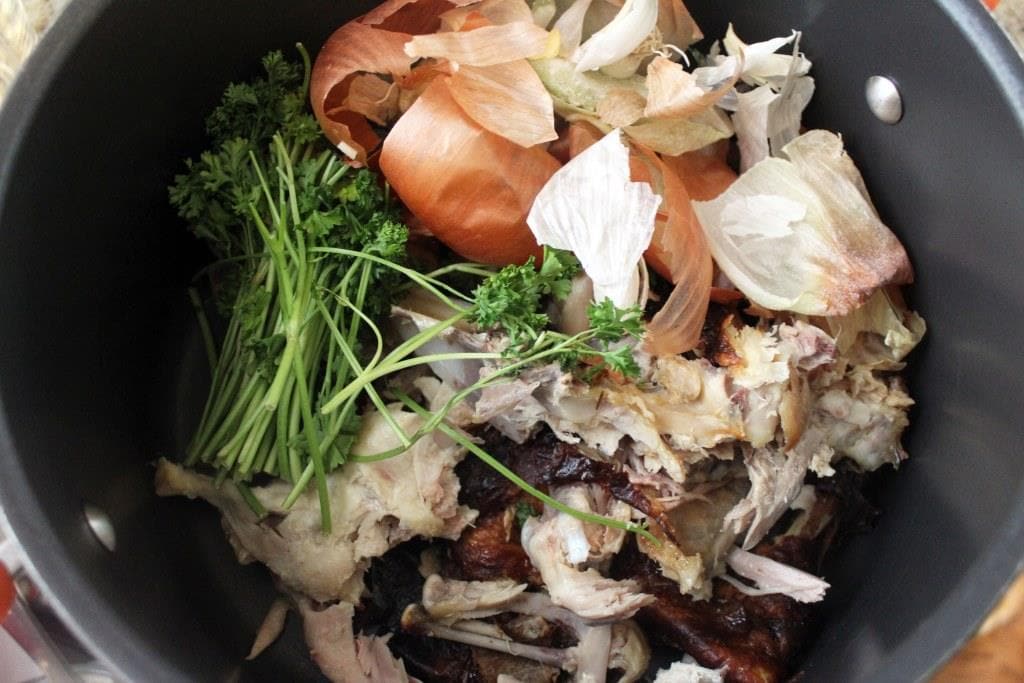 So then the garlic is roasting and the stock is ... making itself.  Or something.  Go take a shower.  I haven't done that yet today!  Or yesterday!  I'm officially the stinky kid.  When you're ready to make the soup, finely chop the carrots. 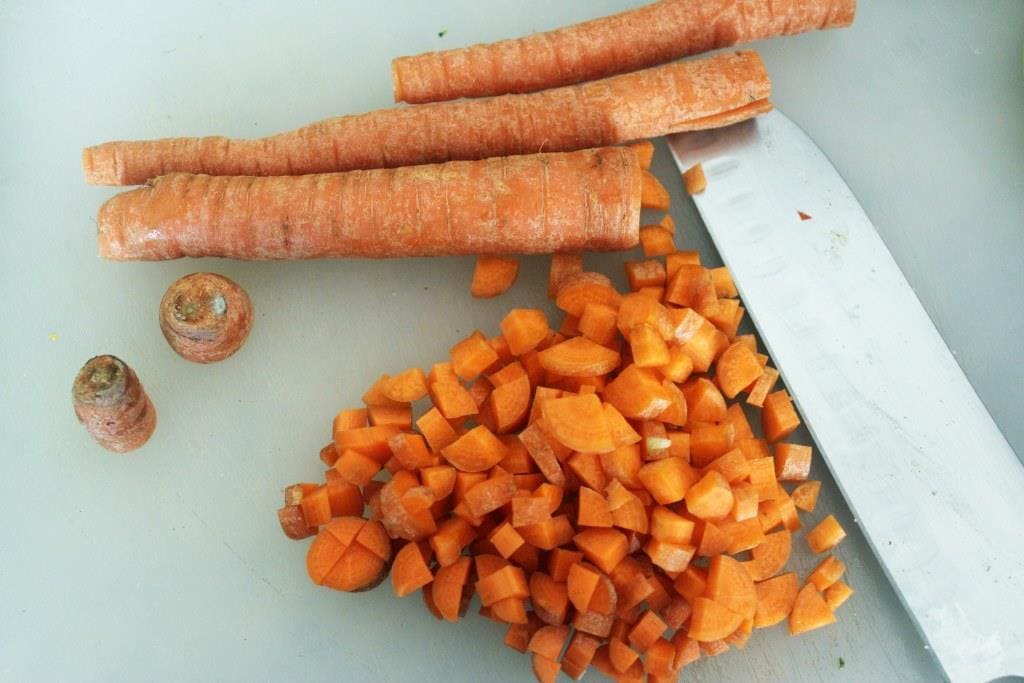 And the celery and onions!  Also can be done in advance. 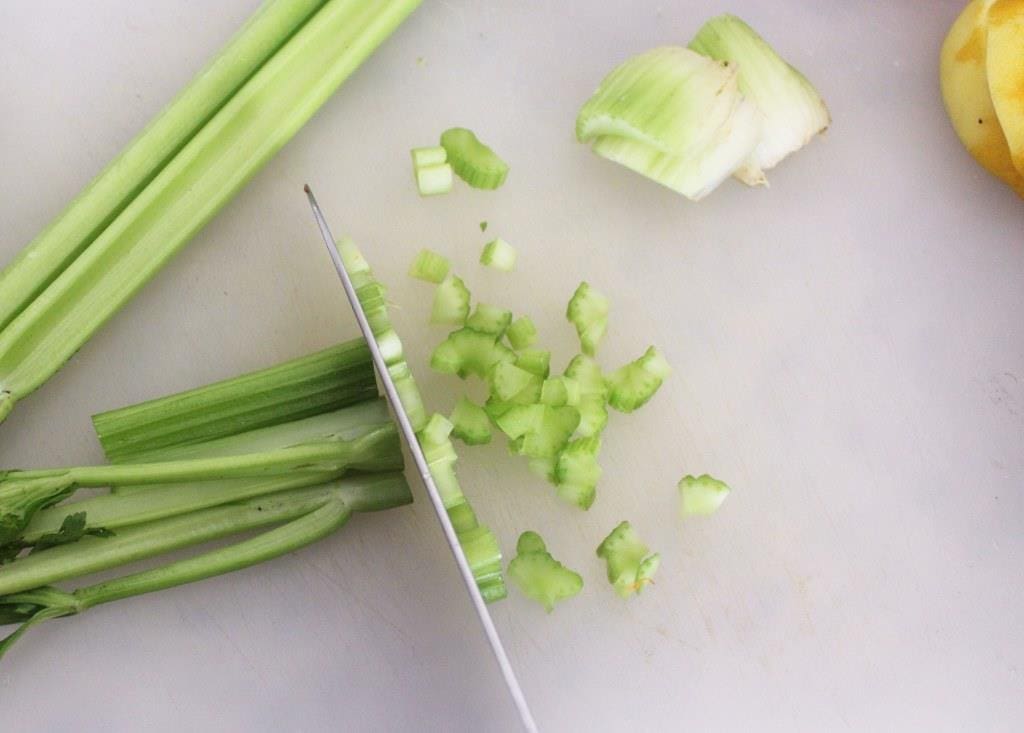 When the stock is done, set a strainer over a large bowl and strain the stock, then place the same pot back on the burner over medium heat.  Add the carrots, celery, and onions to the pot with a sprinkle of salt and a drizzle of olive oil. 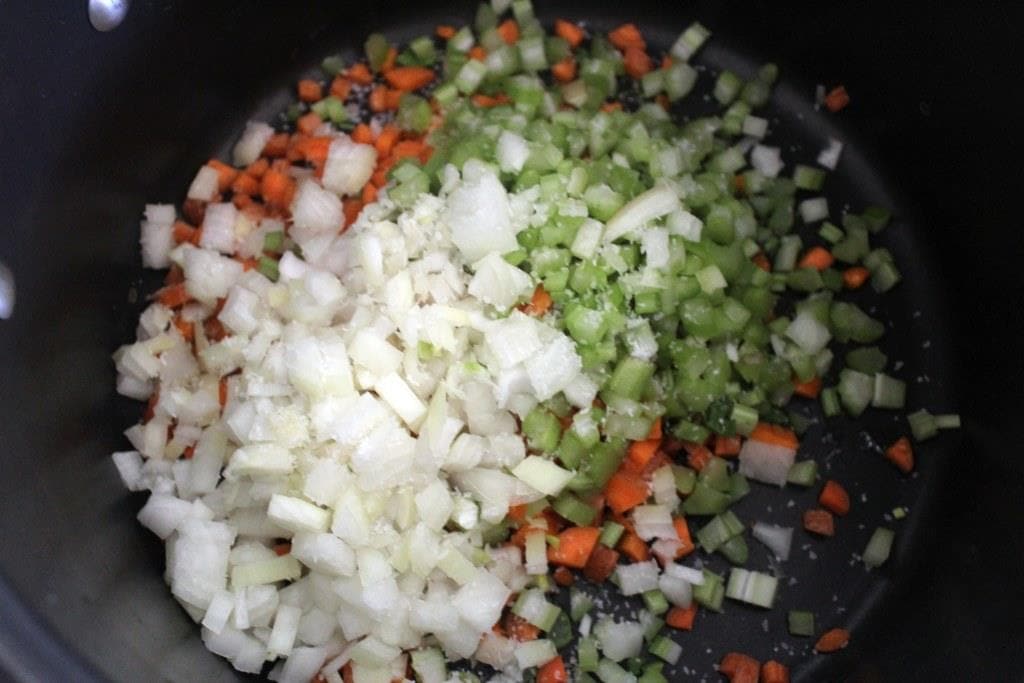 Stir the veggies for a few minutes until they start to soften, then zest the lemon directly over the pot. 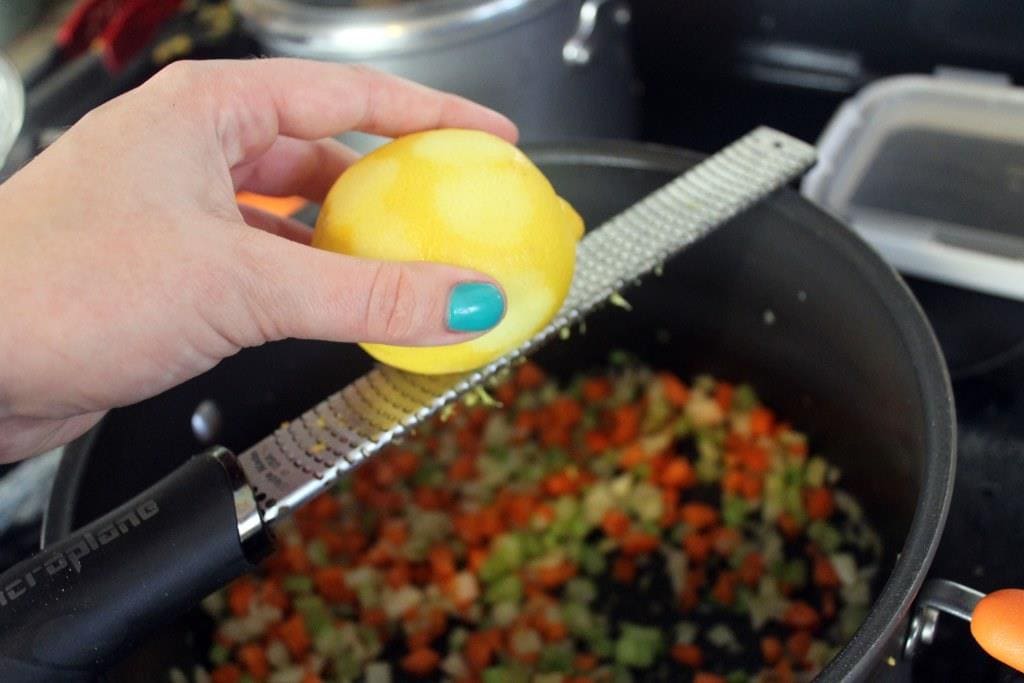 Pour in 6 cups of the chicken stock, and reserve any extra - if you don't use it now you can use it for other things later!  Now, cut the roasted garlic head in half and squish it directly into the soup so that it can dissolve as the soup simmers. 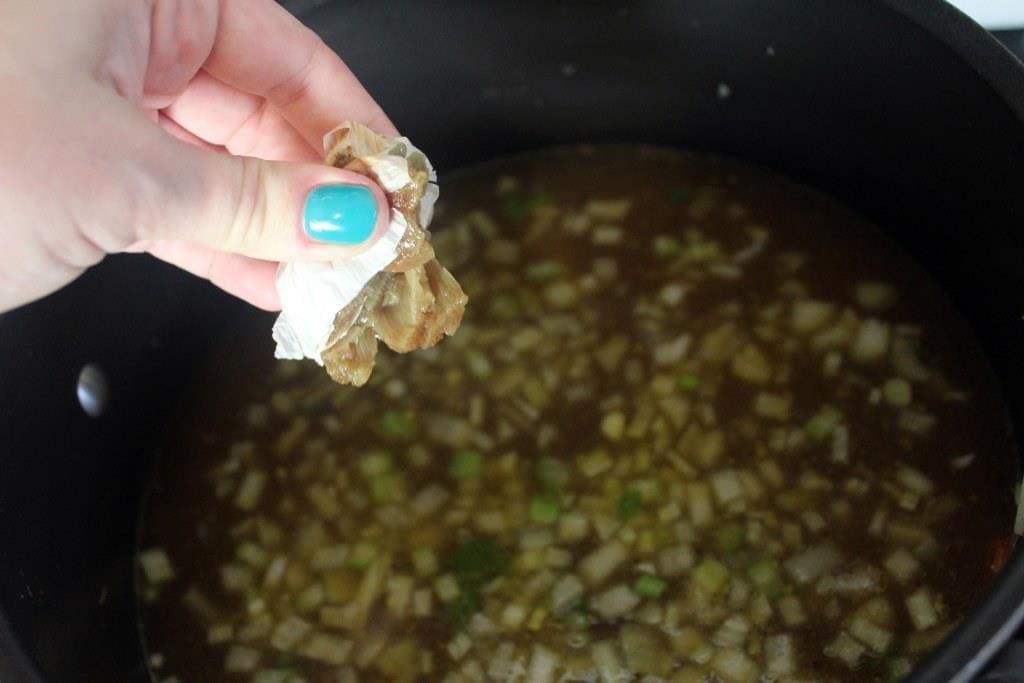 Cover the soup and let it simmer for 15 minutes or so.  This should be enough time to boil the pasta that you originally planned to use for something else! 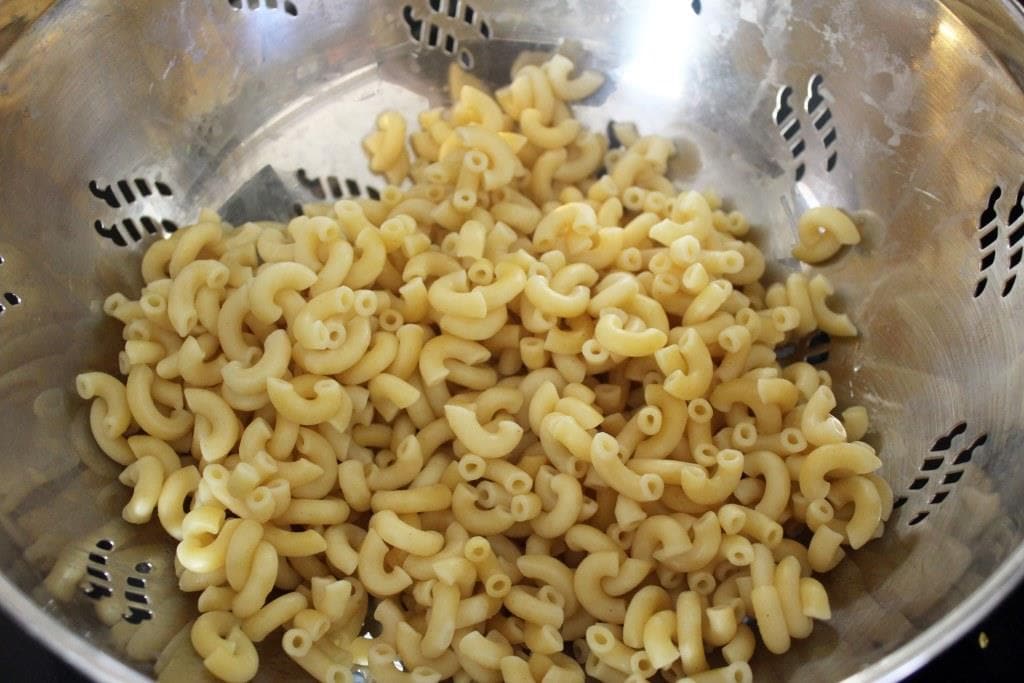 When the soup has simmered and the veggies are very tender, taste the broth and add salt and pepper if you'd like.  Then, add the kale and the chicken, torn into chunks, to the soup. If you'd like, add some more broth to the soup to increase the quantity. 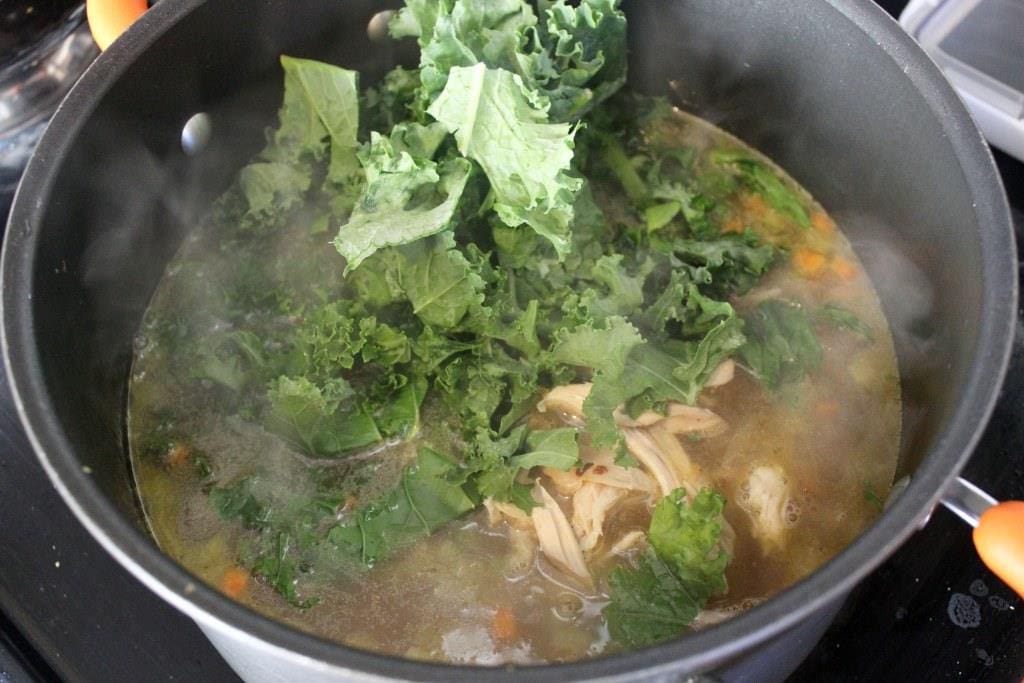 Stir the soup together, and squeeze in the juice from half of the lemon.  Taste the soup one last time and add more of anything you think it needs. 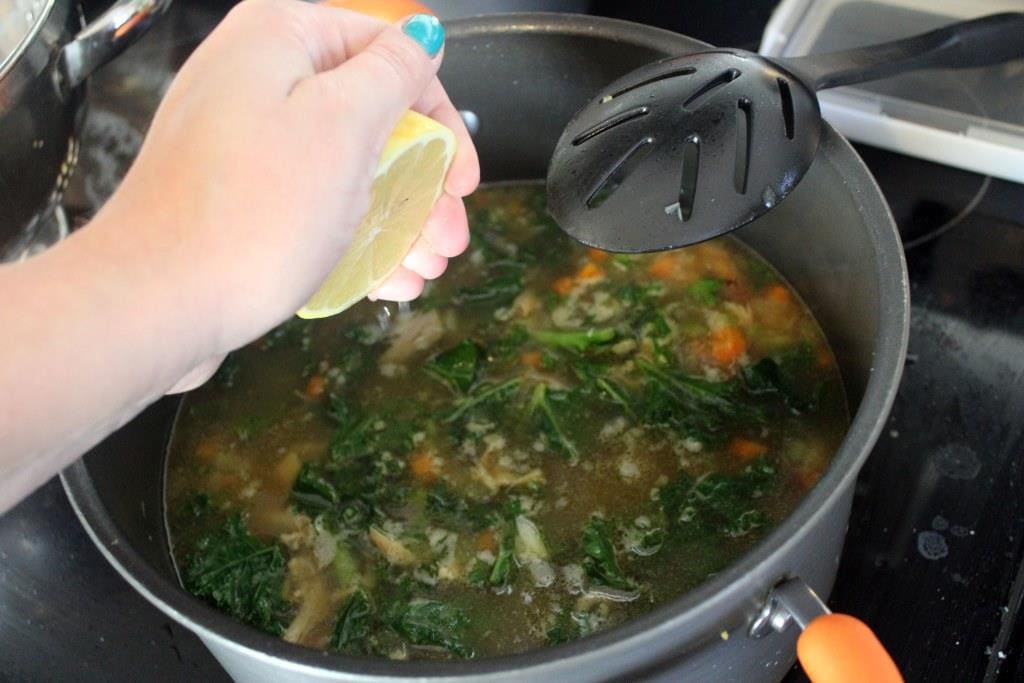 Now, to serve, I place a teensy bit of pasta in a bowl and then ladle the veg/stock/chicken mixture right over top.  I store the soup and the pasta separately so that the pasta doesn't get grody if I don't eat the soup right away. 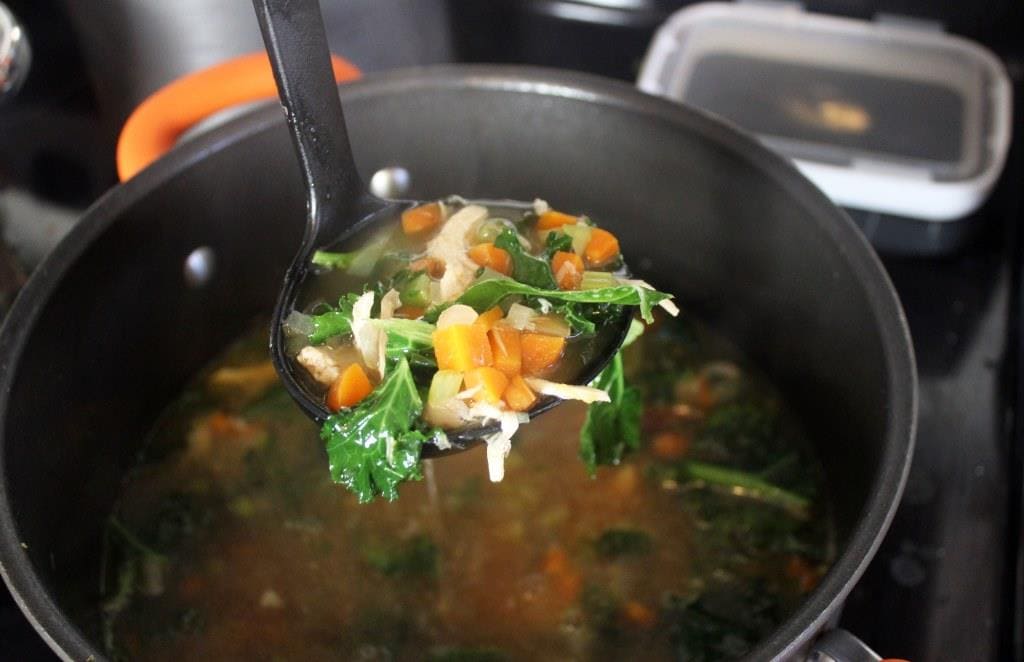 I also put a lemon on top of this particular soup because then people will know that it tastes like lemon and also because lemons are pretty.  But, Bobby Flay says to never garnish with anything you can't eat, so I guess that makes me a candidate for Worst Cooks in America.  Tell me you watch that show! 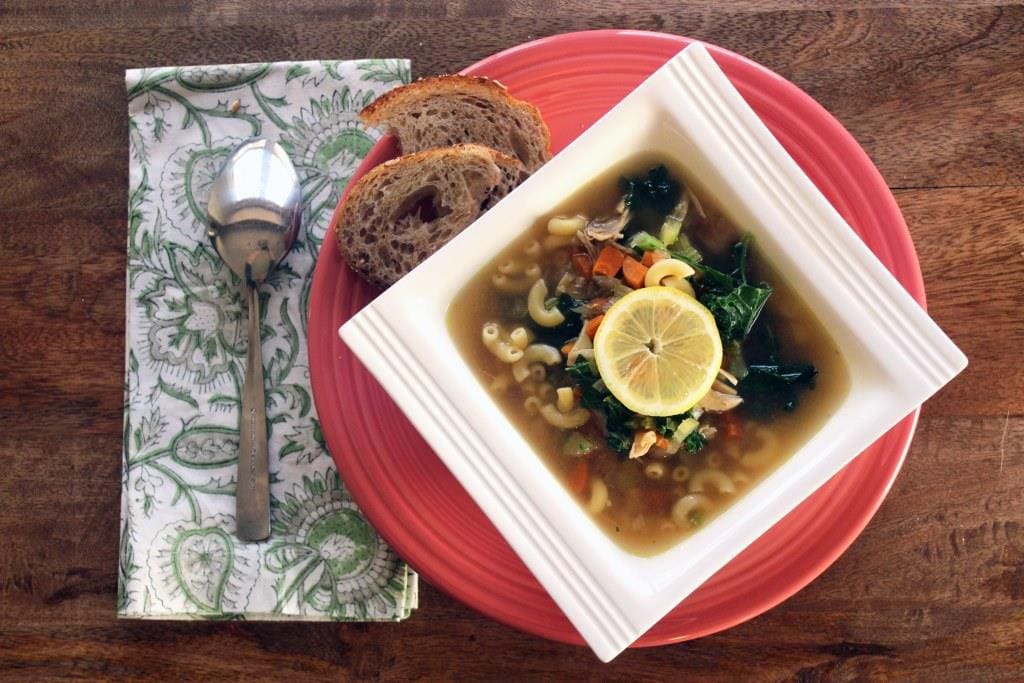 Here's your soup, guys!  It's so great to have around for fast dinners and lunches, and it's healthy and delicious so....what more do you need?  The garlic flavor is just RIDICULOUS in this - roasted garlic is so mild and sweet and almost smoky - you'll adore it. 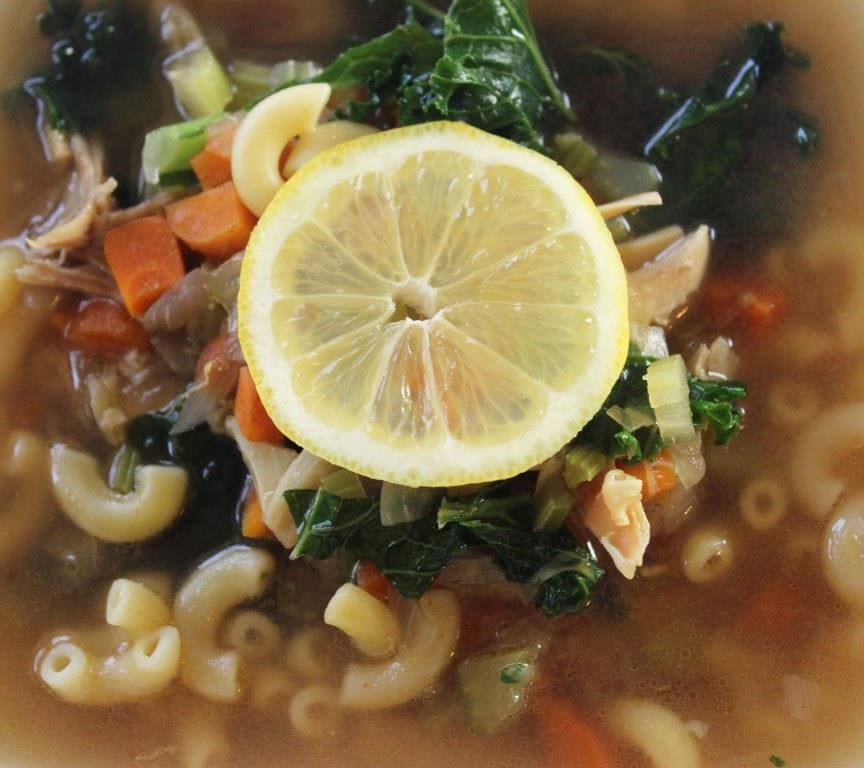 Make this - promise it won't let you down.

(there's a doggie trying to get soup in this picture) 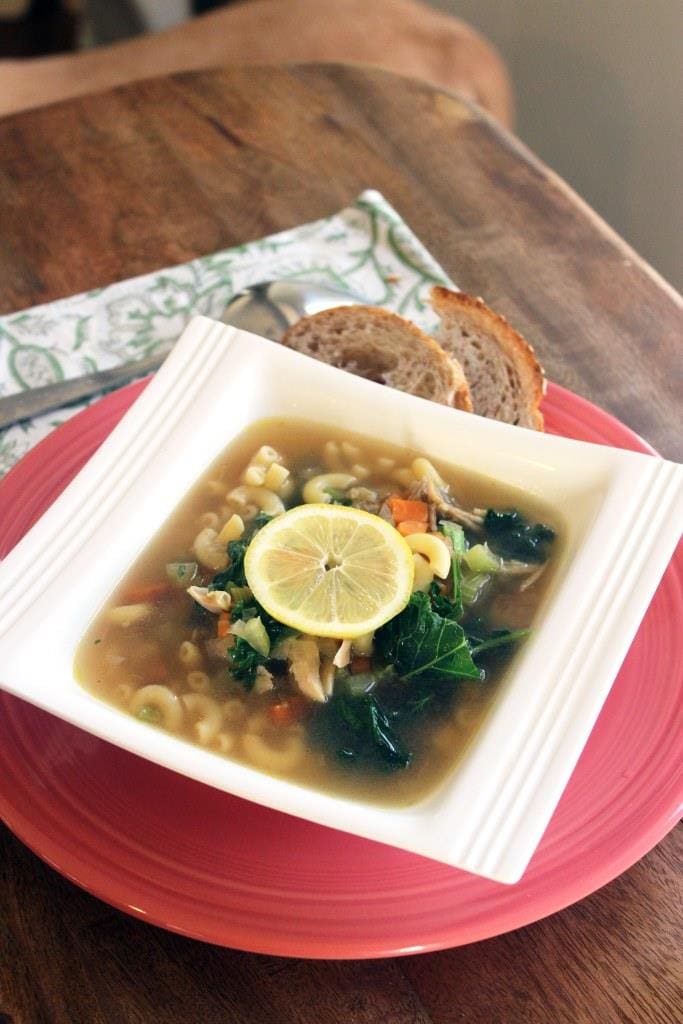