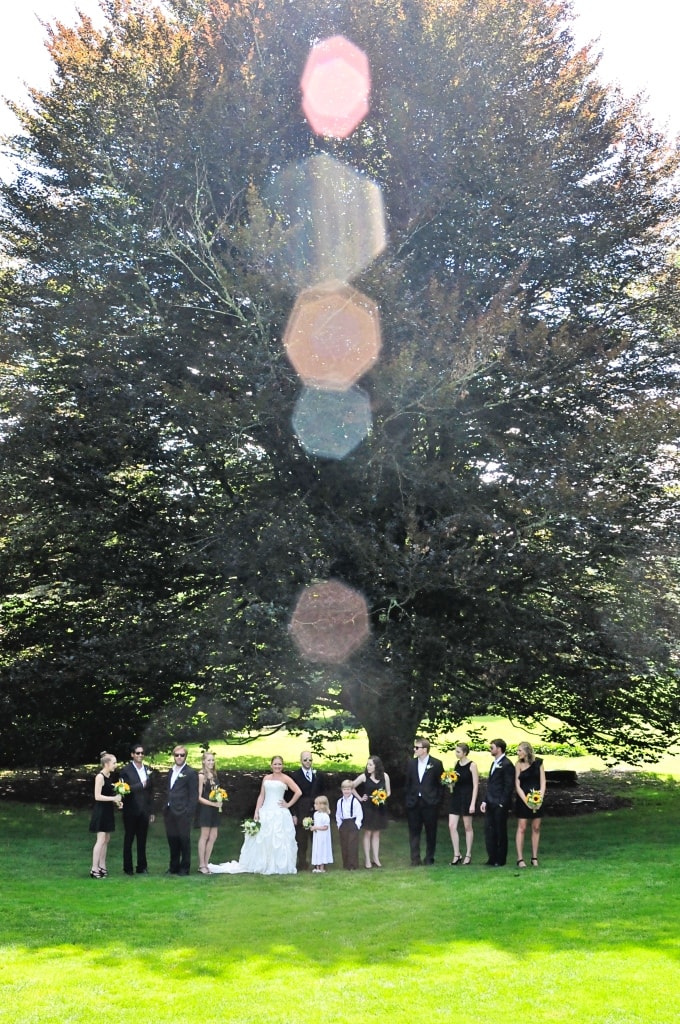 I love our anniversary.  I also love this picture because I think someone was saying some instructions for .... something ... and everyone looks vaguely befuddled except for our junior groomsman, Little Jay (seriously), who is charming and poised for the camera as always.

Also, maybe Looking Around for Instructions should be the name of our 4th year of marriage.

Since our last anniversary Jay got a new job, I got a new job, Beck turned one, we put our house on the market, took it off the market, started making plans to renovate our house, sold a car, went out of the country, and generally muddled through as best we could.  We sort of treat our anniversary like New Year's - reflecting on the last year, making a plan or two for the next one, and in this case we're all WHAT CAN WE DO FOR YEAR 5?!?! A big trip is what we're hoping for.  With all of the extra money after we rebuild the house, you know.

We have a lovely life together.  It's one that has its ups and downs, of course, and some days we irritate each other way more than others, but we are lucky in a thousand ways.  This year I've tried to keep my frame of reference for our life and our marriage as such:  1. we are going to be together, 2. we are on the same team.  A few months ago we found ourselves fighting about something dumb (clearly, because I can't remember what it was), and it occurred to us that we were fighting like we were dating, with lots of WHAT ARE WE EVEN DOING and WHY DON'T YOU JUST LEAVE THEN, language.  That 1. isn't how we feel in real life and 2. is incredibly useless when it comes to fighting.  Once we calmed down and started actually talking like grownups, we realized that if we fight with an end game of happiness and one-sidedness in mind, we're able to see things from a more unified perspective.

This small shift isn't groundbreaking, but it kind of takes the pressure to win out of a fight.  The pressure, instead, is to get back to happy, to get back to balance, to get back to us.  Saying we simply will never disagree again, that neither of us will mess up, that we won't need to scream at each other sometimes would be foolish and maybe even harmful.  But I find that any kind of issue is solved more easily and in a more timely fashion when we aren't so hell bent on being right or winning.  Sometimes one person doesn't win, and I think learning to sit with that has been important for me this year, because I love being right.  I love it so much.

Parenting is another reason we've focused so much on ourselves as a team.  Beck has seen us fight a very few times, and we absolutely hate it when she does.  We feel so guilty, because we want her to be sure that we love her so much, but she's too young to understand disagreements or yelling when someone hasn't been naughty.  We want her to feel safe and happy and, while we'll fail a million times at that, keeping her well-being in mind allows us to let little things go and save the bickering for bigger, more important issues.

We both love parenting more than words can describe, and I think we get a lot of joy out of seeing each other parent.  There are times when one of us loses our temper or forgets some rule we've made up (Looking Around for Instructions), and I mostly think that we are great at supporting each other, giving each other breaks, and staying united in our message of WE DO NOT EAT DOG FOOD AND ALSO THE DOG ONLY EATS TWICE PER DAY.  Among other important campaign points.  I do acknowledge that different phases of parenting will carry different weights on each of us, so don't be all concerned that I don't know that age 1.5 isn't the hardest stage.

As for me, I am so lucky to be married to Jay.  He's funny, loving, and the best partner.  He's getting super great after 6.5 years at knowing when I'm not interested in being messed with, and picks up on exhaustion and how he can pick up slack after a long day with Beck which seems like it should be so fun but isn't always, you know?  He comes home from work and immediately hangs out with us, never demands time to decompress, and is nice about whatever dinner I cook, even when it sucks or has ingredients that aren't his favorite.  He's great, and four years is just a drop in our bucket.  I like him.