Oh hey seasonal eating that is healthy and feels decadent all at once. 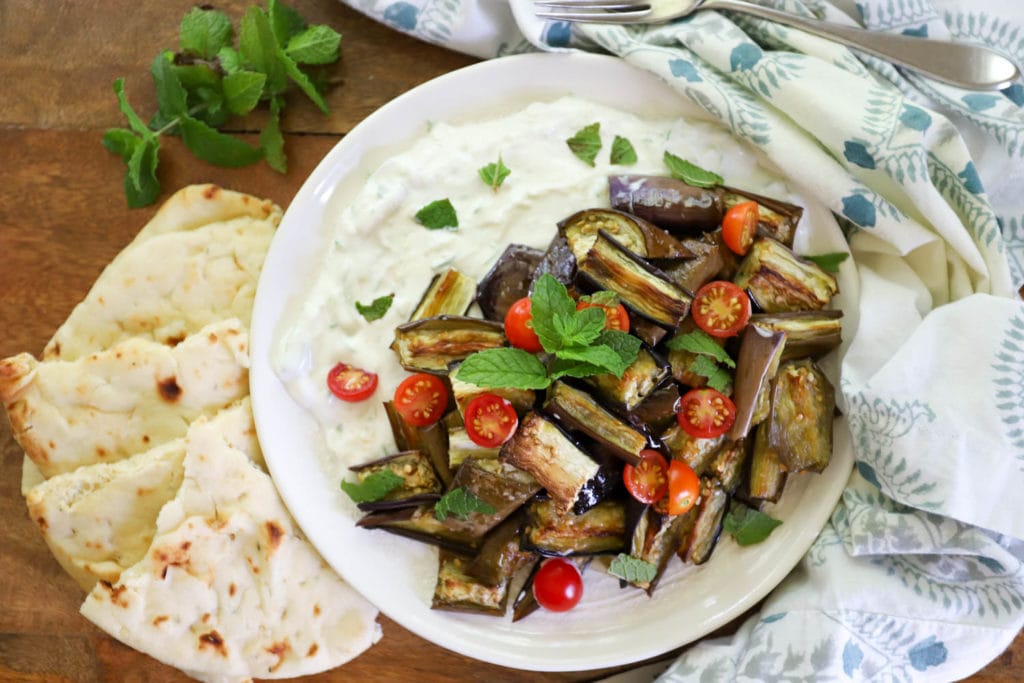 We can thank the internet for this one.  I don't have a great story here except that I read an article with a recipe similar to this and couldn't get it out of my mind. This happens a lot.  My favorite Persian restaurant in Greenville has an appetizer that involved eggplant and yogurt drizzled over top, so the combination wasn't terribly foreign to me.

This, however, was roasted chunks of eggplant over a raita/tzatziki combination with fresh tomatoes and something green on top for good measure.  The original recipe had crispy kale, there was a version with microgreens, and I went with just fresh mint because 1. it grows on my porch and 2. eggplant and yogurt with mint is a really wonderful flavor combination.

The story here is that I made this last week as Jay and Beck were about to head out for an outing.  We hadn't had lunch and it was getting late so I was like "here, have this before you leave!" Jay had a few bites and then left, and I ate the entire thing by myself.  Rest assured, I was plenty full when it was gone (and omg garlicky), but this is a dish that doesn't weigh you down even when you fill up on it, if that makes sense.  The eggplant makes up the bulk of the dish, and if you use a fork instead of ONLY naan for shoveling into your mouth this becomes a pretty nicely balanced dish.

You need!  Eggplant.  1 medium or 2 small, just whatever is in your life.  Salt and oil for roasting, fresh mint and fresh tomatoes for topping.  The sauce is yogurt (2% or full fat unless you're really watching fat intake), a bit of cucumber, sugar, cumin, salt, and a garlic clove.  Naan and forks for serving, and probably some super cold white wine. 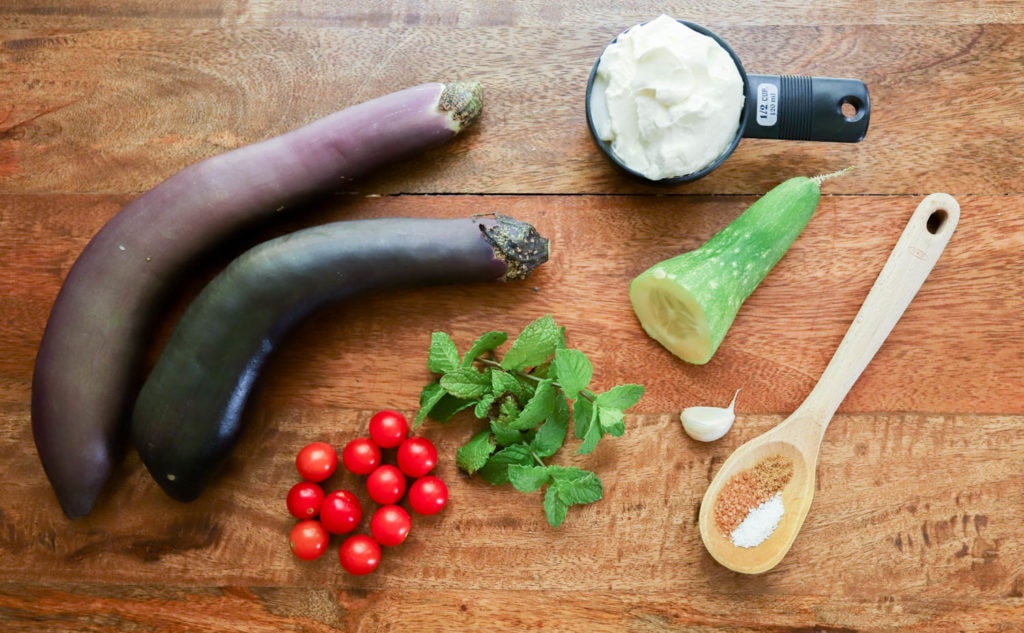 First, preheat the oven to 400F and cut the eggplant into chunks.  Drizzle it with olive oil, sprinkle it with salt, and roast! 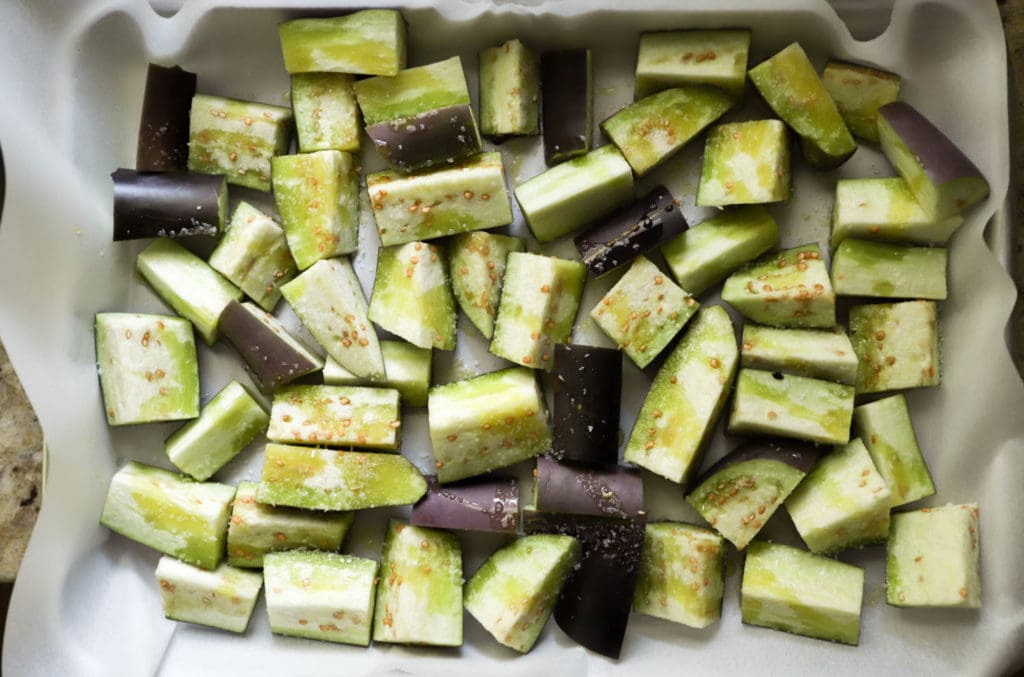 The eggplant will roast for 40 minutes or so until it's very soft, wilted, and dark at the edges. 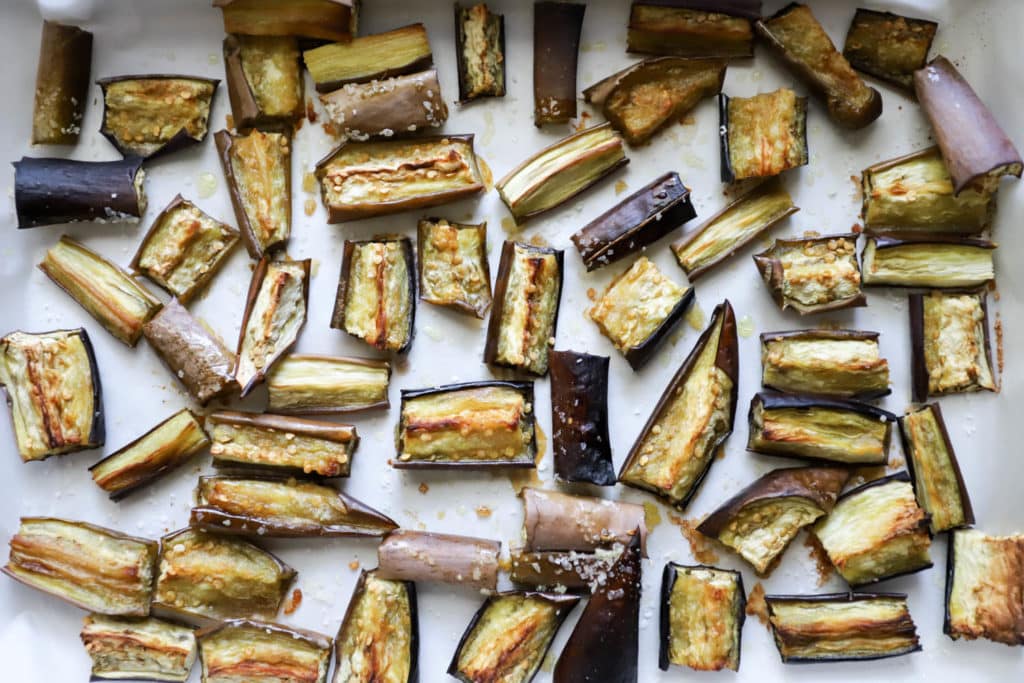 While the eggplant is working, halve the cherry tomatoes and make the yogurt sauce.  I grate the cucumber directly into the yogurt along with the garlic and the other ingredients.  Stir the sauce together and taste it - add a pinch more salt or sugar if you'd like. Keep the yogurt sauce in the fridge while you wait for the eggplant, or even make it a day or two in advance. 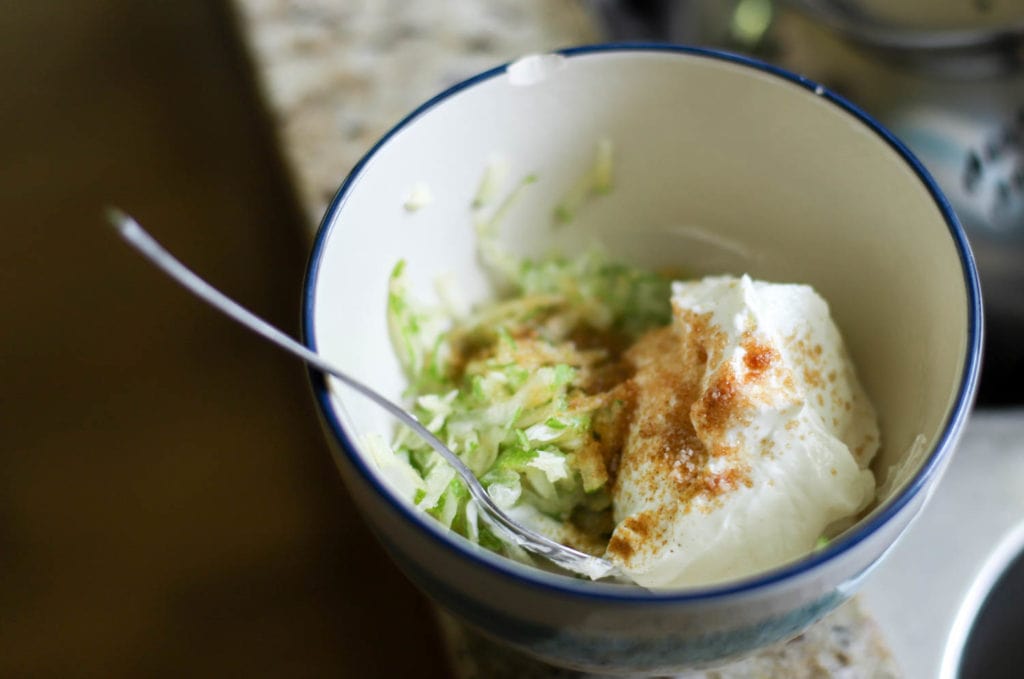 Now, I build this in layers, but you can assemble this however you'd like! 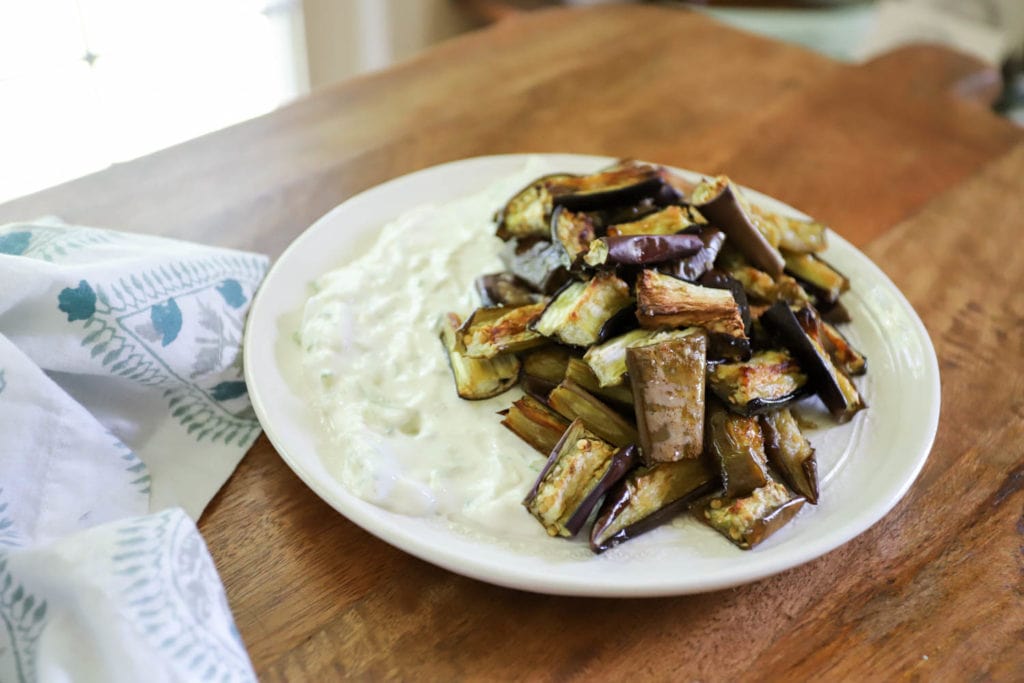 I make a layer of the yogurt sauce, top it with the eggplant, then sprinkle mint and cherry tomatoes over everything. 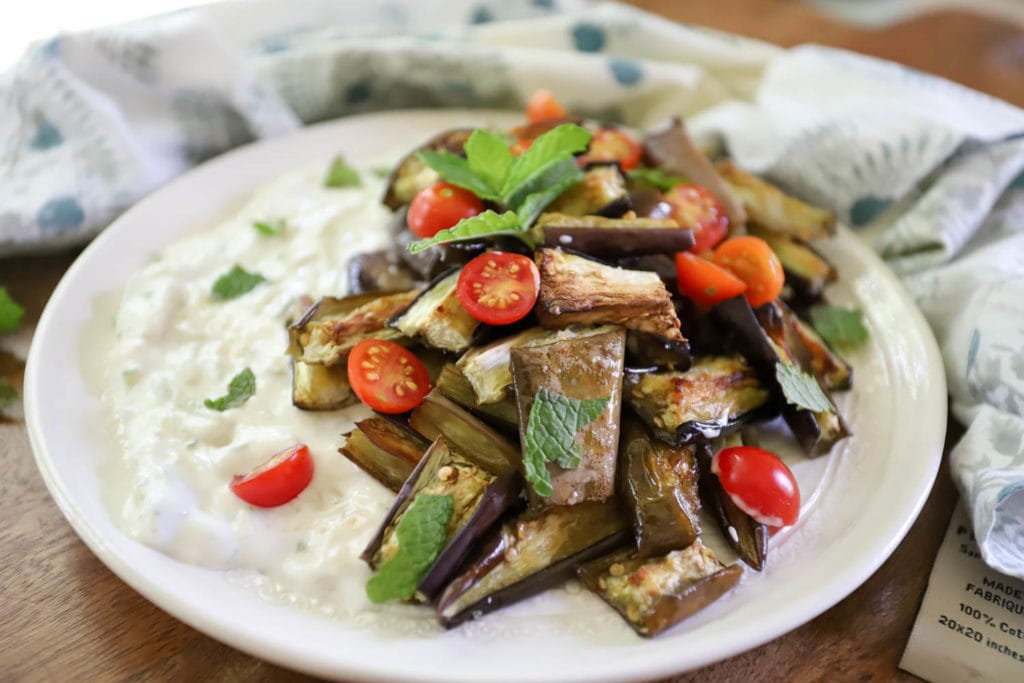 Naan or crackers or bread complete the look, and omg. 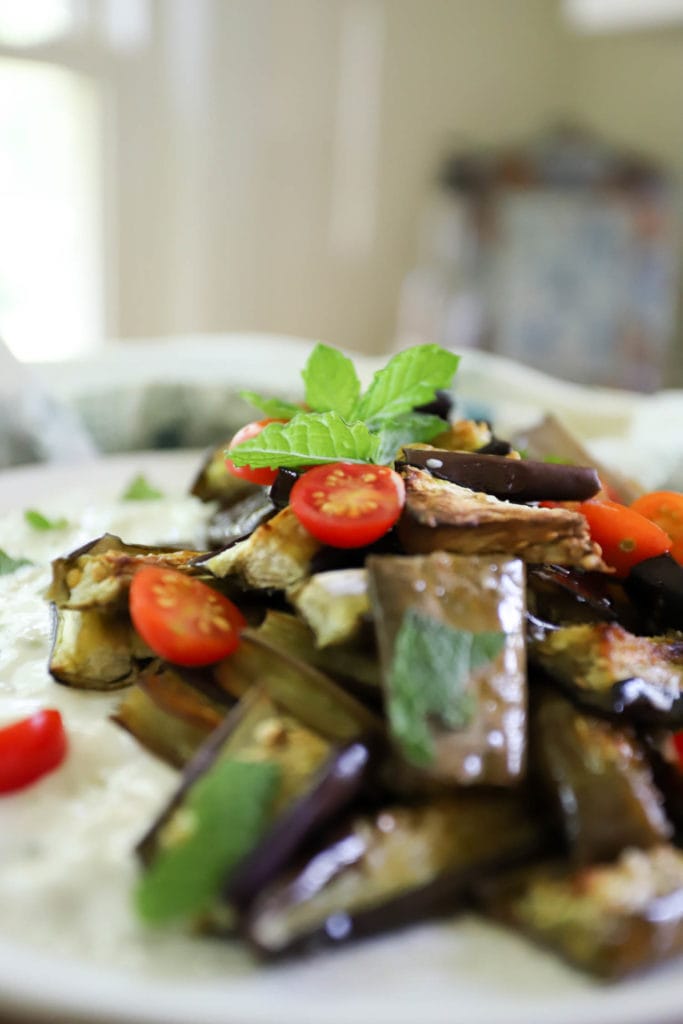 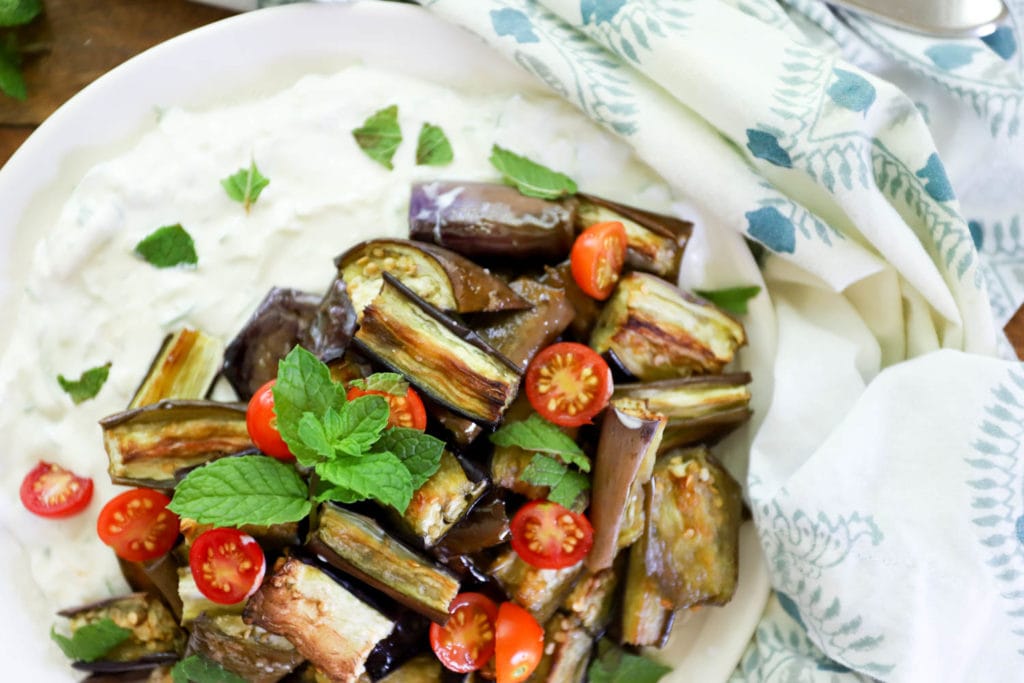 Not to mention, you can literally serve this for any meal as any part of a meal, including...the meal. 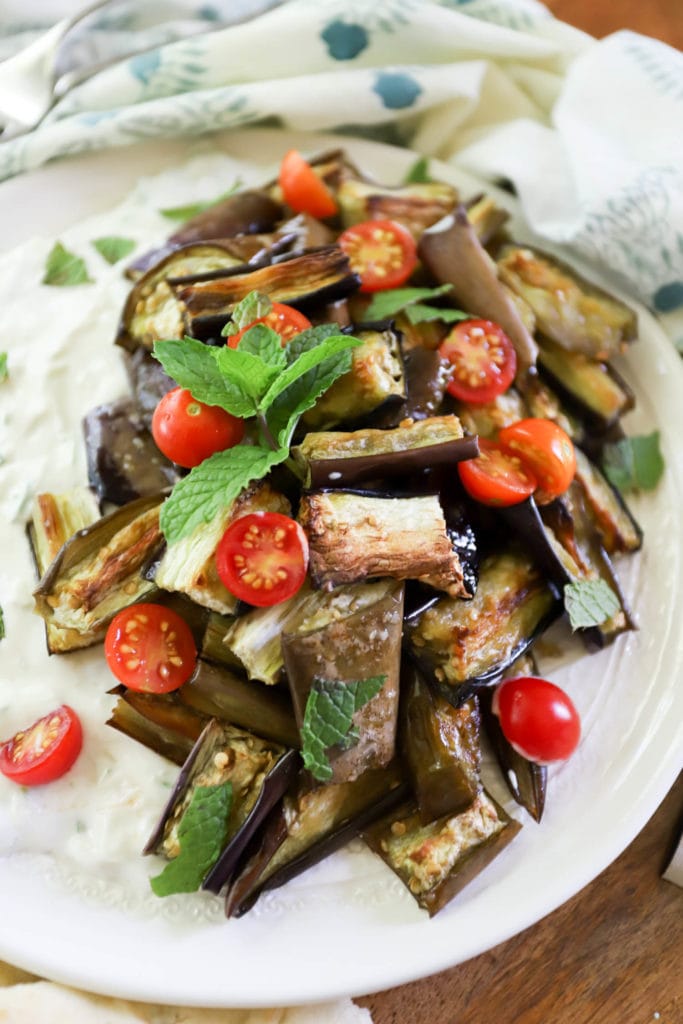