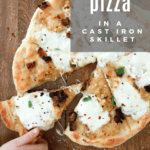 You know that when you make pizza in a cast iron skillet it's done in 10 minutes, right?

That means you can be EATING PIZZA in ten minutes.

Beck's favorite food HANDS DOWN is pizza. When we are talking restaurants is always what she "suggests" (shouts for), what she'll gobble up the fastest, and what she'll do almost anything for, behavior-wise. Yes, we bribe with food. I'm cool with it.

The thing about kids and pizza, though, is that they tend to like plain pizza, which I get because there is something so right about cheesy pizza with red sauce. BUT ALSO I love pizza with fun flavors and toppings. This caramelized bacon cheddar pizza meets in the middle - it's mostly cheese and bacon, with caramelized onions and garlic for grown up flavor, and basil at the end for a huge pop of freshness.

Ingredient notes! I combine cheeses here: extra sharp cheddar for tons of flavor and fresh mozzarella for some ooey-gooey-ness. Use any combination of cheeses you like, though, or all one type!

If you notice, all of these ingredients can be made or bought well in advance. Caramelized onions take a good amount of time to caramelize properly; at least an hour, more if you've got it. I often caramelize an onion or two on the weekend and can literally do two or three other meal prep items or kitchen tasks while they work. As long as you stir them every 10 minutes or so they'll be great!

I also make the bacon in advance - maybe with breakfast on a weekend morning, then crumble some and keep it *without eating it* until you want pizza! I buy pizza dough from several local places or grocery stores. Honestly, my tried and true favorite is Publix dough, but they run out all the time so I try to get some when I see it but ALSO not tell Beck until I'm sure they have it. I use Publix dough to make my favorite focaccia, too! It's super foolproof.

So! Once we have our ingredients ready, things go really quickly with the cast iron skillet method. I use a 12-inch version from Lodge that is perfect for one pound of pizza dough. You could definitely make two smaller or thinner pizzas with this recipe, but I love a fluffy, pillowy dough with these heavier toppings.

When you're ready to cook, preheat the skillet with a bit of oil for about 10 minutes over medium heat until it's nice and evenly heated, and preheat the broiler to high.

When the skillet is hot, we quickly assemble the pizza right in the hot skillet. Stretch the dough carefully so it fills up the skillet, then place it right in. Sprinkle the dough with salt and pepper, then gently spread on the caramelized onions (they'll be mushy at this point, but don't worry about covering the crust evenly like a sauce), cheddar, garlic, bacon, and mozzarella. I like cheese over and under the bacon so that it doesn't all fall off OR get lost under too much cheese.

There is no such thing as too much cheese.

So the idea here is: while you arrange your toppings on the pizza dough, the bottom of the pizza cooks in the skillet. Check it when your pizza is assembled; it should be golden on the bottom in just 4 minutes or so. When the bottom of the crust is golden, stick the entire skillet under the broiler for another 2-3 minutes. Don't wander off! The timing here depends on your oven and how close your racks are to the broiler, but the pizza is done when the crust and cheese are just bubbly and golden on top.

Boom. Omg. Cast Iron Skillet Pizza in under ten minutes, yes we can.

Topped with parm, red pepper flakes, basil, pepper, your choice! I choose all of the toppings all the time.

I don't need to describe to you what bacon and cheddar and caramelized onions taste like over puffy dough blanketed in creamy mozzarella. Instead, I'll paint you a picture:

15th %ile three and a half year old in a dress with hair halfway down her back BOUNCING like a Tigger next to the super duper hot dangerous skillet while I took these photos saying "do you need my hand in the picture yet? is it cool enough yet? are you ready now?" with this huge grin on herself.

This pizza will make you bounce with excitement, is what I'm trying to say. The method is so much fun too; we do it for bigger groups sometimes and just make pizza after pizza with different toppings each time. One comes out, everyone gets one slice, we make a new one!

Eat some foods this weekend that make you bounce with excitement. I promise it's worth it. Enjoy this!

I love using bacon leftover from breakfast for this. However, if you're making bacon just for this recipe, keep in mind that it'll cook some more under the broiler, so don't make it too crunchy.

To caramelize an onion: Thinly slice one or two onions and place them in a skillet over low heat with a drizzle of oil and a sprinkle of salt. Cook SLOWLY, stirring every 10-15 minutes, until the color is very dark and the onions are soft and sweet but not browned like a stir fry. This takes one hour or more, sometimes 2-3 hours depending on your onion and skillet. I like to do this while I'm cleaning the kitchen or meal prepping other things.

This is the cast iron skillet I use.

Use any pizza dough that you like! My favorite premade is from a local pizzeria that sells it frozen or Publix.