I created something of a firestorm the other night when I posted a picture of me DOWNING a quesadilla with Asian flavors and sriracha sour cream.

Now, by firestorm I mean that 3 people or so commented on the photo, but it made me want to hurry and show you the ground beef filling that was in that dang quesadilla (movie?  anyone?  no?). 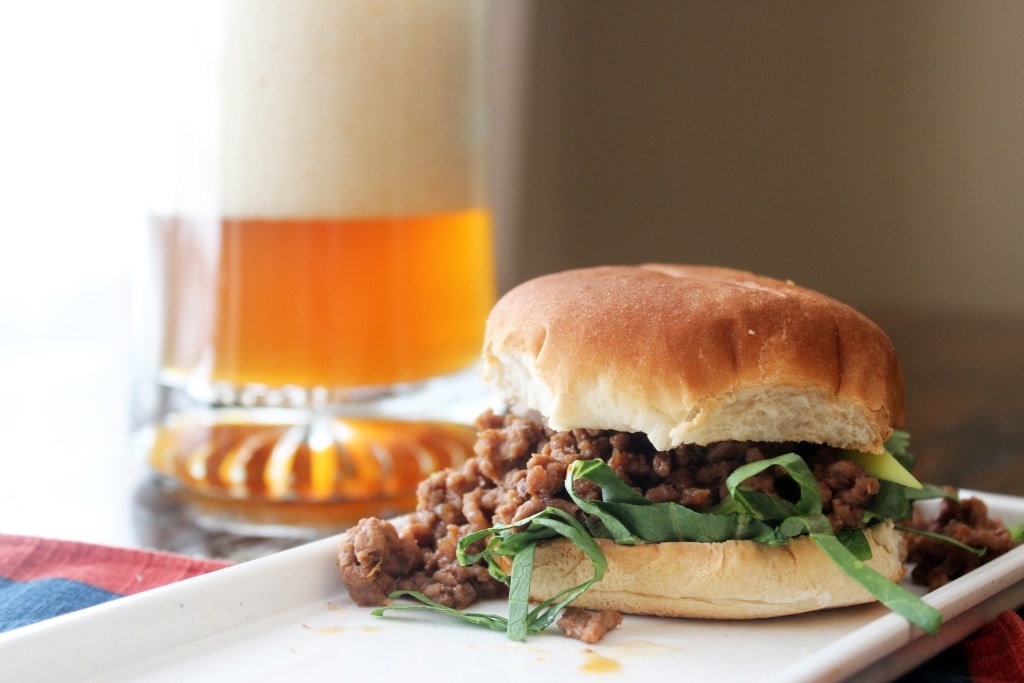 It was leftover from these Asian-style sloppy joe's.  Sroppy joes, as my husband requested I title this post, but we won't EVEN go there.  Racist.

The joe's themselves, though, were FANTASTIC.  I'm fine with regular old American sloppy joes, but the flavors in these were like .... lettuce wraps with crunchy toppings and deep spicy flavor soaked up by a squishy bun.  YOU CAN'T MISS WITH THAT SENTENCE.  Here's how I did it:

For the meat, you'll need ground beef (fake beef crumbles would be great here!), soy sauce, sriracha or other hot sauce, hoisin, and oyster sauce.  For the sloppy joe, any buns you like (soft and squishy are my favs), cilantro, lettuce, and green onion. 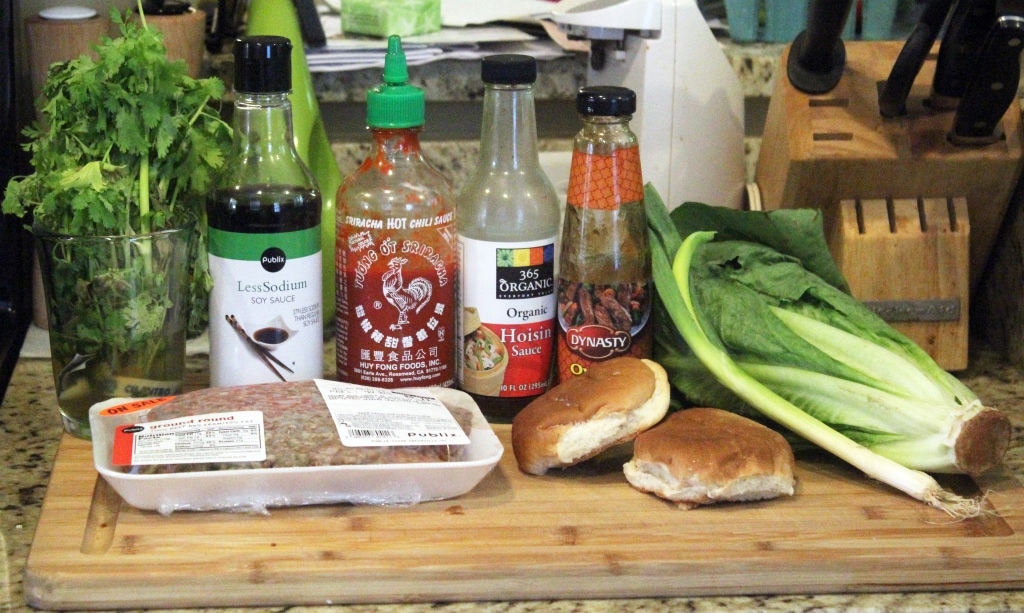 The hoisin and oyster sauces are wonderful - if you're not familiar with them, they're the two components that pretty much make brown sauce taste BROWN in Chinese and Asian-fusion cooking.  They're readily available, so try one or both of them soon if you haven't used them before!

All we have to do here is cook the meat, broil the buns, and prep the toppings.  You can be eating this meal in 20 minutes.  First, add the meat to a skillet with a drizzle of olive oil over medium-high heat.  If you wanted to use fresh meat instead of some that'd been sitting in the fridge for 4 days I guess that would be fine. 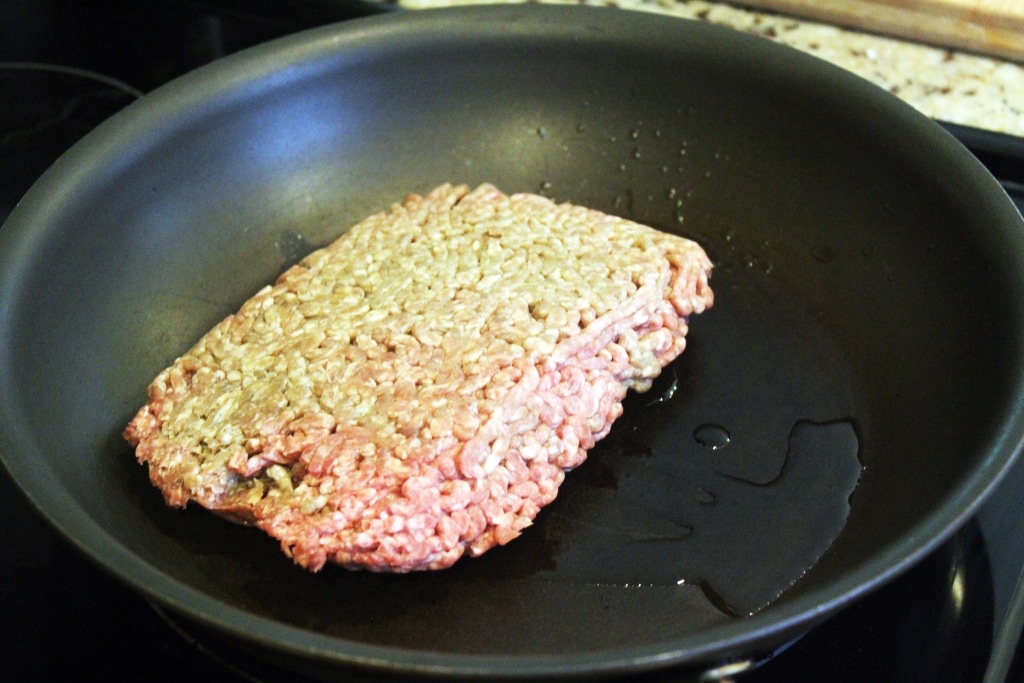 As the meat cooks, break it up with a spoon - I think a law of sloppy joes is that they have to be crumbly, right?  No big pieces of meat. 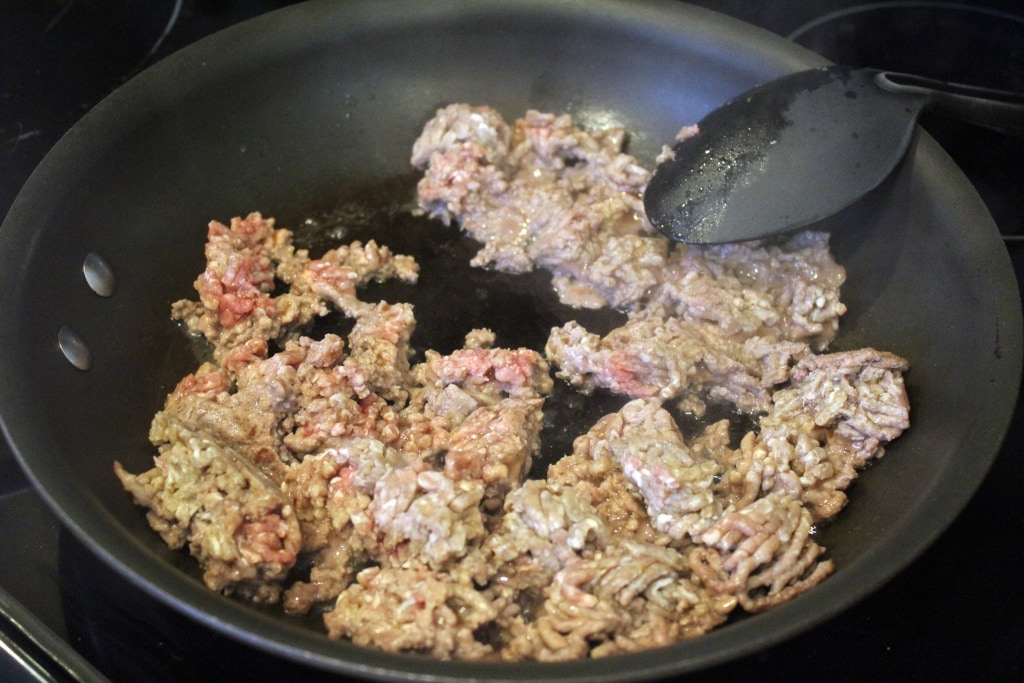 Another important part of sloppy joes (or any ground beef, for that matter), is really browning the meat.  So, break up the meat with a spoon a bit, then let it sit for a minute or two.  Then, stir, break more pieces up, and repeat - that way, when the meat is sitting it'll get nice and brown on the edge touching the pan. 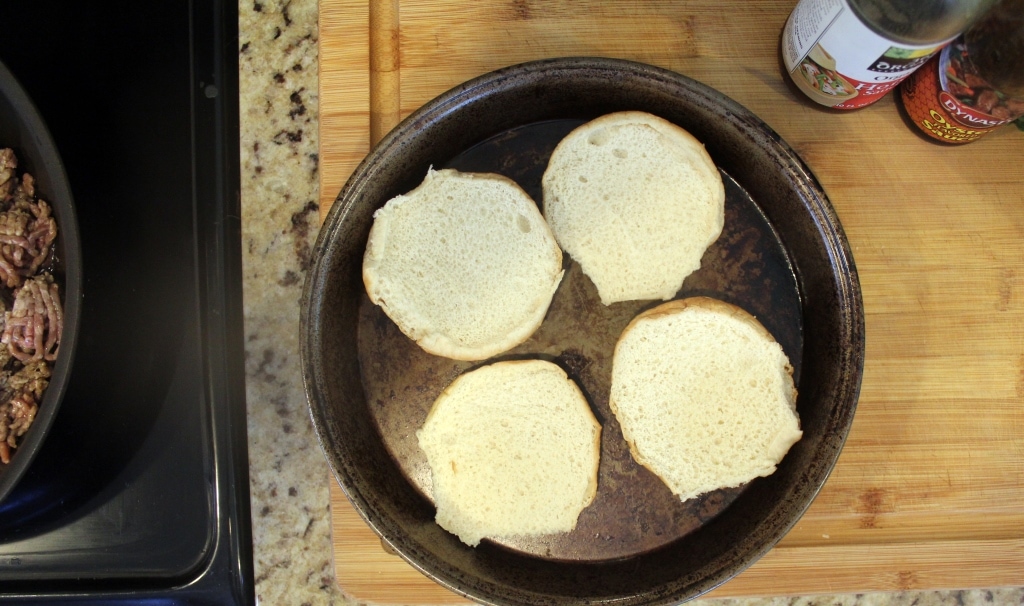 While you are letting the meat brown (leave it the heck alone!), broil the buns face up for 2 minutes or so until they're golden. 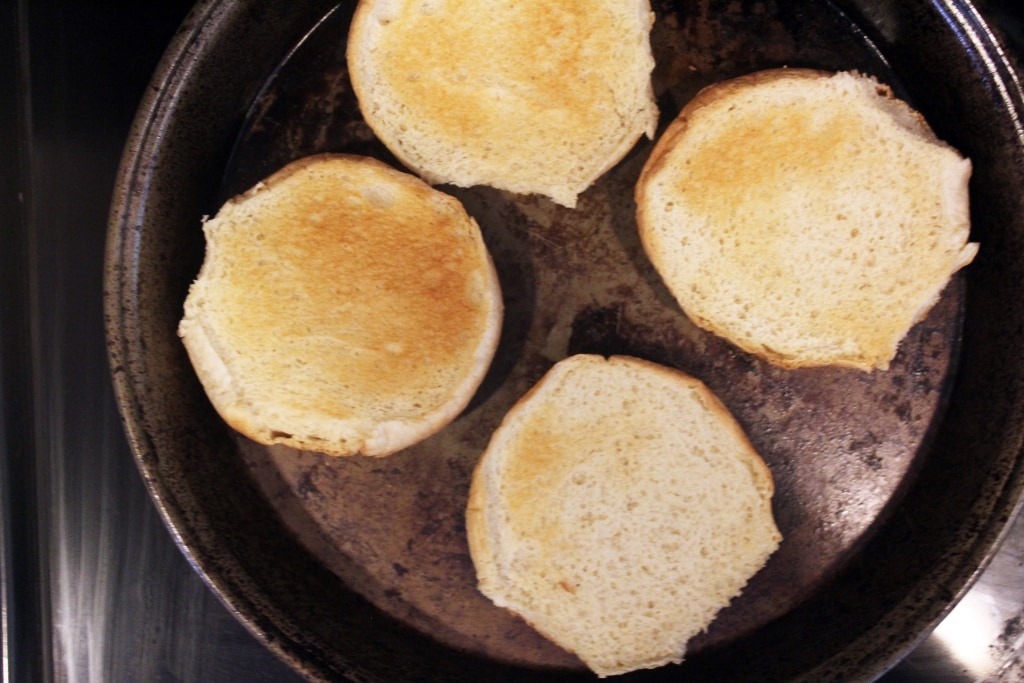 When the meat is mostly cooked, add the seasonings: sriracha, oyster sauce, and hoisin.

Stir that all together, then grab some water.  I was guzzling because I'd just done yoga, so I just dumped ¼ cup or so into the pan to make a sauce with the seasonings. 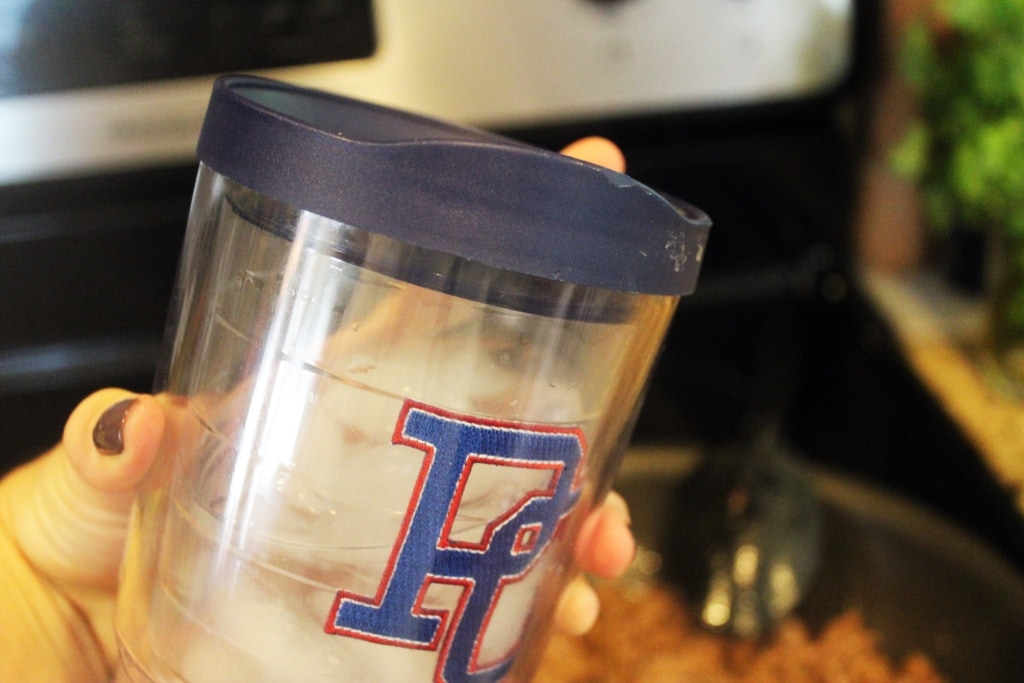 When the first three seasonings have formed a sauce with the water, taste the meat and add as much soy sauce as you'd like to flavor the meat a bit more.  Add more sriracha if you'd like too! 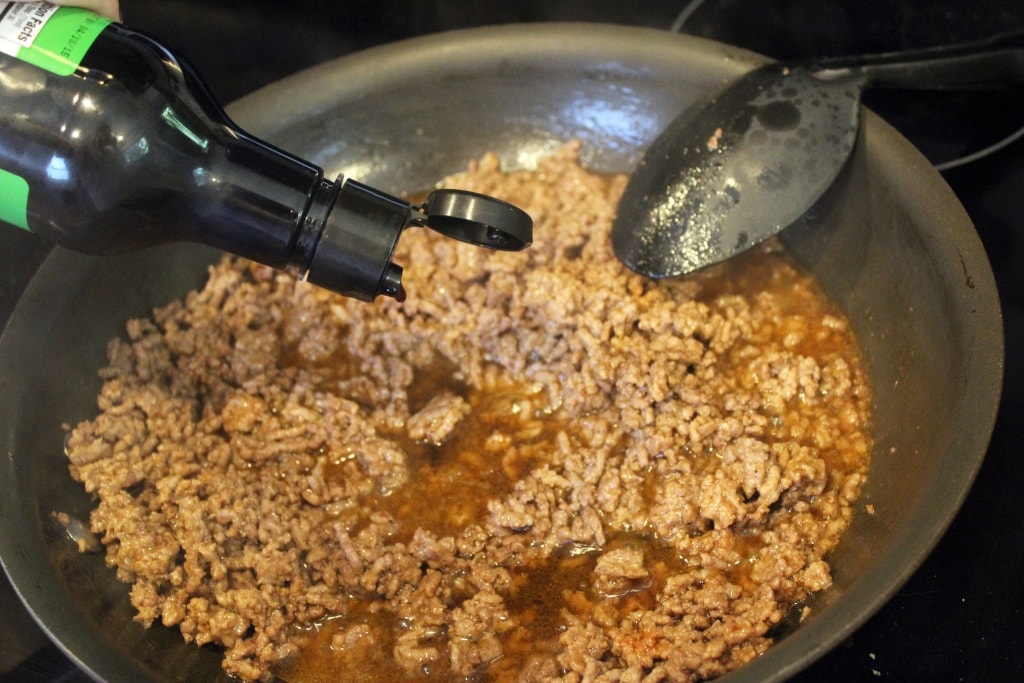 Turn down the heat to medium or medium low so the sauce is simmering but not bubbling too much.  If the water all evaporates, add a bit more - we want saucy but not soupy joes.  Make that happen.

While you let the sauce simmer, just for another 5 minutes or so, prep the green toppings.  Shred some lettuce, tear some cilantro leaves, and thinly slice the green onion on an angle because it's pretty that way. 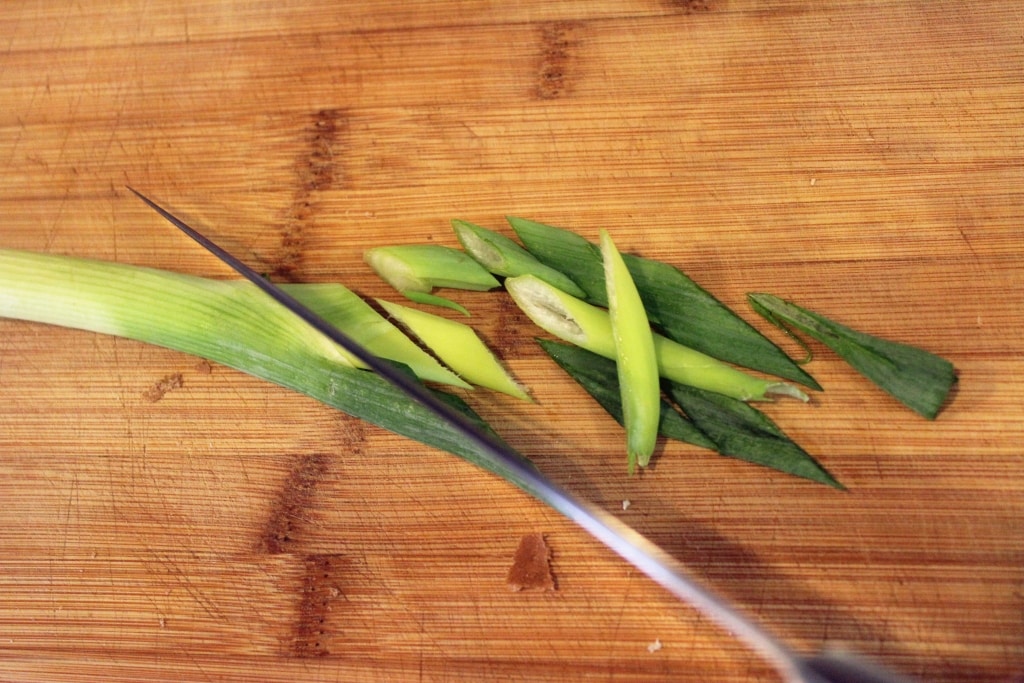 Also while the sauce simmers, make a bite of meat and random toppings to shut your husband up.  Day in the life, people. 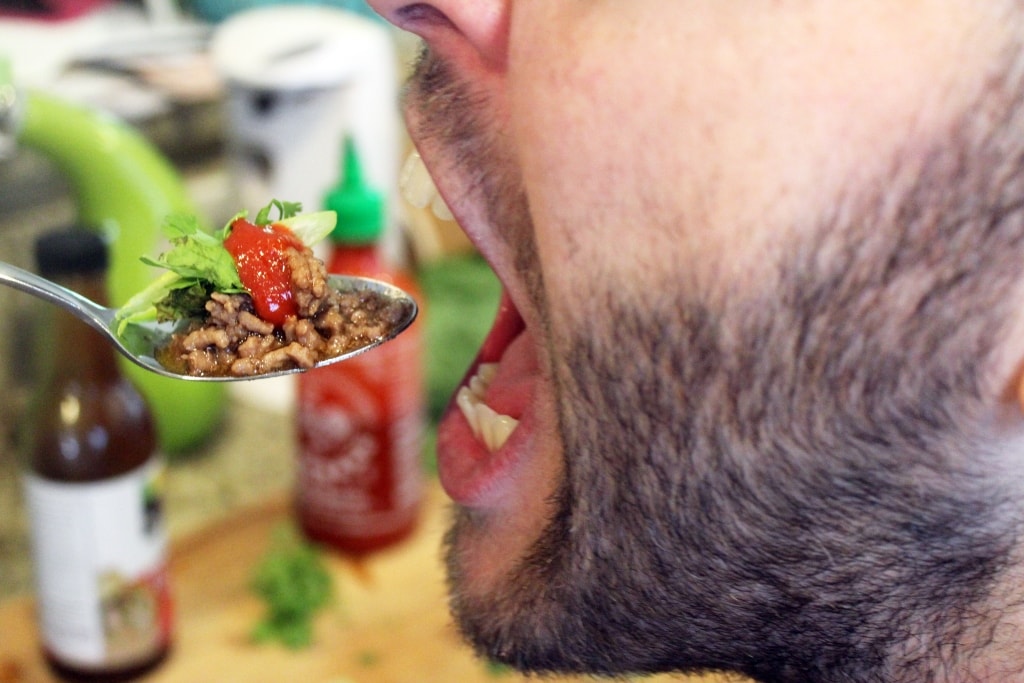 Now, you could do all this WAY ahead and just eat whenever.  It was 10:30am in these pictures and IT WAS TIME.  To assemble, start with some lettuce piled on the bottom of a bun - that'll help soak up some of the sauce! 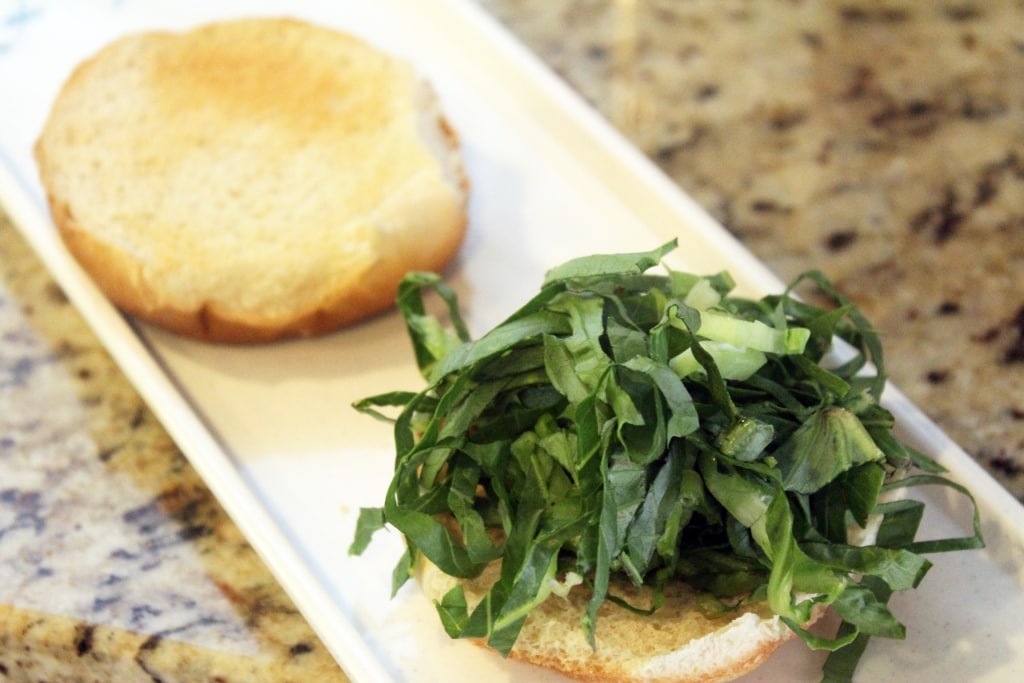 Then, heap some meat and other toppings on the lettuce. 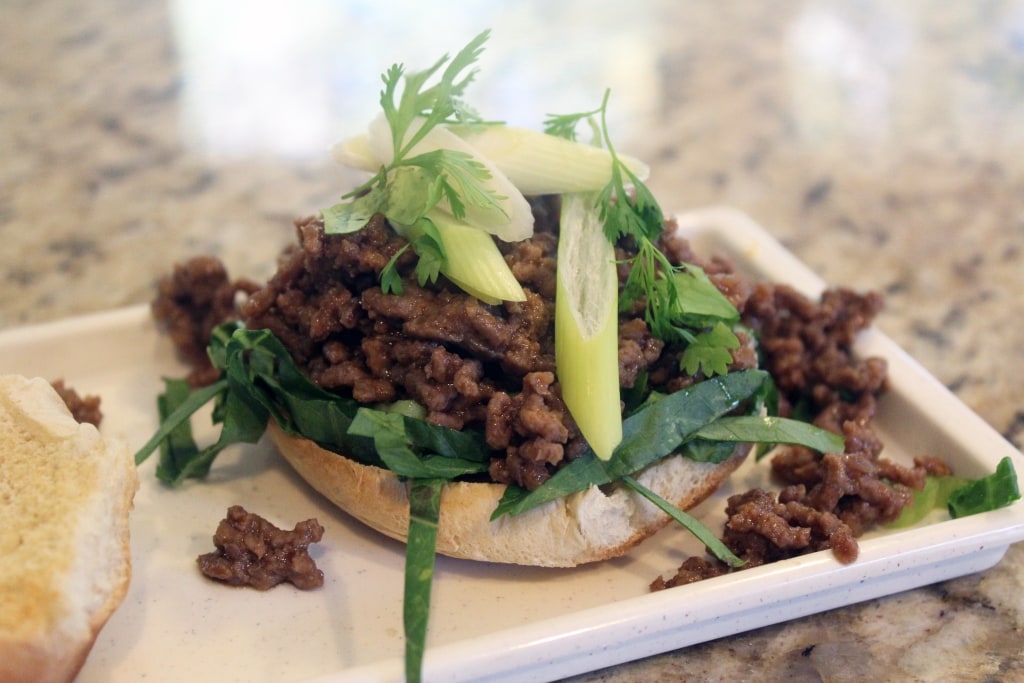 If you'd like, add even more sriracha to the whole thing - why not, right? 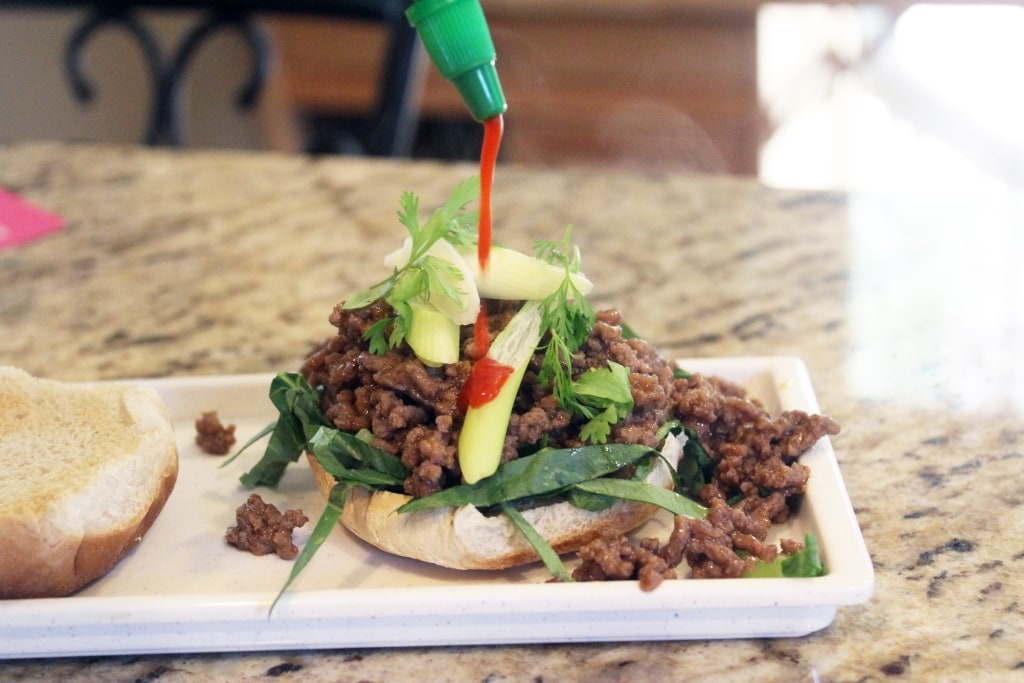 That there is a very sloppy sloppy joe. 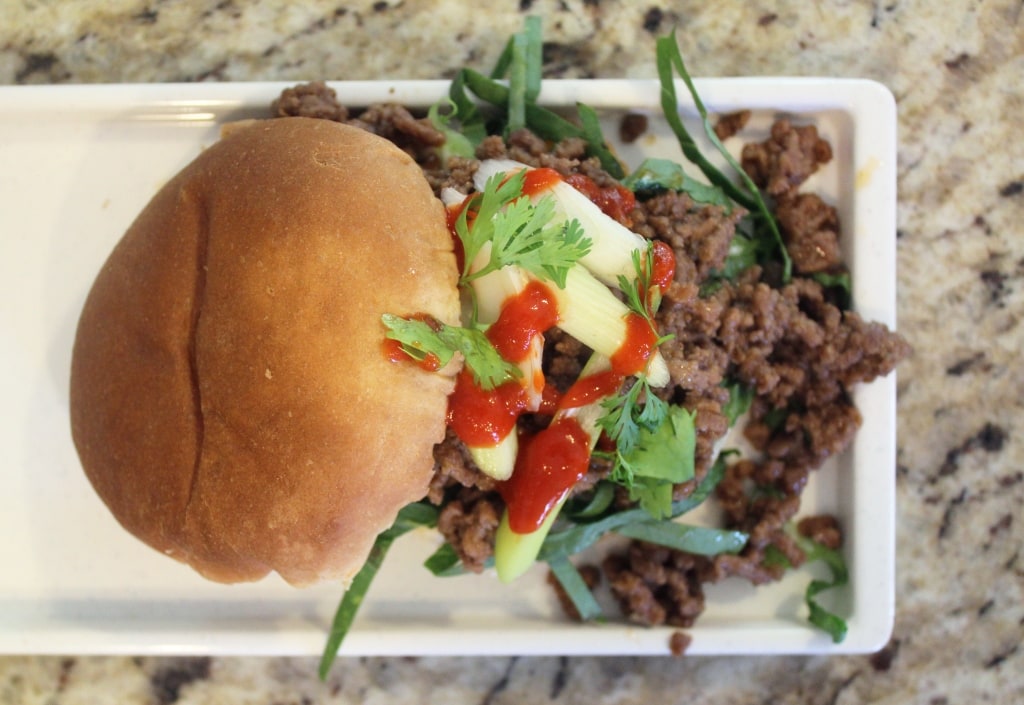 You are going to love these, and you very well may find that you'll require about 4 as a meal.  They can of course be made with any ground meat you like - pork would be especially delicious. 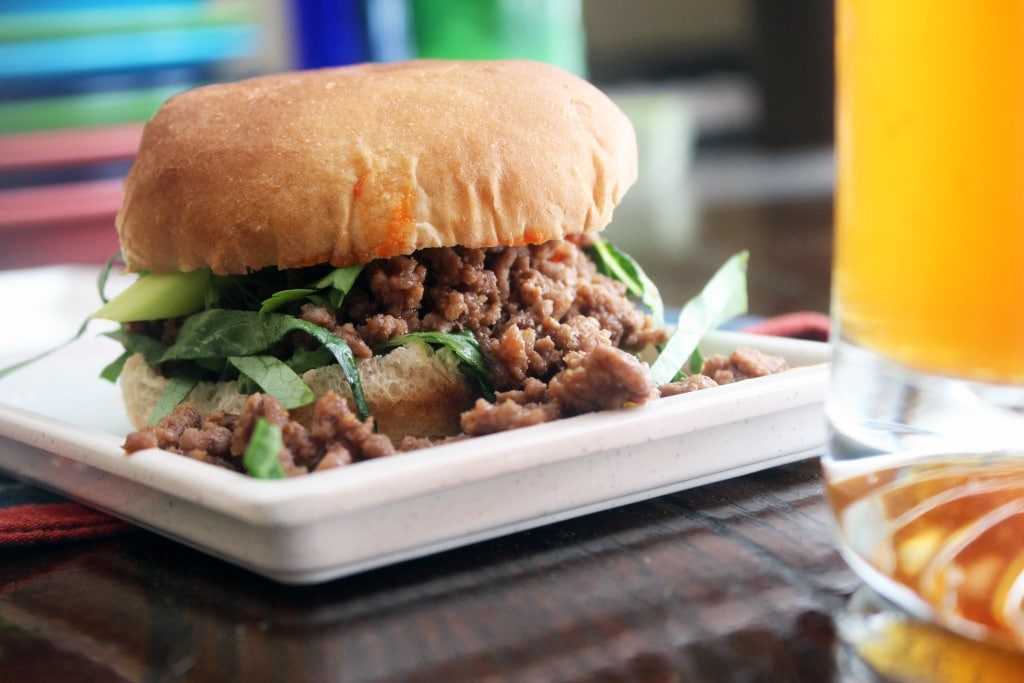 The flavor of the meat with the sharp toppings is WONDERFUL, so don't skimp on the green onion especially. 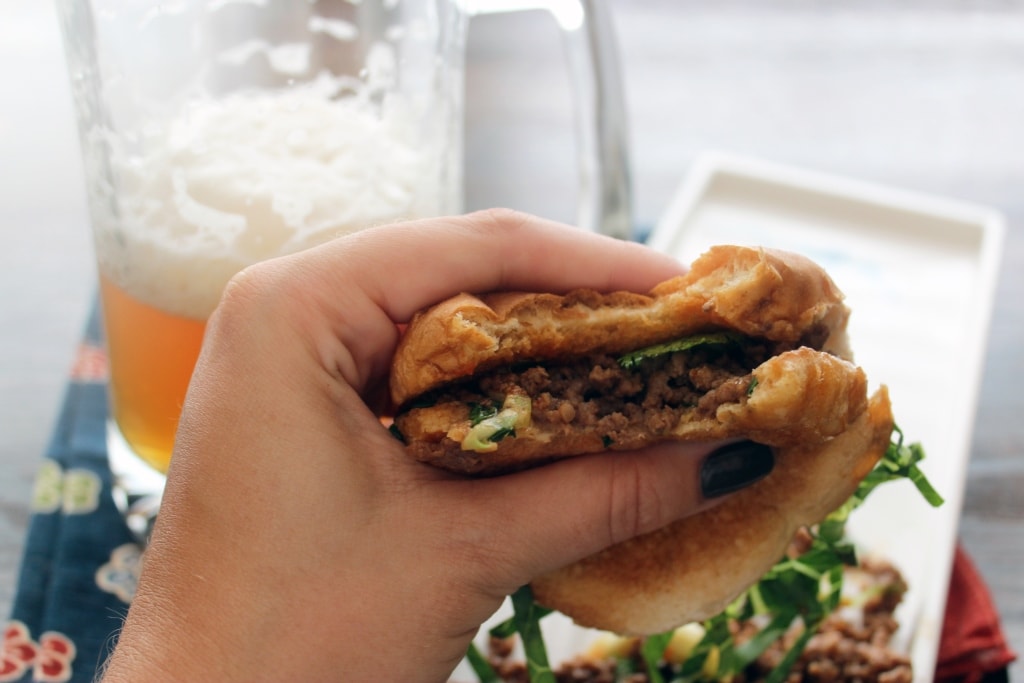 Beer is a must, I think.  Serve with beer.  Or ginger beer if you're not into the booze. 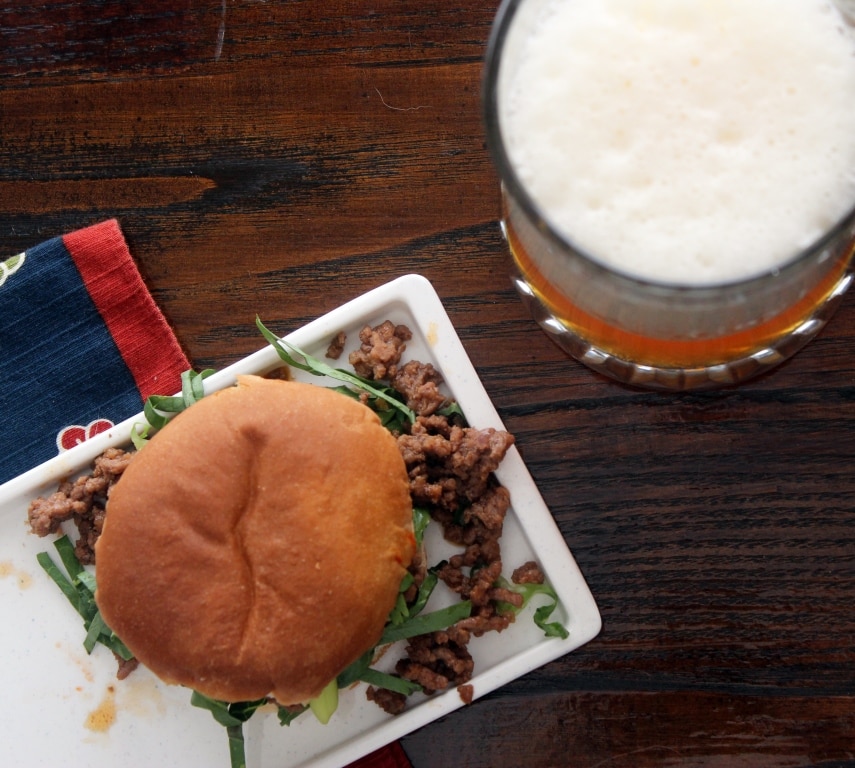 Enjoy these, friends!  They're DELICIOUS and you'll love them.  The beef mixture itself could be used for ANYTHING, but there's something about a sloppy joe that's just GREAT, isn't there?

In other news, it's almost Weekend Potluck - and the weekend!