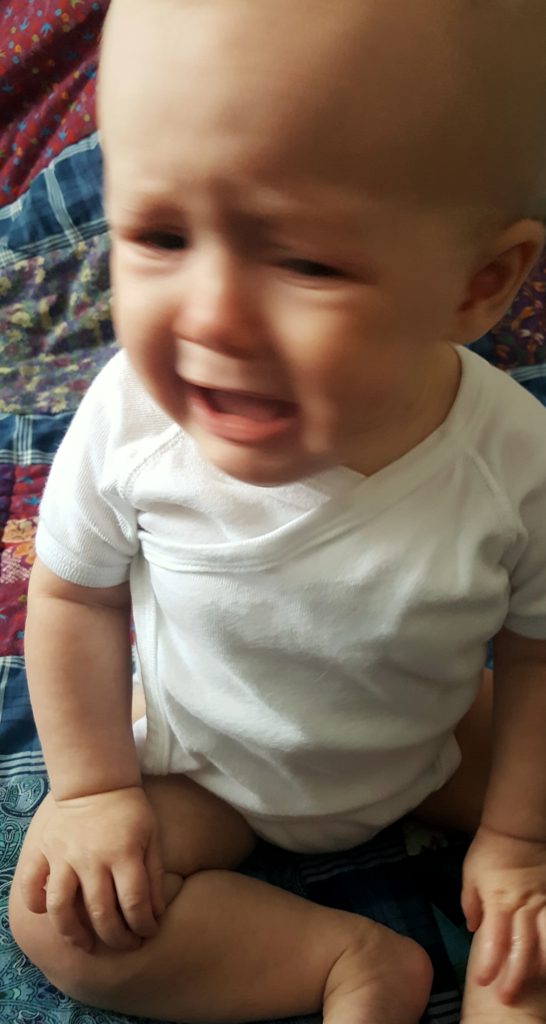 I think this time in the first year of life is when things kind of settle in, for better and for worse.  The better is that you kind of know what's happening with sleep and eating and how to keep the kid quiet (crackers).  The worse is that there is a point, and it's different for everyone, where you are familiar enough with your kid and the "omg they're so perfect" wears off a little bit (Beck is still the most perfect, don't worry), and you realize that you will never be able to do anything ever again with whimsy like you used to.  Because now, in addition to regular adulting and planning and calculating of risk, you now have to think WWBD?  What Will Baby Do?  If I want to stay out past her bedtime, will it ruin our week?  If I drink too much will she get drunk or have liver failure (no, according to the internet and the doctor).  Every decision involves the baby at some turn.  I don't say revolves around baby because I really don't think it has to, but now there's another person in your life, your house, your family, and they get a say too, whether big or small.

The good, though, is so great, that 99.9% of the time I don't mind involving Beck in decisions.  The other times are when it's Saturday morning and I'm all PLEASE FOR THE LOVE OF GOD SLEEP PAST 6:45 but then I remember she's on a schedule that she designed herself and we can't fault her for that now, can we?  So I make Jay get up with her and get my way anyway.

I think, and maybe moreso for women, the biggest Worse of having a baby is that no matter what we tell ourselves or how hard we try to chill we are going to try to do It all, whatever It is.  Being the perfect housekeeper, best wife, Pinterest Queen, working full time - there's always something we are stretching for, whether or not we hit it.  I've let a lot go, some by choice and some forced, but sometimes I just can't help it.  Take the aforementioned Jay Gets Up With Beck On Weekends.  First, I feel terribly guilty for that because we all wake up at the same time all week, so that effectively means that he NEVER gets to sleep in.  Second, I can't sleep if I hear her at all, and it's kind of hard to keep an 8 month old quiet (she screeches), so I kind of lie there pleased that I'm not dealing with her but not sleeping and then OH HEY, Guilt, you just thought in your brain that you were glad to not be with your kid.  Get up and go puree her some stuff, bitch.

So I get up and I puree her some stuff, since I'm not sleeping anyway.

Nursing (or not) is one of those things that comes with tons of guilt and shame and doubt and of course is all compounded by hormones and exhaustion.  But, for me, it's the most fun still.  Beck is becoming more and more disinterested in nursing during the day because everything else is just so much fun, but of course is still hankering for boob in the middle of the night, and isn't that always just the way things go?  When we moved her out of our room at 6 months she put herself down to one or two wakings per night, and since I still like nursing and want to keep my supply up (as much as possible, it's dwindling fast) I get up with her and she eats and we go back to bed.  During the day when we're home together she nurses every 3 hours, but it isn't for very long and she latches and breaks away often to grin at the dogs or grab toys - it's all very cute, but sad that she doesn't want to snuggle alllll the time anymore.

The bane of my nursing existence is not the act itself, but the mother effing pump.  Wait for it, apparently this is a real thing.  About 2 months ago I was getting less and less when I pumped, whether at home with Beck during the day or at work.  In 45 minutes, after 3 hours of not nursing, I'd get MAYBE an ounce total (from both sides, not an ounce from each breast).  For reference, I used to pump 2 ounces per side, and some people pump even more than that when their babies get older.  So I was spending tons of time pumping, multiple hours per day, and getting next-to-nothing.  At this point Beck was eating more and more solid food, so I knew she wasn't hungry, but I really wanted her to have breastmilk until a year, so I kept with it, and it got worse.  Naturally.  So I did more reading and more reading and apparently some women's bodies just lock up at the sound of the pump after awhile, some kind of biological defense against something taking milk that should be for the baby.  Which it is, but my boobs don't know that.  My pump is LOUD, and obviously feels nothing like a child nursing, and so it just stopped working.  I got the idea online to try and nurse while I pumped, and BOOM.  Almost a whole ounce in 4 minutes of nursing.  So that's what we do now.  Beck nurses on one side and I pump on the other, and it's squirmy and complicated and probably hilariously barbaric to watch, but it means that I get about the same amount of milk (still not much) in 1/97th of the time, give or take.

This new pumping procedure came with lowered (or maybe just changed) expectations, again, on my part.  Even if I only get half an ounce and Beck nurses the rest (the milk is there, it just doesn't want to come out for the pump), we try again in a few hours and say We'll Take It! and then Beck eats more solid foods on work days when we are apart.  It is what it is, and there have been so many women who are very encouraging of what we're doing.  It's not perfect and there's such a part of me that wishes I had a freezer full of milk, but that isn't what happened for us, so I'll take what I can get and let the rest of the yucky feelings live on the back burner where they belong.

And that's how we do it.  We do our best, adjust when things aren't working, take what we can get, and then move on - with everything, really, in our lives.  The good stuff is so much better than everything else, and when I find myself dwelling on the things that are hard or disappointing about Beck I just need to look at her smile (or laugh at that pout, because seriously, hush) and remember that it is fine.  People with second kids (thank you, Amanda!) especially have to remind me of that, that we of course have good intentions and expectations but even when the best laid plans fall to pieces we're still doing an ok job and the babies will be fine, great even.

Speaking of helpful advice, my friend Eleanor told me the other day that some women have a second round of ppd/hormone loss when they wean their babies, and pointed to some invisible zits as proof (you looked awesome, El!), which could explain why the Olympic commercials really got to me this time.  Or maybe I'm just a sap.

PS Beck went to sleep after about the 3rd paragraph and is still down.  Whoop!