It's raining here, and is supposed to rain until Sunday, which is of course awesome for people who like to take pictures of their food in the sunlight. 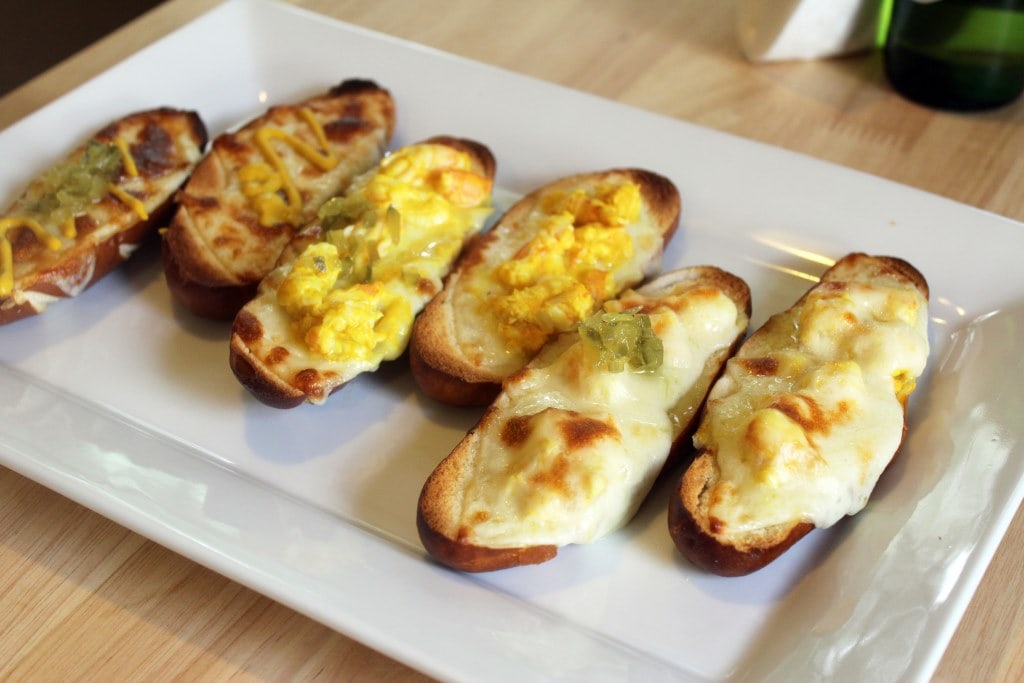 Oh well.  A weekend off I guess!

This little gem was inspired by my sister Emily.  Sometimes I make her text with me at night about food, and she says something like "everyone likes pretzels and shrimp," so I make a crostini with pretzel bread topped with shrimp.

Seriously, the convos go like that.  She loves mustard, so I threw some in as an ode to her.  Make these!  You'll love them, and they're EASY.

The ingredients are super simple.  You'll need pretzel rolls or pretzel baguette, shrimp, provolone, mustard, coarse salt, and sweet relish, which is totally optional.  I find that the salt from the mustard is offset REALLY well by the relish, but if you hate sweet stuff with salty stuff just leave it out.  I won't tell!

First, preheat your broiler and slice the pretzel rolls in half. 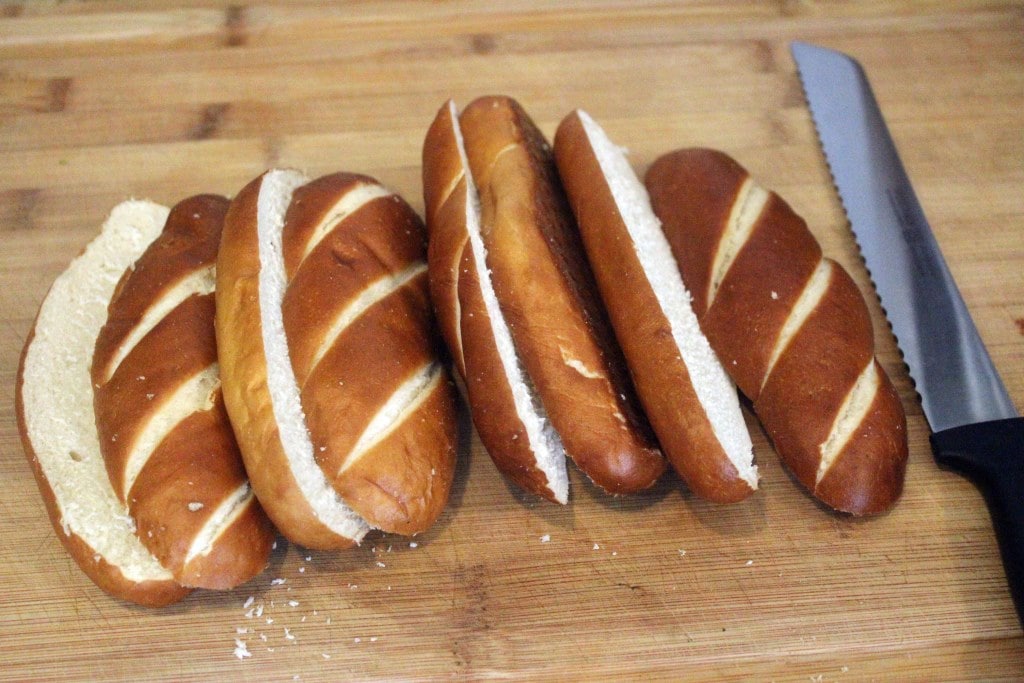 Then, lay them cut side up and broil them for a minute or two.  We're looking for them to dry out and get sliiiightly crunchy, but not brown. 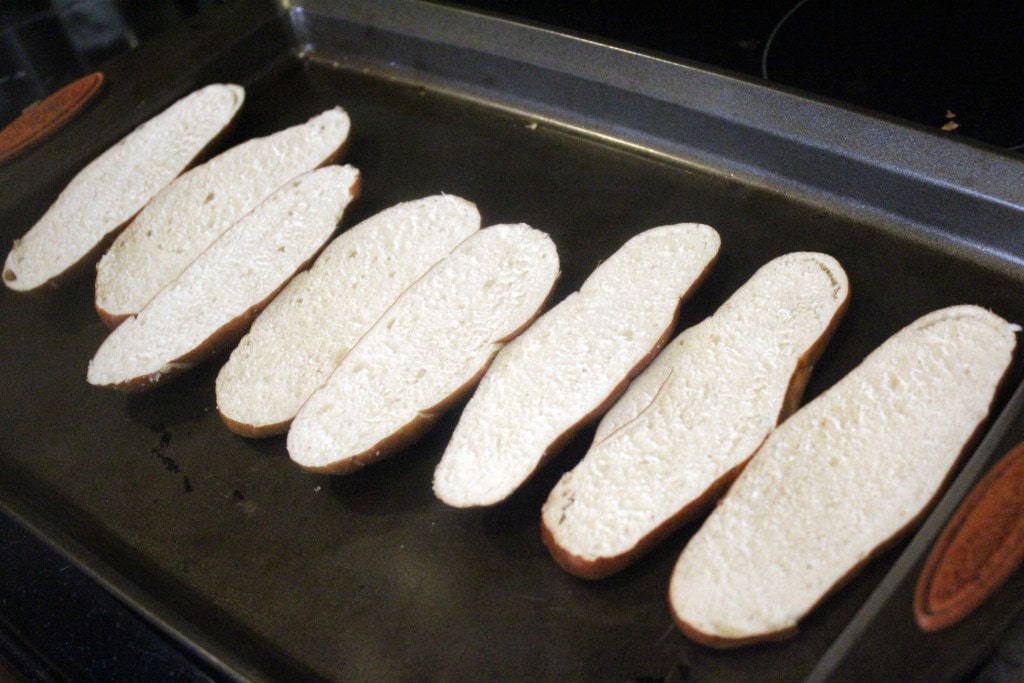 Then, flip the rolls and repeat the broiling on the other side! 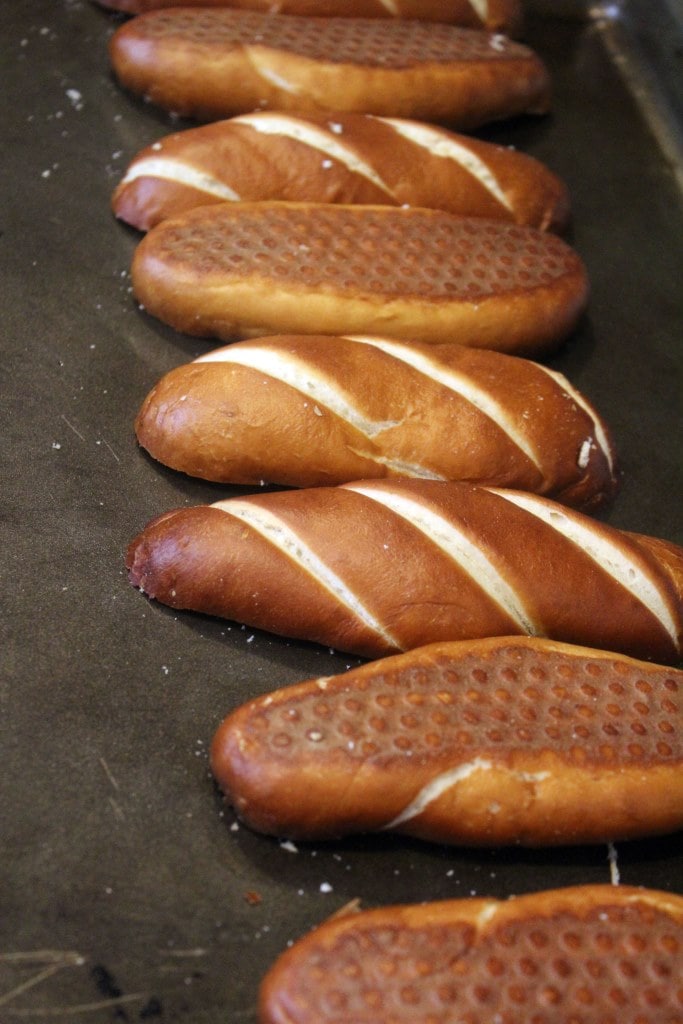 While the rolls are initially broiling, chop the shrimp and remove the tails/shells. 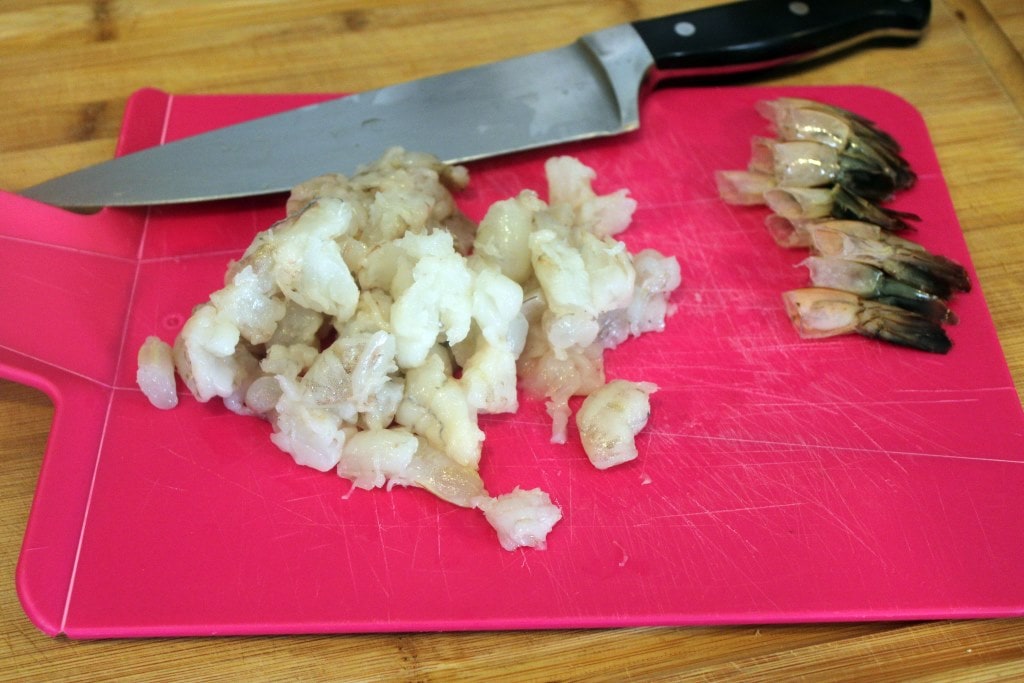 Then, add the shrimp to a bowl and squirt in some mustard. 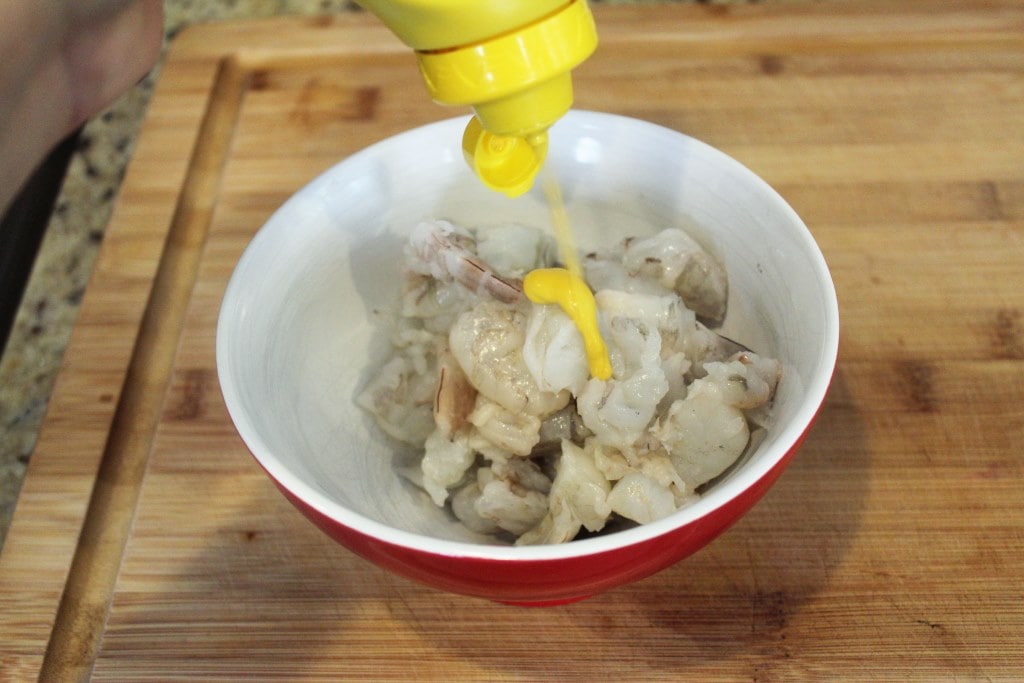 Mix the shrimp and mustard together. 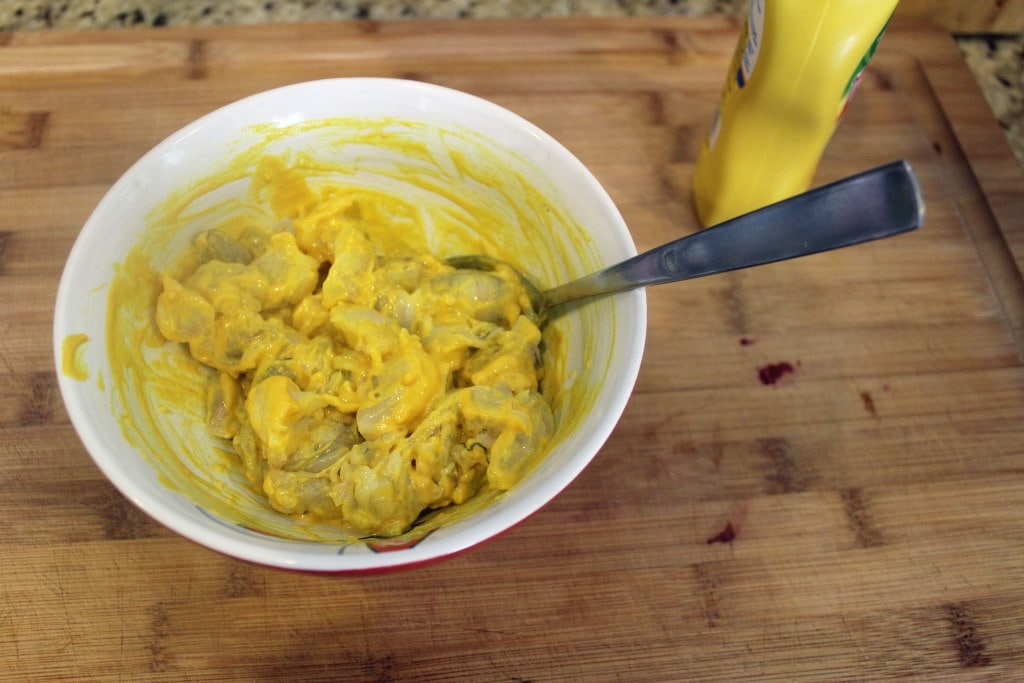 The only other prep we have is to cut the cheese into fourths so it fits a bit better on the small bread. 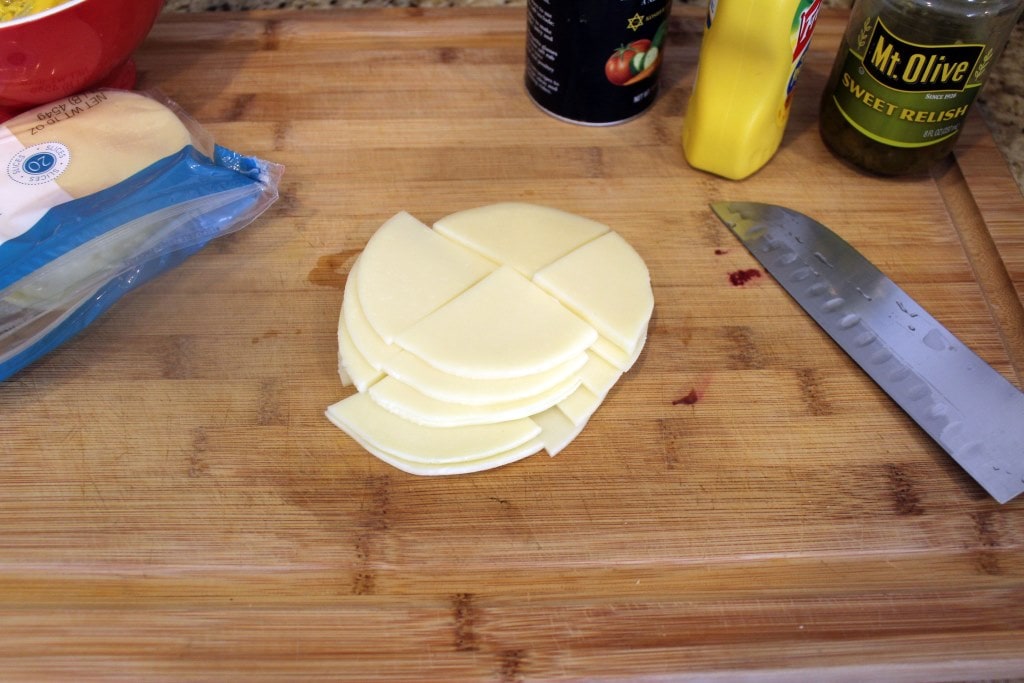 Now, once the bread has been lightly toasted on both sides, we're ready to assemble!  There are two methods for that.  You could lay cheese on the bread.... 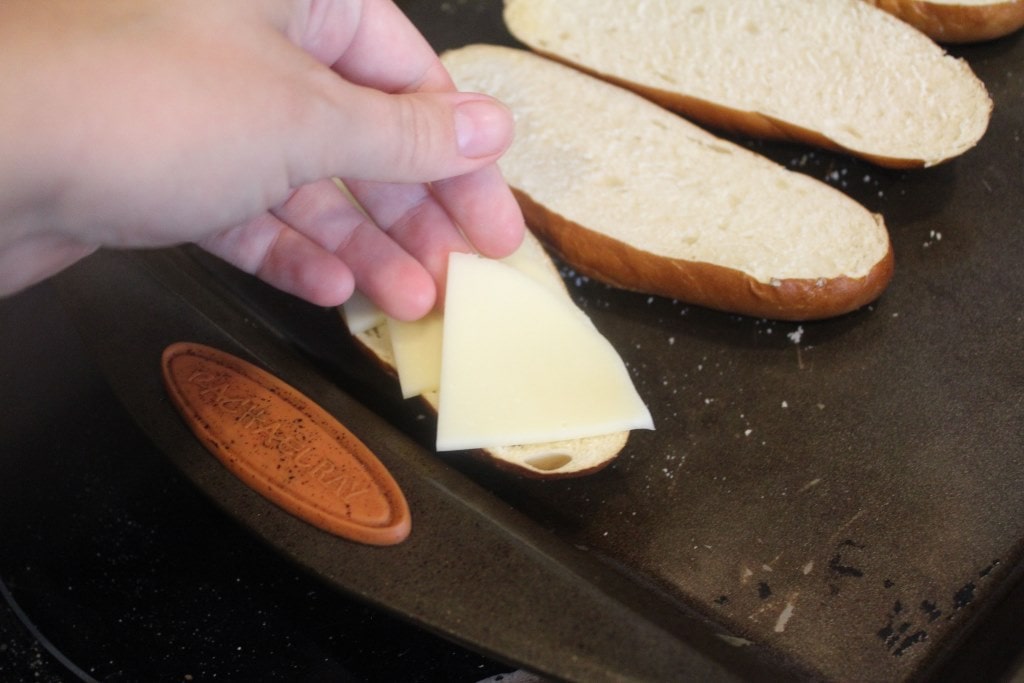 ...then top the bread with a small bit of the shrimp mixture. 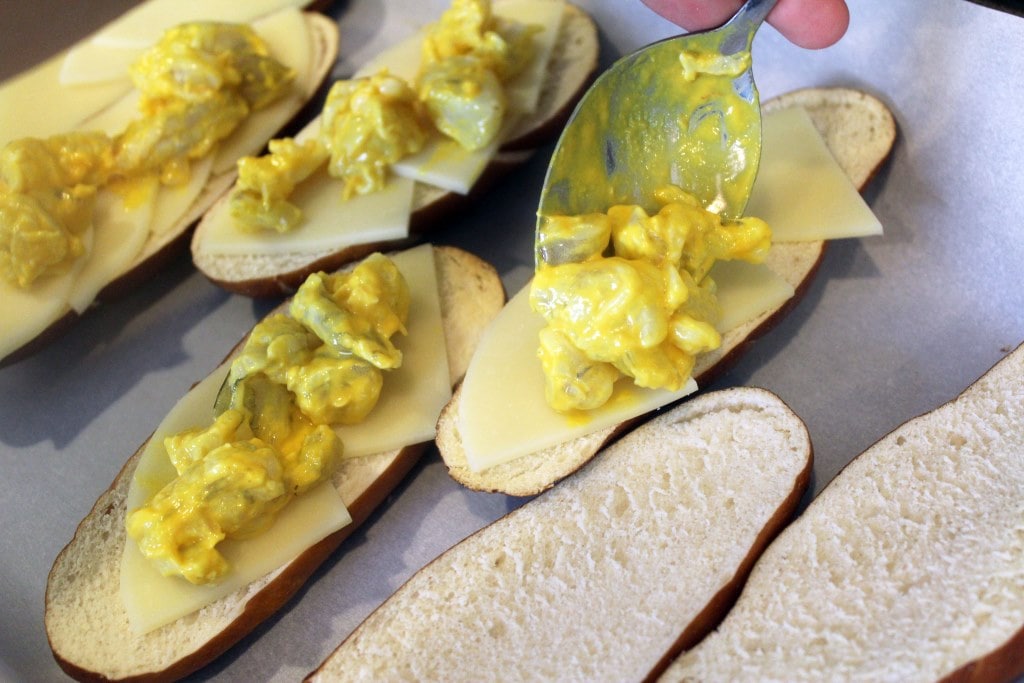 Or, you could reverse it!  Shrimp, then cheese. 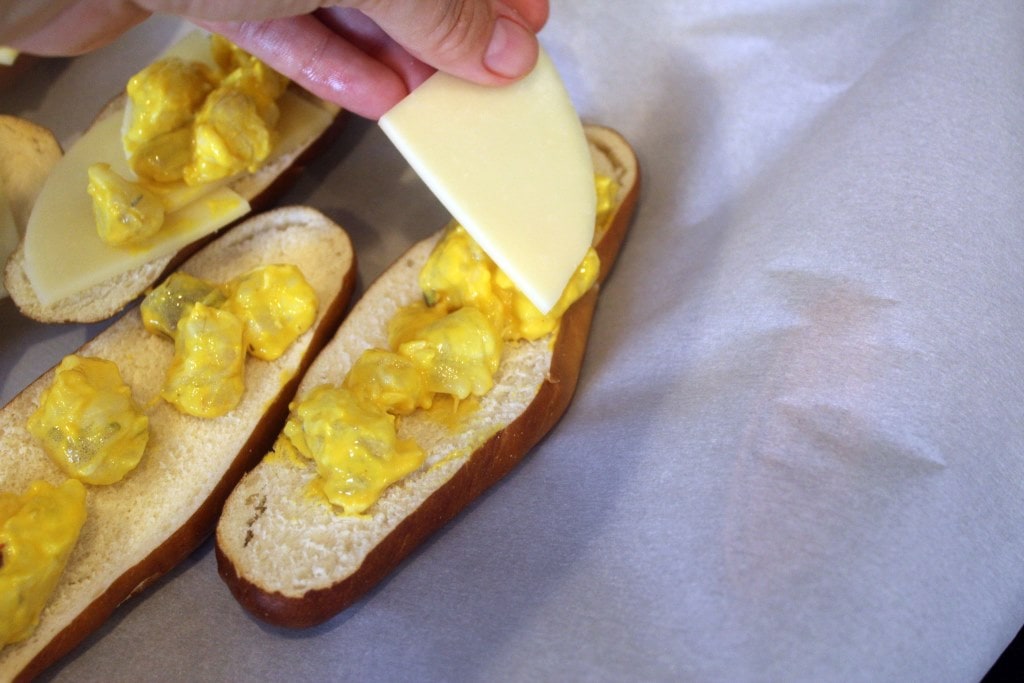 I did a few of each, and some with just cheese for any non-shrimp eaters. 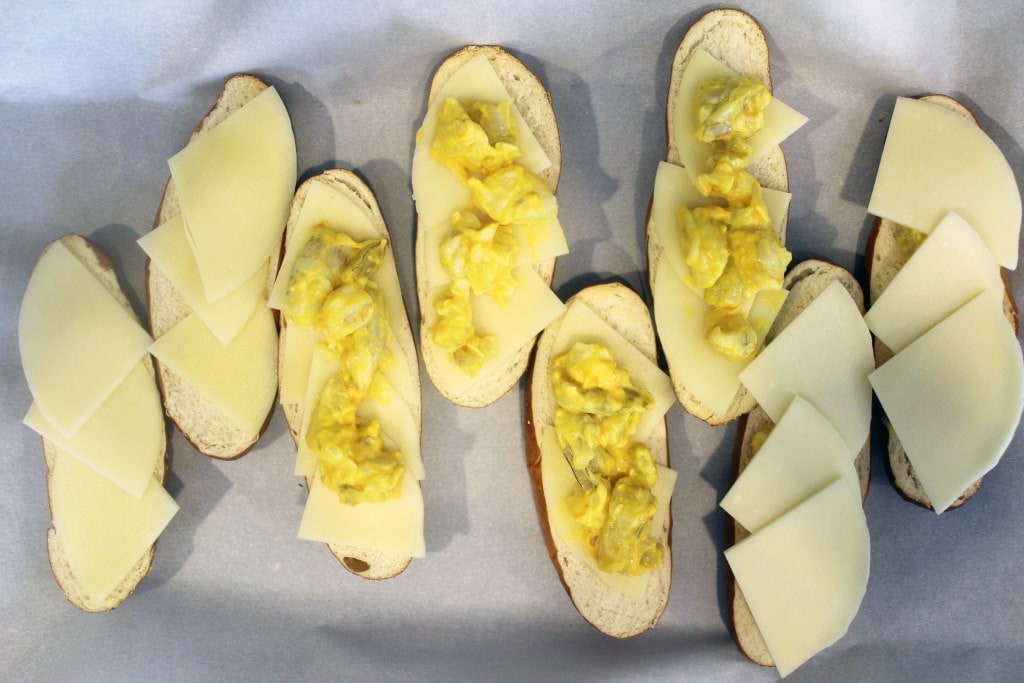 Now, this can all be done well in advance.  When you're ready to serve, just broil for 5 more minutes or so until the cheese is melted and bubbly and the shrimp is cooked through. 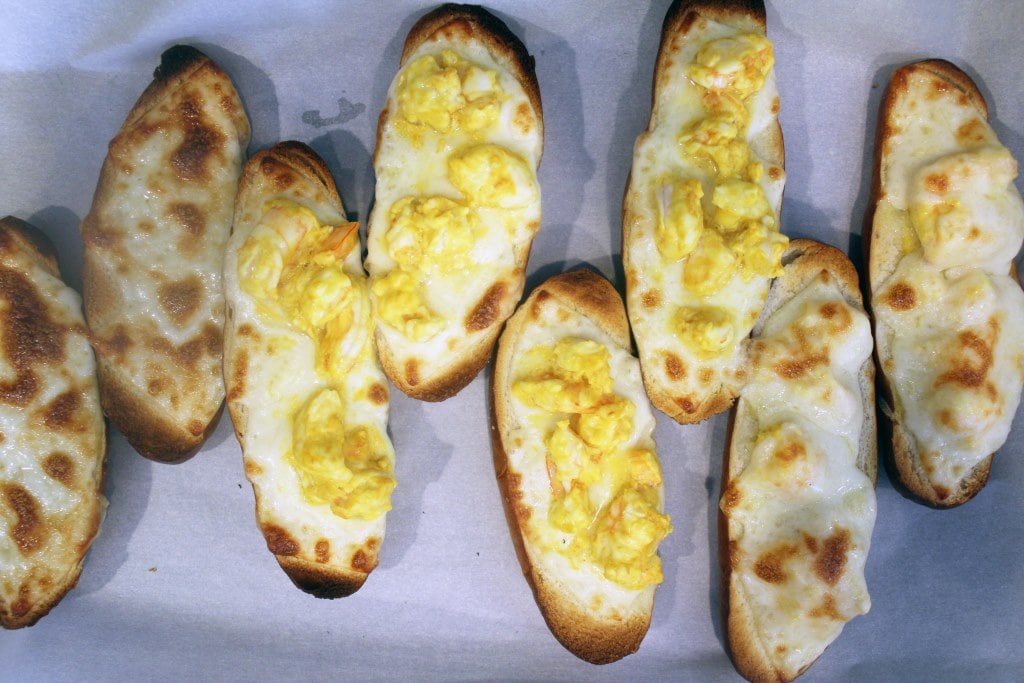 YUM!  These are the just plain kind. 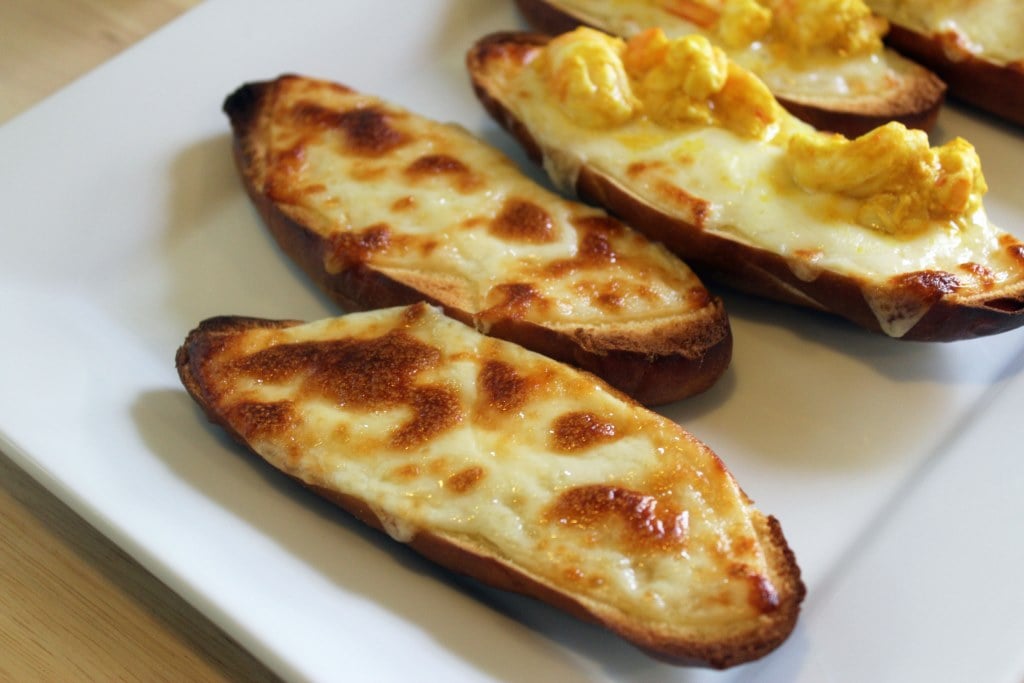 And this is the kind with shrimp on top. 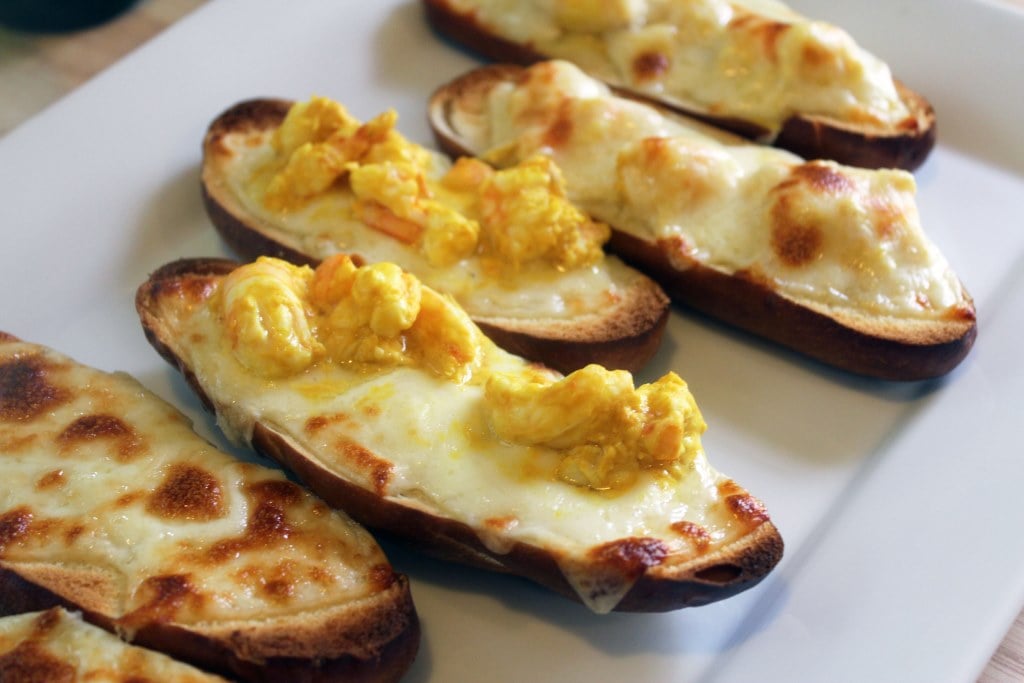 And these are shrimp topped with cheese! 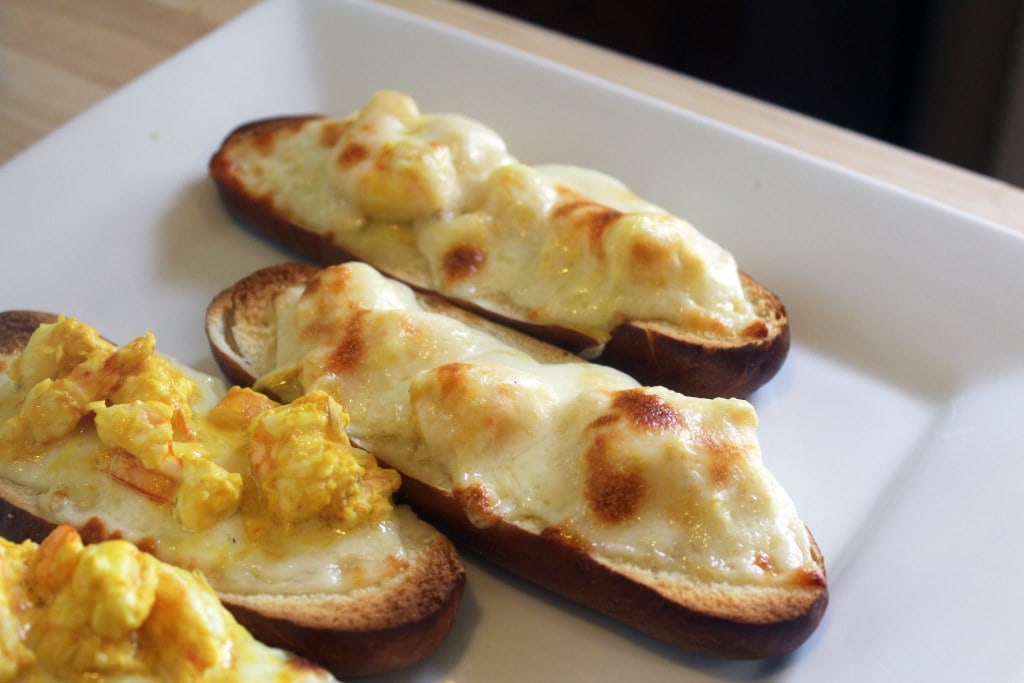 To serve, just sprinkle these lightly with salt, then drizzle with extra mustard or relish (or both!) as you see fit. 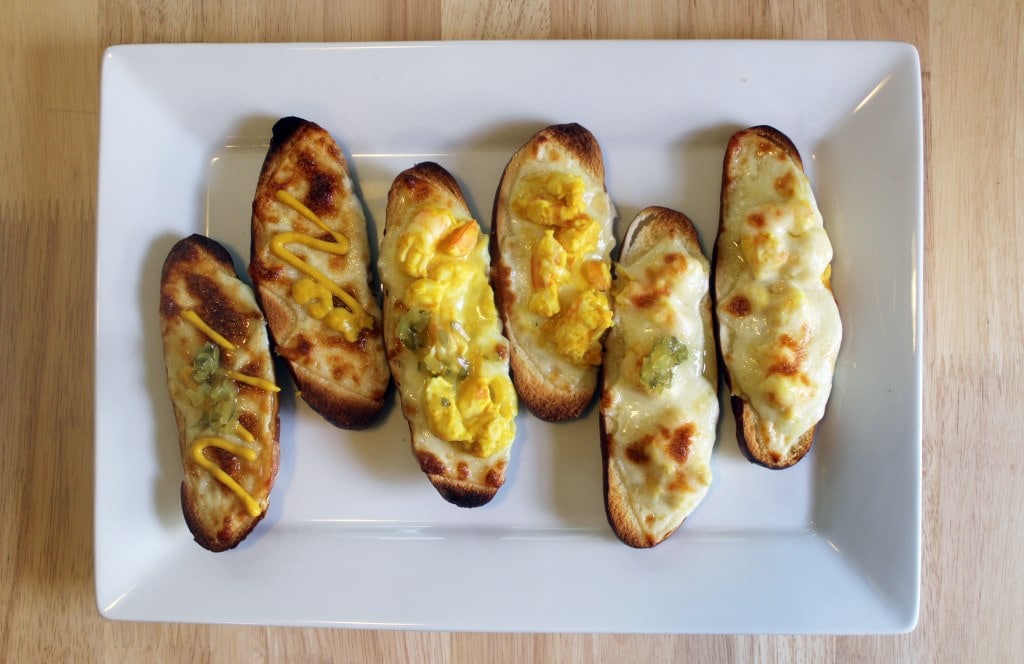 I did a combo of toppings so that folks could choose what they liked.  In the end, I think I like the shrimp version topped with cheese - I found that the shrimp didn't dry out as easily under the broiler, but they're really pretty both ways!

This is SUCH  fun, easy appetizer, and who doesn't like pretzels and mustard?  No one, is your answer. 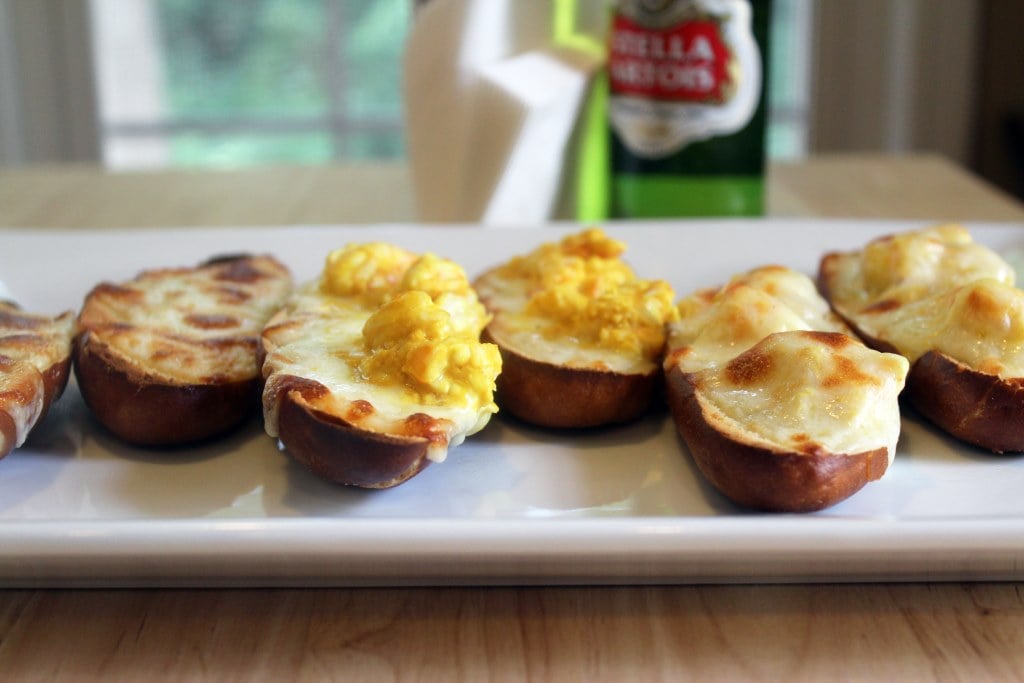 Enjoy these, and have a fabulous (if rainy) weekend!