Ok so, wait for another edition of Lindsay Talks About Parenting As She Lives It For The First Time And Acts Like An Expert. 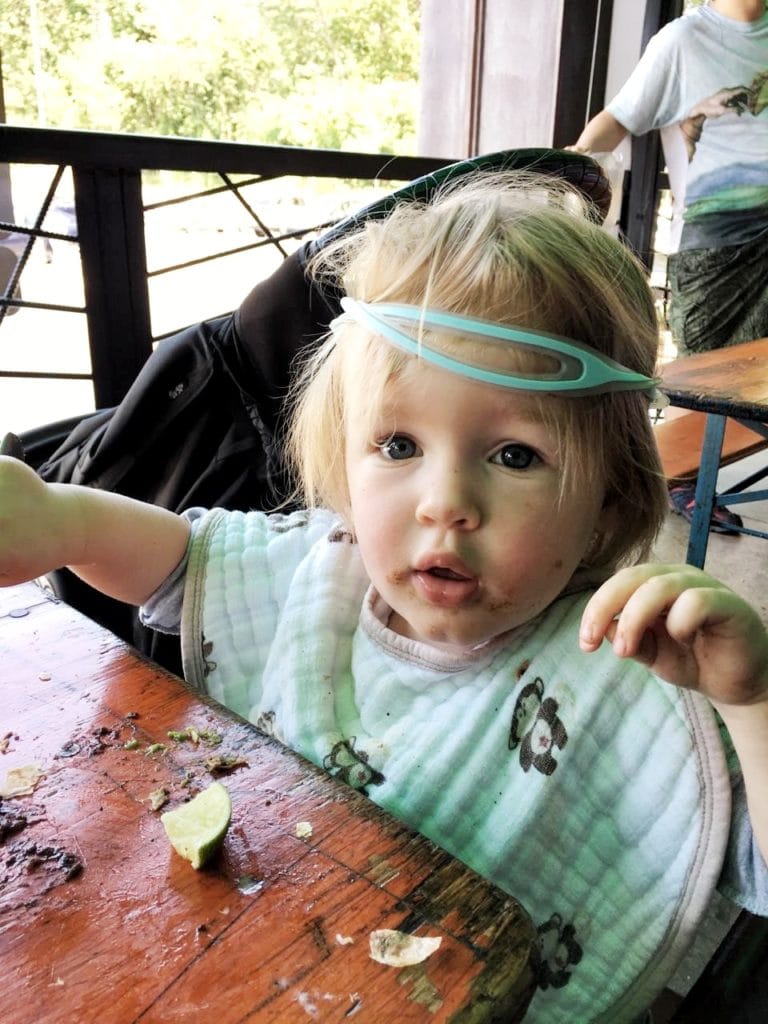 Or at least that's what I assume people think when they read anything I write, ever. It's cool, though, I'm not trying to be an expert. I'm trying to share stories so that people get a version of parenting or living or cooking or toddlering, and then they can maybe use it for information later. A sort of "one person does things this way," if you will.

Beck, for her part, does things HER way when it comes to eating. In the picture above, for example, she is at our favorite taco place eating black beans and lime wedges while wearing goggles backwards because otherwise it's so hard to see. All three of those things were really important in that moment for the enjoyment of the meal, so fine.

I find toddler eating to be equal parts fascinating, disgusting, hilarious, adorable, and frustrating. Some days getting Beck to eat anything at all tests everything I know about patience, nutrition, and behavior management, three things that I do have some book-learnin' on. We are slowly and cautiously easing into "this is what we are eating tonight" territory, and it's HARD. I think one of the reasons parents have so much trouble with this is that when babies are born the utmost fixation is offered to how much the baby is eating and gaining, and then all of a sudden a year and a half later (for most kids) it somehow doesn't matter. Couple that with, you know, wanting your kid to be happy and satisfied in all things, and you see how quickly the "they'll eat vegetables first" mantra goes flying out the window.

In addition to not needing to worry about a baby's weight anymore, we are now also dealing with kids who are learning about manipulation, cause and effect, and just how strongly most people dislike tantrums (another thing that I 100% get giving into because OMG THE NOISE). Now, I am generally pretty stoic in the face of tantrums and hunger strikes, but it doesn't mean for one minute that I'm not dying on the inside and considering writing a blog post about why Ritz crackers are basically a balanced meal. It can be maddening, and also hilarious to look at how much we care, when we acknowledge the fact that these tiny humans have survival instincts and will not, in fact, starve.

In Beck's case, we have let her skip meals more often recently because after a last illness and teething we got suuuuuuper lax about what we eat when. I'm not all about food as punishment or anything like that because I want Beck to have a healthy relationship with food. I also want her to eat vegetables, and LOOK, if I knew nothing about nutrition I'd fully eat white carbs all the time doused in cheese and guzzled down with Diet Coke at lunch and wine at dinner. And I definitely do those things. But I also eat vegetables, prepared in ways that I enjoy, because I think it's important to balance the white carbs with, well, anything.

One thing that I know to be true (you know this too, don't worry), is that kids respond well to consistency, and they do not respond well to being yelled at. Duh. With that in mind, and a few other methods, here are some of our strategies for dealing with Beck's ever-fluctuating eating patterns.

Two things that we are battling with right now is high chair quitting and variety of foods that Beck eats. She's recently decided that the high chair is NOT for her, especially at restaurants, but I'm not quiiiiite sure we're ready to give that up yet, and I'd love your thoughts and stories on transitioning from a high chair to booster or whatever else. Variety of foods is all me, we have a pretty balanced arsenal of things that Beck will eat, so I make them over and over and am not great at sharing new foods with her because she throws it and I get annoyed at waste, which is not the best at all. I'm also working on a list of toddler-friendly non-recipes that I'll share soon, and I'd love any favorites you can pass on to add to the list!

In conclusion, Beck had bacon ONE time and then the next morning when we asked her if she wanted oatmeal or avocado for breakfast, she said, BACON! Thumbs up.