We have a lot going on today. 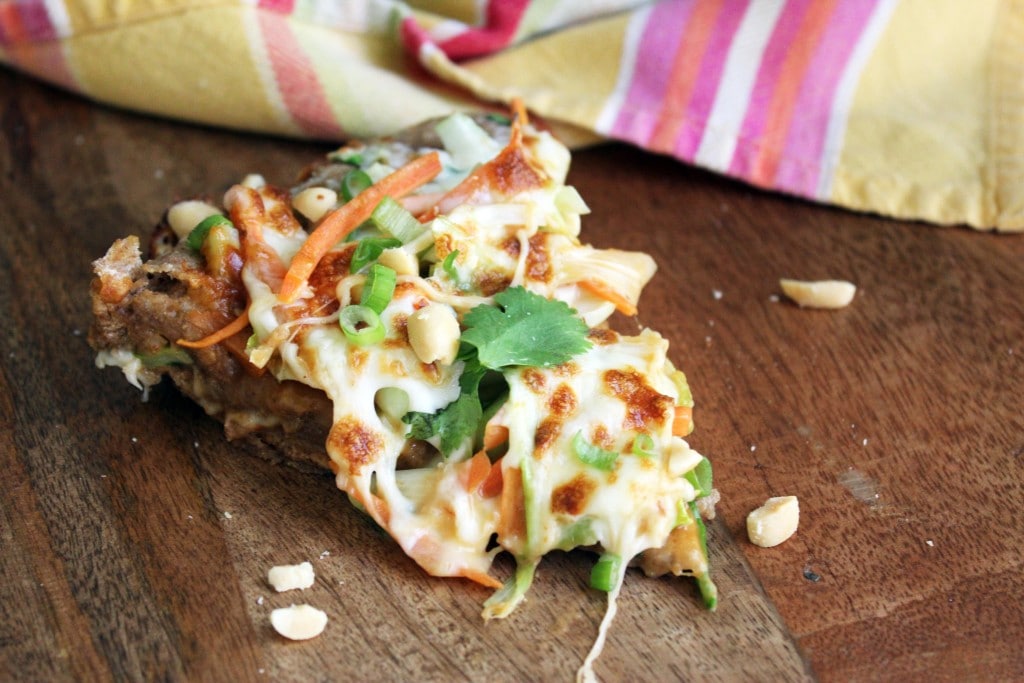 First, we're learning a new method that involves pizza cooking in 5 minutes FLAT.  Start to finish.  Then, we have Thai Pizza inspired by Yardhouse which I just love so much.  AND, we have a ton of veggies on this pizza which basically makes it a health food.  The skillet method of pizza-making has been around for years, and I was inspired by two bloggers that I read every. single. day.  Jess and Bev, I want to be you guys.  Or your friend.  There.  I said it.

We are going to waste very little time on chatting, mainly because once you realize that instead of pizza sauce we have spicy peanut sauce you're going to want to skip all that and GET INTO THIS.

I'm making this a vegetarian version, but lots of Thai pizzas include shredded chicken.  Add some if you'd like!  I also contemplated some grilled tofu for more protein, but there is just SO much already happening here that it was really perfect without it.  For the sauce, you'll need peanut butter, sweet chili sauce, sriracha, soy sauce, vinegar (apple cider, white, red wine, rice...whatever), and oyster sauce.  For the pizza you'll need some kind of dough (mine's from Trader Joe's, the whole wheat kind), bok choy or cabbage, a carrot, green onions, lime, mozzarella, cilantro, and peanuts.  Boom.  So Thai. 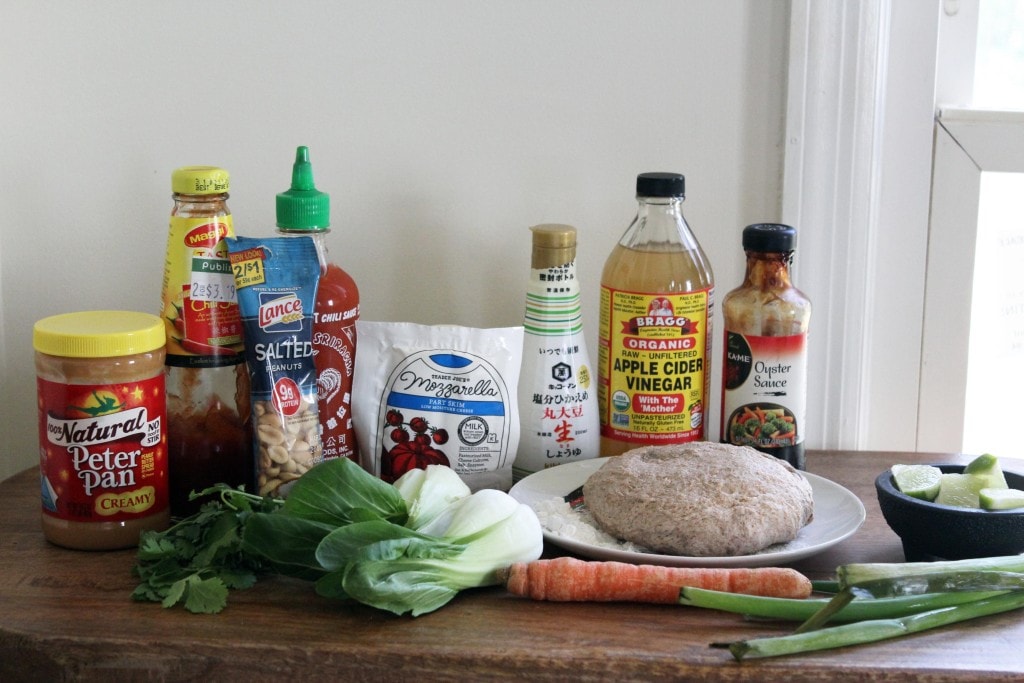 Because the pizza cooks so quickly, we want to prep everything first.  When it's time to cook, you'll need a cast iron skillet REALLY hot and the broiler preheated to high, so go ahead and get that going first.  If the skillet starts to smoke, turn it down just a bit.  My stove has a 1-10 setting for eat and I had mine at 6 for 10 minutes or so.  While that's happening, make the sauce!  Put all the ingredients together in a little dish. 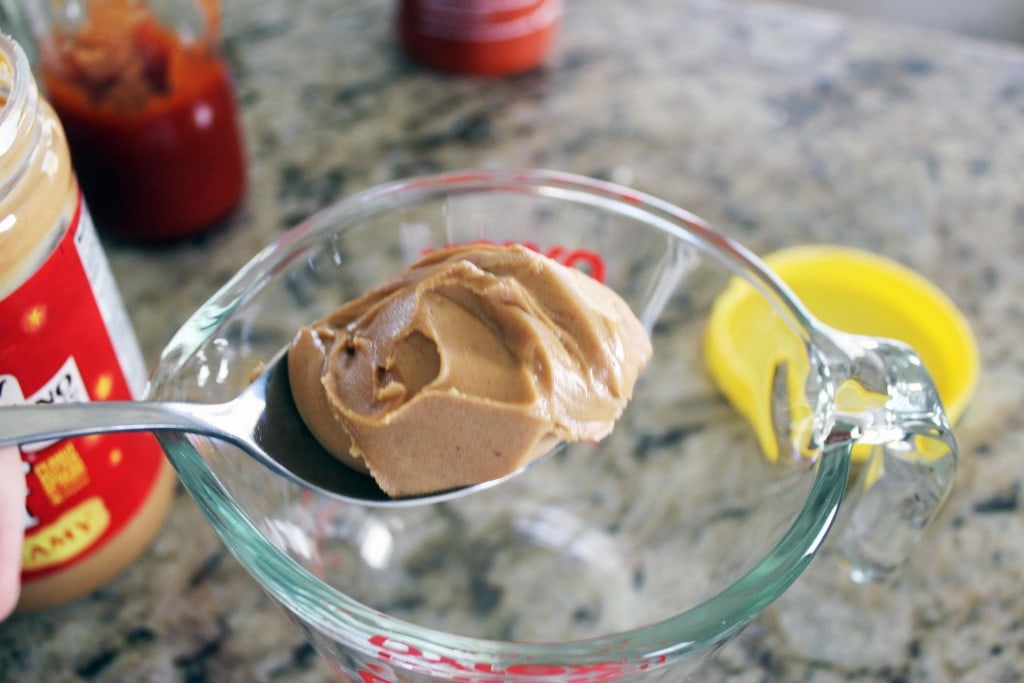 Then, stir.  I used a fork, but a whisk would work great.  Taste the sauce, and add more of whatever you think it needs - peanut butter for creaminess, sriracha for spice, or more vinegar if you like that kind of a bite. 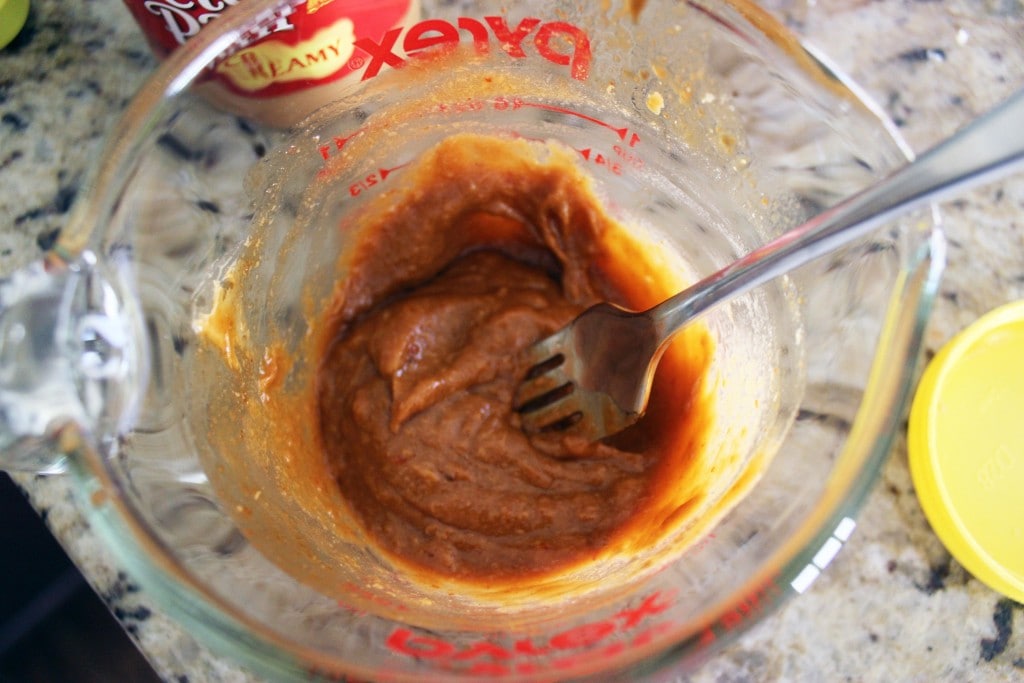 Prep the veggies, too.  For the carrots, I cut it into matchsticks. 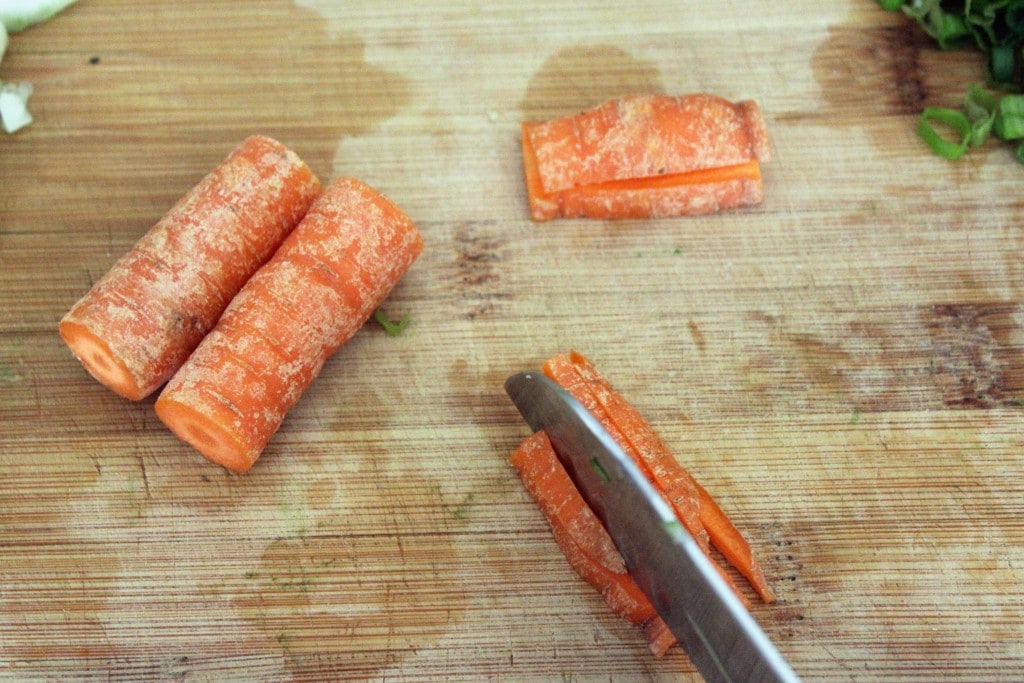 Then I thinly sliced the bok choy, and separated the white parts from the green parts of the onion.  White got cut into strips, green was sliced.  But, you can cut the veggies any way you like!  Just remember to keep everything small since they go onto the pizza raw. 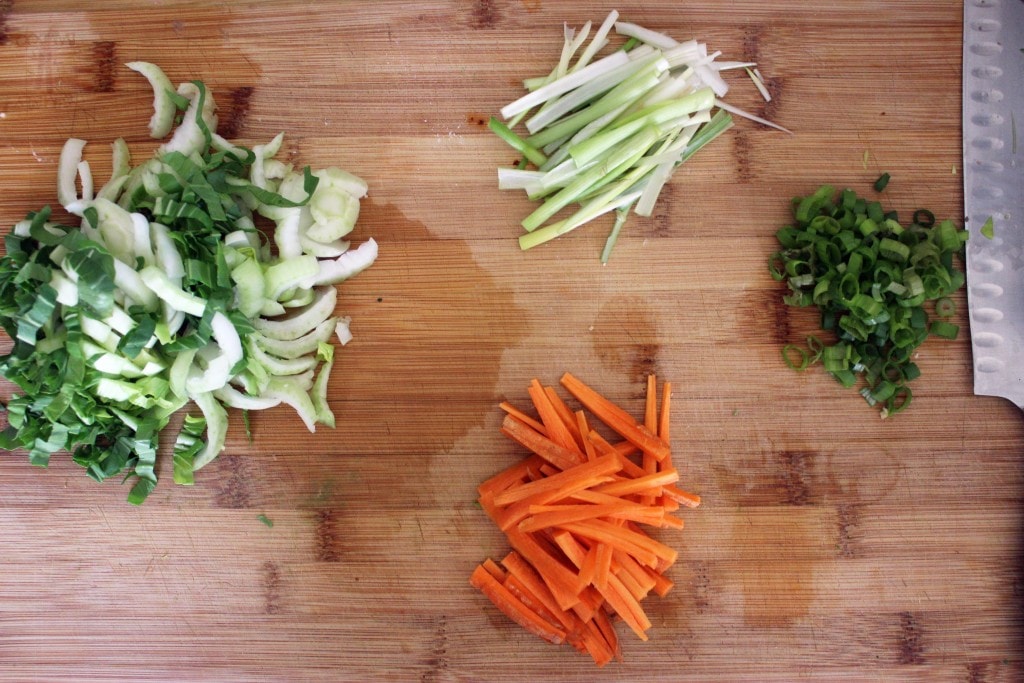 Now we need to grate the cheese. 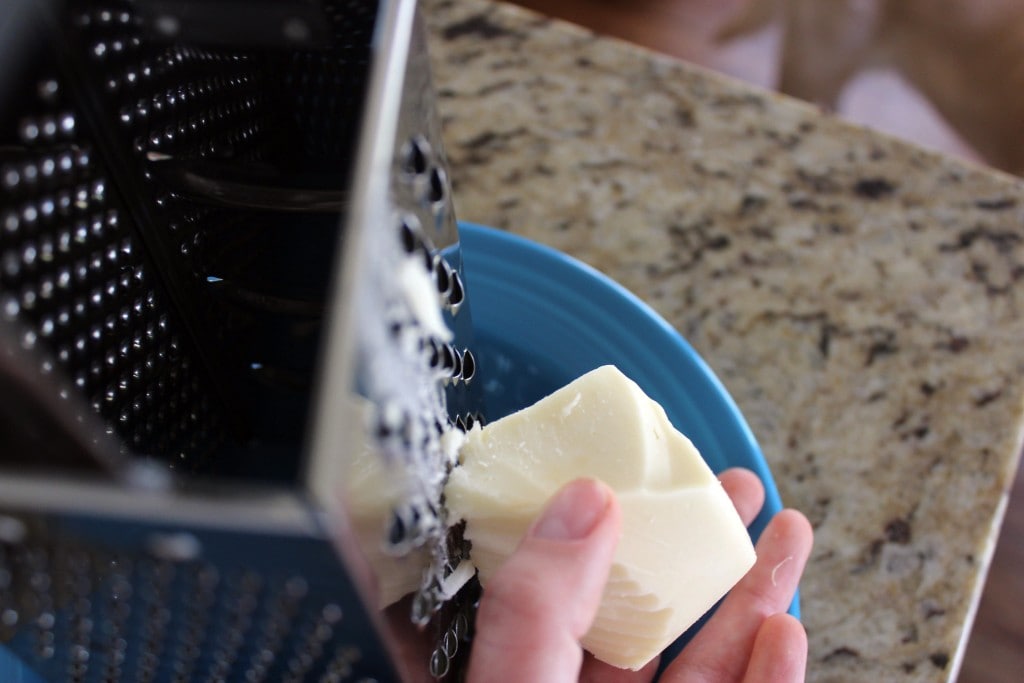 And prep the toppings!  Chopped peanuts, lime wedges, cilantro leaves, and the scallion greens you already separated out. 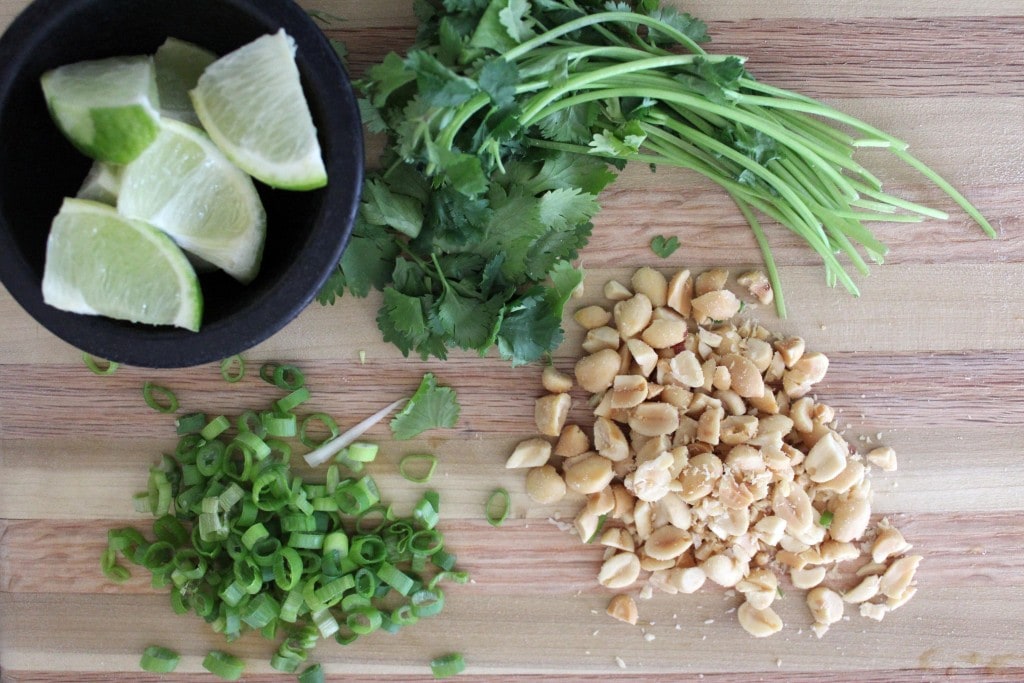 NOW we're ready to build.  Everything should be super duper hot too.  Start by stretching the pizza dough to a round the size of your skillet - don't worry if you get any weird edges, life isn't perfect and neither is pizza dough.  Words to live by, eh? 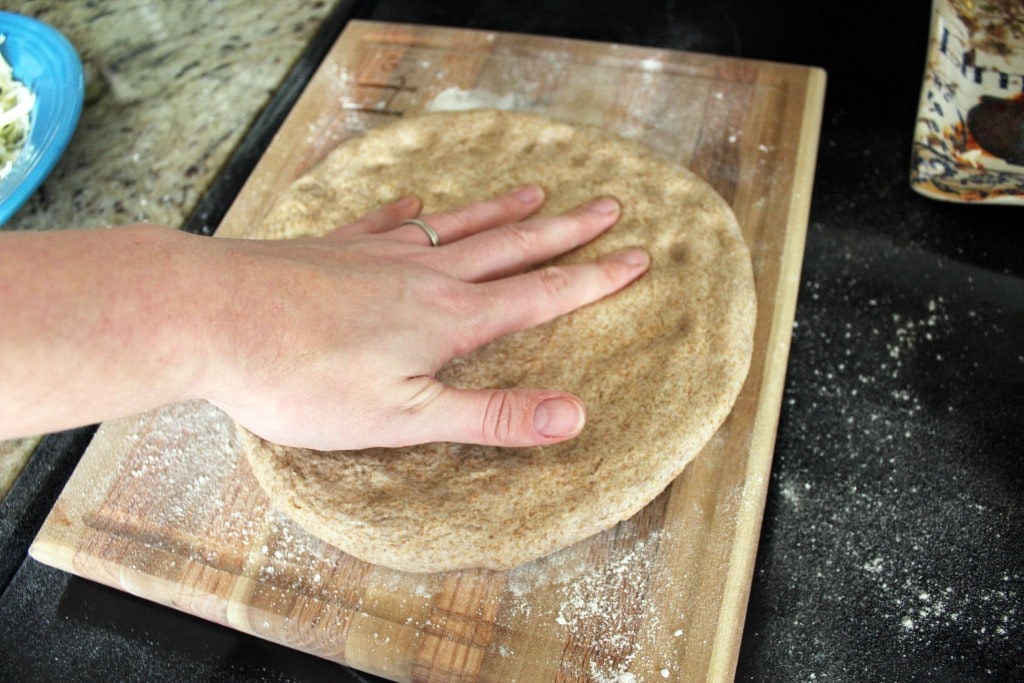 When everything is ready, very carefully slide the pizza dough into the pan. 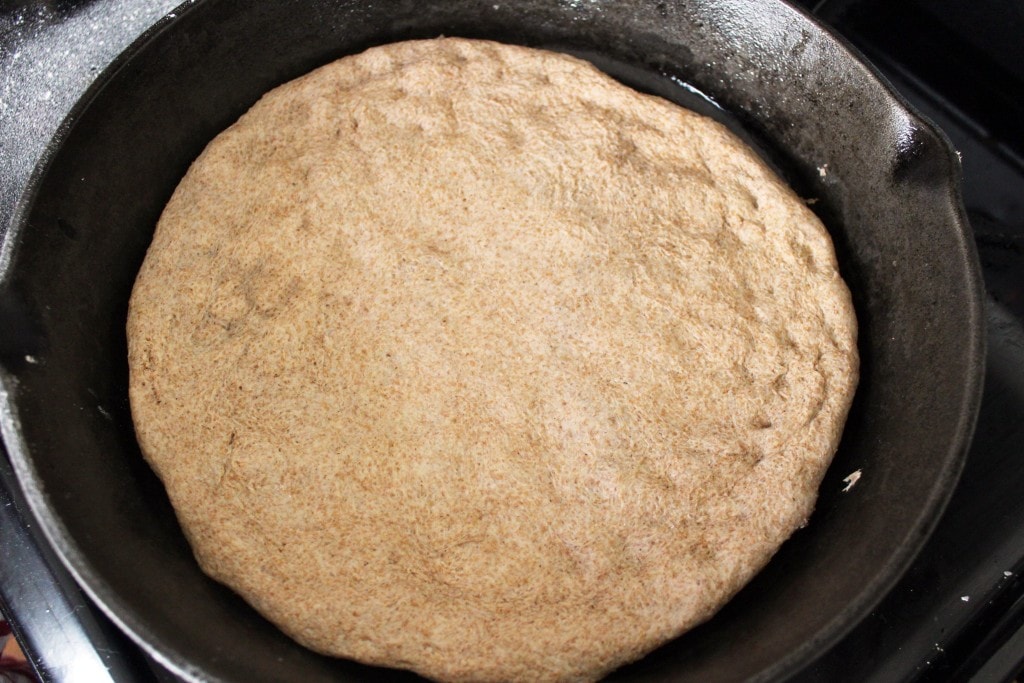 Now, we kind of have to work quickly so the dough doesn't burn on the bottom.  Spread the sauce all over the pizza. 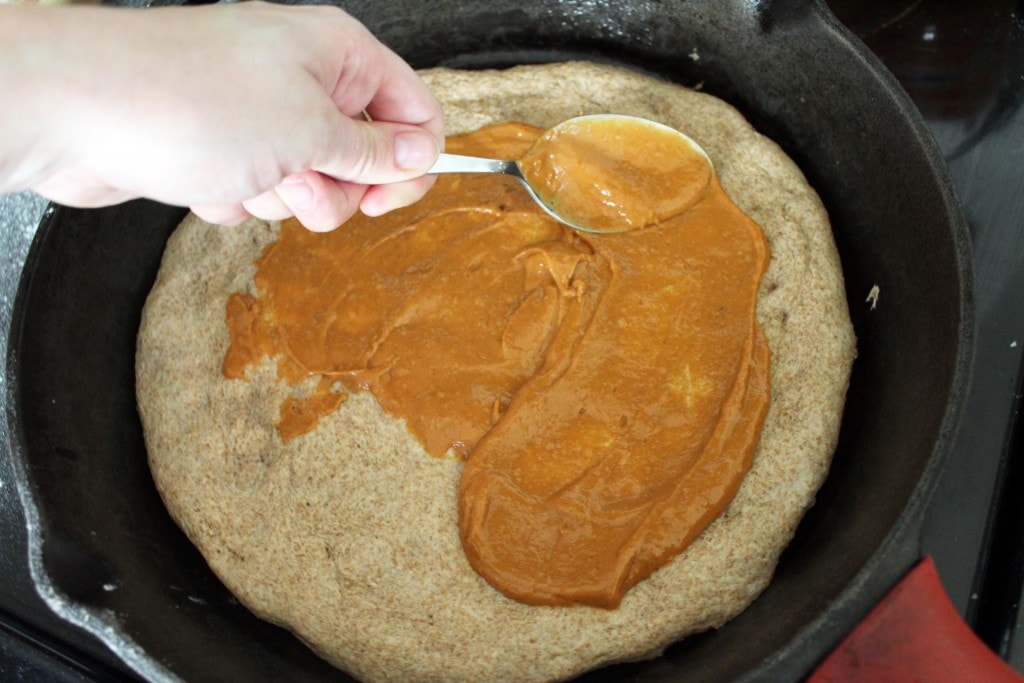 Then sprinkle over the bok choy, carrots, and white parts of the scallions. 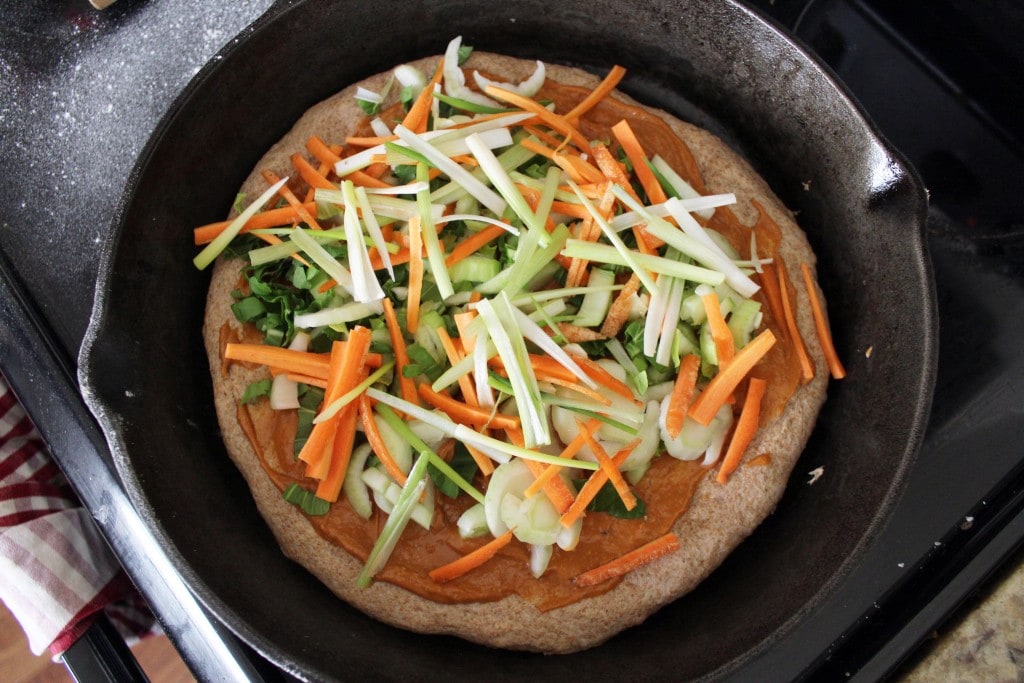 Top the whole mess with cheese. 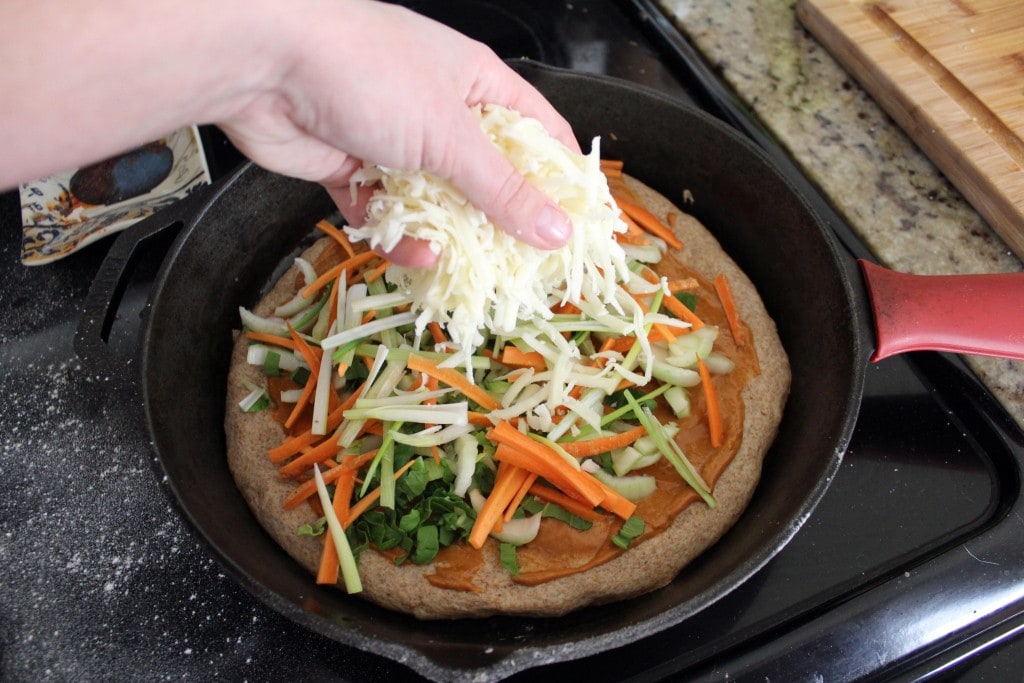 Then we broil!  For 2 or 3 minutes, just until the crust is golden and the cheese is bubbly. 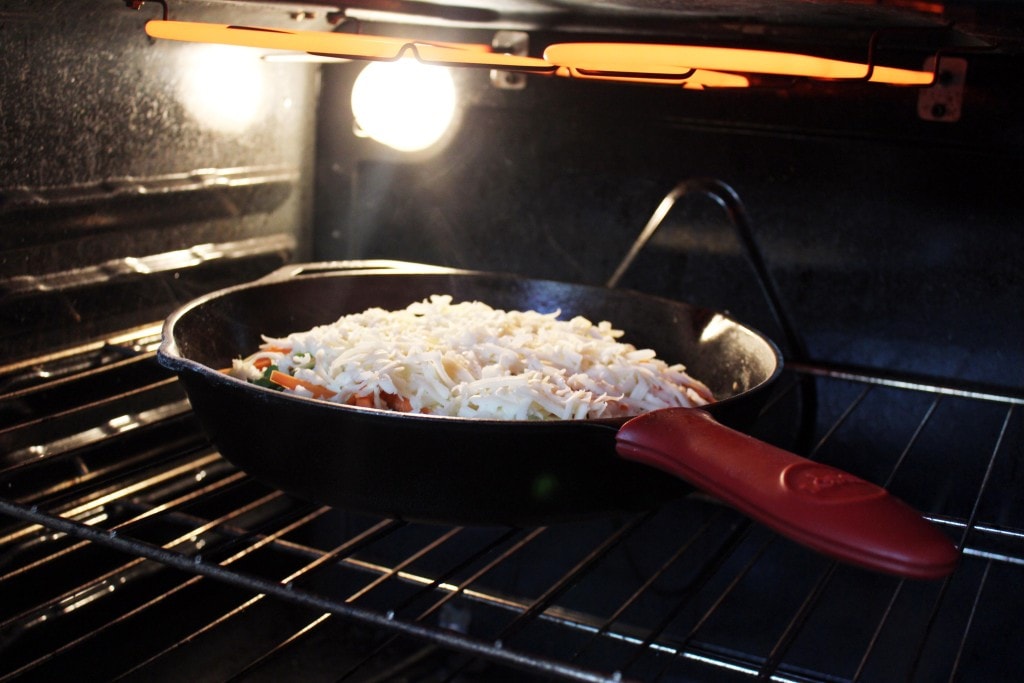 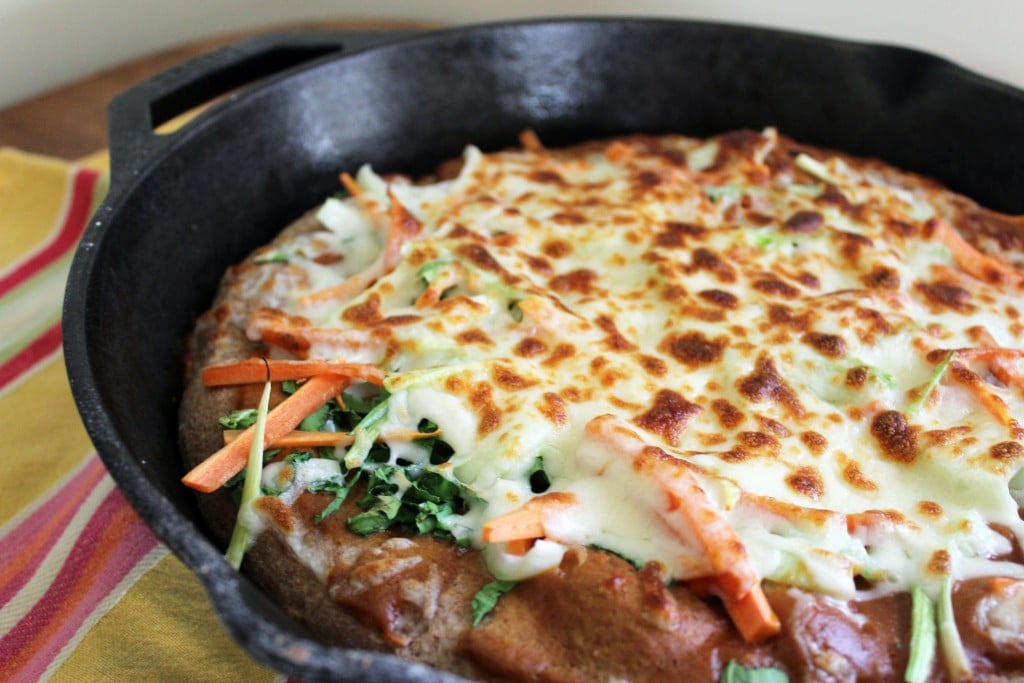 Now, this is so sexy on it's own.  But remember all of those toppings? 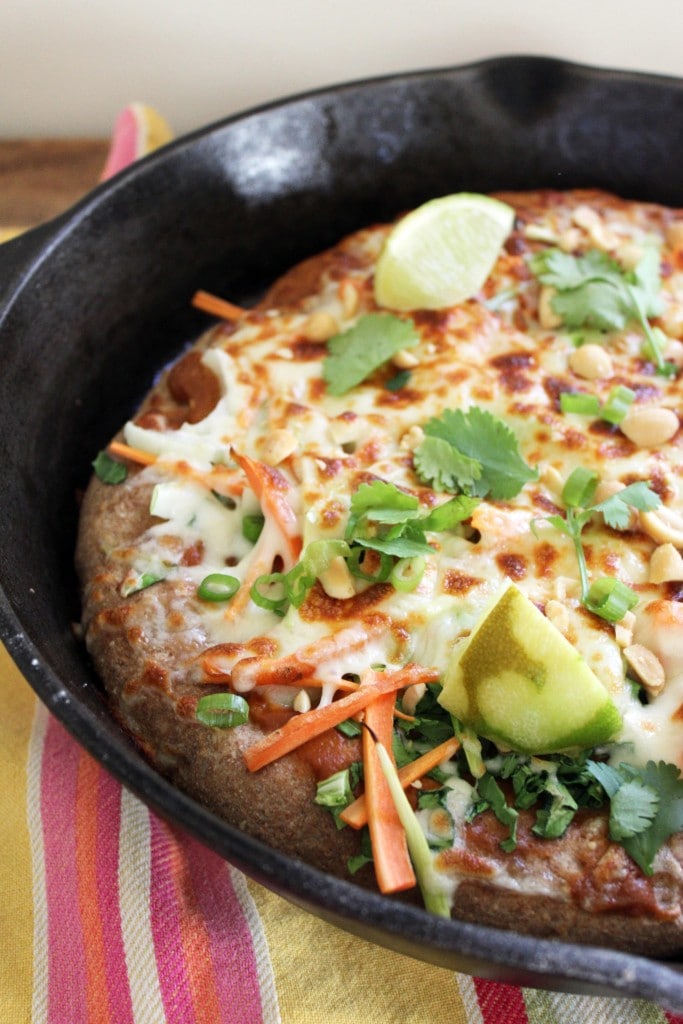 YES YOU DO.  The fresh aspect of Thai-style toppings is one of my favorite things on the planet, and it goes really well with the rich peanut butter and cheese happening here. 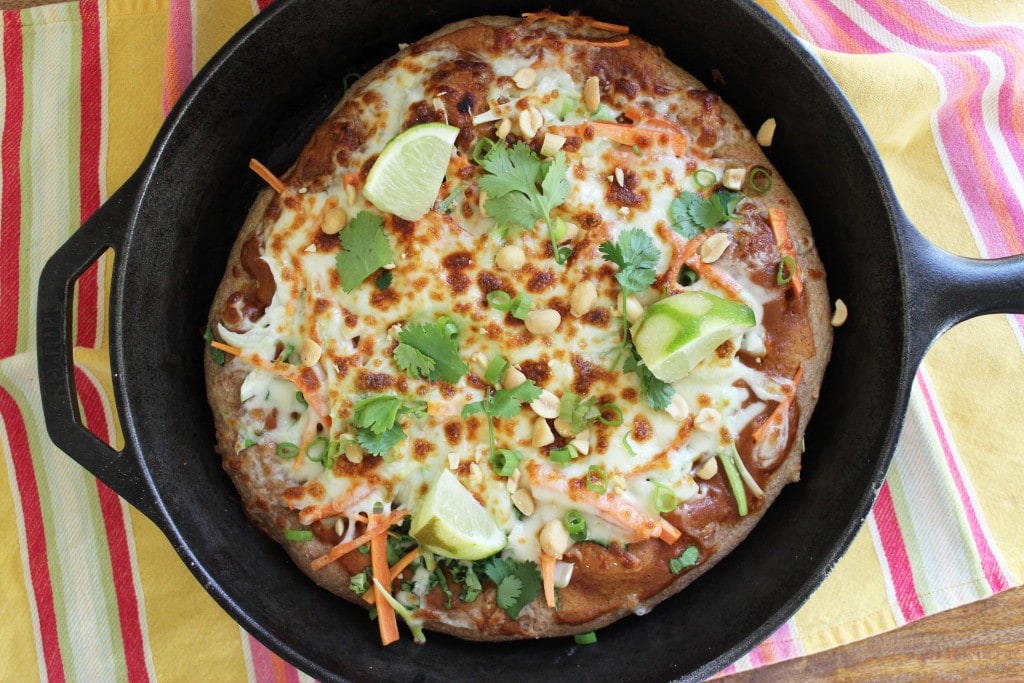 Now, if you feel like sliding this out of the skillet before cutting be my damn guest.  I cut it with a serrated knife right in the skillet to try and not disturb the toppings too much, and it worked great! 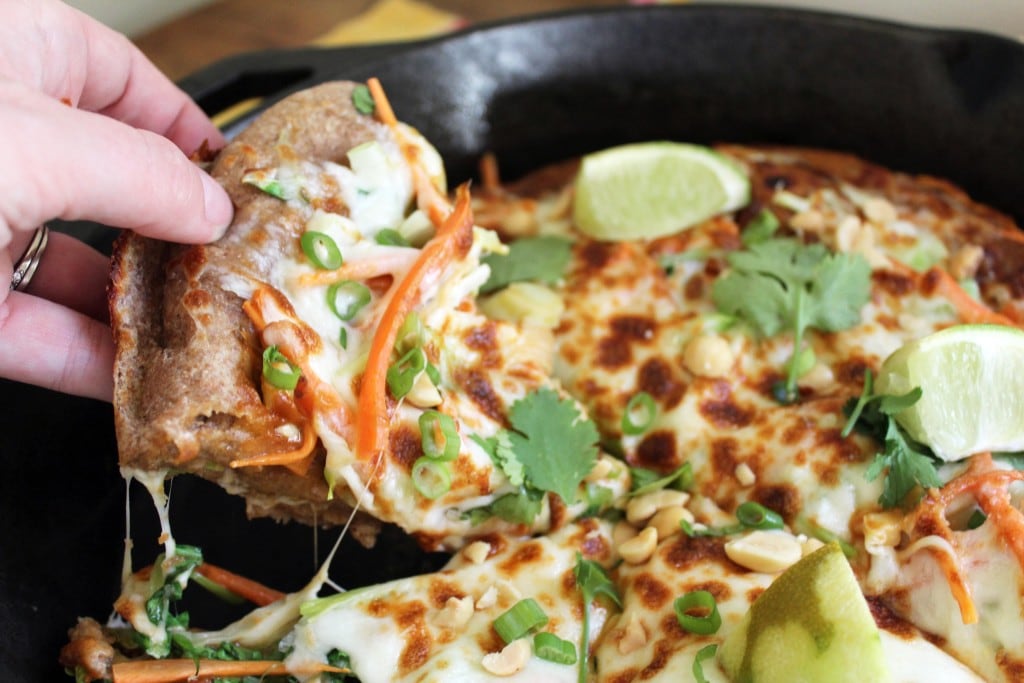 This is amazing.  The skillet method might be my new favorite, but the Thai?  I'm thinking sandwich. 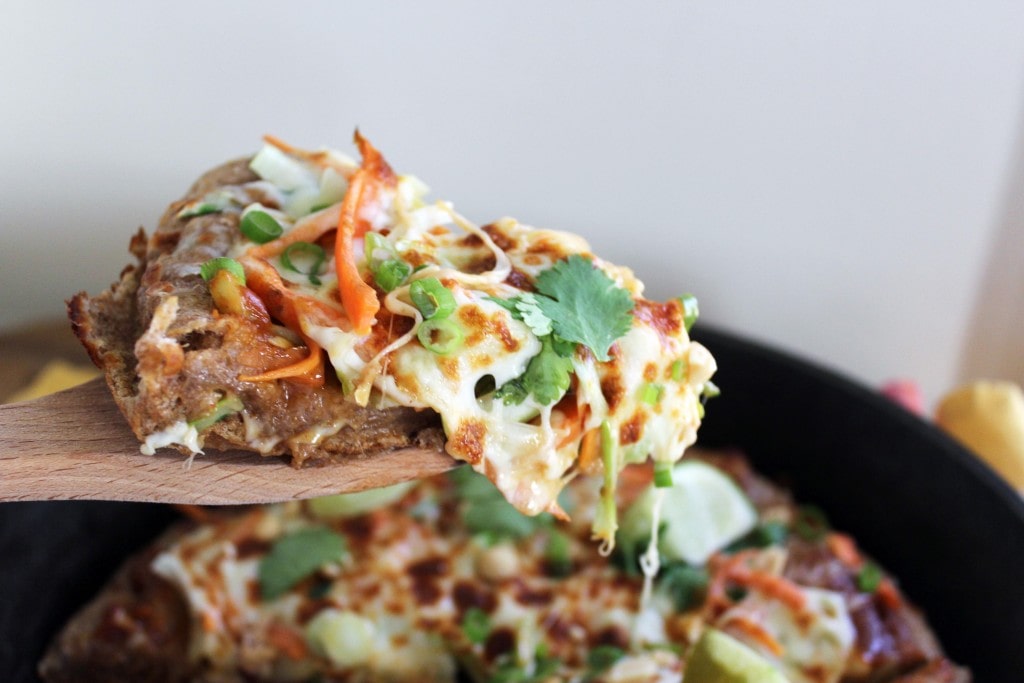 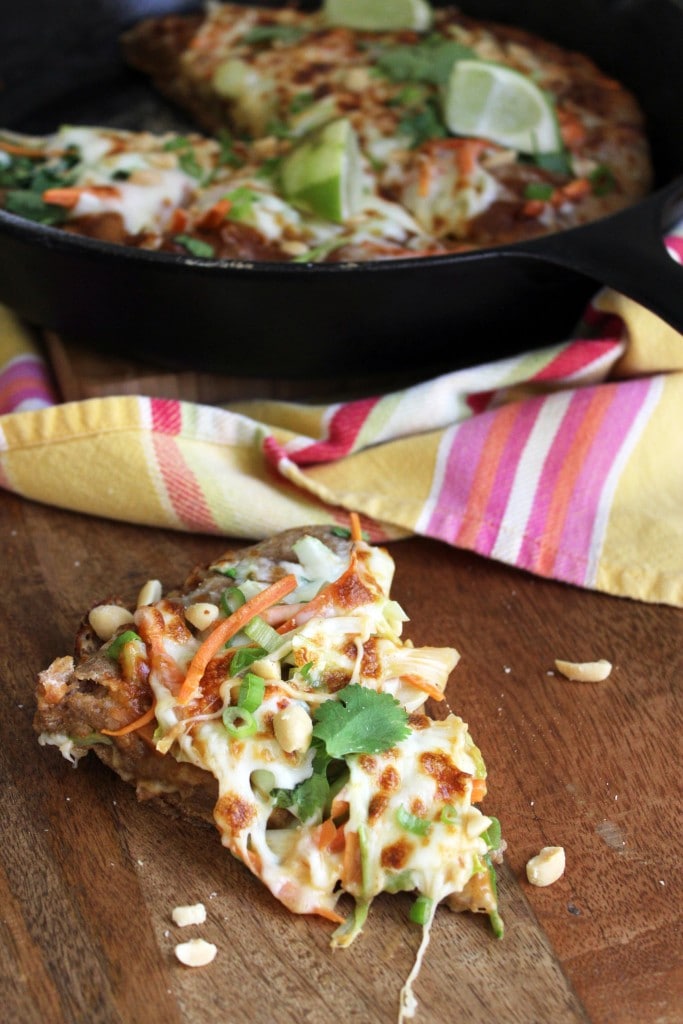