The phrase, “zero to sixty” is usually reserved for the automotive industry.  It typically describes how quickly a certain car can accelerate to sixty miles an hour.  However, on rare occasions it can accurately illustrate how fast a man can move when awakened by his wife saying, “Honey, I’m in labor.  We gotta get up and go.”  I couldn’t have hopped out of bed faster if I had springs mounted on my ass.  Like a bullet from a gun I was propelled into reality at break-neck speed.  “Oh shit!  What can I do?  How are you feeling?  Did your water break?  Oh shit!  What the fuck!?”  All of those questions came racing off my tongue while running in place.  If I were Fred Flinstone, there would have been a plumb of smoke peeling off my feet.  We were off to the races. 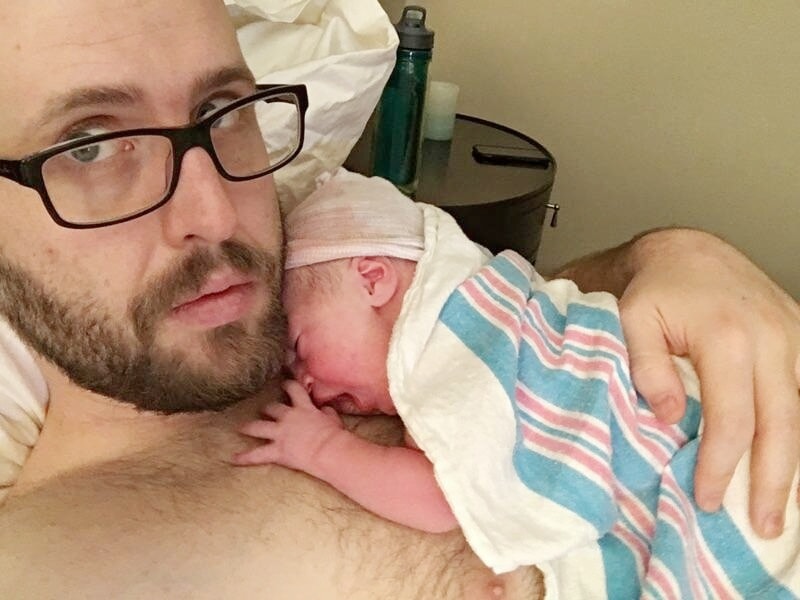 Lindsay’s water broke at 1am.  I was sound asleep and didn’t hear a thing.  So, I’m assuming it wasn’t like that scene in Indian Jones and the Temple of Doom when the water tower was knocked over and flooded those caves.  Upon having her water break, Lindsay entered into a Zen-like managerial mode.  She showered, shaved, braided her hair, composed emails, and organized her entire life on the fly.  I can’t cancel a doctor’s appointment without a five day notice.  She is utterly amazing and inspiring.  After retiling the bathroom and dusting the floorboards, Lindsay’s contractions were severe enough to finally wake me up at 4:30am.  The contractions were forty-five seconds long and coming every two minutes.  This isn’t the “normal” length of contractions, so we thought we had a little bit of time.  Lindsay had already called the midwifery practice and informed them of the impending birth.  While they reassured her that everything was on course, they encouraged her to labor at home for as long as possible.  I was awakened from sleep to endure the “as long as possible” phase of the birth.

While still trying to figure out if I was awake of not, Lindsay barked her first command.  “Push in on my hips.  Here comes another contraction.”  She was leaned over the side of the bed, writhing in pain.  I squeezed her hips like we had learned in birth class, praying that this was false labor.  I wasn’t ready.  I didn’t even have a bag packed.  And that was our cycle.  We would race to getting all of the neglected tasks ready and take contraction breaks in between.  I helped her into the shower, she labored there for 15 mins until the hot water ran out.  I tried to help ease her pain and comfort her the best I could, only to be greeted with a demonic response of, “Don’t touch me!”  You got it boss!  I just work here.  You tell me what to do and it will be done.  I was running around the house trying to take care of the dogs, pack our bags, pack a snack, get our paperwork (which we forgot), and all the while helping Linds work through her contractions.  I wish I could have been an octopus and had 8 arms.

I love being a hero when it’s easy.  Driving a pregnant woman to the hospital is easy and I drove the shit out of that car.  It was like I was daring a cop to pull me over.  Because if I saw blue lights in my rearview, he’d be following me at a high rate of speed all the way to the birthing center.  I figured I could explain it with my hands stuck out the window yelling, “My goddamn wife is in labor man!  Put the gun down!  No, I’m not drunk.”  I ran two red lights and hit sixty mph in a thirty-five zone.  I sped past a group of stupid morning joggers and they flapped and waved their arms in protest like a bunch of hyper active plane landers as I darted by.  I remember laughing at them.  The audacity to think their morning jog was more important than my baby.  Assholes.

We arrived a solid ten minutes before the midwife.  My NASCAR-inspired driving had put us ahead of schedule.  Lindsay had two of her worst contractions in the parking lot while we waited for our midwife.  We walked around the parking lot, squatted through the pains, pushed the hips in, and I kept repeating, “You can do this.  You got this.  This is what you want.”  Meanwhile, I wasn’t believing one goddamn word I was saying.  All I was thinking was, “this baby is about to Jean Claude Van Dam its way out of your vagina and you’ve refused all narcotics.  You’re fucked.”  As Lindsay finished her last parking lot contraction, our midwife pulled into the birthing center.  We hurried inside and into a dimly lit office.  Once up on the exam room table the midwife took no time at all to determine that Lindsay was almost fully dilated.  She was 9cm.  We were rushed downstairs.  Lindsay didn’t even have enough time to put her pants back on.  They just threw a sheet around her like some half-assed toga party erupted in there.  I lagged behind as they ushered Lindsay out the door.  I watched her waddle her way down the hallway towards the elevator, slowly leaking Beck to Earth.  My heart melted.  It was shocking when she woke me up at 4:30am.  It was sobering when life literally starts to hit the floor in front of you.

Lindsay yelled and moaned the entire way to the Blue Ridge Room.  That is the birthing center room we used.  It was my favorite room on the birthing center too.  I paused for a brief moment as we entered the room and gathered what was unfolding in front of me.  Game on.  They immediately started filling up the “birthing tub”(?) as Lindsay said that she might like to visit that option in the near future.  Almost instantaneously, the midwife said, “We’re probably not going to have enough time to fill this tub up and get it up to temperature for you to deliver in the tub.”  This immediately caused me to freak out but I kept that freak out inside, where my feelings live.  The Blue Ridge Room has multiple birthing tools scattered around the room.  There is the useless birthing tub, squatting stool, birth swing, shower, and queen size bed.  We could have had that baby anywhere in that room.  It seemed liked everywhere you looked in that room, there was a handrail or at least a corner to “bear down on”.

Lindsay continued to leak.  The baby goo was all over the floor and I was trying not to step in anything.  I was hyper aware of having a bum leg and wanting not to slip on birth juice.  We moved Lindsay from the bed, to the entertainment center, to the bathroom, on the toilet, off the toilet, back to the entertainment center, and finally back into the bed, which is where the grand finale took place.  Everyone took their places.  I was the official left leg holder.  It was an important post to man.  I was also in charge of the positive reinforcement.  The battle only lasted an hour and change.  It flew by and the hour seemed like a minute.  Everything happened in a flash.  I saw everything but remember nothing.  I remember the feelings, not the events.  I cried.  The joy overwhelmed me and I just melted into fatherhood.  Every cliché that every parent has passed along is real.  Having a child is a massive life event and your brain folds in on itself and places a bookmarker.  I will never forget that amazing event.  It is in my memory and I will cherish it for the rest of my life.  My daughter is the greatest trophy I have ever earned. 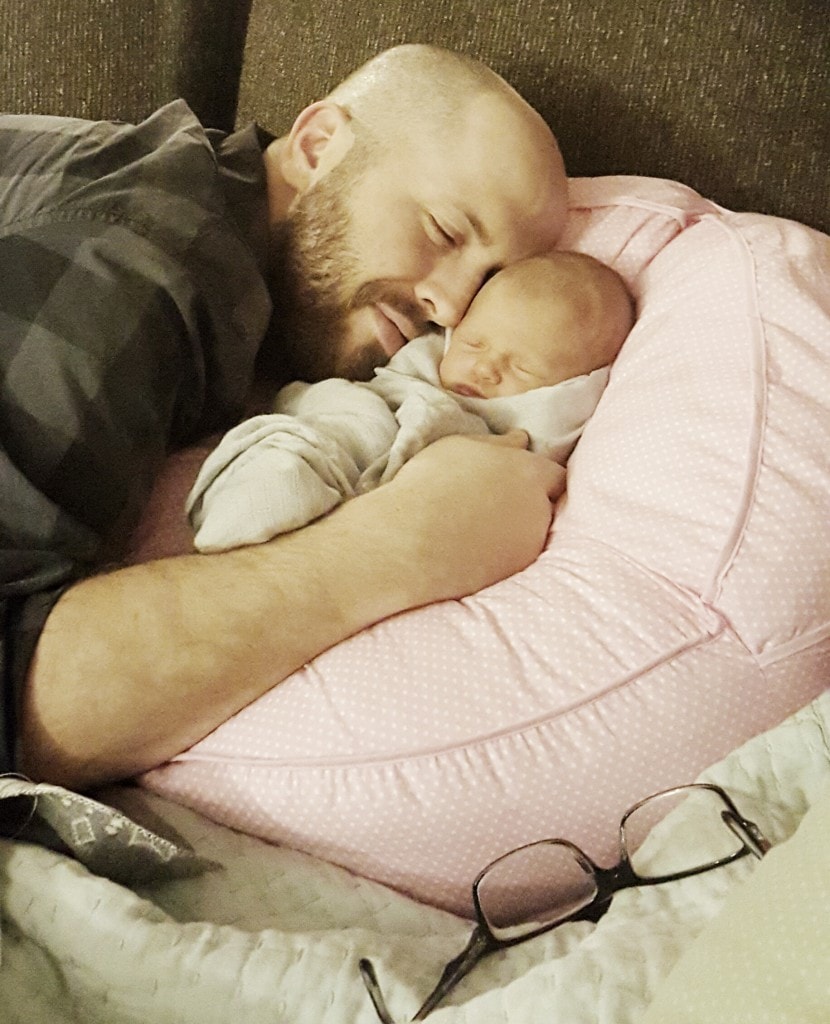