I have this new thing that's happening in my cooking. 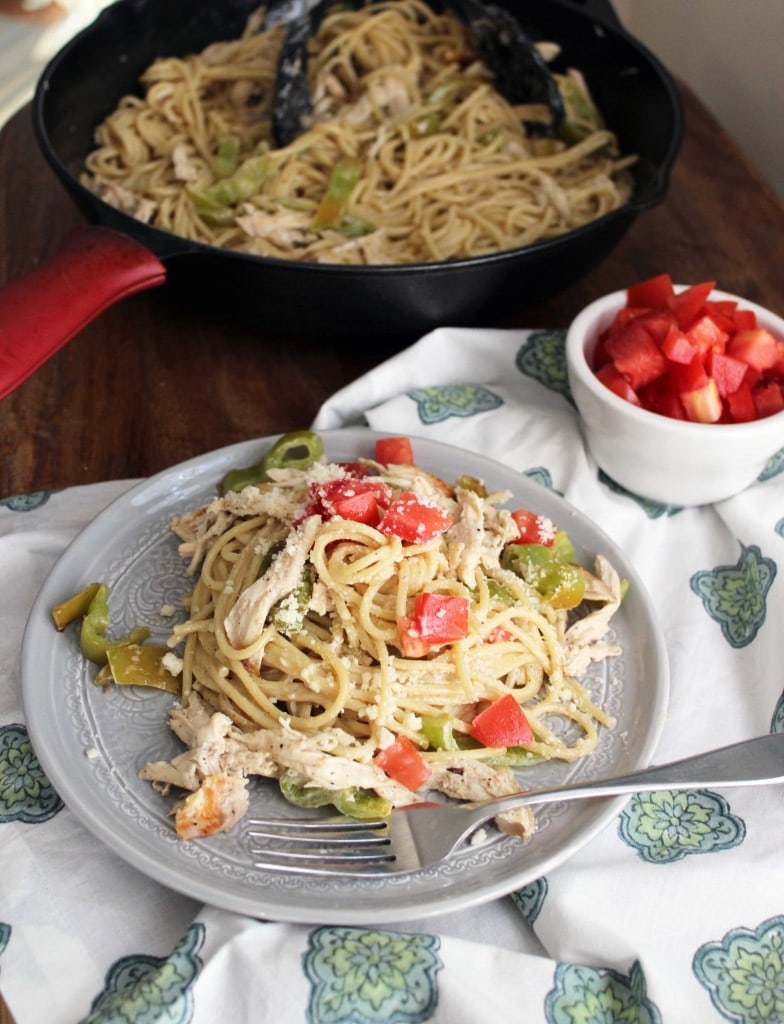 I don't have time for crazy complicated on weeknights anymore.  I mean, I kind of do, but my pregnant-lazy manifests itself in a required rest period after work before I move on to other work and/or cooking dinner, and God help us all if I have an event after work, which I do about 4 nights per week. 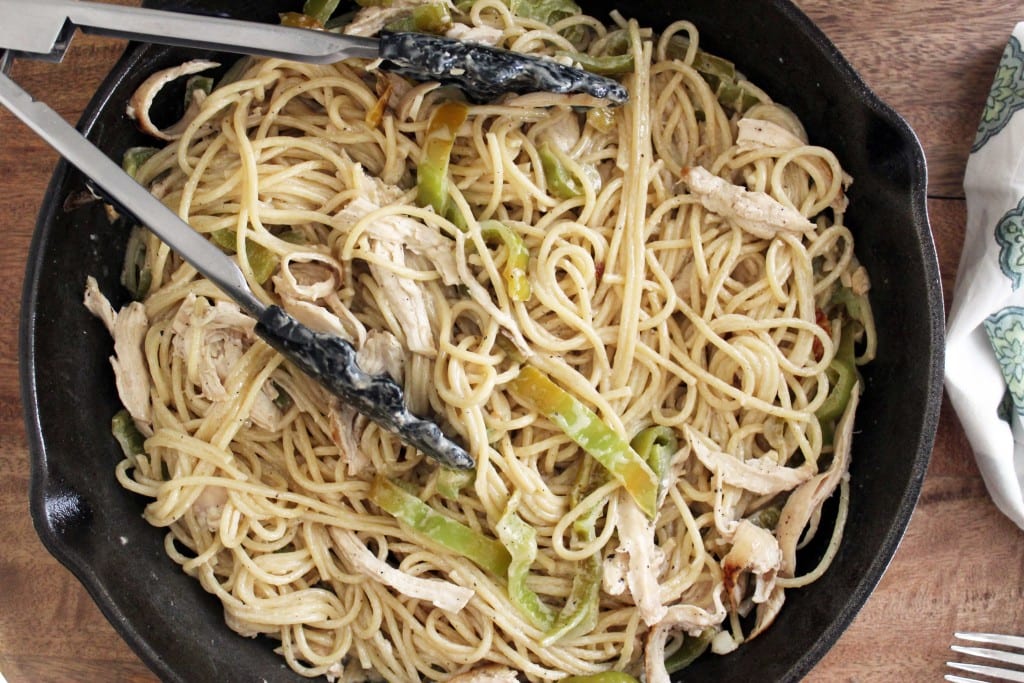 So, we have to speed things up.  I like meals that I maiiiinnly make, but with some storebought ingredients that I don't think I could make better, and that I CERTAINLY couldn't make faster.

So we are using storebought Alfredo sauce.  Which is perfect because traditional Alfredo is just butter and garlic and parm, right?  And then we jacked it up with cream, and NOTHING wrong with that, but since there really isn't an agreed upon method for cooking the sauce, storebought stuff is just great.  Mine is local and fresh and amazing.  It's from Naked Pasta right here in Greenville.  Those dudes make pastas, sauces, and accompaniments to tie everything together.  My new fav Farmer's Market thing is a few sauces and pasta that I can "cook" with fresh veggies and toppings and protein.  So that's what this is!  We're cooking, and using someone else's sauce.

You need some kind of long pasta as your base.  Then some pretty peppers - these are local cubanelle's, but any kind of mild pepper is great, even bell peppers!  Grab garlic, a chicken breast, a tomato, parmesan, and the all-important Alfredo sauce, about a cup, maybe a little more. 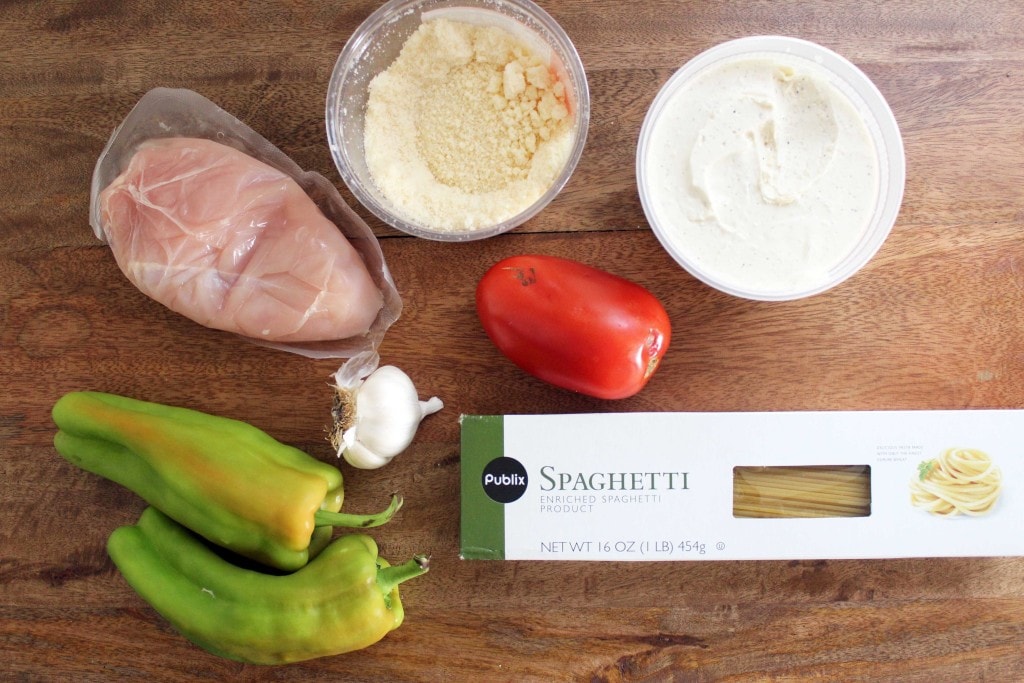 While you cook the sauce, boil the pasta to al dente, and right before you drain it reserve a big mug of the cooking water - we'll use that to thin out the sauce later.  Then, heat a large skillet to medium heat with a drizzle of olive oil.  Add the chicken, and sprinkle it with salt and pepper.  This chicken breast was about 8 ounces, which I think is more than enough for 4 portions of dinner.  But, add more if you'd like! 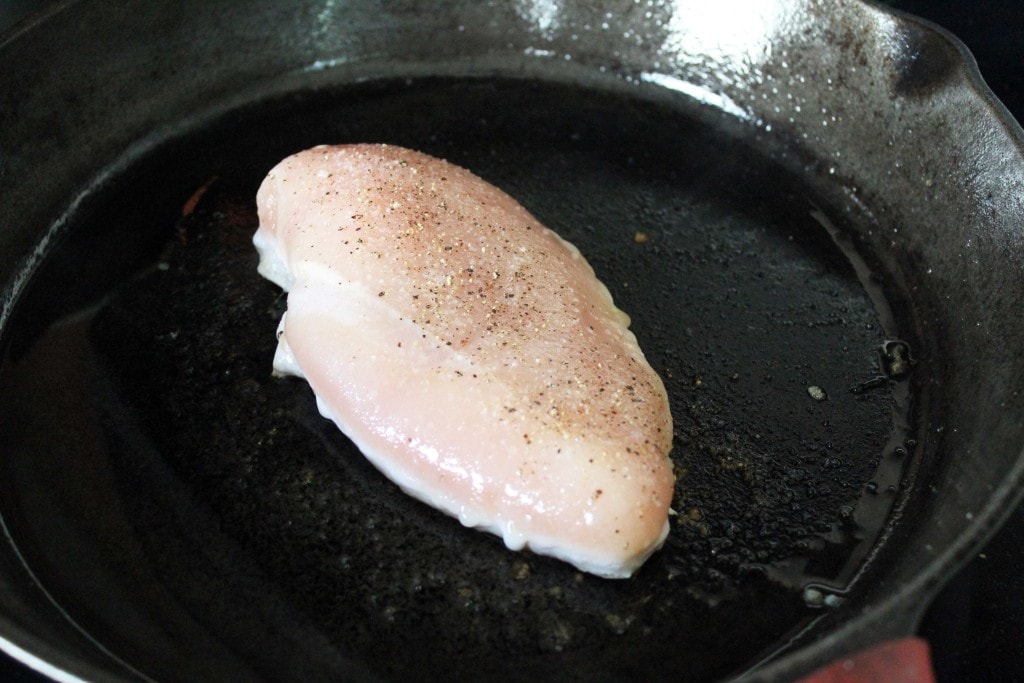 Cook the chicken for about 6 minutes on each side until it's just cooked through and browned, then remove it to a plate. 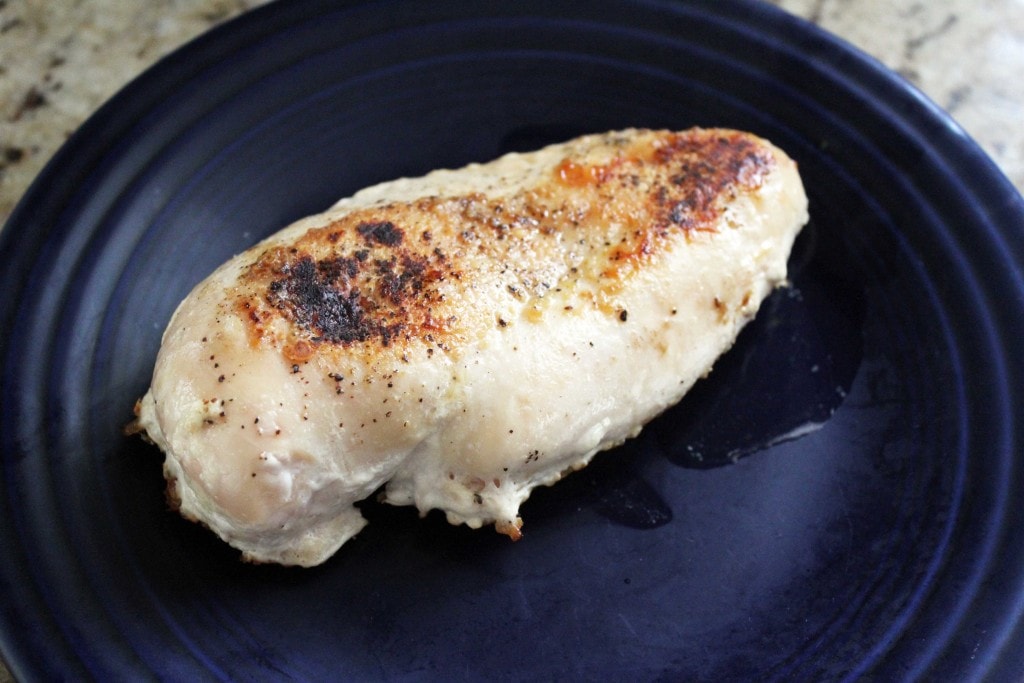 While the chicken is cooking, prep the veggies!  Thinly slice the peppers. 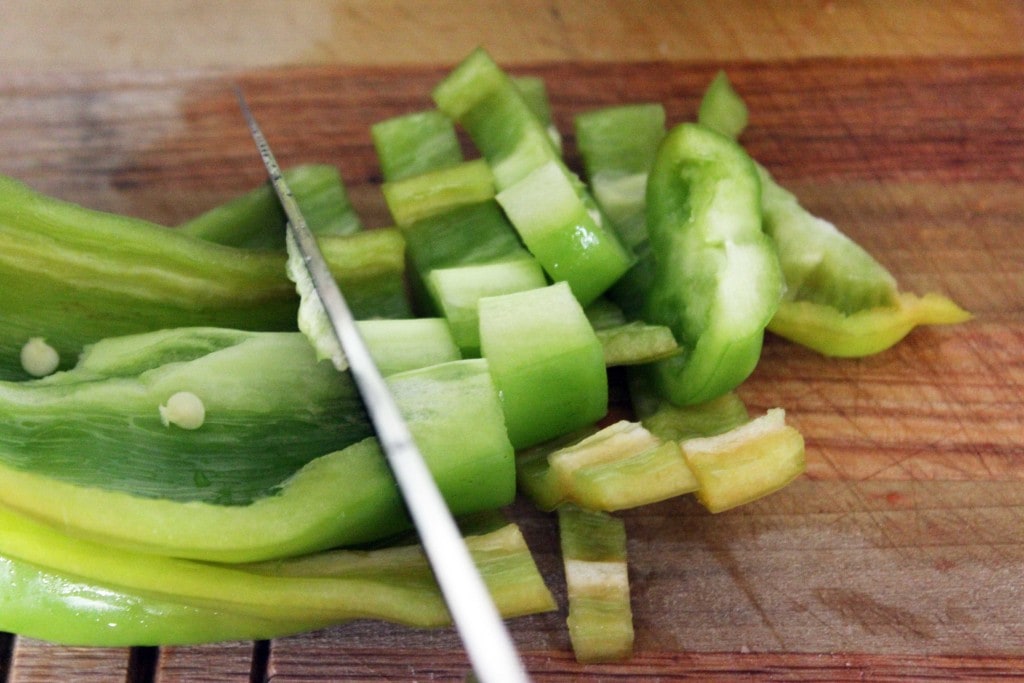 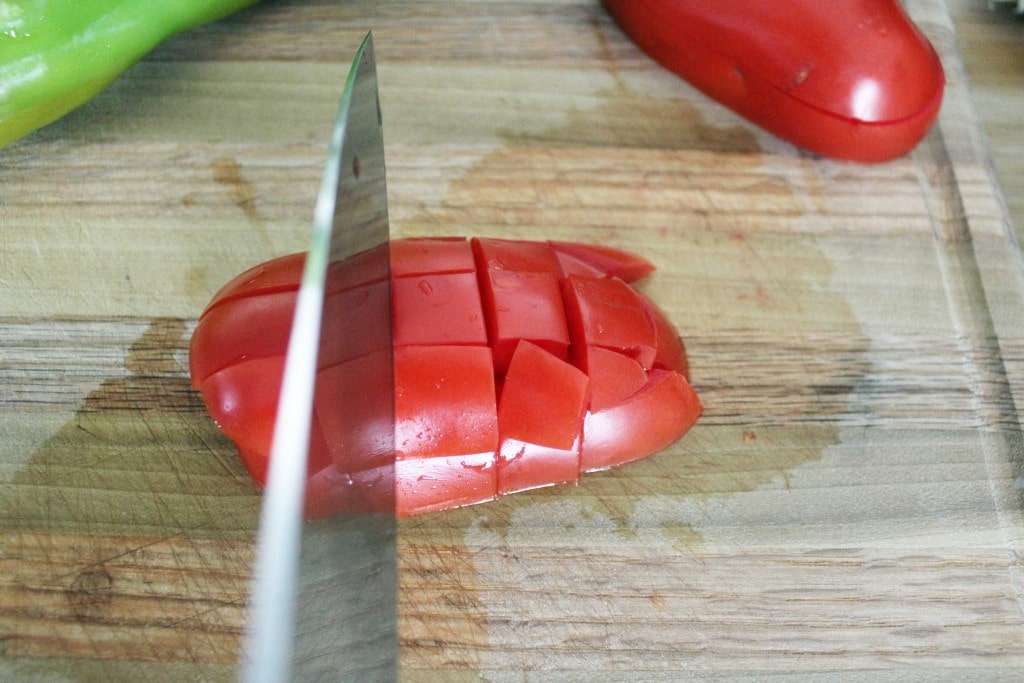 And mince the garlic! 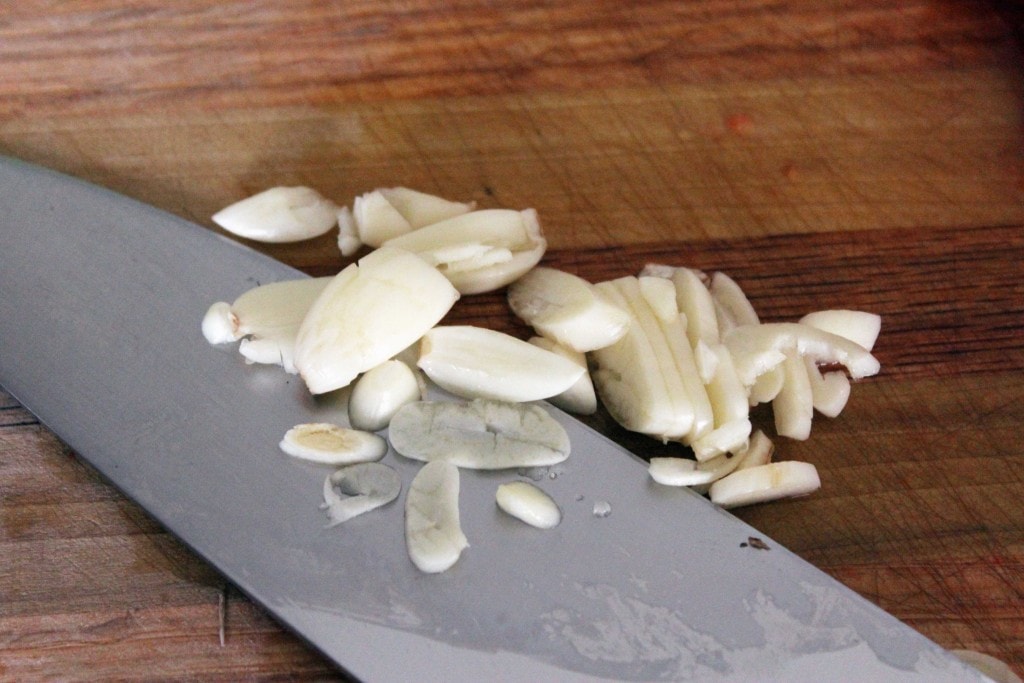 Done.  Take the chicken out of the skillet, and add the peppers for 2 minutes. 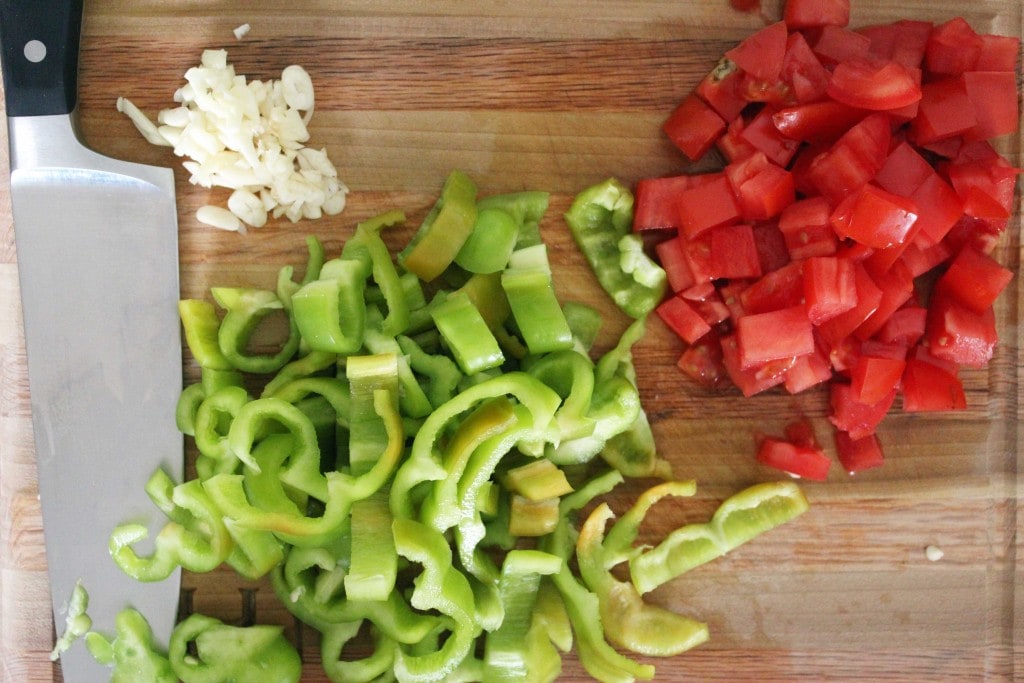 Then, add the garlic. 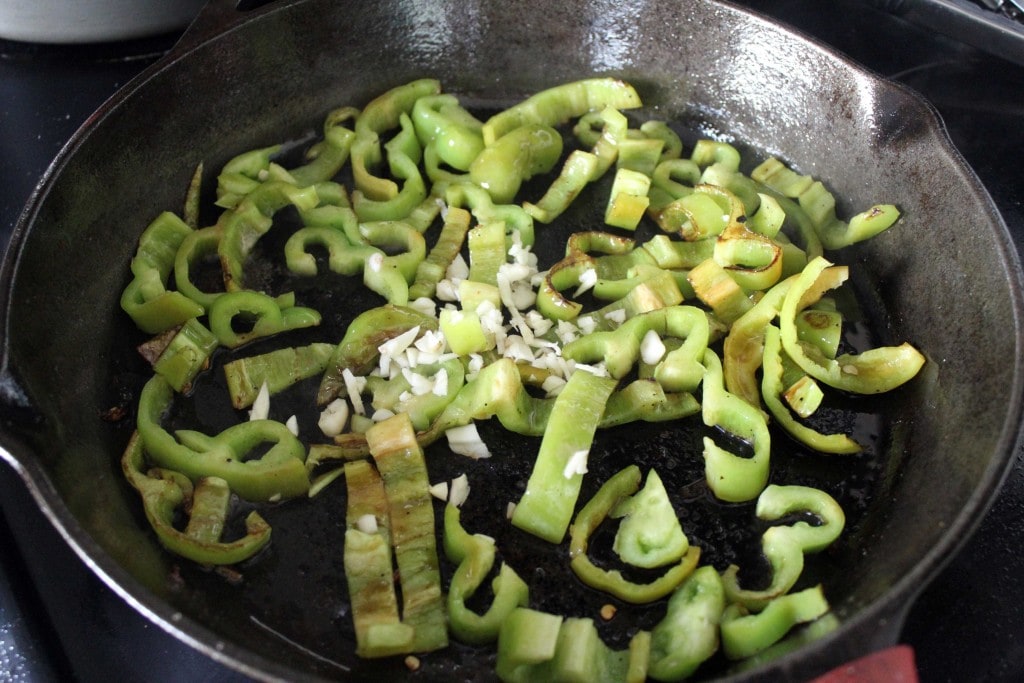 While the peppers and garlic are cooking, shred or chop the chicken into bite-sized pieces. 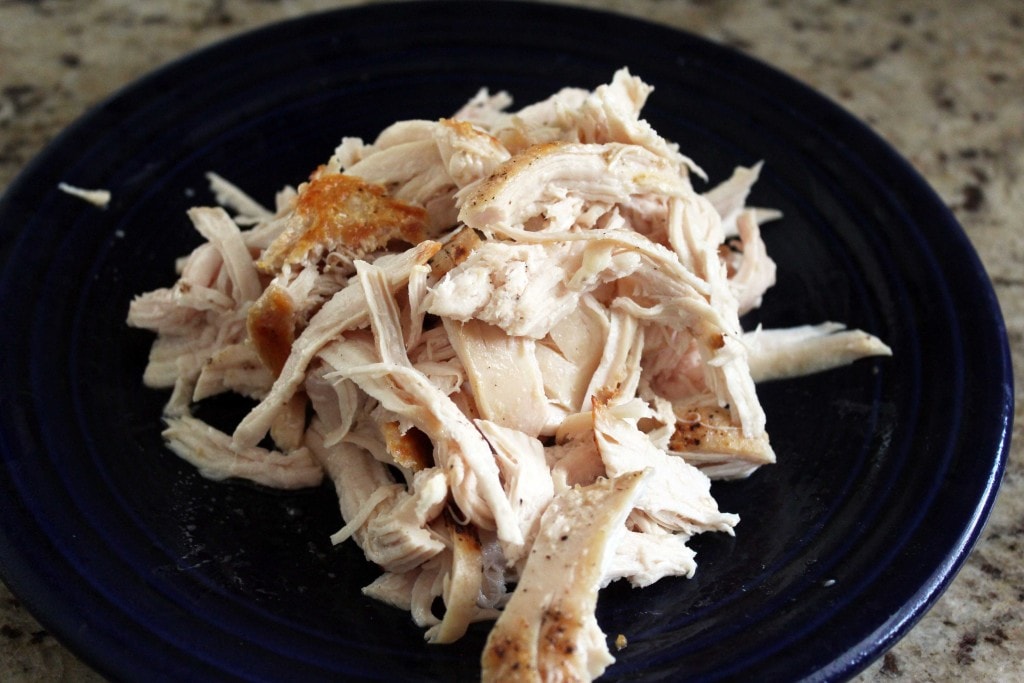 Now, we just toss everything all together!  Add the Alfredo sauce and some of the reserved cooking water to the pepper mixture. 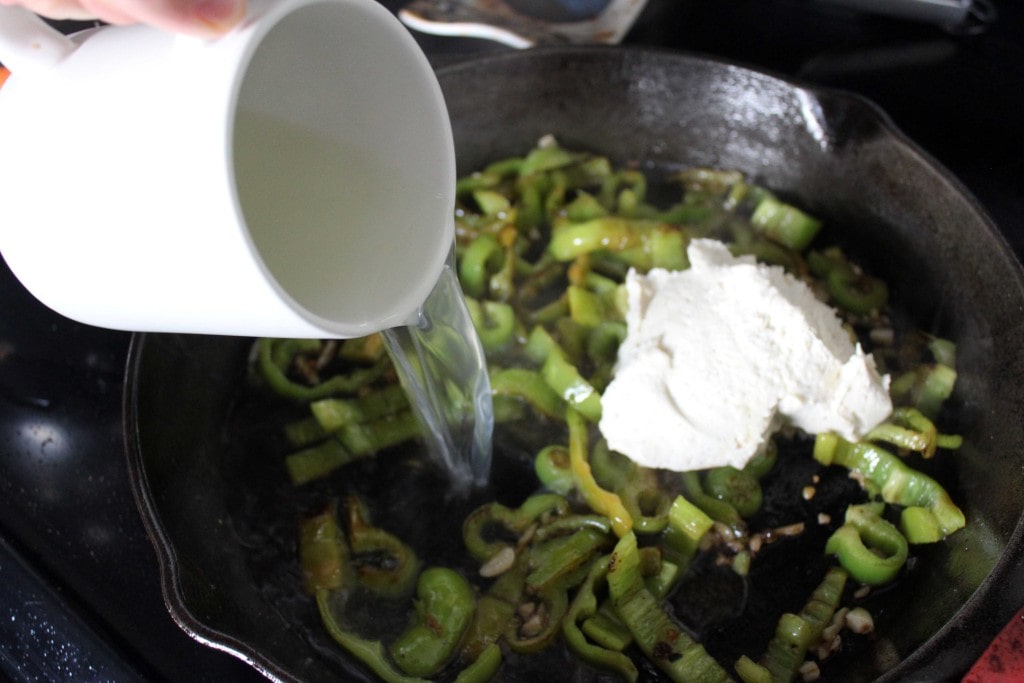 Then, add the pasta and the shredded chicken. 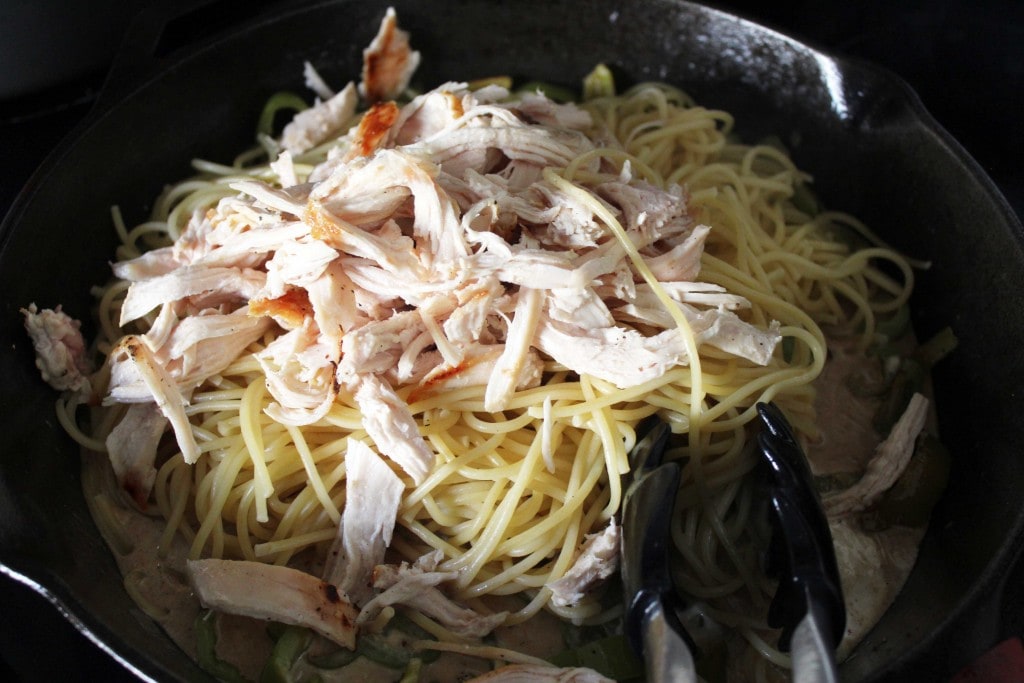 Use tongs to toss everything together, and just keep adding a little bit more cooking liquid at a time until the sauce has thinned enough to coat all the pasta.  Taste it, and add salt and pepper if you think it needs it. 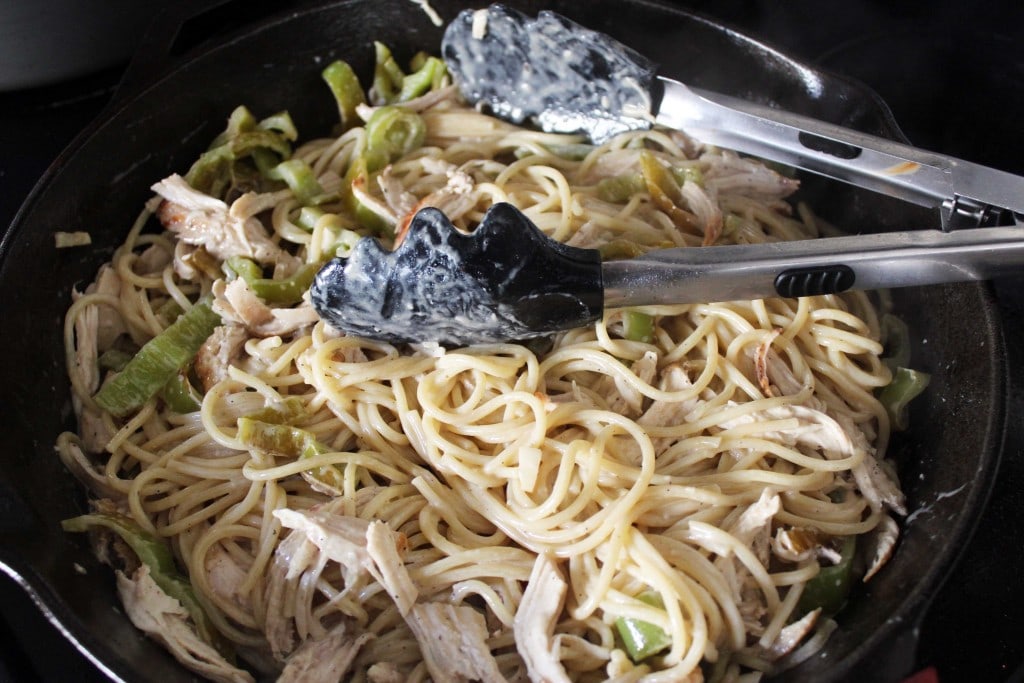 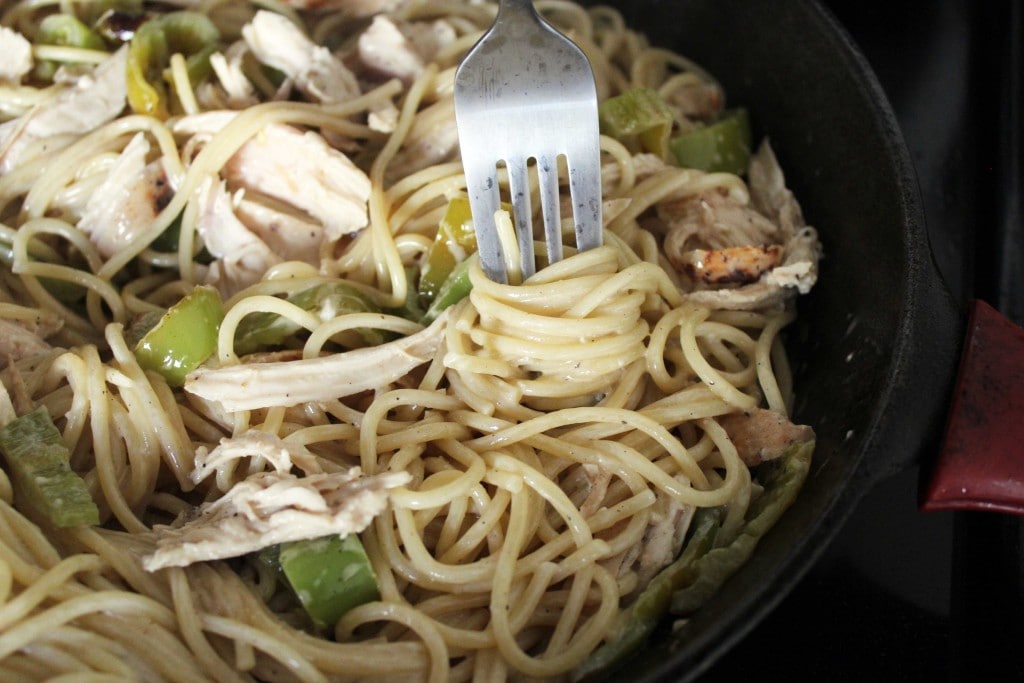 Toss the tomatoes on top of the pasta and add some parm. 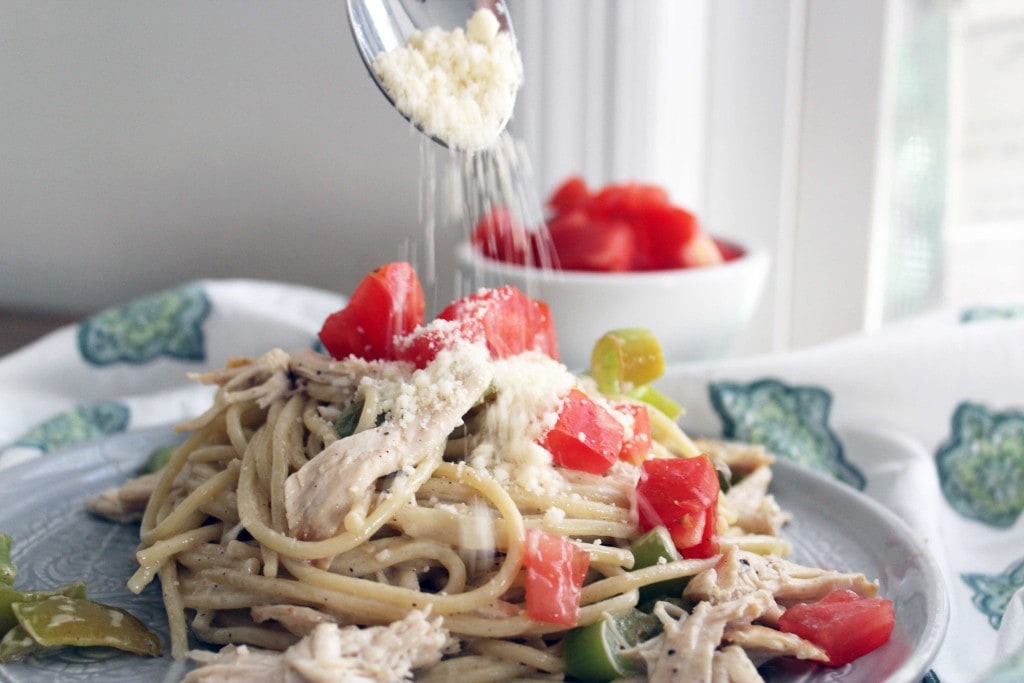 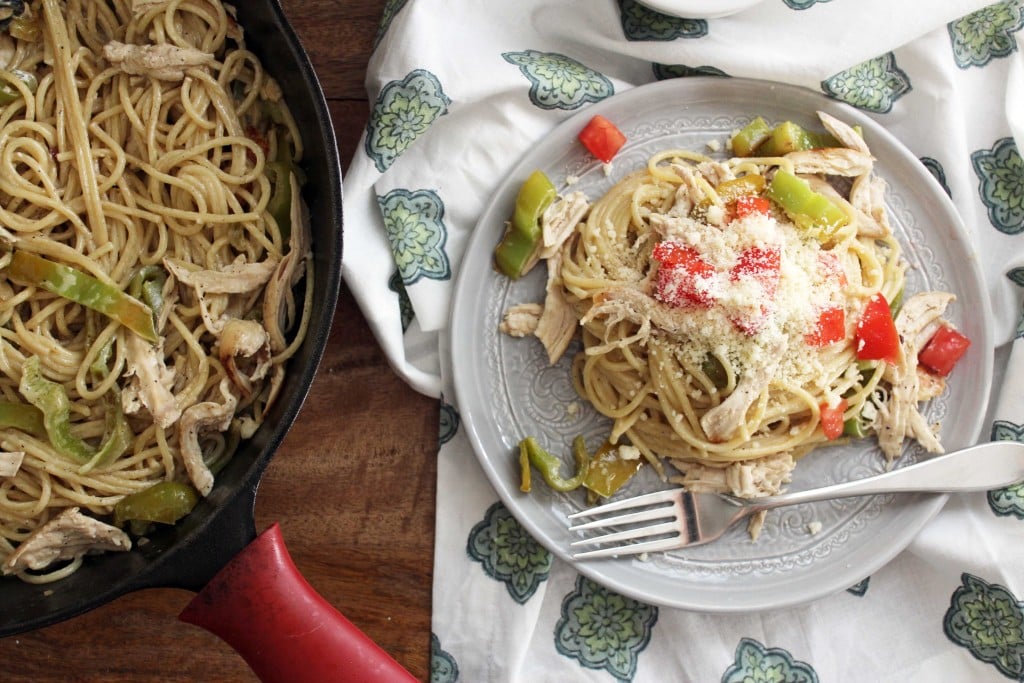 The key here of course is to start with an Alfredo sauce that you actually like, and there are some great ones in grocery stores.  If you live in Greenville, though, GET NAKED and fall in love with these sauces, which I am clearly promoting FOR FREE just because I like their products a lot.  Seriously. 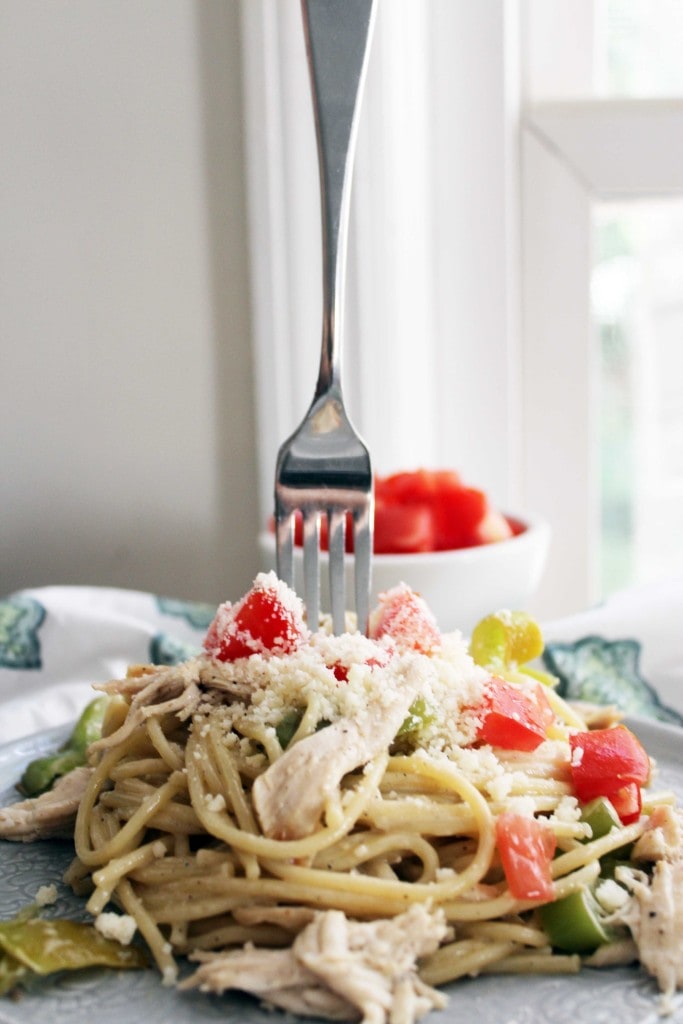 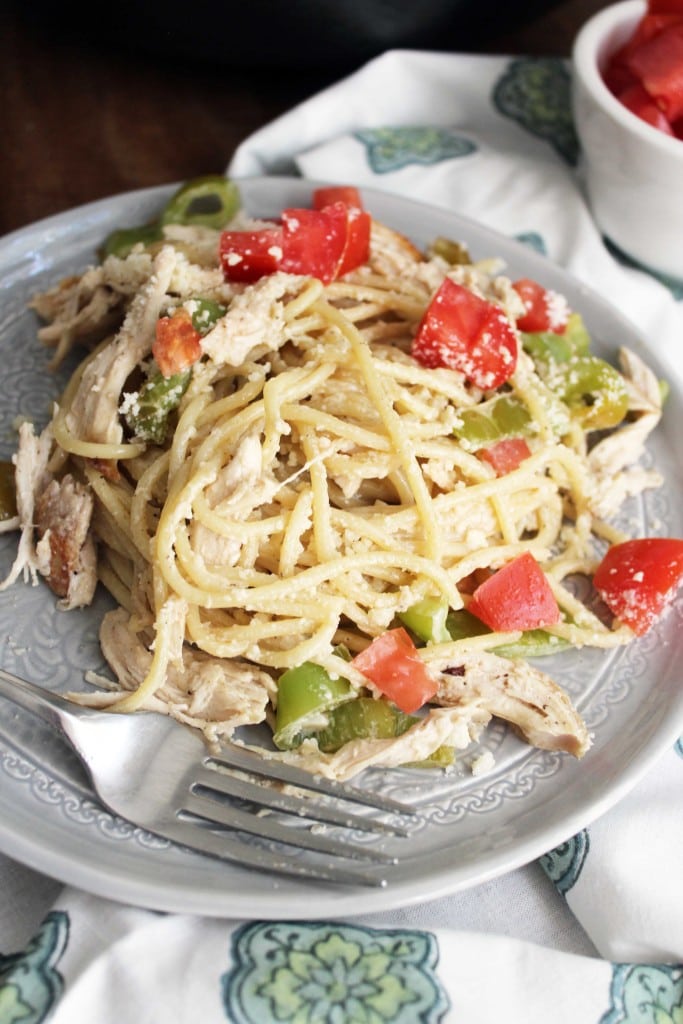