I have my final yoga test this afternoon but then tomorrow my sister and I are going to a yard sale and a farmers market so....just gotta get through today? 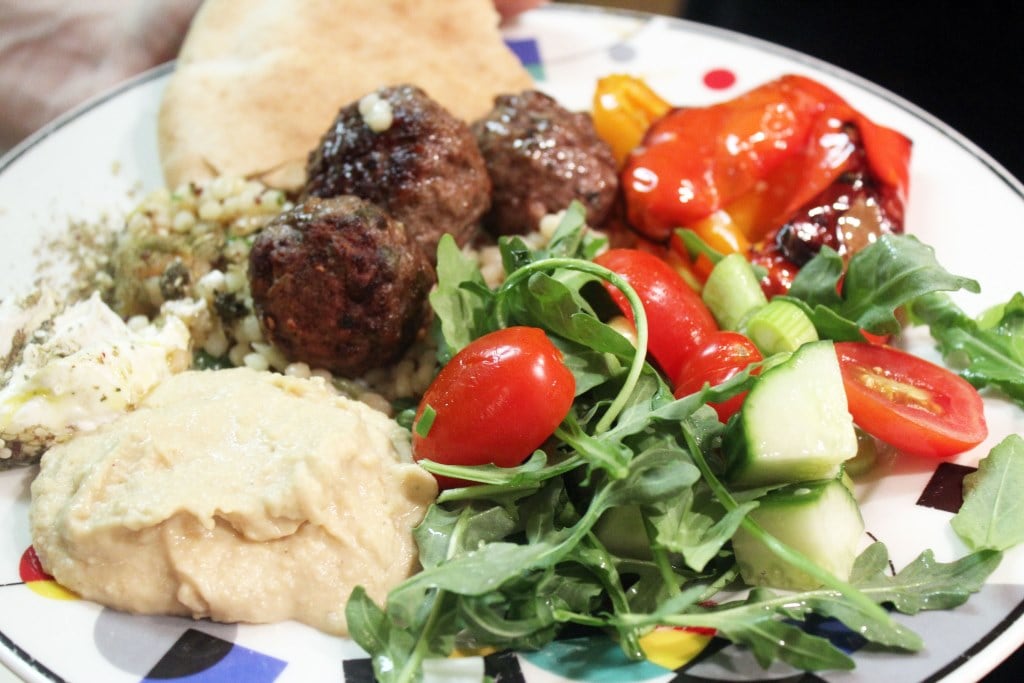 I made this meal last weekend, and it was super easy-peasy, and REALLY delicious.  Lots of the components can be made ahead or aren't even really recipes so...let's get to it!

First, appetizers.  I made hummus - the same way I always do, but added a pinch of cumin.  Grab some pita at the store - you'll want lots for this meal! 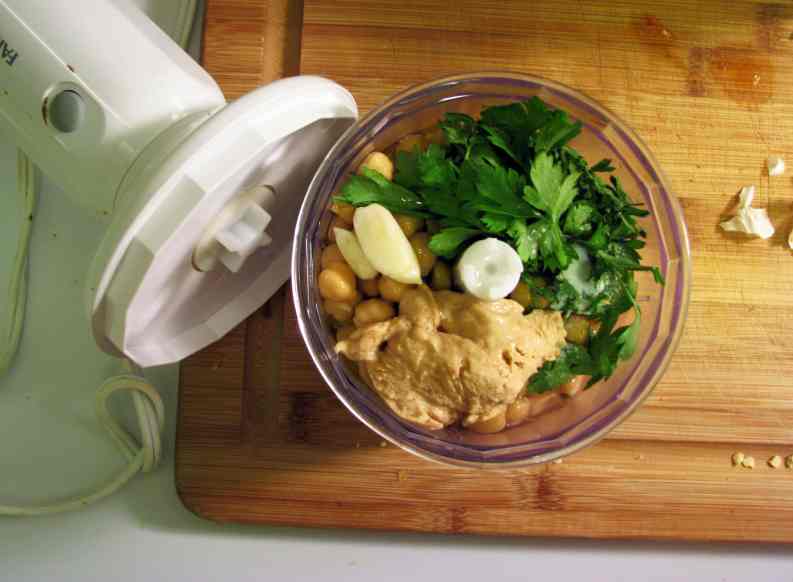 Then, some olives and labneh with zatar seasoning.  Do you know what labneh is?  It's like ... really strained greek yogurt.  Usually it's served drizzled in olive oil, and zatar is a seasoning blend from the middle east - it's DELICIOUS, and you should totally go to a specialty store to get some or google a recipe and make your own.  I got mine from the Middle-Eastern store in my town, Pita House.  It's basically my favorite place on earth, and between the labneh, pita, and zatar you have a whole appetizer that involves no cooking. WIN. 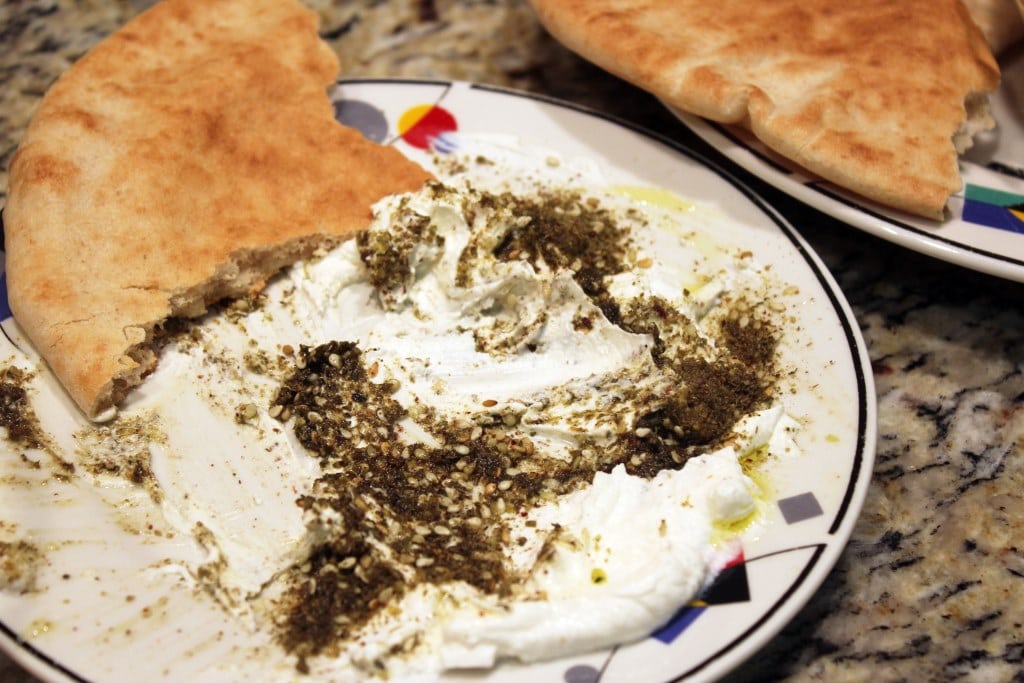 Now, entree.  Greens need to be involved, and I like a salad of arugula, tomatoes, cucumber, and green onion.  Easy stuff, folks!  Right before you serve, squish some lemon juice on it and sprinkle on salt and pepper.  Boom.  Done. 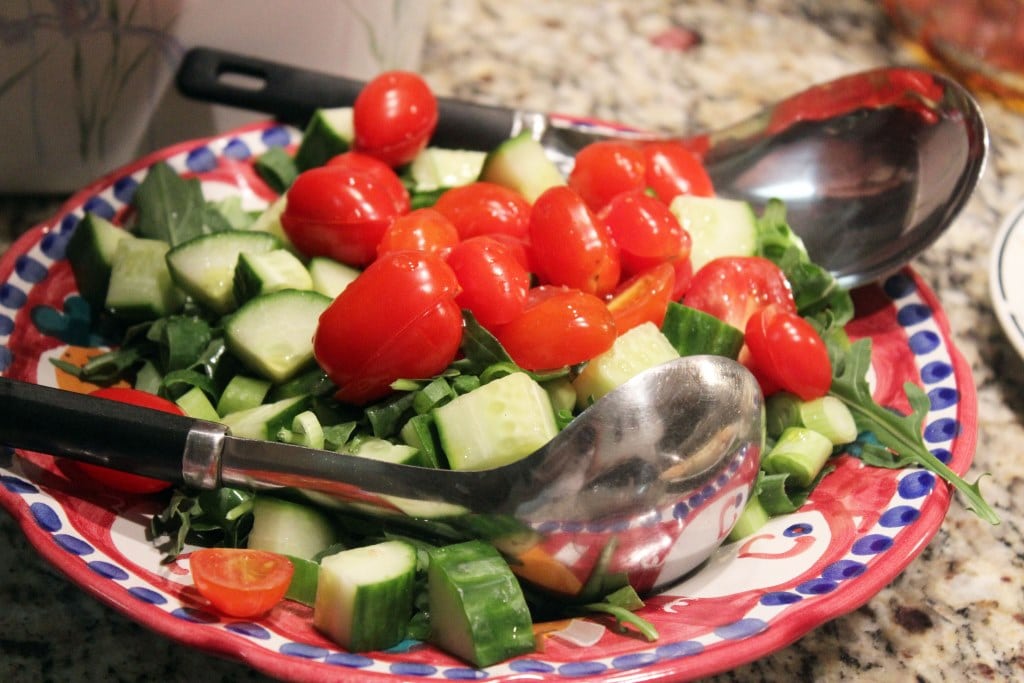 I told you yesterday about these lamb meatballs - You just HAVE TO HAVE TO HAVE to make them.  They're so delicious and I'm dying for you to try them. 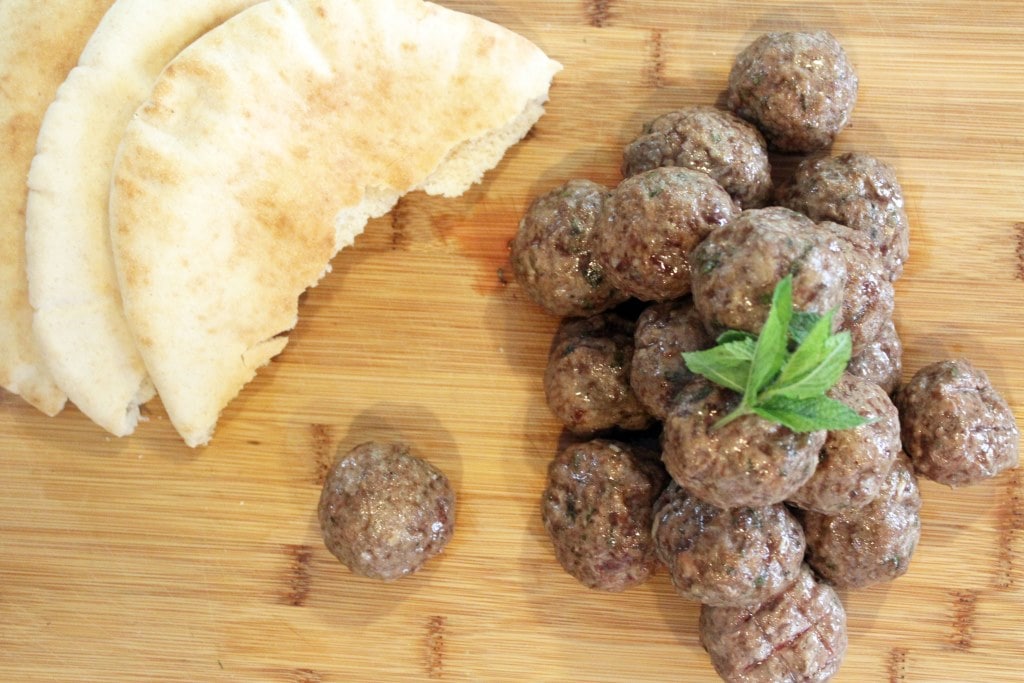 Beyond that, I made rice and veggies.  That's it!  I had a couscous rice blend that I cooked in chicken stock instead of water, then once it was cooked I stirred in some fresh mint and parsley. 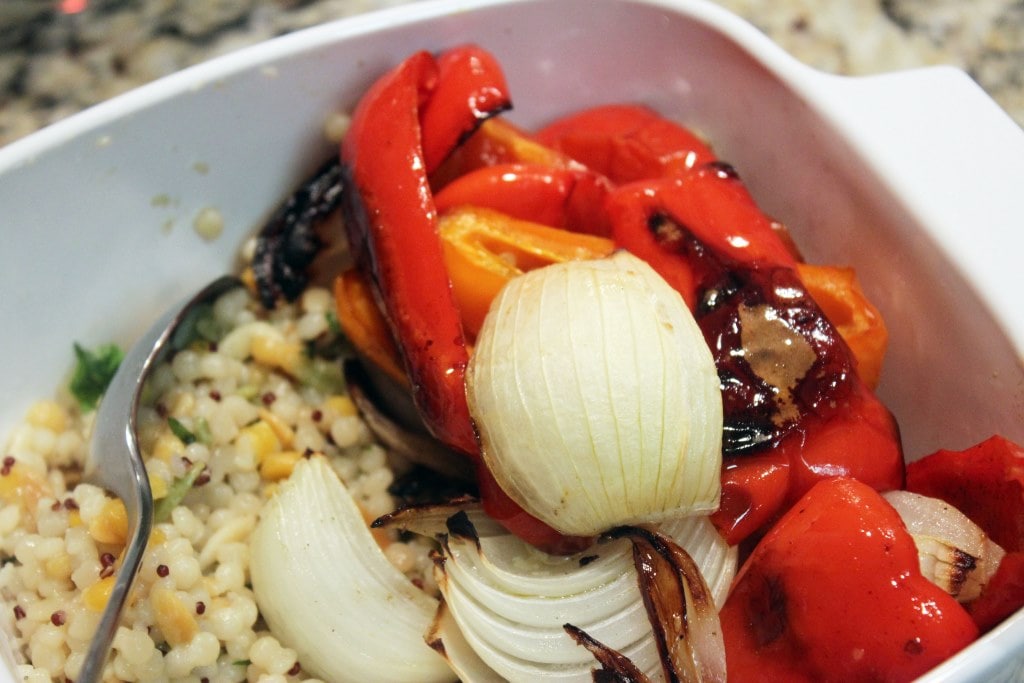 For the veggies, I roasted peppers and onions because THAT'S WHAT I HAD IN THE FRIDGE.  Seriously don't freak out.  Cut them into chunks, drizzle them with olive oil, sprinkle them with salt, and roast them for 20 - 30 minutes at 425F until they're tender and kind of brown on the edges.

To serve, I just lined everything up on the counter and let everyone make whatever kind of hodge-podge plate they like!  Some people layer it all like a taco salad, some people make pita sandwiches....whatever you like!  Keep the appetizers out - they go great with the other stuff! 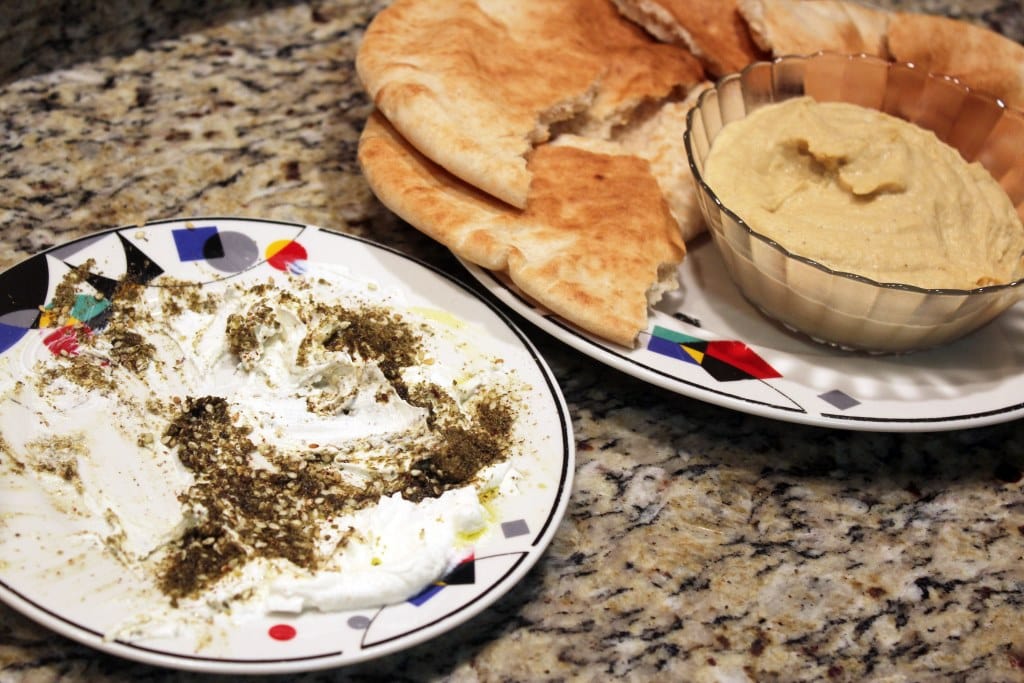 This is a REALLY fun meal, and I hope you try it soon.  You'll love it! 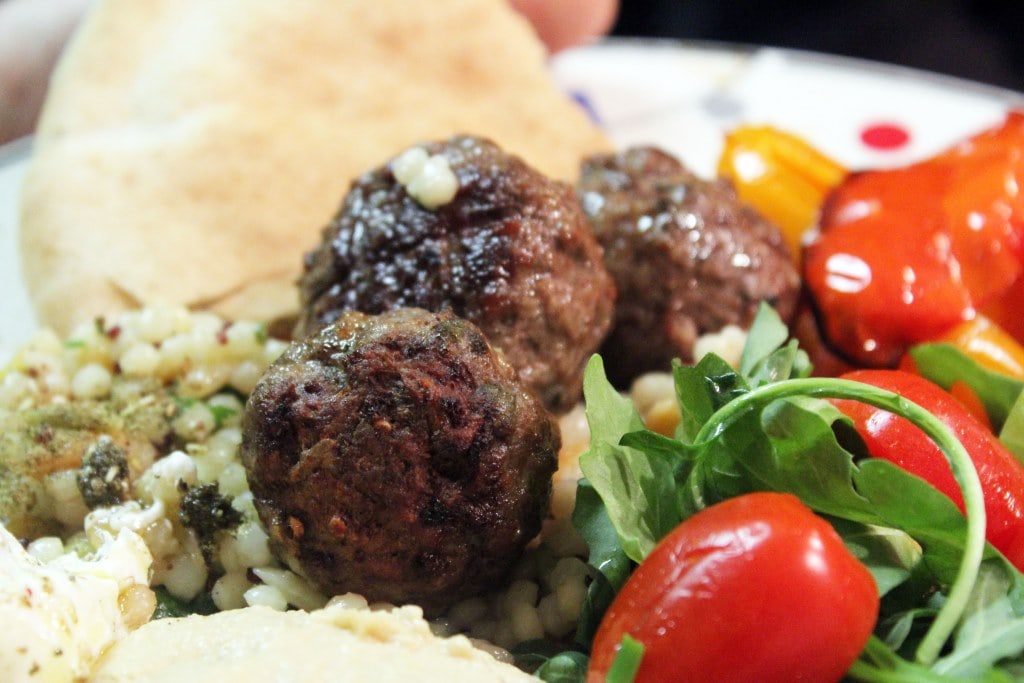 Recipes/Ingredients included in this meal: 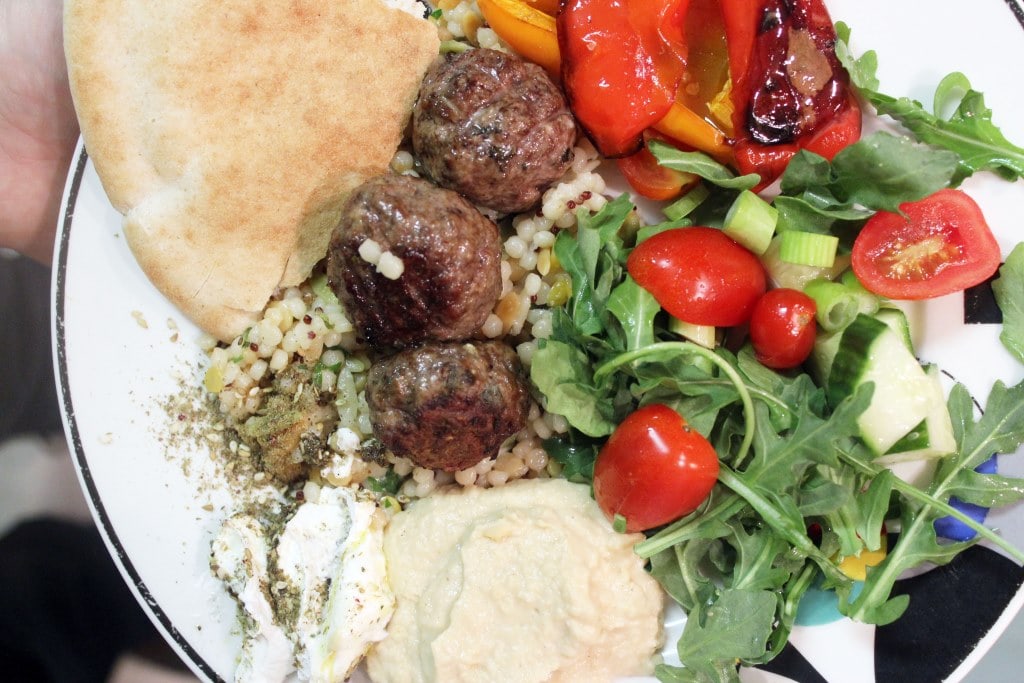 Submitted to Weekend Potluck.  It's a whole meal....better than a recipe, right?