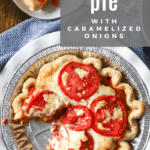 I love dubbing things MY NEW FAVORITE RECIPE because everything that I love goes through a pretty good phase of "let's have this once a week," but this is reeeeeally my new favorite recipe. It is also incredibly high maintenance and full of fat and carbs, two things that are very near and dear to my heart.

But, before you x-out, trust me when I say that even though there are a lot of steps to this recipe they are all super simple and the results are a thousand percent worth it. I found this recipe while on vacation with Jay's family back in June, when we were tag-teaming who was going to stay inside during naps on a boat day. I was making dinner that night and had a little extra time, so when I found this recipe I was all HECK YES LET ME AT HER. The recipe comes from Saveur and I have made it a few times with a tiny tweak here and there, but mostly I follow the recipe exactly as it's written.

The beauty of the recipe is that it includes a whole onion, caramelized for over an hour, roasted AND fresh tomatoes, and a great balance of salt + sugar to bring out the most delicious tomato flavors. There is mayo in the dish, but just enough to hold the cheese mixture together, so if you hate mayo don't worry - it serves a purpose but doesn't add any flavor. The Saveur recipe includes instructions on making pie crust which I firmly ignored in favor of a local all-butter crust made at my favorite grocery store IN A TIN FOIL PAN. I do not care that this doesn't make for the best presentation, it is delicious and saves on dishes so we're going for it.

I find that caramelizing onions always takes more time than recipes call for; I think that writers don't want to scare you off with "caramelize the onion for two full hours" or whatever, but the time it will take to do this step depends on your onion and the heat of your pan. I use the lowest setting on the stove when I caramelize onions so that if I do wander off the onion won't brown too much or burn. You COULD caramelize an onion in closer to 45 minutes if you kept the heat a little higher and stirred way more, but I was busy doing other things so I don't mind if the onion takes awhile. The key to the great flavor, though, is to be patient with the onion and let it get really soft and golden without searing or crisping at the edges.

Because the onion takes the longest of the components to prepare, I start the onion first in a skillet over low heat with some butter, oil, and a sprinkle of salt. While I work on the tomatoes I stir the onion between steps, every five minutes or so.

Here's the onion after about 30 minutes.

And here, after a little more than an hour. Like I said, I let this go for a loooong time to let the onion cook down and soften very slowly. When the onion is reduced to about a half cup and very soft and golden brown, remove it from the heat to rest until it's ready to go in the pie.

While the onion is working, preheat the oven to 400F and parbake the pie crust (with or without weights, I don't have any so I just bake the crust naked) for 15 minutes, then remove the crust from the oven and reduce the heat to 375F. Dice all but one or two of the tomatoes.

Slice the remaining tomatoes thinly and place them on a paper towel - we need enough slices to cover the top of the pie, so decide how many to slice based on how large your tomatoes are.

Divide the diced tomatoes into two portions. Place half of the tomatoes in a colander over a bowl. Sprinkle the tomatoes with salt and sugar and let them drain for as long as possible while you make the rest of the filling - this can even be done earlier in the day if you think of it.

Place the other half of the tomatoes on a small sheet pan, drizzle them with olive oil, and sprinkle them with salt. Roast the tomatoes at 375F for 30-40 minutes until dried out and slightly browned at the edges.

Now, at this point we have onions caramelizing, sliced tomatoes on paper towels, diced tomatoes draining in a colander, and more diced tomatoes roasting in the oven. Multitasking! This is why I let the onion take so long, so I don't get confused. Thank goodness I'm pregnant and unable to drink. Although, wine with this level of prep sounds fabulous. While all of the filling components are finishing up, make the cheese mixture by mixing the mayo, fontina, and parm with some sprinkles of salt and pepper.

When all of the components are done (pie crust baked slightly, onions caramelized, tomatoes drained and roasted, cheese mixture done), assemble the pie. Stir the fresh and roasted diced tomatoes together in a bowl with the caramelized onion and some more salt, sugar, and several grinds of pepper.

Spread the tomato/onion mixture into the pie crust, then spoon the cheese mixture all over the top of the pie. Top the cheese with the tomato slices, and sprinkle THOSE with salt and pepper. (phew)

Bake the pie for about 30 minutes until the crust is golden and the tomatoes on top are browned slightly. Let the pie rest for about ten minutes, cut, and eat!

And, I mean EAT. I legit ate about a third of this in one sitting the last time I made it, blame the fetus, and every time I've made this I can't get over how delicious it is. The key is to use all of the salt and sugar in the recipe - it seems like a lot but makes the tomatoes SO flavorful.

I've also mixed up the cheeses based on what I had on hand and other melty white cheeses like cheddar, mozzarella, or provolone work really well with this.

This can definitely be made in advance and served cold or reheated in the oven for a few minutes to be served warm - wouldn't this be delicious for brunch with a little salad on the side? And, like I said earlier, you can absolutely make your own crust for this but the filling is SO good that it almost seems a waste of pastry work unless you're just really into that kind of thing.

I say spend your time on the caramelized onion and let premade pie crust in tin foil take over the rest.

This is so worth the effort and calories, I can't say it enough. Check out the original recipe on Saveur; my version is below.

Caramelized onions, roasted and fresh tomatoes, and plenty of cheese come together in this ultimate tomato pie. It takes some time to make, but every step is simple and the results are beyond worth it.