It's almost bad as a recession, I'm telling you. 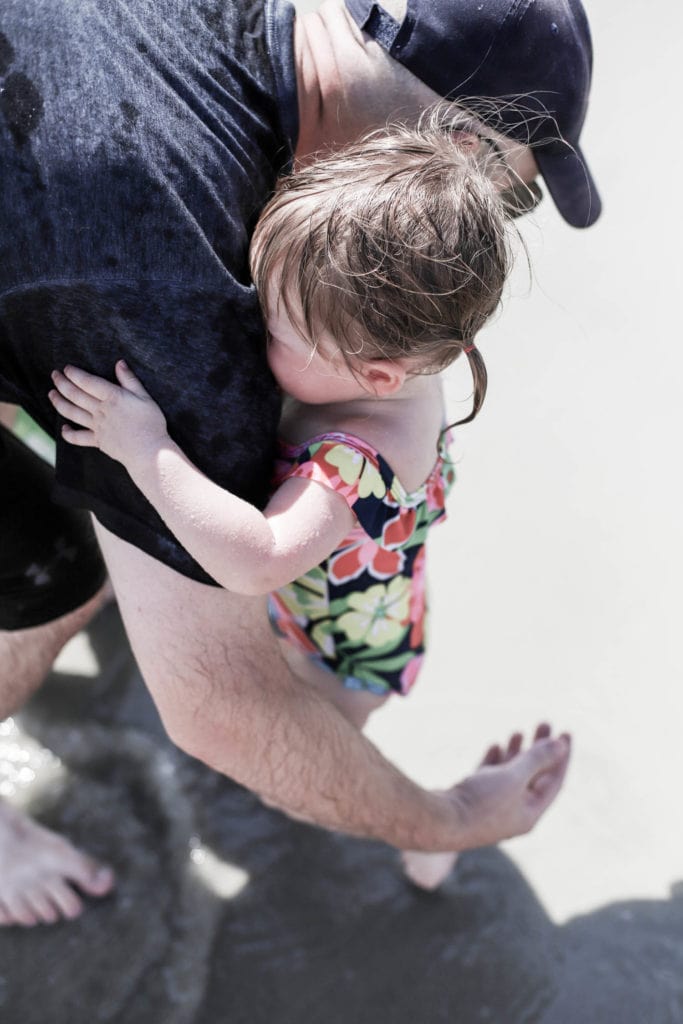 I took this picture of Beck and Jay at the beach a few weeks ago, and it pretty much encompasses how she's been for the past month or so. Needy. Whiny. Clingy. Adorable.

When your baby is a baby, you're all concerned with milestones and development and what should be happening when. Then, without noticing, you get back to life and work and they kind of are carrying on like regular humans, so you forget to read stuff about development, and then it all goes to shit in one day with no warning. I'm sure other parents are still reading about development, but my new super-busy-with-work-and-toddler MO is to Google things after they happen, not before.

So when the toddler regression hit, I was fully unprepared for it. Google, though, tells me it's totally normal and fiiiiiiine (your MOM is fine, Google) and just wade through it. So I'm telling you about our experience so you aren't totally blindsided like I was. Maybe blindsided is a little dramatic, because I mainly feel like parenting is watching and trying not to visibly be surprised all the time, but instead internalizing the fact that everything changes the exact instant you think you have something figured out. But, for us, we'd had several months of relative calm on the development front, Beck was sleeping perfectly, eating vegetables, spewing words like nobody's business, and only tantrumming sometimes.

But then! She started to get weird on naps. She'd chat for about half of her morning nap in her crib (I don't get her out of bed if she hasn't gone to sleep yet unless she's really upset), then sleep for about 30 minutes, then wake up not really rested but not tired enough to go back to sleep, and it was all kind of crazy. The internet and the pediatrician said that after 18 months and before age 2 is a good time to move from two naps to one, so I figured she's ready for that. Some days she took two naps if she seemed really tired, some days she took one if we were busy and she was entertained and not cranky. It was easy, no biggie, and she seemed ok.

But then! We went on vacation for Labor Day, where she HOWLED for five hours the first night we were there. We were sharing a room and all three of us were miserably tired for most of the trip, even though we had a fabulous time. By the time we left to come home Beck had produced her first molar, so I was all it was just teeth, now that's over. But when we got home it kind of wasn't over. Going to bed at night was fussy and involved more steps than usual and a few nights involved straight up screaming. I don't love cry it out as a first/early/always method, but I do think there's some merit to kids knowing that we sleep in bed and screaming won't necessarily produce an adult to help you stall. Naps kept being a struggle no matter what we did, no matter how tired or untired Beck was (in case she was overtiring and that was causing her to not sleep, but that seems to affect little babies more than toddlers), and one particularly enchanting evening Beck spiked a 102F fever late in the day that was gone by morning. Riddle me THAT.

The 102 fever, it turns out, was helping with two MORE molars, the massive ones that take up half of her face. Luckily I caught on to that early and provided ample medicine to ease the agony.

Throughout all of this, there's been more bad behavior, more intentional defiance (stay calm, do not engage, it's not personal YES IT FUCKING IS), weird food "preferences" (straight white carbs is not sustainable, my dear), and random whininess that hasn't fully gone away, even though I think the actual regression has passed after about a month or so of this madness. Somewhere in the middle of all this I remembered my neighbor telling me that her kid was having an 18-month regression, and I was positively gleeful because Beck is older and no regression for US, thank you very much. The regression can happen anywhere in the second half of the second year, so shame on me for being proud of something that 1. wasn't true and 2. that I had no control over.

Doctors and developmental experts (not me, I just read and regurgitate) think this: Around this time, kids have a big cognitive explosion that is exhausting and helpful but not helpful because it makes them jerks. They also pop out some teeth that really hurt. They also go from needing two naps to one, but that transition is tough. If/when any of those things happen at the same time, a lot of other working systems like sleep and eating and attitude can be thrown way off. AND THEN parents get more frustrated and either randomly start "disciplining" or yelling or witholding love, and everything goes bonkers.

Honestly, it made me feel a lot better and a lot more patient to know that 1. this is vaguely normal and 2. it will not last forever. And it didn't! It didn't go back to normal as it was before, because now we have an older child with different needs. Now Beck needs a little bit longer to go to bed - not half an hour or anything nuts, but she has a few more requests and sometimes wants to be rocked for 5 minutes or so where before we could kind of chuck her in the crib and wave and she'd be out like a light. We have to be a little bit more insistent on food and give her healthy stuff when she's HUNGRY. She's also old enough to make deals, so we have started doing a "bite of peas and then you can have a strawberry" kinds of things. I have no clue if that's going to somehow harm her, but it involves her eating vegetables and no one yelling so I'm OK with it. We don't engage with bad behavior but we do have very concrete consequences when she is clearly choosing to ignore something we say (do not draw on the wall or I will take the crayon from you. Ok, you drew on the floor, I'm taking the crayon, let's pick something else to do.). We try to be age-appropriate and calm, and some days we are great at it and some days we are not.

Looking back, like with everything so far, the terrible stuff doesn't last as long as you think it will when you're in the thick of it. It also isn't as bad as it seems if you know that it's normal and temporary, for me at least. And, the benefit of most of these growing pains is that now we have new teeth, a new sleep schedule, and new cognitive skills that are just SO much fun to witness (Beck figured out how to use AND, and I swear she thinks of lists to tell me just so she can use it appropriately, it's so cute).

Also, Beck knows a lot of accurate body words (vagina is not gross or a cuss word, sorry), and a few people have laughed when she says penis so now she says it a lot. I intend to write this on a preschool application as an indication of budding humor.