Home » Marriage » That One Time We Went on a Cruise.

So, we went on a cruise.  A Carnival cruise!  Carnival Fantasy from Charleston, to be exact.  We left on Thanksgiving Day and got back the Tuesday after, which means we had 6 days and 5 nights of just being with the two of us. 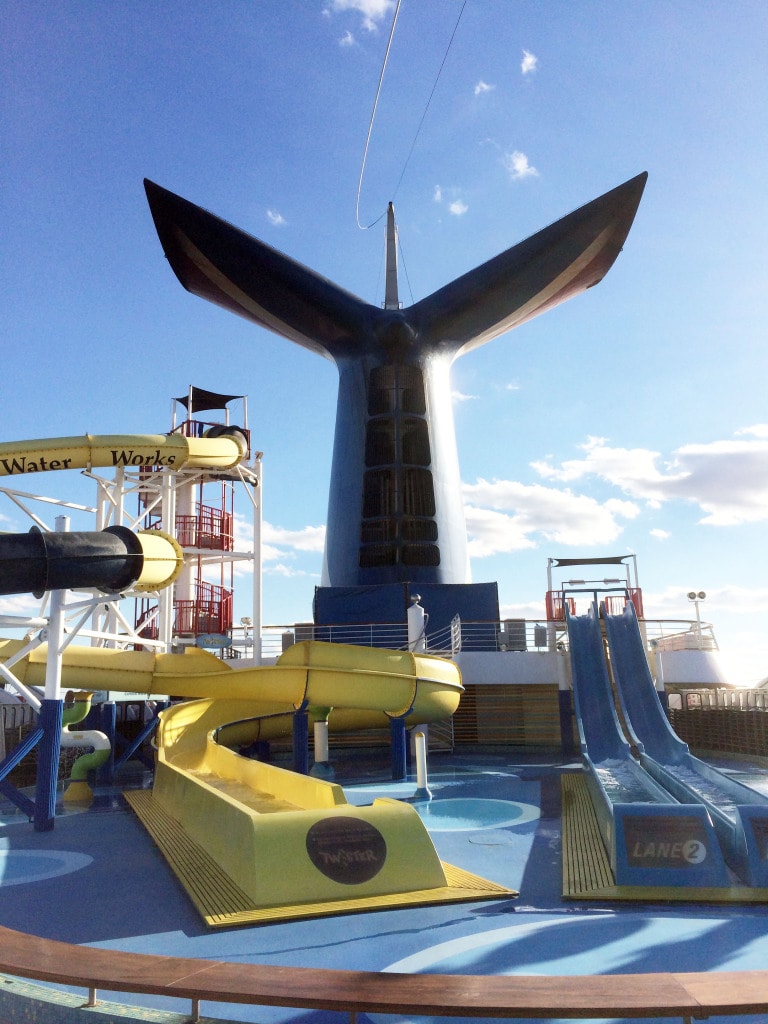 That part was probably my favorite part of the entire trip.

The boat itself was great, the food was fine, the docked days were GREAT (but that's a whole separate set of pictures), but really really being away from your house and INTERNET and CELL SERVICE is my new "do this to save your marriage" counseling tip, for realsies. 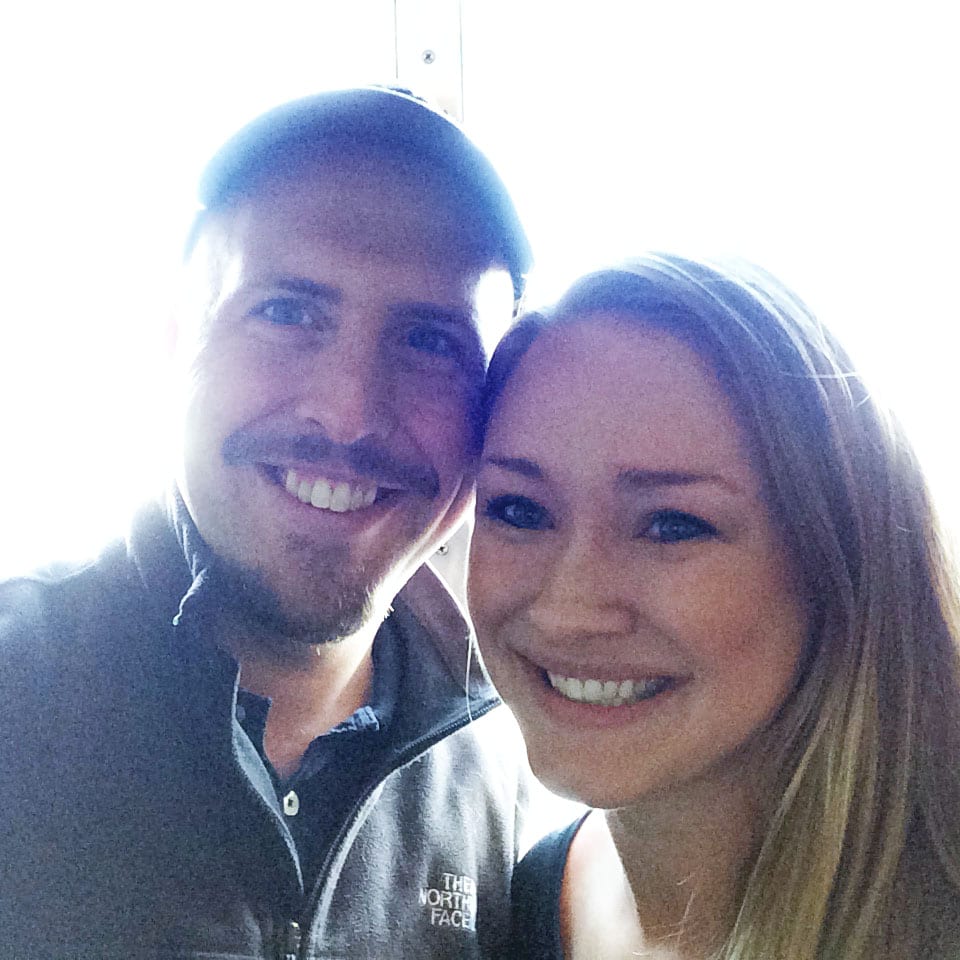 To clarify, our marriage doesn't need saving.  But who couldn't use a little boost every once in awhile?

Up first, getting on the actual boat.  Um.  Do you know that it takes awhile for 1,200 people do anything all at once?  A long while, frankly.  It's like an airport except you're all doing exactly one thing at the exact same time, so the process of parking, shuttling to the terminal, going through security, waiting in line to get your room key is a LONG one.  Jay wasn't impressed but I guess this is just how life works so it didn't bother me too much.  We did see an employee get yelled at for being rude to passengers, which was unfair because he was only being rude to the ones that were holding up progress by being utter morons.  We liked him. 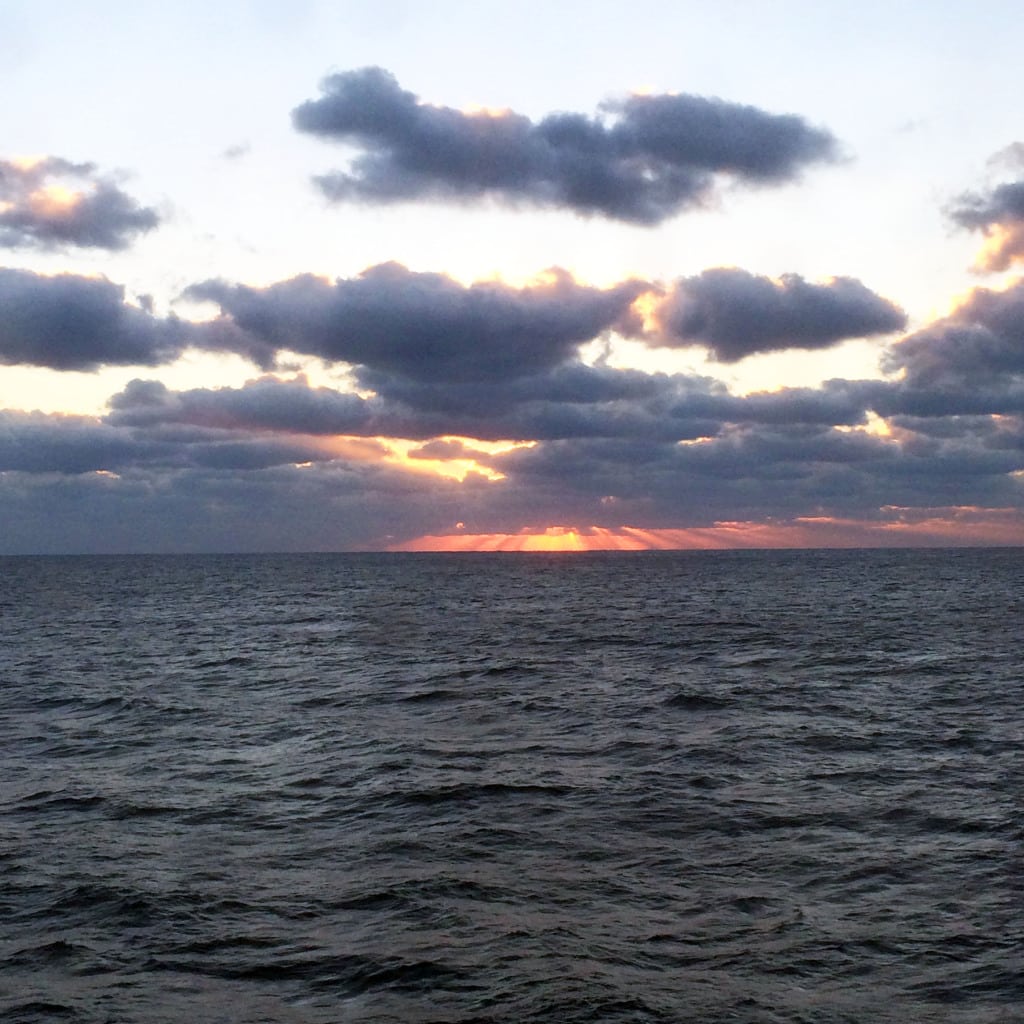 As for the booze-sneaking that you've been reading about, we went with coconut water boxes.  You know those little boxes with the screw tops?  We drink them a lot anyway, and just started saving them.  We filled them with vodka and scotch, and Jay got asked about it and pointed to me and was all "crazy hippie yogi..." and no one said a thing.  It was an inspired idea because not a ton of people know what that looks like compared to, say, a water bottle that's clearly been opened.  Way to break the rules, eh? 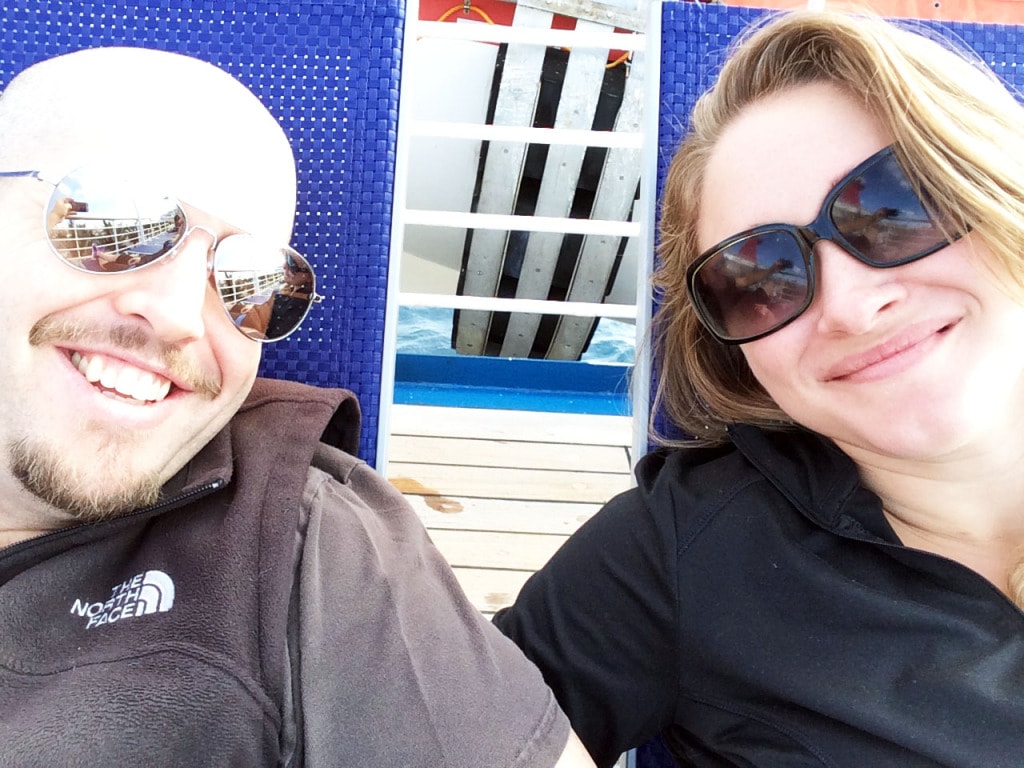 Just like with every vacation, you kind of make your own little routine on a cruise, you know?  Once we got on the boat we found our room, which was small but nice, and then wandered around to get the lay of the land.  I WILL say that the bar/food options were RIDICULOUSLY over-represented on the Carnival website, which boasts more than ten food options for the boat we were on, and in reality some of them don't exist and some of them aren't exactly as advertised.  One in particular called Taste Bar is advertised as a BAR with small plates that show off the best food on the ship.  Um.  Taste Bar is a CART only open two nights on the cruise, and on those nights they serve ONE dish which is about two bites and you have no clue where on the boat you can get more.  Nowhere to sit, no drinks, nothing.

Each morning we'd wake up pretty early, do something physical (that is not a euphemism, we really worked out), do breakfast, then figure out our day.  The early fitness classes on the boat were FREE, and we paid one day for a yoga class, which was great.  Yoga while rocking = core workout!  It was really fun, and great to have time to just exist together in a calm manner but still take care of ourselves.   The fitness center looked out over the water and I'm really onboard with treadmilling with a view.  Need to suggest that to the gyms I work in. 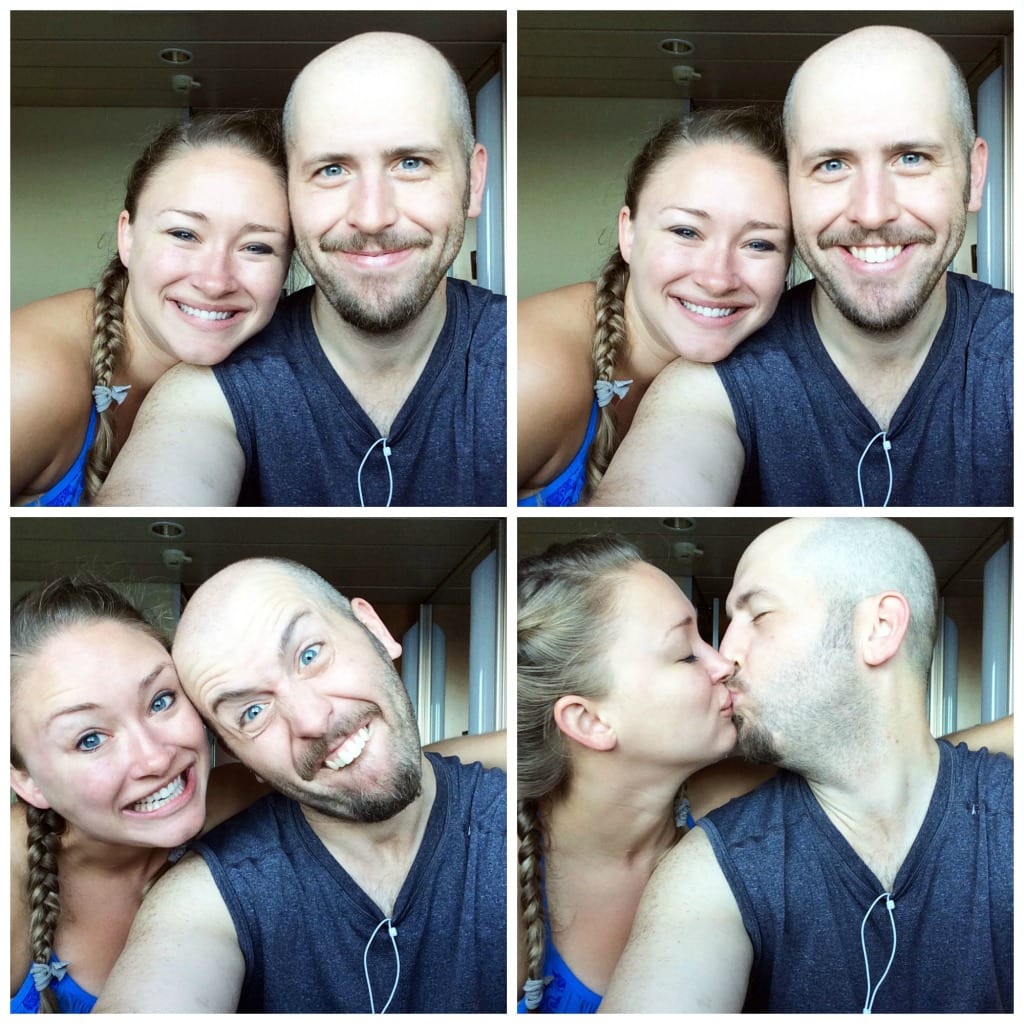 While we were on the boat we spent lots of time playing trivia because we love trivia and they had it every damn day, which we loved.  We also enjoyed the bands around the boat - all of them were really good and it was fun to talk to them and hear their stories - it's really interesting to hear how people end up working in such a specific job.  We also gambled a little bit, but after donating about $75 to the casino we called it quits.  I love gambling GAMES, but losing money isn't really our thing.  One night I sang live karaoke because why not, you know?  They asked me if I'd ever played with a live band before and I was tempted to say no.  There was also a comedy show every night, and the ones that we went to were super duper silly and funny. 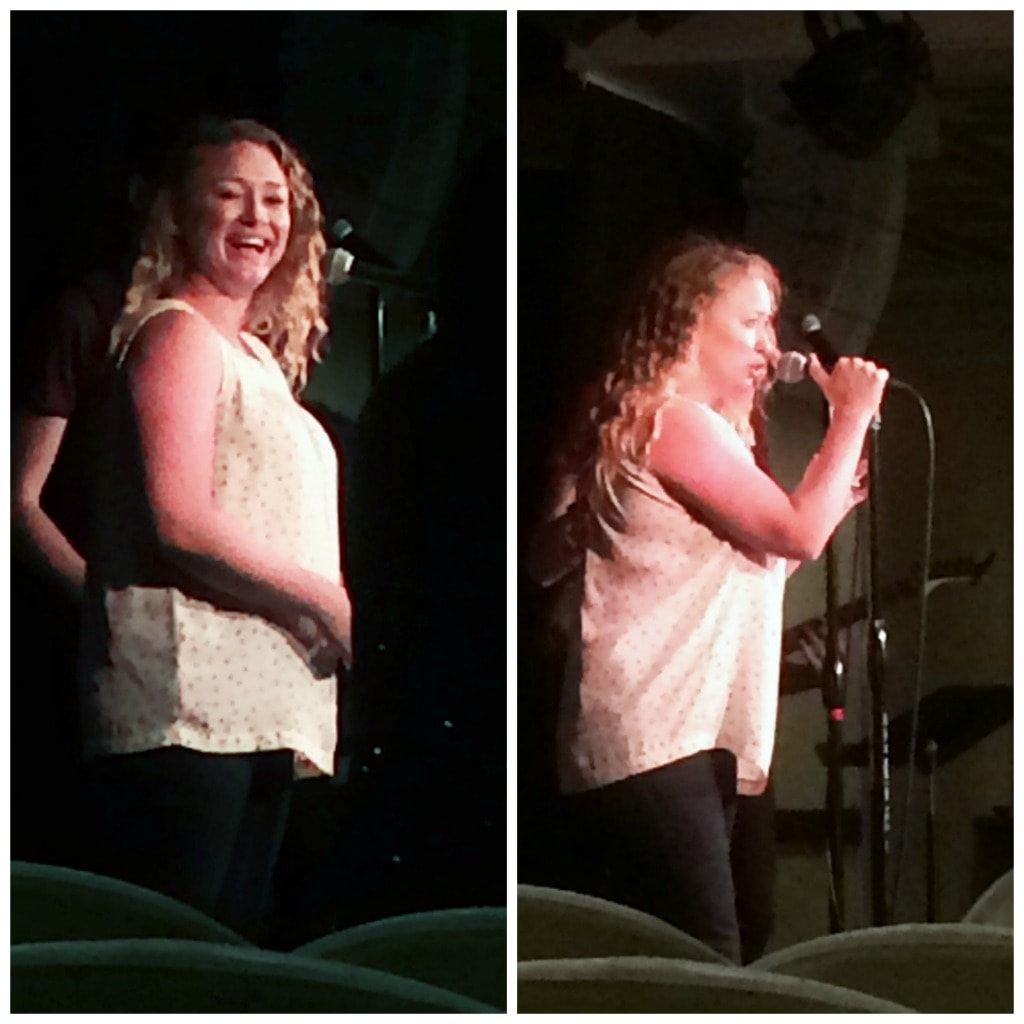 I would very much like to know what is happening in this picture.  I'm envisioning Jack teaching Rose how to spit, but that really wasn't what was going on. 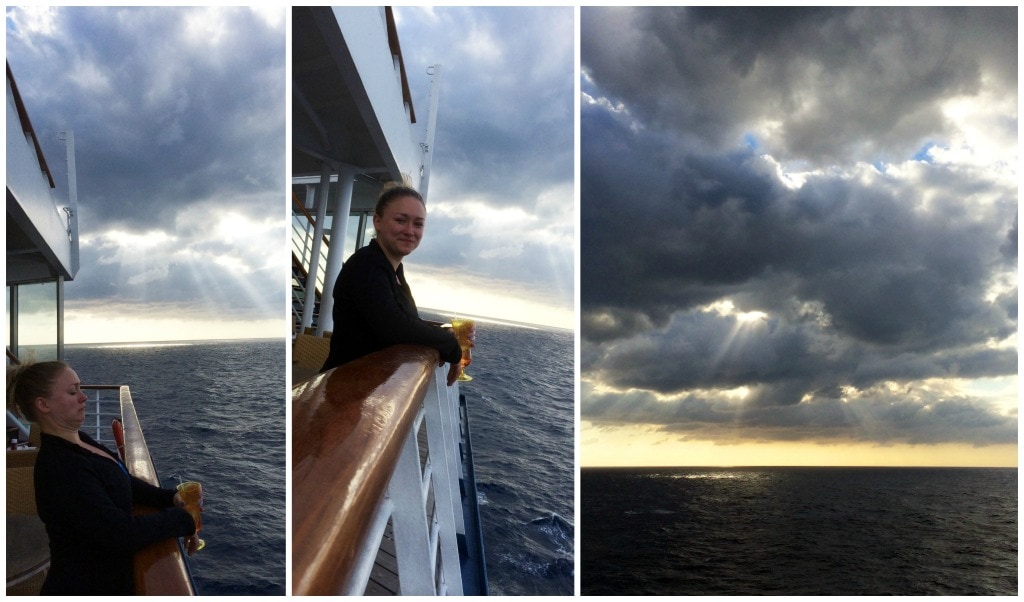 The weather on cruising days (not when we were docked) was nice but not terribly warm.  We did a bit of laying by the pool, but in general it was a bit chilly for that.  There was only ONE pool and a water park, which seemed a little scarce to me.  To be fair, the only other cruise I've been on was a Disney cruise and it was GREAT and a much nicer boat - Fantasy is 25 years old but was the only one leaving from Charleston when we wanted to go on this trip, so it was what it was.  Luckily, the weather in the Bahamas on days we were off the boat was amazing. 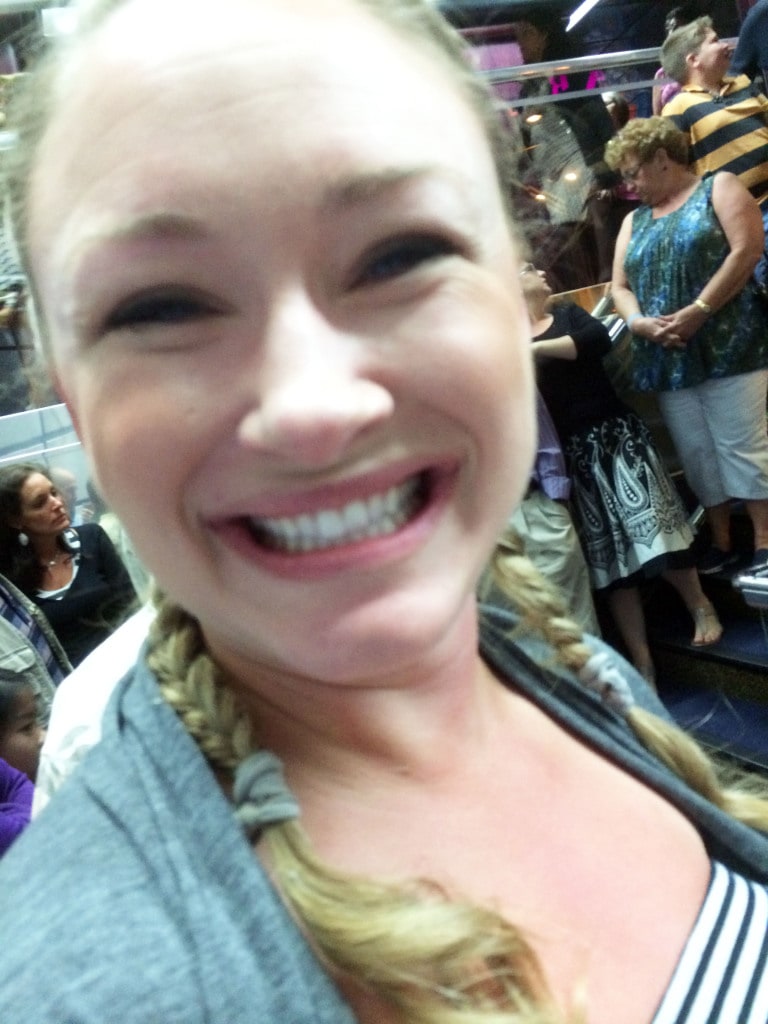 Dinner and other group activities are probably the weirdest thing about cruising, don't you think?  This is what it looked like waiting in line to get to dinner each night. 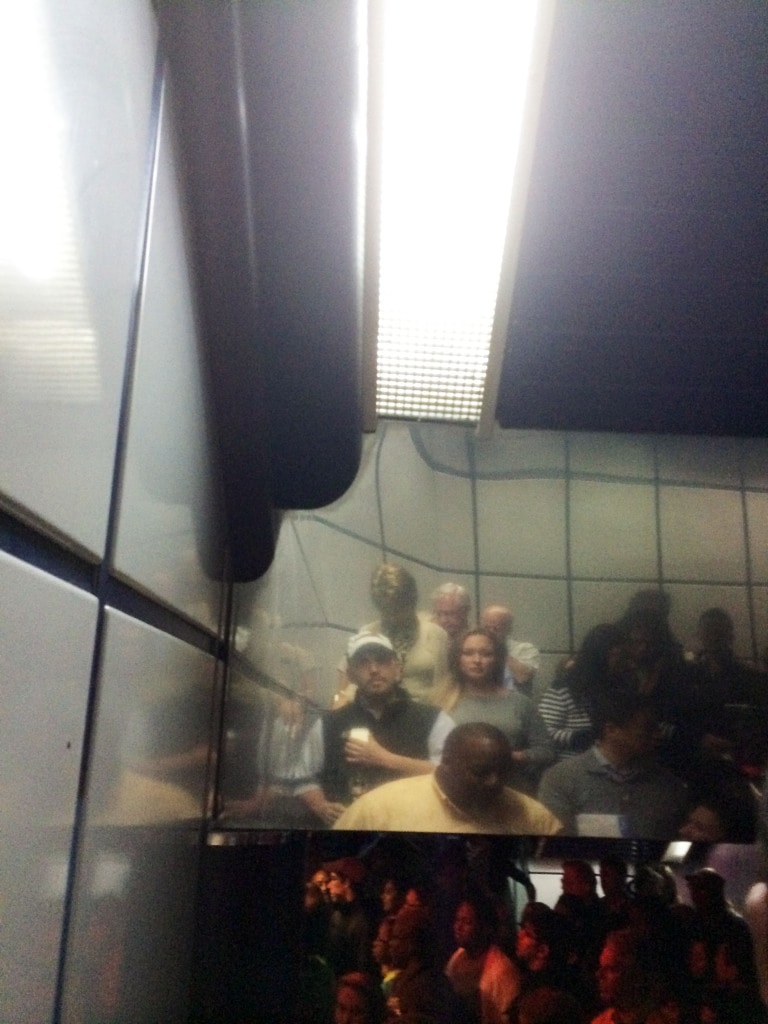 Carnival has a program where you can eat when you want and try to get a two-person table, but it's hard to get it to so we just went with the regular assigned table dining option.  Our tablemates were perfectly nice, but they were really different than us so besides discussing the boat, the food, and what we'd done that day we didn't have a ton to talk about.  We skipped dinner two nights in favor of the 24-hour thin-crust pizza place that we both actually really loved.  The food in the dining hall was good, and the best thing Jay had was a vegetarian Indian dish one night that included 3 curries, a few condiments, rice...it was very sexy.  There was a lobster tail night too which was obviously the bomb diggity.  Also every night at dinner we got our picture taken, and then Jay got yelled at for taking a picture of the picture that was displayed the next day. 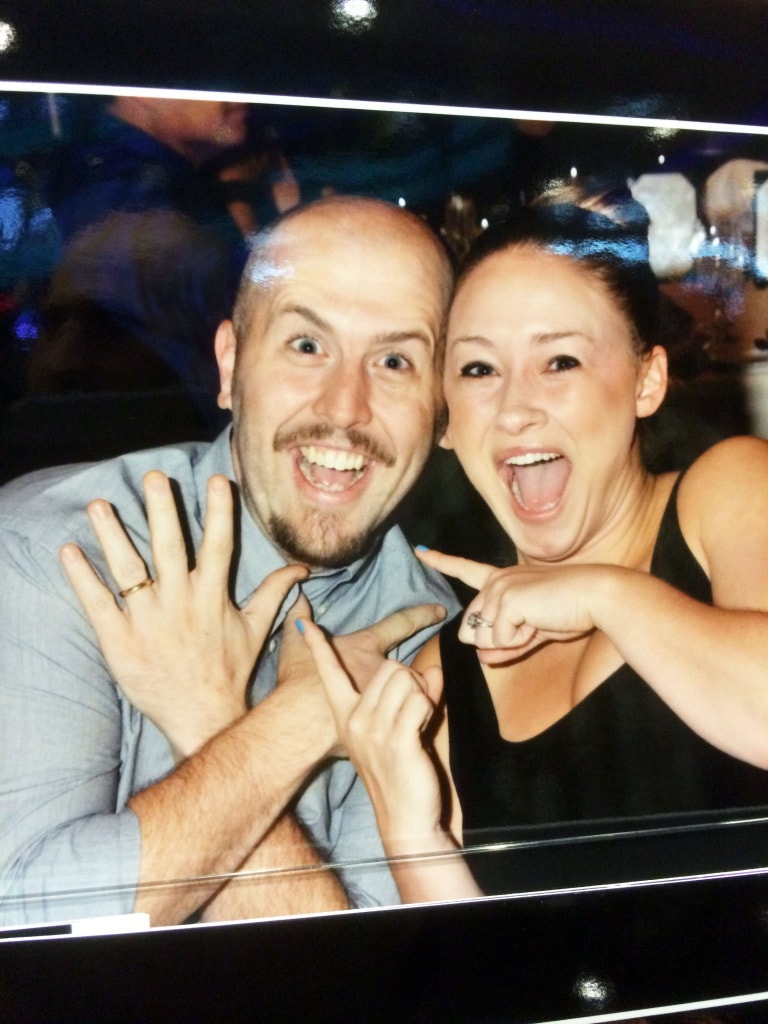 Apparently the photogs have the rights to our face?  The first night our pic was FEATURED for us being dumbasses, so we got to take it for free.  Boom. 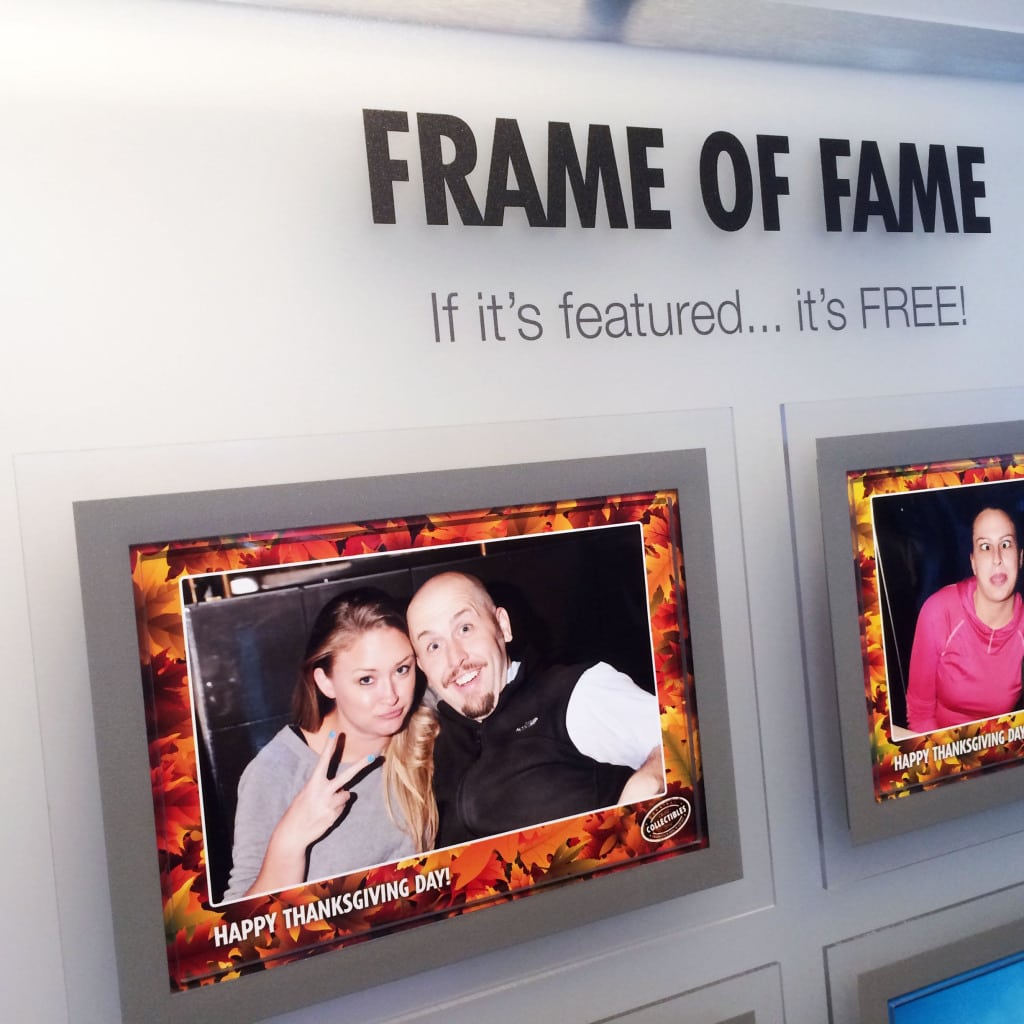 I'd love to know your opinions of cruises - good, bad, ugly.   People seem kind of polarized about them, which I get.  They're not for everyone.  For us, the affordability and inclusivity of the trip was great, BUT you have to be ok with the fact that, frankly, other poor people and all that that entails will be on the same boat as you.  There were some CHARACTERS on this boat, and while none of them made our fun any less, it is strange to see people just LOVING the waiters dancing around instead of rolling their eyes.  Jay's opinion on the subject was a little more harsh - I think loud drunk rednecks and kids get to him more than they do me. 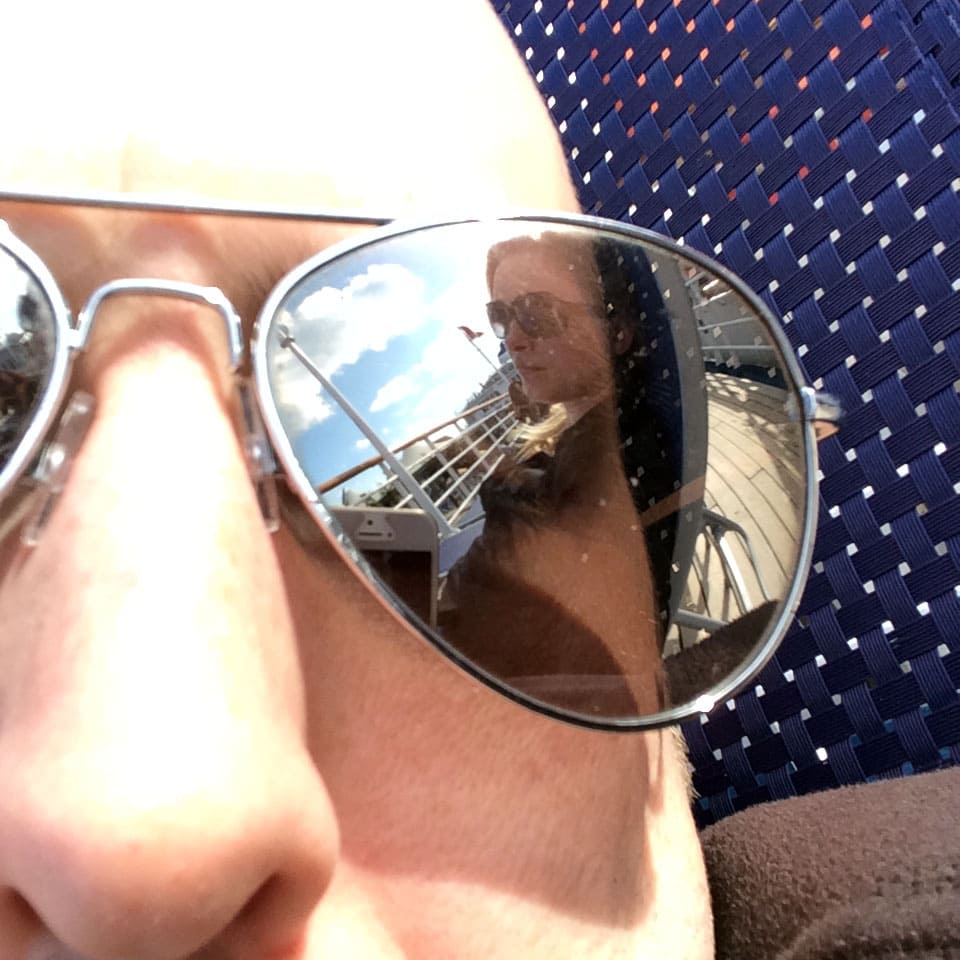 Carnival itself was a good company and the staff was great, with the exception of forced tipping.  After a few nights on the cruise you are all of a sudden charged $12/person/day for tips that they don't tell you about.  The tips supposedly go to the dining team and room team (the same people take care of you every day) but...I just couldn't.  They drop a letter under your door saying that they've charged you this money but it's at your discretion, which seems contradictory, no?  So I marched up to the front desk and got it all refunded, thank you very much.  We tipped a lot in cash, and I felt better about that than the forced tipping, nice as the staff may have been. 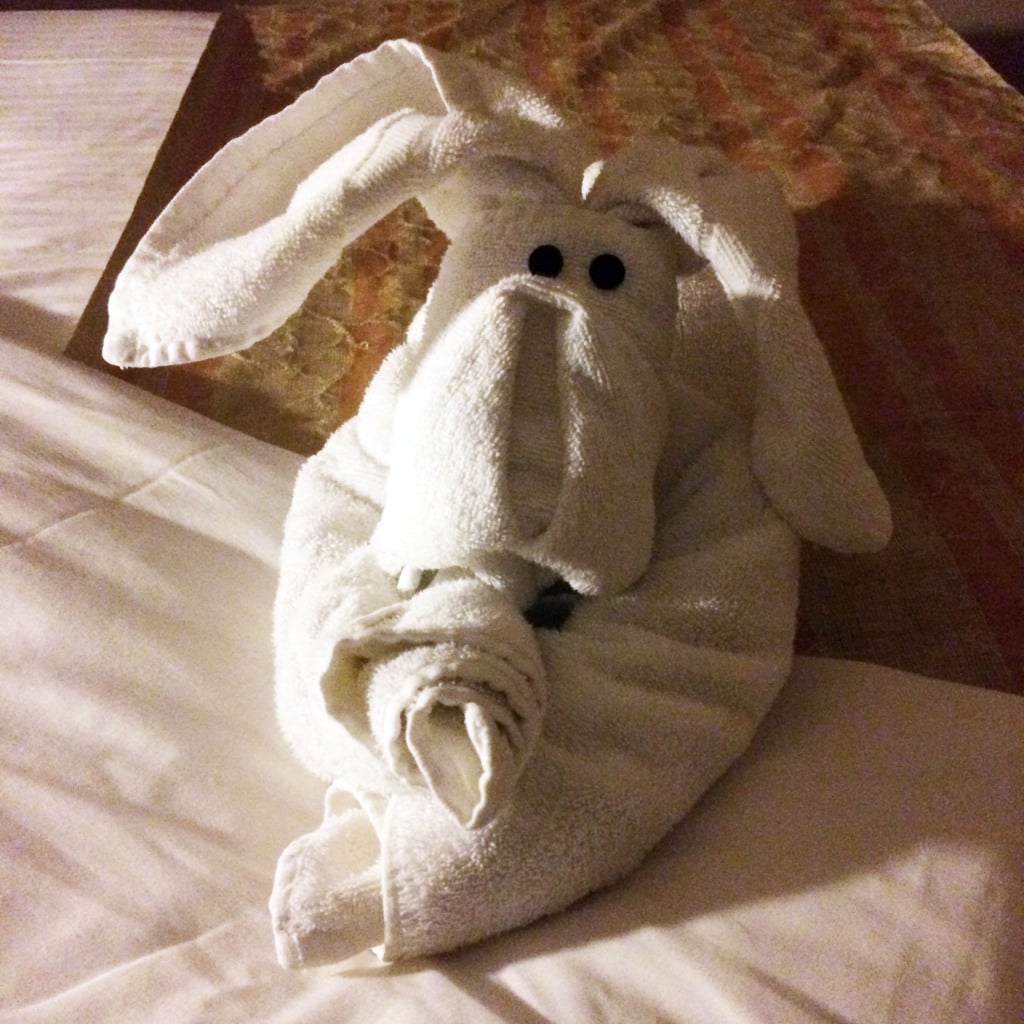 We actually talked a lot at the beginning of planning this trip about asking other friends to join us, and I'm SO glad we didn't.  We have great friends, but it was really nice to have forced time together.  It of course didn't feel forced at all, but we make a TON of plans here, and when we are together we're usually staring at our phones like good little millennials.  Having no cell service, no internet, and no friends was probably the best thing for us at this busy time of year.  It's GREAT to have no plans and no chores and no obligations to your adult life.  While I don't know if we'll cruise a ton in the future, I think it was eye-opening to us how much we need that time together. 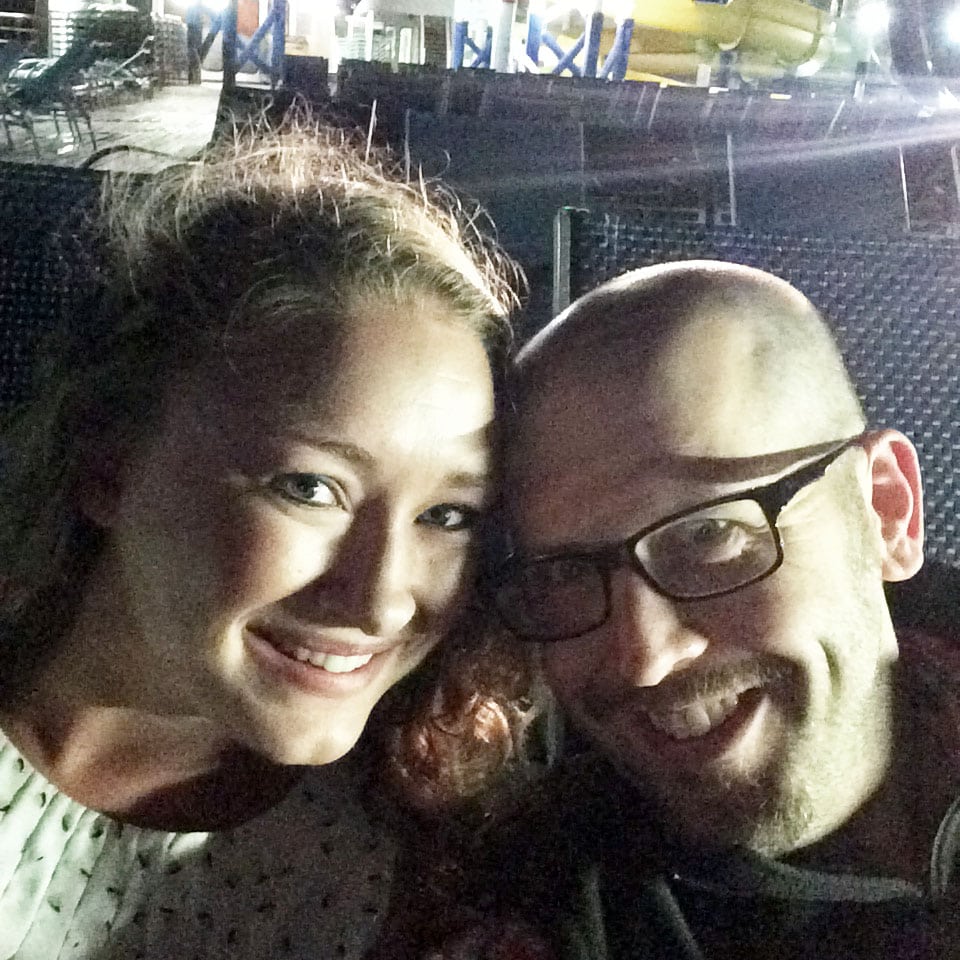 And we were in the Bahamas for 2 days!  That's it's own story that involves blood and drug pipes and mopeds.  Seriously.