Because literally no one that I know has time to make dumplings this time of year, and I know people who cook a lot. I cook a lot! 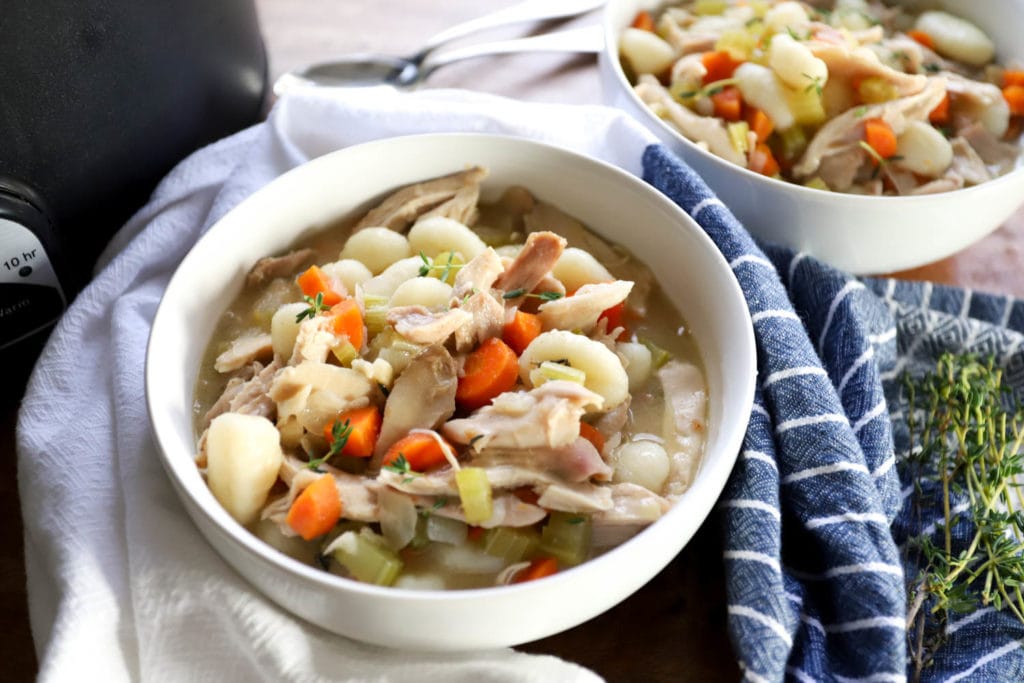 But sometimes cooking to eat is different than long laborious project meals, which are SO much fun but also this time of year maybe not so much. BUT (imma see if I can start every sentence with that word), we still obviously want the food that tastes like it took 8 hours and a touch of your sanity to create, you know? At least I do. Food that cooks for a long time tastes wonderful, has deep flavors, and is so comforting when it's a stew or soup like this is.

Enter, this: We take a TINY bit of effort by using bone-in, skin-on chicken which cooks beautifully in the slow cooker without becoming dry or tough. Shredding the chicken takes all of 10 minutes, and is probably the most laborious part of this entire dish. We more than make up for that effort with packaged gnocchi which, guess what, are dumplings. The idea to use them was Jay's and it was an inspired one. They cook for about 30 minutes at the end of the cooking process, and hold up so well with the veggies, chicken, and velvety sauce. Beck loved the idea of this, and guzzled some of the soup, but refused to touch a carrot or piece of celery because they were "together." Apologies, princess.

Crazy toddler preferences aside, the flavors here are mild and familiar, another win for this time of year when there might be some not-as-adventurous eaters around your table. The perfect meal, really.

END_OF_DOCUMENT_TOKEN_TO_BE_REPLACED

...or for anytime of year, really. 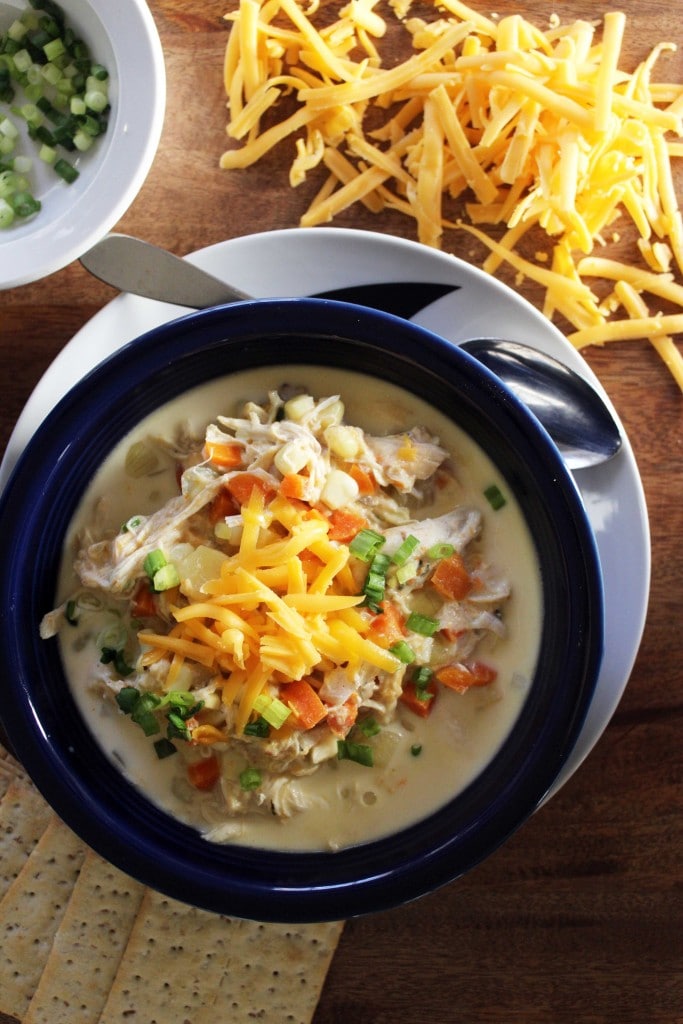 I love the slow cooker, and every year around this time I start using it a bit more. I like it year-round, of course, but something about the cooler weather makes me crave really warm, cozy foods. To me it's not the same as cooking a meal on a stovetop, something that has been cooking for hours and hours somehow feels more suited to the season, better able to nourish and fulfill us in ways that food does that has nothing to do with just your stomach. Maybe it's that the whole house smells good, maybe it's the delayed gratification, who knows.

We've had some downright dreary weather here, for 3 days so far and a few more expected, and so super cozy food is all I'm in the mood for right now. I had some beef stew over egg noodles last night at a dinner meeting that was just so perfect for the weather, and it got me thinking about other slow-cooked meals that I love. These are all made directly in the slow cooker, but if you don't have the appliance they could all be adapted for a dutch oven or heavy pot with a few tweaks.

END_OF_DOCUMENT_TOKEN_TO_BE_REPLACED

This slow cooker bbq chicken is so easy and delicious! It's one of our favorite recipes for easy weeknight meal prep and can be used with chicken thighs or chicken breasts - use whatever you have! This can be made with the easy homemade barbecue sauce recipe below or your favorite storebought barbecue sauce!

I've probably mentioned here before that Jay's favorite sauce is barbecue.  A cross between tang and sweet, but he'll use the dark red bottled stuff in a pinch.  I think that stuff is gross (always too sweet, never spicy), but I do like making my own easy homemade bbq sauce, especially in the summer.

This recipe is nothing earth-shattering, but dumping a bunch of stuff in a slow cooker and letting a sauce form while chicken cooks is a killer trick to have at the end of the school year when you're so.close. to the finish line and it's getting warm and no one has any motivation but also you still need to eat dinner, you know?

Weeknight dinner ideas, I'm here for all of them.

So here goes.  Stuff gets dumped in with chicken, you go finish a project that your kid forgot about until just this instant, then you eat a BBQ chicken sandwich because you've earned it.  Add a beer or 4 and call it a night.

END_OF_DOCUMENT_TOKEN_TO_BE_REPLACED

aka your new favorite meat aka IT'S ALMOST CINCO DE MAYO!

I have a few other new things on deck for you this holiday (deck = what Beck calls herself these days), but this is probably my favorite new Mexican-inspired dish this year.  Mainly for the ease + big flavors it creates.  Beer, tomato sauce, and tons of spices make the best drippings, and we toss them with the beef at the end once we shred it.

I also go against my own rule of SLOW COOKER MUST ONLY INCLUDE SLOW COOKER and sear this to almost burnt in a cast iron skillet.  It's not always necessary, but for this application I do think it adds some great crusty bits to the finished dish.

Do you Cinco?  I honestly can't tell you what we've done the last few years besides make fun new Mexican recipes for the blog or for parties.  Going out for the holiday, if you can even call it that, feels exhausting just to plan, but staying in with an entire Crock Pot of beef and case of Corona?  Satisfying.  I didn't photograph this beef as any one dish intentionally.  I made it for a family gathering a few weeks ago and served it with rice, beans, and tortillas with all of the toppings you could possibly think of.  Some people made rice bowls, some people made salads or tacos, but the point of this is that the beef was GONE.  The only thing on the spread that was totally eaten by the end of the meal was this, which is saying something because we tend to make about a thousand times what we usually need for family gatherings, and none of us eat much red meat.

This beef, though, we eat.

END_OF_DOCUMENT_TOKEN_TO_BE_REPLACED

I mean, do you need to know more? 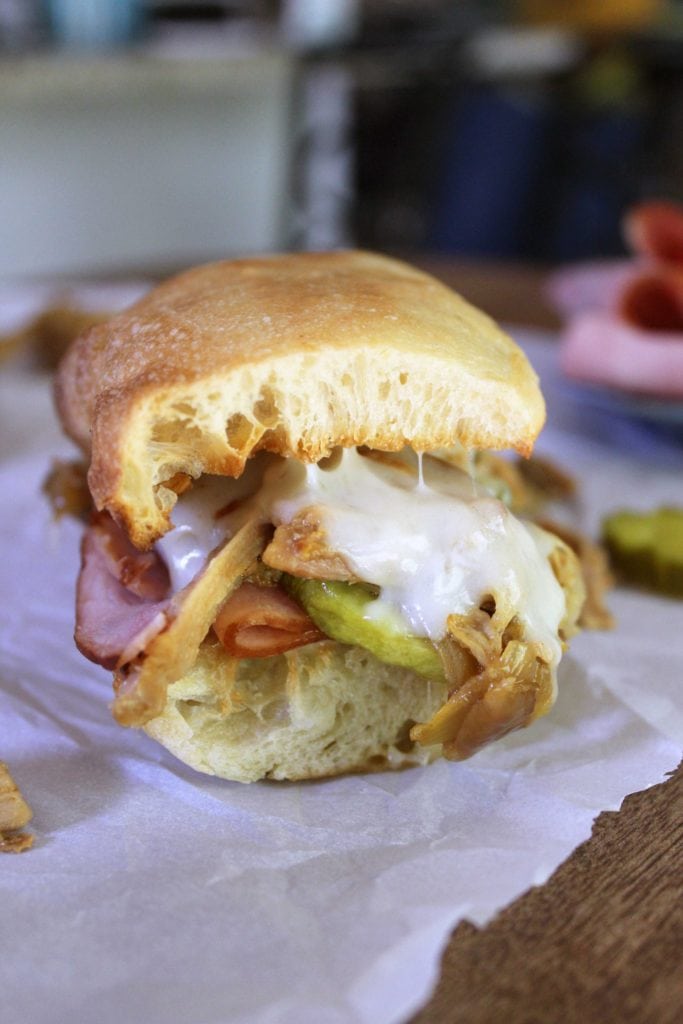 This is another recipe that involves slow cooked meat + onions, but don't be fooled - this is tons different than the pull-apart bread mess we made a few weeks ago, promise.  And, if it were that similar, would it be such a bad thing?

Jay's a big fan of a Cuban sandwich, but I've never made them at home - there are a lot of components and for some reason we aren't really sandwich-making types of people.  Fork food and/or salads with the occasional pizza is more of our jam, for whatever reason.  Probably because I prefer to use a fork for food and not get all messy, and bread is best covered in butter soaking up the remnants of said fork food.  Which makes no sense.

BUT, we went to the market, as we do, and we grabbed a piece of pork shoulder, and went on and on with ideas for it, and landed on this: local bread, local pork, ham, pickles, cheese, onions.  The pork is cooked IN mustard, then everything gets toasted and wrapped in foil so that it gets ooey gooey before you bite into it.  It's worth the slow cooker wait time, that's for damn sure.