This was originally going to be called Lemon Chicken Skillet, and then I went to the store and bought pretty organic lemons and then no one packed them in my bags.  So.  Pears.  Actually turned out better than I'd originally expected, so YAY for lucky things like that!  I'm still kind of bitter about my lemons, though. 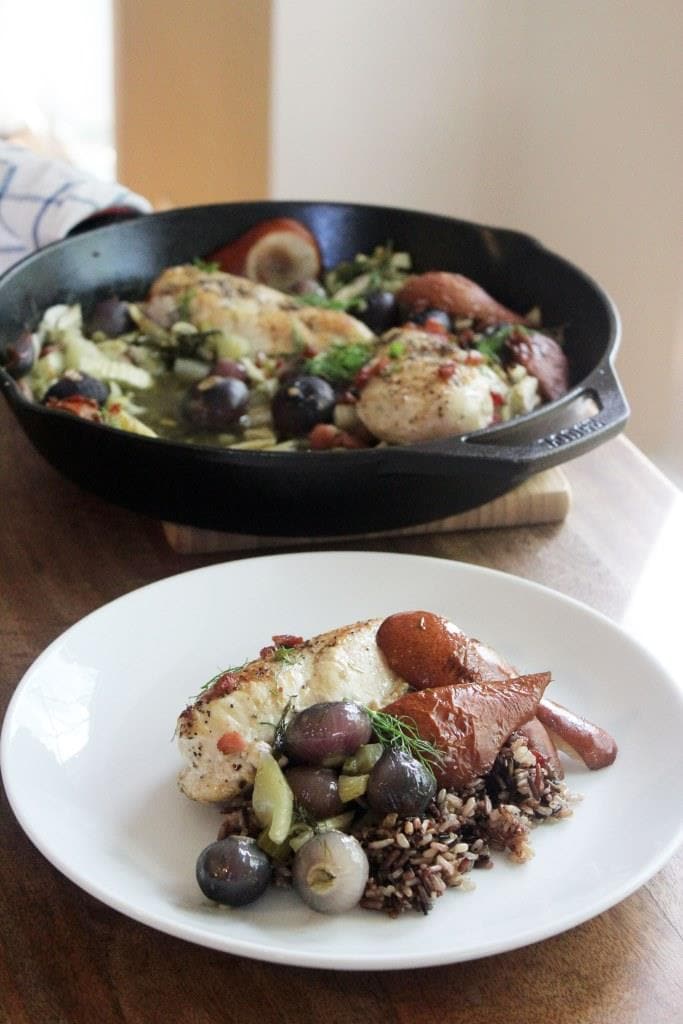 We've had springy weather for a few days now, and it makes me SUPER happy.  I'm a warm weather person, don't even care about the summer when it's hot and muggy (don't quote me on that in August), and ESPECIALLY love these few weeks when we've got azaleas and dogwoods and ALL THE FLOWERS blooming.  Our street is especially pretty right now, and in five seconds it will be gone, so CELEBRATE SPRING! 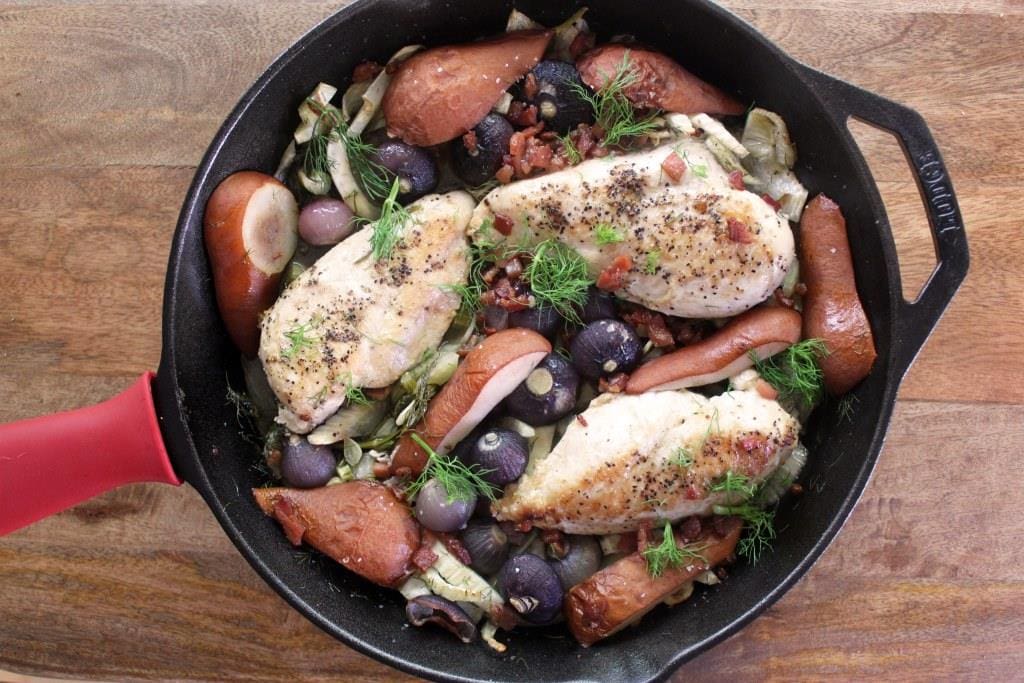 This dish in particular is GREAT for that.  It doesn't take a ton of time to make, but it really highlights simple produce flavors and the white wine/butter combo that we cook the whole nonsense in is just GOOD.  Easy, too!  Let's make it. 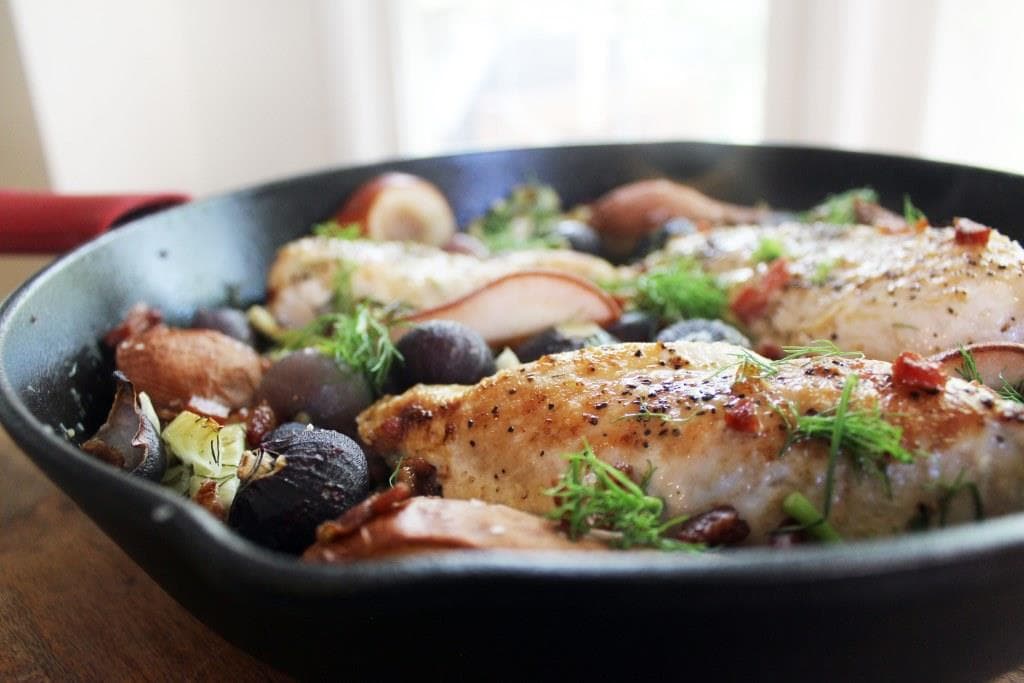 You need chicken, wine, spring onions (or regular onions cut into chunks), a bulb of fennel, garlic, butter, 2 pears, and pancetta.  This pancetta I got at the deli and then diced myself, but you can buy it pre-diced most places, too! 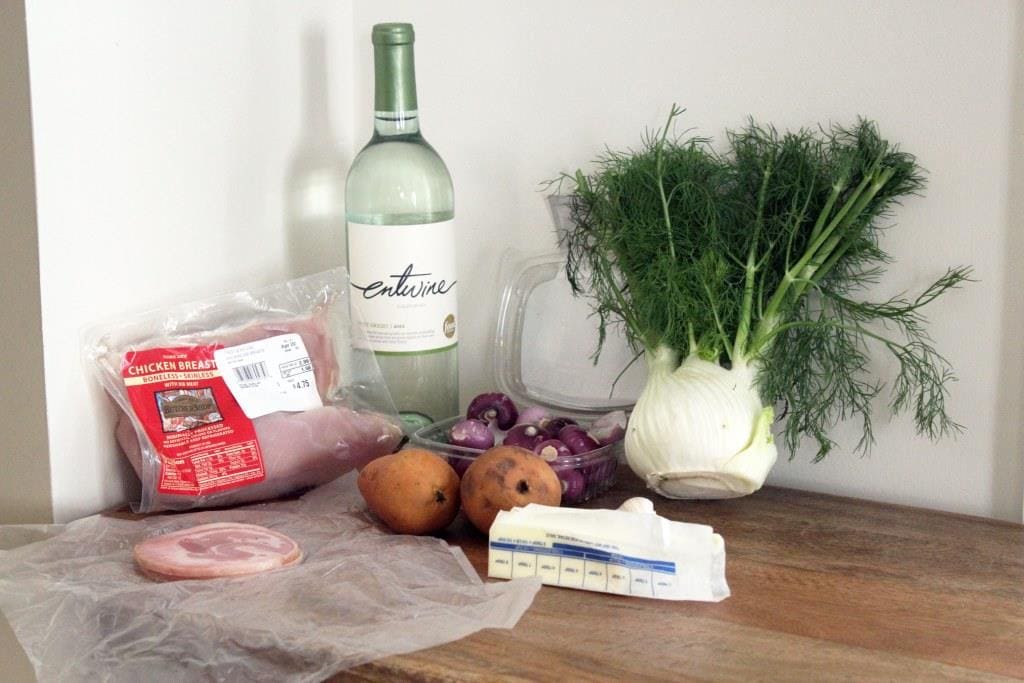 First, we'll work on the pancetta.  Preheat an oven to 400F and a large ovenproof skillet to medium-high heat.  Then, dice the pancetta!  Cut it into strips and then the strips into little bits.  For the sake of "measuring," my least favorite thing, you want 2 ¼ inch thick slices, or about ⅓ cup chopped pancetta. 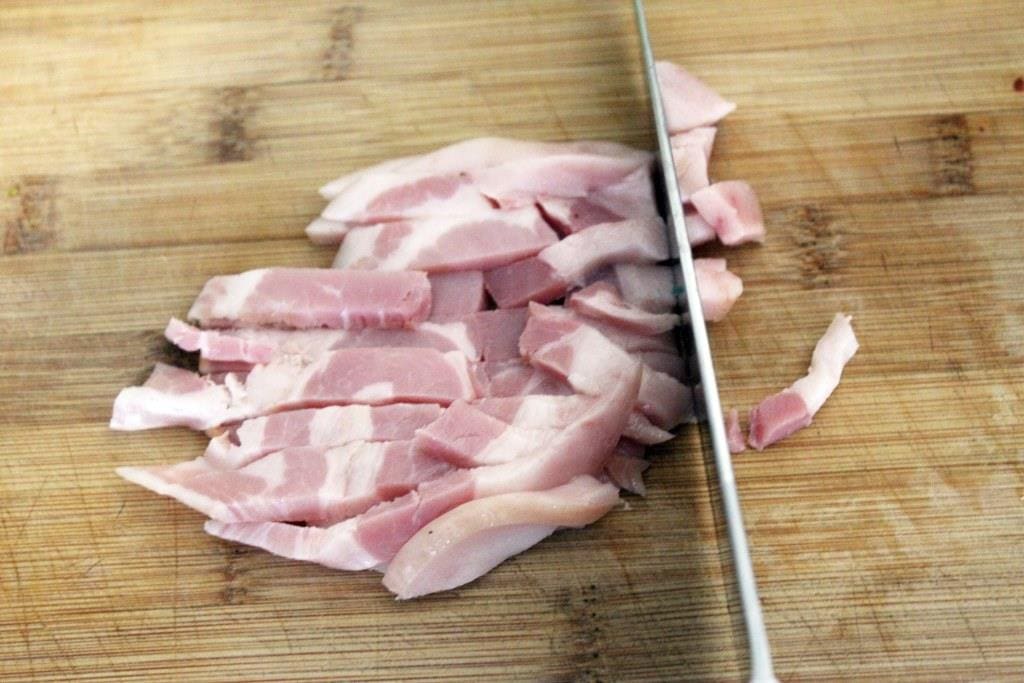 Add the pancetta to the skillet and let it crisp for about 5 minutes until most of the fat is rendered, stirring every once in awhile. 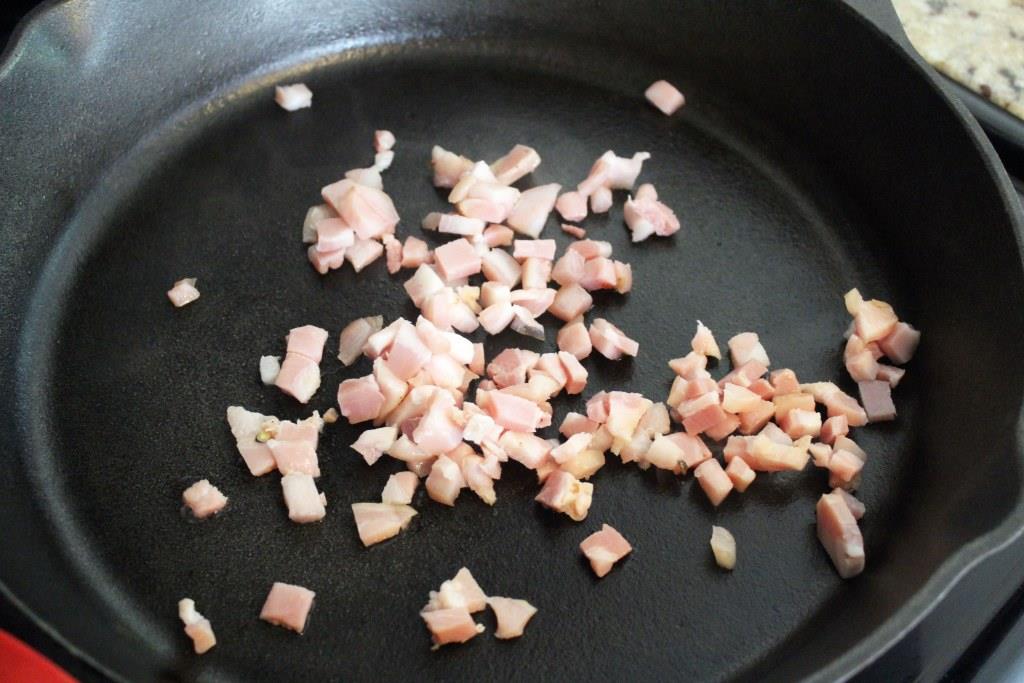 Then, remove the pancetta to paper towels to drain while you sear the chicken. 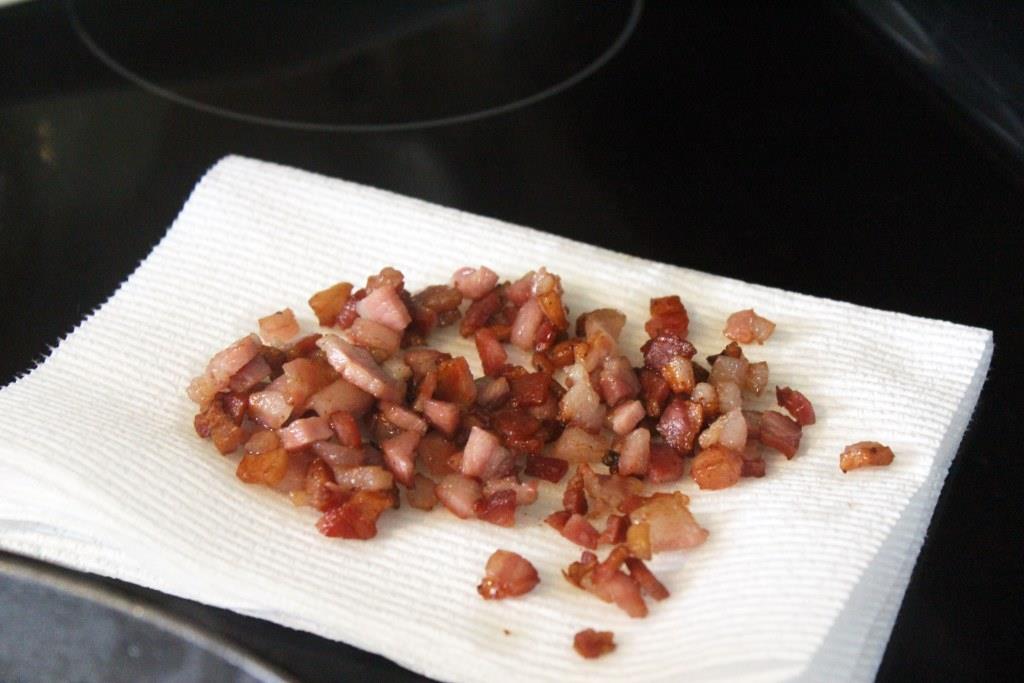 Add the chicken to the skillet and sprinkle it with salt and pepper, then LET IT SIT.  We want a really nice brown crust on the chicken, so don't move it around too much.  Add a drizzle of olive oil to the pan if it seems dry, too. 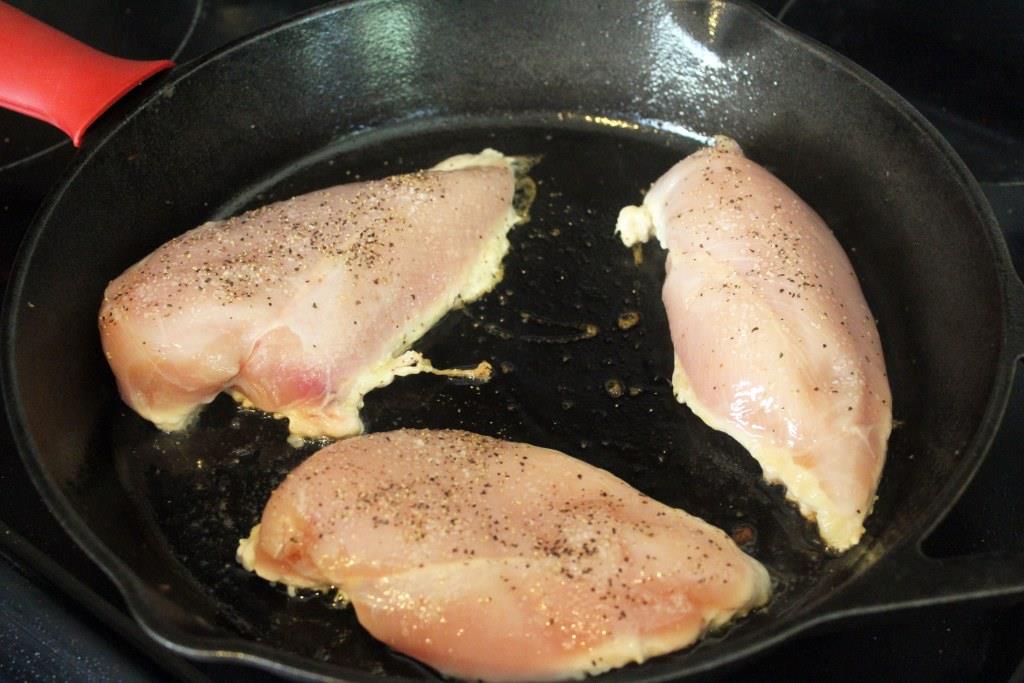 While the chicken is working, let's prep the fennel!  Cut the bulb in half. 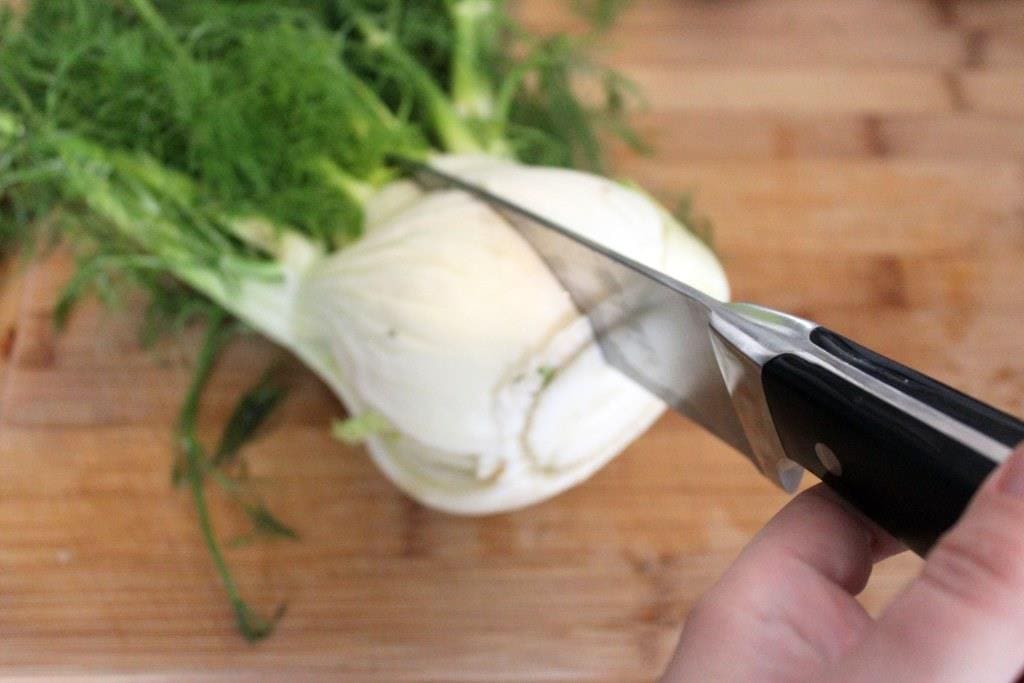 Then, cut the halves in half. 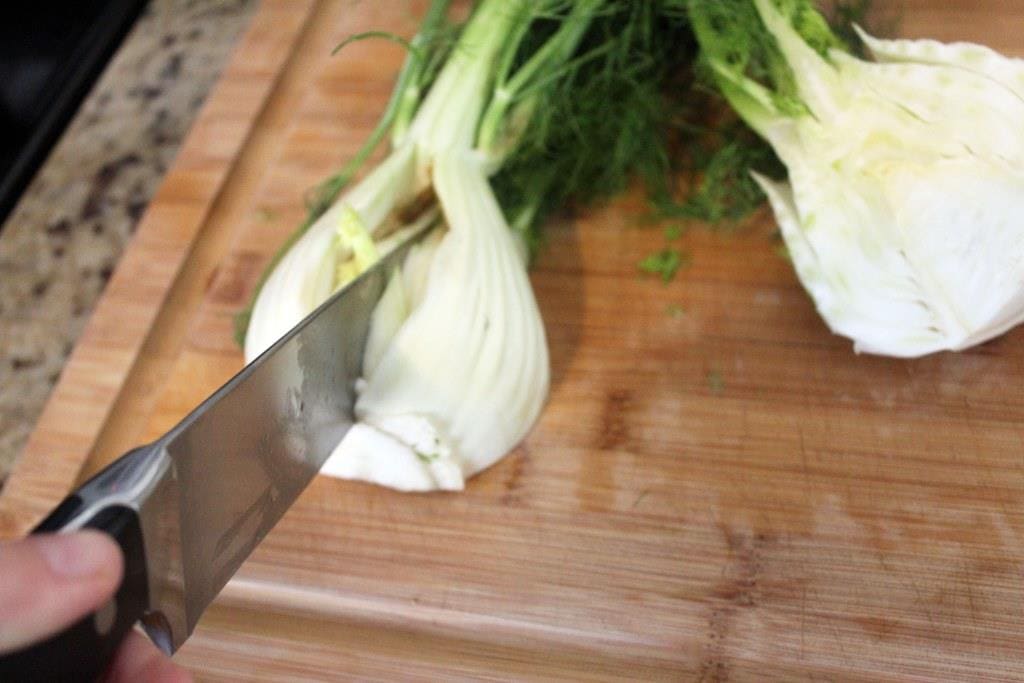 Cut into the core of the fennel on an angle to remove it. 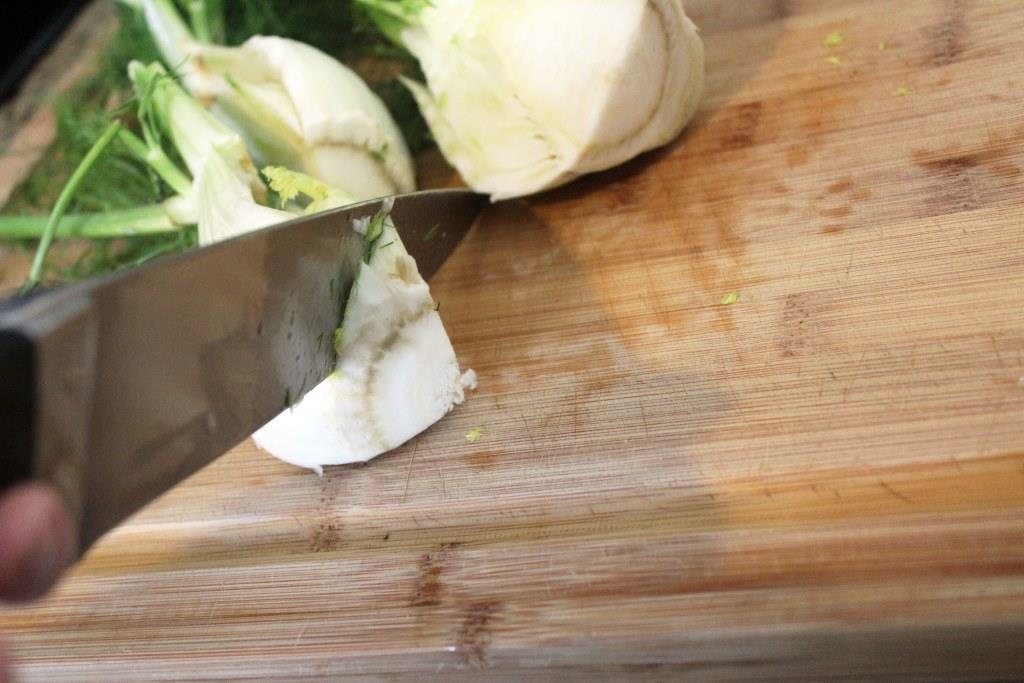 Then, thinly slice the fennel! 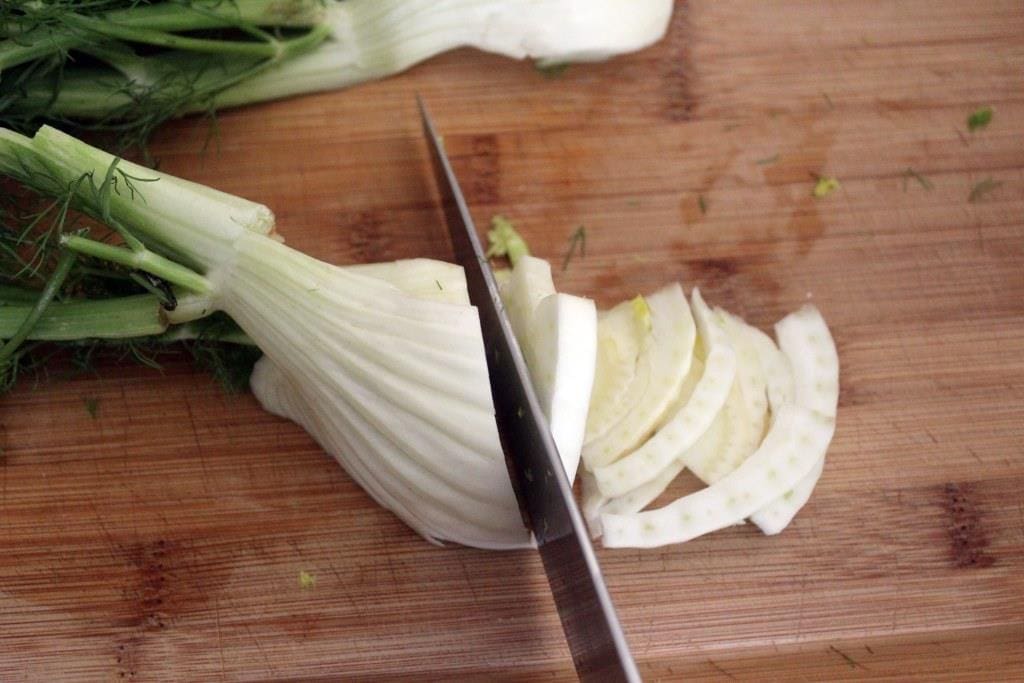 Slice all the way through the white parts and through the thick stalks (that look like celery), but don't worry about slicing the leaves (fronds) or thin stalks, they'll cook down in the oven. 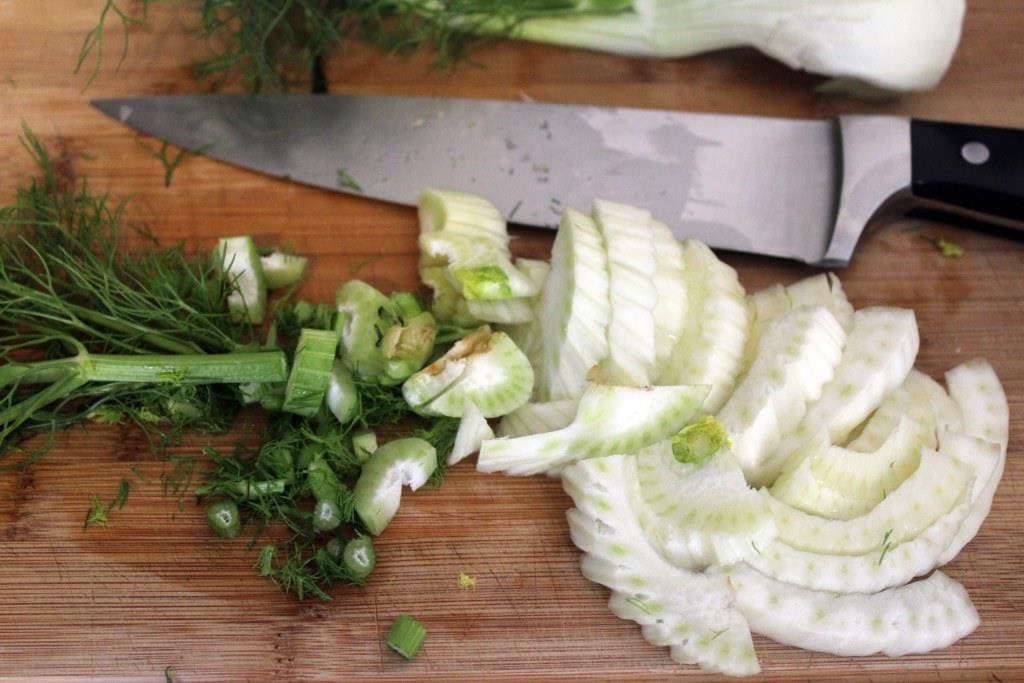 Now, the chicken should be nicely seared on the first side!  Flip it over to sear on the other side. 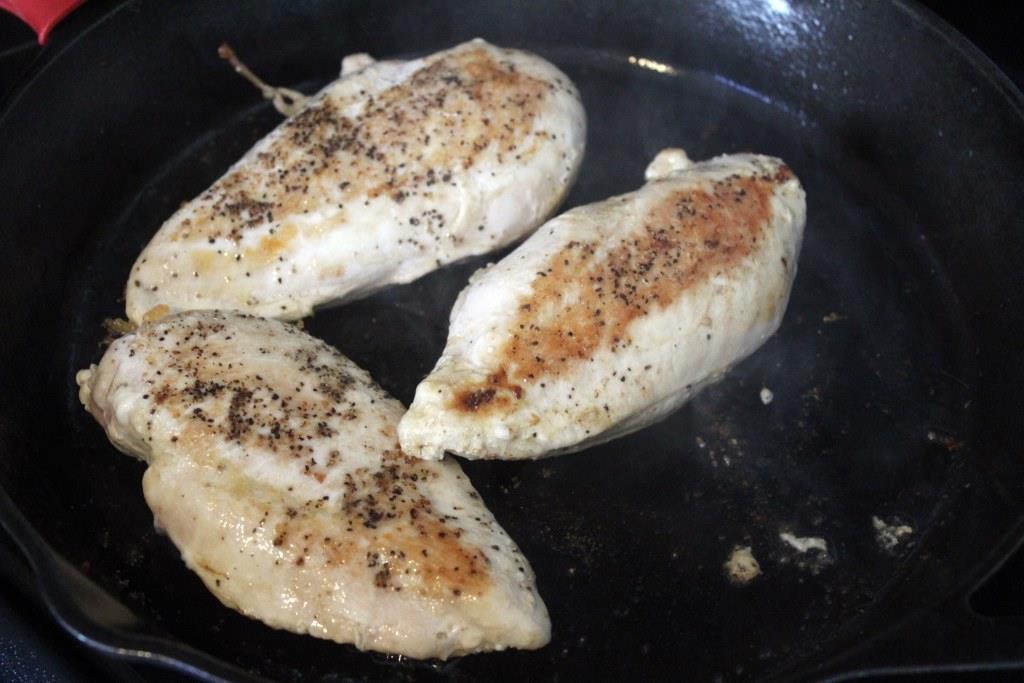 While the chicken is searing on the second side, cut the pear into large wedges (4 wedges per pear, just around the core)... 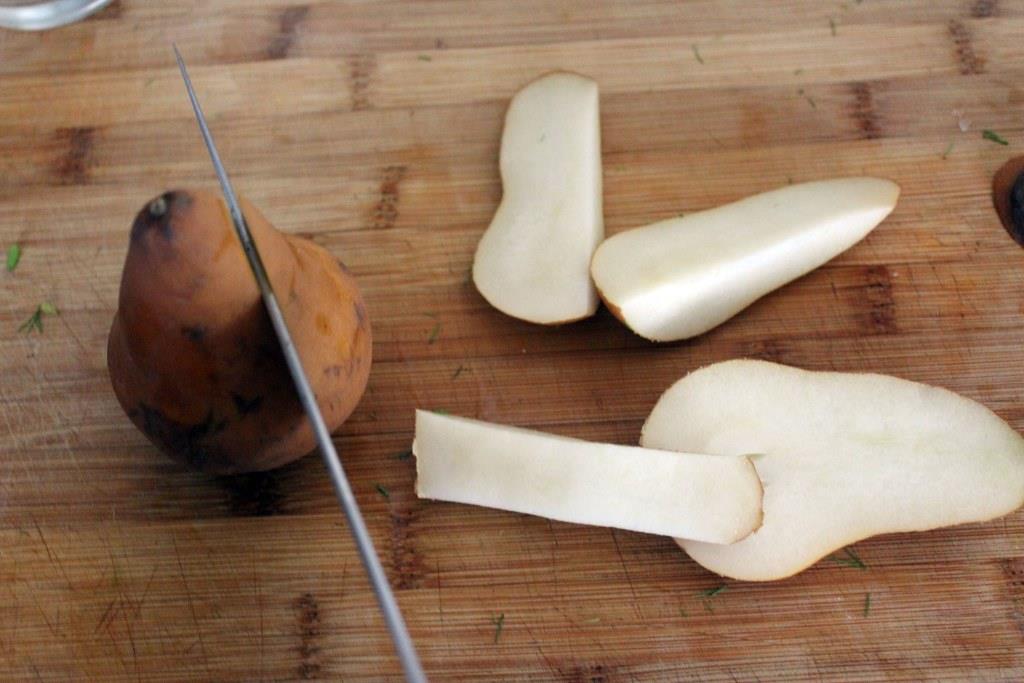 ....and peel and thinly slice the garlic. 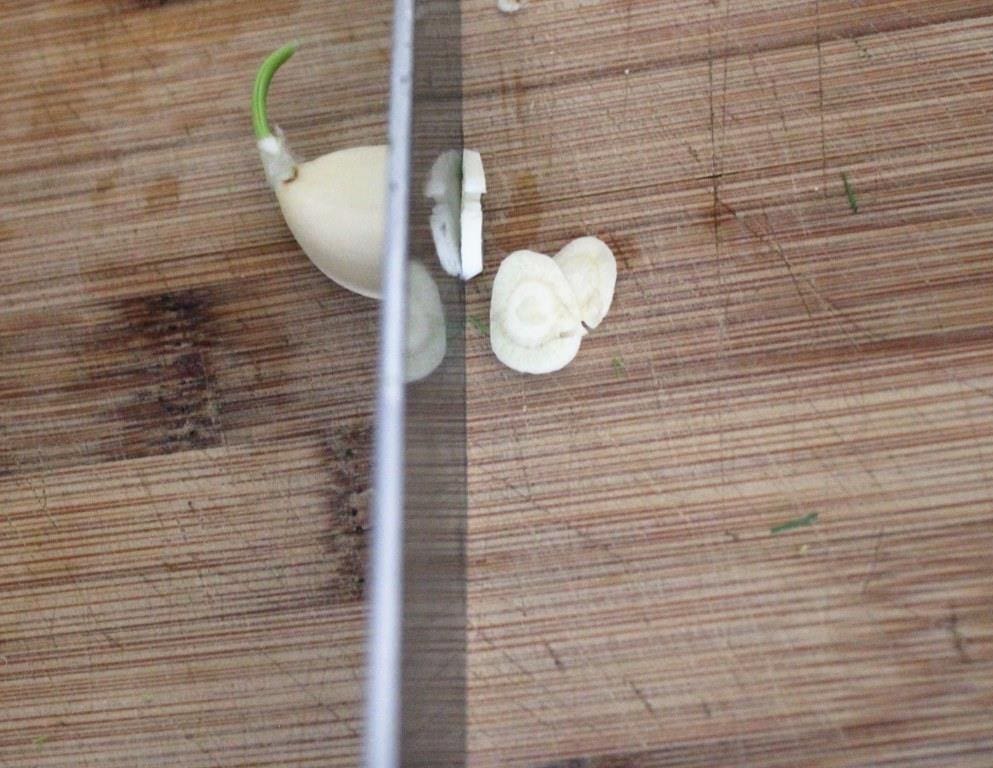 When the chicken is seared, remove it to a plate for just a minute, then add the butter and the wine to the skillet.  Stir for one minute just to get any of the bits off the bottom of the skillet, then turn the heat off the pan. 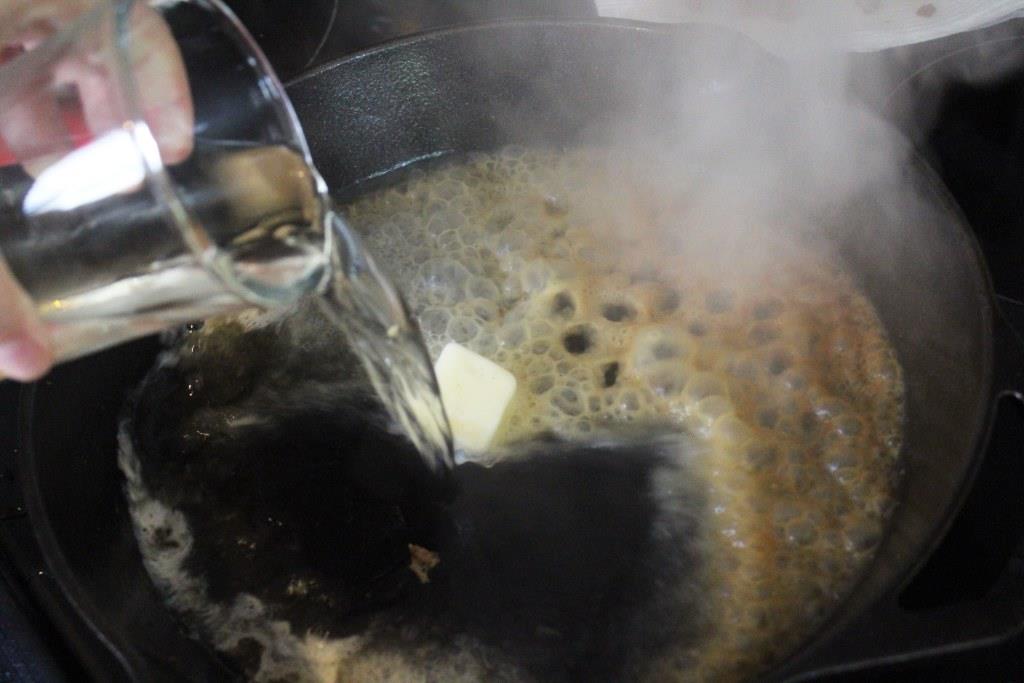 To the wine mixture, add the fennel, onions, and garlic. 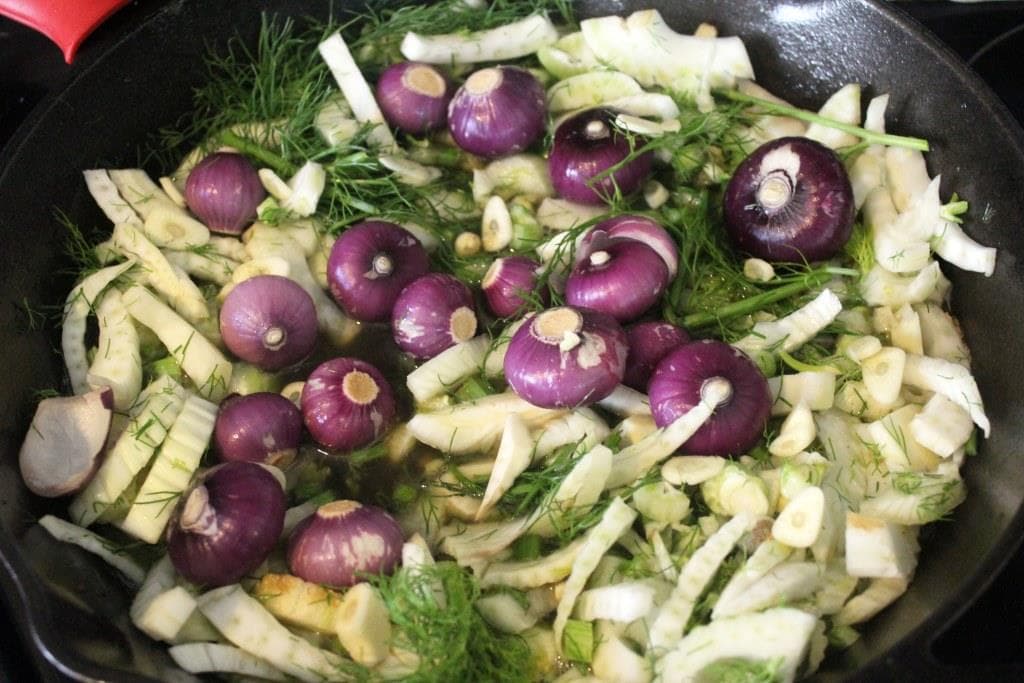 Then, nestle the chicken and pears over the veggies.  Sprinkle the entire pan with the pancetta bits and a little bit of salt. 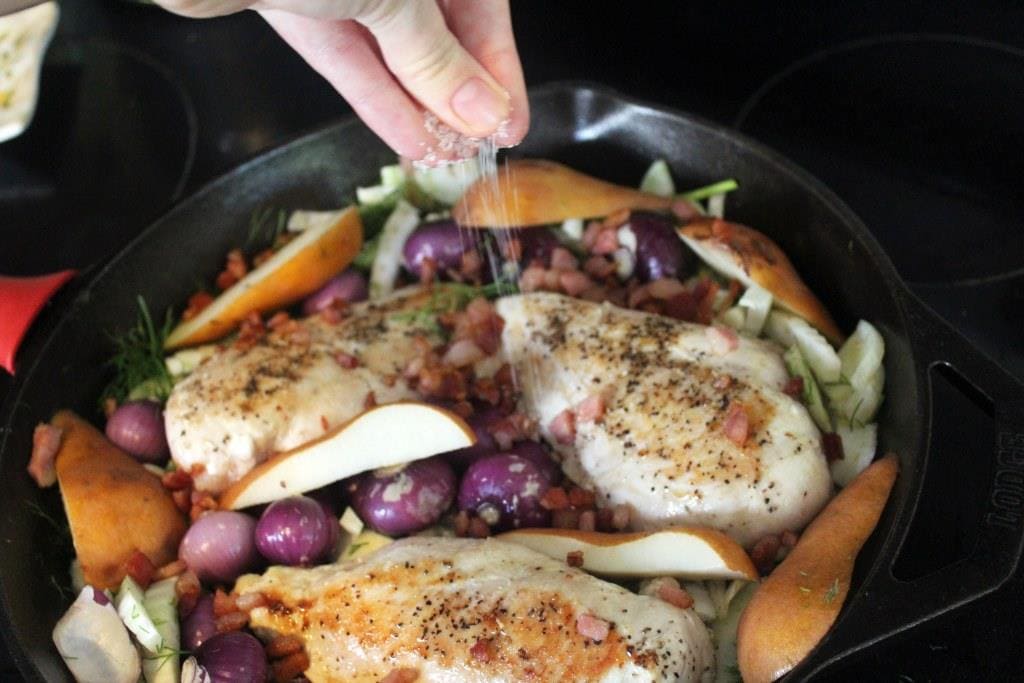 Now we're ready to bake!  You could make the entire recipe up to this point, FYI, then just bake it later when you're ready to eat. 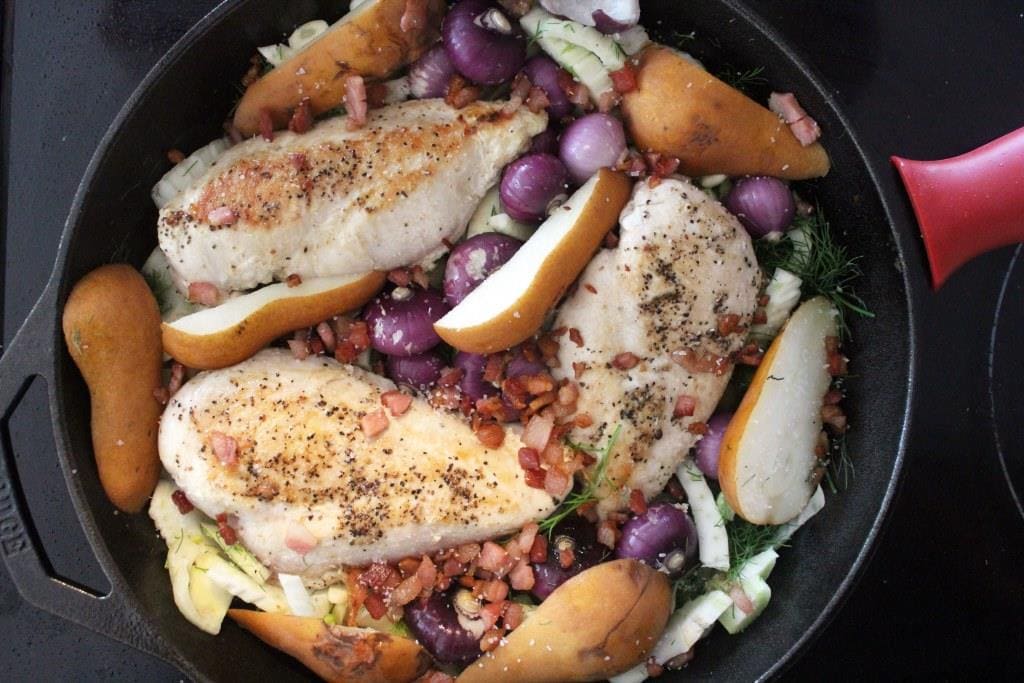 At any rate, when you're about ready to eat, transfer the skillet to the prepped 400F oven for 20-30 minutes.  The baking time will depend on how thick your chicken is, so you might just want to slice into your chicken after 15 minutes and see how cooked it is.  Up to you!  Mine was done in 25 minutes, and my chicken breasts were about 1.5 inches thick at the thickest point. 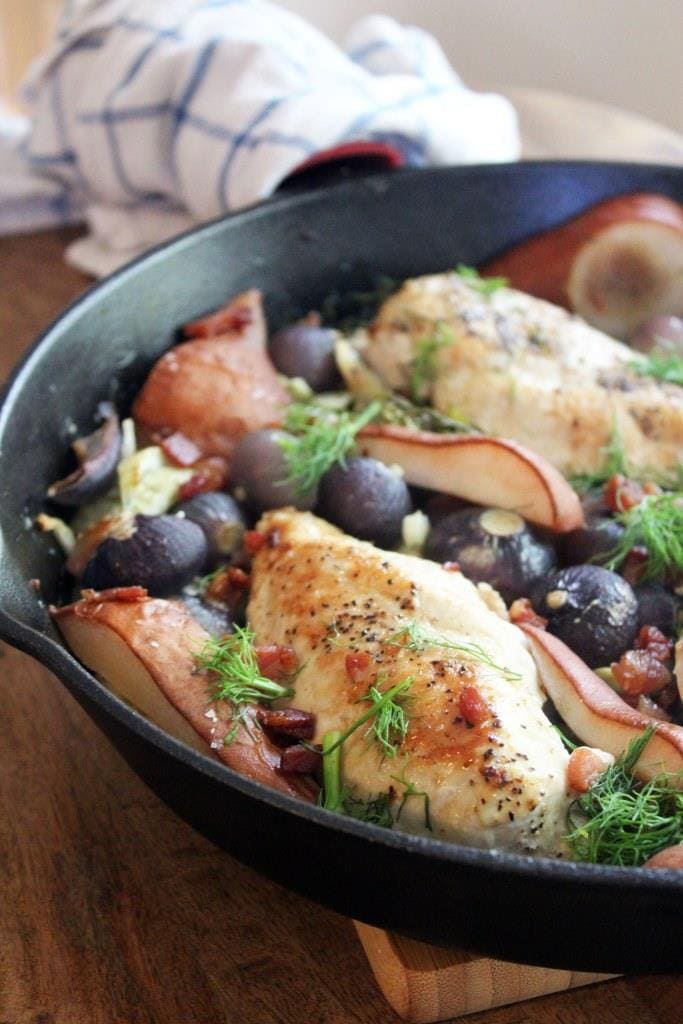 LOOK AT THAT.  If you have any extra fennel fronds, use them as toppers and go. to. town.  So pretty! 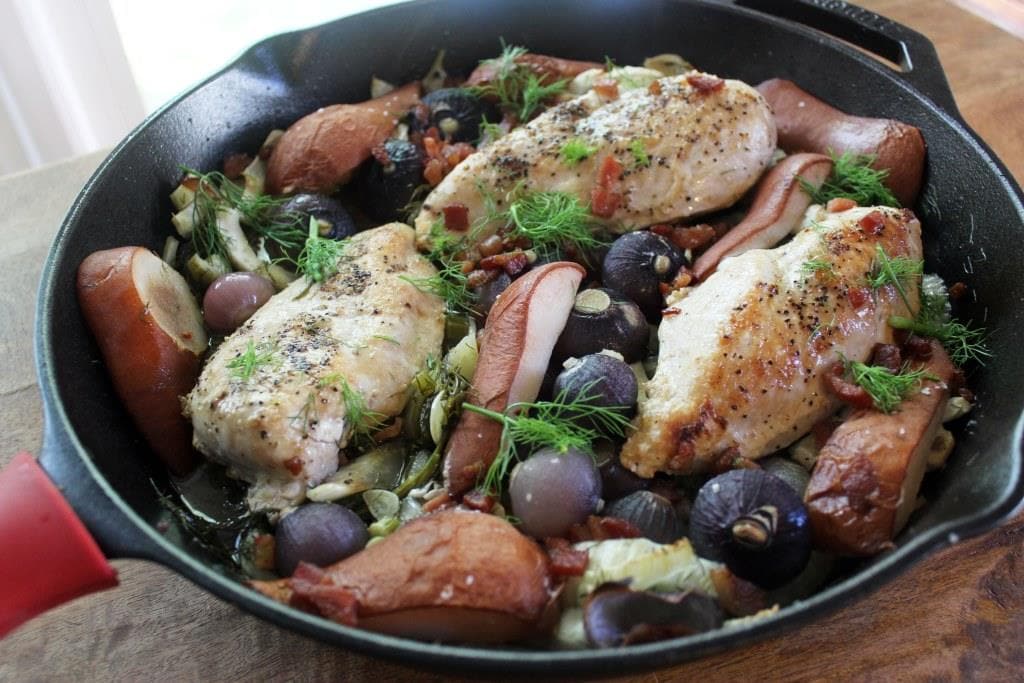 You will absolutely love this.  It's great for spring, and I like this method because you can do ANY flavor combo with the start-it-on-stovetop, finish-in-oven idea.  I've got some more dinners like this coming up, if you're interested.  I served this over wild rice for some extra texture and whole grain action, but just bread for sopping up the sauce would be delicious, or you could eat this as-is for a low-carb or gluten free option. 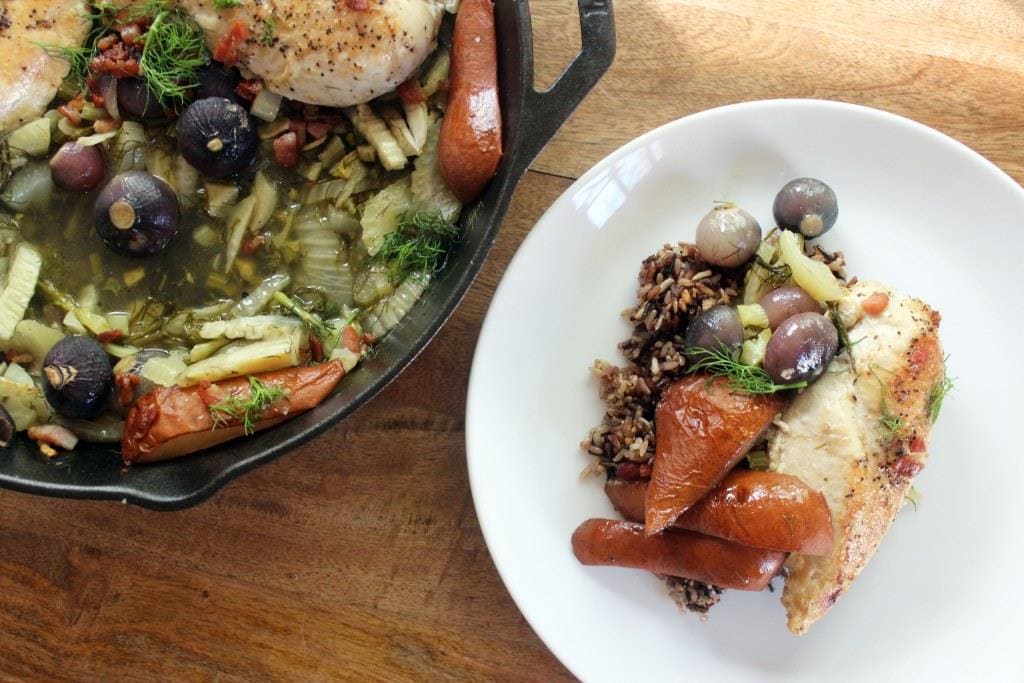 « Something New I Learned About Marriage
Morningtime »