You know how you hear pregnant women whining about how strangers touch their bellies without asking and they feel violated because it's their belly, their fetus, and one really shouldn't go around touching another human's midsection without a clear invitation? 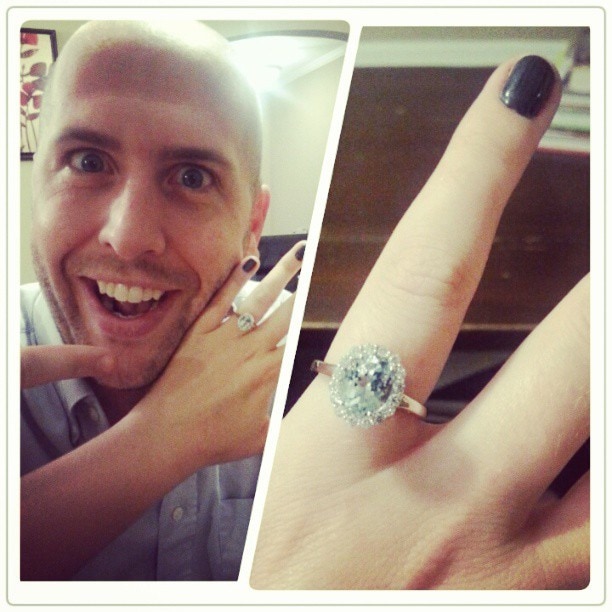 I feel that way about my left hand.

CLEARLY it's not the same, so let's not spark some sort of attack on me via all the pregnant women, or pregnancy sympathizers, or general crazy folks, ok?

I'm just saying.  I feel kind of that way about my left hand.  I blame Facebook for it, mostly.  After we started-ish planning our wedding and narrowing down dates and all that, we sort of just....decided?....to change our relationship status on Facebook to being engaged.

The interwebz exploded, like they do with any relationship status change.  We aren't special, it's just how things are. And, obviously, nothing is real until it's on Facebook (only in my world?  don't say that's not true for you too), so the questions and left hand grabbing started pretty quickly.  Imagine the following in a screechy voice:

The thing is, there was no proposal, and I told you a few weeks ago that we're still working on the ring (on order, btw - yay!!).  The thing about THAT is, it was exactly what I wanted.

That's where I tend to lose people.  We live in the South, where engagements, engagement parties, proposals, and OMG THE RING!! are like CRACK to some people.  Crack, I tell you!

I don't begrudge anyone having the EXACT wedding experience they want.  Huge proposal?  400 guests?  Destination?  BY ALL MEANS PLEASE DO THAT.  I'm the first person that wants to hear all the details, help with the planning, and OMG SEE THE RIIIIING!!

I didn't want that, though.  I wanted my nearest and dearest, and I wanted to plan a fun wedding with the person that I've already committed to spending the rest of my life with.  It's just what works for us - not what I think everyone should want/do.  So, we're having a few small events (but 7 strippers at the bachelor party, Jay'd like me to inform you), some fun times this year with friends, and then in August 2 final parties to seal the deal.  It'll be perfect, and just what we want.

For awhile I felt almost...guilty?  lame...?  that I didn't have some magical story to share with people, coupled by a huge sparkly ring or something.  Like....it's not really real if the engagement didn't START in some way.  Well, it did start in some way!  It started when I got bronchitis that lasted for 16 straight days the third week we were dating, and Jay stayed on the couch in my apartment because 1. we weren't anywhere close to **there** yet and 2. I snored like an old man and 3. I don't think he trusted me that sick to keep a dog alive.

It started again when Jay didn't renew his lease on his apartment last year and stuffed into my teeny apartment with me...and maybe again when we decided to look for houses?  It definitely started when we BOUGHT the house, and some weeks it feels like we start our engagement all over every day - new milestones, new commitments to each other and this little life we're building together.

Also, it's my personal belief that if a man sticks around after a 2.5 week with bronchitis in the first month of a relationship life then he's allowed to be lazy anyway about major stuff.  I'm still making up for that grody time together.

3 months and a few weeks until I promise to stop pestering you with my weird approach to getting married.  You're champs for sticking with us through this.