I am continuing the weekend with food that isn't vegetarian or a salad, SO THERE.  I know it's a thing that Monday we get back to whatever semblance of a health grind we like to pretend we adhere to, but REALLY why not just eat food like this all the time? 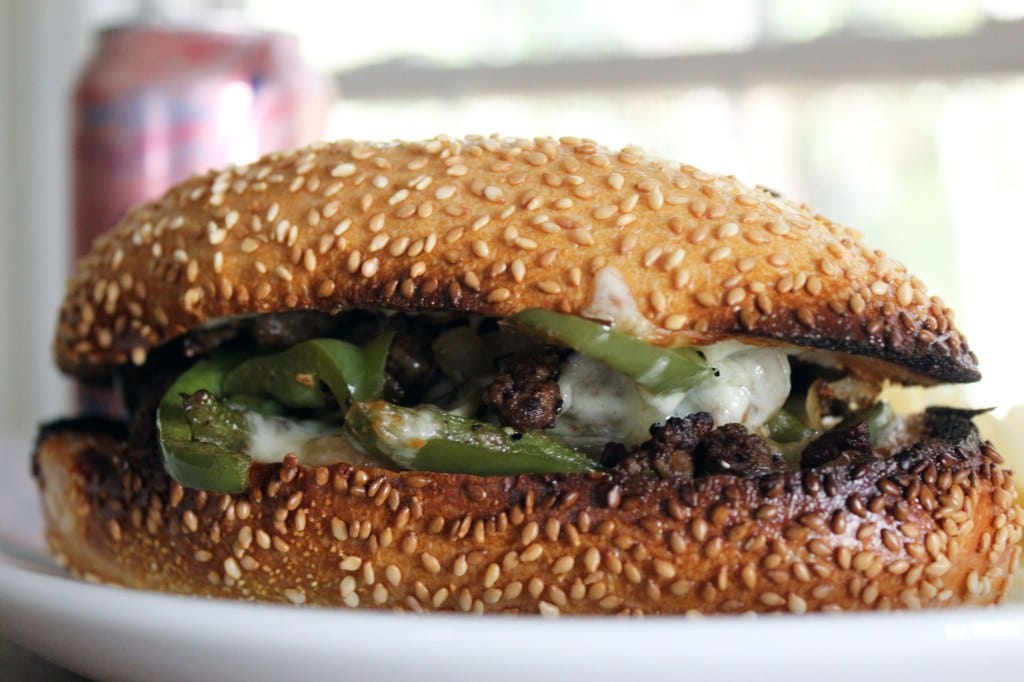 I mean besides heart attacks and diabetes and obesity, BUT THAT'S TUESDAY'S PROBLEM.

You aren't Santa Clause.  You smell like beef and cheese.

Let's make sandwiches.  I love these for dinner because they're a little involved, and if you don't eat chips on the side are nicely balanced with a good amount of veg for the meat we're using.  And 4 slices of cheese per sandwich?  Dairy, my friends.  Dairy.  In addition to sandwich rolls, ground beef, and provolone cheese you'll need a bell pepper, an onion, steak seasoning, worcestershire sauce, and pickled jalapenos.  If you don't like spice skip the jalapenos, but to me the tang of the pickles are what makes a philly work.  The density of the cheese and beef needs to be cut with some acid, so that's what we're doing! 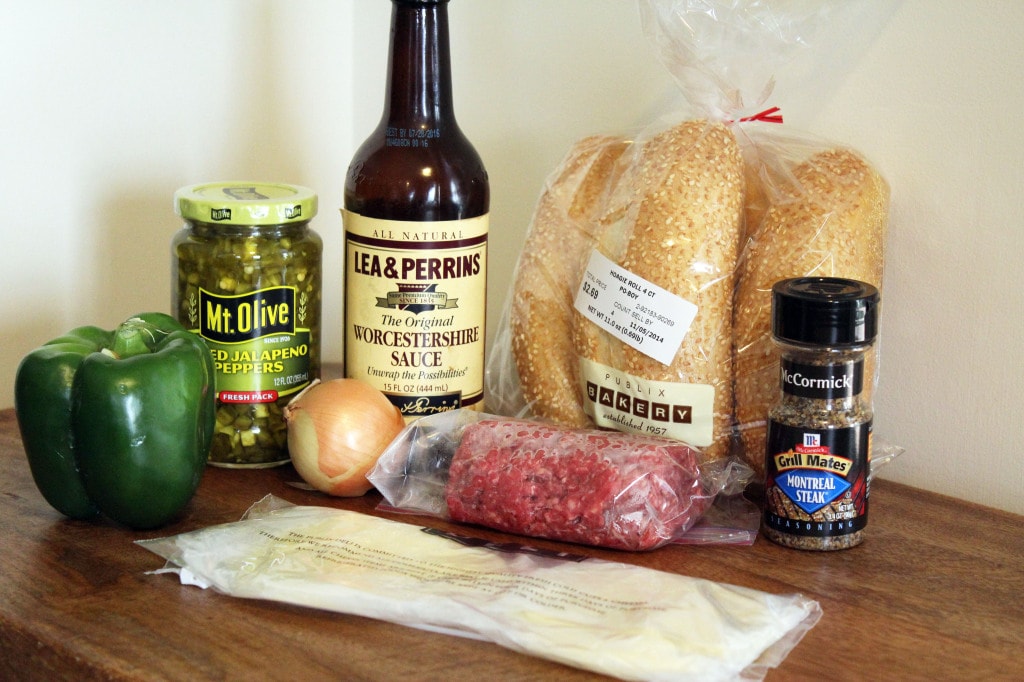 A note:  The recipe below is for 2, and it makes 2 large sandwiches.  The pictures, however, show me making 1 sad sandwich because I'm the only meat eater up in here.  The dogs would beg to differ, but they don't usually get cheesesteaks, much to their chagrin.

Let's start with the meat filling!  To a skillet with a little bit of olive oil over medium-high heat, add the beef.  As the beef starts to cook and sizzle, use a spoon to crumble it up so that it browns evenly. 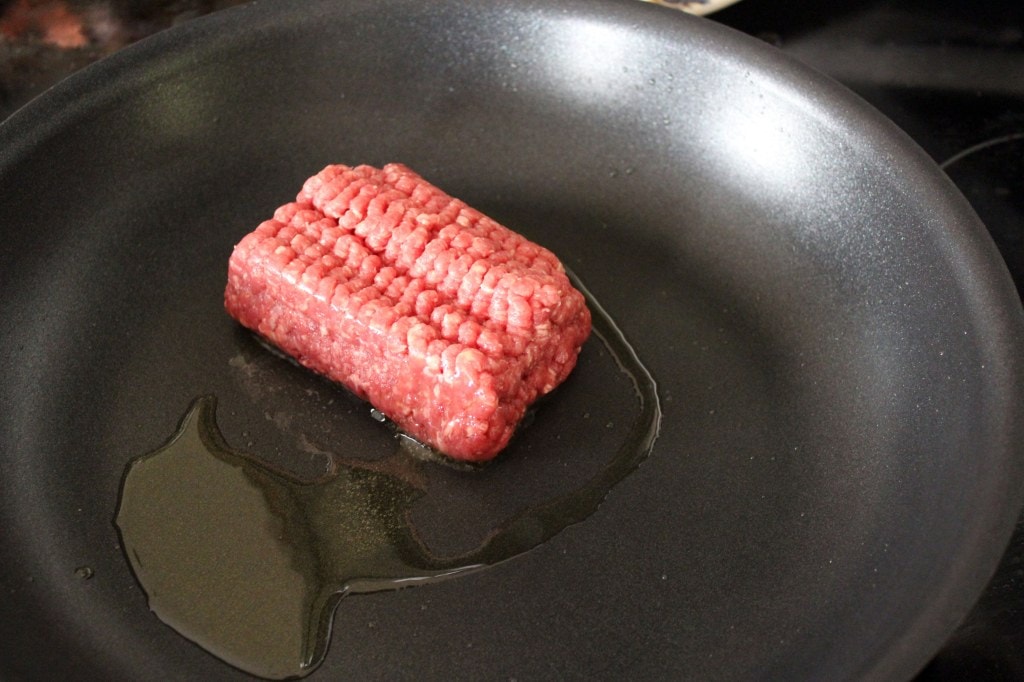 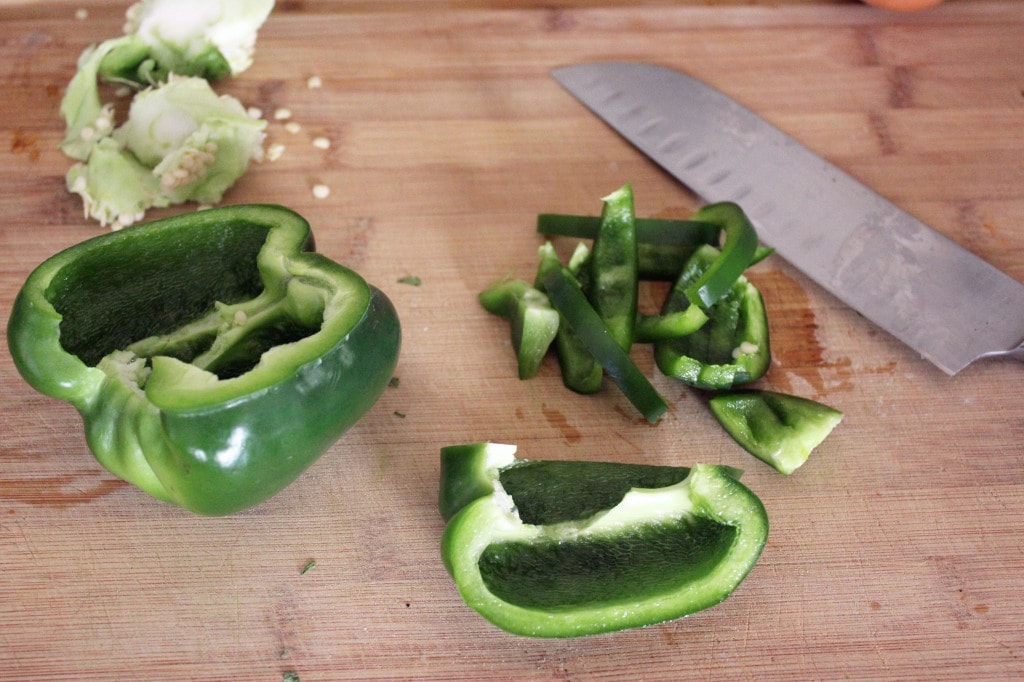 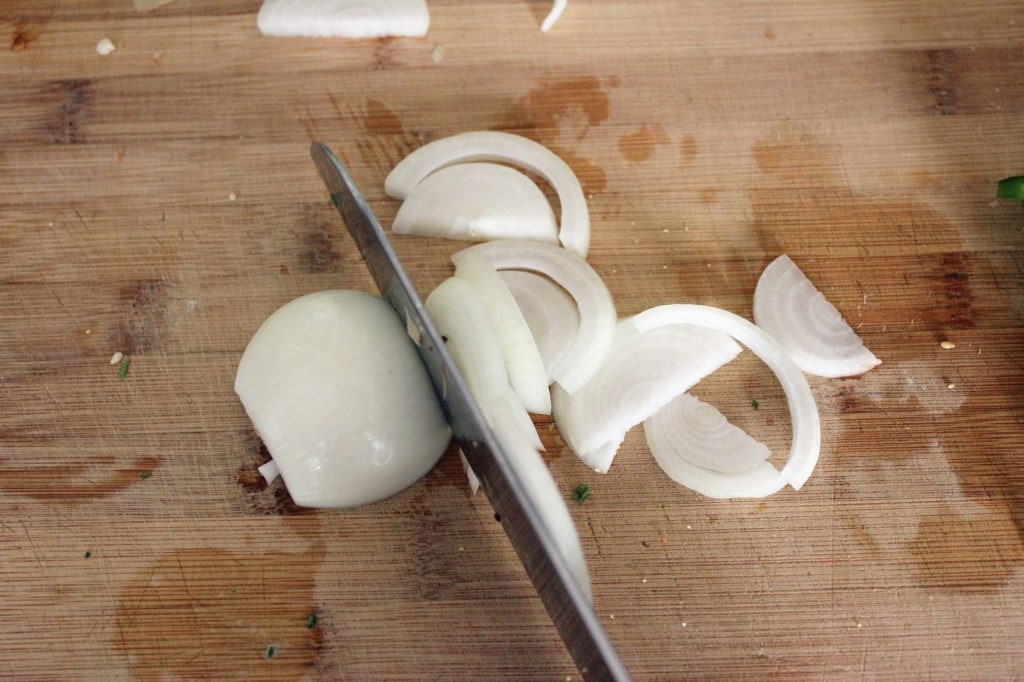 When the beef is cooked and browned, push it to the edges of the skillet and add the onion and pepper. 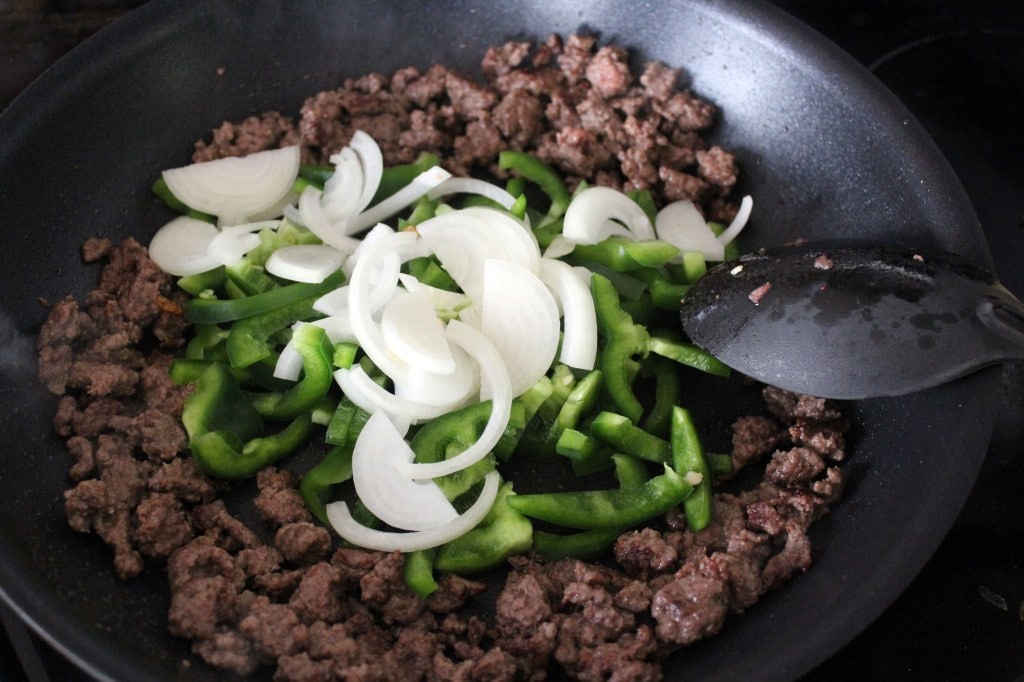 Then, add the Worcestershire sauce with a sprinkle of steak seasoning.. 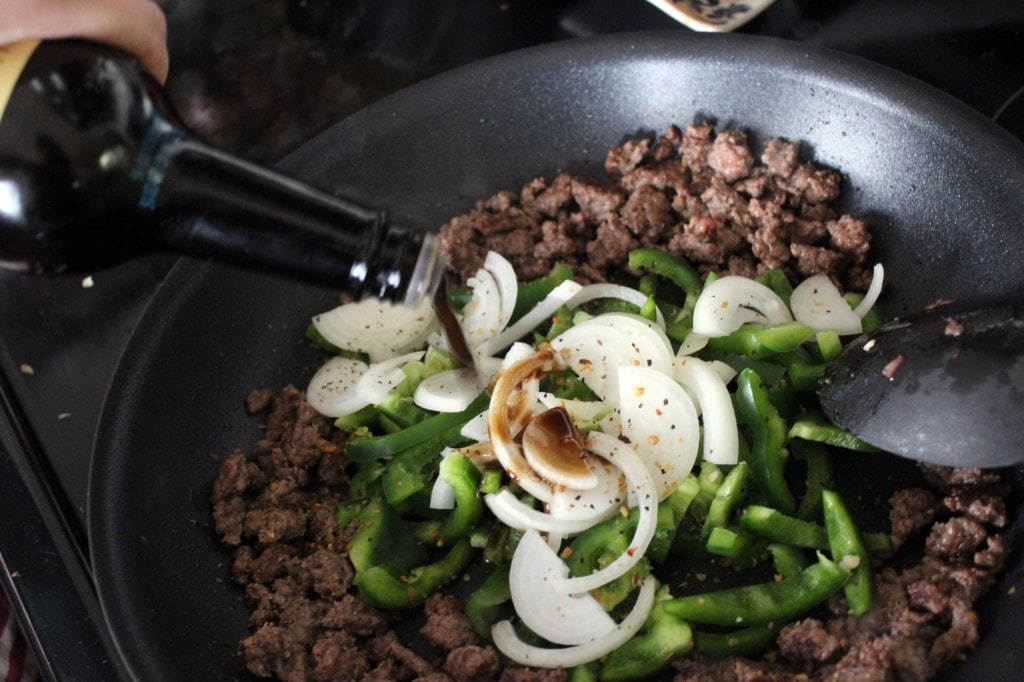 ....and the pickled jalapenos!  The juice is KEY here.  I do about 1 teaspoon of peppers and 1 teaspoon of the juice, then taste and adjust based on how spicy I'm feeling that day. 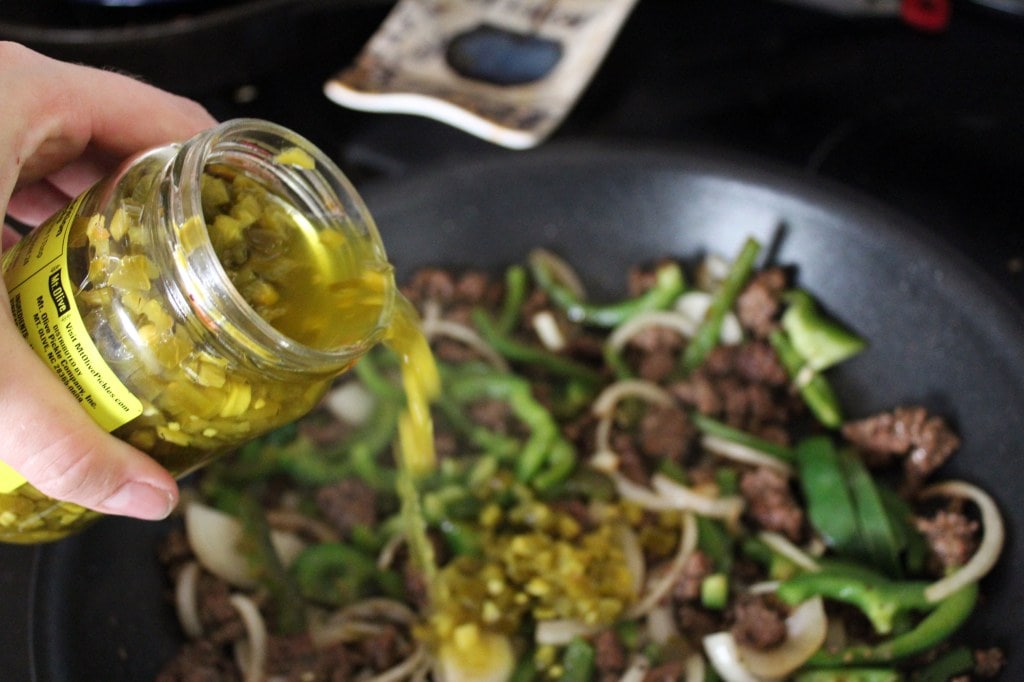 Stir the filling every few minutes for 5-7 more minutes until the peppers and onions are charred and soft.  Taste the mixture, and add more seasonings if you'd like.  Turn the heat off the filling. 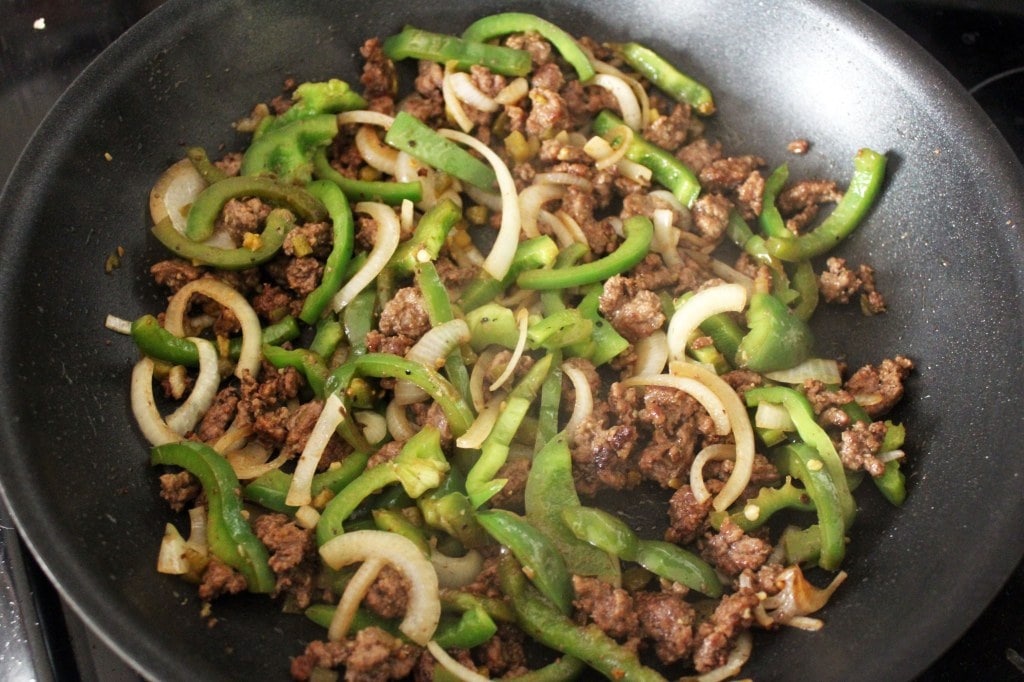 Now, preheat the broiler to high and split the rolls open.  Broil them for a minute or two just until they start to turn brown - not very dark at all since they'll broil again later. 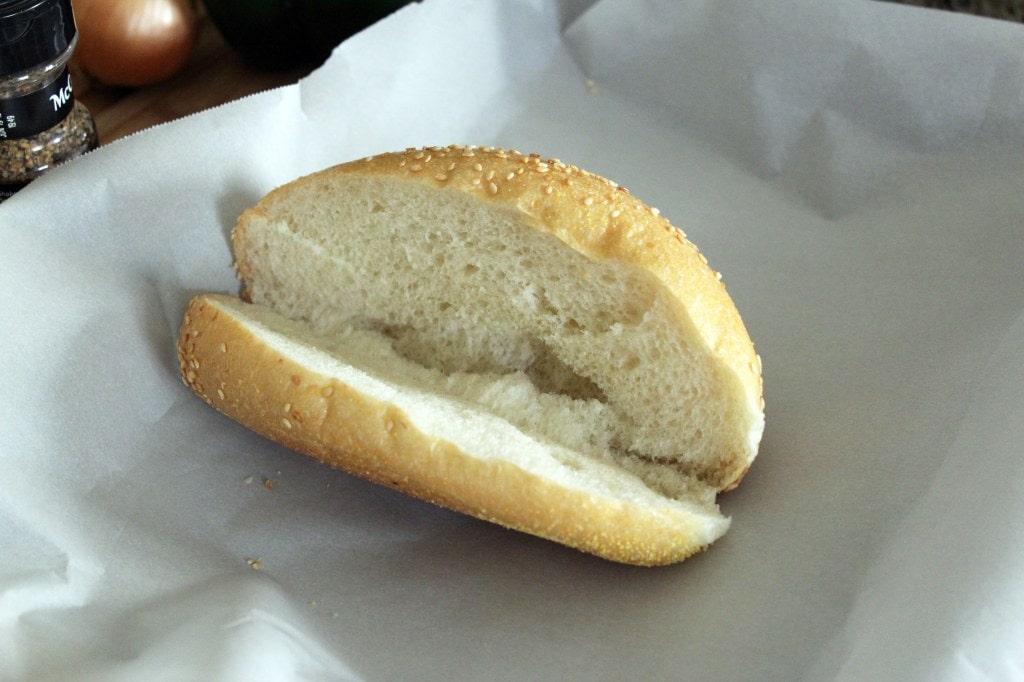 Now, we build our sandwich!  To the top AND bottom of the bun, add a slice of cheese and a little spoonful of the beef mixture. 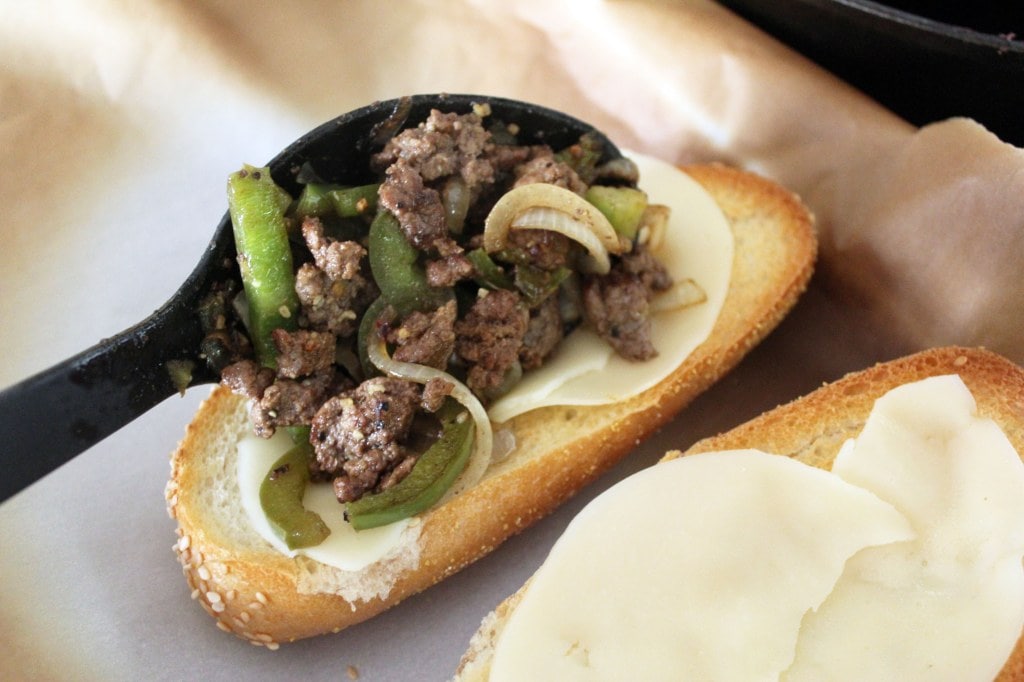 Then, top that with more cheese.  4 slices total per sandwich, so that everything stays together.  BUT, I got mine sliced at the deli as thin as they would go, so it's really more like 2 slices.  4 slices from a package would be a little more than what you see here. 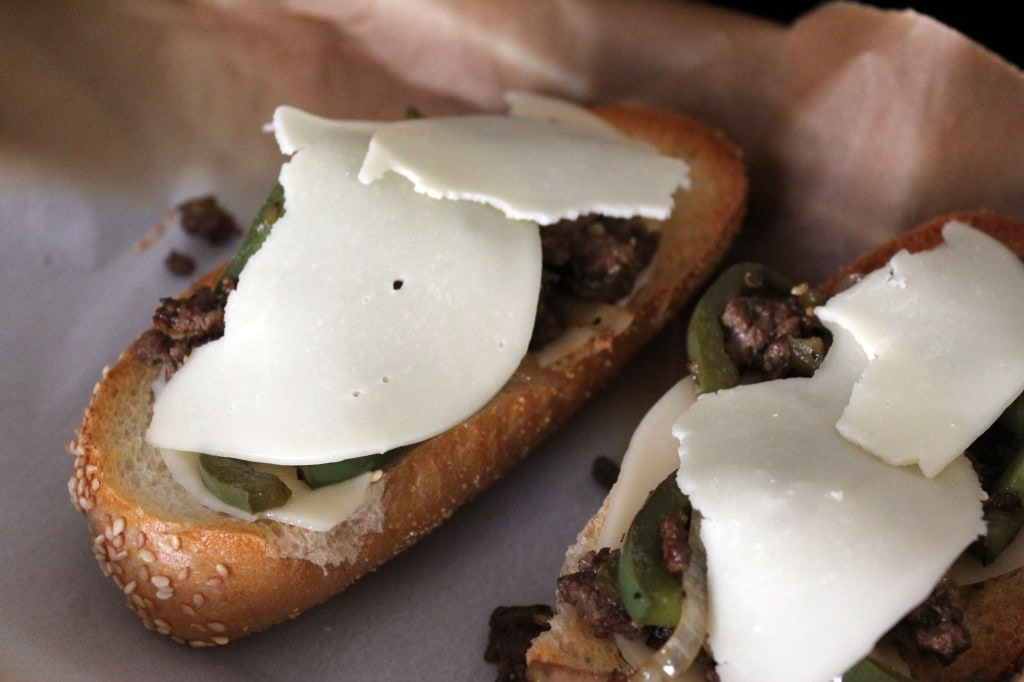 Now we put the sandwiches BACK under the broiler for another 2 minutes until the cheese is melted and bubbly and maybe a teensy bit browned in places.  That's why we don't broil the bread too much at the beginning - if it starts super brown after the first toasting then it'll be REALLY brown after the second toasting around the edges where there's no cheese.  You've been warned. 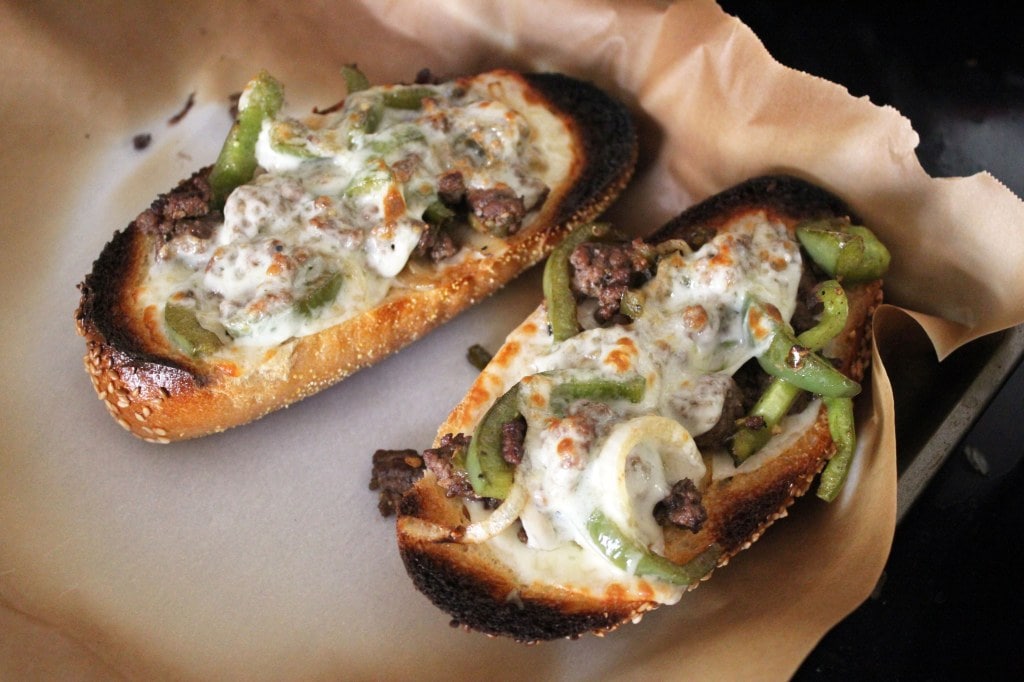 That's it.  Gorgeous, simple, and delicious.  The ground beef to me is way lower maintenance than steak, delicious as that may be, and I don't mess with toppings or mayo or anything - the flavor from the veggie mixture is just perfect. 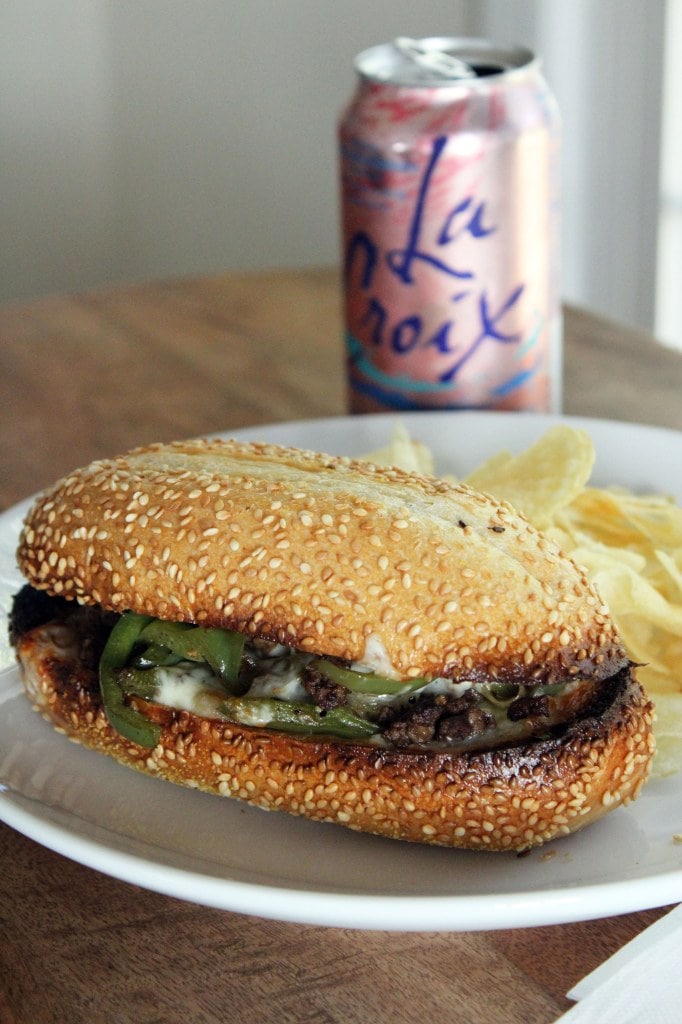 Serve with chips, give Monday the middle finger, turn on football, and breathe. 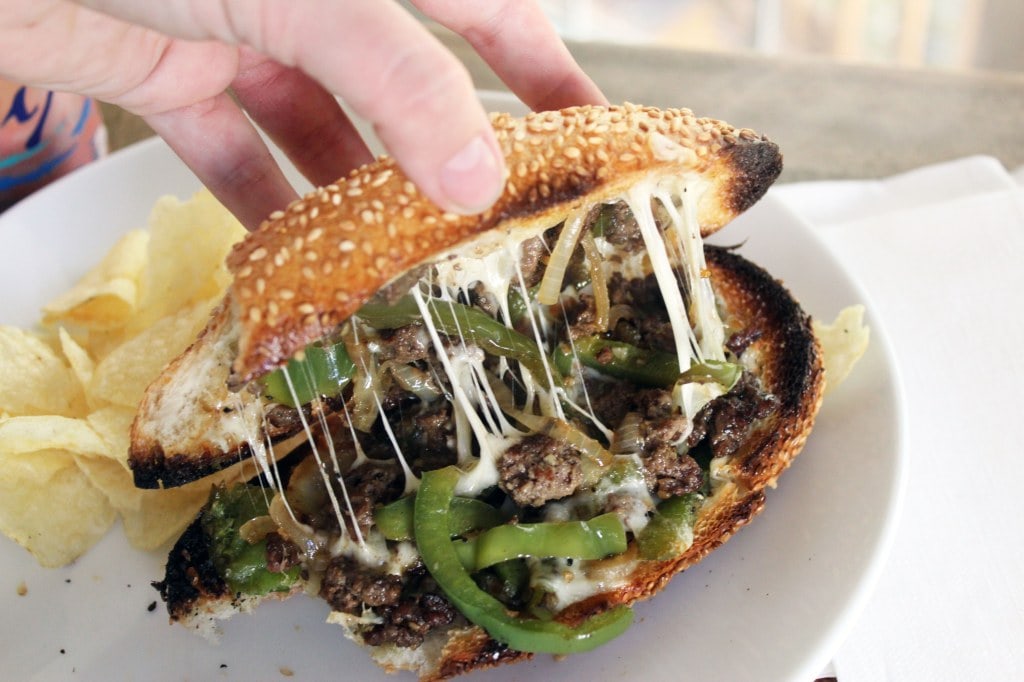