Sounds weird!  But isn't, I promise. 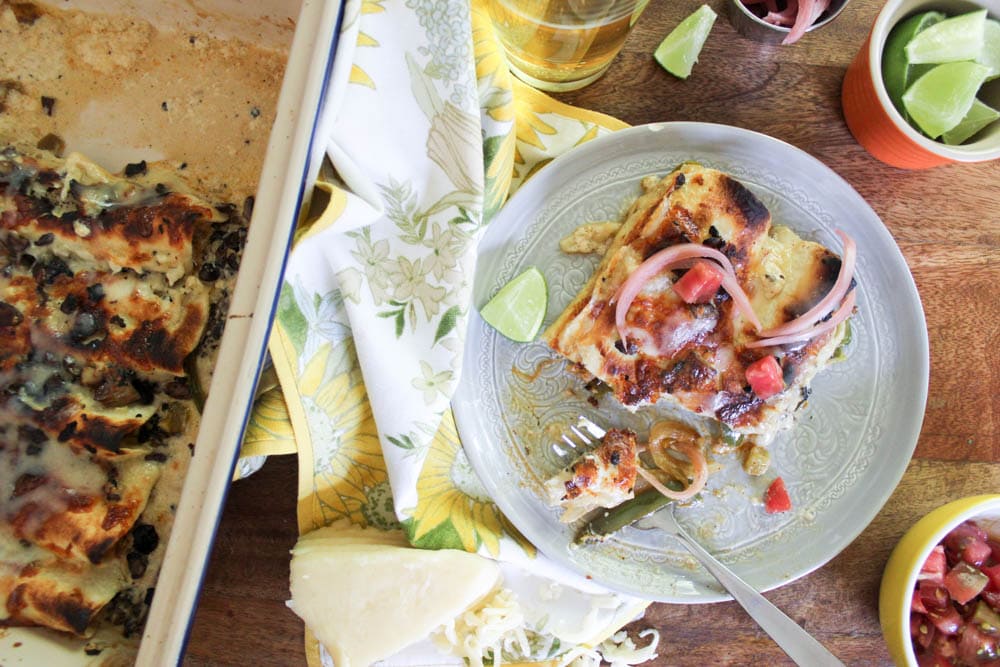 True life, one of our favorite things about Belize was the food at the lodge where we stayed.  I know this isn't entirely shocking, but hear me out.  It wasn't like hotel food at all.  Instead, it was dishes that were comforting and familiar but with little twists that added freshness and flavor and felt decidedly jungle-esque, aka my favorite new genre of food that I just made up.

This is a version of one of the dinners we had - veggie enchiladas with mushroom sauce.  We didn't really know what to expect when we made the order (each meal had a veg and meat option and that was it), but I love mushrooms and Jay doesn't and he miraculously agreed to eat them this one night so marriage win there.  The result was fully decadent but somehow light at the same time because of so many veggies stuffed in.

I made these really simple with 2 types of green peppers and onions, sauteed to taste like fajita veggies.  The veggies are wrapped in tortillas with cheese, skipping the "authentic" step of dunking tortillas in oil or sauce before you wrap them because I have zero time. The sauce is mushrooms and garlic cooked wayyyyy down and chopped finely so they almost mimic ground beef, then drowned in sour cream and heavy cream because you've earned it.

Let's do it.  You need!  Peppers.  Green bell peppers and canned green chiles.  Then there's onion, chili powder, and cumin to make the filling.  Flour tortillas and white melty cheese, obviously.  The sauce is mushrooms, garlic, heavy cream, and sour cream, full stop. You'll need salt and olive oil and any toppings you like - I used lime wedges and my sister's pickled red onions for this batch. 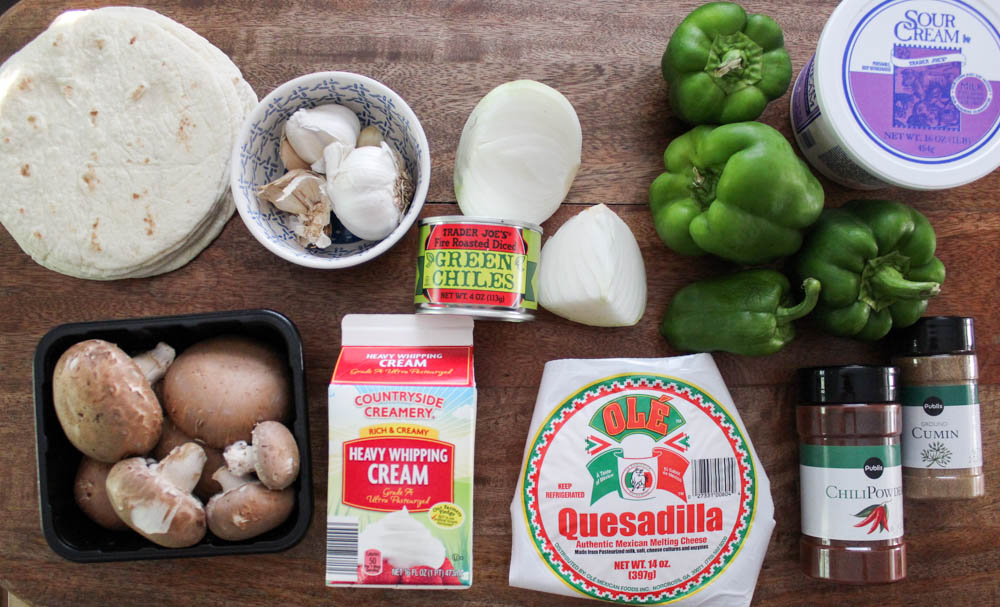 Start by preheating a large skillet to medium-high heat with a drizzle of oil.  While the pan heats up, thinly slice the peppers and onions.  I don't drain the canned chiles - the flavor of the juices is great in this dish. 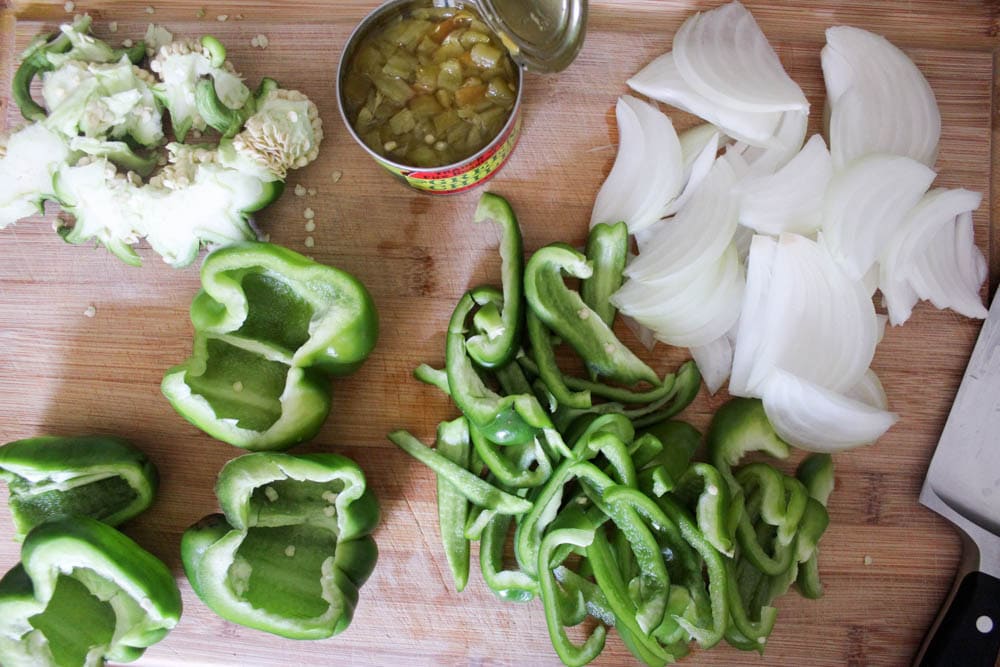 When the pan is hot, add the onions and peppers to the pan with the cumin, chili powder, and a sprinkle of salt. 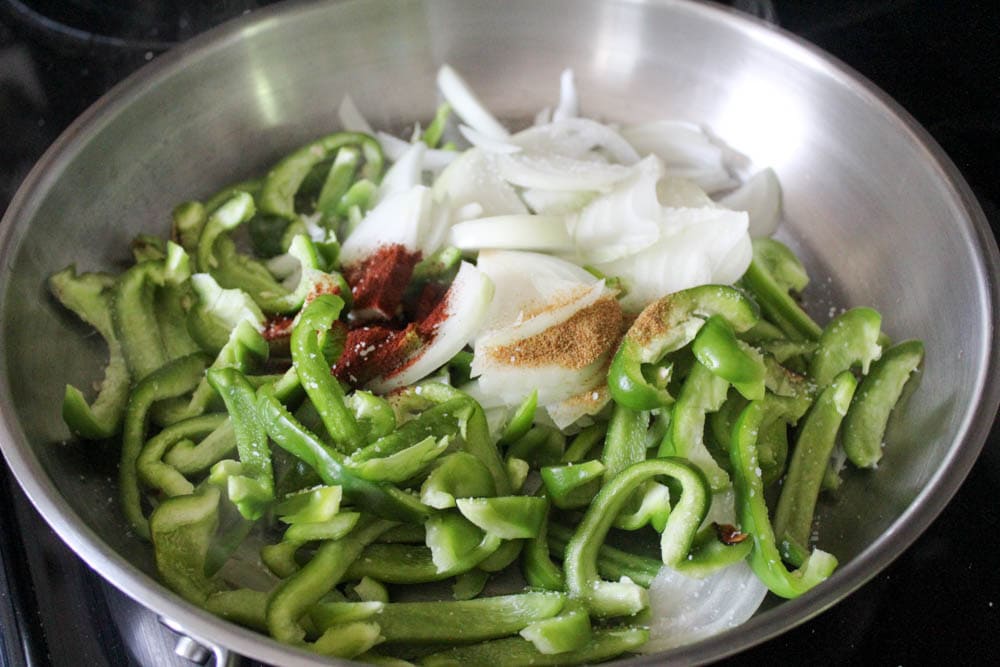 Let the veggies cook for about 5 minutes, stirring once or twice to brown the veggies without letting them burn or stick to the pan. 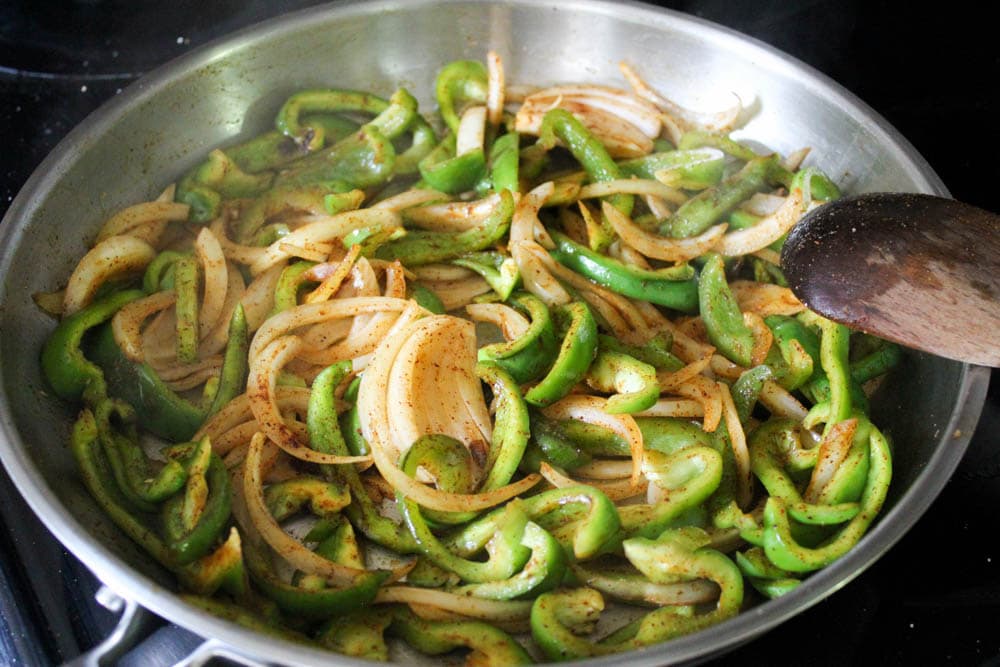 When the veggies are soft but not mushy, add the peppers and stir them in, then turn off the heat.  Use the liquid from the peppers to deglaze the pan a bit as the mixture cools slightly.  While the peppers are cooling, prepare a baking dish with some coking spray and grate the cheese. 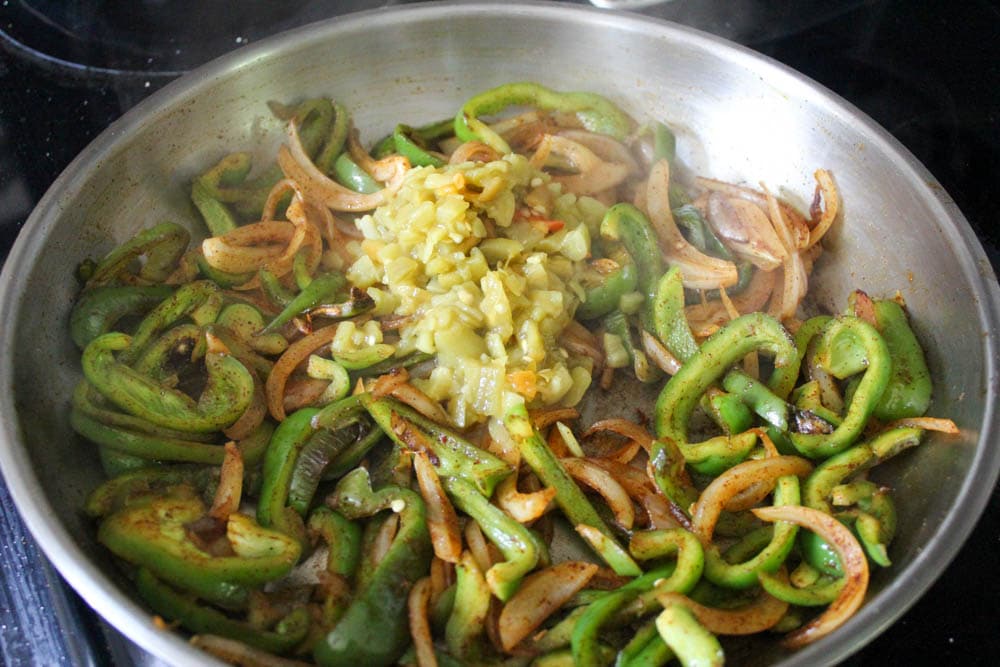 The cheese I use in these is called, literally, queso quesadilla and I find it at regular grocery stores, nothing special.  It melts wonderfully and reminds me of a cross between cheddar and mozzarella.  Any melty cheese that you like is great for this, though, just use what you have.  To build the enchiladas, start by putting a little mound of the pepper filling in a tortilla. 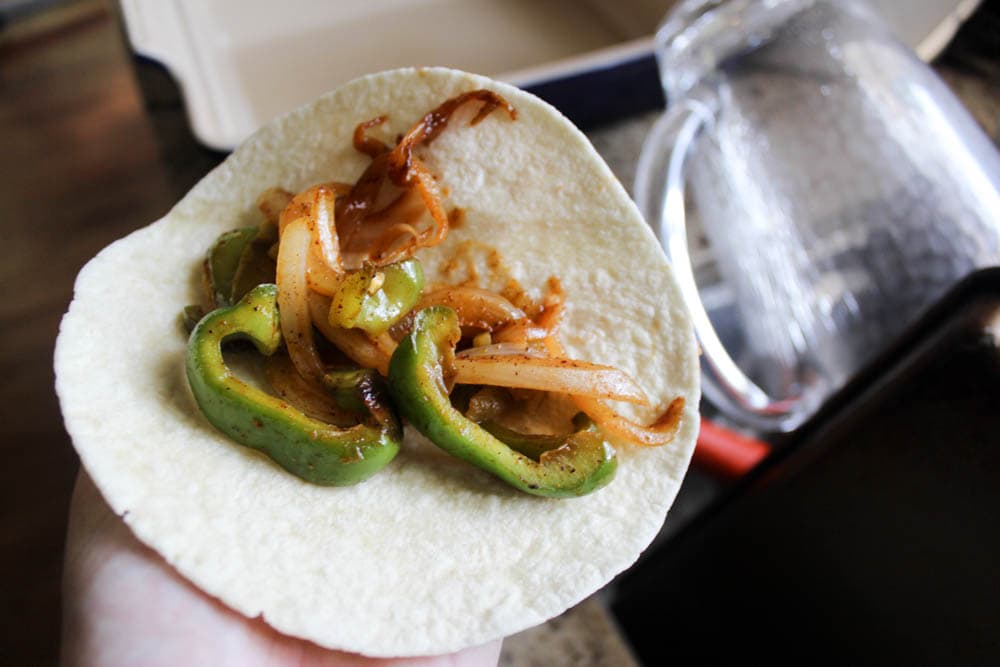 Top the peppers with some cheese, then roll the enchilada up carefully and place it seam side down in a baking dish.  Continue until you've used all of the pepper filling or your pan fills up, whichever comes first. 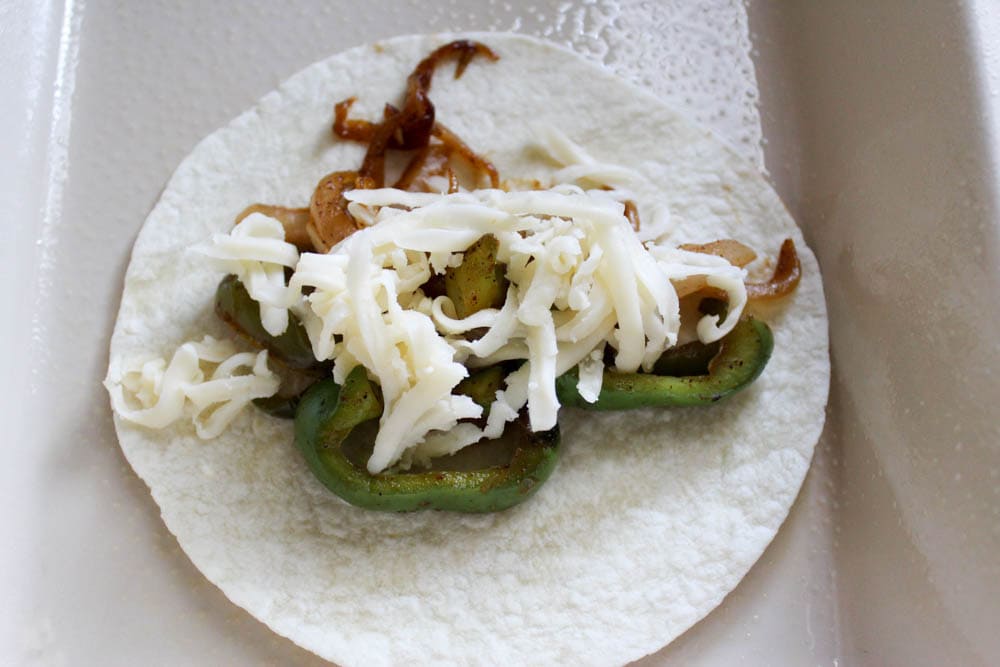 This will make 7-8 enchiladas depending on the size of your tortillas and baking dish.  If you have extra filling or cheese save it for rice bowls later in the week! 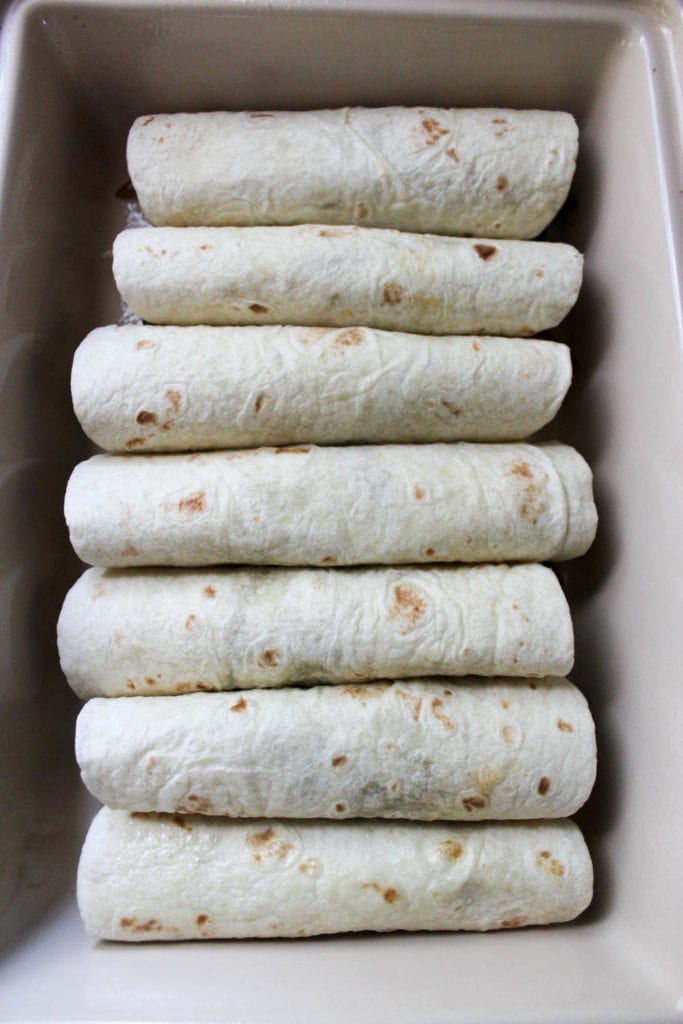 Now, sauce.  Heat another skillet to medium-high heat, and finely chop the mushrooms and mince the garlic. 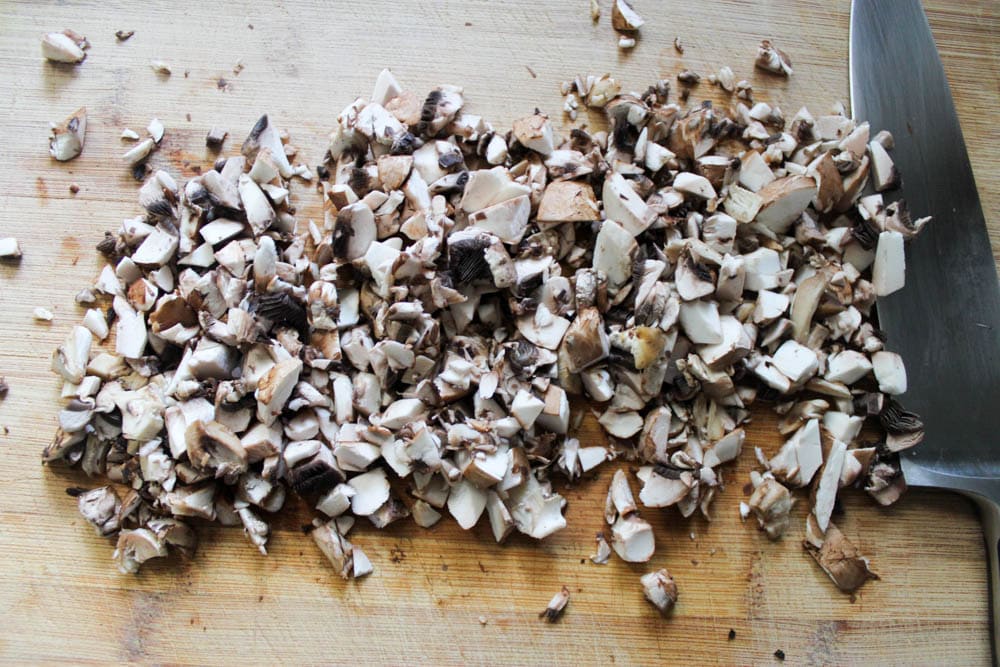 Add the mushrooms to the skillet with some olive oil, and let them cook and brown for several minutes - 7-10 at least, until they are brown and soft.  Add a sprinkle of salt and the garlic, then stir for one minute.  Add the sour cream and heavy cream and turn the skillet off.  Taste the sauce and add more salt; it should be very flavorful so the enchiladas won't be bland. 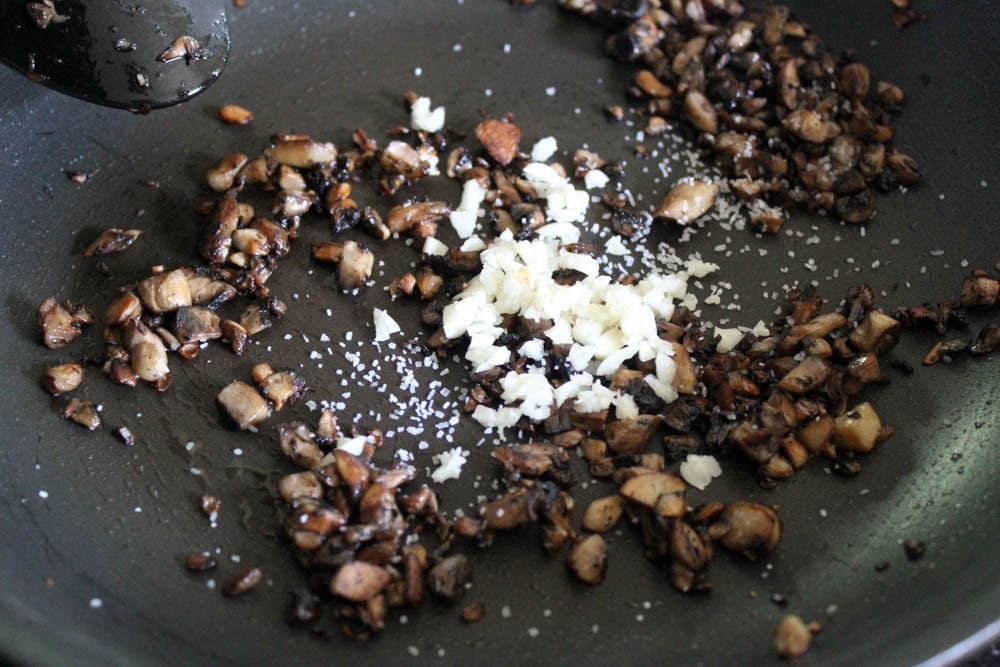 Pour the mushroom sauce over the enchiladas and top the dish with any extra cheese you have. 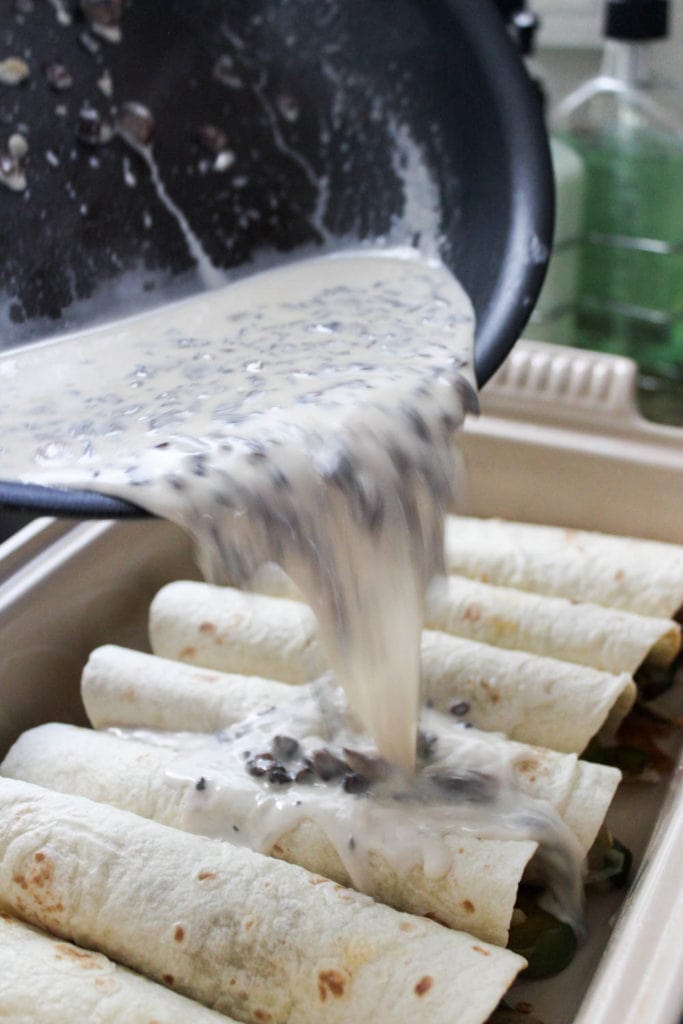 Boom.  Now, to bake!  400F for 20 minutes or so until the sauce is bubbly and the top of the dish is browned.  You can turn on the broiler if you'd like to brown the cheese, and remember that the mushrooms are already really dark so the dish might look a little more brown than you're used to because of the sauce. 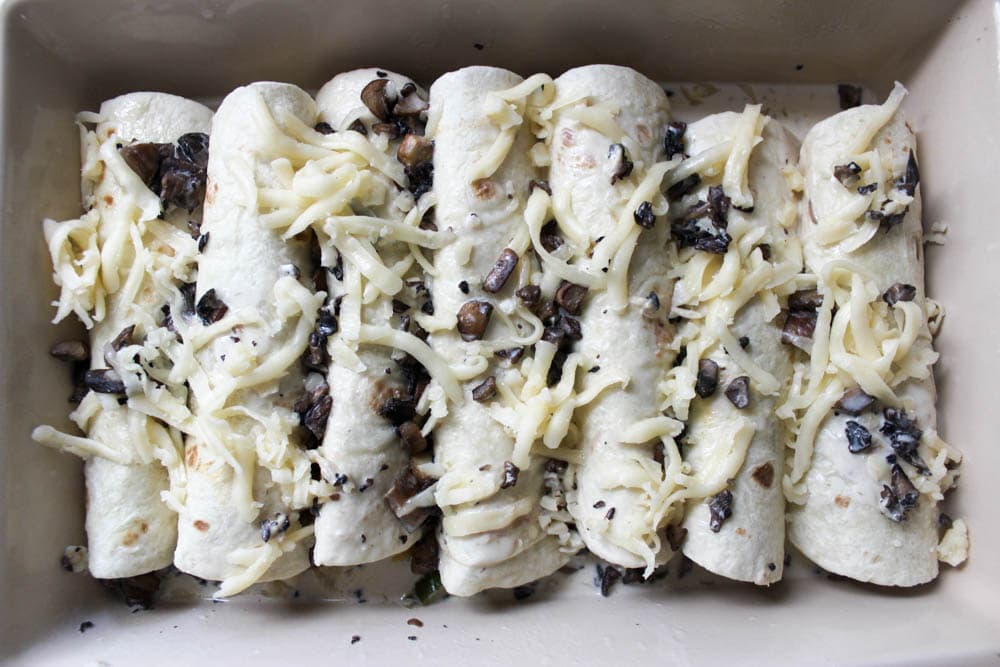 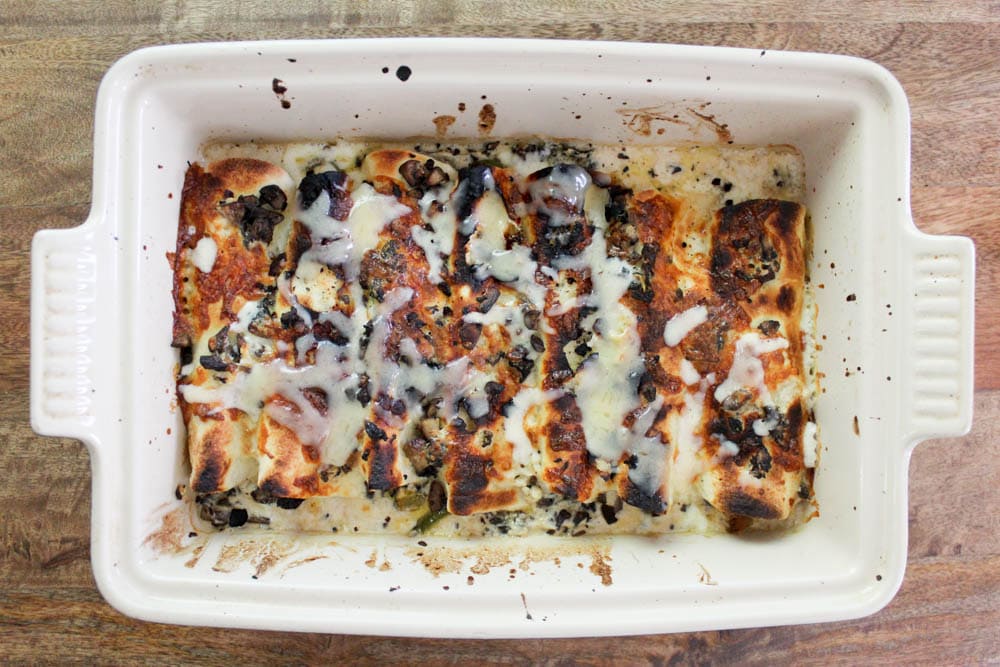 I mean.  Two of these babies makes a perfect light-but-satisfying meal, and you could of course add rice and beans to allow this to serve more people.  The flavor is comforting and a little exotic from the sour cream mushroom sauce, which should be replicated in your house on tons of different dinners, I'm thinking.  Jay claims to hate mushrooms and loved this because the fungi were chopped up super teeny and gave a great flavor without mushroom texture, which he finds rubbery, the bum. 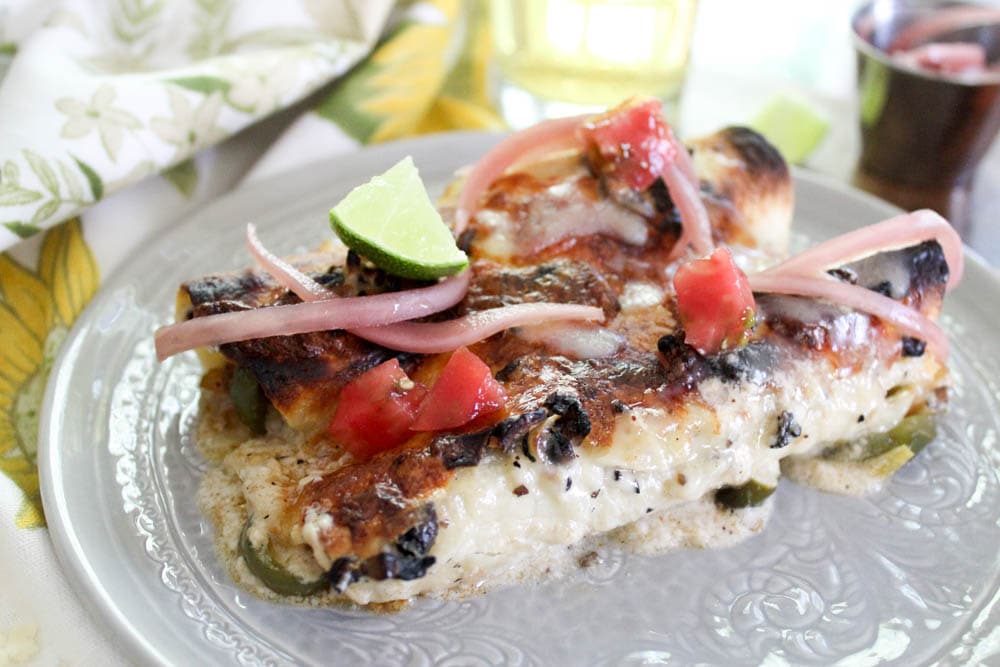 Lime wedges, pickled onions, cilantro, salsa....all wonderful toppings, so the sky's the limit there.  To make-ahead, just assemble the entire dish until the last baking step, then keep it covered in the fridge for 3-4 days.  Bake it at 400F until it's hot, probably closer to 30 minutes or longer if it's been in the fridge for a long time.

How do we feel about calling them enchis?

Cut down on the cook time here by making the mushroom sauce while you are rolling the enchiladas.

Like heat? Add a sliced jalapeno to the pepper mixture, or serve with hot sauce.

To make ahead, make the entire dish except for the last baking step. Keep covered in the fridge for 3 days or so until you'd like to eat the enchiladas. Reheat in the oven from COLD at 400F (dish goes uncovered in a cold oven, then turn to 400F) for 30-45 minutes until the dish is hot, bubbly, and slightly browned on top.

« Five for Friday
In The Know Upstate »