Ok, I'm over my bummy feeling about the rain. 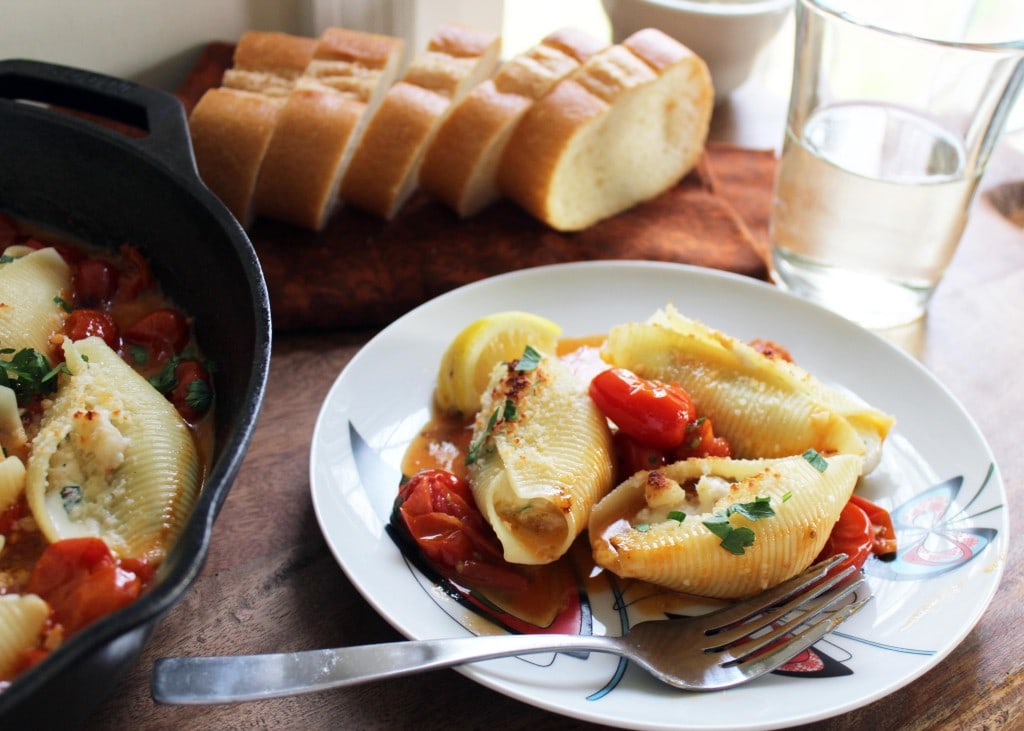 Although, wouldn't ya know?  It's still raining.  The air is WET, and it's hot not but feels hot because it's so muggy, and I have one dog who just flat out refuses to go pee in the rain, so she's been holding it for over 12 hours.  Not my problem, and no, she won't go in the house.  Yet.

But even though it's rainy and nasty and we're SO CLOSE to New York, we still need to eat dinner.  And Wednesday just kind of screams spaghetti, don't you think?  I definitely think.

So we had a box of jumbo shells, and we had some shrimp, and Jay doesn't eat meat, and this was born.  It's kind of a cross between shrimp scampi (wait for the butter) and stuffed shells, and if you don't like dairy with seafood this is NOT the recipe for you.  But I happen to love dairy with all things, so I say screw the rules and give it a try. 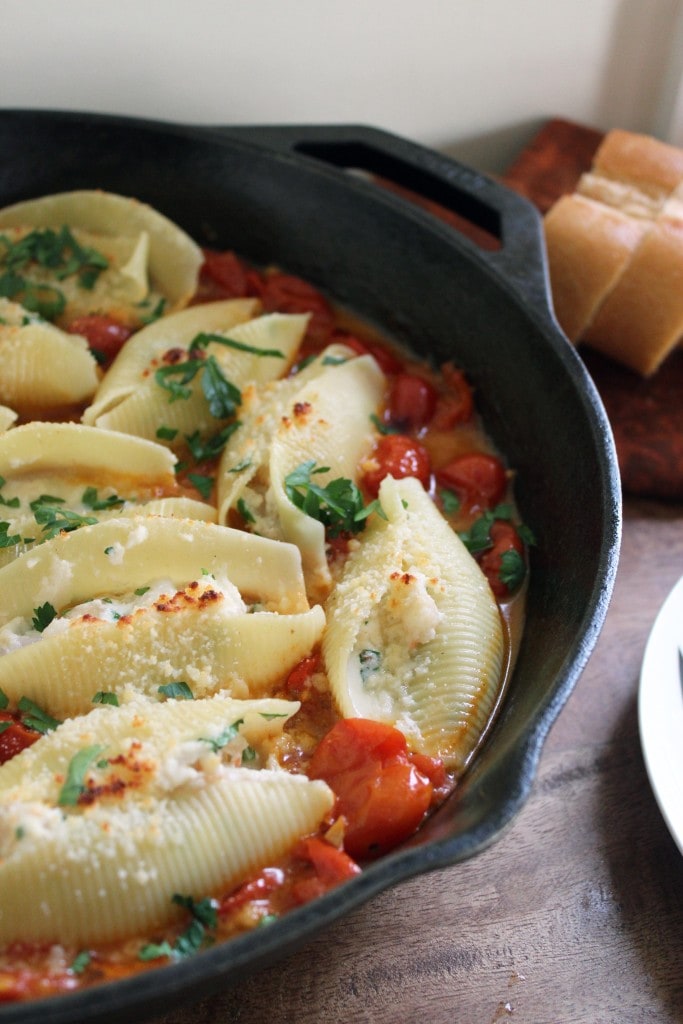 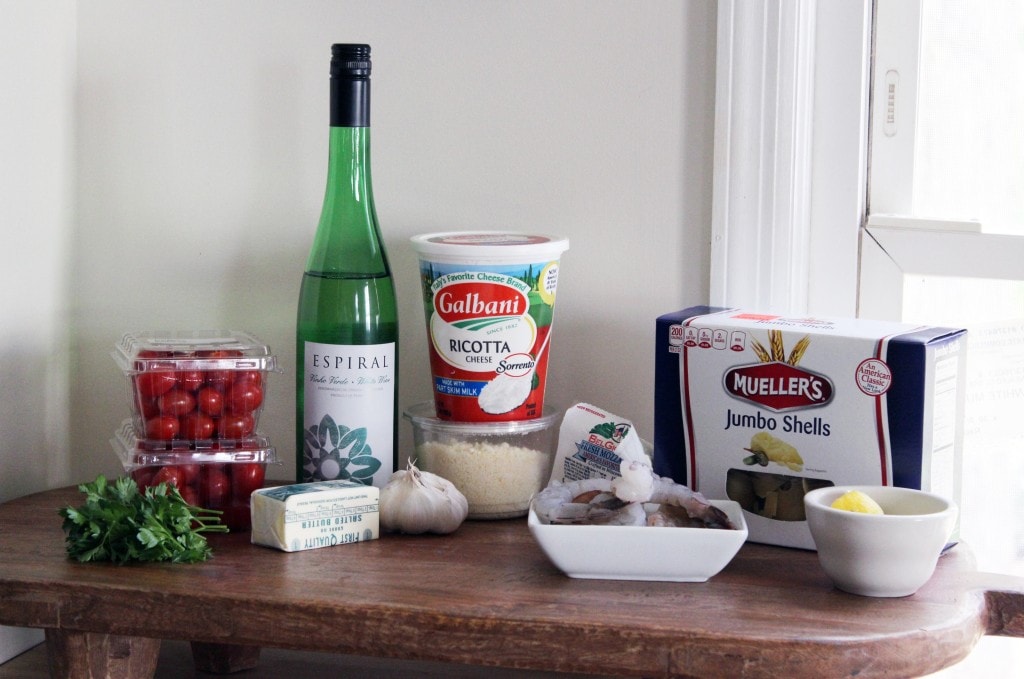 First, you'll boil the shells to al dente and drain them while we prep the other ingredients.  When you drain the pasta, spray it with some cooking spray so it doesn't stick together and tear when you're ready to stuff the shells.  Then, mince the garlic. 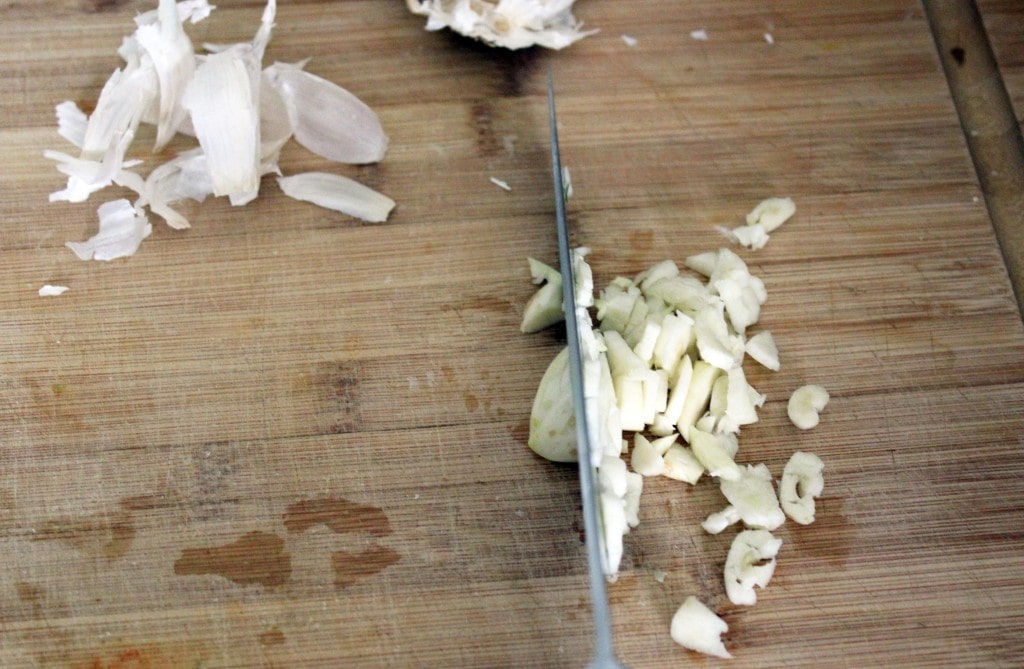 And cube the mozzarella. 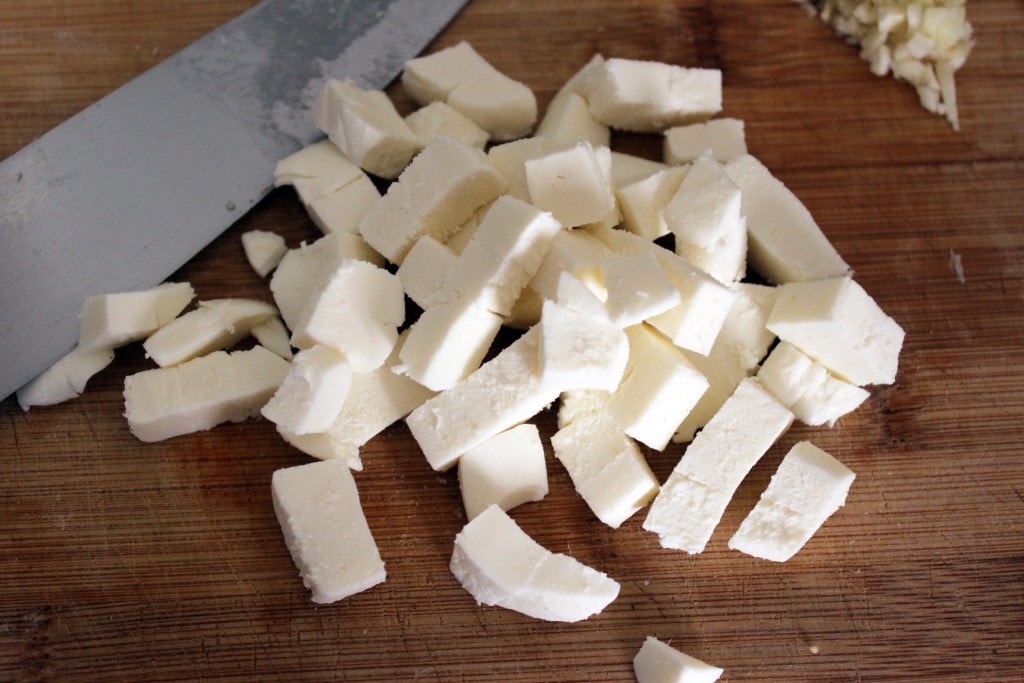 And chop the parsley!  Prep:  Done. 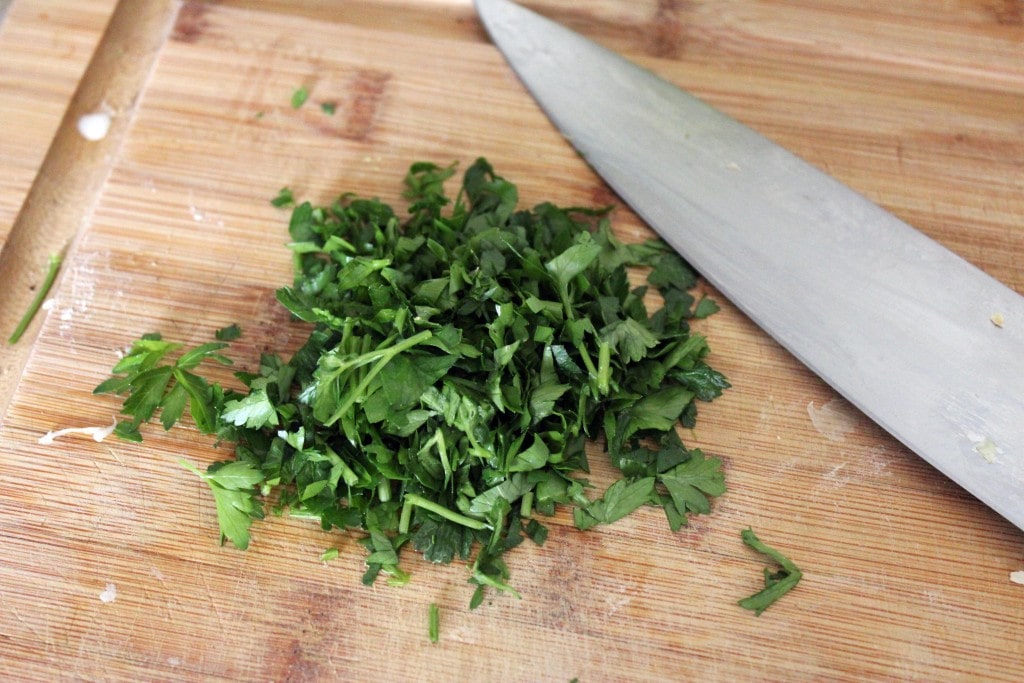 Now, heat an ovenproof skillet (so that you can do all this in one skillet) to medium-high with a pat of butter. 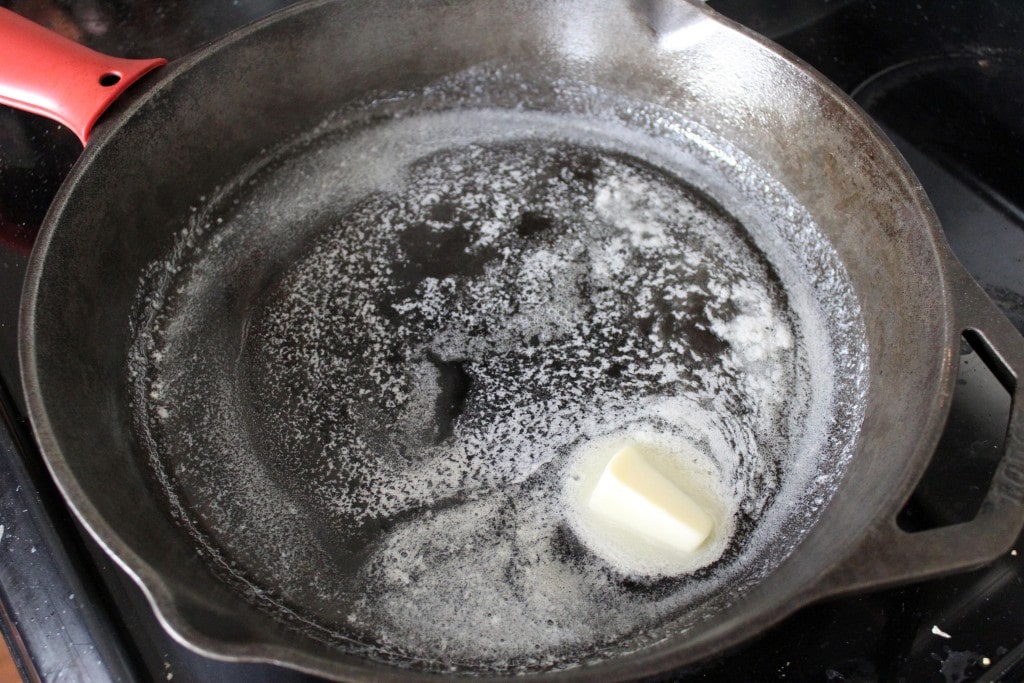 When the butter foams and melts, add the shrimp. 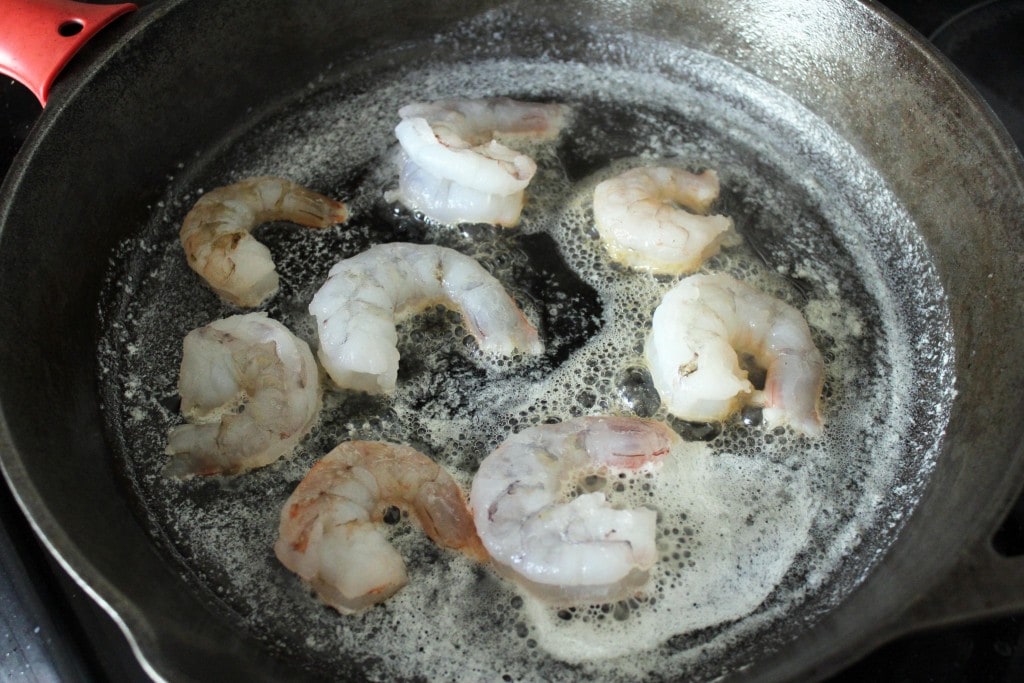 Cook the shrimp for about 2 minutes on each side until JUST cooked, or a little undercooked - they'll keep cooking after they come out of the skillet and again when we bake the shells. 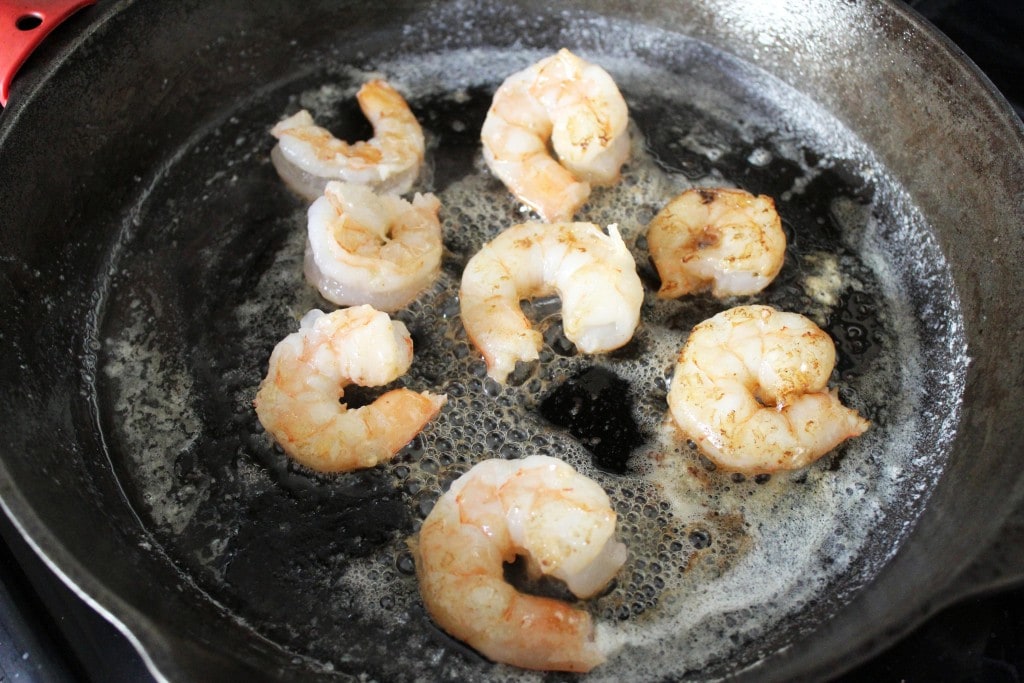 To the same skillet, add all the tomatoes. 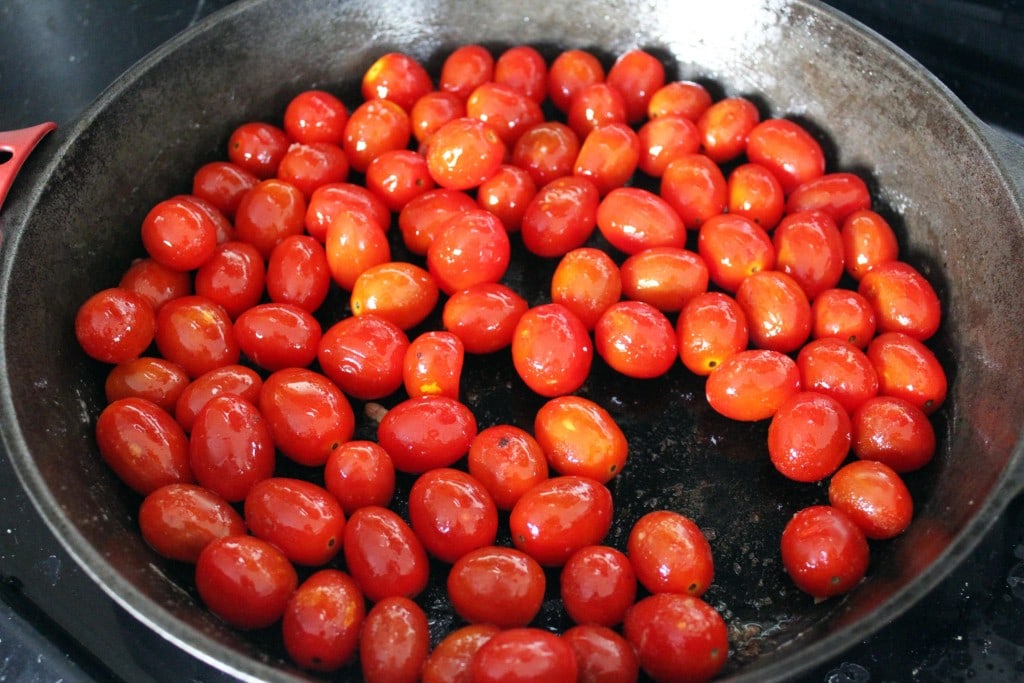 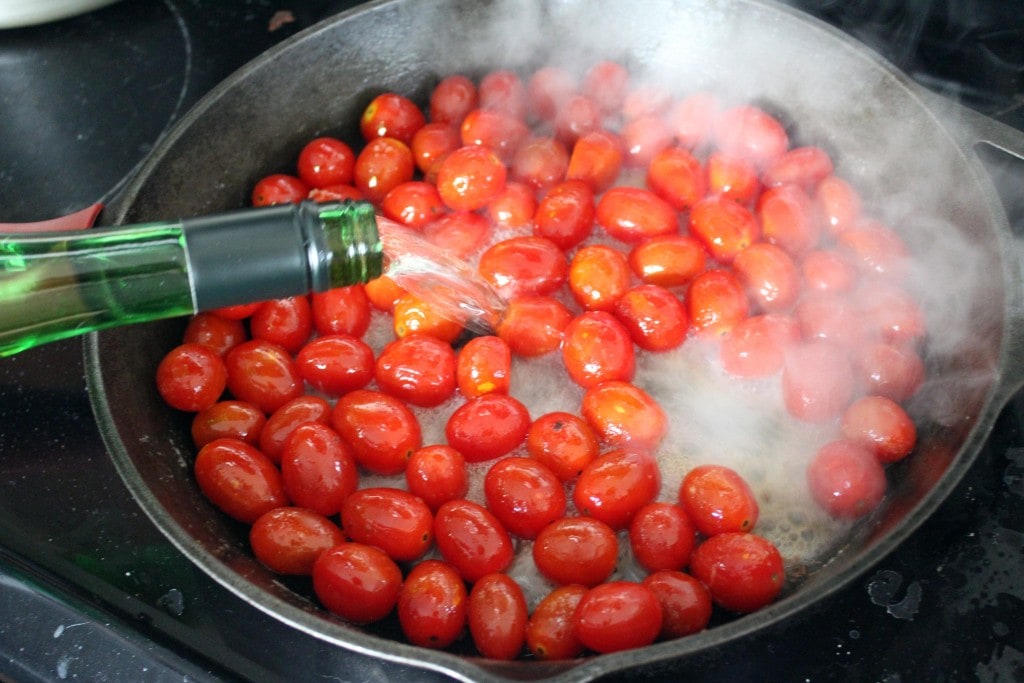 Reduce the heat to medium and let the tomatoes start to cook and burst while you work on the shrimp.  Chop it coarsely. 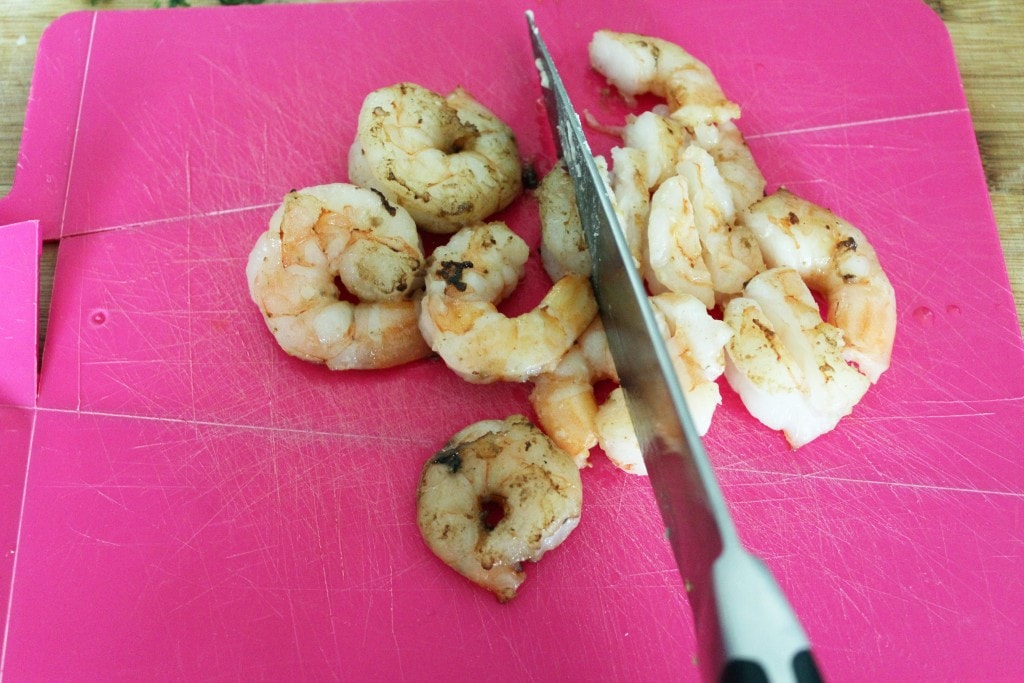 Then, add the ricotta, mozzarella, shrimp, and parsley to a bowl.  Sprinkle on a little salt and pepper. 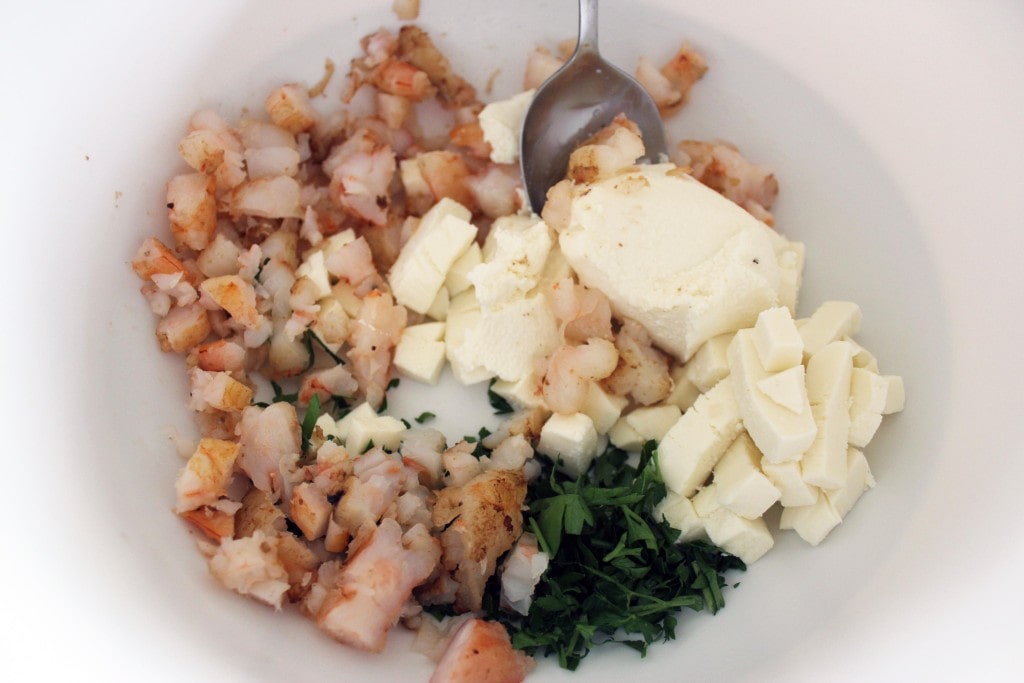 Mix the filling together, then set it aside until you're ready to stuff the shells. 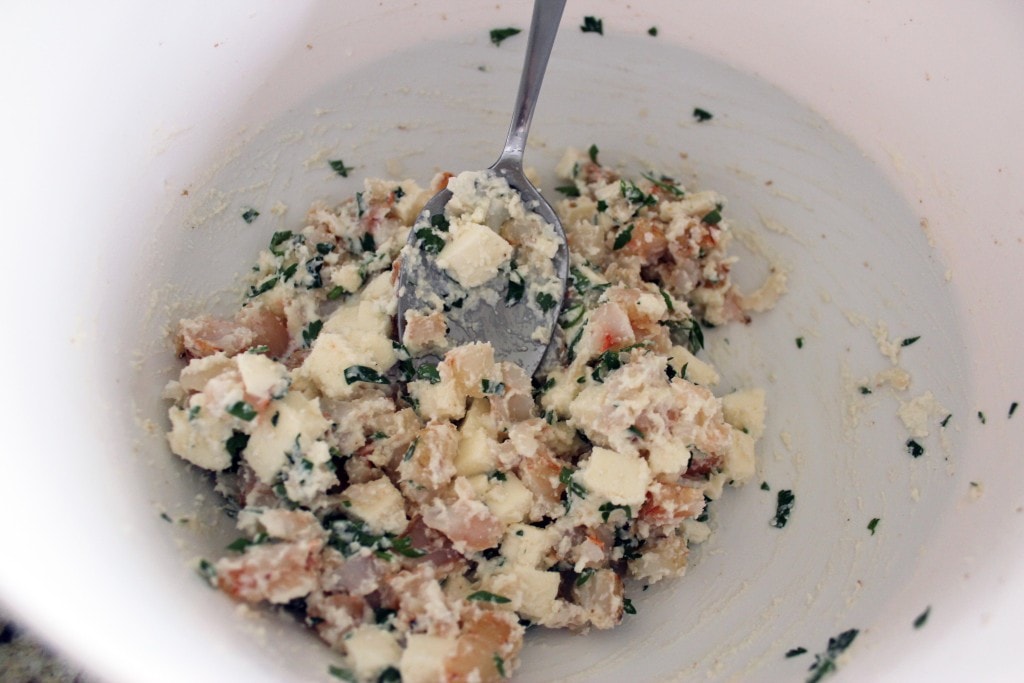 Back to the sauce!  Once the tomatoes have started to blister a bit, use the back of a spoon to squish them - most of them will burst really easily! 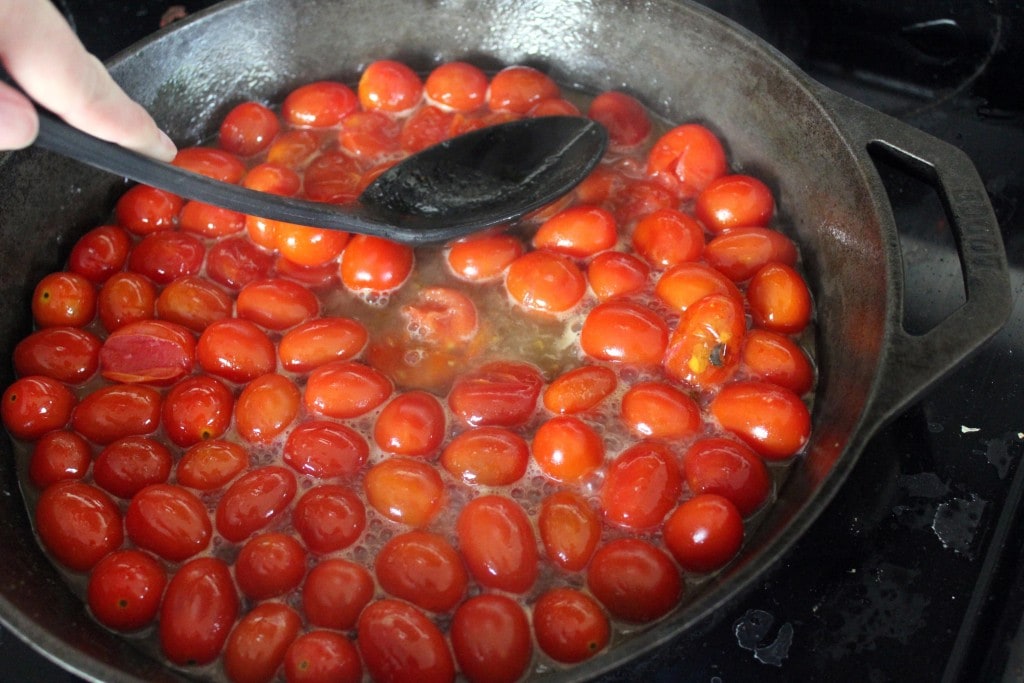 Then, add the garlic and half the remaining butter. 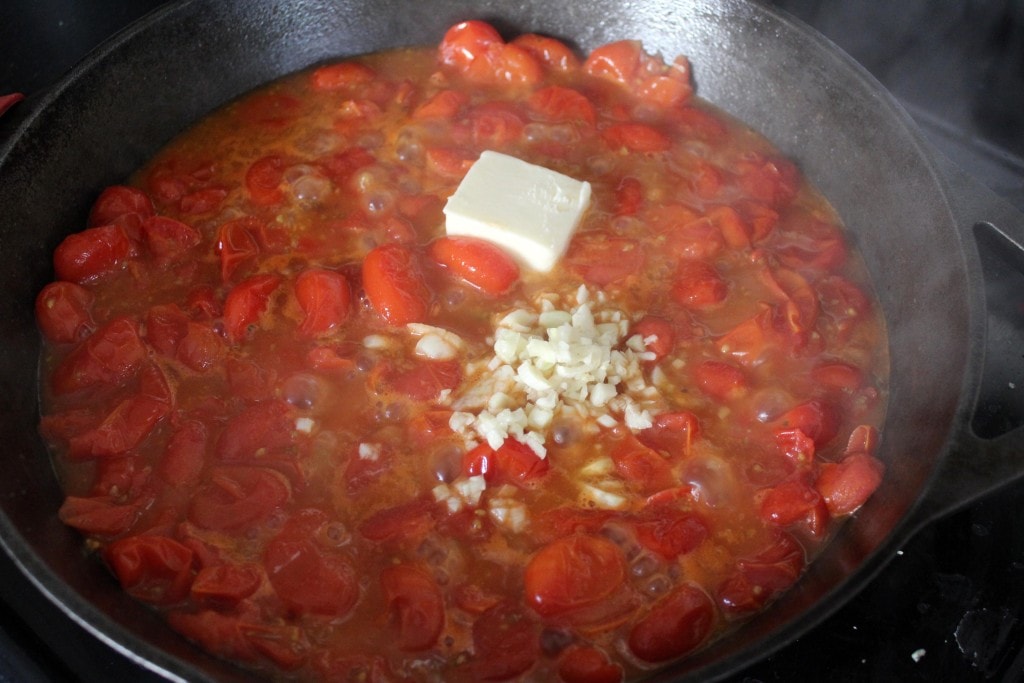 Keep stirring the sauce and squishing the tomatoes until everything comes together.  At the last minute, swirl in the last of the butter, and taste for salt and pepper.  Add as much as you need! 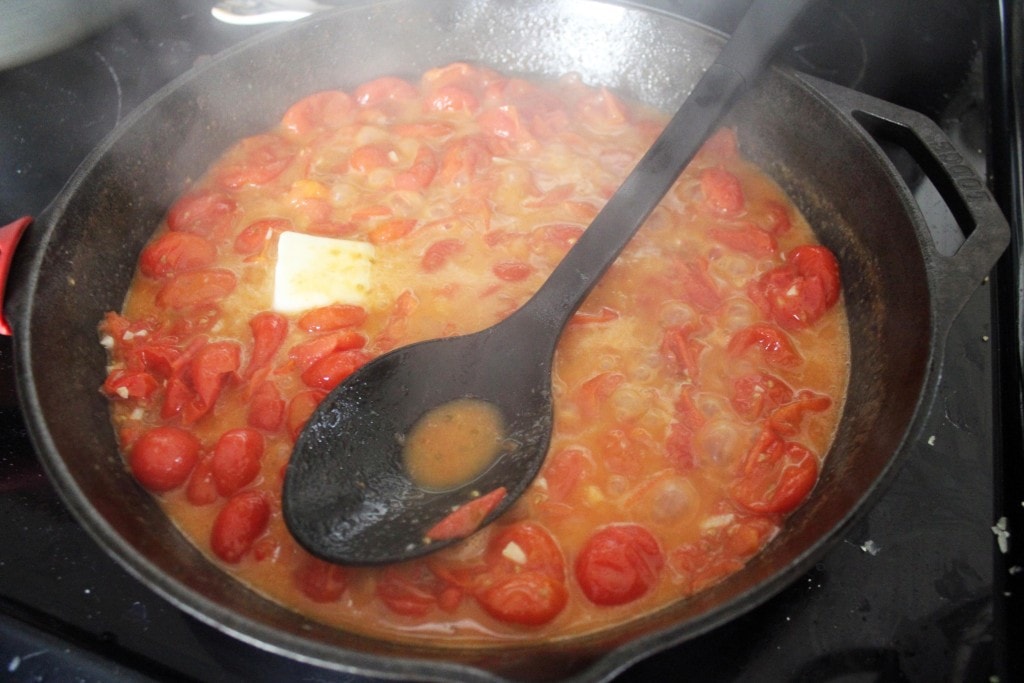 So now we have cooked noodles, prepped filling, and sauce!  If you're going to serve this right away preheat the oven to 400F.  Then, spoon a bit of the filling into each of the shells - not too much!  We don't want the cheese to ooze everywhere. 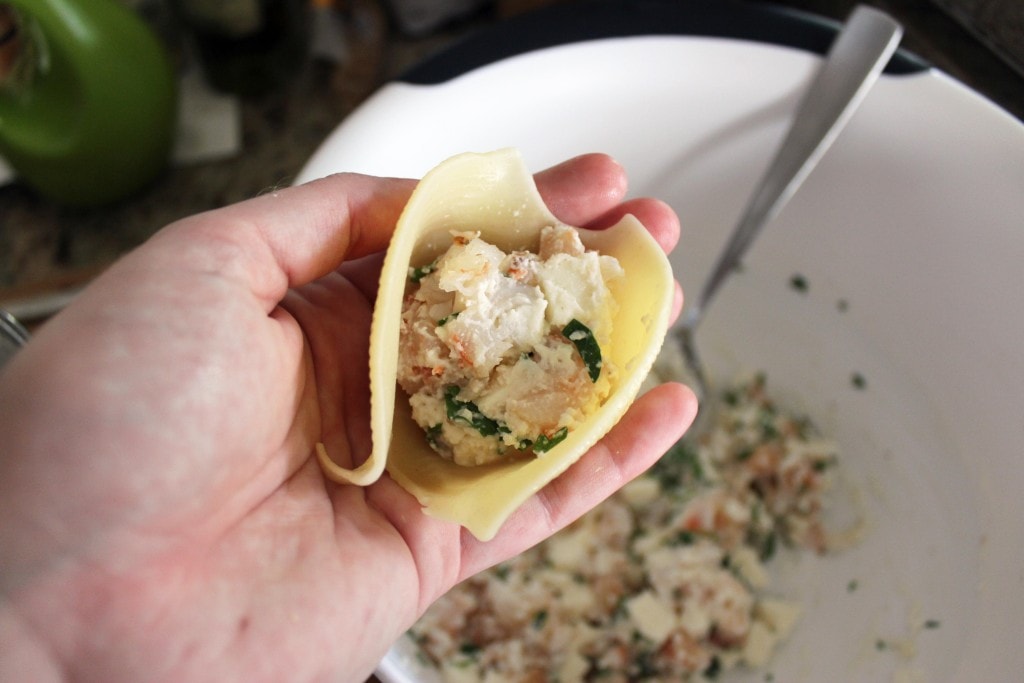 Keep filling the shells and nestling them seam side UP in the sauce. 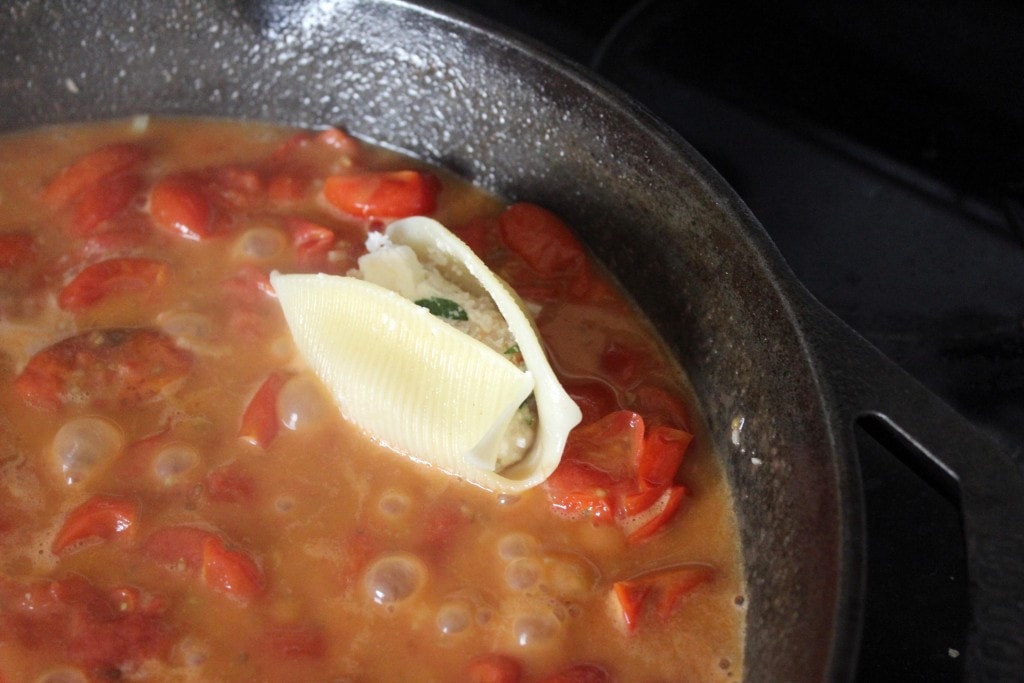 Then sprinkle the whole dish with the parmesan. 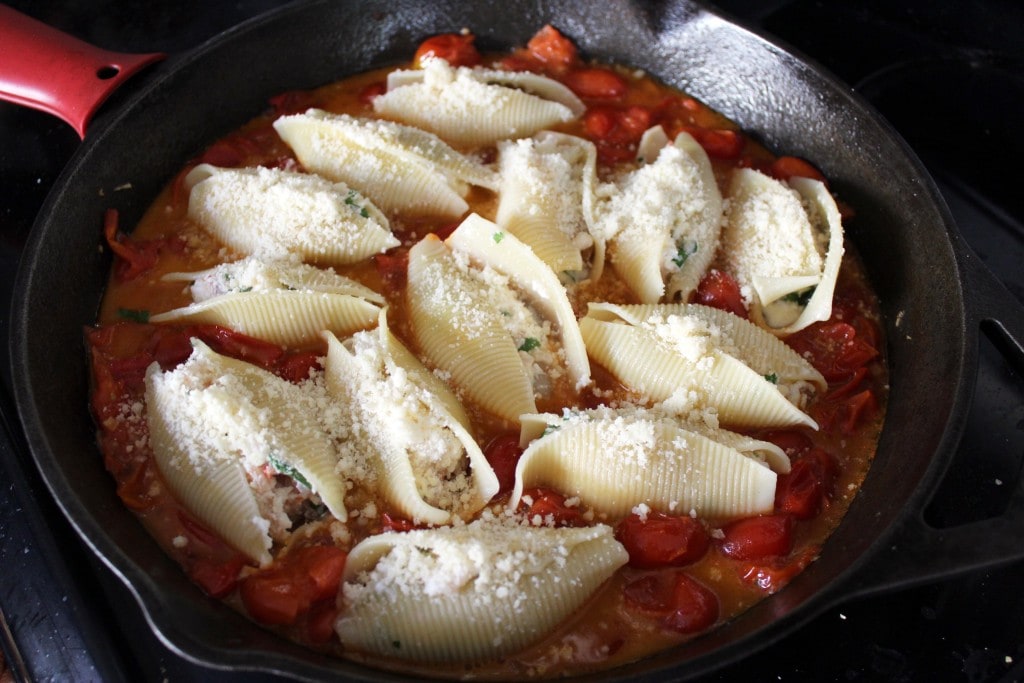 Now we bake!  20-30 minutes until everything is bubbly and the cheese is browned. 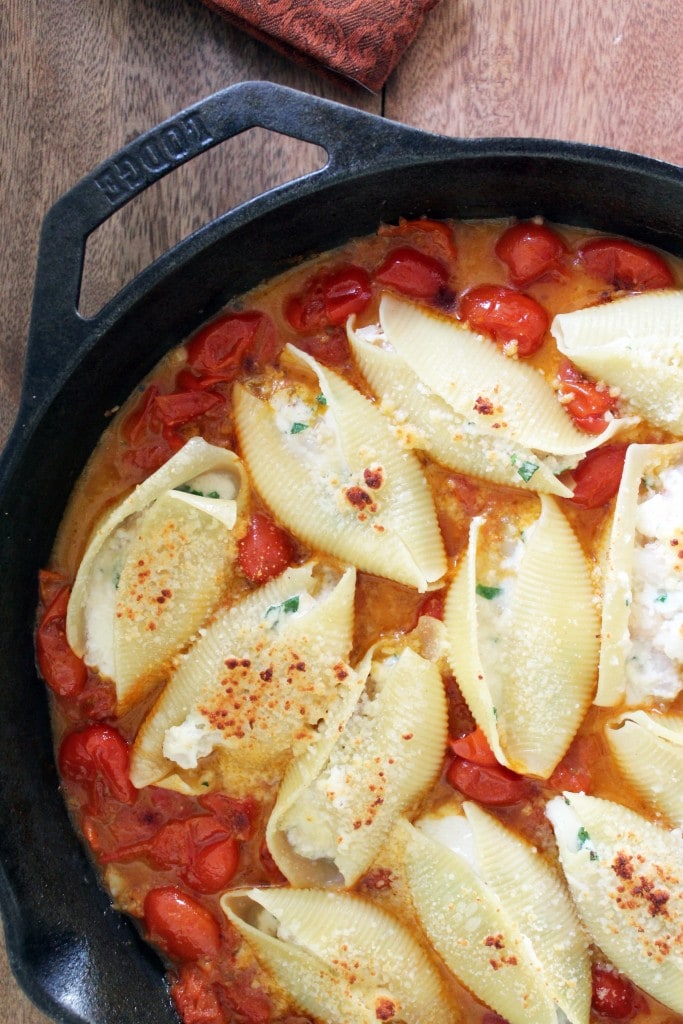 Garnish with the leftover parsley.

And if you're into citrus and seafood give a little squirt of lemon over the dish. 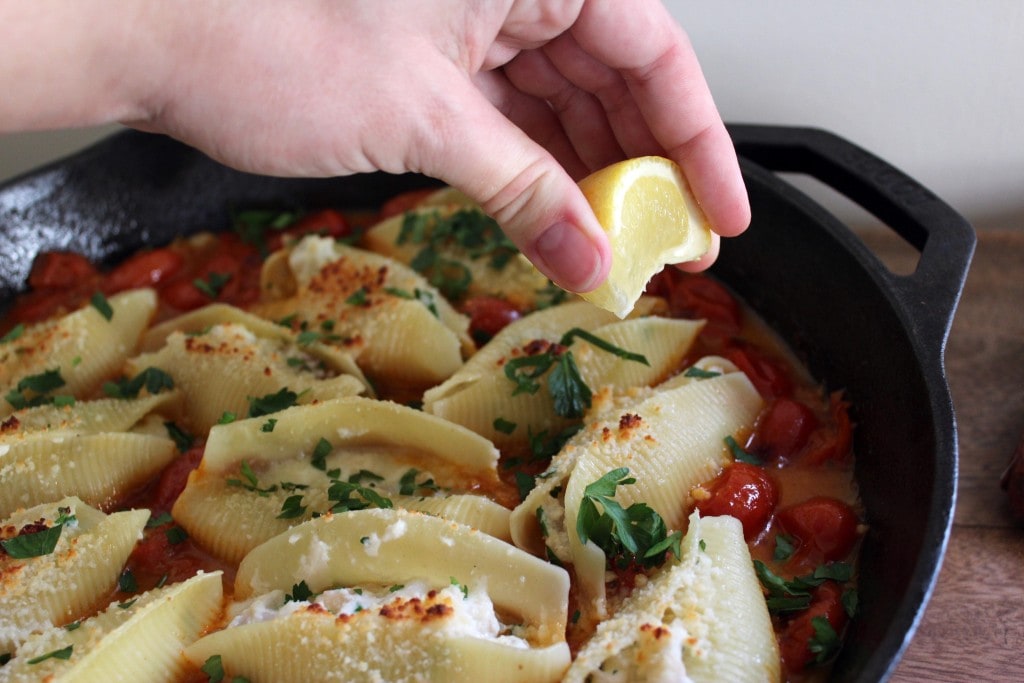 Then EAT for heaven's sake. 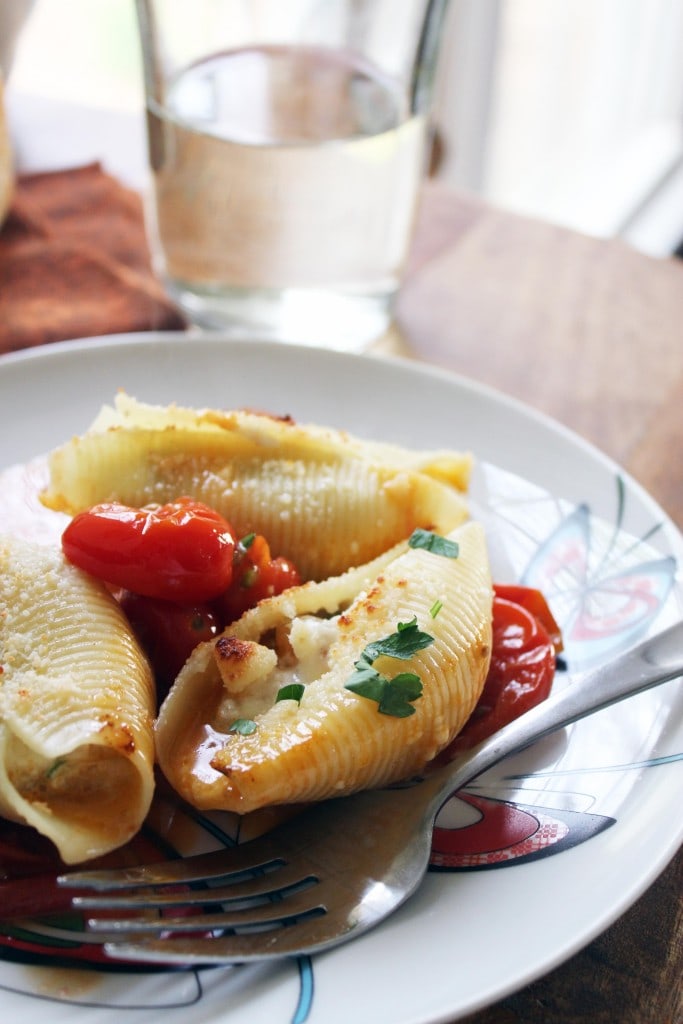 I know this seems a little weird, but please trust me and try it.  The mild cheese and shrimp go great together, and the sauce is a little sharp from the wine and garlic and everything is just GREAT together. 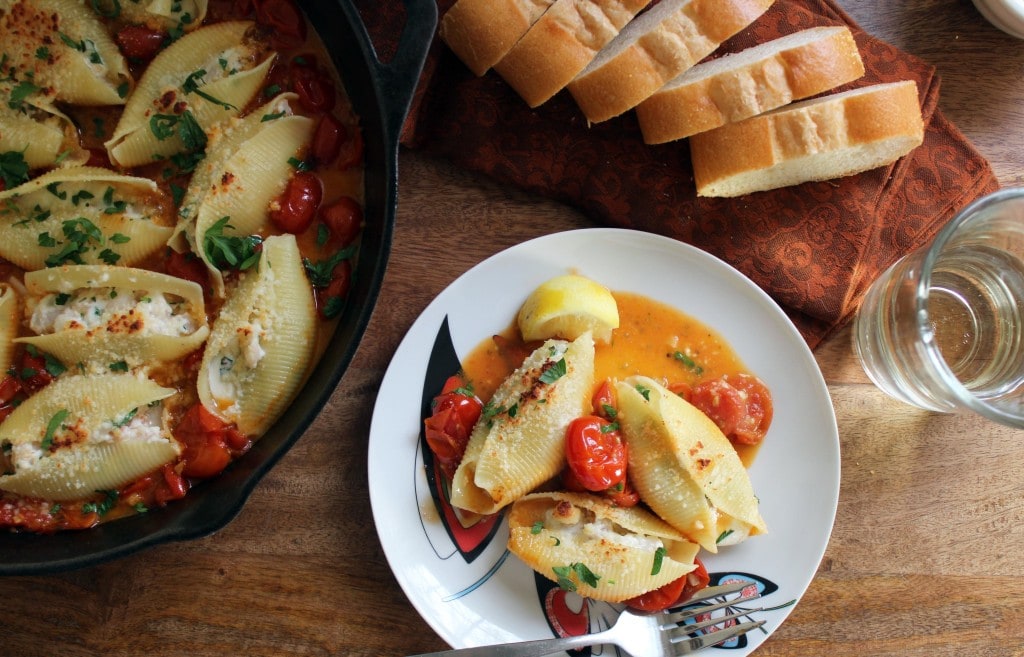 The sauce is amazing on anything, so keep the method around all summer, especially for when we have tons of fresh tomatoes to contend with!  This sauce really likes to make out with bread for dipping.  Promise. 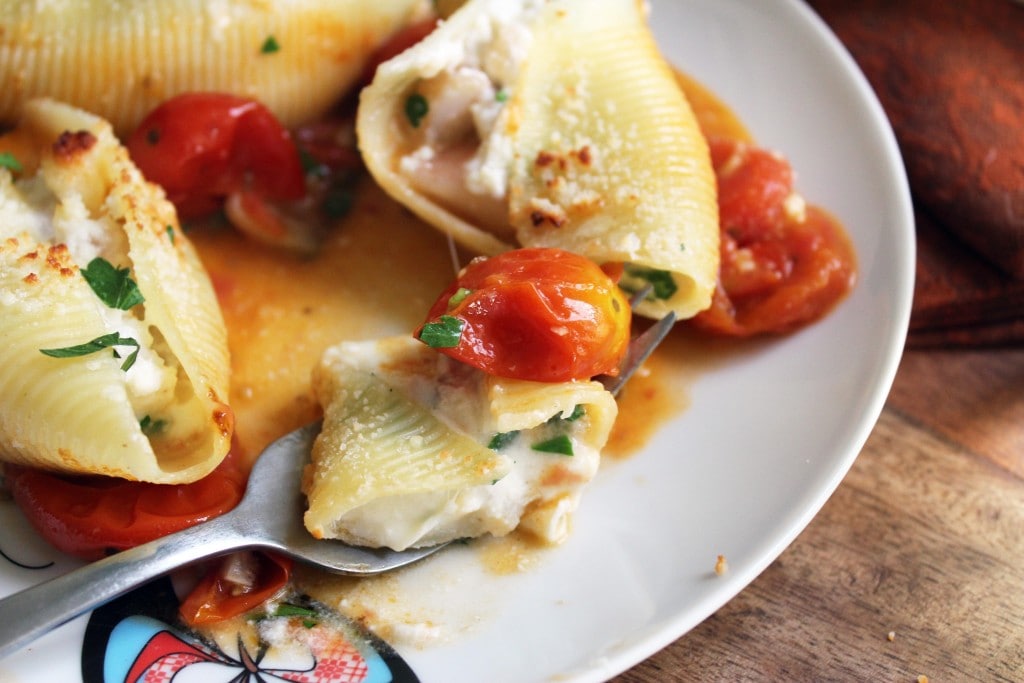