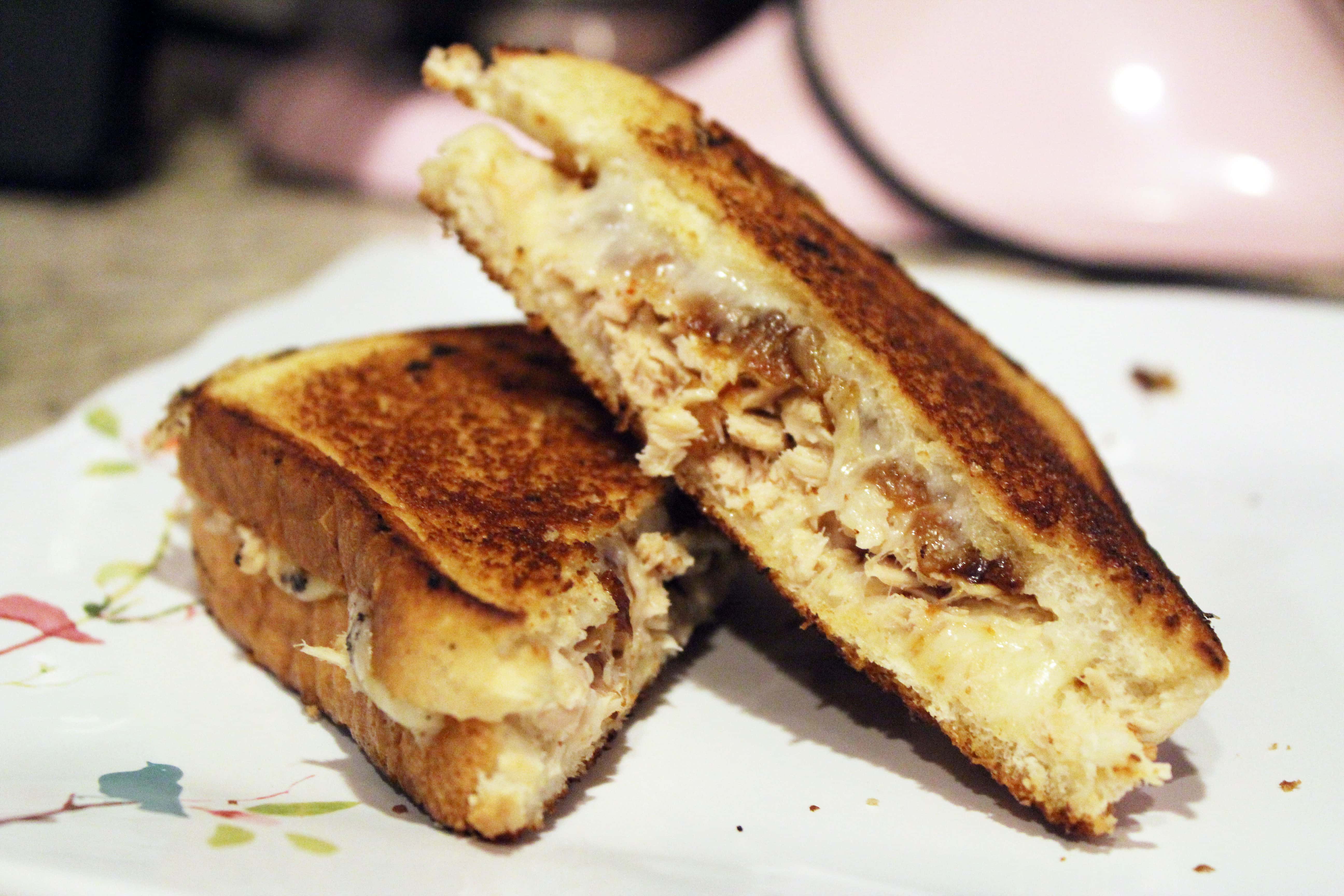 I am having a nice day because I woke up to do yoga like a big girl,  made my lunch and Jay's, was on time to work, and got to laugh at Jay because he was hungover after not drinking very much last night.

In all fairness, he was out late drinking to celebrate the memory of a friend's mother who is being buried this morning, so there was a reason for the hangover - not "I'm a dude, it's Monday, let's go for it."  The guys spent the evening sharing growing up stories, remembering how great John's mom was, and generally enjoying a reason (though a devastating one) to all be back together after years of being grown-ups and not keeping in touch because life got in the way.

What I mean is, sometimes don't you want to just grill some bread with butter and cheese and tuna and EAT IT FOR A LONG PERIOD OF TIME?

Here's the thing about tuna.  I love it.  It's salty and briny and tastes like the ocean but not in a gross way.  It's CHEAP, too! I love fancy tuna melts with herbs and weird stinky cheese and spreads as much as the next food snob, but...

...the regular kind is wonderful too.

Except for that THESE tuna melts have caramelized onions on them.

So good!  And, caramelized onions are zero work, so we're not making a sandwich night overly complicated.

Do remember, though, that caramelized onions take AT LEAST 40 minutes to get super dark brown and sugary.  You can rush them with a bit of brown sugar, water, and high heat, but if you have other things to do (laundry, boxed wine consumption, dishes, dog walking, napping, E! watching, homework, weeding, smoking weed, smoking salmon, fishing, cleaning....you get the idea), then you can just start the onions, wander off, stir them every ten minutes, and continue to live your life.

Alternatively, you could caramelize a TON of onions some time when you have a little bit of free time, keep them in the fridge, and put them on everything.  They're so great, why not!

In any case, you'll want to grab bread, canned tuna, butter, sliced swiss cheese, and an onion. That's it!  You'll need salt and crushed red pepper for the onions, but this is seriously easy stuff. 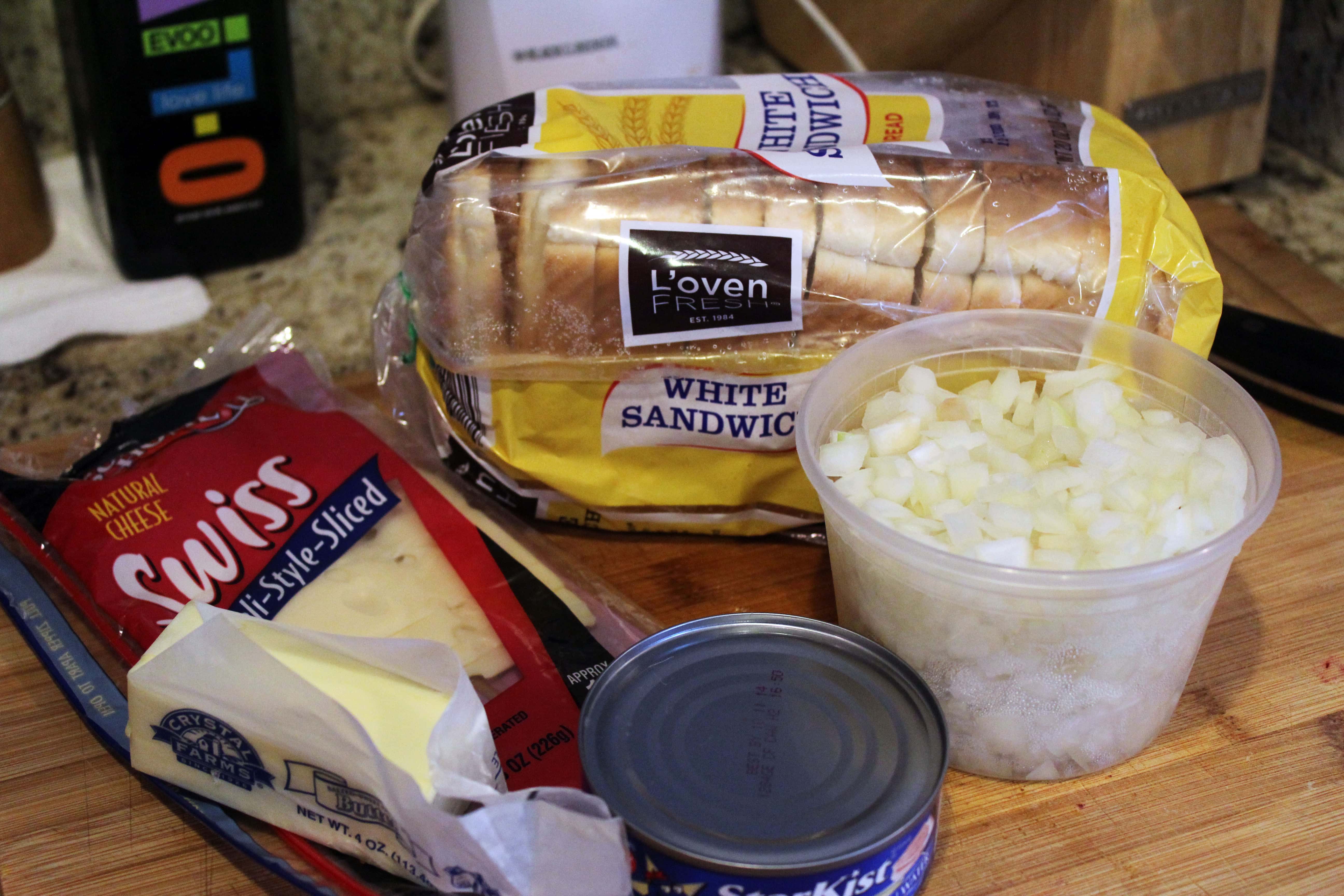 One can of tuna is enough for 2 sandwiches, BTW.

So.  You chop or thinly slice the onion.  ¼ large onion per sandwich is about right - they cook down a TON.  Mine was already chopped because I accidentally bought a bag of onions with one rotten one but didn't open the bag until 4 had rotted so I chopped up the onion halves that weren't rotted and kept them in my fridge.  It happens.

Put the onion in a pan over low heat with 1 tablespoon of butter, a sprinkle of salt, and a sprinkle of crushed red pepper - as much as you'd like! 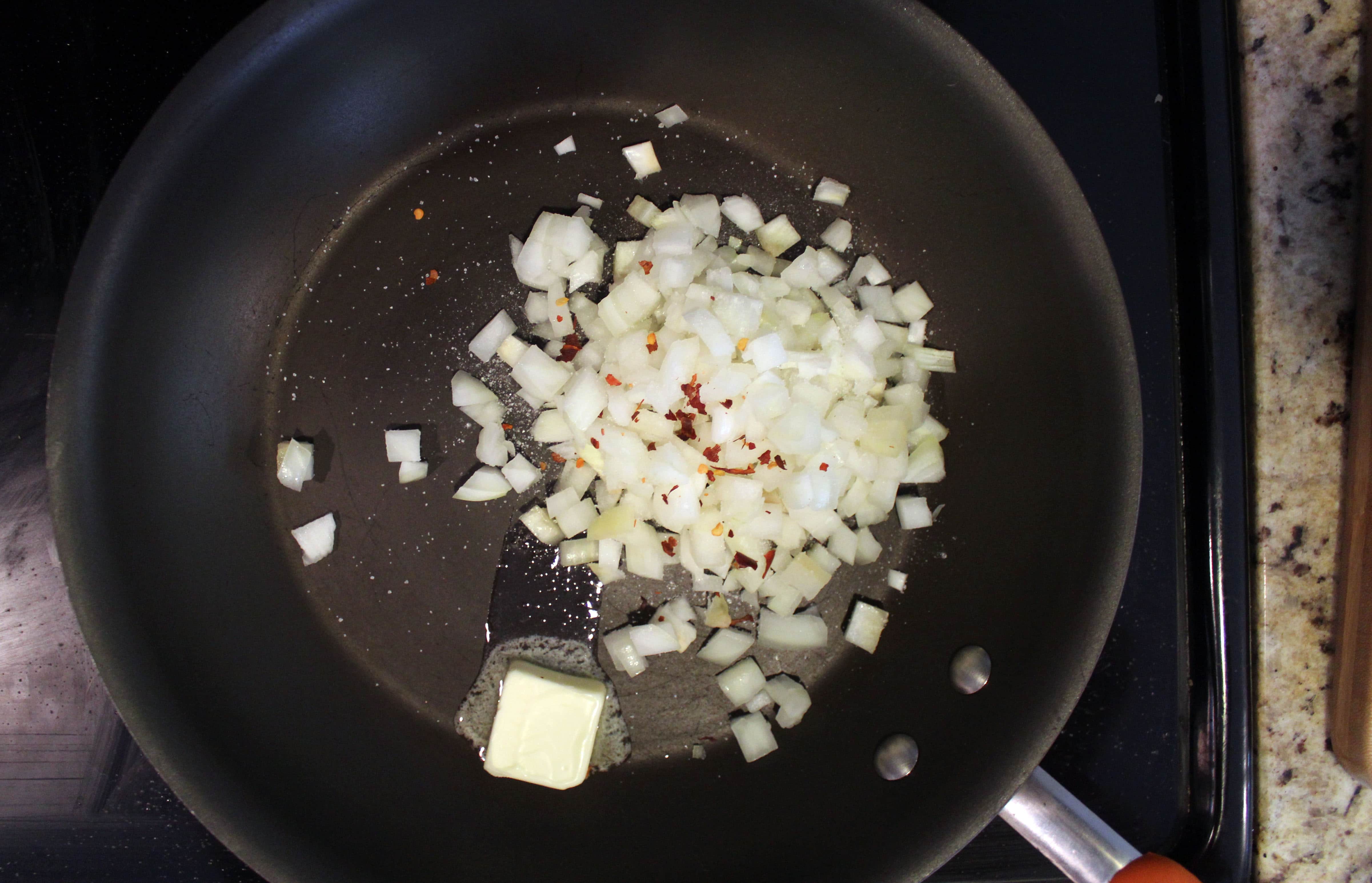 BTW - if you're making the sandwiches right after the onions are done, leave the butter out.  45 minutes is a good amount of time for it to soften so you don't kill your bread when MELT TIME arrives.

Melt time is a thing.

Let the butter melt slowly and stir the onions around to coat, then walk away.  Check the onions after ten minutes - if they're sizzling, turn the heat down and add some water to prevent browning.  If they're not doing ANYTHING, turn the heat up a bit.  They should be translucent but not brown at all after the first 10 minutes.

Keep living your life and stirring the onions every once in awhile as they slowly break down.  I like adding water because I know if I wander off for too long they won't stick or dry out on me, but that's just because I'm a basket case.  It does help, though! 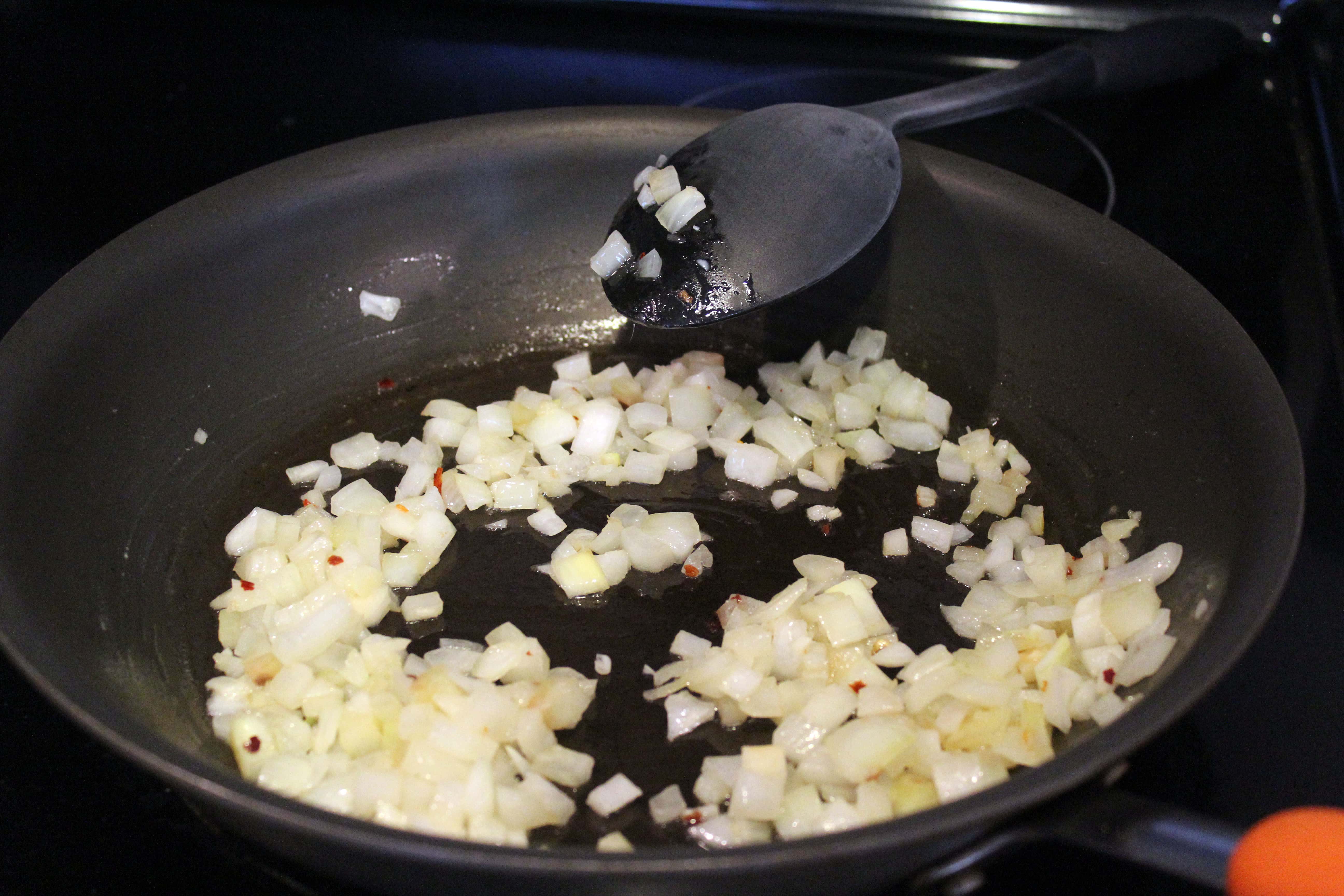 These onions aren't anywhere close to being done.

When the onions are dark brown in color (the color of caramel.  duh.), turn off the heat and get ready to start your sandwiches!  I used the same pan for these because I was only making two, but heat a griddle, grill pan, or skillet to medium heat.  We don't want the pan too hot because then the outsides of the bread would burn before the cheese melted and that would be a crying shame. 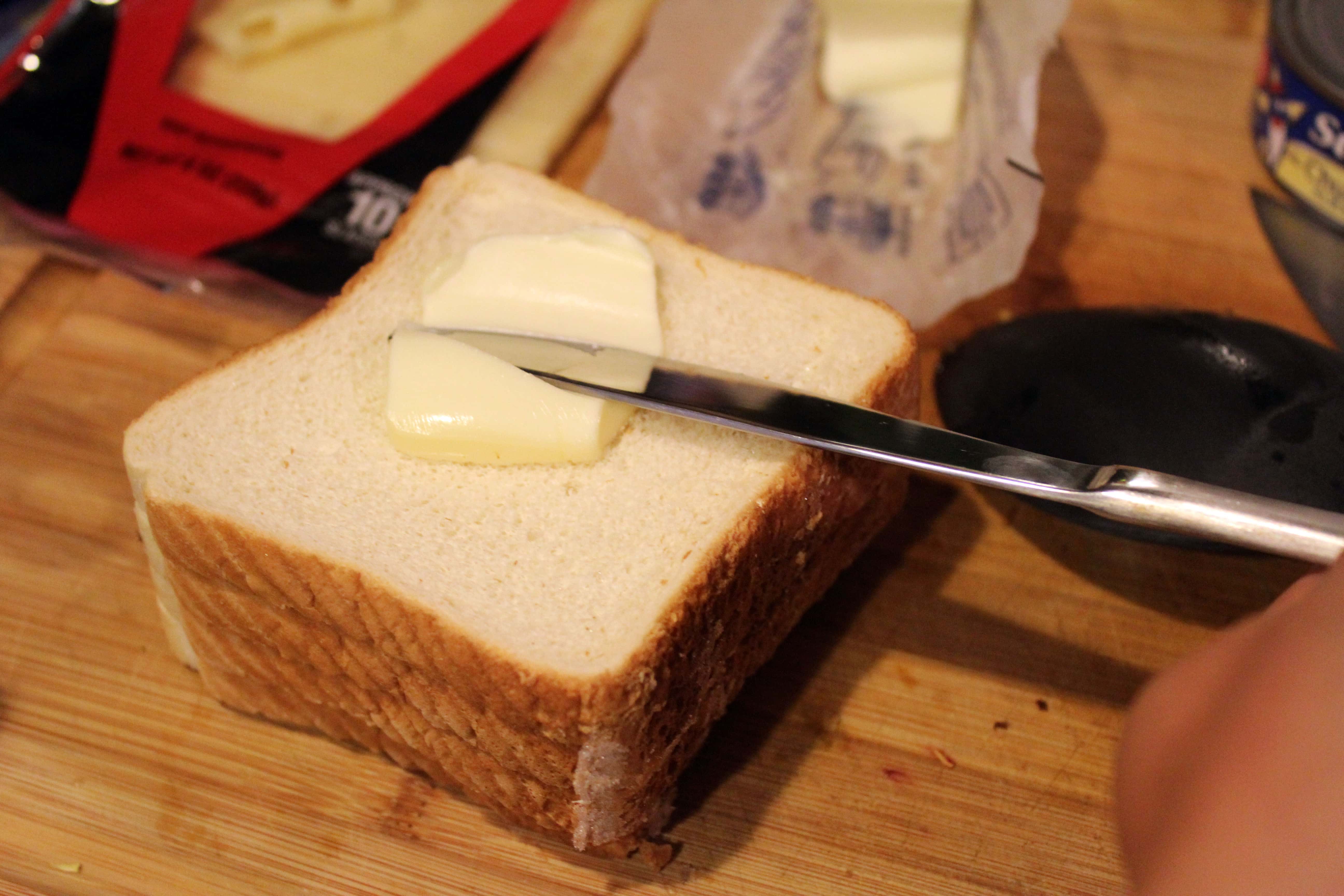 Top the bread with one piece of cheese. 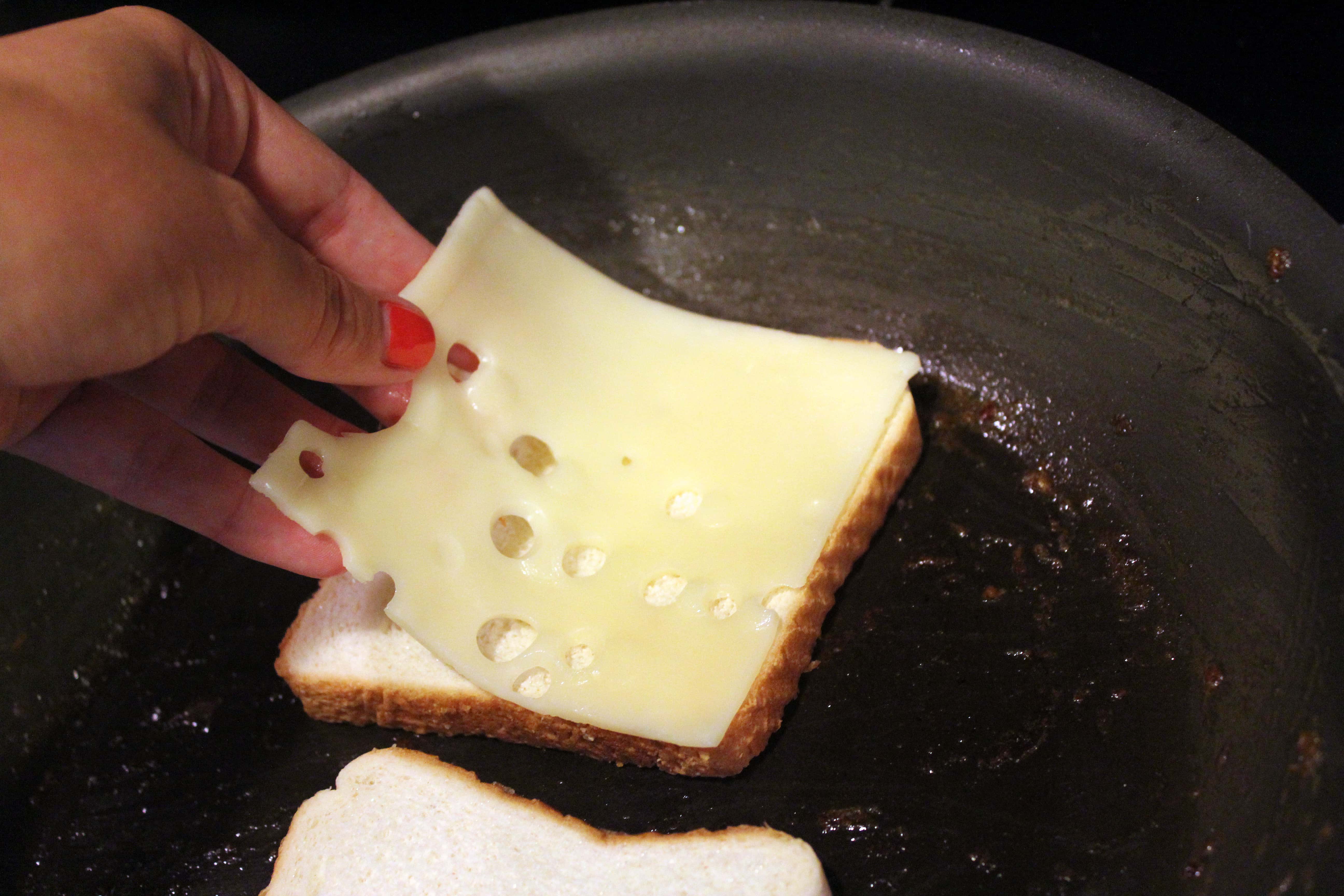 Then, drain the tuna and use a fork to flake half a can of tuna onto the sandwich.  YUM!  I don't add ANYTHING to the tuna because I like it and find that mayo and other add-ins just take away from the onion, cheese, tuna combo that I'm going for.  That's just me though. 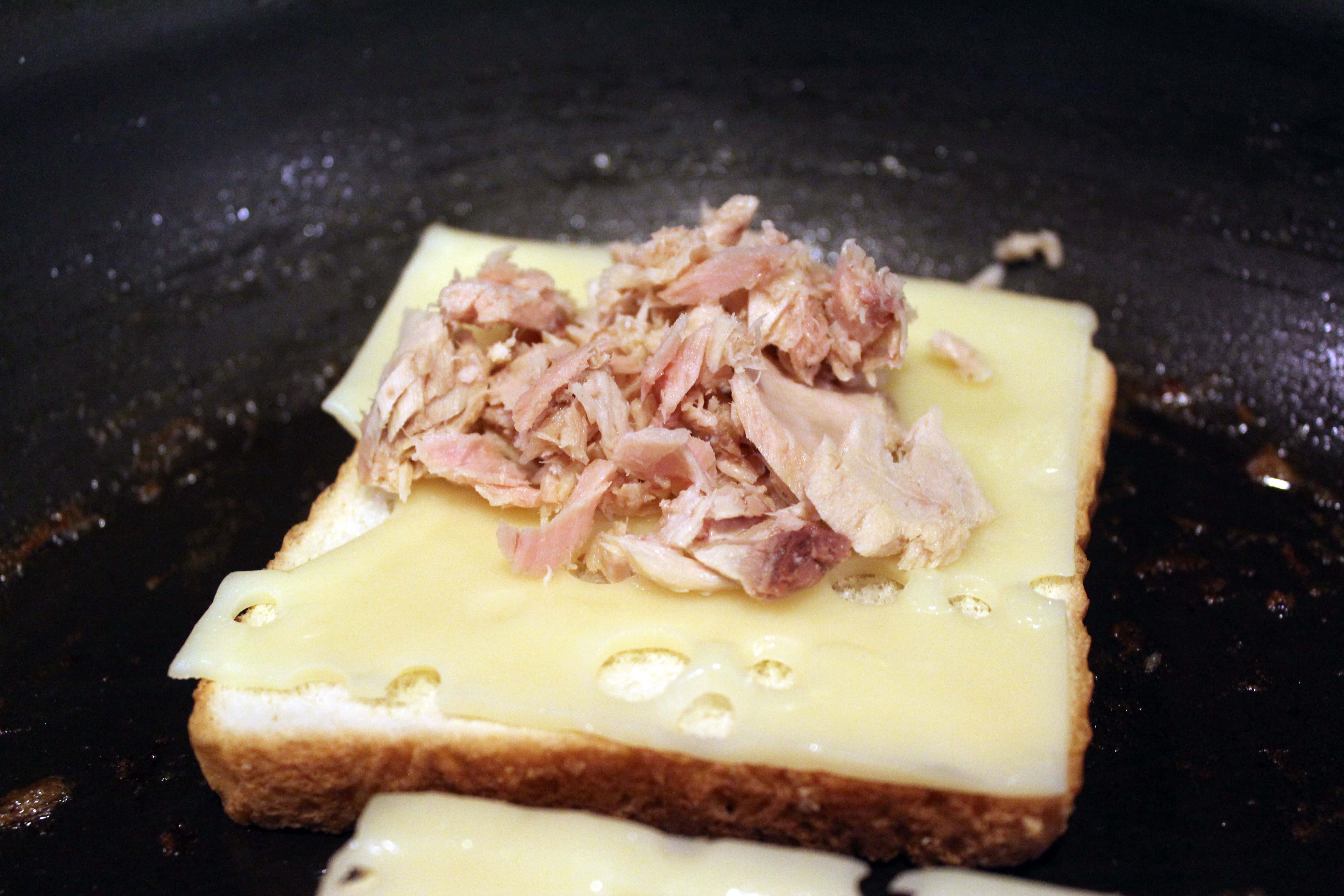 Top the tuna with caramelized onions - divide them evenly between the sandwiches. 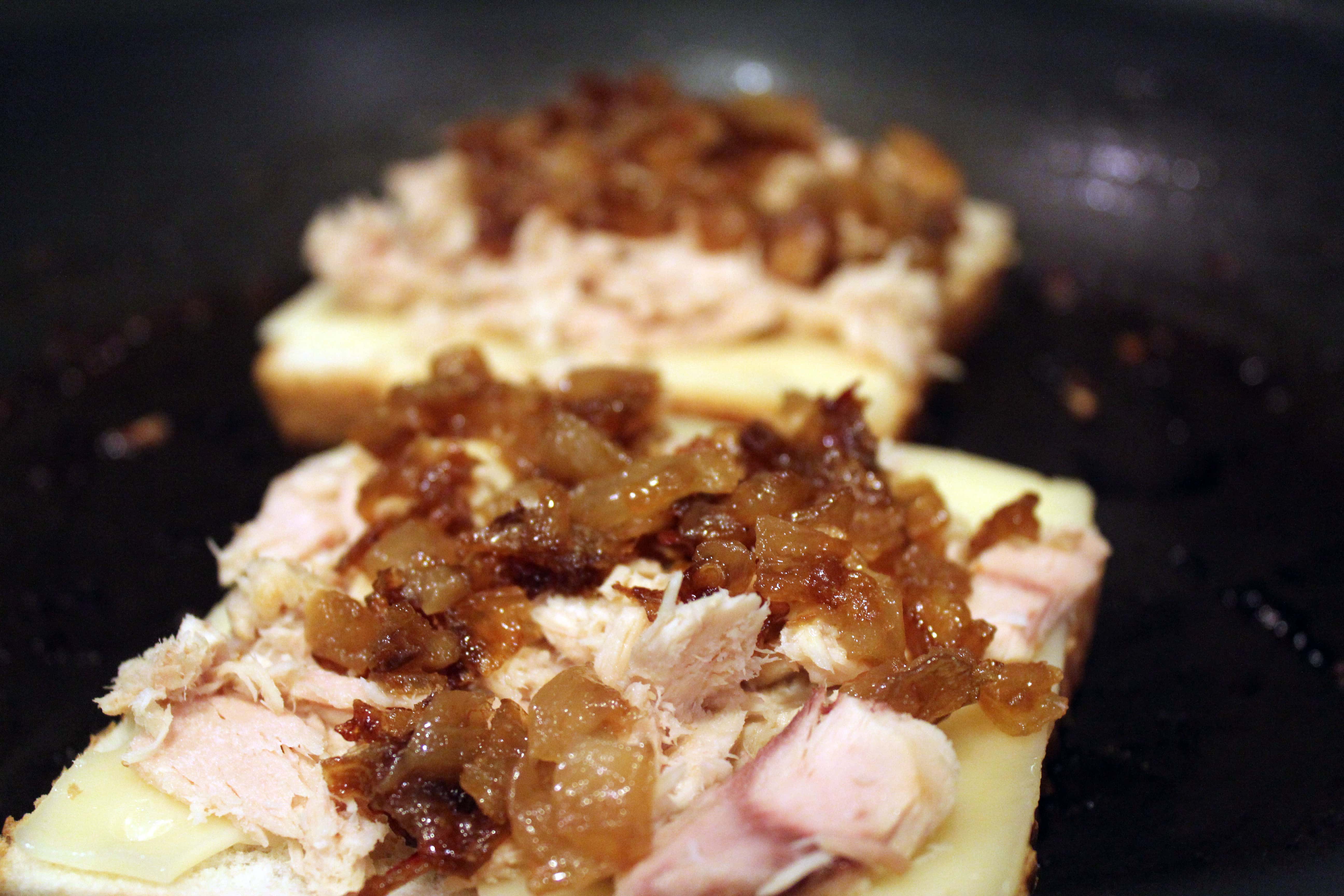 Top the onions with another slice of cheese... 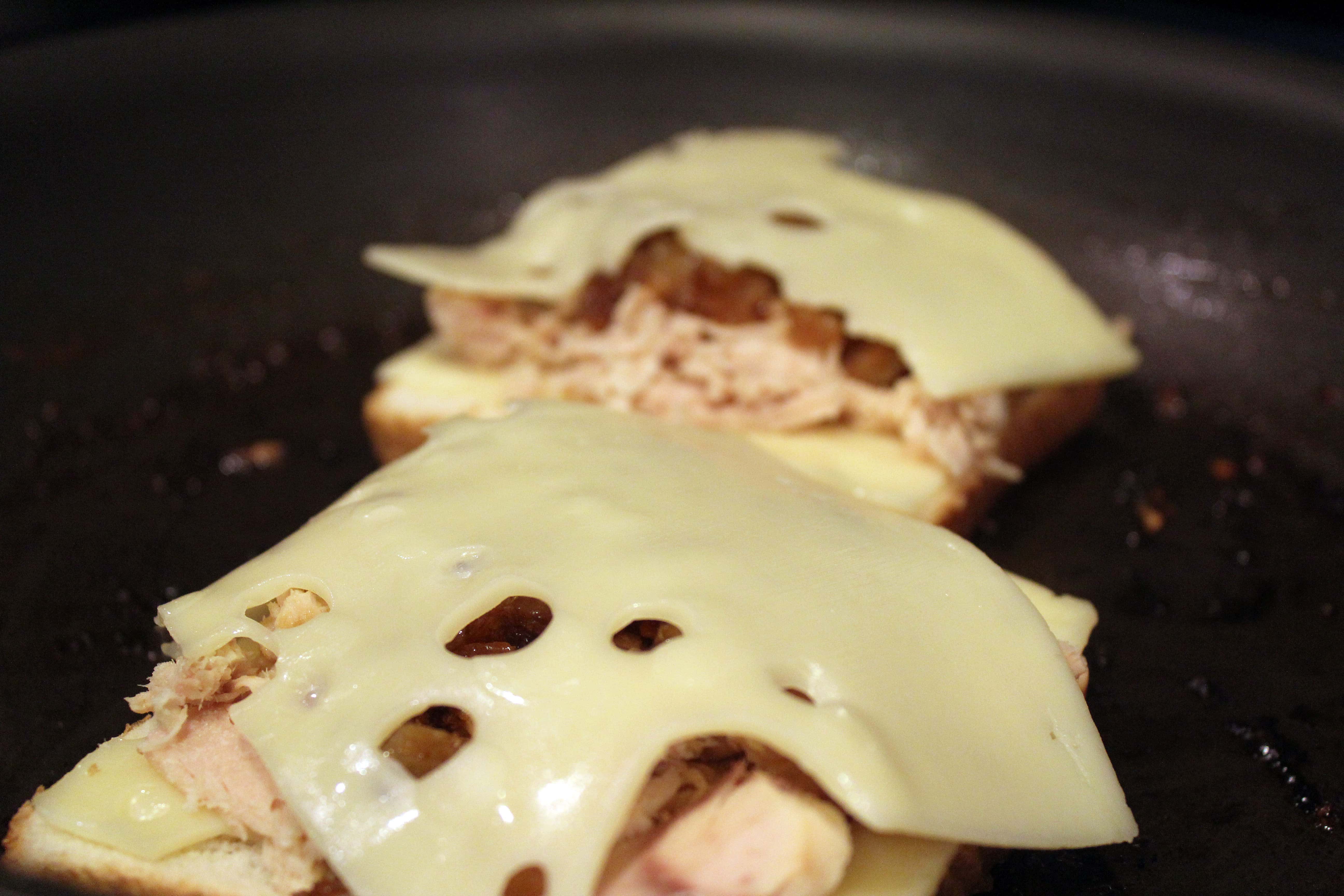 ....and top that with another slice of buttered bread - buttered side UP. 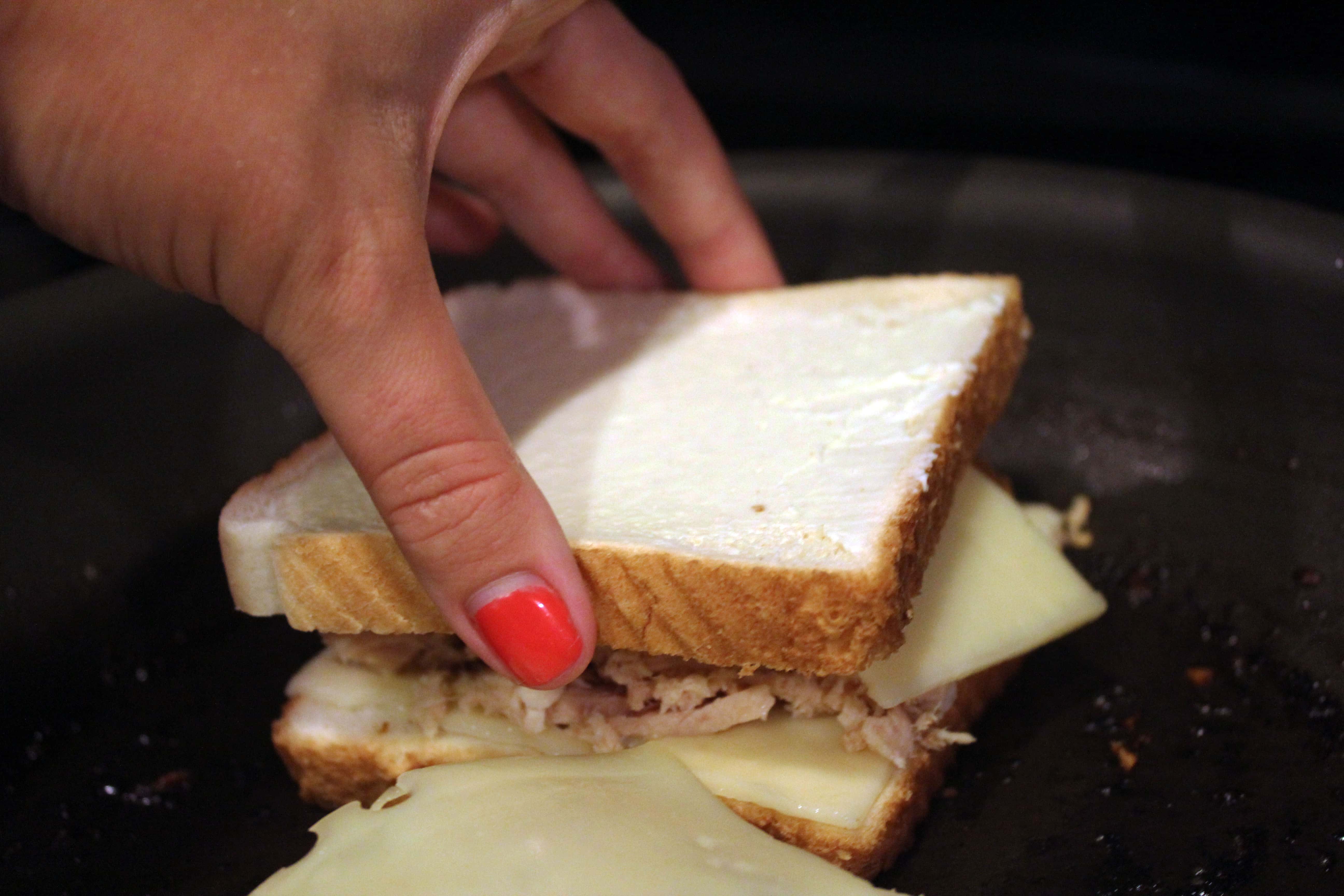 Yum!  Let the sandwiches sit for a minute until the top slice of cheese starts to melt and the bottom bread is brown.

Then, flip 'em over! 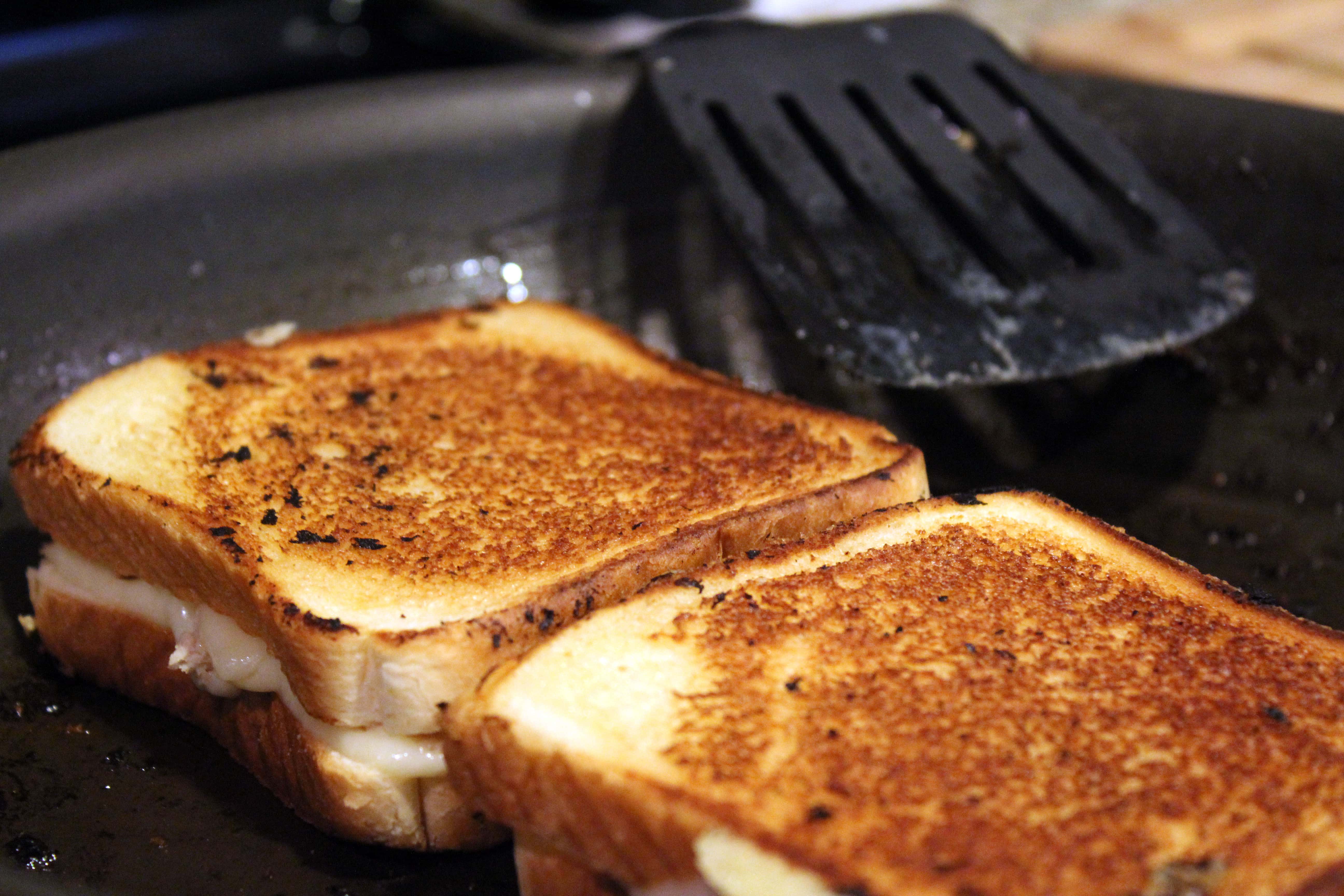 Perfect.  Let the sandwiches grill for 3 or 4 more minutes until both sides are toasty and golden and the cheese is all melted.

Folks.  These are DELICIOUS.  Of course you could doctor them any way you like, but I really like them plain this way!

Cut them on a diagonal and feel happy and festive as you eat these. I served them with tomatoes, basil, and salt.  Serve them with any veggie you like, though - and your favorite boxed wine. 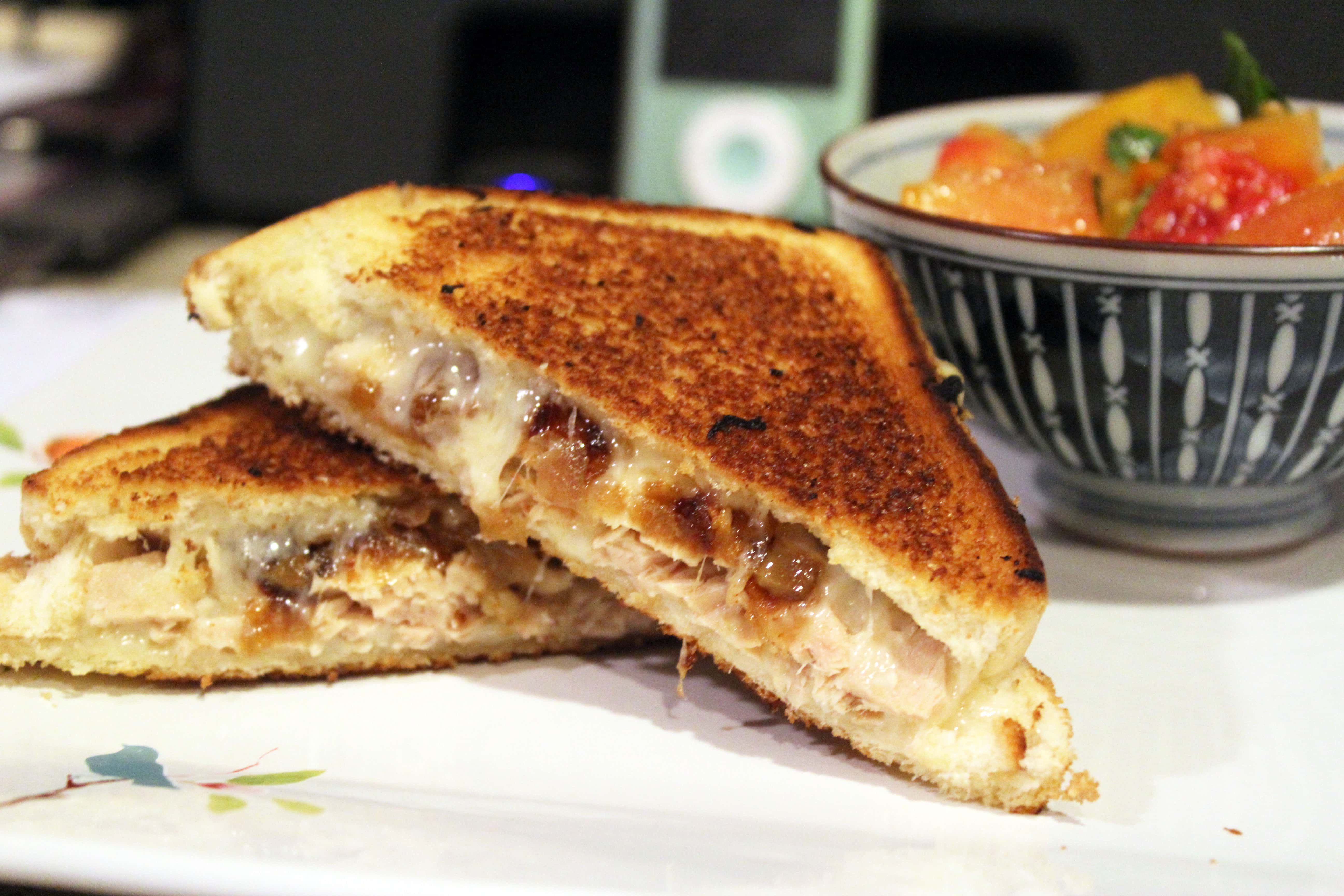 Oh, and don't forget to enter our first Facebook giveaway!  Head over to our Facebook page and enter.  It's easy!

« The Weekend + GIVEAWAY
A Request Not Relating to Facebook »