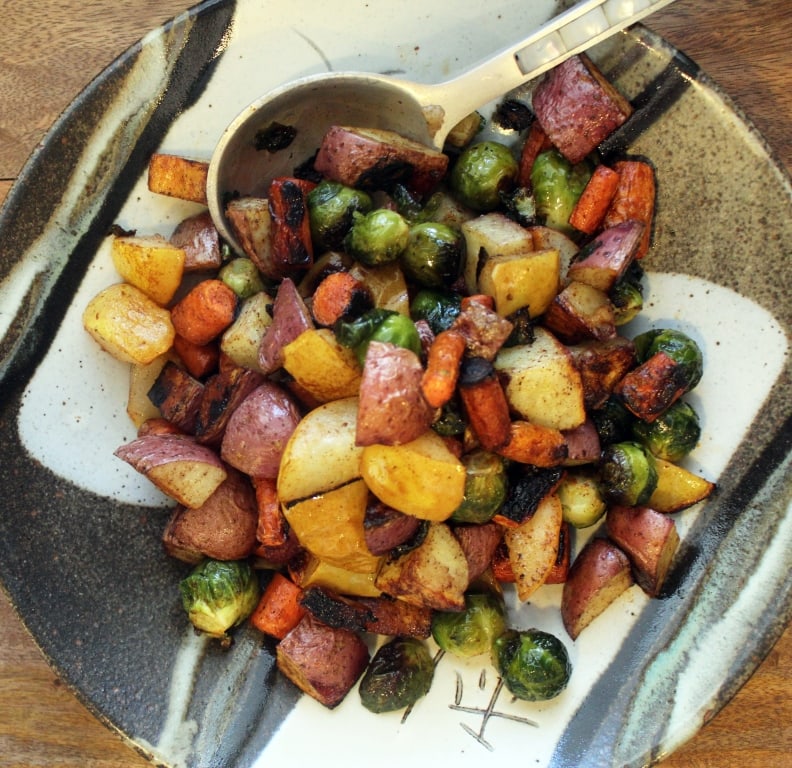 It's been awhile since vegan week, and we DEFINITELY need a new vegan recipe. We also need something that tastes like fall, because that's like sotrendyrightnow and omgijustlovefallsoMUCH.

I'm sort of ... not that obsessed, but there are some lovely flavors associated with fall, and we can highlight them on roasted veggies!  Roasted veggies have such a nice earthy quality ANYWAY, so adding some warm spices make them even more delicious.

For this particular dish, you need potatoes, carrots, pears, Brussels sprouts, olive oil, smoked paprika, allspice, cinnamon, and salt.  If you don't have smoked paprika don't freak out, just use regular or skip it and move on with your world.  It'll be delicious regardless! 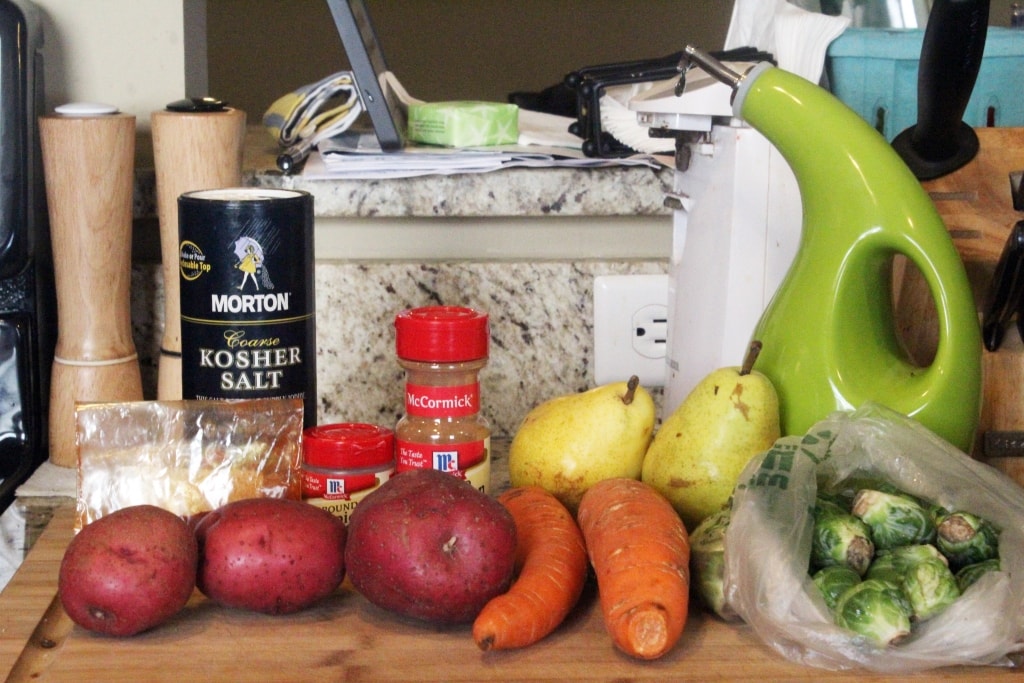 First, preheat the oven to 500F - we don't want to take all day here.  While the oven is preheating, scrub the carrots and potatoes.  Cut the carrots into 1-inch or so chunks. 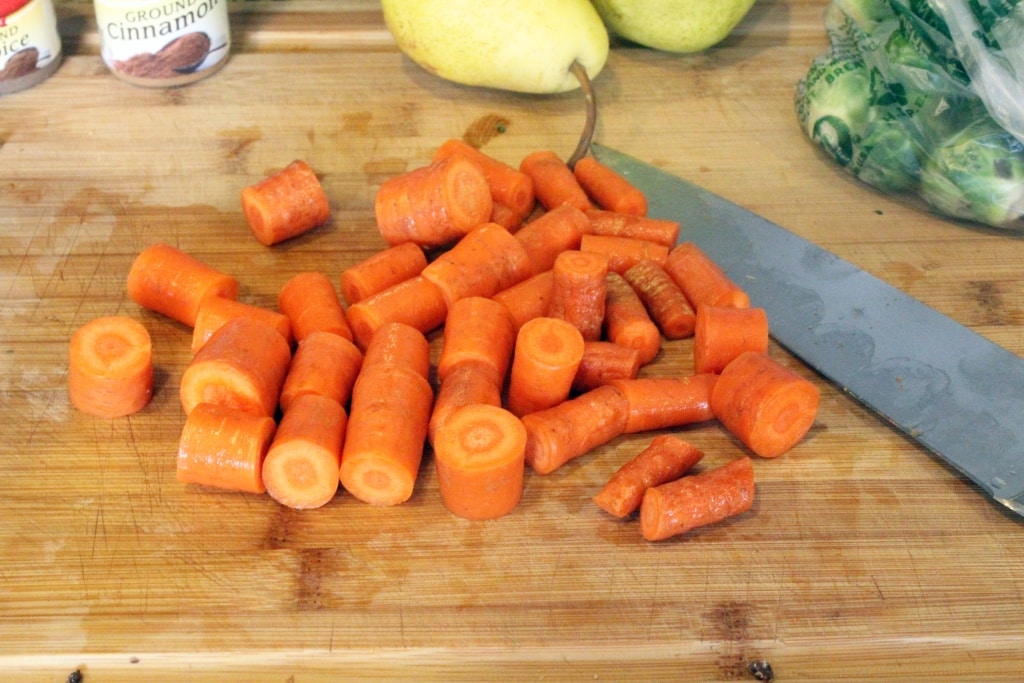 Then, cut the potatoes into similar chunks.  We'll cook these first since the pears and Brussels don't need quite as long.  I had red potatoes, and love the color combo here, BUT any potatoes would work fine in this dish. 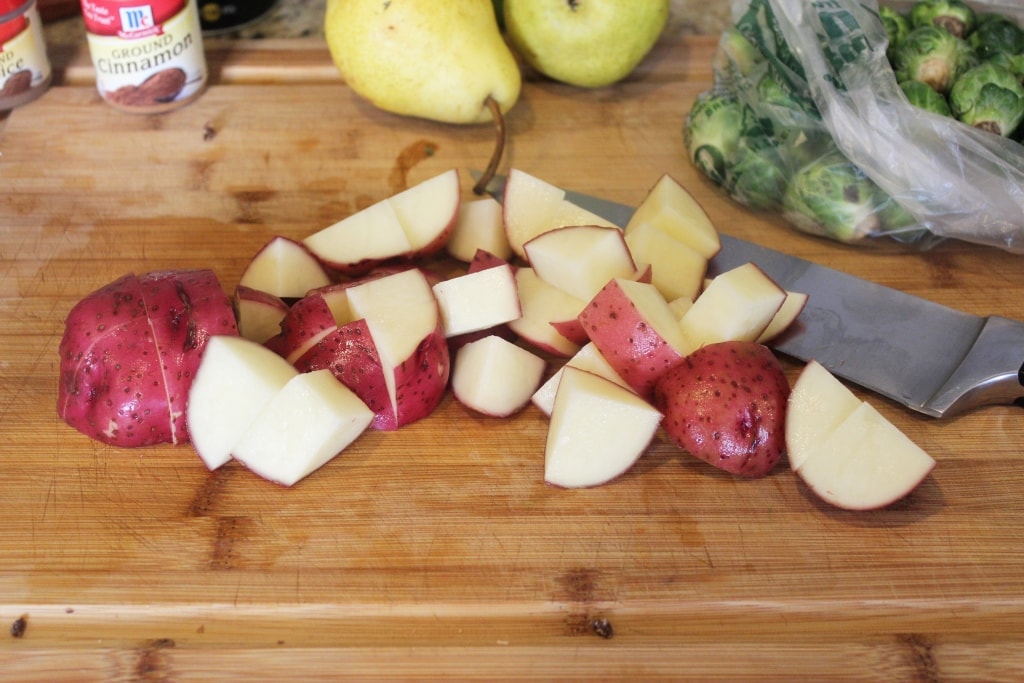 To a bowl, add the carrots and potatoes. 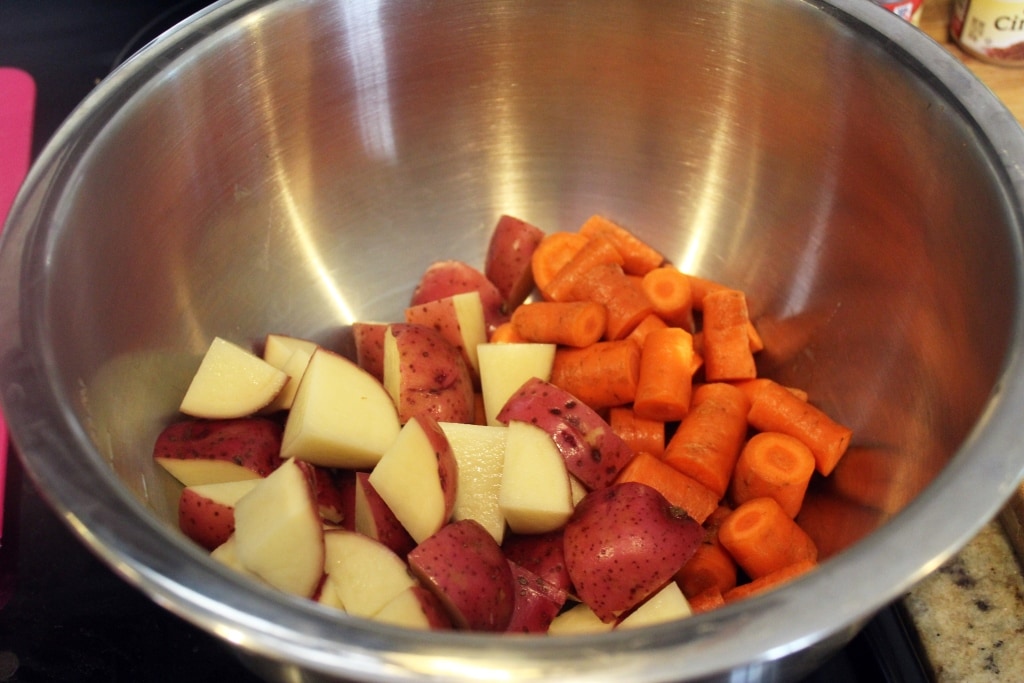 Drizzle them with olive oil - just enough to coat. 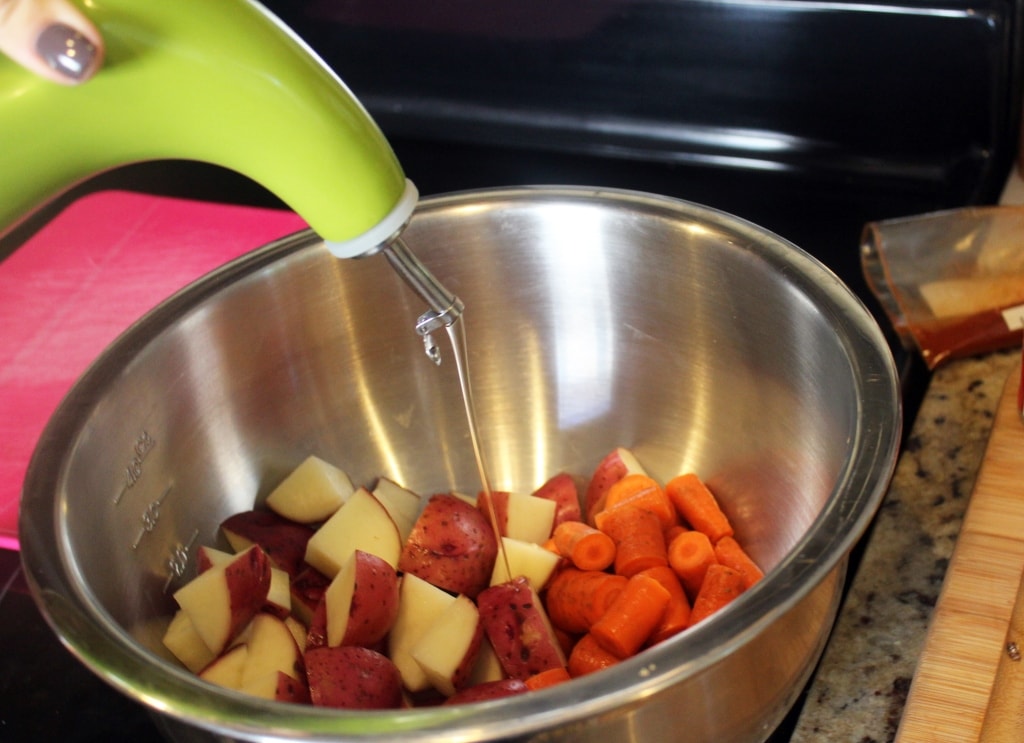 Then sprinkle on the spices!  I love these smells. 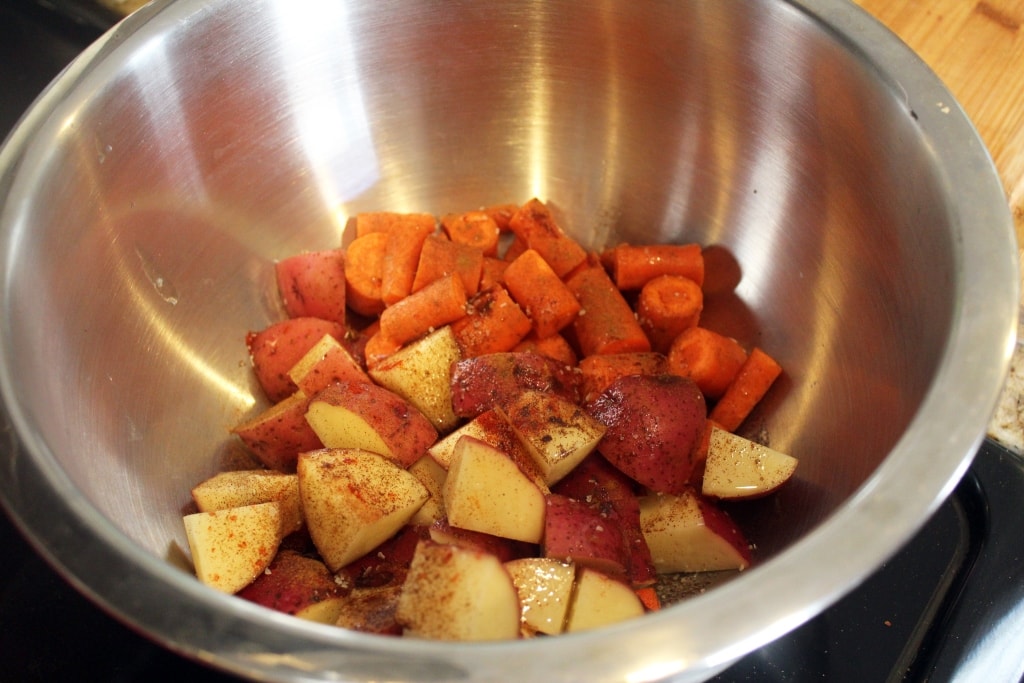 Mix the spices and olive oil with the veggies. 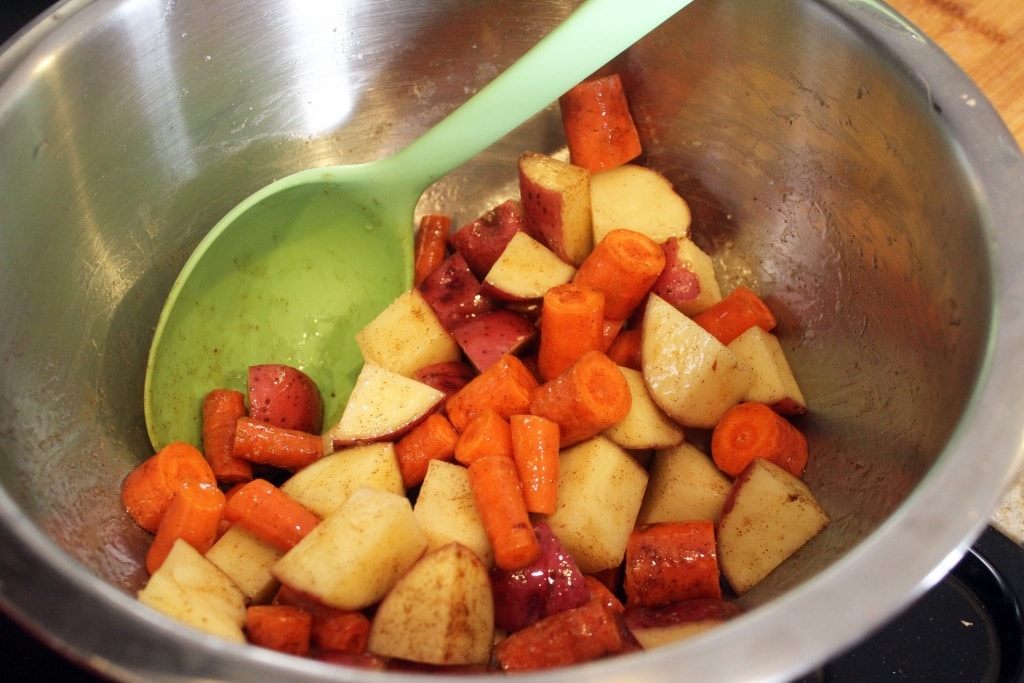 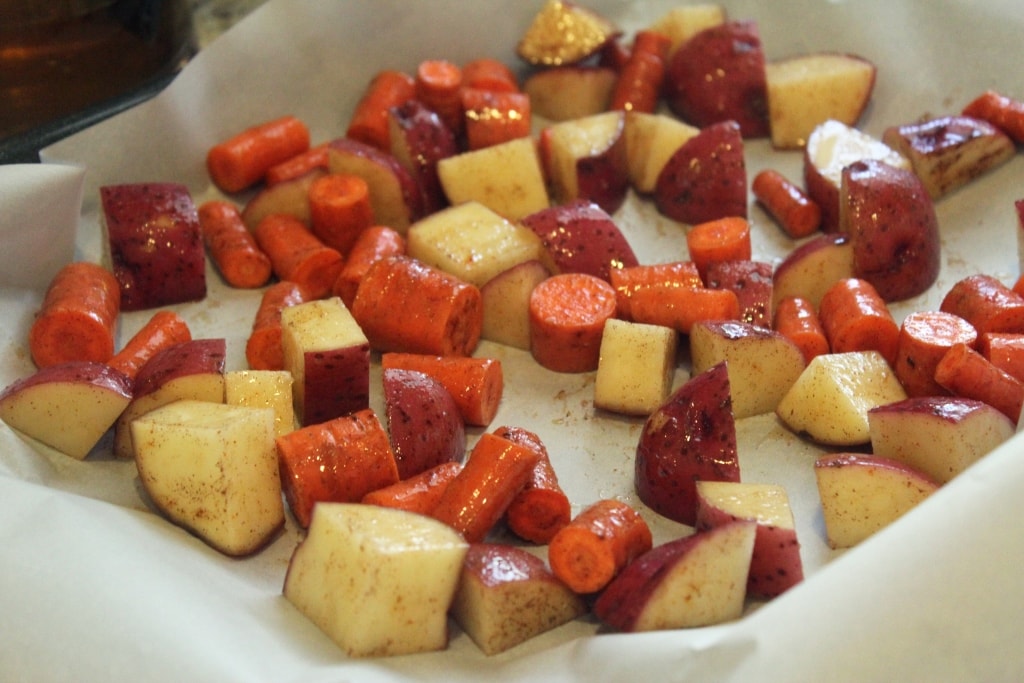 While the first half of roasting is happening, trim the ends off the Brussels sprouts.  Mine were teeny, but if yours are much larger than the potato/carrot chunks cut them in half or quarters. 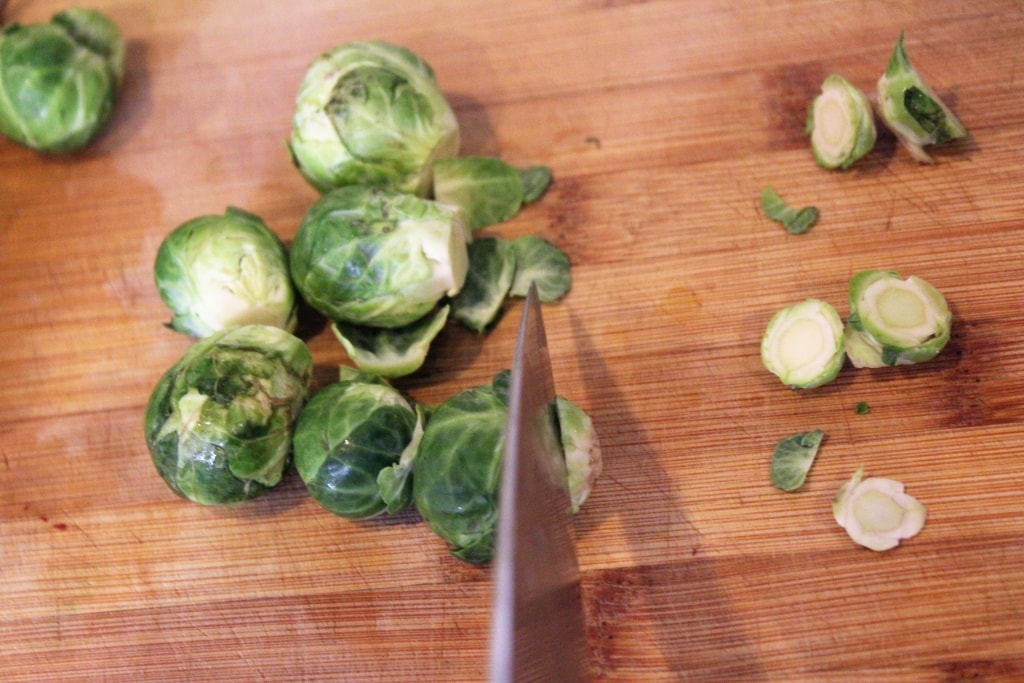 Then, cut up the pear! I cut around the core (and give it to my dogs because they eat anything)... 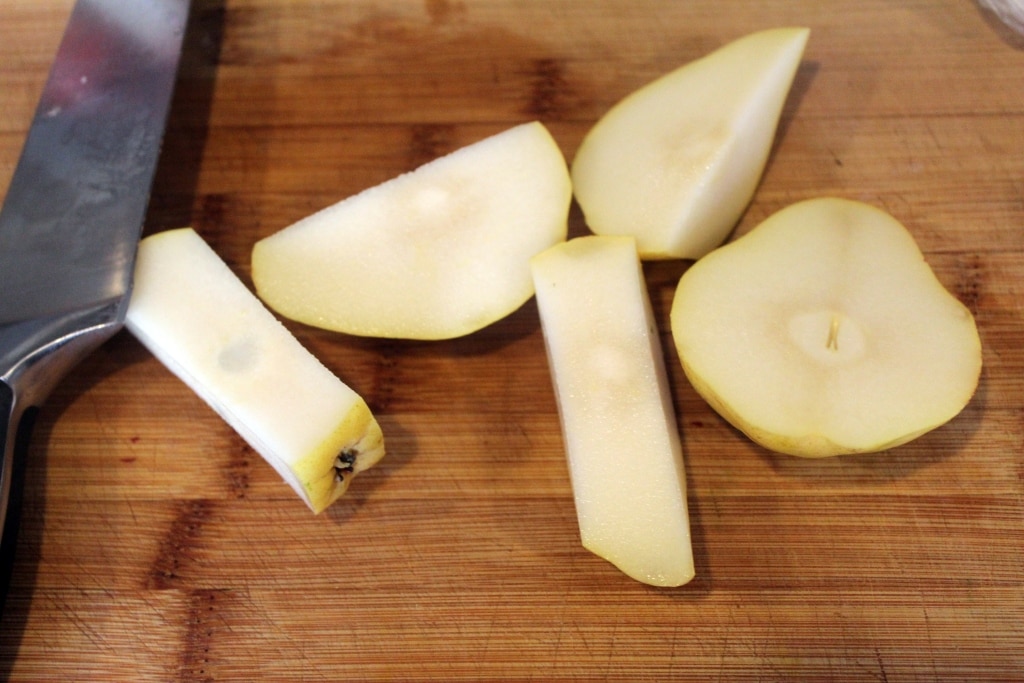 ...then cut the pieces into chunks. 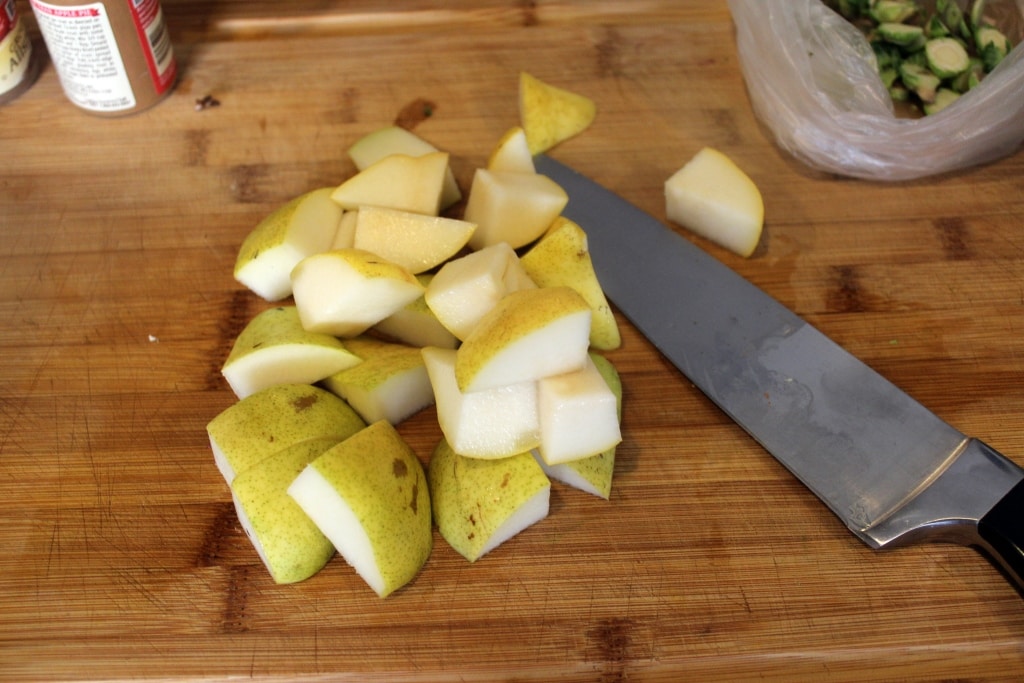 Now, just like with the first round of veggies, add the olive oil and spices to the bowl, then gently mix together so the pears don't bruise. 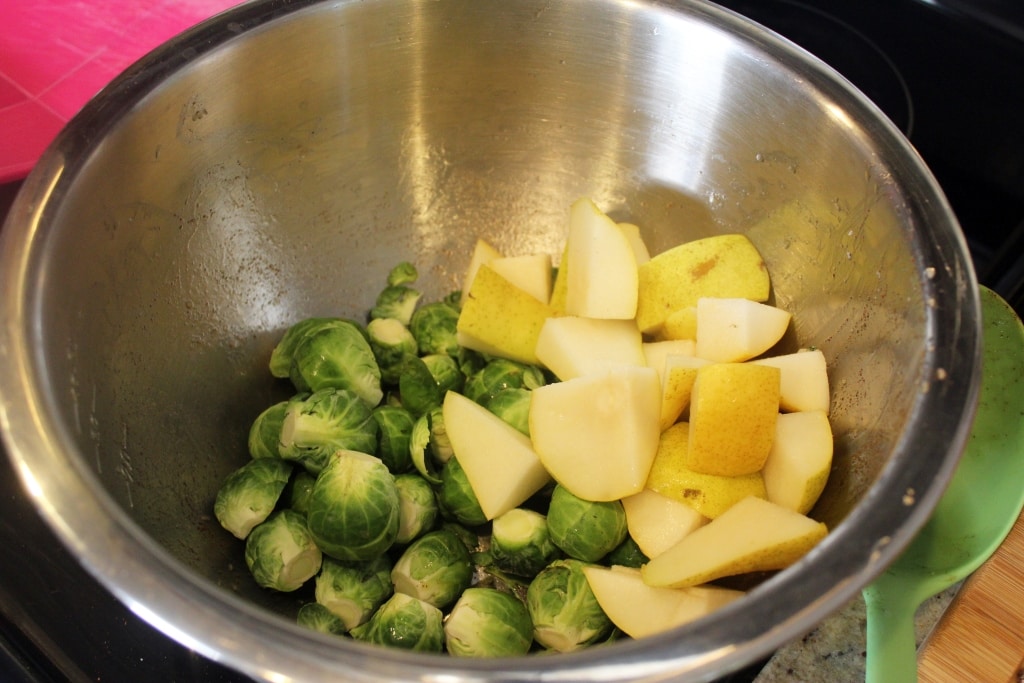 Now, the potatoes and carrots should be halfway cooked. 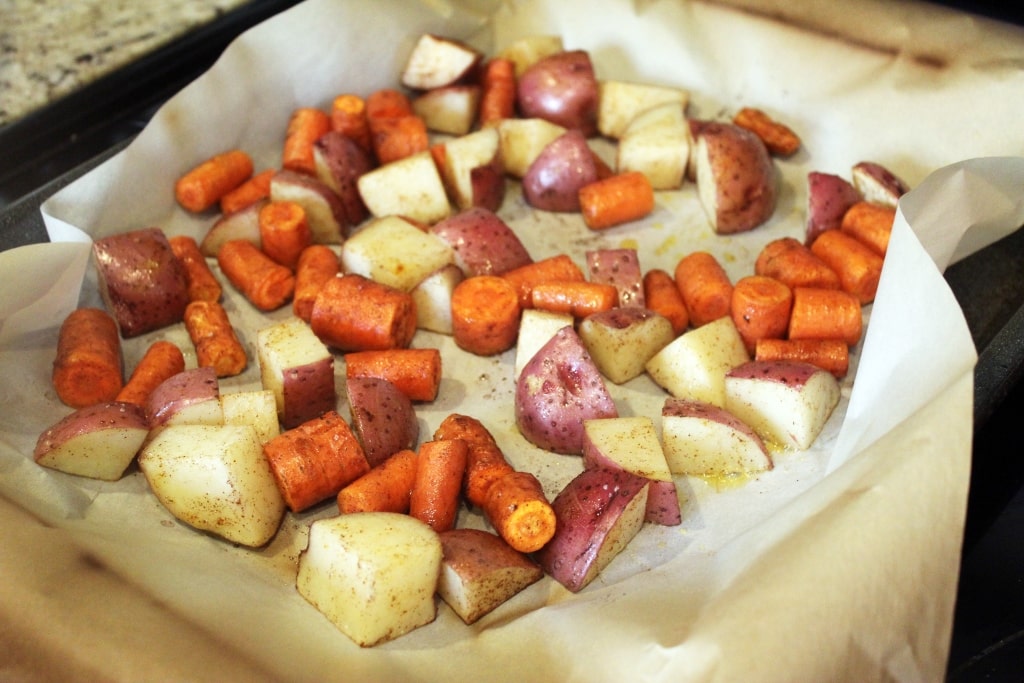 Add the pears and Brussels to the pan, spreading them around so they're pretty much all in one layer. 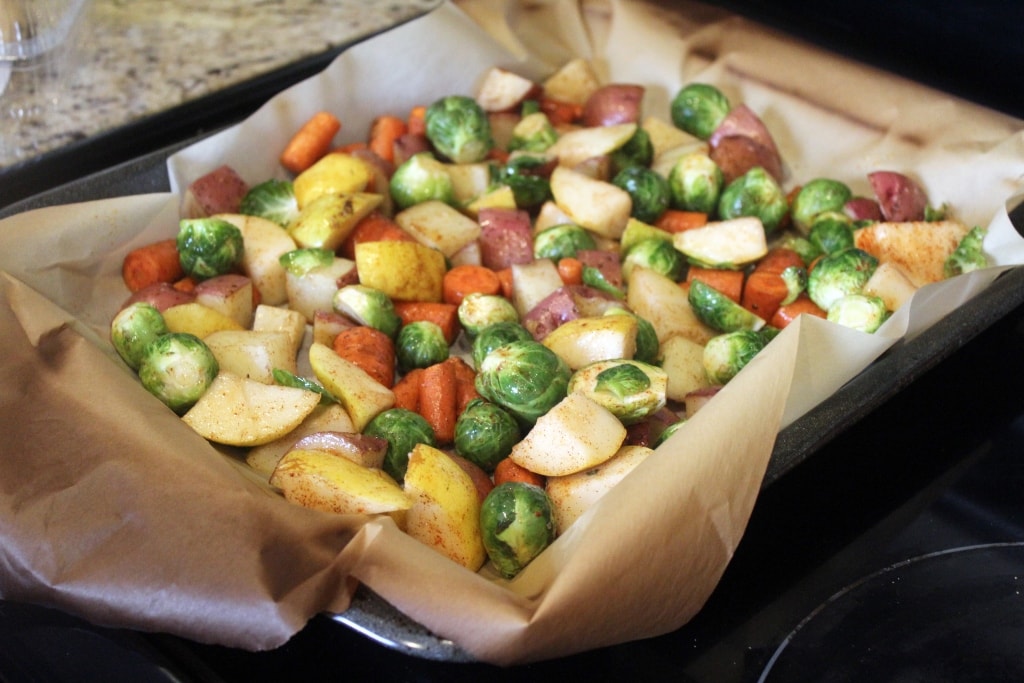 If you're using a small pan or doubling the recipe, use two pans on two racks, and rotate them halfway through each cooking time. 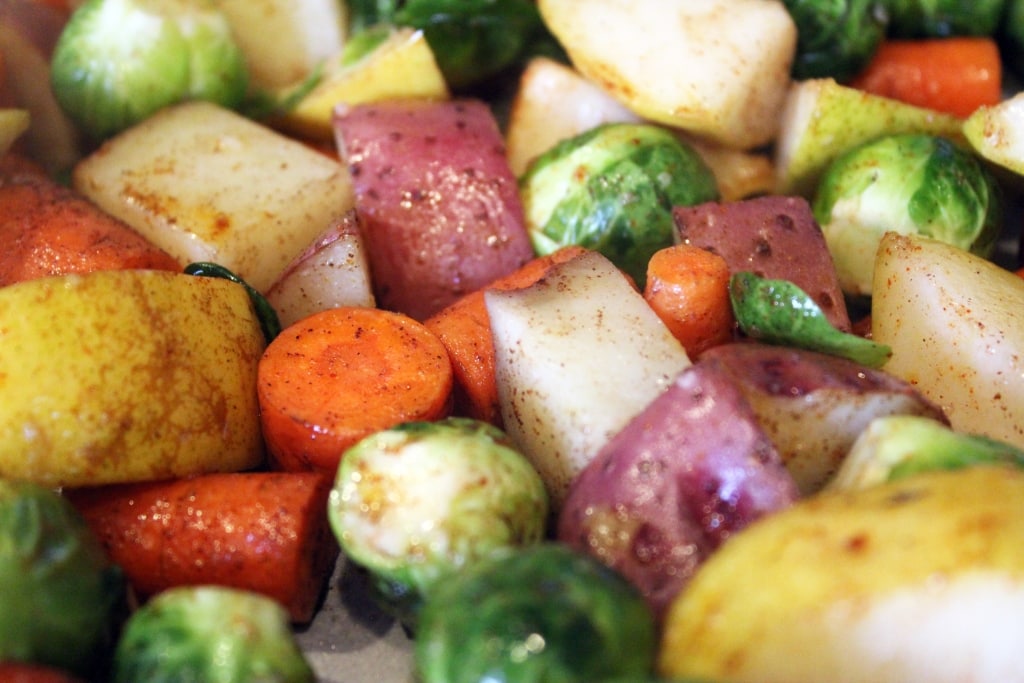 This is a GREAT use-up for pears, by the way - pears that are unripe work as well as super ripe ones, so don't freak about about the freshness.  Roasted fruit just kind of WORKS. 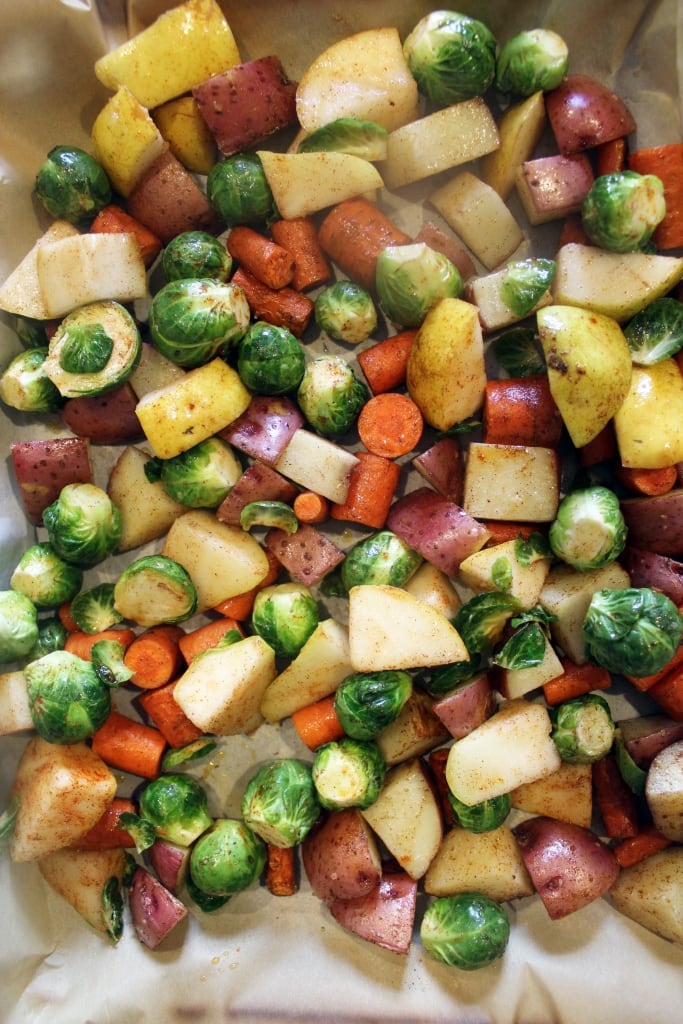 Roast the veggies all together for 10 - 15 minutes more until the brussels have softened but aren't totally mushy.  Stir the veggies halfway through so they don't burn on the bottom. 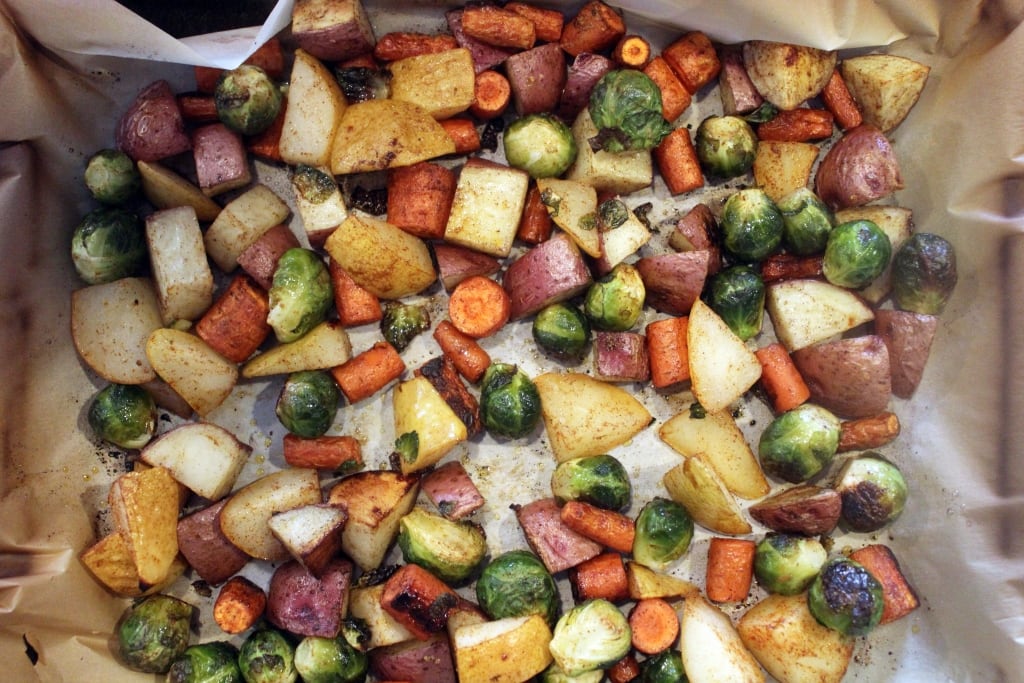 Look how pretty!  My total cooking time was about 25 minutes (for both rounds of cooking), but yours might be slightly more or less.  The veggies are done when they're....done.  Just test them with a fork - if it goes easily through a potato or carrot the rest will be done as well. 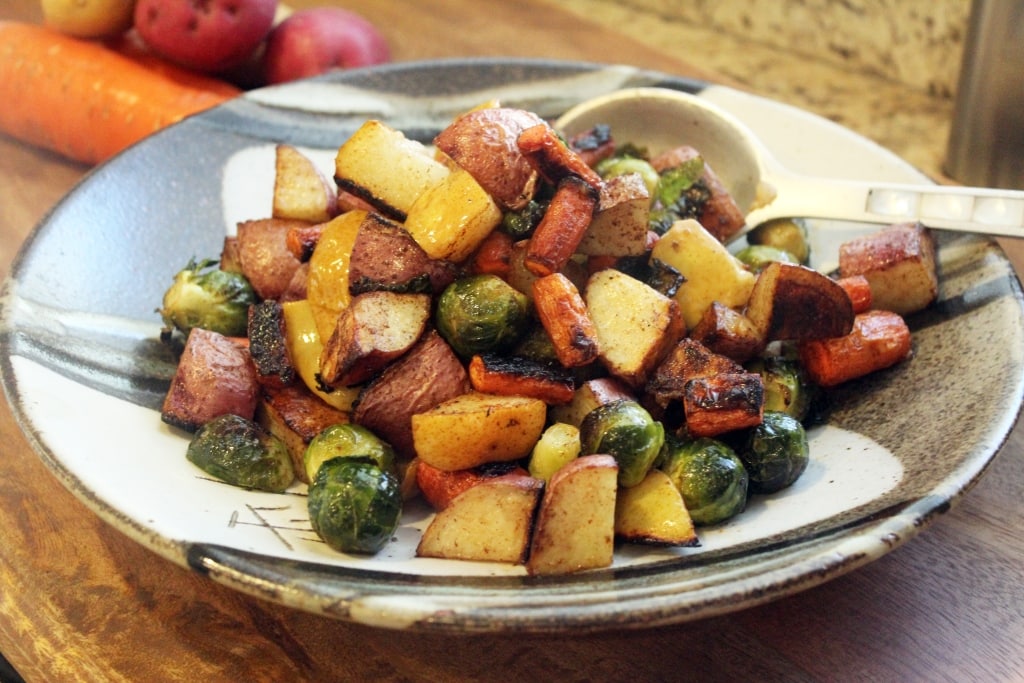 Enjoy these!  I'm thinking it'd be a really nice addition to a Thanksgiving table, but it's also a great side dish for any night of the week, and you can mix up what veggies you roast!  The combination here is a great balance of sweet and bitter, but eggplant, zucchini, butternut squash....they'd all be great in a dish like this.

Enjoy these, and let's keep obsessing over fall flavors for a bit longer. There's no shame in it. 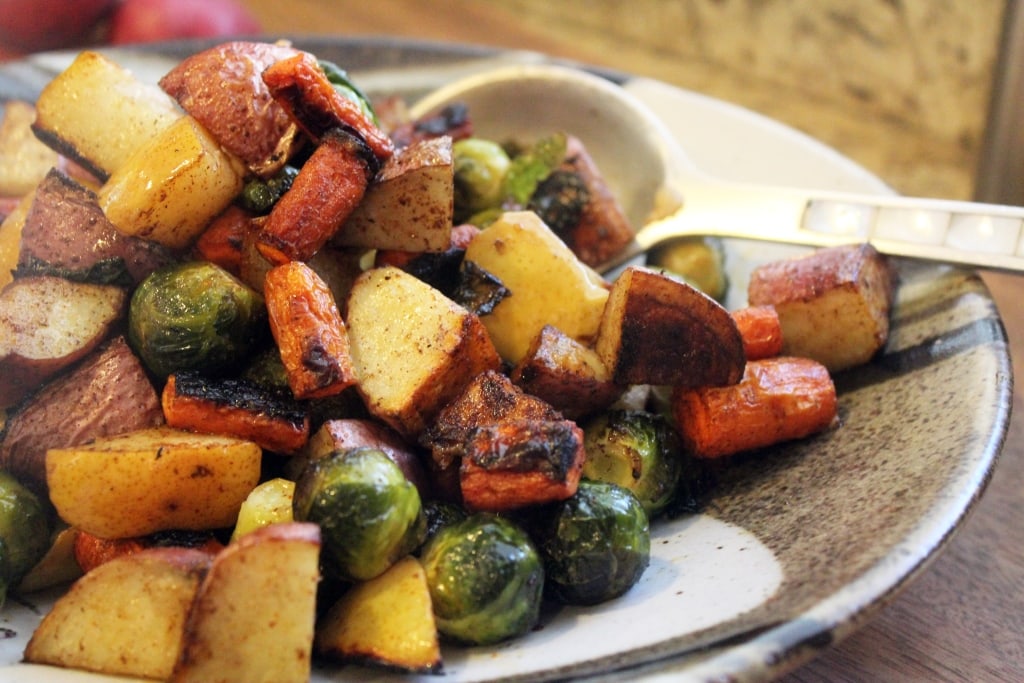 Shared at Weekend Potluck.  Check out all the other great recipes!