So, when I was little my grandparents lived in Charlotte, NC, about 90 miles away from here.  They owned what felt like a massive amount of land, and grew food.  Lots of food. 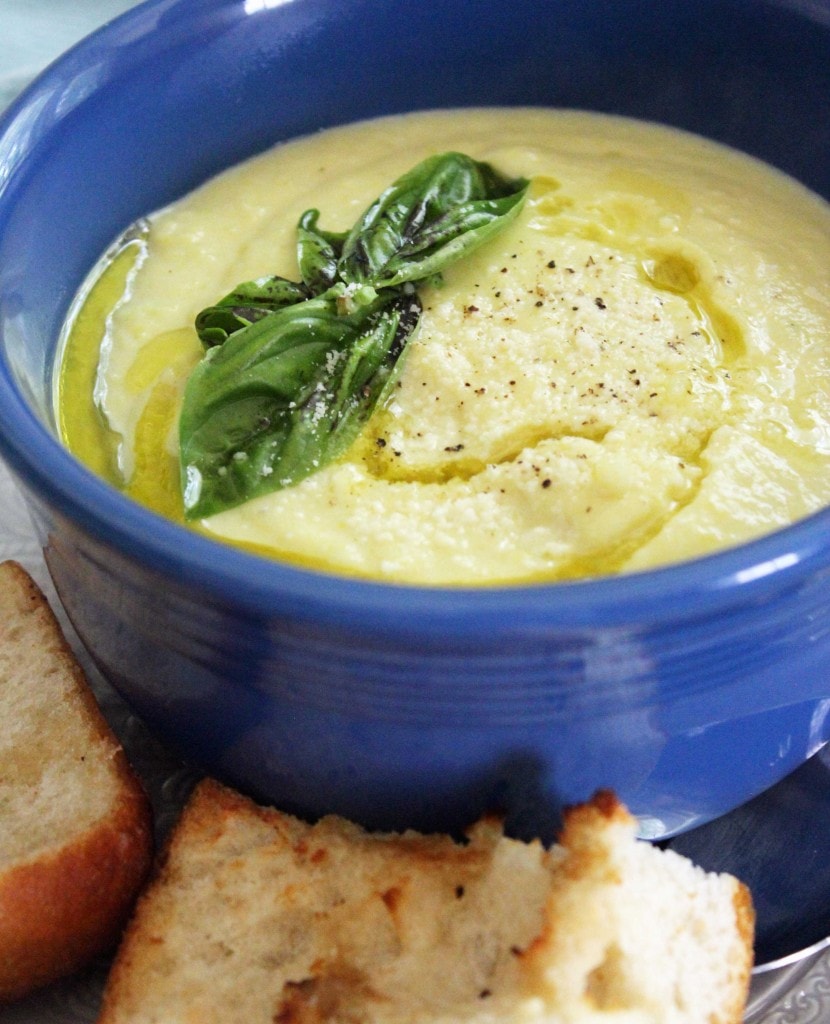 I don't think you could call their place a farm, really, but there were orchards - peaches and apples, and fields - corn, cantaloupe, cucumbers, blueberries, and probably tons of other produce that I don't have any memory of.  My grandfather worked in sales during the day and in the yard at night and on weekends.  The man grew shit, and was good at it.

Fast forward 20 years, they've now moved two more times for Grandaddy's job and landed at a retirement home (he's over 70 and I think has only been officially retired for a few months) in the mountains a few hours away from here.  It's a golf course community with big lots, but nothing like the Charlotte house.  However, the owner of the land hasn't changed a bit, so every year my grandparents grow more and more food even though there are only two of them.

So.  They bring it to us.  By the actual trash bag (happened last year with mustard greens, took my mom and I 4 hours to wash and braise them all).  We get tons of food from them every year, and because Jay and I are only two people also, we have to come up with creative ways to cook or process the food quickly so that it doesn't go to waste.

Hence, soup!  Squash soup is wonderful this time of year, as is any kind of soup, really, when you have tons of one kind of veg.  Cook, add spices, puree, boom.  Meals for days that will keep longer than raw produce.

For this soup, you need squash - any kind you like, but yellow squash, zucchini, or this flat pattypan squash work beautifully.  Basically we're looking for a pretty high water content so that the soup will cook way down and be light enough for summer.  Then you need butter, onion, celery, garlic, heavy cream, salt + pepper, parmesan, and chicken or vegetable broth.  The broth choice is totally up to you and just depends on whether or not you want the soup to be vegetarian or not. 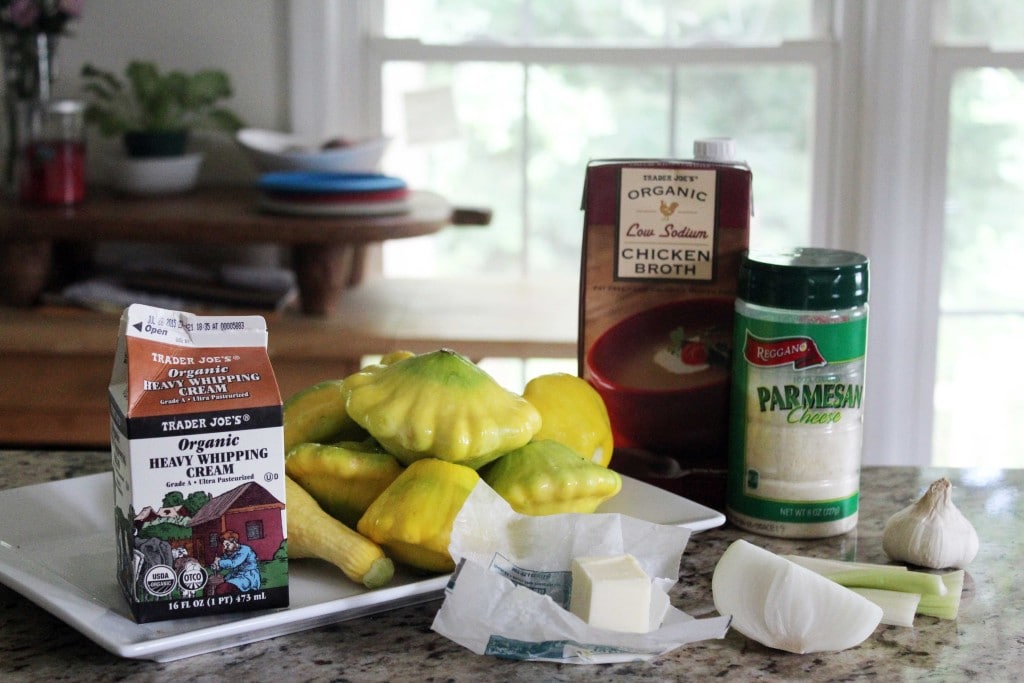 We'll start the garlic to roast first, then we'll work on the rest of the soup.  If you have a favorite method for roasting garlic, use it!  Otherwise, place an entire head of garlic in a small dish and drizzle it with olive oil, then roast it at 450F for 20-30 minutes until the garlic is very soft and the edges are brown.  Then, remove it from the oven to cool. 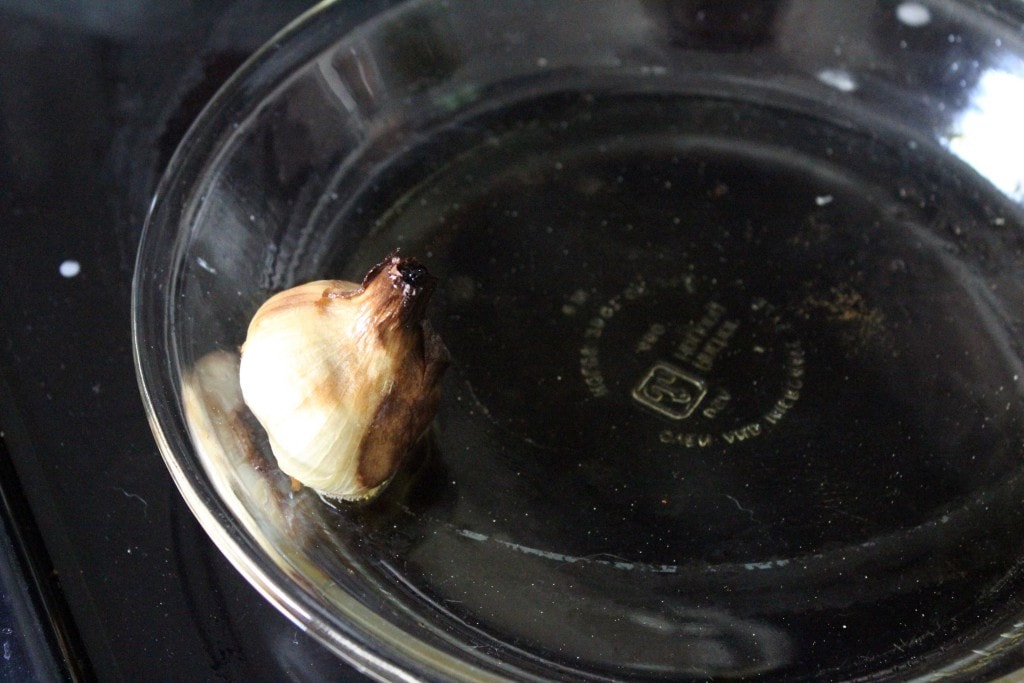 While that's happening, chop the veggies for the soup. Nothing has to be perfect since the soup will end up blended, just chop things quickly. 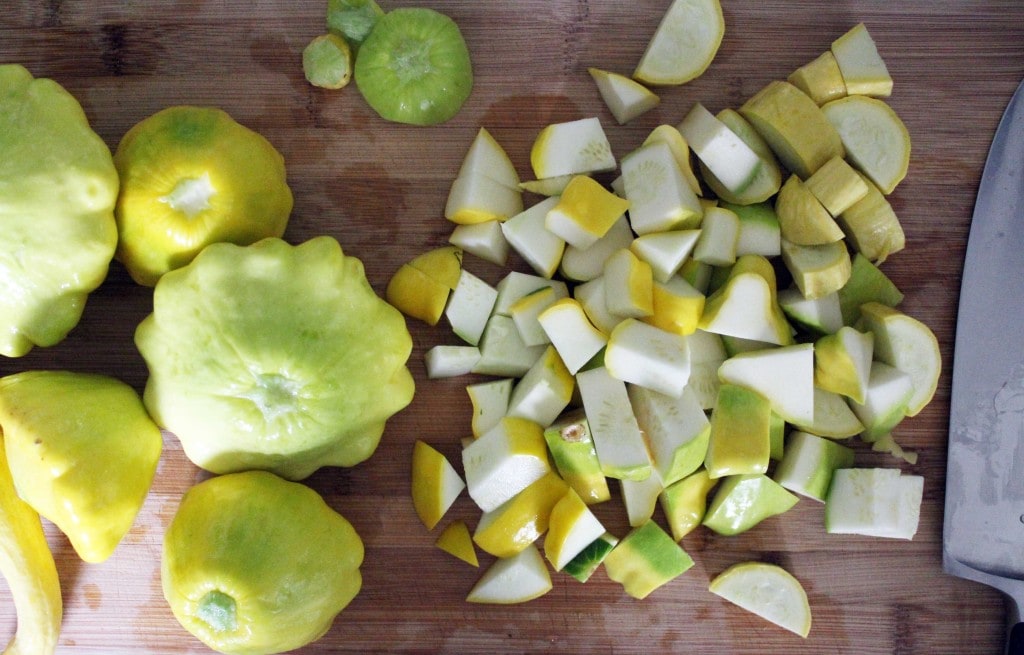 Then, in a large soup pot, add the onion and the celery over medium heat. 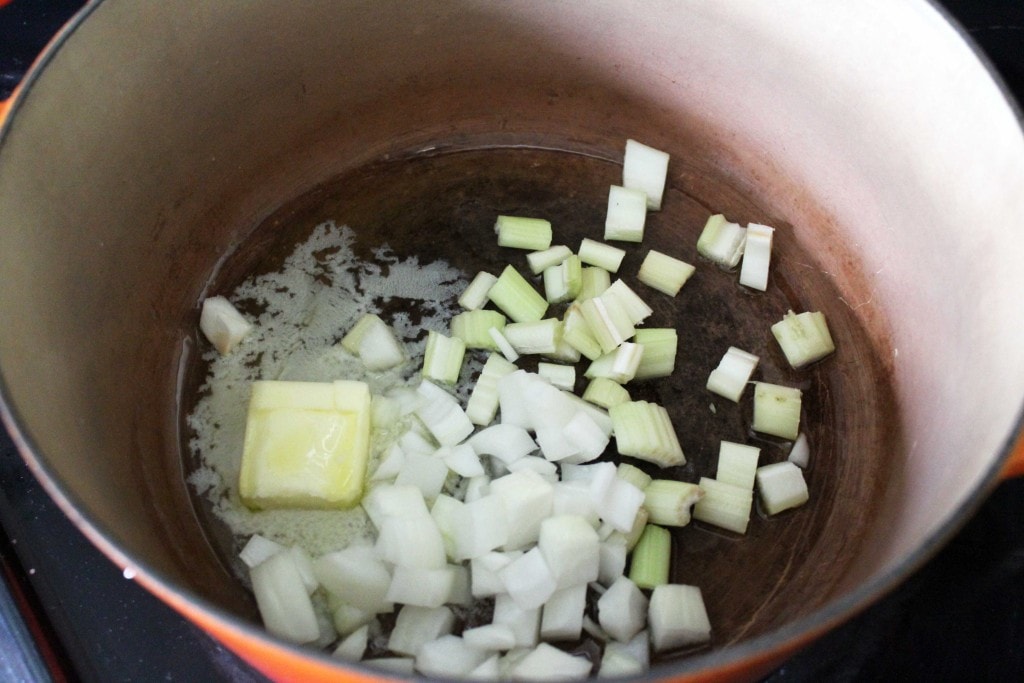 Let the veggies cook for 5 minutes or so until they soften just a bit, then add all of the squash. 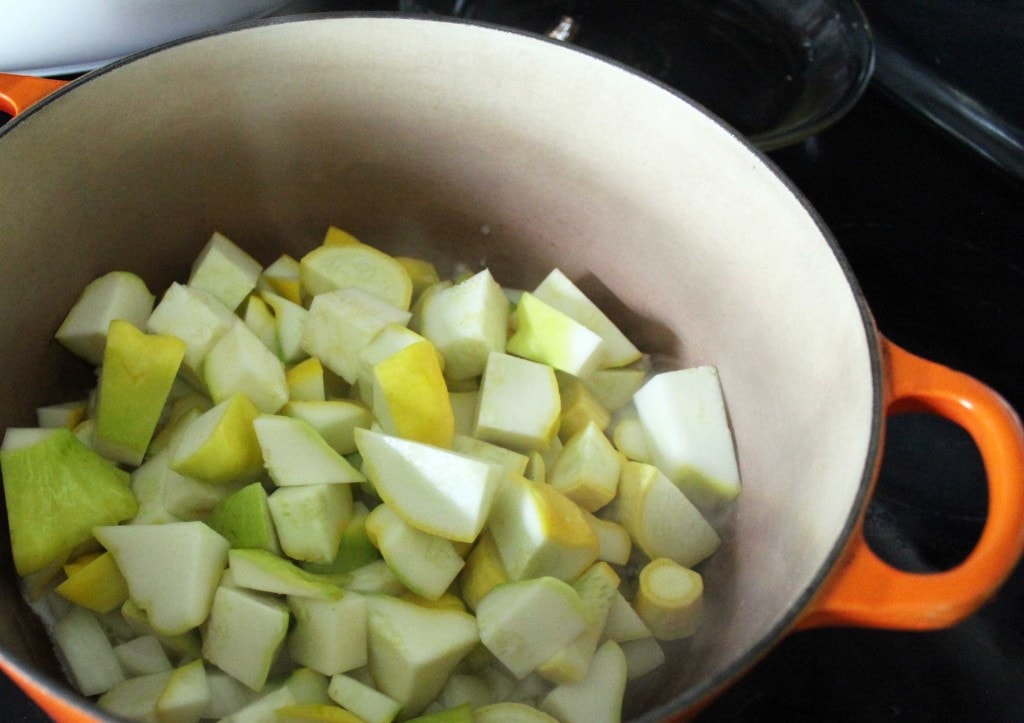 It looks like a lot, but squash is filled with water and will cook down a lot!  To make the soup, well, soupy, add some stock to the pot.  There are measurements below, but we want stock to come up⅓ to ½ the way up the squash. 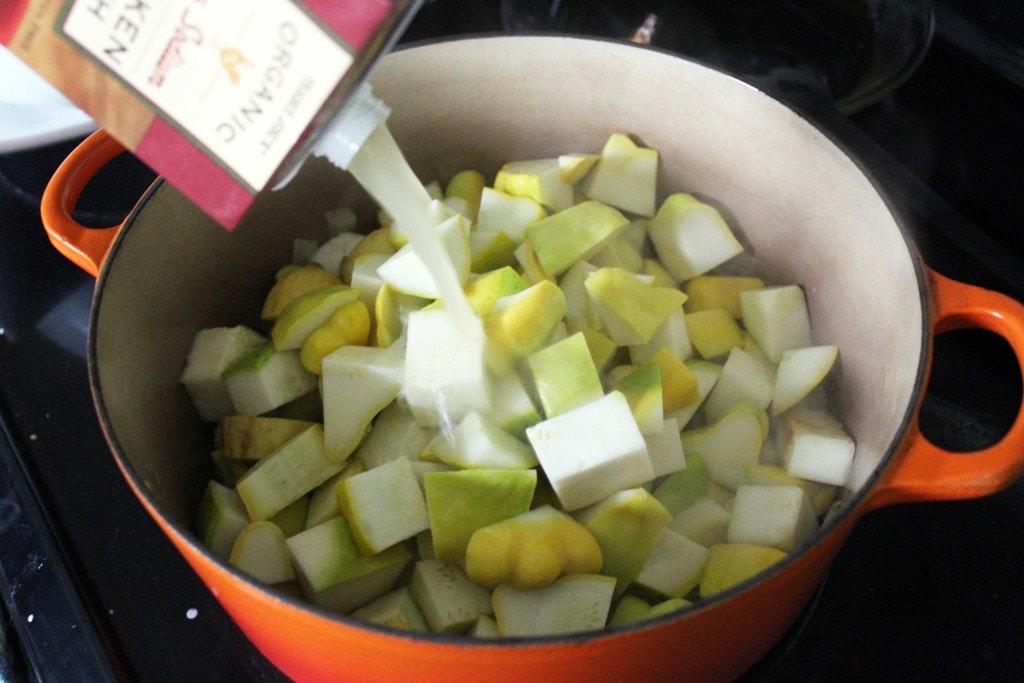 Give everything a stir and increase the heat to medium-high to bring the stock to a boil, then reduce the heat so that the soup can bubble gently.  Now, we just let the soup cook uncovered for 15-20 minutes until the squash has cooked way down and is very soft. 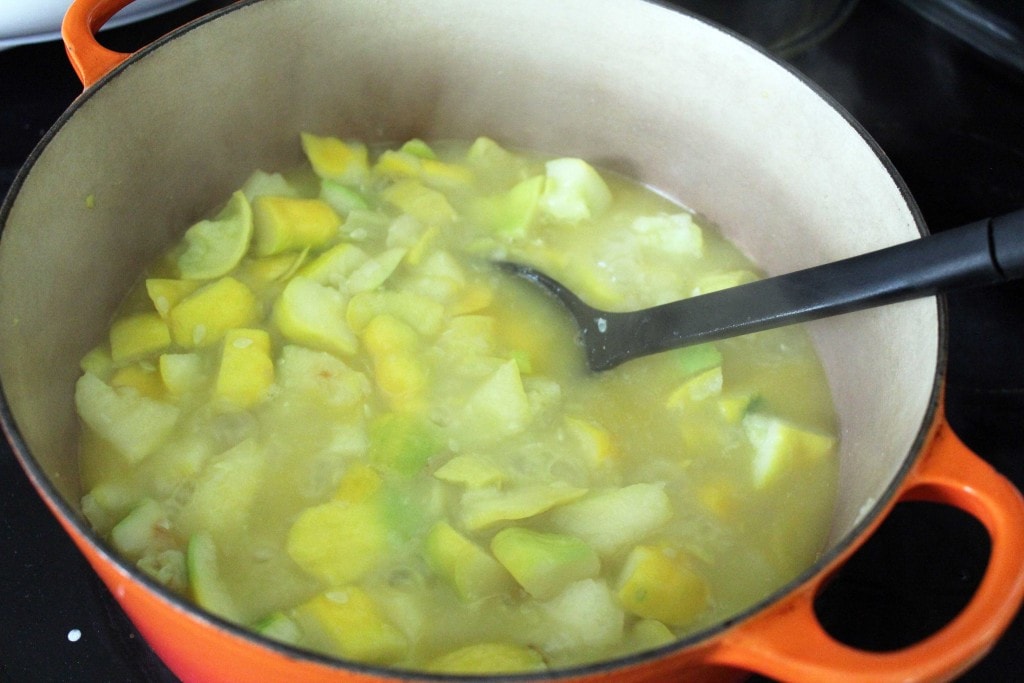 While that is happening, cut the head of garlic in half and squish the cloves right into the bubbly squash mixture. 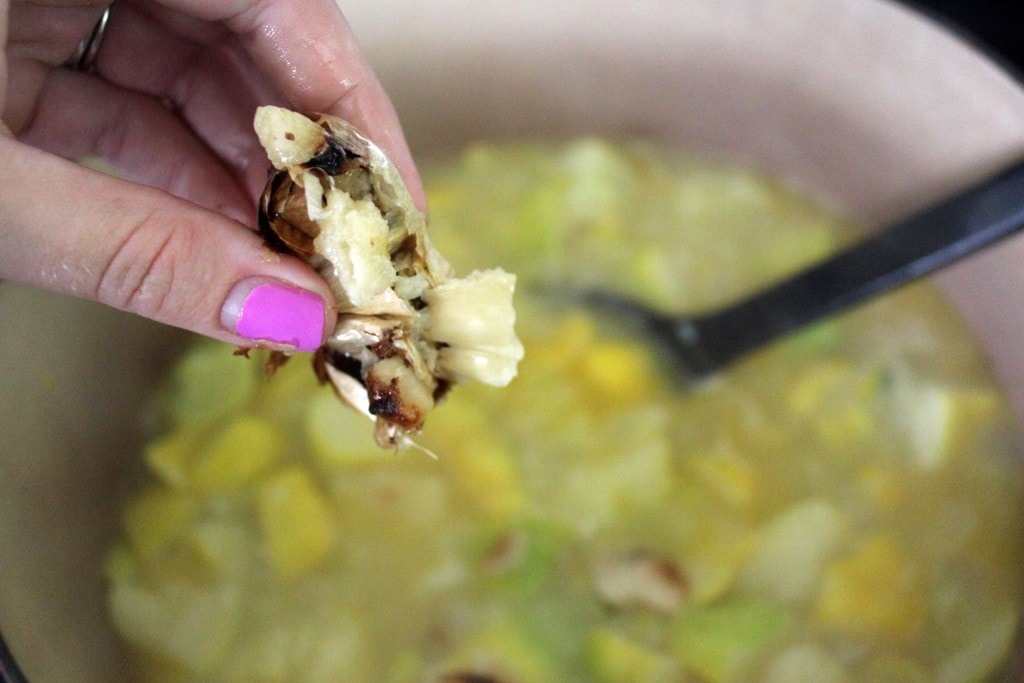 Now, when the squash is super mushy and the liquid has cooked out some, use a blender, food processor, or immersion blender to puree the soup until it's really smooth. 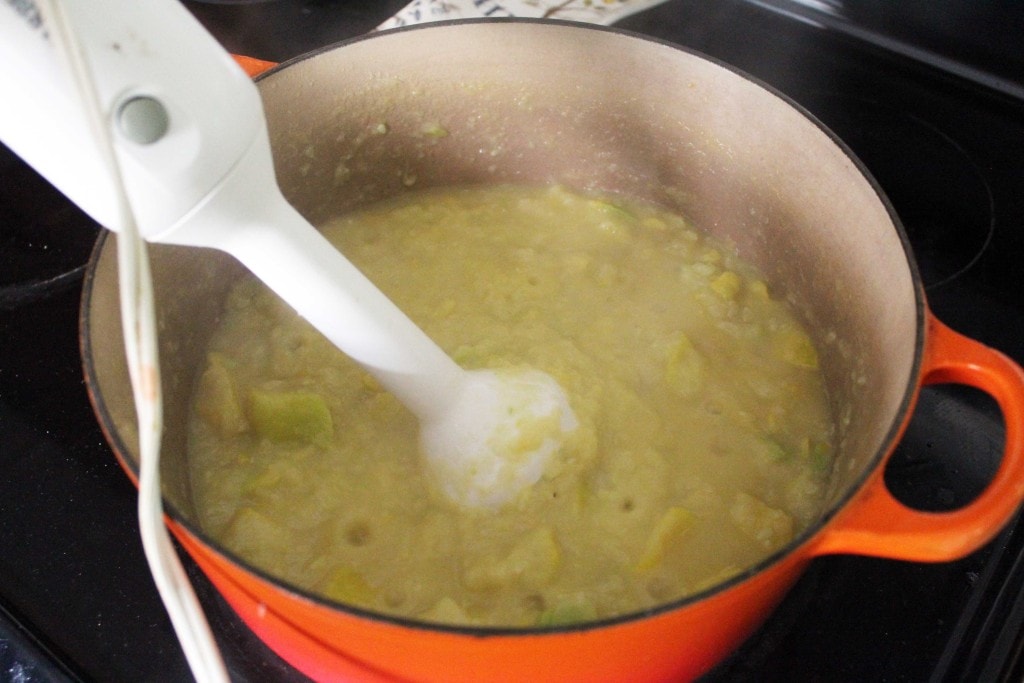 Turn the heat down to low, and add the cream, parmesan, and a little butter to the soup.  Stir that in, then taste the soup and add as much salt and pepper as you'd like. The soup should be creamy and smooth - add stock if you'd like to thin it out or let it reduce on the stove for a few more minutes if it needs to be thicker. 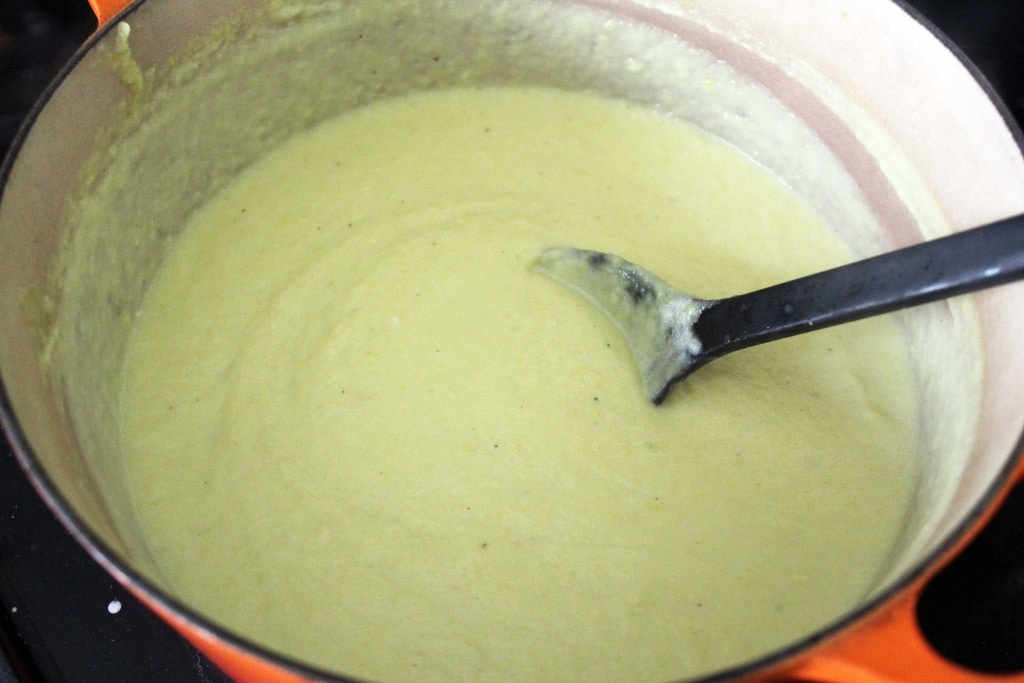 To serve, I do crusty bread, olive oil, basil, and extra parm.  Play around with toppings and Have It Your Way (in a healthier way), and get AT this. It's a great week-opener, especially if you make a big batch like this that can carry you through the week. 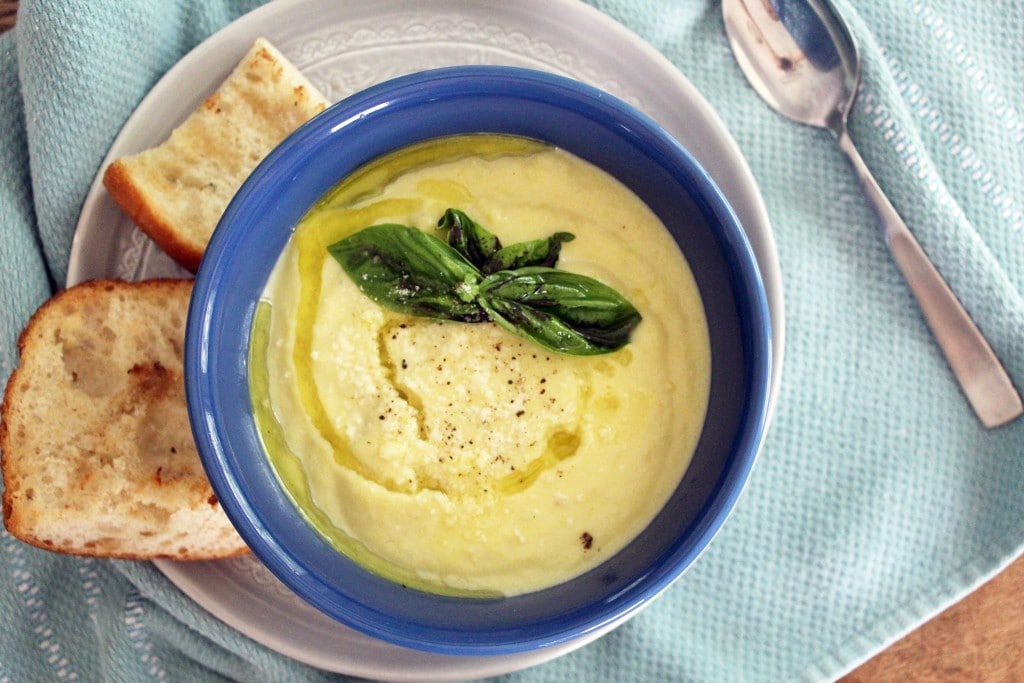 Oh, and.  Pretty much any veggie pureed with roasted garlic can be turned into a soup this way.  Promise.  The end. 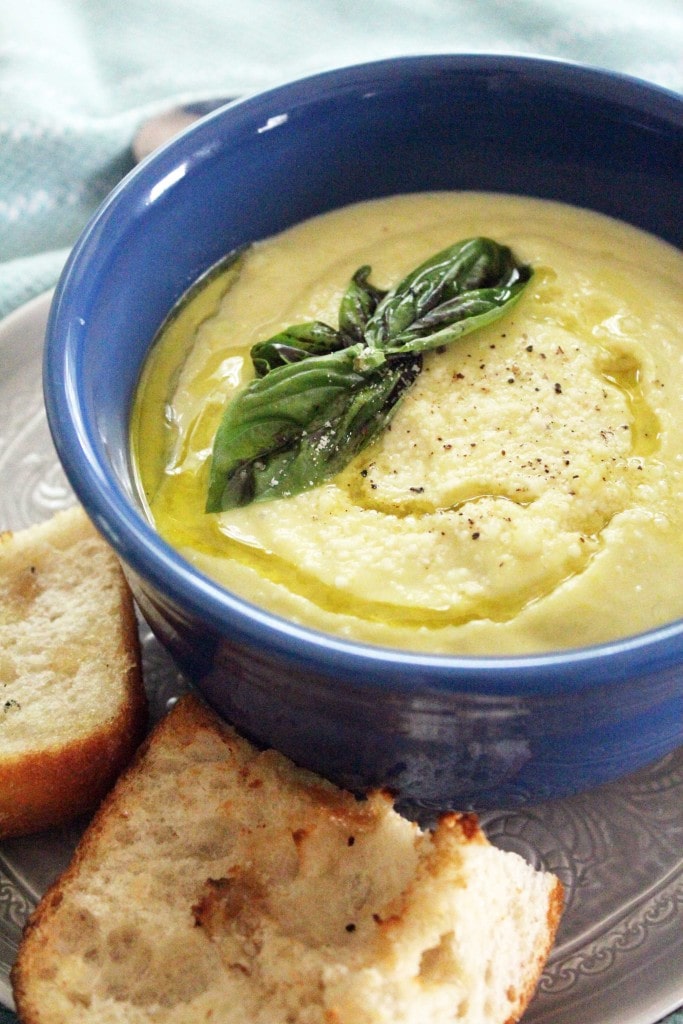