We have arrived at the total downhill mark of things.  After 30 weeks it felt kind of like an uphill battle to get to 35 without being so terribly all the time impatient, but NOW.  Now we can say that, if full-term ends up being a thing, we will have our baby in 2 to 7 weeks (I'll be induced on day 1 of week 42 if homegirl doesn't make an appearance before then).  A 5 week window of health is wide for those of us who like to plan, but so be it.  Two more weeks, and then we just...wait.  Do normal things, work, practice car seat stuff, have Thanksgiving, and wait. 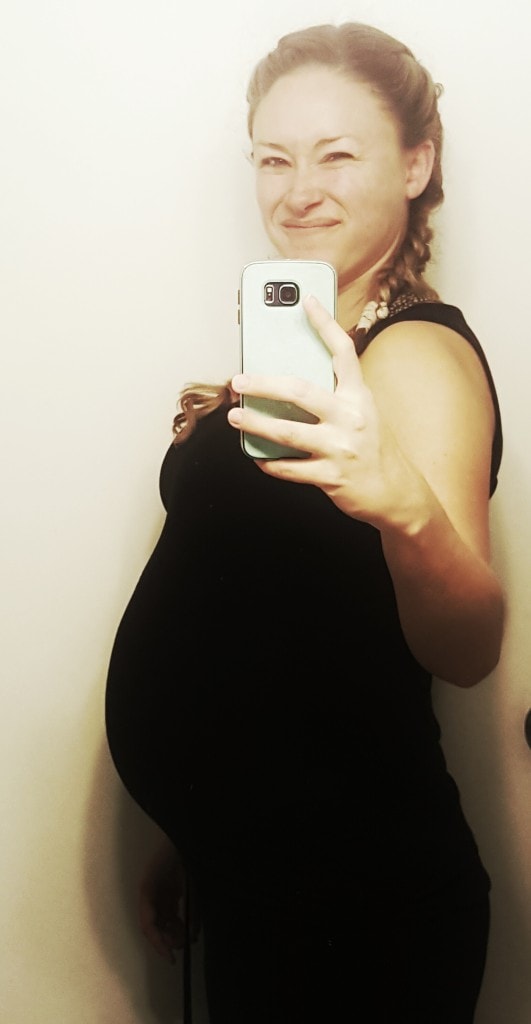 Physically, I'm gradually slowing down.  I've gotten progressively achier and more tired, and have had a glorious cold to make everything extra special in the meantime.  I'm down to 3 yoga classes a week, and in a few weeks I won't be teaching at all, which is so weird.  Yoga is more and more uncomfortable unless I'm doing prenatal yoga, so it's definitely time to let it go.  The belly is just...there, you know?  Folds or anything involving legs near shoulders just don't work the way they used to, but I'm proud of the fact that I made it this long teaching a pretty rigorous schedule.

The pain I'm in comes almost exclusively from my ligaments under my belly, which just get TIRED after too much walking or standing.  I've also started to have some awful sciatic pain in my right hip that gets to me after too many hours of sitting down.  If I stand for too long my ligaments hurt, if I sit for too long my right hip bone feels like it's going to snap in half.  That particular pain is the absolute worst, take-your-breath-away kind of thing.  I can avoid it if I make sure to get up and down throughout the day, but once I've been sitting for too long and it sets in there is no fixing it until I either can be nearly totally reclined on a couch or in bed, which is super not cool when it hits about 2 hours before work is over and then I have to drive home.  Driving with that pain is my least favorite thing so far about pregnancy.
2-7 weeks.  We can handle this.

The whole thing with only my RIGHT side hurting has been a trend since this girl was the size of a walnut.   She's just kind of rested there the entire time, growing up and into my lungs, which gives me these aches right under my shoulder blade that just won't go away.  Mainly I want to lie down all the time and am thinking about installing a TV on the ceiling.
Speaking of lying down, I have allegedly started snoring.  A lot.  And all night.  Bless Jay's heart, almost every morning between 3 and 5am he wakes up for good and goes to finish sleeping on the couch because I'm so loud.  I think I do kind of hear it because I feel most mornings like I slept super lightly all night - not really tossing and turning, but having near-aware dreams where it feels like I'm riiiiight on the surface of dreaming.  I haven't had any dreams about the baby or childbirth, which I consider a good thing because the anxiety is hard enough to keep at bay without it invading what little sleep I do get.  I never bought a pregnancy pillow, which I'm sure would be great but I just can't fathom buying yet. another. thing, especially something that I've only started to see a use for in the last week or two.

For most of the second and third trimesters (so far), I've had a good amount of acne compared to my regular skin, but that seems to be fading ever so slightly these last few weeks.  It's not gone by any stretch of the imagination, so I think it could also be the weather changing.  What's interesting is that I don't use any acne medication because "you aren't supposed to," while I've done nearly every single other thing "you aren't supposed to" do during pregnancy.  Go figure.  So now that it's cold I have some dry flaky patches because I'm old and some acne because I'm pregnant.  Niiiice.

According to the midwives, the baby is pointing DOWN, which means her head is on my bladder and her arms and toes are toward my spine and ribs.  Totally uncomfortable, but is a good thing given that we need her facing that direction for the exodus, whenever she decides to make THAT move.  Other normal late-pregnancy things are happening, but mainly it's just the bulkiness of it all.  If I lean over to put on shoes I have to squat with my knees out to either side, if (ha, IF) I shave my legs I get all out of breath and pukey feeling because reaching all the way down to my ankles is hard with no room in my torso, that kind of thing.  I've actually had very little swelling, which is nice but of course could pick up at any time - every once in awhile I'll get a little puffy in my hands in the morning after I eat, and that's only in the car with the heat on.  Night swelling is barely noticeable, and if that could keep up that would be greeeeeeat.

Weekends have become pretty baby-centric; we have had one shower so far and have another one this weekend, and we try to do one or two little things on the nursery each week.  Jay assembled the crib (a hand-me-down), our glider came in (the only thing we've purchased so far), we made a mobile, and have started to organize the clothes and toys that we've been given by other people.  Looking at baby must-have lists and our registries it feels like we still need a ton of stuff, but we also HAVE a lot of stuff.  We've been super duper lucky with hand-me-downs from friends and family with a few strollers, 2 high chairs, a car seat, a "good" swing - stuff that would really add up had we not gotten it for free.   A big void area in our baby-purchasing is breastfeeding supplies and bottles.  I get a pump covered by insurance that is supposedly on its way, but beyond that I'm kind of waiting to see if we can try a few kind of bottles we got as samples before we go out and buy a bunch of stuff for that.  If the girls work properly she'll breastfeed for the first little bit, and then we'll transition to occasional bottles after about a month to get her used to boob and bottle before I go back to work.  I'm giving myself plenty of time for that transition in case she's brand-loyal or a general brat; homegirl's going to daycare and her options will be bottle or starve.  Hopefully she has my appetite and it won't be a massive issue.

In TMI news, all bodily systems on my end feel like a rocketship readying for takeoff.  I've successfully squeezed colostrum out of both of my breasts out of curiosity, which felt weird and also I had to google "how many holes are in a human nipple" because I had it in my head that human nipples and plastic bottle nipples are the same.  They aren't, btw.  I don't have heartburn but I burp and hiccup a lot, and food always feels like it's riiiiiiight there, which it is.  Part of the hormonal loosening process is that connective tissue and sphincters loosen to prep the pelvis for birth.  BUT, that stuff isn't, like, area-specific, so the sphincter that keeps food DOWN loosens which means it can come UP and cause heartburn and other weird stuff.  Relatedly, not all of my sphincters are loosening as described above because constipation is still a pretty real factor in my life.  I've had people say that they find they have looser poops as pregnancy ends, but I am NOT there yet.  Being constipated is never terribly fun, but with all that extra pressure from the massive uterus it's REALLY not fun.  I'll be SURE to tell you if I start having less trouble with this and more diarrhea in the near future.  Aren't you psyched?

While we're on the topic.  Let's talk about my perineum.  Or all of them, generally.  Alllll through pregnancy you read about the little muscular spot between vagina and anus, and how it needs tender loving care but even with that will almost certainly be the spot that tears, if you have a tear, during childbirth.  Well.  I'm not going to lie, before being pregnant I never gave the area much thought. Some people are all about it being super sensitive and sexy and that's great, I just missed the boat.  But NOW.  When I sit down to go to the bathroom all the pressure from my uterus and the baby have nowhere to bear down but on The Spot, and I'm acutely aware of it.  It doesn't hurt, but there's definite pressure in this spot that isn't a hole, just in between, and it makes me sad because I know it WILL hurt.  And maybe break.  And I think it's ok to be sad about that.

Speaking of, I was talking to a friend about the bebe the other day and due dates and she was all "is your vagina getting nervous?" and it was just the funniest way to phrase such a thing, and yes, I think my vagina and perineum are a little bit nervous about the whole debacle.

We're still talking about names a little bit, but our list hasn't really varied from right after we found out we were having a girl.  Jay votes for Tallulah and has a hard time talking about anything else, and I fully hate the name but have no real favorites, just a few that I like a lot.  I actually like James for a first name (Jay's real name) but celebrities are naming girls that right and left and I've had two people already say to me "omg like Blake Lively!!"  No offense to Blake but NO, it's actually a family name.  So....I don't know.

I find myself with a few more moments of anxiety than I'm used to, but other than that I thiiiiink I'm pretty calm and kind of just wait-and-see about the whole thing, both birth and the actual having of the kid in my life forever and ever.  I have regular fears about things being terribly wrong with the baby once she's hear and a lifetime of medical issues, and I've had a few moments of omg we'll never be alone ever again, but I don't dwell on that to the best of my ability.  First, if child-rearing was THAT BAD then people wouldn't have more than one child, AND it's too late to send her back so....no point in stressing that life as we know it is over, and maybe that's a good thing anyway, right?

So here we go, final stretch!  Start talking to me about baby products again - what you love, what you hate, great deals, etc.  We have a LOT that we don't have yet, but I'm trying hard to focus on only necessities at the beginning and then asking for a few more "fun" items for Christmas, etc.  Plus, baby items are so much more fun than "will my body rip in half when she comes out" kinds of scenarios.