So, once we found out I was pregnant, things kicked into a ... higher ... gear.  Not necessarily high gear, because it's just all so weird at first, but things definitely shift once you get a certain answer on a pee-covered stick. 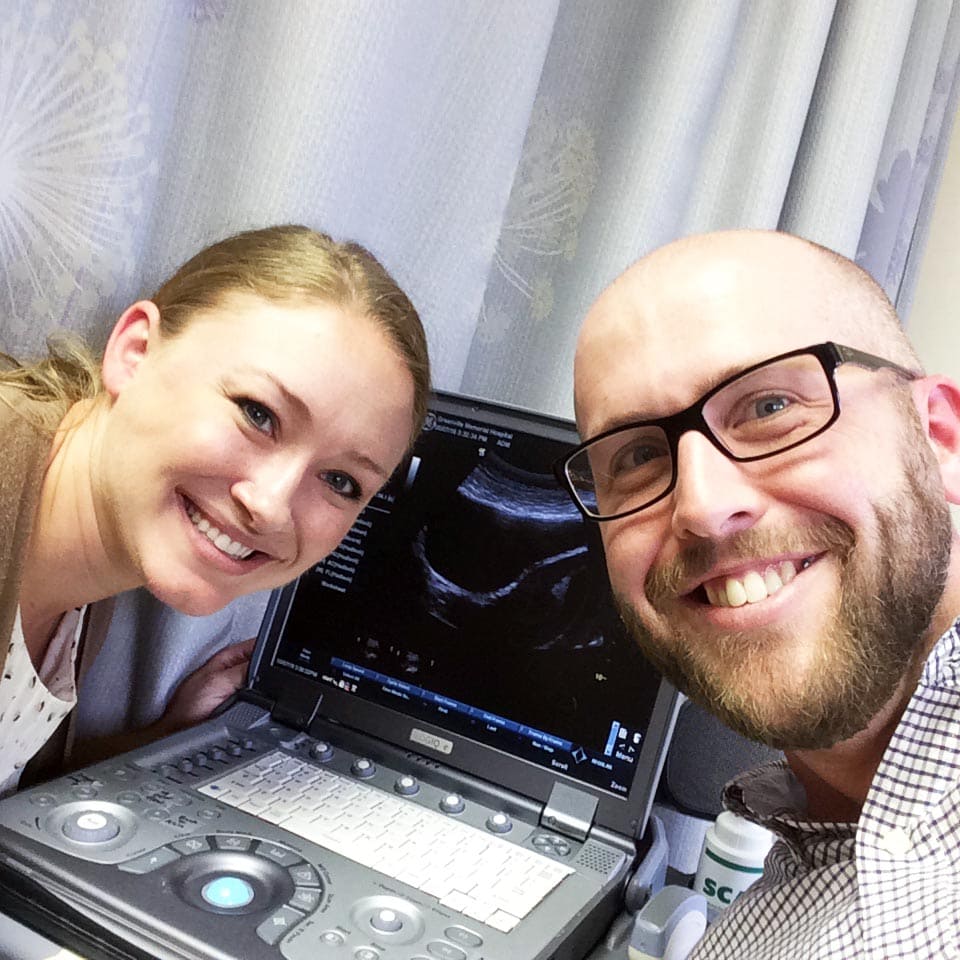 Physically, we were still exhausted from being in NYC for Finals and emotionally exhausted from the OHSHITBABY realization that we were both having.  There was only a momentary freak out, but it was still enough to set us back a little bit.

In response to all of that, my body responded with a violent sinus infection/cold, which I of course couldn't take anything but Afrin for (Afrin, if you're reading this, I'll be your spokesperson).  SO, I took 4 days that week off work and sat on the couch and thought about my life.  I had to go to Memphis for more a cappella work the very next weekend, so I figured I didn't want to be any sicker than I had to be for that trip, since we'd officially be in the hiding-a-baby phase of things.

I actually go back and forth on why we waited as long as we did to tell most people about Cranberry Hastings (my sister's original name for the kid, and I love it).  It's just a THING, because there is such a high rate of miscarriage in the first trimester, and for whatever reason parts of our culture just wait awhile to tell the earth they're expecting, so we did to.  Then, I read a few things about how we're contributing to the shame attached to miscarriage with this method, as if it would have been my fault if I'd lost the baby, which may or may not be true, but after reading a few things like that I don't have a hugely good reason for why we didn't tell most people earlier.  It was 14 weeks when the very last person found out, and I'm not sure if we'd do it the same or differently on another go around, should there be any more tries at this.

Jay, for his part, loved telling people and couldn't keep his damn mouth shut.  For someone who was really iffy about kids, he got on board QUICK, and was all about sharing how potent is sperm was.  I really think there's some kind of pride for men in being fertile, no matter if the thing was planned or not (ours was, but that isn't always the case).  He immediately told his boss, which turned out to be a good thing because he's been able to attend every single appointment so far, and saw his father just a few days after we found out and told him.  Jay actually told his father, mother, AND sisters without me just due to scheduling - I would have loved to have been there, but it just didn't work out with scheduling.

After I got back from Memphis I told my best friend Heather and my bff at the hospital, Mary. They both knew that we had been thinking on the baby lines of things and were lovely and happy for us, and it was GREAT to have at least a few people know.  We also told a few other close friends and my family, but other than that kept bebe under wraps, which I kind of loved.  It was WONDERFUL at work to still go about my day as if nothing was wrong and I was just a therapist living my life.  I loved the anonymity, and while I'm happy to talk about my belly now, there are certain people (mainly outside of work, my coworkers have been great), that can ONLY talk about the baby.  It's like every single other thing in my life is just GONE and my sole purpose is gestating this prune.  Now, I appreciate people that are excited for us, but I also really appreciate people who see me as a complete person rather than just an incubator.

Telling my family was probably the most fun thing so far.  We had dinner with my parents about some cars we were buying from them (or so they thought), and I was all "Daddy, I know it's an older car, but how safe do you think it is, for, like, a car seat?  Because I'm having a baby."  I've never seen the man's face go through so many emotions in one second, it was the BEST.  Screaming, hugging, questions, all that.  Then a few weeks later my sisters all were in town at the same time so we had them over and my neighbor Belen, who is super crafty, had the great idea to decorate cookies with ants to get them to think of aunts...well, that would be great if I had the capability to decorate anything on anything.  I tried one, it looked like a rhino, and I went with just writing A-U-N-T-S on frosting.  Then, as predicted, one of my sisters said "are you pregnant yet?" and I was luckily able to say "grab that platter out of the oven!"  AND THEN my sister's girlfriend Katie looked at the platter all confused and said ... "Does that say Cunts?  Like you want us to stop asking?"  And I just died laughing.  This girl is the MOST prim and proper lady, and I'd have never imagined she even knew how to accurately use that word, but the fact that she immediately assumed that I'd use it to describe my sisters is just really one for the ages, and not terribly far off.  Once we got the message clear the sisters and sig others were excited for us as well (there was one boyfriend there who is relatively new to the fold and, Zac, I'm sorry for all the awkwardness you're experiencing, but you're learning...) and lots of squealing ensued. 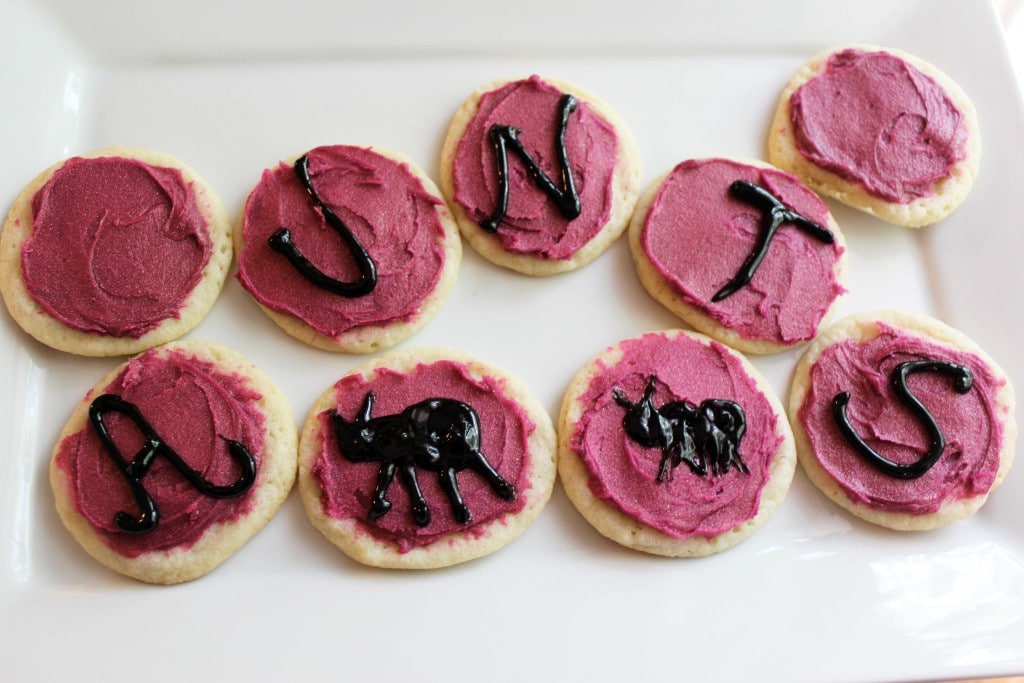 Physically, those first few weeks after NYC were kind of ridiculous.  I was cold/sinus sick and couldn't breathe, which is lovely on its own.  Then, my boobs were killing me and huge and my stomach started cramping like mad, which of course made me Google if that was normal about ten times a day.  Cramping, though, was only the tip of the Googling iceberg.  You know you've struck gold when you legitimately search "vaginal mucous during pregnancy."  I mean come on.  And, no, I do not mean a little extra discharge.  I mean BLOBS, which should really be on the packaging of...something...or more common knowledge for people who are pregnant for the first time.  Luckily, the internet assured me that weird vaginal things happening were normal, so I could calm down a teensy bit.  Don't have kids yet?  You're welcome for this.  See me on a regular basis?  Blobs.  You're welcome for that.  (as a note, my vagina having a cold only lasted for about five seconds and isn't a regular occurrence)

In terms of appetite, everything changed in those early weeks.  All the lovely complex flavors I love were replaced with nausea, a sweet tooth, and the desire to only eat plain foods like tacos and spaghetti.  So, that was interesting.  I hardly cooked, ate weird foods, and lost 5 pounds.   I never threw up, which I'm so thankful for, and my sense of smell was, and still is, something to write books about.  Jay hates it because every time he does anything bad I know about it.

Also in these first few weeks I started fast and furiously researching options for prenatal care.  Between OB's, midwives, doula's, hospitals, birth centers, and a thousand other options I was all kinds of confused, and I had to sort it out quickly.  My mom had used no drugs and midwives for all four of us, and I'm all indignant about how much it costs to push something out of your vagina as well as extremely distrusting of excessive interventions that are used too frequently, so I knew I wanted a similar setup.  But, different practices require different things, and there's always this tiny voice in my head saying "but what if your body sucks and everything goes wrong while you're trying to be a hero delivering with the dogs in your living room?"  LUCKILY, our hospital system has a midwifery practice with a birth center attached to it opening this very month.  I feel like it was a happy medium for us - I get practitioners that encourage natural birth to the extent that I want it but is in-network with the hospital and right across the street should anything go wrong during labor.  If things keep progressing nicely over the next few months I'll have a birth center birth and go home 6 hours later with no drugs and post-natal midwife visits at my mother effing house, which is awesome.

On weeks 8 and 9 we had a midwife appointment and an ultrasound, which revealed that Cran was a few millimeters smaller  than an 8 week baby, so they set me back to a 7 week baby.  When you're on week 8 of a 40 week journey that can seem kind of harsh, and the OB (who looked like Miss America c. 1983, hair and all) assured me that probably I wasn't ovulating on time and no big deal.  It worked out well, and that particular appointment (not with the midwives, you go to an OB office for ultrasounds) took 90 minutes for a 15 minute scan and read.  We were grateful we don't have to go there a lot.  We adored the midwives as soon as we met them, and they told me to do what I was doing, take my vitamins, and "be well."  And so that's just what I did.  I did all my regular yoga, rested a little more if I felt like it, drank the occasional glass of wine (never more than one at a time, never every day, but in accordance with research on very light drinking during pregnancy, we'll talk about it more later), ate sushi, avoided mercury a little bit, and kind of just did my thing, which appears to be working so far.

Then on week 12 we told you guys, Facebook, and everyone else in the world, and the advice started flowing in....which will be what we discuss next time.  Hint:  it starts with DO AB EXERCISES SO THAT YOU DON'T HAVE COMPLICATIONS!  DON'T DO AB EXERCISES OR YOUR BABY WILL BE TOO SMALL!

Pregnancy is confusing when you involve other people.

PS I'm keeping a running list of things that Jay has said about this whole process.  You're going to love it.