It feels less like parenting and more like "finally a bestie that has no choice but to hang out with me!" 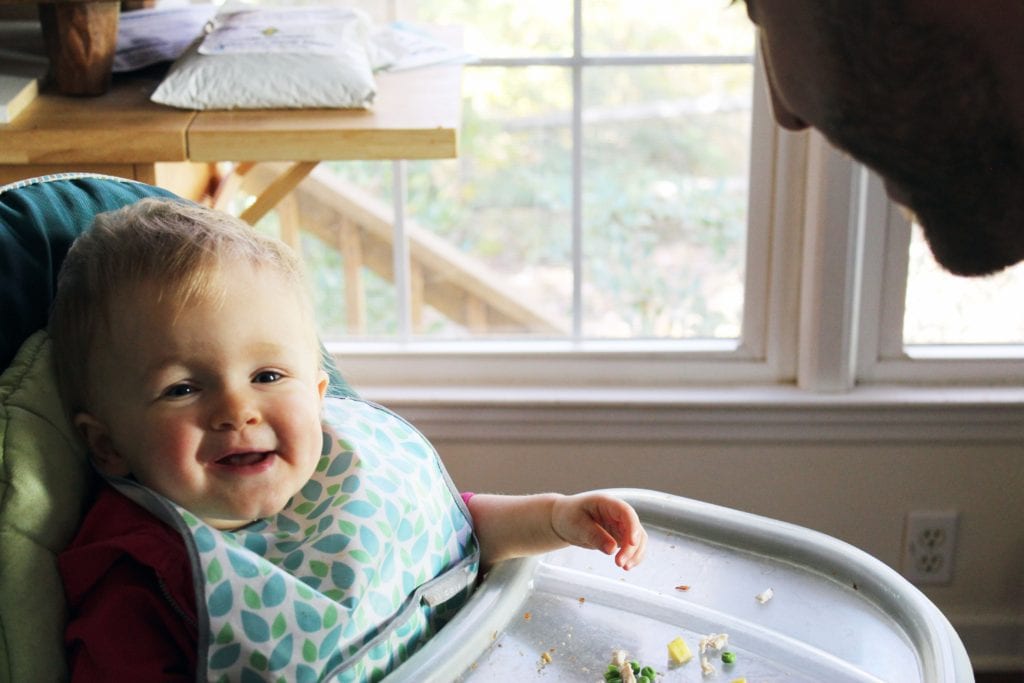 I have issues from middle school, is what I'm trying to say.

But!  Beck right now.  She is the funniest, most moody, sweetest, most opinionated, most curious little muffin that ever existed, I'm sure of it.  It feels like ages since I did one of the first-year About A Beck posts, and I will say that development slowed down a little bit for her, not in a bad way or anything, I just didn't have a ton to report other than I LOVE HER SO MUCH OMG.  Food intake and body growth aren't that big of a deal in the 2nd year to us, so recently it's been alllll about this little brain developing.

At Beck's one year appointment the MD told us that in the 12-15 month window (we go back to the ped at 15 months) we look for walking and talking, about 3 words.  Walking = no.  Words = way more than 3!  People who know us probably think we're insane, but Beck has different variations of "da" that FULLY count as different words.  Dog, Dad, Door - definitely different.  She has some harder words like shoe and squirrel that are SO cute to hear her try, and bread is probably her most discernible word because it's her favorite food, hands down.  If I only provided bread, milk, and clementines for the rest of her days I think this child would be satisfied.  Maybe she'll walk by 2, who knows.

We're still super lucky in the sleep area; 2 naps per day and 12 hours per night (I say as she whines into the monitor after only napping for 15 minutes).  I think she's close-ish to scooting herself to only one nap per day, but I'll take 2 for as long as she'll do it - she's delightful when she sleeps, and not delightful at all when she doesn't.  As Beck has learned about her imagination the bedtime routine has gotten a little bit more involved.  She sleeps with a teeny blanket, 2 babies, and a bunny, plus a paci.  She's old enough for all of this junk, so don't worry.  Putting her down is fine, but she sits bolt right up and arranges her menagerie, chats with them for a few minutes, then goes to sleep.  The waking up, though, is this whole process where we have to kiss each of the babies, the bunny, give them snuggles, THEN we are allowed to pick up our own child to move on with the day.  Huge eye rolls all around, because of course yes we could say no to this.  But why?  It's adorable.

Beck's other big development in the last few months has been being an ass.  She's super quick to holler or whine when she's not getting exactly what she wants right this instant, and we're kind of at a loss as to how to deal with it other than praising patients and ignoring the rest.  It's a little early for punishment or anything like that, but GLORY the howling if she doesn't get more of x in y amount of time gets OLD super quick.  The behavior is especially draining when it starts during breakfast.

Play for Days is Beck's motto, and she's usually perfectly content to play with herself, pull up on stuff, or slam her fingers in drawers (heh) to her heart's desire while I attempt chores or work or normalcy.  I love playing with her and making her laugh with funny faces and games, but I'm also grateful that she can chill by herself with some toys for a few minutes at a time.  Her favorite toys are the worst ones, the bright loud horrendous-song ones, of course.  I'm all "let's read this heartwarming book!" and she's all "but this plays snippets of songs that aren't real songs!"  So...that's what we do.

Even though she can't walk yet, this kid is mobile.  She crawls super fast and it's a wonder her knees aren't constantly bruised.  She kicks and squawks and flails in the car when she hears music, she wiggles her toes when she eats, flops herself on the ground to snuggle stuffed animals - it's comical in the best possible way.  I think the flip of the annoyance of having an opinionated child is that she's all in when it comes to the good stuff, too, so we'll take it.

As for us, we love love love every minute we have with Beck, of course.  Jay loves having time alone with her and makes extra effort to do so after work or on weekends so I can do my own thing or work.  She is fully obsessed with him, and they have I swear their own language and set of rules to exist by.  The silliness abounds with those two, and it's so fun to watch.  We are also loving taking Beck to new parks and fun places now that it's warm - we figured at some point restaurants wouldn't cut it for all of her adventures, much as we'd like them to.

I do find myself enjoy each stage more and more, especially as she's getting old enough to communicate with us on some level.  I spend a good part of the day guessing what's going on, but we get better and better at working together as we learn about her and she learns...English.  I talk to her all day about what we're doing it and why it's necessary, and sometimes it seems like she understands more than she lets on, which I take as a good sign.  It's also quite possibly an insane coping skill to keep me from wailing she'll never be able to do anything why does she hate meeeeeeee."  Either way, though, it serves a purpose.

Also she likes to put her hands in her poop.