This was a big decision, because I actually have TWO one-pot kinds of meals on deck for you.  Because dinner has to take 17.34 minutes to make or it's not happening, you know?  You know those nights.  Jay started his new job around the same time that my work picked way up, and, wouldn't you know it, Beck still wants to be entertained like, all the time.  THAT GIRL.  So quick dinners are the name of our game a lot of nights, because we still do like cooking at home most nights but also try to eat before 8pm, and sometimes this is the best we can do. 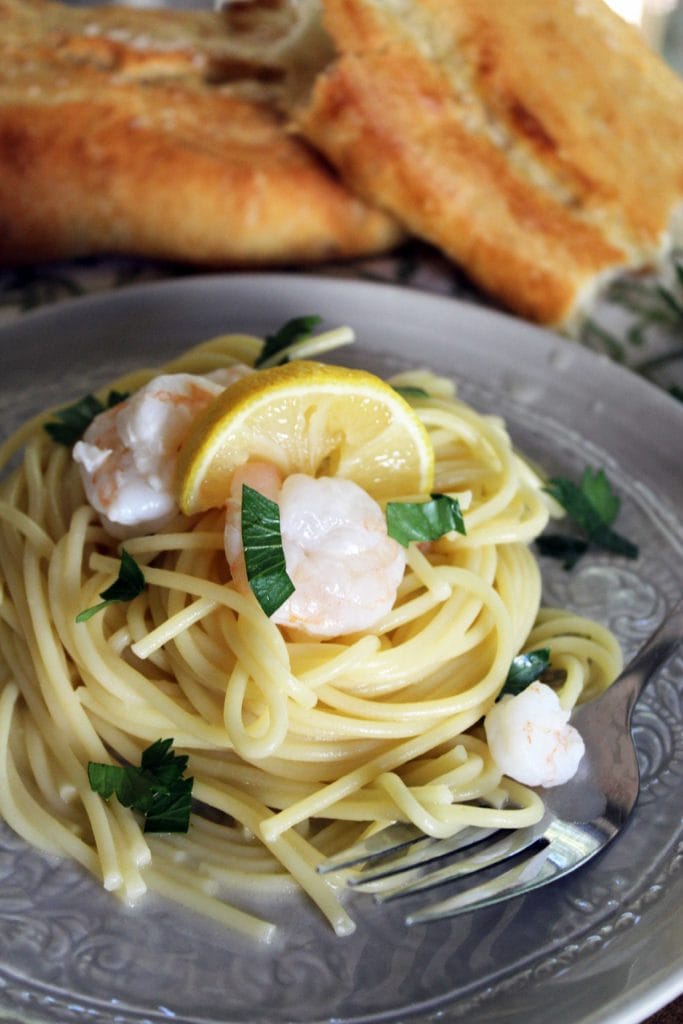 But, sometimes, like this time, quick dinners are legit delicious, so why not make them all the time, right?  This method of cooking pasta in its own sauce has been floating around the interwebz for a long time now, and I've never tried it.  I actually used to make a pretty similar shrimp scampi pasta back when Jay and I were dating and living in 600 square feet of cramped bliss, and have some ancient pictures of that recipe that were just not up to snuff for this fancy blog.  But a scampi pasta has been on my "make for blog" list for actual years, so when I decided to try the one-pot pasta method out it was a clear choice for flavors. 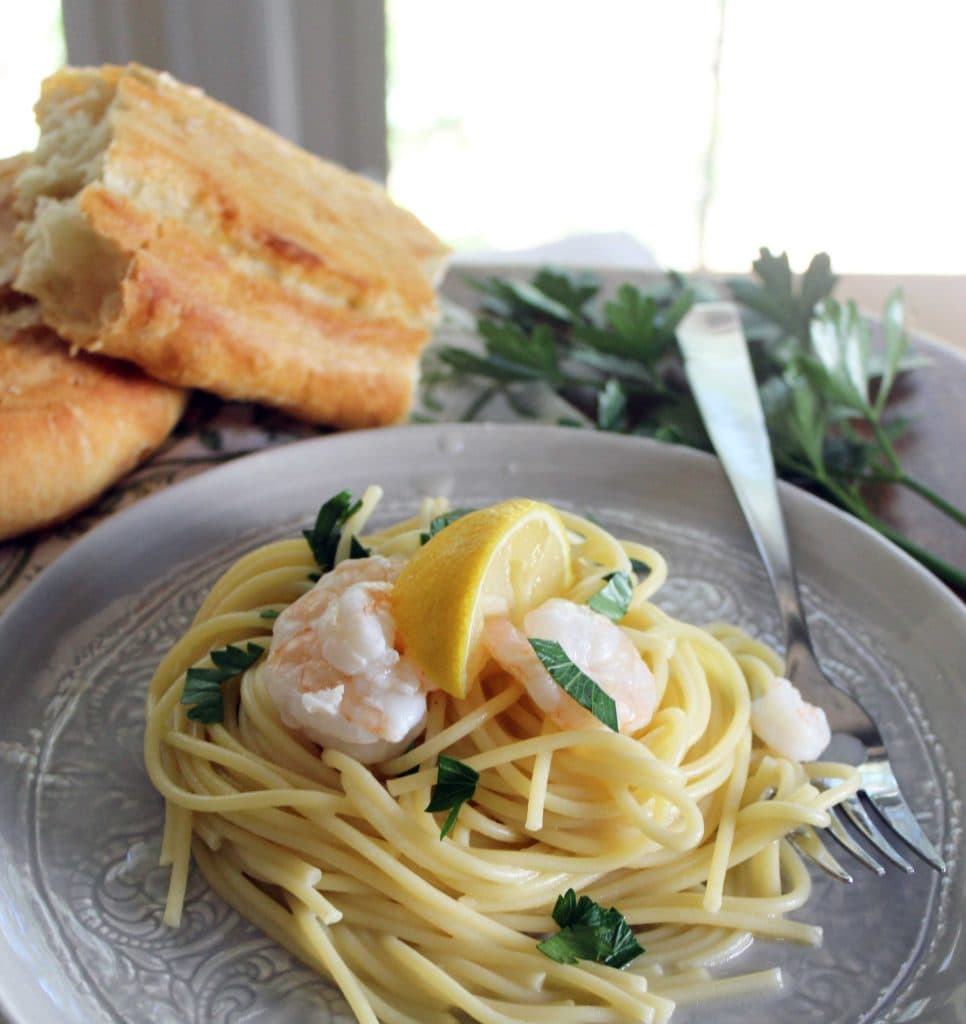 The deal is that you put everything you're using, including pasta and water, into a big skillet.  You cover that skillet to let everything come to a boil, then you take the lid OFF and let the pasta finish for about the same amount of time it would usually cook.  Since the pasta is uncovered the water evaporates and you're left with a super creamy starchy sauce, almost like pasta risotto, which sounds like the best thing in the entire world.  Let's do it.

You need spaghetti, raw shrimp, garlic, butter, lemon, chicken stock, and parsley.  What's that?  Yes, that is powdered chicken base mixed with water.  It takes up less space in my kitchen than boxes of stock, SORRY.  But you get the picture. 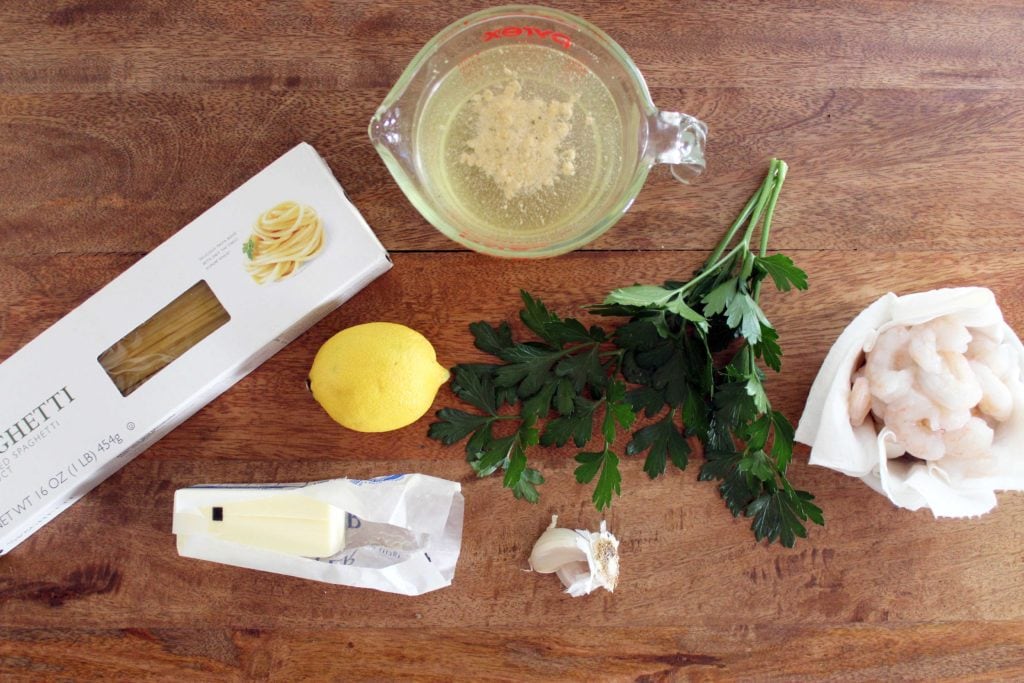 The only prep you'll do is to mince the garlic, cut the lemon in half, and chop the parsley.  Boom.  Then, add the pasta, stock + water (so it's not too salty but has good flavor), garlic, and half the butter to a big skillet. Mine was large enough to hold the pasta, but you can break the pasta to fit in your pan if needed. 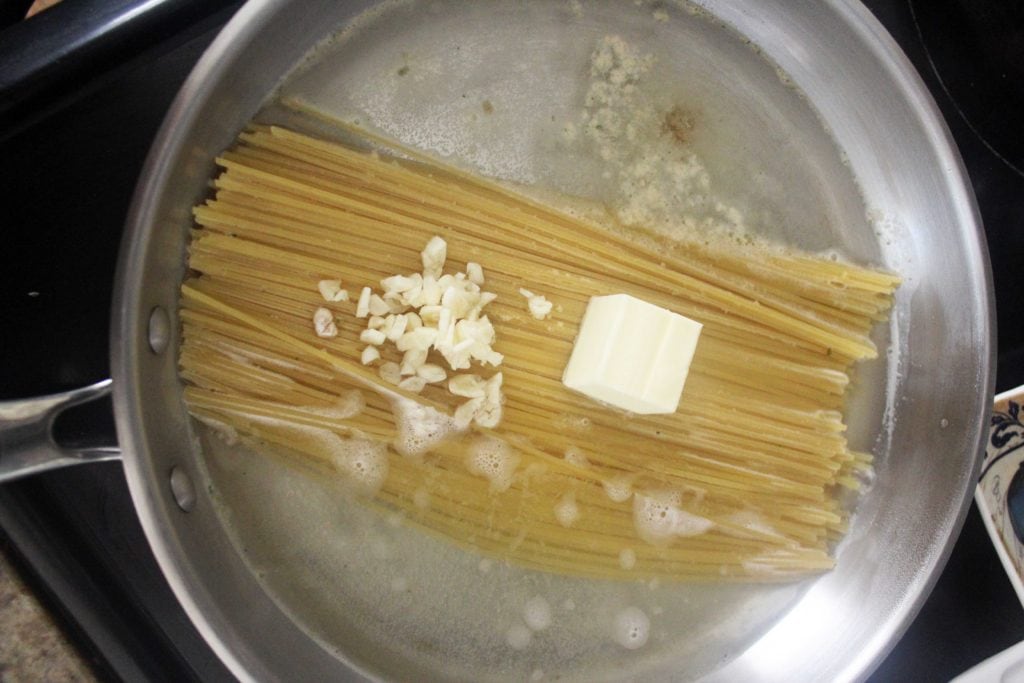 Now, cover the pan, turn the heat to high, and bring the water to a boil.  As soon as the liquid boils, remove the lid and toss the pasta every 2 minutes or so while it finishes cooking.  Like I said, the cook time for the pasta will be about the same time as listed on the box.  So, my pasta was a 10 minute cook, so after the liquid boiled I tossed and let the liquid reduce for 8 more minutes, and it was done.  Your pasta cook time might vary if you don't use spaghetti or have different instructions. 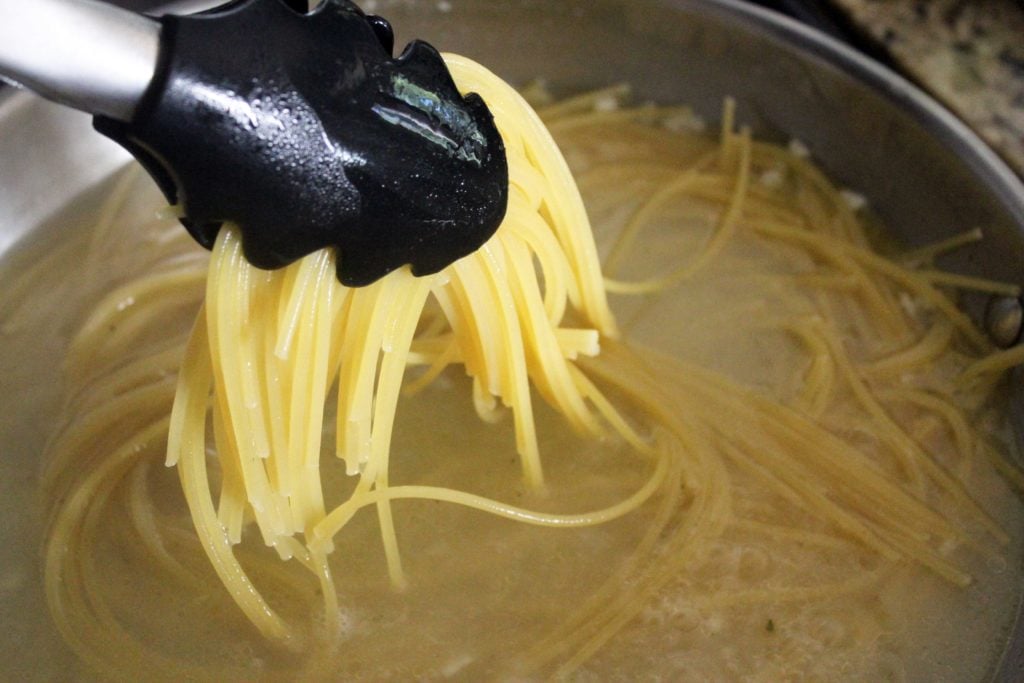 When the pasta is al dente and the liquid is mostly reduced (you'll have some sauce, don't let it all evaporate!), add the rest of the butter, the shrimp, and the juice of half the lemon to the skillet.  Sprinkle in some salt and pepper. 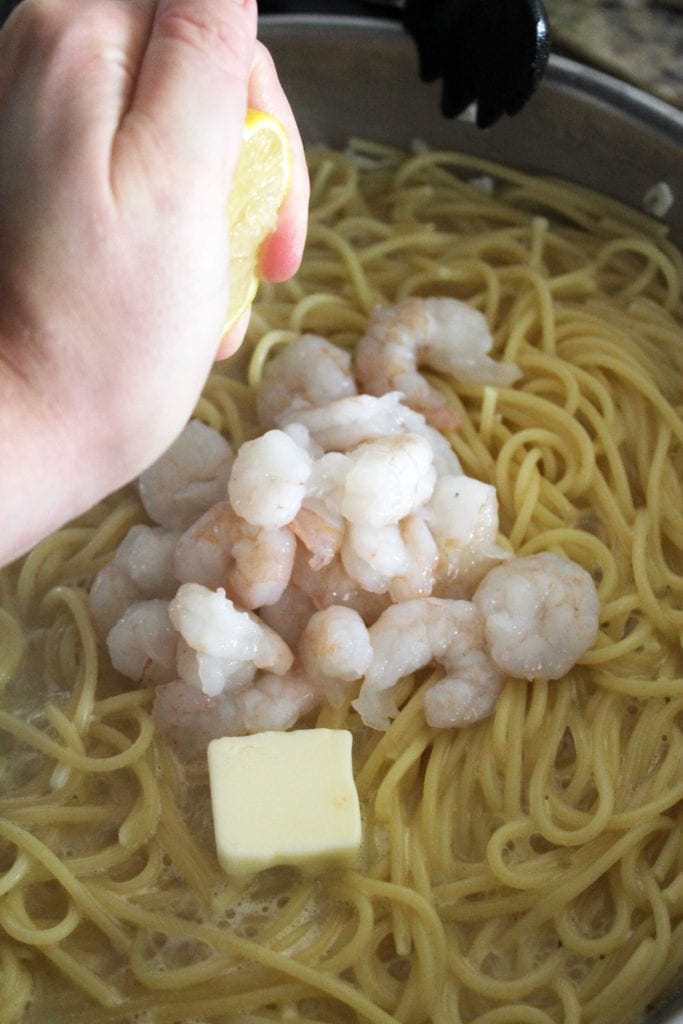 Now, toss again for 1 minute to cook the shrimp.  Taste the pasta and add more lemon, salt, or pepper depending on your preference.  Taste a noodle to be sure it's cooked to perfection, and add a little more water or stock if you'd like extra sauce in the pan. 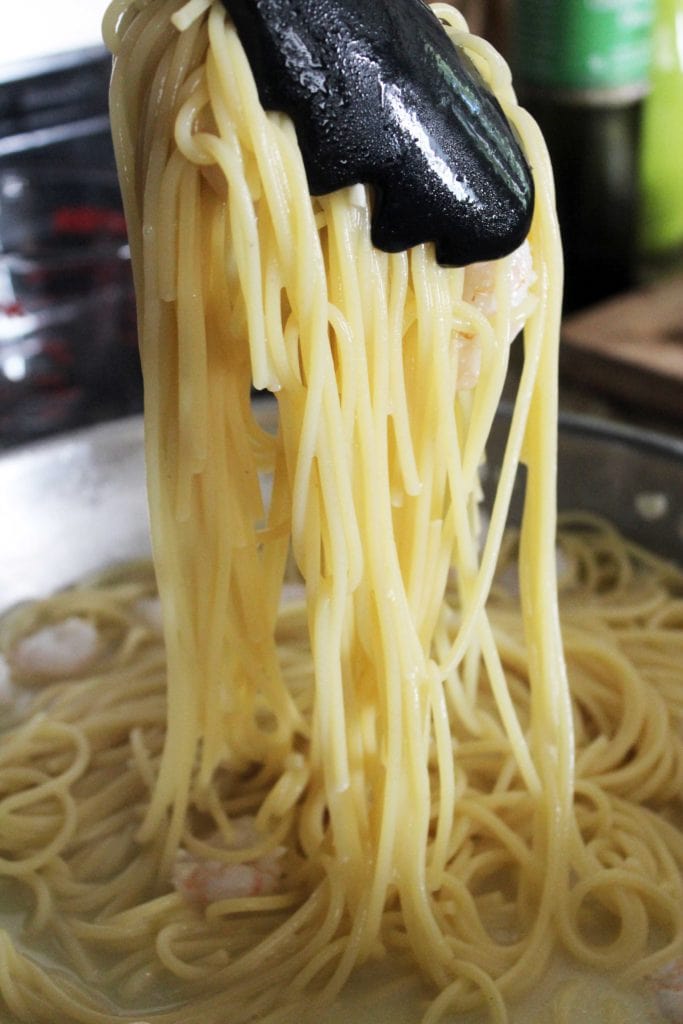 Done!  The shrimp cooks while the butter melts and the pasta finishes cooking, you sprinkle with parsley and eat your dang dinner. 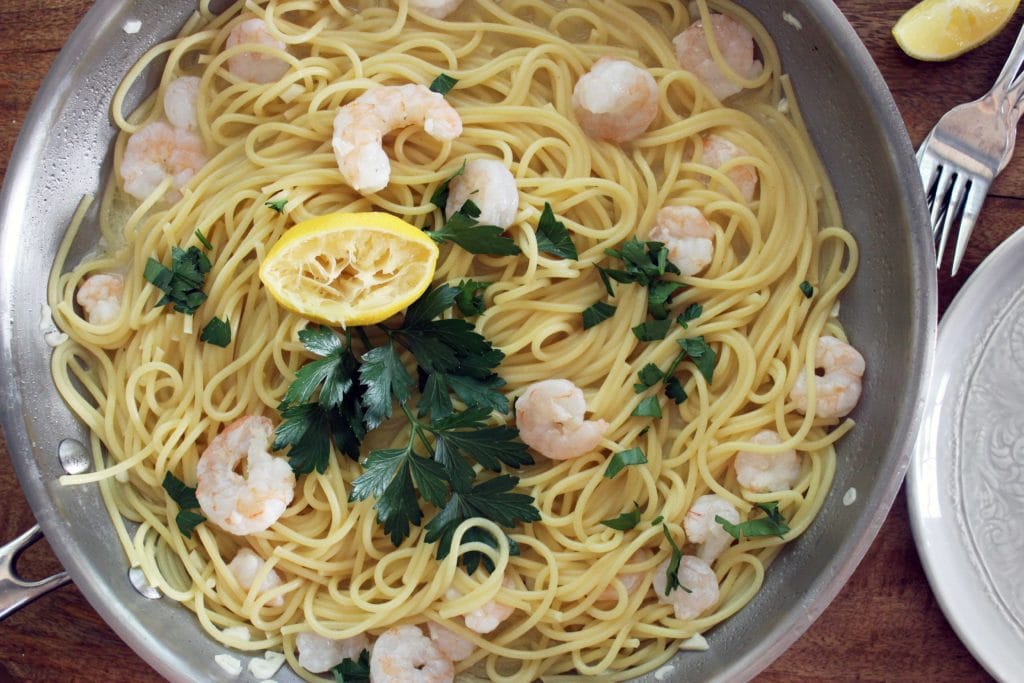 The simplicity here is killer, and I especially love that you can mix this up any way you'd like - stir in cooked chicken instead of shrimp, add green onions or extra herbs, the sky's totally the limit on this one.  Start here, though, because Tuesday dinners should always involve butter and lemon. 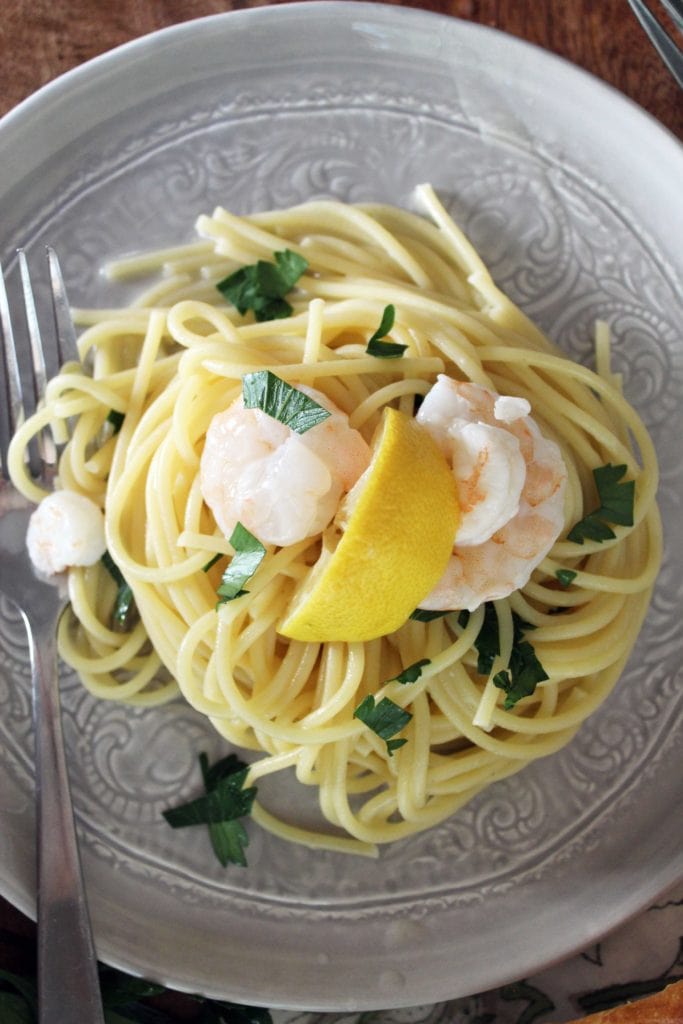 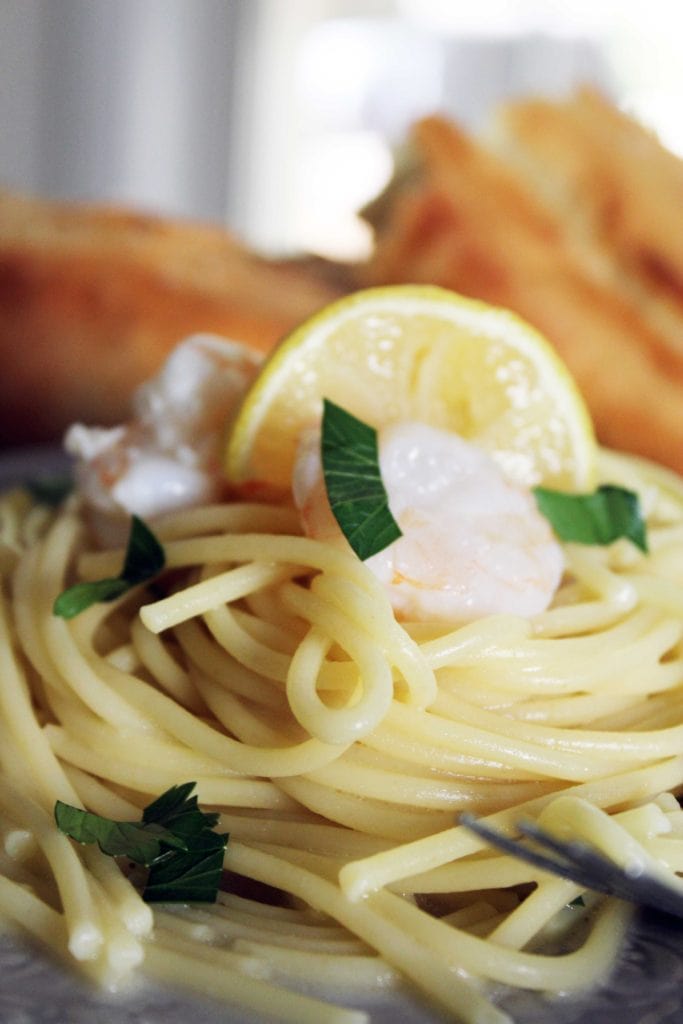