Home » pregnancy » On The End Of Birth Class {lindsay}

We have graduated from birth class and are, like, totally qualified to watch my body push a kid out of it. 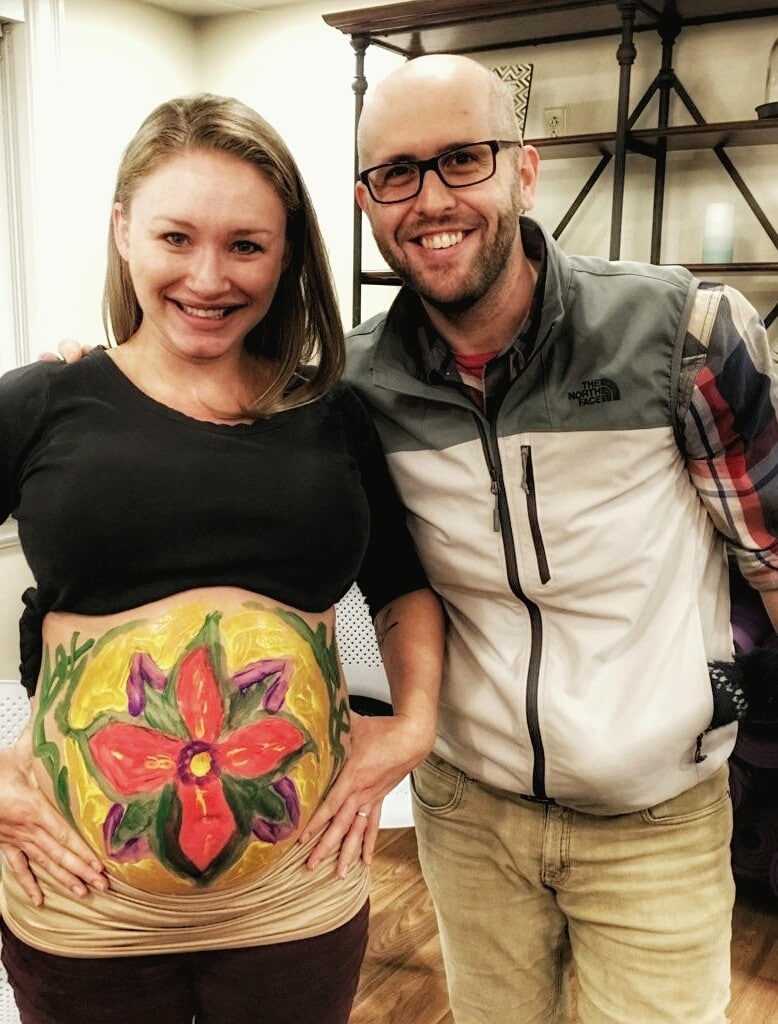 Which is kind of the main thing, besides Jay preparing lots of snacks. The midwives tell us at every appointment that we need to have lots of food for labor, and then other stuff says "you will vomit and not want to eat." So...snacks it is! Other than that we're supposed to let contractions happen and THAT sounds like a blast.

I'll be the first to admit that I was REALLY hesitant to take a birthing class at all, mainly due to my love affair with the internet. I have read a lot on my own about different birthing strategies for unmedicated births, and frankly didn't want to spend more money and more time doing another baby thing before the actual baby is here. BUT, it was required by the birthing center if we wanted to have a non-hospital birth, so we researched and picked Your Childbirth Journey. I only looked into one other person, and their website had a ton of religious stuff (do you want the biblical teachings of childbirth in your curriculum?) in the questionnaire and the woman ended every email with "Blessings," instead of "Sincerely." Now, look, we're in the South and people are all about Jesus down here, which is FINE, but I don't need Jesus to know how to avoid rectal tearing. Seriously. They just really don't go together in my mind, not to mention the fact that Jay and I are decidedly not religious. So we passed on Jesus for Gestation.

We DID choose Jen Hutchinson, a local social worker-turned birth junkie who does these birth classes, doula work, and probably a thousand other cool baby things in the community. As a bonus, we found out on the first night of class that she was the childhood bff of Jay's sister Catherine, but we didn't know that when we picked the class. I liked the idea of using someone with a similar career background to me AND someone who was up on current research and realistic about what birth can mean for different people.

The class was about a thousand times better than we were expecting. We loved it and were sad to see it end.

It's interesting, birth classes are the one thing that almost everyone who HAS done one says "omg you'll love it, it's so FUN!" and people who haven't just kind of shrug. Even people with grandkids have really fond memories of birth class, and I do think a lot of that is the bonding that occurs between the parents or partners taking the class with a common end goal - get baby out, do not die of anxiety in the process. That kind of birth, of course, can look a ton of different ways, but the end goal is the same for everyone.

There was of course a lot to learn, some refresher info or totally new stuff, but the takeaway from it all was that there's no way to know what to expect, so we had a lot of good talks about being really open to how things go and just letting things happen. We also heard a story about a woman who was in early labor at her home for 5 days (not dilated enough to be admitted to the hospital), so now I'm terrified that I'll be in labor for a week and not have the kid until 2016 or something. But fingers crossed that doesn't happen, because 2016 comes 17 days after my due date and no one will let me be pregnant THAT long.

It remains challenging for me to wrap my head around the hurry-up-and-wait aspect of Get Baby Out, and probably the biggest reason why I'm so glad we were made to take this class, and why we took this one. We heard stories about all kinds of births, medicated/non, home/birth center/hospital, emergency or planned c-section/induction, the whole thing. Jay will do wonderfully with that part, and I see one of his major roles in the process as being the one to remind me that 8,736 different options for how things go are NORMAL, which is important for anyone going through something that stressful.

The normalizing of the way I want to give birth (in a birth center, unmedicated, barring any unforseen complications) was important too. Something I've found about, well, every human ever, but A LOT with baby/parenting stuff is that once people have one experience they get really fixated on THIS IS HOW LIFE IS. Which makes sense because that's all that they know. I haven't had anyone be mean or anything like that, but I've had lots of eye rolls and "well, just be sure you are disappointed when things don't go as planned, and you aren't a failure if you ask for drugs." Well, thanks? After a certain point you DO start to doubt yourself, and so this forum of really empowering the birth goals each family had was important for me not to feel crazy about what I want to happen with the birth of our child (whether or not it happens that way). I think that combo: know what can happen and be open to change, but be really confident in what you WANT to happen is a really nice place for me to rest in the midst of all the unknown.

On the last night of class we painted our bellies for fun while we chatted about weird pregnancy stuff (One girl has had 10 ULTRASOUNDS, all for absolutely nothing. She's trying to switch doctors at 33 weeks and is fully pissed.) and got all excited. We're close a point where the "work" is done. Baby is growing, tests are done, pediatricians are picked, it's just kind of ... stagnant for a few more weeks, which is good in some ways and frustrating in others.  Calm before the storm, I suppose.

So now we just limbo and wait for contractions that aren't funny anymore, and see what we see, right? 7 more weeks until due date, 9 more weeks max, and only 4 more weeks until homegirl is cooked and no one will freak out if I go into labor. NONE of those are large numbers of weeks, guys.

If you're in Greenville and know anyone pregnant, I can't recommend Jen enough for her realistic, funny, informed approach to birth, and her support of any avenue you're interested in learning more about. She does classes and doula work and I'm trying to figure out a way to just hire her to be my best friend.