Warm flavors.  I think that's my thing this season.  There are so many great fall standbys, pomegranate, pumpkin spice, chai, etc that are so lovely this time of year, but the warmth of it all is really what gets me.  That's here, but with a little mid-east flair. 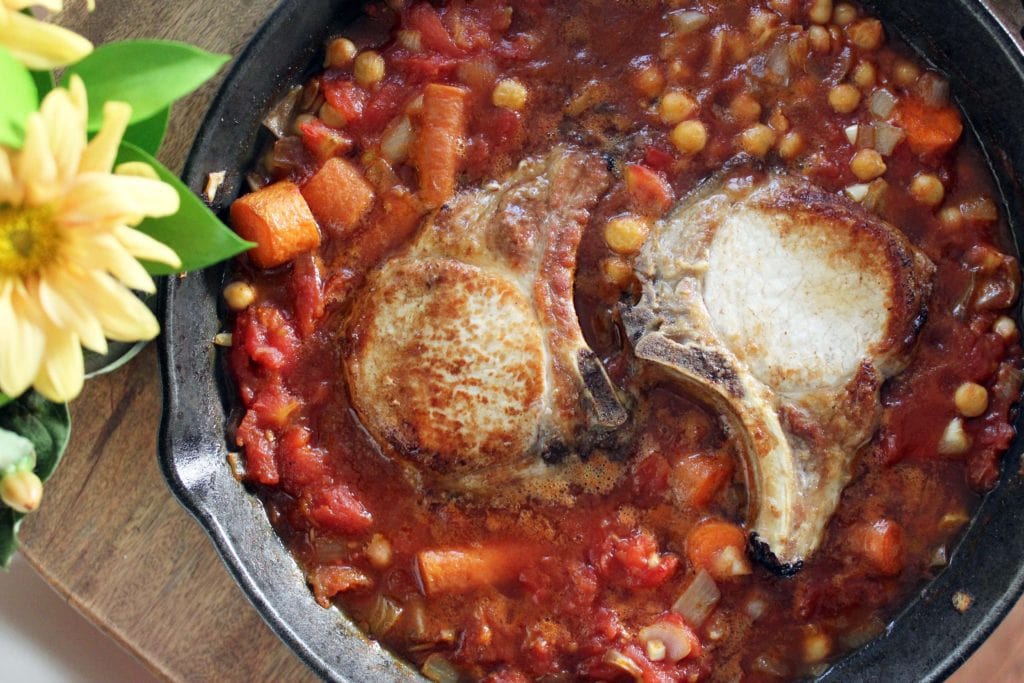 When we were growing up in France there was this couscous dish that was topped with a tomato/chick pea mixture and flavored with North African spices.  Cinnamon, sometimes a curry essence, allspice, cumin - there's that warmth again.  My mom learned to make it and it's stayed a staple in our family for decades since we lived there.  It usually includes raisins and pine nuts and, honestly, I'd love to have used those in this dish butttt I didn't have any and wanted pork chops flavored this way RIGHT NOW and heaven forbid I plan anything in advance so....here we go.

It's seared pork chops, veggies and canned garbanzos + tomatoes, tons of spices.  The everything roasts together in the oven and the sauce thickens, then we top the whole mess with crispy sage and the brown butter used to fry the sage leaves.

Fall, but sexier, you know?

You need bone-in pork chops.  This part is key for the chops not drying out while the sauce and veggies cook.  You also need an onion, carrots, garlic, canned tomatoes and chick peas, cumin, allspice, cinnamon, butter, and fresh sage. 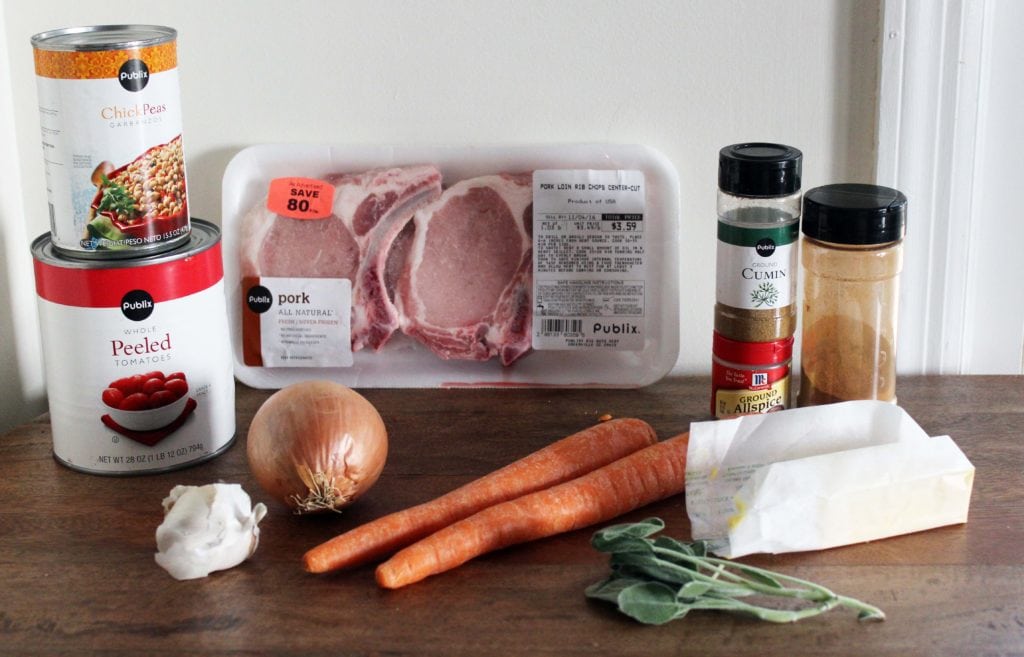 To prep, mince the garlic, dice the onion, and cut the carrots into chunks.  Then, preheat a large ovenproof skillet to medium-high heat with some olive oil and butter, and turn the oven to 400F. 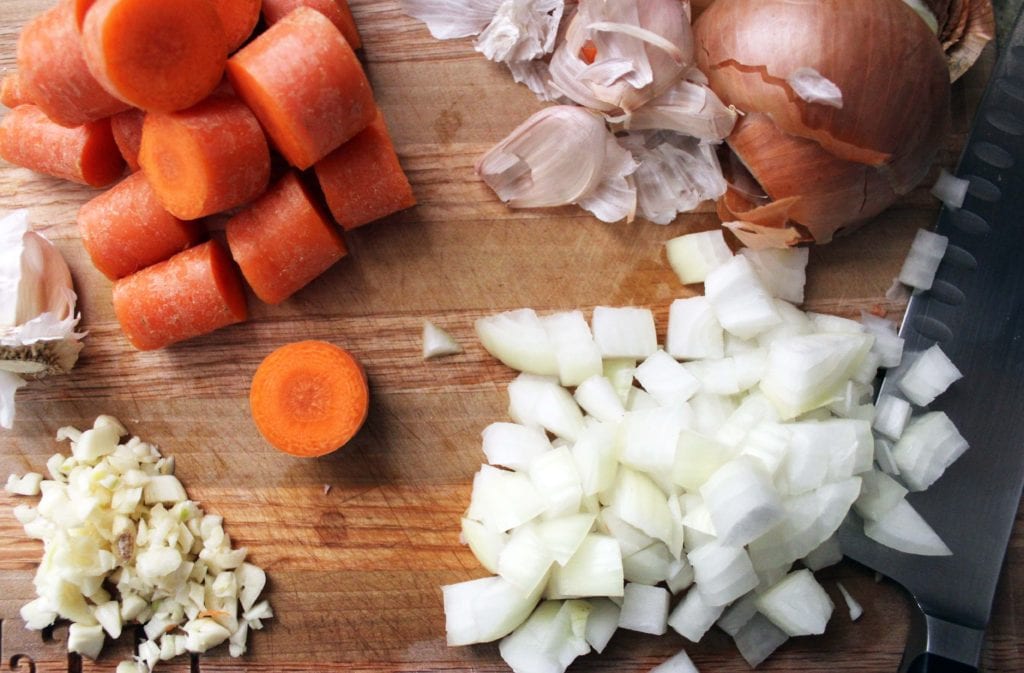 When the skillet is very hot and the butter foams, add the pork chops and sprinkle them with salt.  This is where a big skillet is necessary, especially if you're cooking more than 2 chops.  Brown the chops in batches if you need to so they get nice and crispy on the outside. 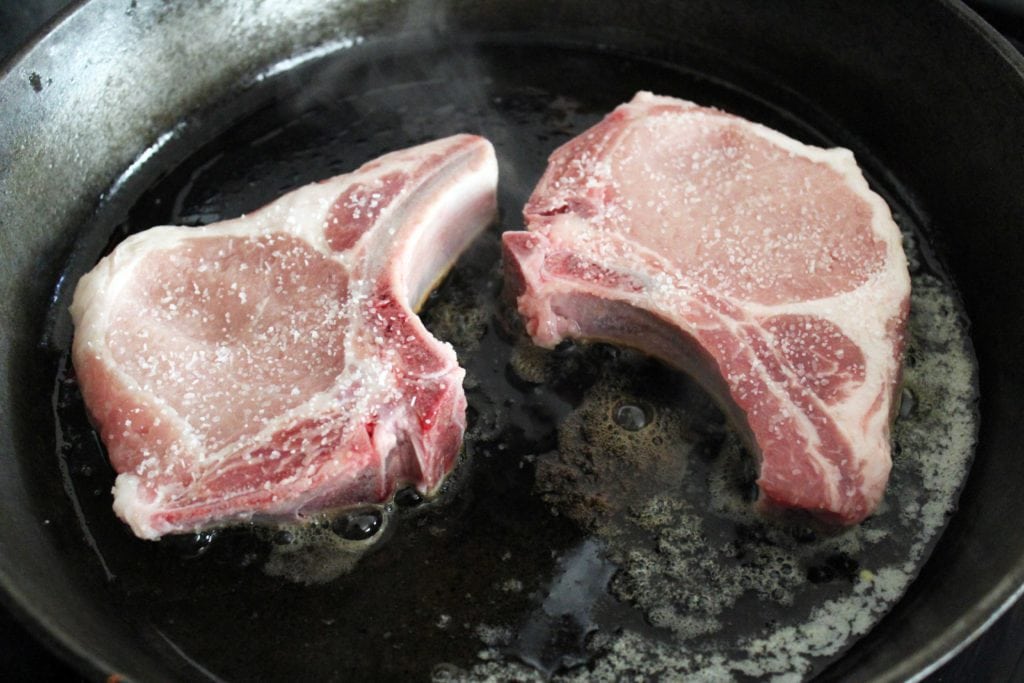 After 3 minutes (or as soon as the pork is brown), flip the pork chops and let them brown on the other side. 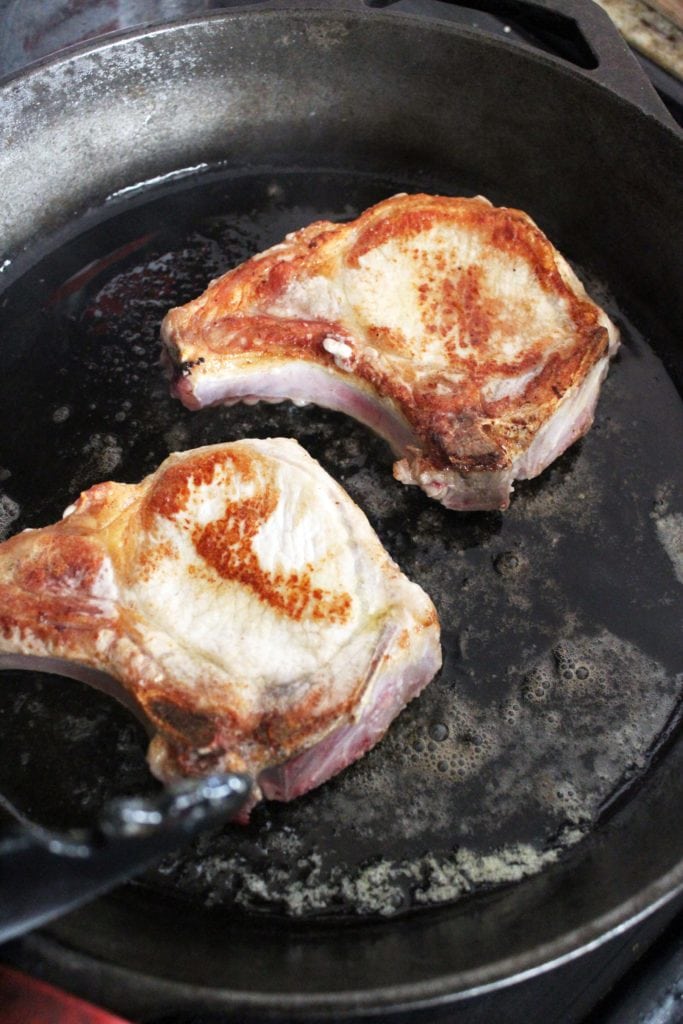 When the pork chops have browned on both sides but aren't cooked through, remove them from the skillet.  Add the carrots, onions, and garlic with a sprinkle of salt.  Stir the veggies in the skillet for 2 minutes just to get them started cooking, then add the spices, chick peas (drain them first!) and tomatoes.  Crush the tomatoes in your hands as you dump them into the pot. 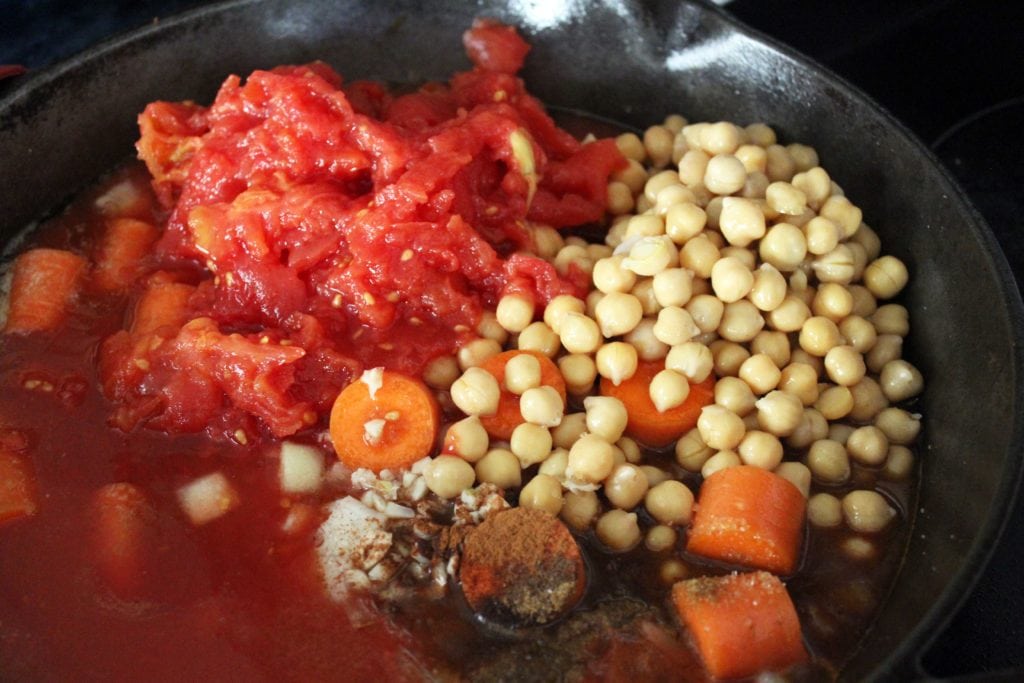 Now, stir everything together, turn the heat off the stove, and add the pork chops back to the skillet with the veggies and tomatoes. 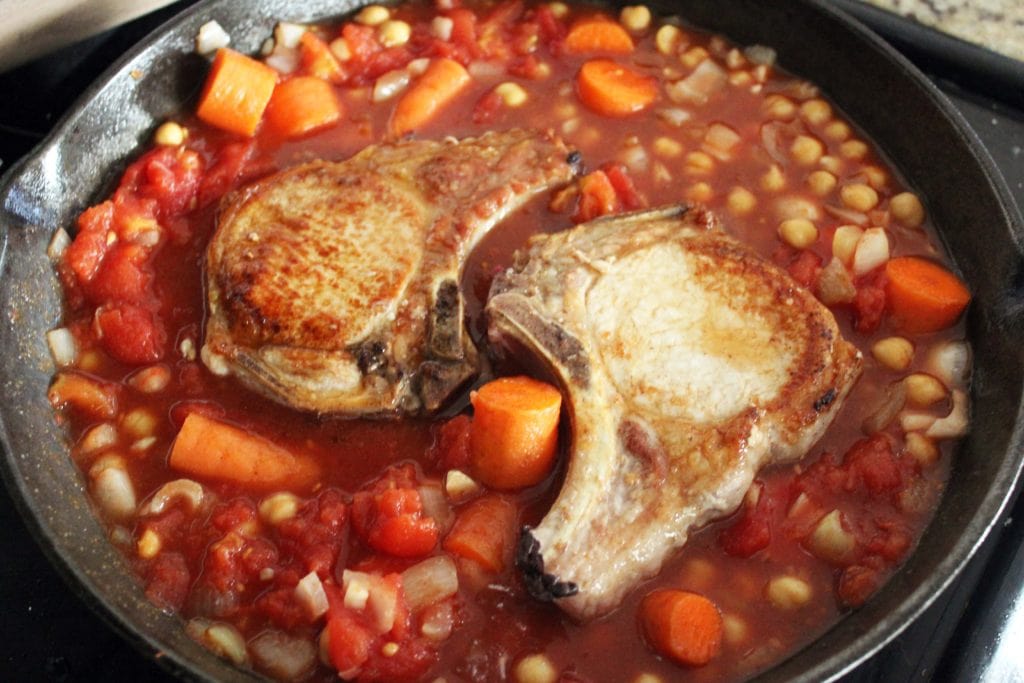 Put the skillet in the oven uncovered and let the dish roast for 20-30 minutes.  The pork will cook through gently and the veggies will roast and get soft.  The tomato juice will evaporate and thicken a little and everything comes together so nicely.  While the dish is roasting, we'll fry the sage for topping. 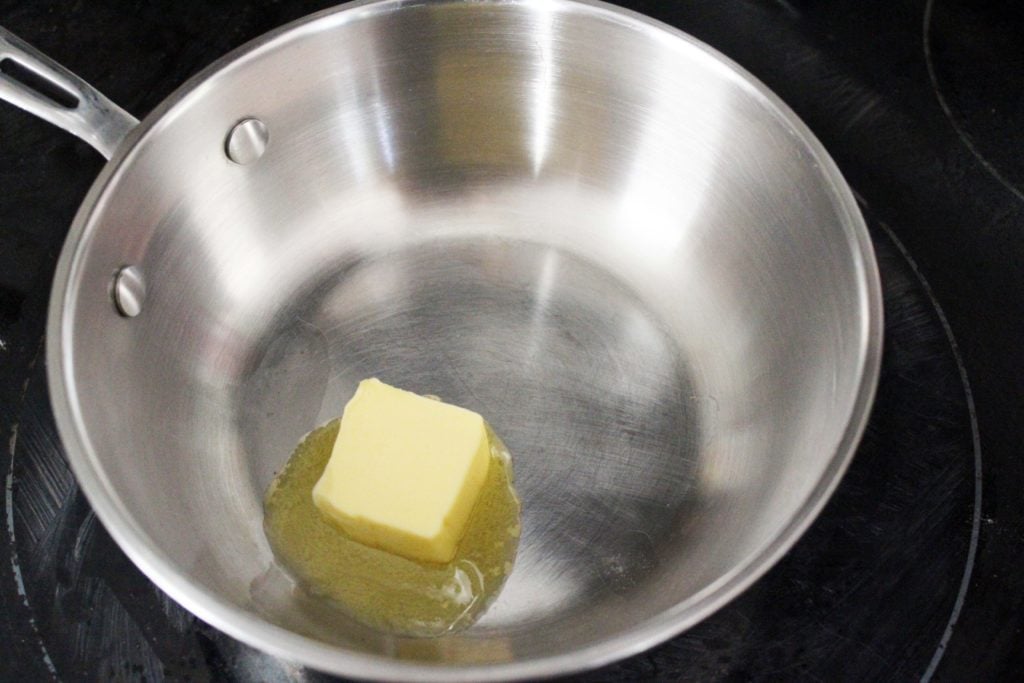 Fried sage = life.  First, heat some butter in a little skillet.  When the butter melts, swirl it around in the skillet until it starts to juuuuust barely brown on the bottom. 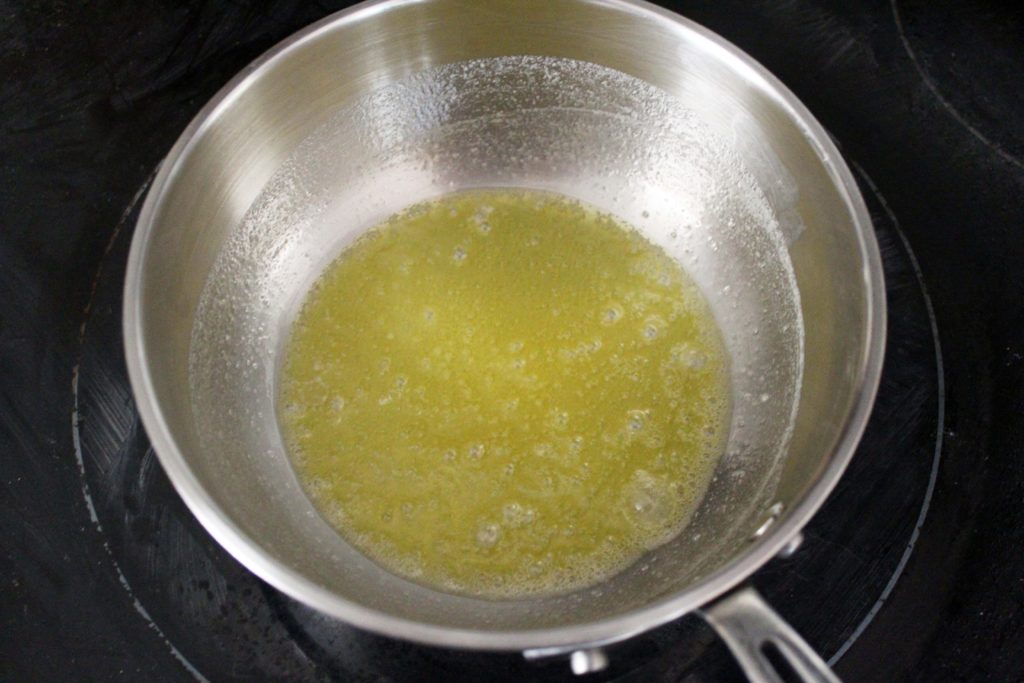 Then, add the sage leaves!  They should sizzle and start to turn bright green immediately. 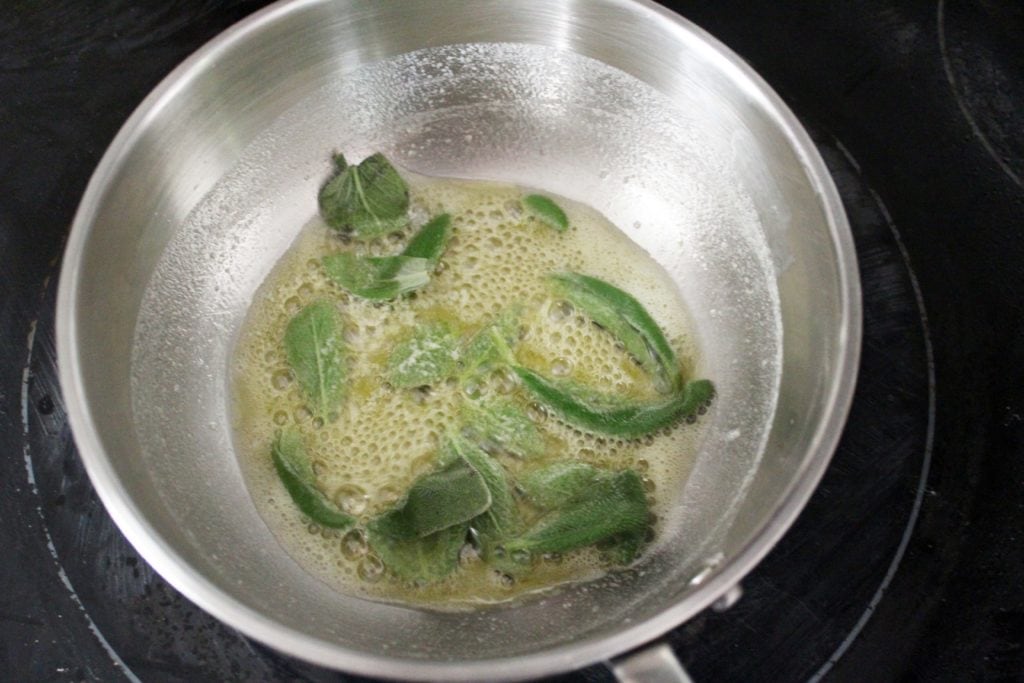 Fry the sage leaves for about 90 seconds until they darken just slightly, then remove them to a paper towel.  Turn the heat off the skillet, but save the brown butter.  You're not an animal, and you're going to want to drizzle this over your dinner when it's done cooking.  Promise. 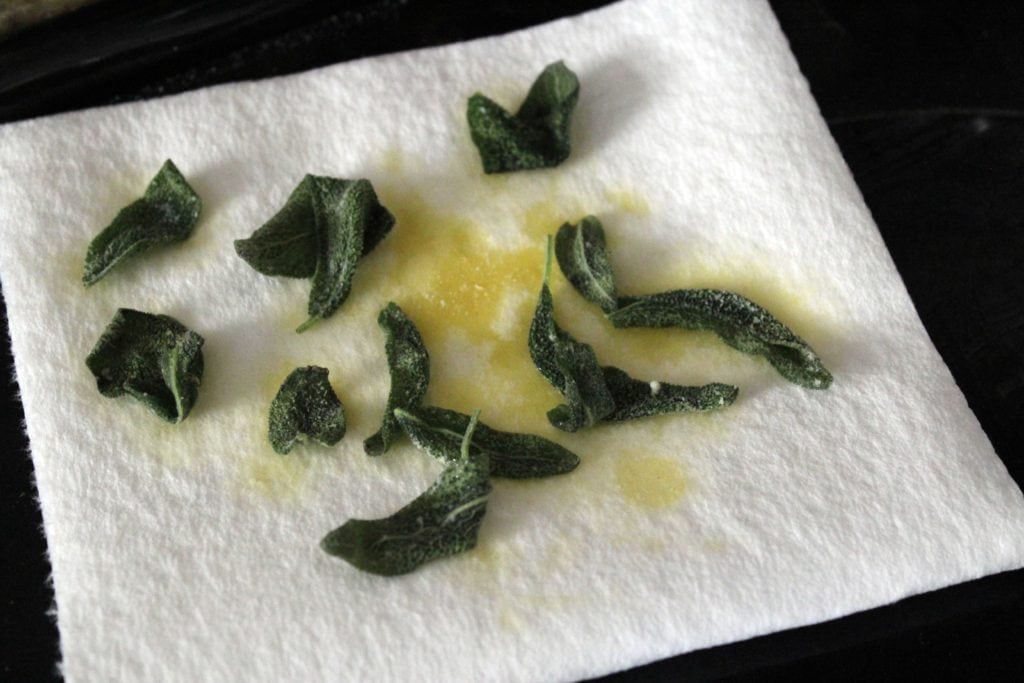 After 25 minutes or so, check the skillet in the oven.  If the carrots are tender, it's time to eat!  If not, give the dish a few more minutes in the oven.  When the veggies are soft, take the skillet out of the oven and let the pork and veggies rest for 5-10 minutes. 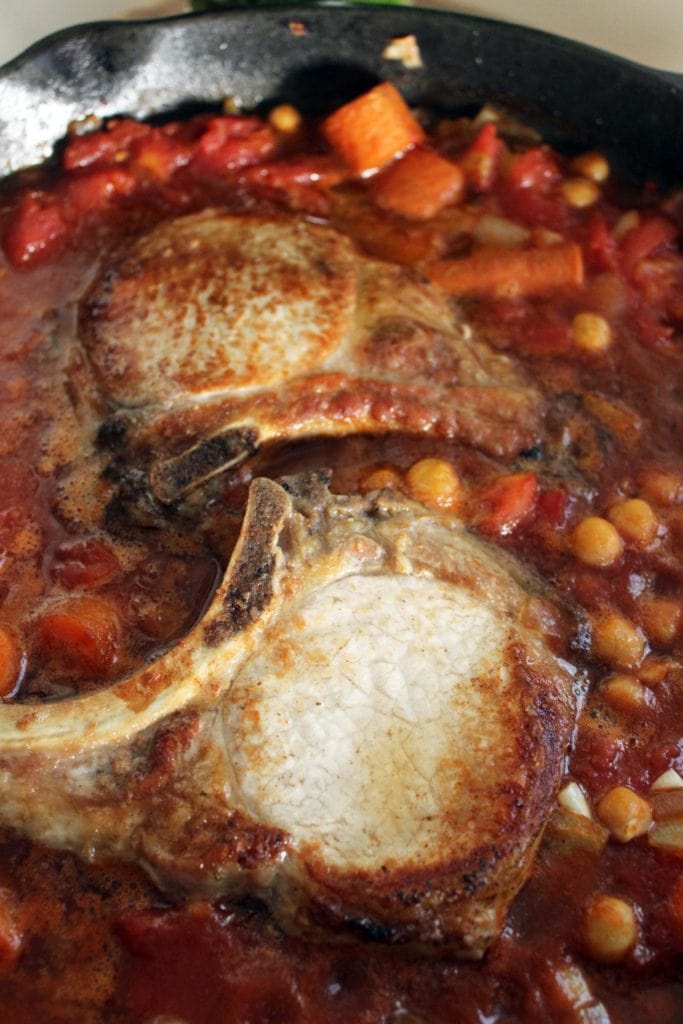 Then, because you are worth it, drizzle the brown butter all over the pork chops. 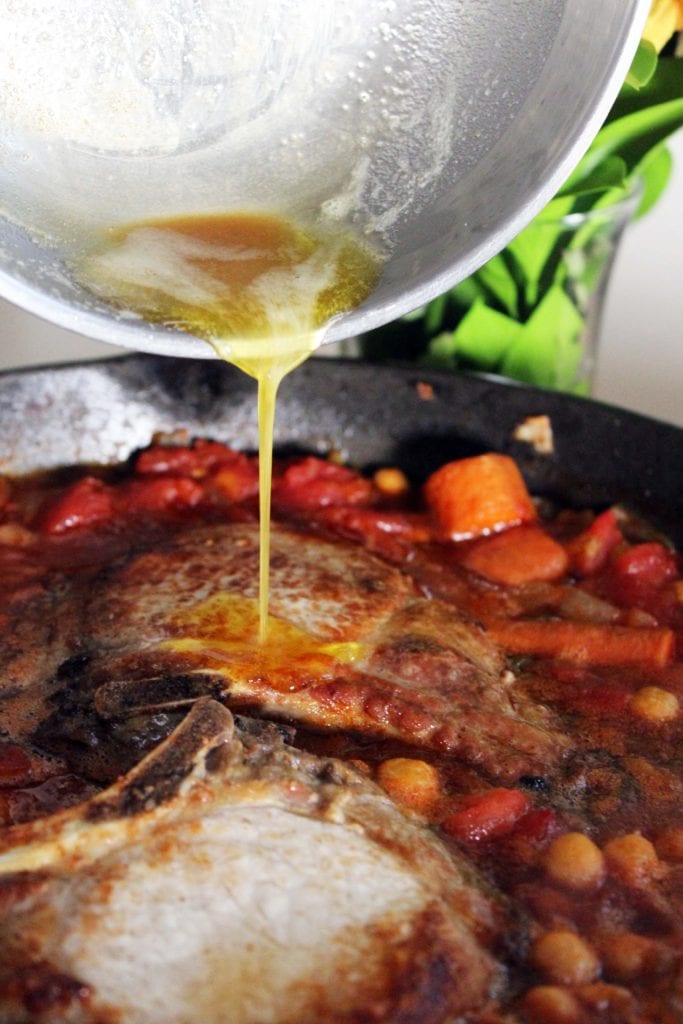 Serve the pork chops with some veggies and sage leaves on top. 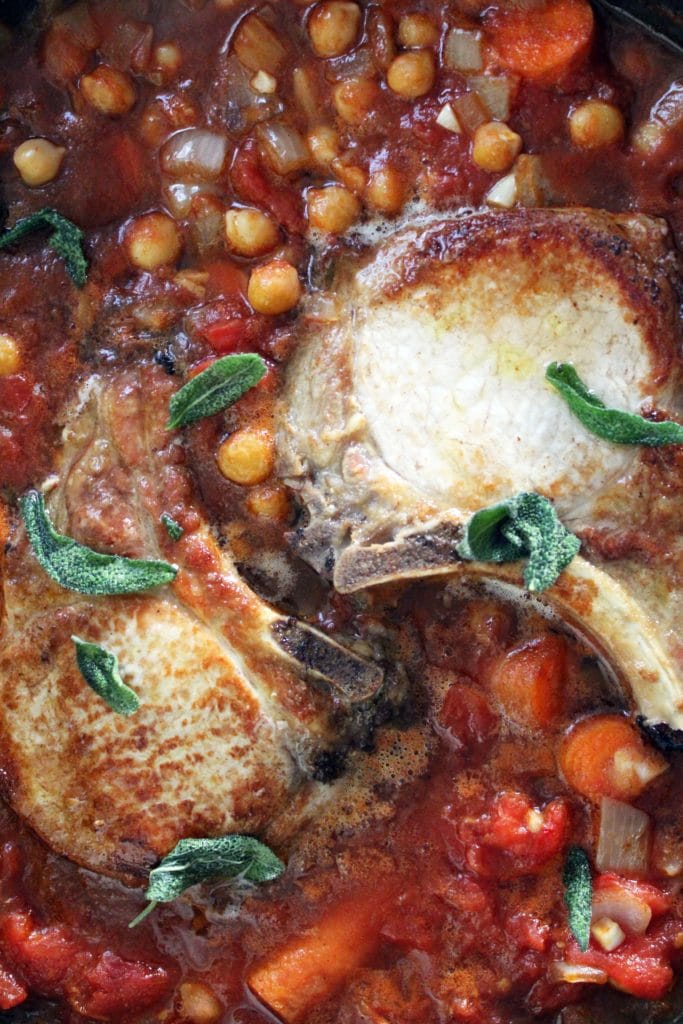 The only side dish you need should be a piece of bread that can only be described as a hunk.  The sauce that the tomatoes and spices make in the oven is ridiculously good, and you'll want something to mop all that up with.  It almost feels like a tomato gravy because it thickens so much in the oven. 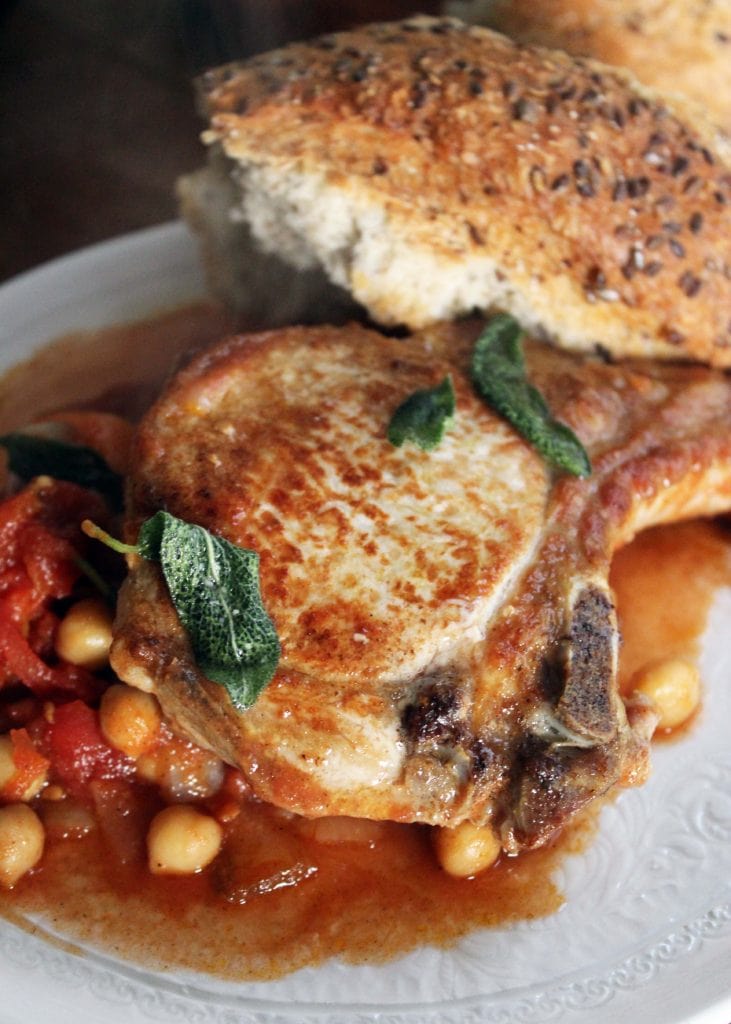 Fall without being basic (though you'll never find me saying that's a bad thing), check!  This is one of my favorite spice blends/flavor combinations, and baking everything in the oven together makes the flavors even deeper and more blended.  You can make it for election night and eat the whole loaf of bread to mop up your feelings.  Unless you're like me and don't necessarily need an excuse to eat a whole loaf of bread, but that's a topic for another day.  Enjoy! 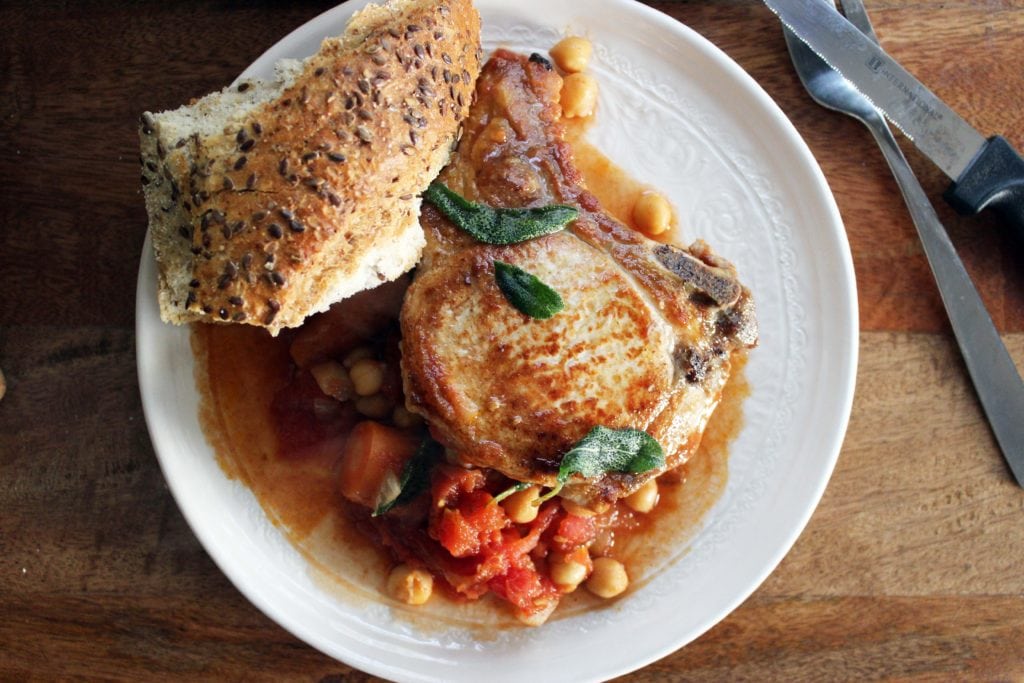 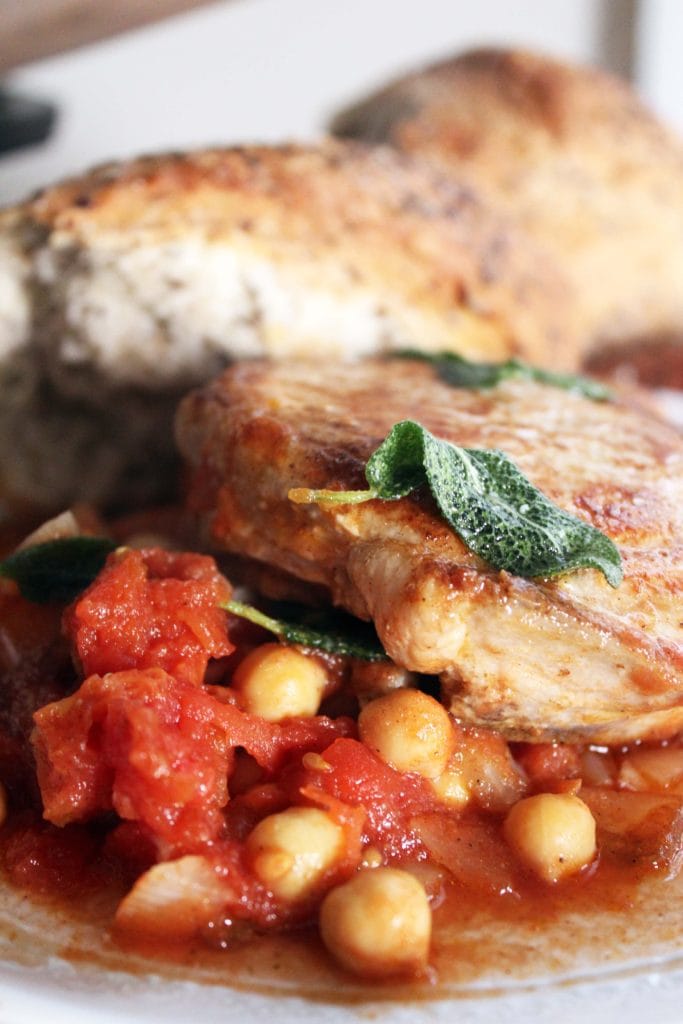 « 2016 Halloween Photodump
Good Talk, See You Out There »