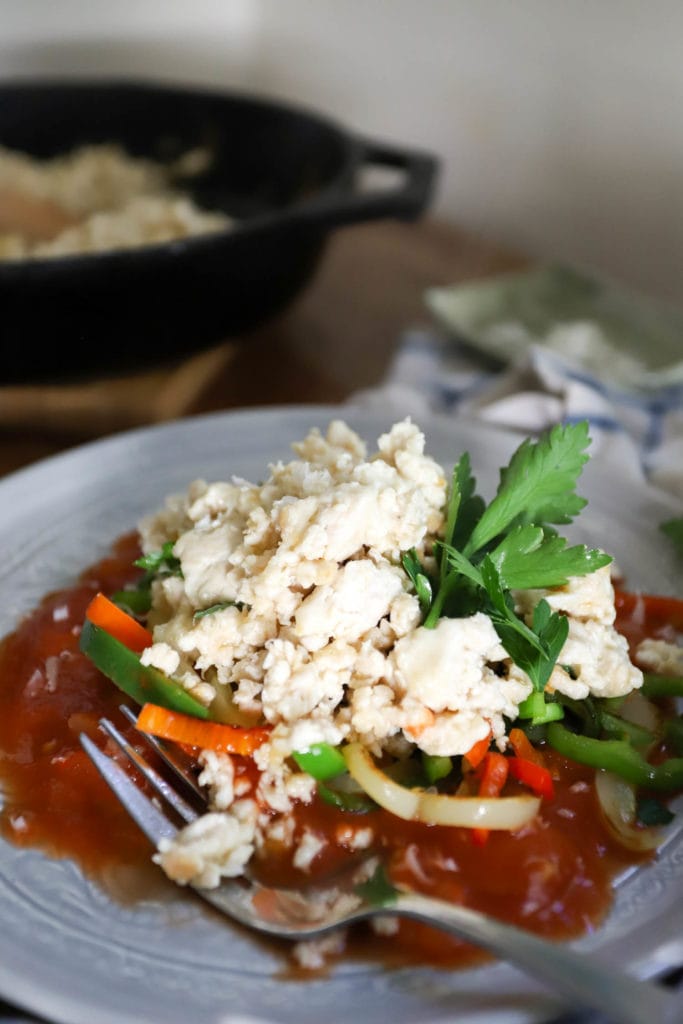 I so, so hope that you took advantage of the extra hour of sleep last night. We kept Beck up until NINE and then she slept until almost 8, which was a huge win for night one. She has a teeny cold, which is making her extra sleepy, which is kind of perfect for re-doing a sleep pattern. ...hurray for my kid being sick?

Let's get to dinner. What you need to know is that Jay and I, for whatever reason, do not have "regular" meals. Things we eat once a week, things that are US, that kind of thing. Until now. I do not mean to sound dramatic, I need you to understand. This is a new favorite meal that literally is good and healthy enough to be made once per week.

Jay has been eating low carb recently, which means that I've been making lots of meals with no carb side dish and eating hunks of bread with my dinner. I find this to be acceptable and delicious. Local butter is usually involved. This dish, though, can allllllmost do without the hunk of bread.

The base is peppers, any kind you like, sliced super thinly to form almost a noodle base. Then we top that with marinara, my favorite kind or any kind that you enjoy. Then THAT is topped with this skillet baked chicken mixture that features ground chicken for speed, cheese for flavor, and spices to round everything out. The chicken mixture is by far the star of this dish, and I have all kinds of ideas for how to use it - probably as a burger or on a sandwich next.

The downside here is that the dish isn't particularly cute. It looks...like ground white meat chicken, which isn't the most gorgeous of foods. But trust me when I say that the flavors in this dish are SO good and feel very complex and fancy without a ton of fat, calories, or effort. Promise.

You need! Ground white meat chicken. Other ground chicken is fine too, but we add a ton of flavor to the chicken with spices and cheese so you can get away with straight white meat here. Butter to add a little bit of flavor to the chicken. Other flavors for the meat are salt, onion powder, garlic powder, parmesan, and grated fontina or mozzarella cheese. Then it's a ton of thinly sliced peppers and some marinara. 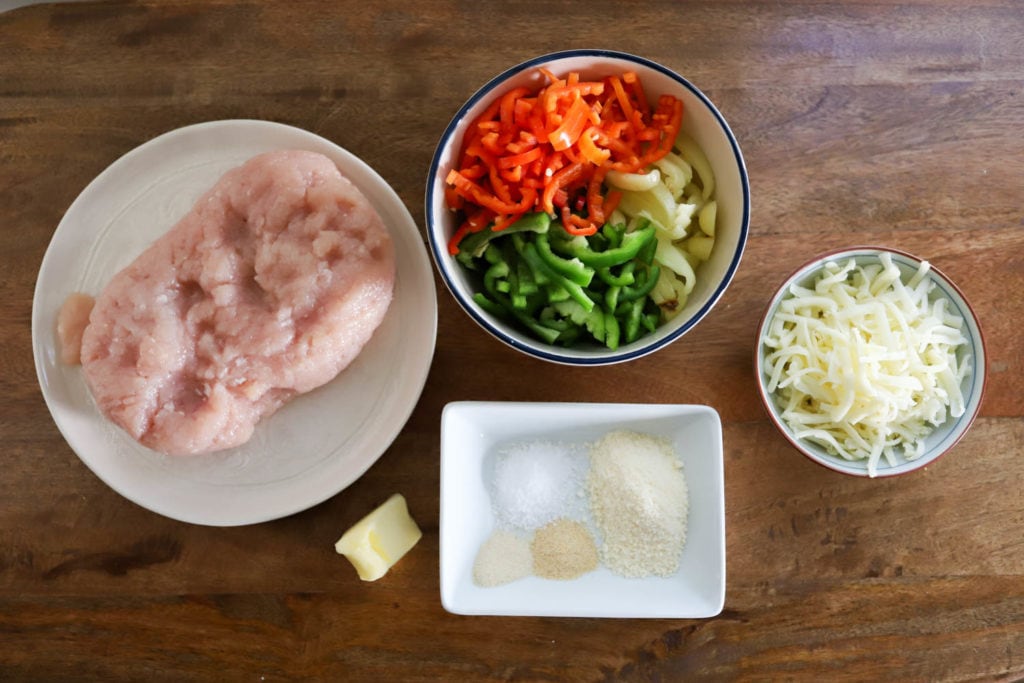 This comes together in three parts; the sauce, the peppers, and the chicken mixture. Then you can layer it or serve it in bowls, anything you like. I make the marinara way in advance and then start on the chicken, then while the chicken is cooking I make the peppers, which are the quickest part. For the chicken, heat a skillet (one that can go in the oven) over medium-high heat with some olive oil and the butter - a good amount of both since the meat is so lean. When the pan is hot, add the chicken and start to break it up with a spoon to crumble and brown it. 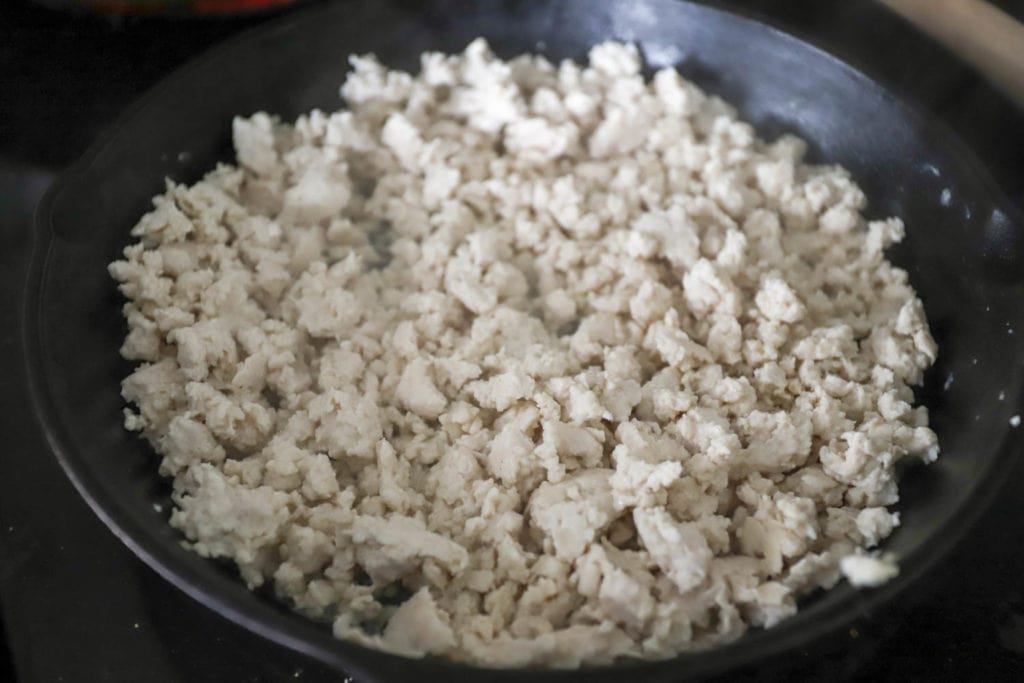 When the chicken is cooked and crumbly, pour in all of the spices and the parmesan. Mix everything together really well to evenly coat the chicken in the seasoning. The parmesan will crisp a little bit in the skillet, and the flavor is SO good. 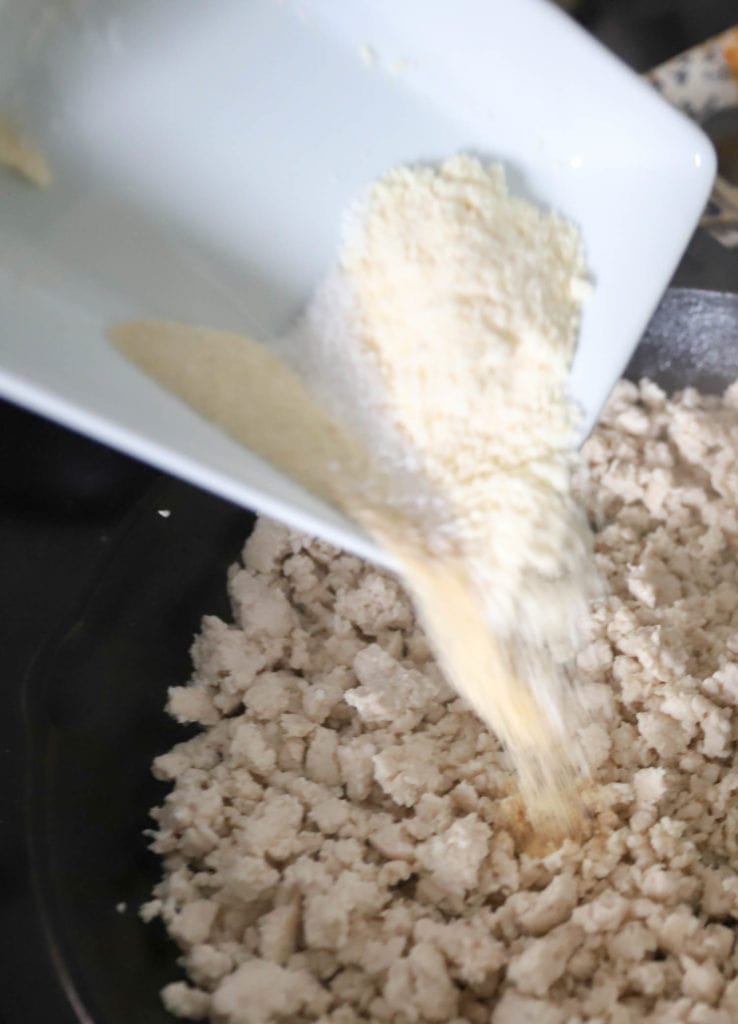 Now, at this point you'll preheat a skillet for the peppers and turn the broiler to high. Scatter the grated cheese all over the top of the chicken mixture, and turn the heat off the skillet. 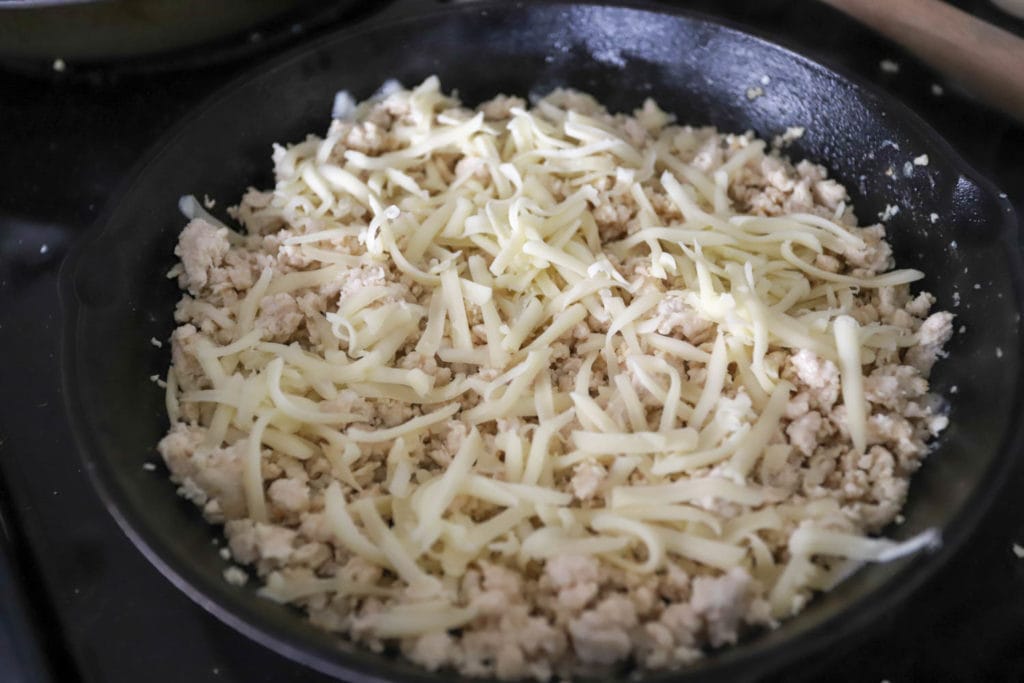 When the second skillet for the peppers is hot, saute the peppers in some olive oil with a sprinkle of salt for about 3 minutes, just long enough to soften them slightly. 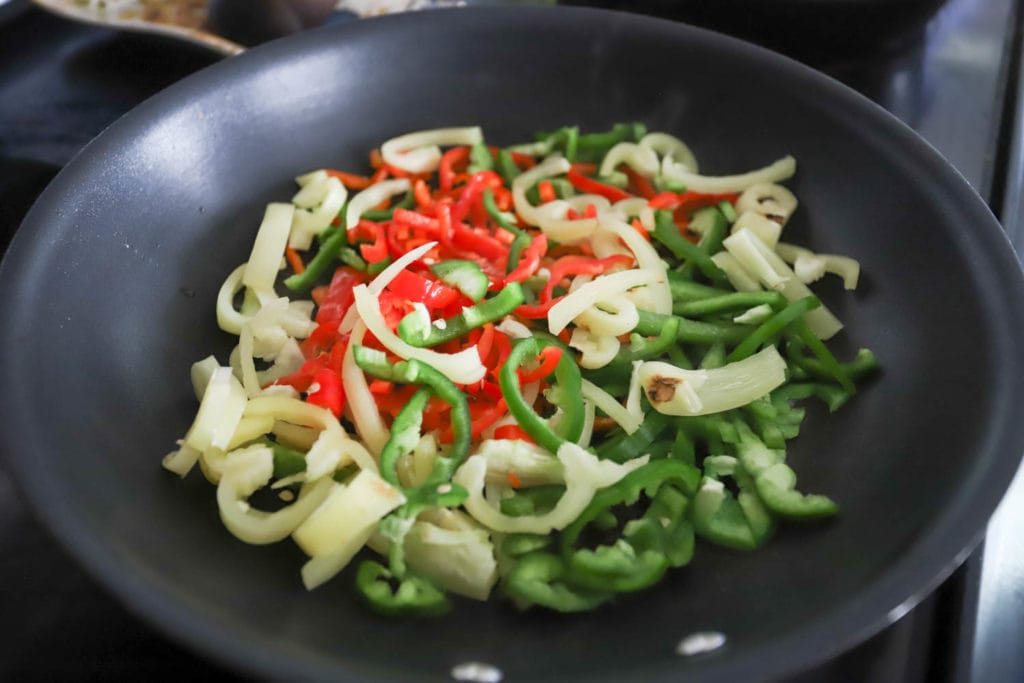 While the peppers are cooking, broil the chicken just long enough to melt the cheese. 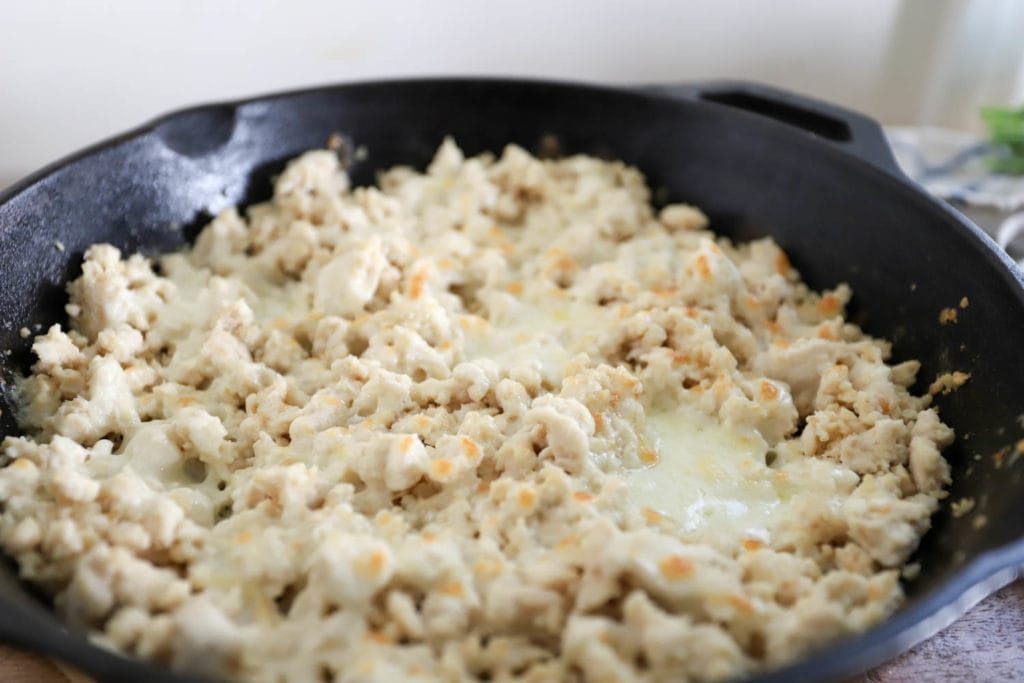 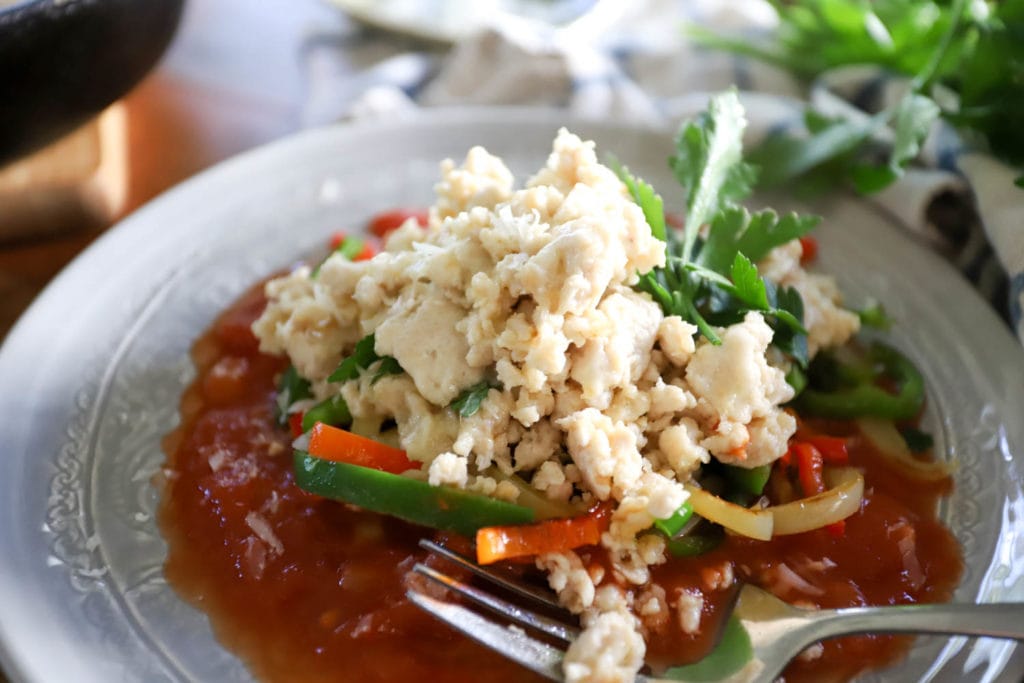 Layer it however you'd like, and go to town! 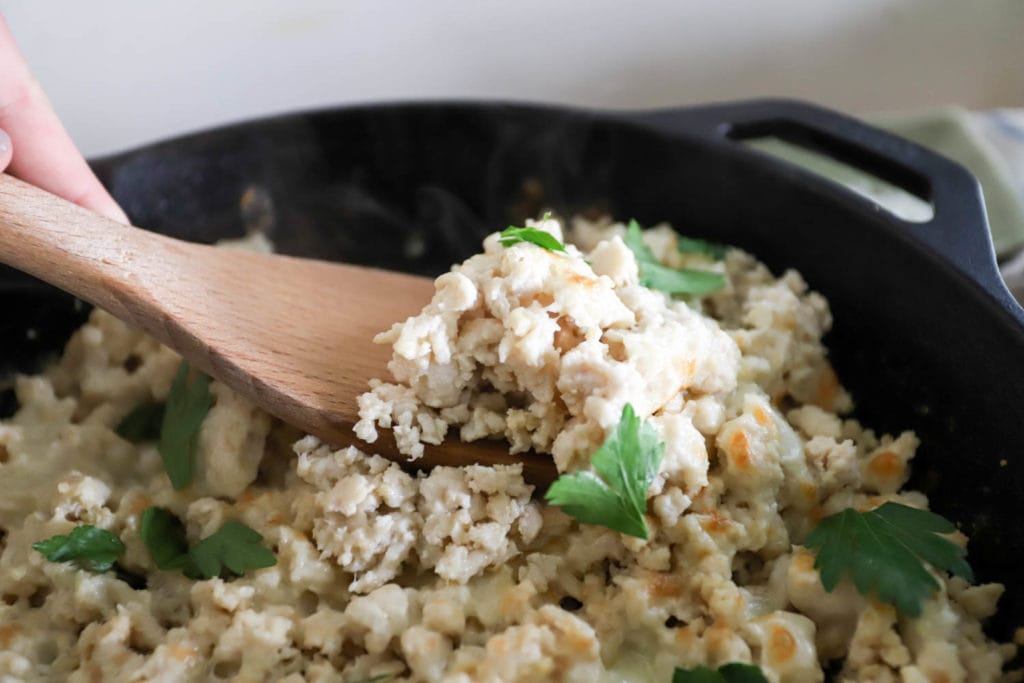 Now, I said before that this totally isn't the prettiest thing I've ever made. But, the flavor on the chicken mixed with the light marinara and crunchy peppers goes together so well, so I implore you to try this sooner rather than later. 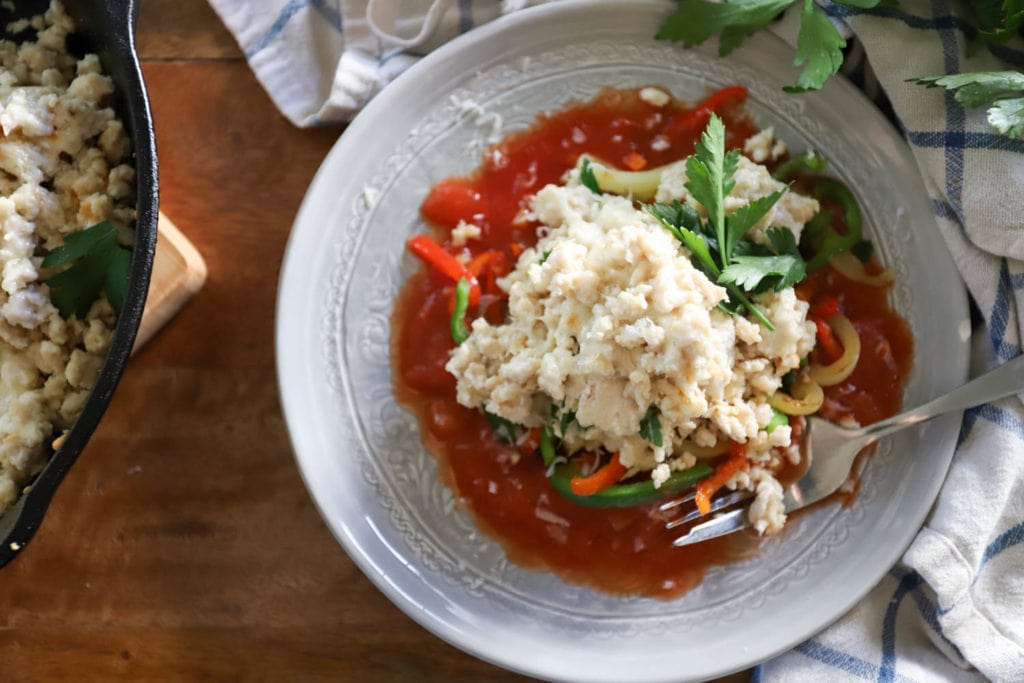 And then once a week after that. Enjoy! 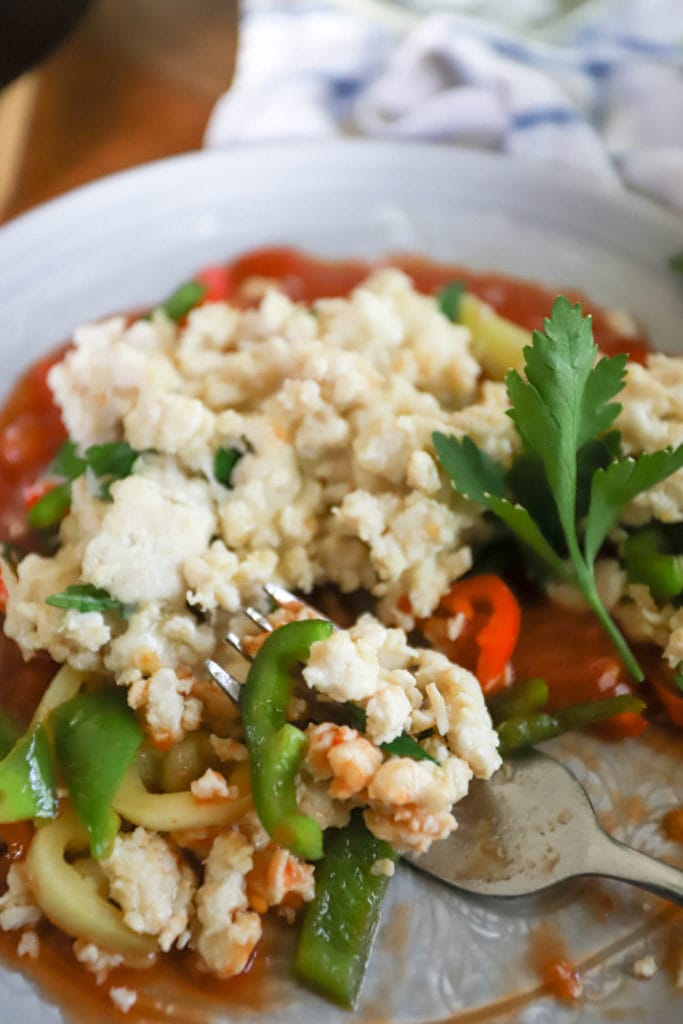