Mac and cheese for dinner tonight! 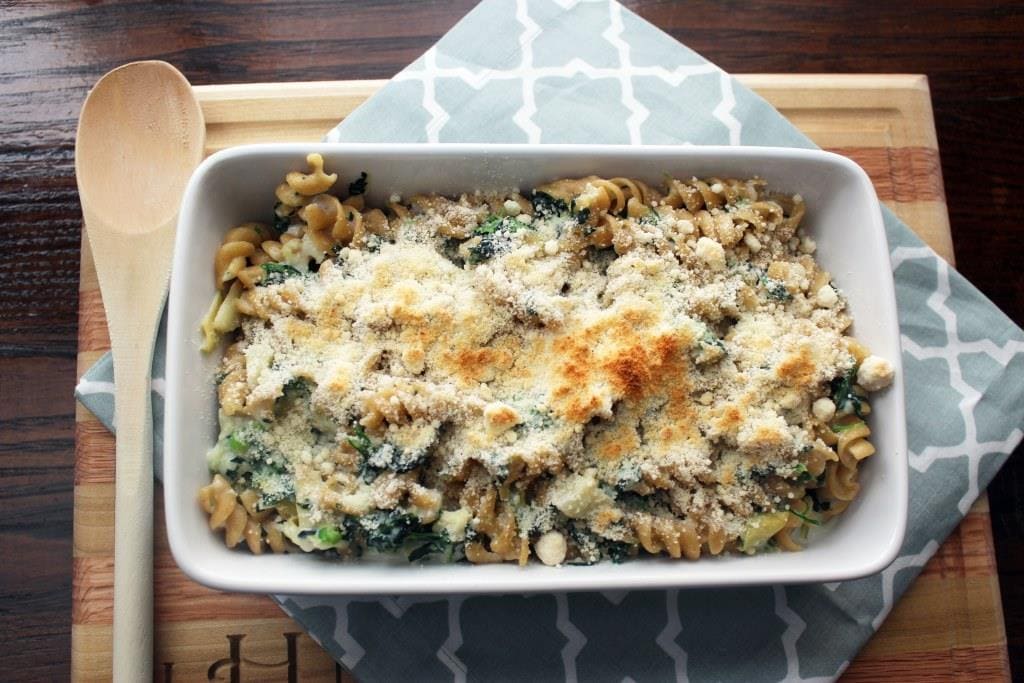 When we were little my mom was alllllll about frozen spinach because it's 1. cheap, 2. fast to prepare, 3. good for you.  The problem with that, of course, was that frozen spinach is basically awful to little kids.  We were food snobs at a pretty young age, what can I say?  Also brats, but food snobs somehow sounds better than standard issue ass-kids.  In my mind. 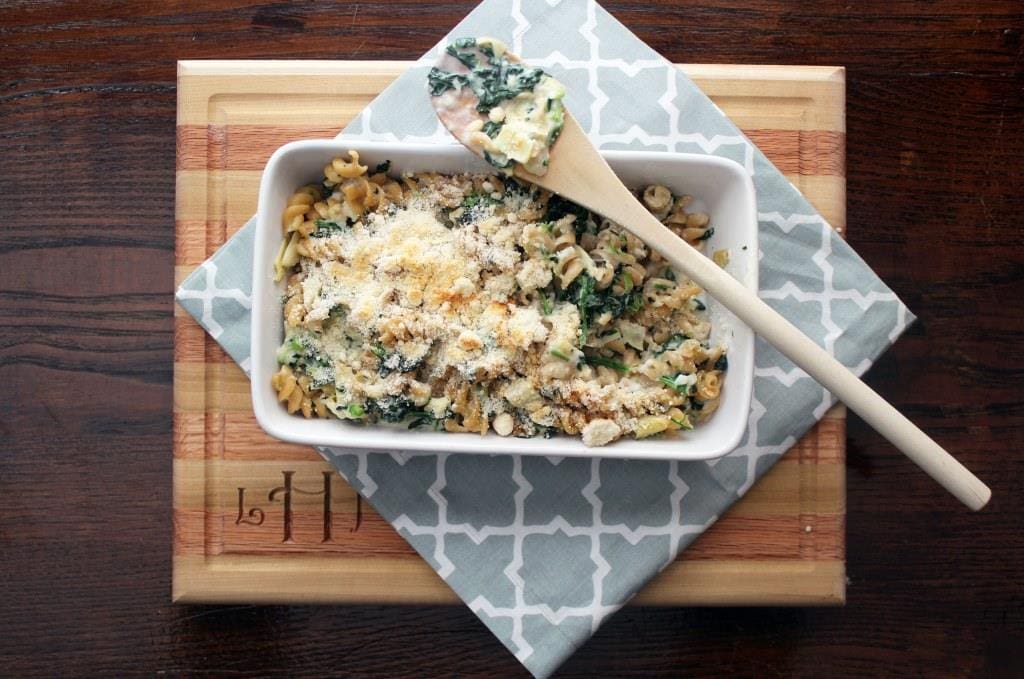 So, homegirl got all smart-like and realized that if the spinach appeared with cottage cheese, parm, and noodles we'd totes eat it up.  And so, our version of Spinach Noodles was born.  We're big fans of cottage cheese. 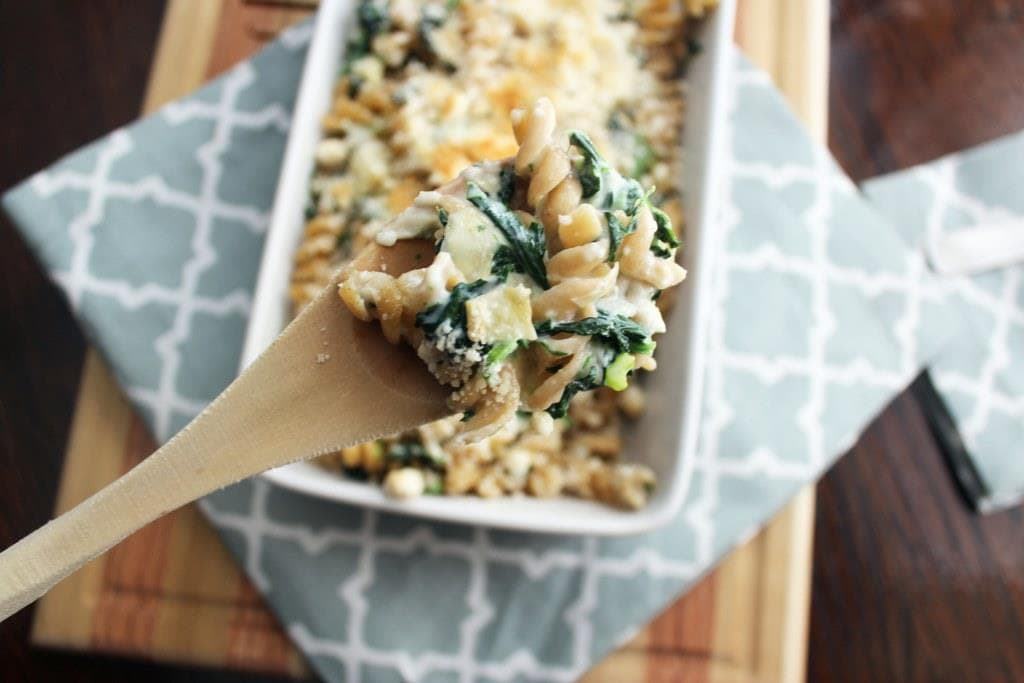 This is my ode to that but a teeeeensy bit fancier.  Healthy, though!  I make a "regular" mac sauce, but with olive oil instead of butter, skim milk instead of whole, and grainy brown pasta to add lots of nutrients and a nutty grown up flavor.  Try it.  You'll love this. 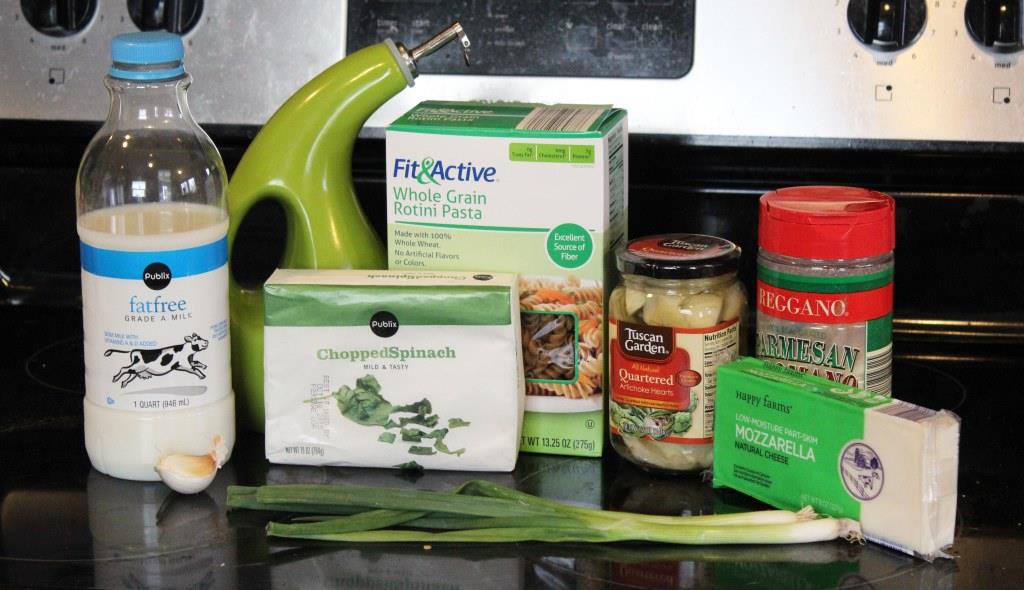 First, drain the artichokes and set them on paper towels, or microwave if frozen. Start a large pot of water for the pasta, too - boil it to one minute less than al dente per the package directions, then drain it and set aside. 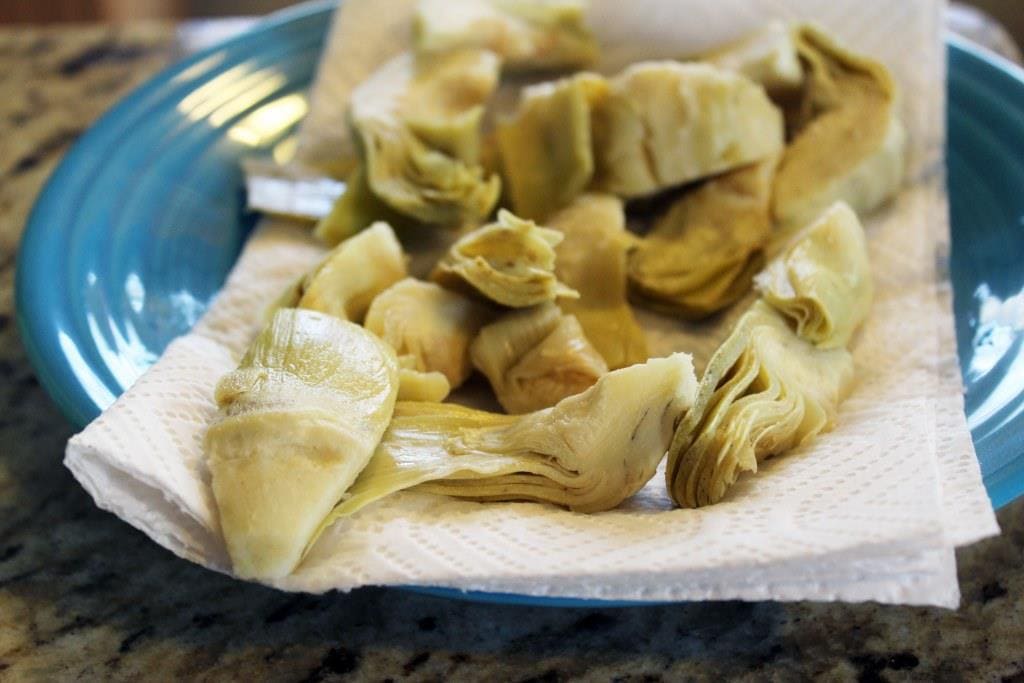 While the pasta's working, grate the cheese. 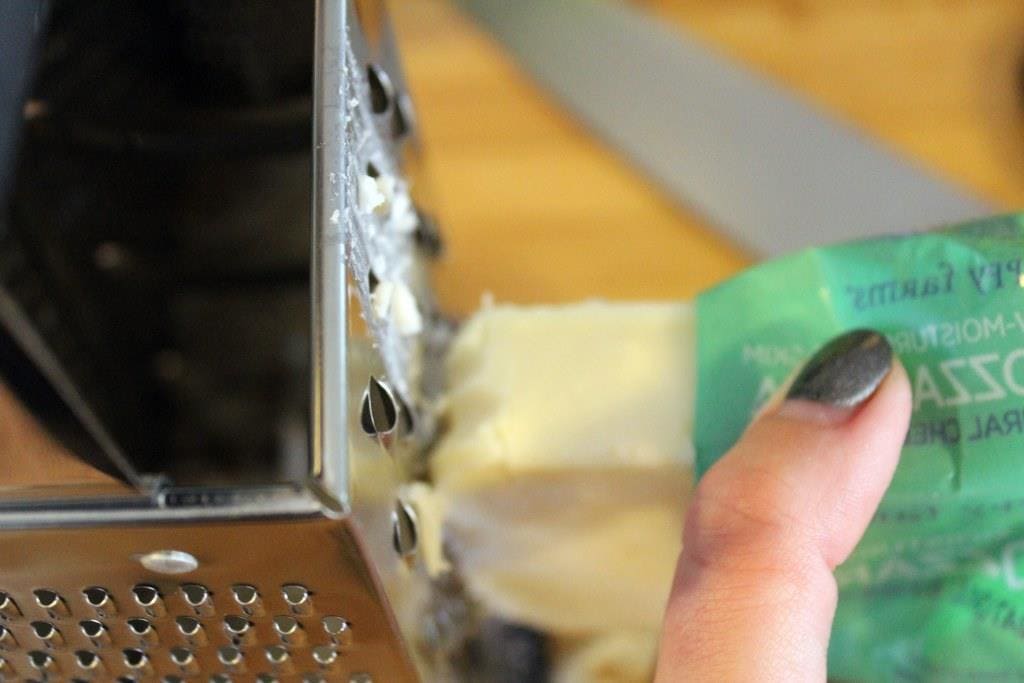 Now, let's start the sauce!  Add the olive oil and flour to a skillet over medium heat. 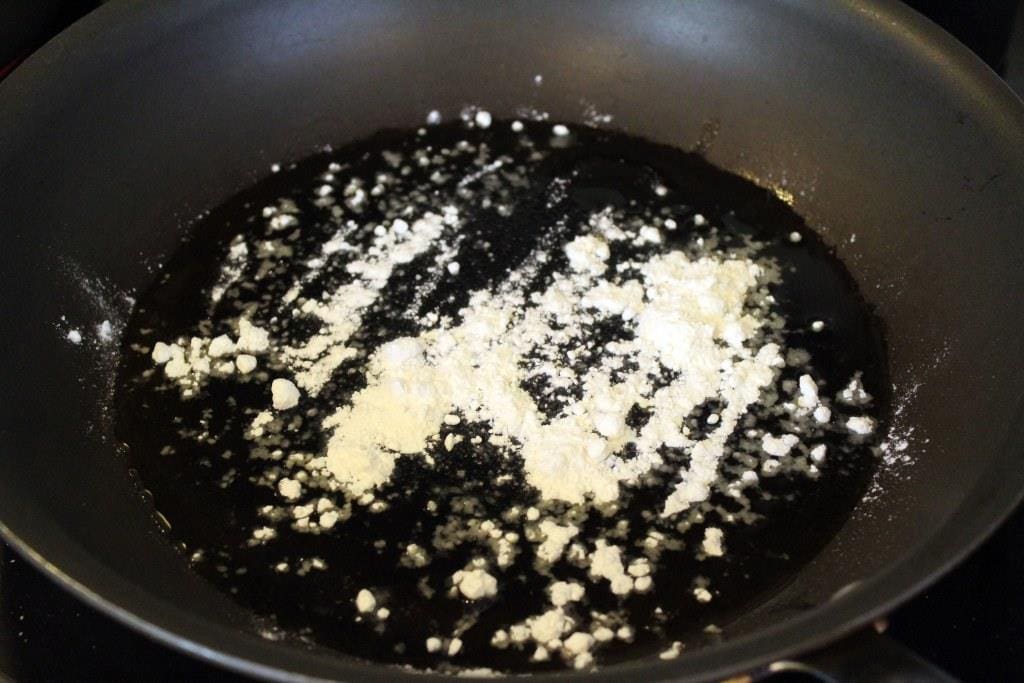 Let warm and start to cook, then whisk to combine until the flour just starts to brown. 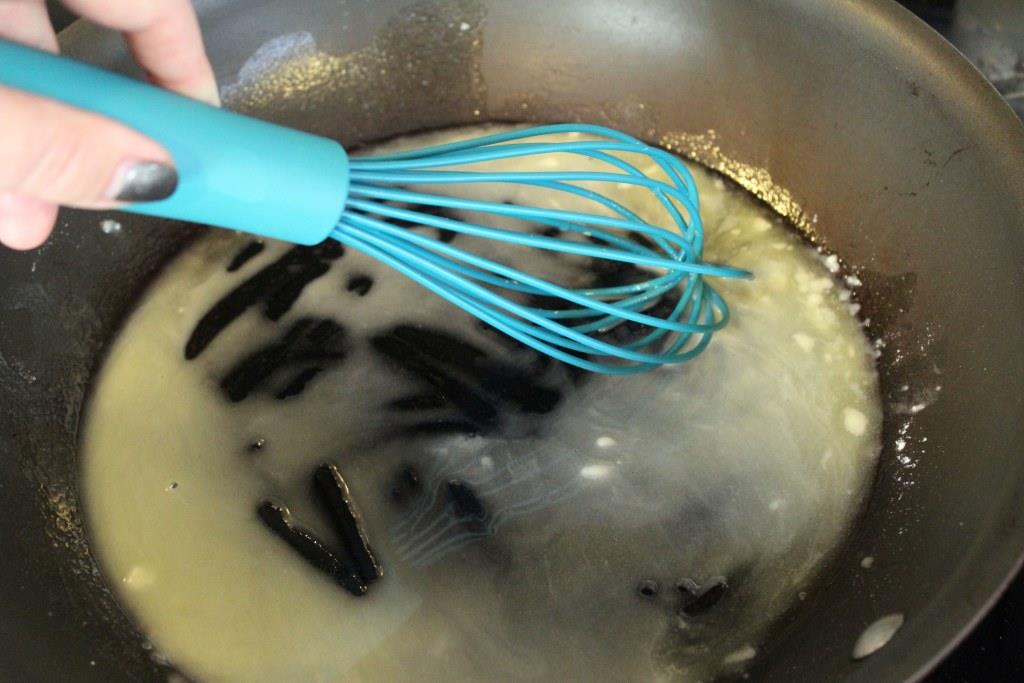 Now, add the milk!  As you slowly pour in the milk, whisk constantly to incorporate the milk with the olive oil/flour mixture. 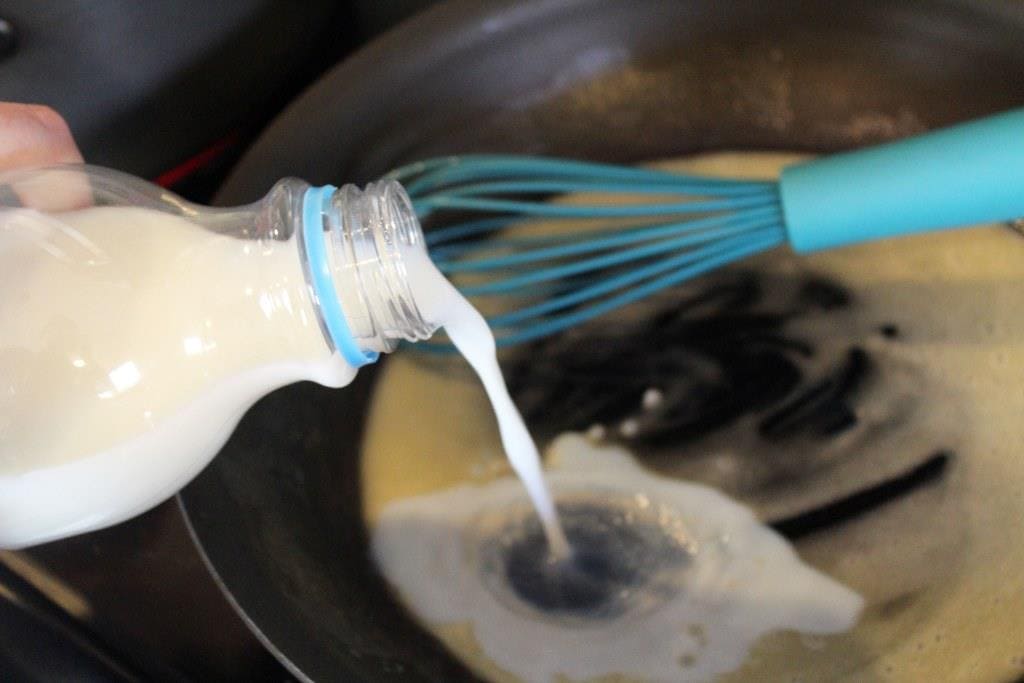 Bring the milk to a bubble, then add the cheese.  Continue whisking or stirring until the mixture is smooth and the cheese has melted. Taste the sauce and add some salt and pepper if you'd like. 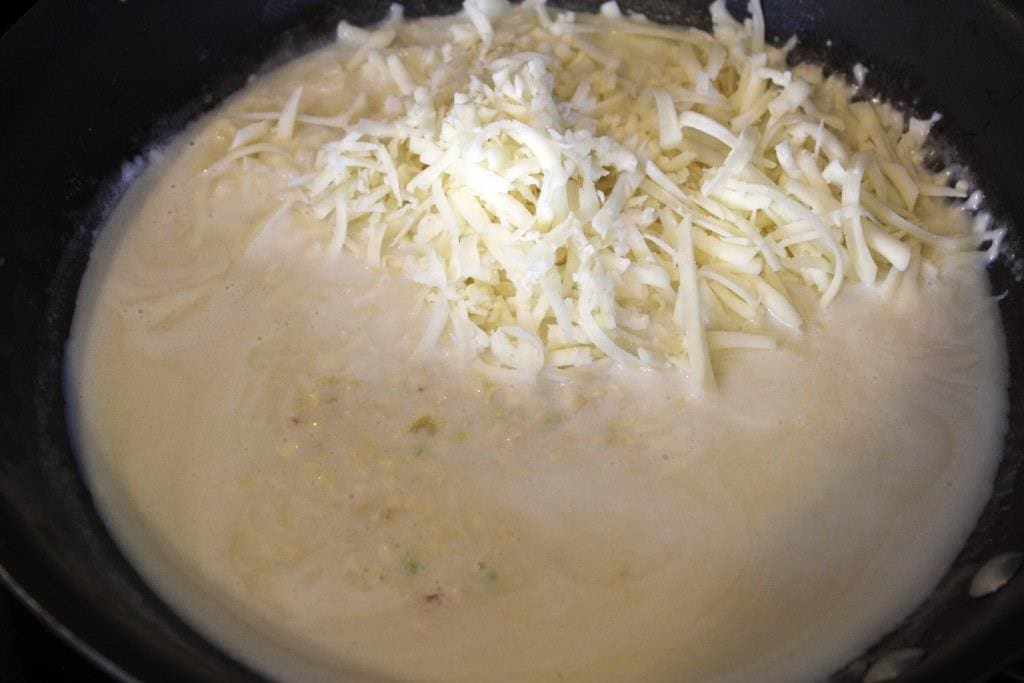 Turn the heat off the sauce to gather your other ingredients, drain your pasta, etc.  Microwave the spinach until it's thawed (2 minutes or so), then slice the green onion. 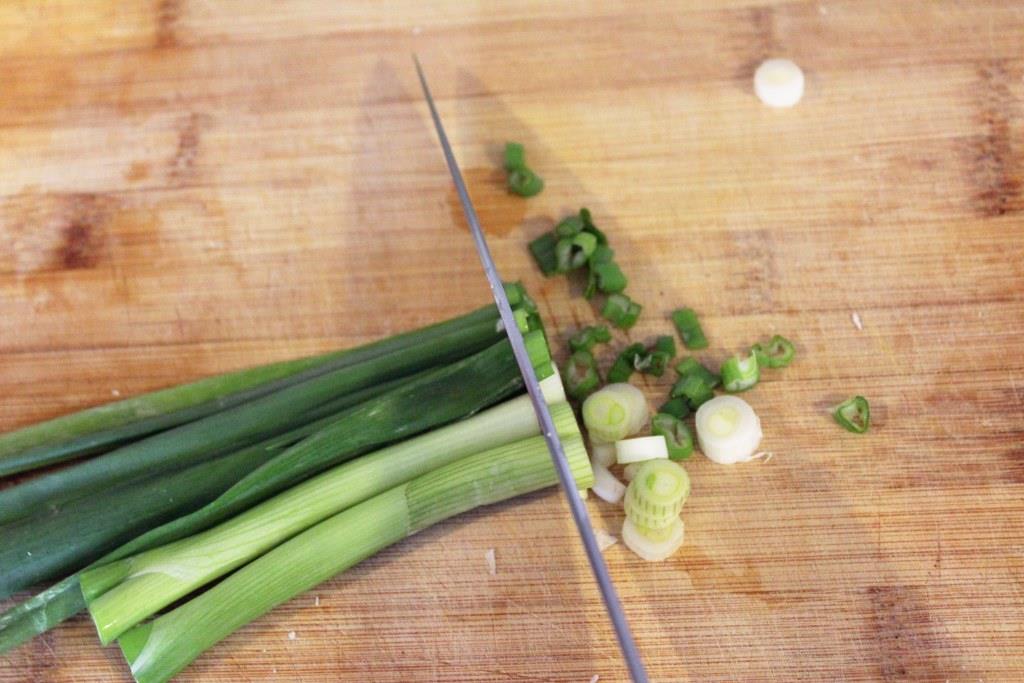 And chop the artichokes that have been draining! 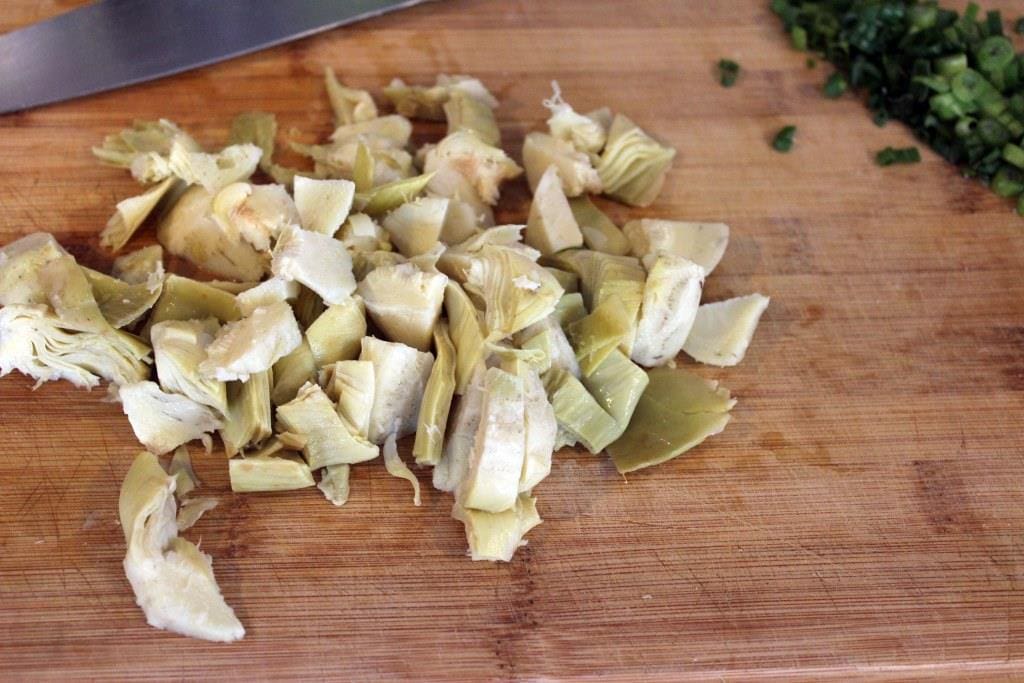 Now, we're ready to assemble.  Add the drained pasta back to the pot, then add the garlic, scallion, spinach, artichokes.... 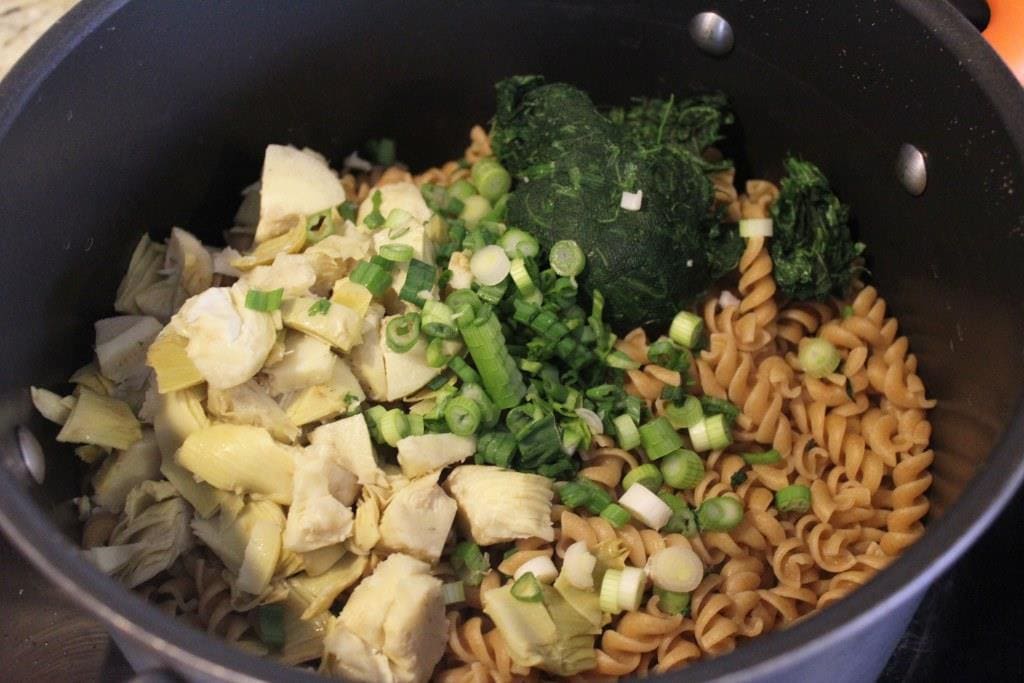 and all the sauce. 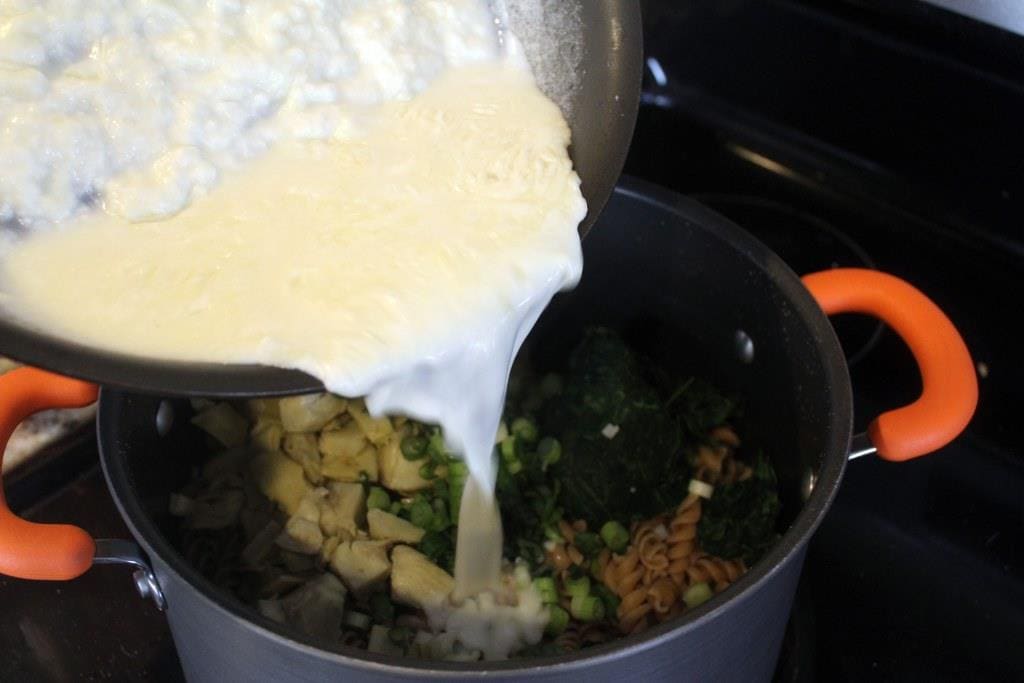 Stir everything together and taste!  Add salt and pepper to your taste, and another splash of milk if needed to create a tiny bit of extra sauce in the bottom of the pot. 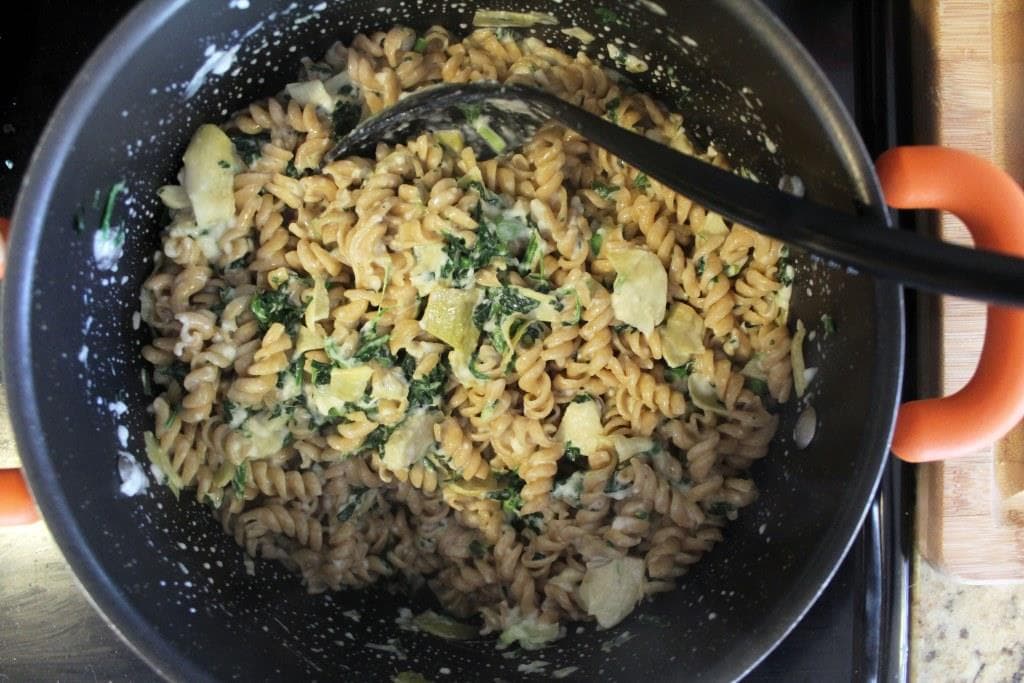 Now, you could of course eat this as is, but I like to pour it into a baking dish and top the whole thing with parmesan. 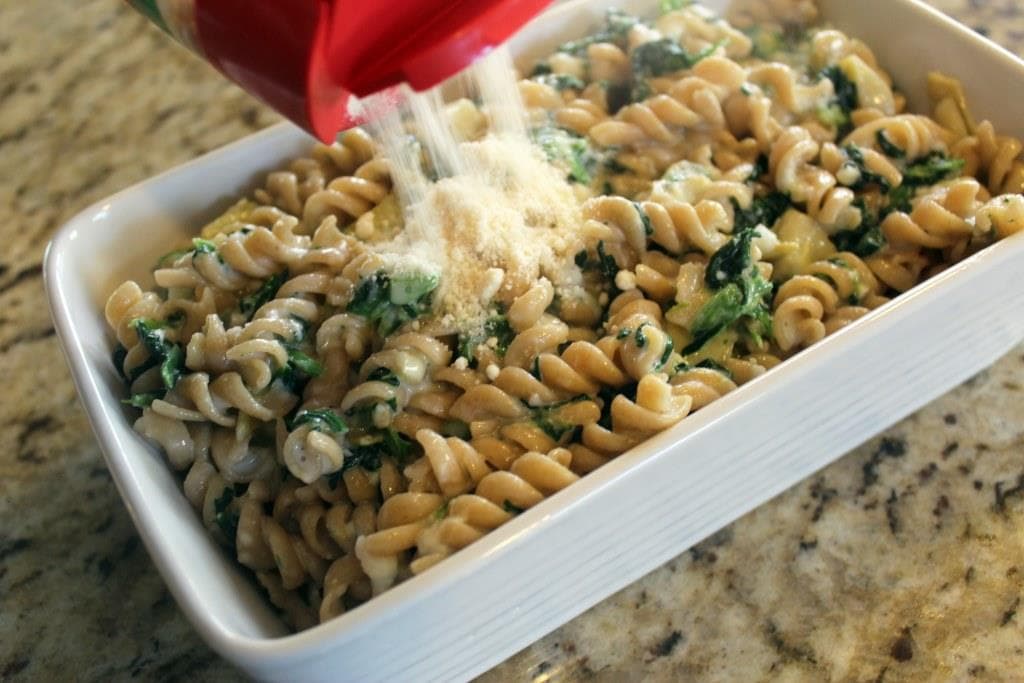 You can bake this right away for a few minutes at a high temp - 425F or so just to brown the top, or you can set this aside for a few hours or days in the fridge, then bake at 350F from cold (cold oven, cold mac, heating together at the same time) until bubbly and hot all the way through. 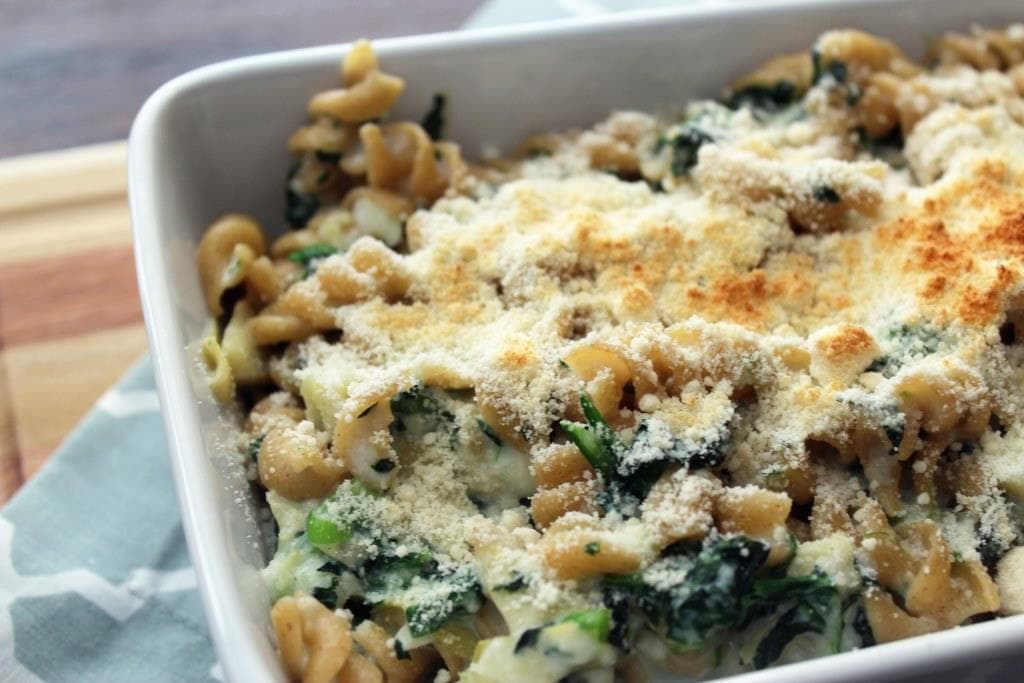 OR.  You can freeze this until you're ready to eat it, then let it thaw on the counter for a few hours before baking as above.  Either way! 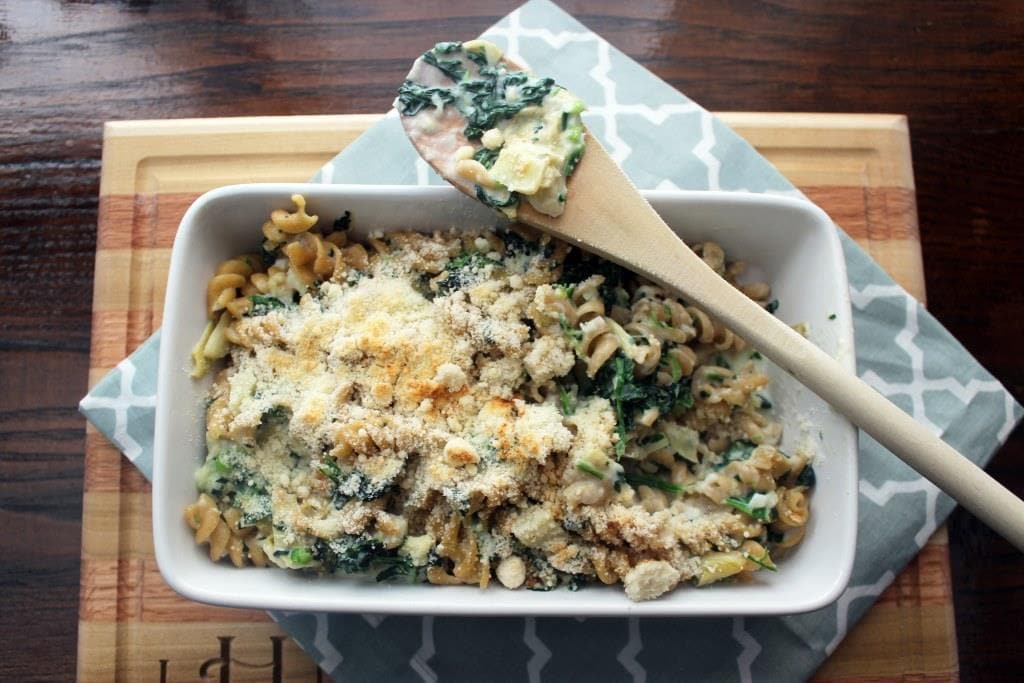 There's one of these in my freezer right now, and I'm totes jazzed to eat it.  Because obviously I'm the type of person that says jazzed. 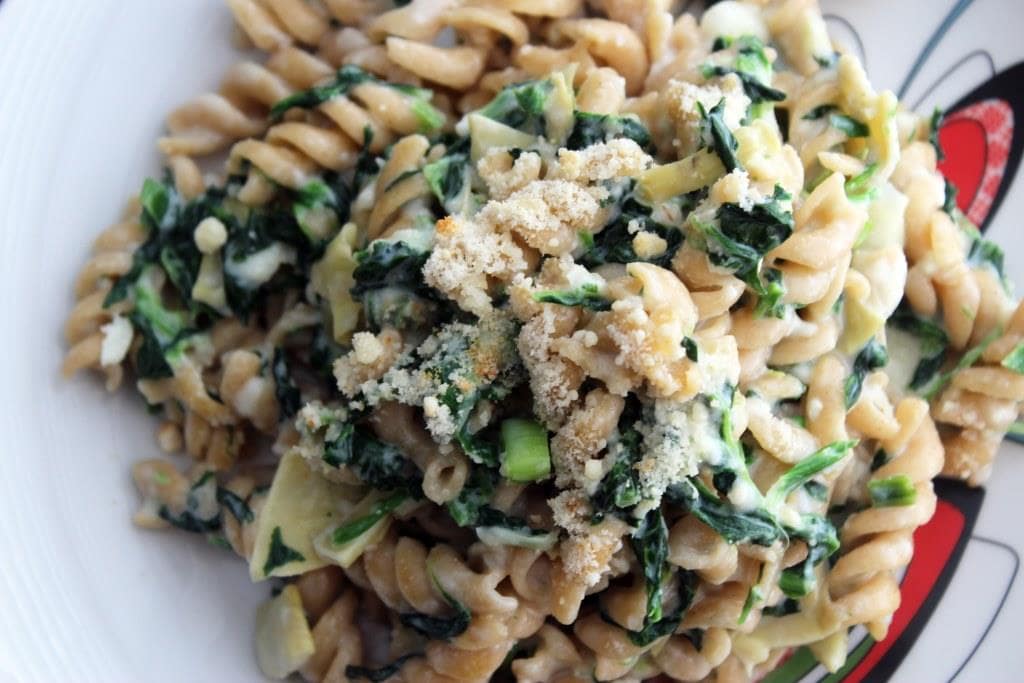 Enjoy this, friends!  It's REALLY delicious, tastes like spin-art dip, but is somehow miraculously not terribly unhealthy.  I love the nutty wheat pasta with the spinach - the earthy flavors together are really nice. 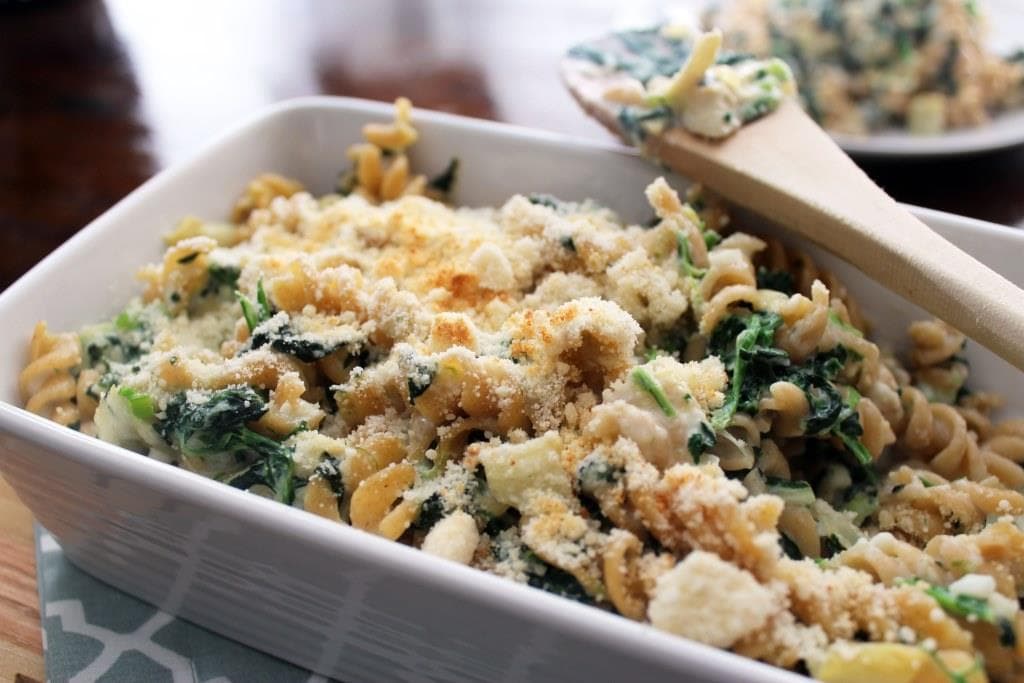 Shared at Weekend Potluck!
« The Content of Their Character
Refried Bean Hummus {vegan} »