12 weeks! We made it through the 4th trimester. 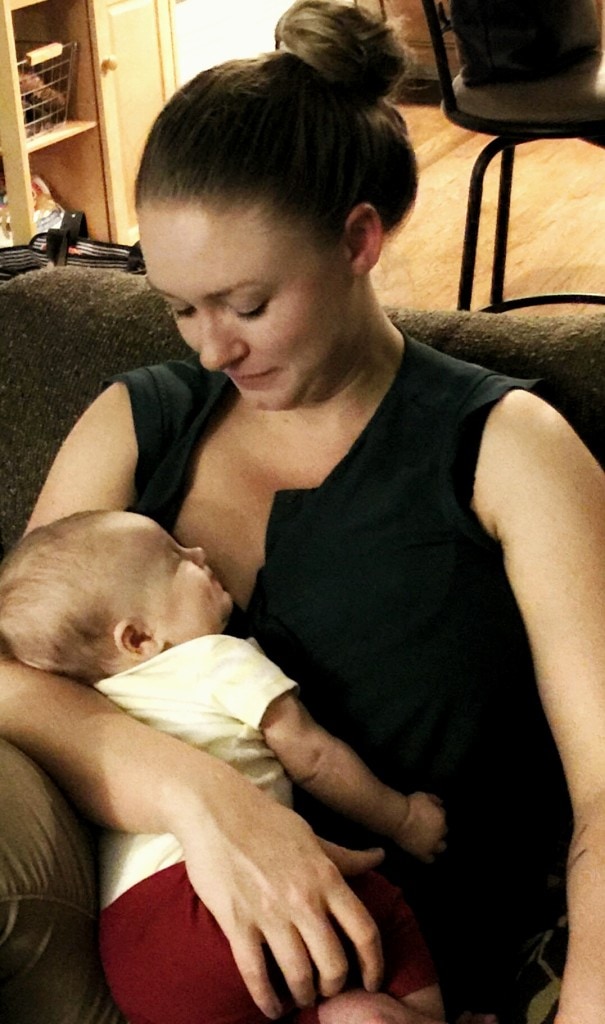 Things are ok. All things considered, we're so lucky, but Jay and I have both been struggling the past few weeks with what having a family in this culture really looks like, and how we might be able to change our future to create the life we want for ourselves and Beck.

Basically, we both hate being away from her, and neither of us are terribly passionate about our work. I love counseling, but my current job involves a ton of paperwork, not much pay, and an administration that is happy to threaten my job, move me around the hospital, and basically not give a hoot about my well-being as long as their boxes are getting checked off. It's not a terribly inspiring way to spend time away from your newborn. Jay's in the same boat, maybe more so because it's somehow so culturally unacceptable to be sad about leaving your child as a man, and WHAT IS THAT EVEN ABOUT?

But then also bills have to be paid and insurance has to be had and so we just...keep doing our jobs. Bless Jay's heart, he's much more of a provider than I, and I try my darndest to keep up with my few little jobs and taking care of Beck extra. It's not a competition, but we try to keep things as even as possible in terms of taking care of our family.

Because I'm not working 5 days a week we've decided that we're going to try and keep Beck out of daycare for the time being.  Daycare would eat up more than 50% of what I make, and our mothers are really really wonderful and take care of Beck while I work.  My sister and Jay's dad and stepmom watch Beck too so we can go on outings, run errands, and exercise, and I have no words for how wonderful it is to have support around us, helping us not go crazy in the midst of what can only be described as craziness AND taking such good care of our baby in the process.  Family is great, and we have great ones.

We've made it through 5/7 of the music competitions, and OH HOW I WISH that job could be full time. I love it so much, Jay loves helping with it, Beck was a champ on our travel, and except for the weekend shows the work is from home. We've talked lots about cutting back to 1 salary or 2 lower salaries if we could somehow both work from home, but I'd basically have to switch careers since counseling is pretty front-facing, and Jay's job is in-office right now too. Music, though...I'd quit everything else in a hot minute if our company ever got big enough (and our boss crazy enough) for a full time opportunity with that organization.  It has been such a blast this year, and gets better every season that we do.

We've also talked about starting our own business, but we have the slight hiccup of having no actual business ideas or the time to plan anything. Or skills. Or money. So, we've tabled the business ownership idea for awhile.

One super positive thing that has come about recently is that Jay is allowed to work a few hours a week at home to offset all the extra travel he's added since Beck was born. This gives him a little extra time with her in the morning before he starts work (since he doesn't have to commute) and allows him to sometimes help me with driving her to the grandma-du-jour when I'm working too. It's a testament to how productive AND happy people can be with work-from home jobs - not necessarily everyone, but definitely some people. It's a nice new development to offset some of the confusion we've both been feeling and the conflict between working and being with Beck.

In terms of Doing The Things, we've not allowed ourselves to become too reclusive, which makes me proud.  I had a few weeks of serious agoraphobia because OMG WHAT IF I LEAVE THE HOUSE AND SHE CRIES AND THE LINES TAKE A LONG TIME AND PEOPLE WILL STARE AND AHHHHHH but I realized that you just can't live like that, and I think I was smart enough to realize that weird behaviors like not wanting to leave the house with the baby are NOT going to correct themselves.  So, out we went.  A lot.  Beck has been to many stores, the mall, lunch (Beck loves lunch), trivia, breweries (yes, multiple), to get gas, and any other normal places that people go in the course of a regular life.   Sometimes she cries, most times she doesn't, and it's all fine.  It's still something I work on - not being just anxious to leave in general, but every time I get my ass out of the house for something besides work I'm really happy about it, so I just remind myself that the end result is always worth it, and Beck gets lots of exposure to things and as a result can nap like a champ in lots of different places.

Physically, I think I'm finding a new normal? Or getting back to normalish?  I don't have any pain except for sometimes in my ligaments/abs where things are trying to go back to normal but decidedly aren't, yet. I do yoga once or twice per week and try to walk a few days a week, which is good but definitely not great compared to what I used to do. People are super quick to tell me to be easy on myself and I try, but the cultural obsession with bouncing back and the fact that every. single. female family member of mine is incredibly thin doesn't make that easy at all. I know full well that eating less and exercising more are the paths to ThinGreatness, but then also I like wine and chocolate so, there's that.

Recently, my hormones have been COMPLETELY out of whack. I'm all of a sudden much more tearful than I was while pregnant or since having the baby, so thaaaaat's been fun to deal with. I've been on this new birth control for over a month so I don't think that's it, but it's strange for me to feel this depressed and anxious, and I'm not quite sure what to blame it on. I've read that hormones can take a really long time to settle down after giving birth, so I'm letting this be on the scale of normal, but I'm also a thousand percent a believer in antidepressants, so I'll go that route in a heartbeat if I need to. I also have this hierarchy of needs theory - I'm a very survival-based person in that I don't get sick or freak out until AFTER things are handled, if that makes any sense. So, part of me thinks that my hormones just haven't been able to do their thing until now because before I was learning how not to kill my kid, and now that I'm feeling slightly more confident in parenting (emphasis on slightly) my hormones are like LET'S ADD DEPRESSION HAHAHAHA YOU SUCK AT EVERYTHING.

But let's get to the oversharing portion of postpartum healing, because that's way more fun than talking about depression. Queefs. Postpartum vag-farts are totally a thing. They've only happened to me in yoga so far, but omg hilarious and embarrassing and hard to control and loud all at once. Kill me now. The first time it happened was about 40 minutes into a class, and now I can make it about 60 minutes without my pelvic floor just completely giving up, so it's definitely a strength issue in which the muscles in my pelvic floor just can't keep it together quite literally. Kegels, people. Do them. Embrace the benefits of not having your vagina make super loud noises in super quiet situations.  I've tried to go a little harder each time I do any kind of exercise (only walking or yoga for me, because I just don't like anything else), and it feels better and better as I move through the weeks.  The vag noises have died down too, so maybe that isn't a lasting childbirth side effect.  Jay has a lot of jokes about this that involve comparisons to wind socks.

Also, stretch marks! I got none while I was pregnant and now have a lot. On my stomach, hips, and breasts. So....all the places that got bigger. Stretch marks form under the skin when it stretches or grows too quickly, blah blah blah, but I wasn't expecting them to show up later. They don't actually bother me at all, but they're currently BRIGHT pink and short - the longest one I have is maybe an inch long so I'm wondering if they'll keep growing? It's definitely an important note that at your biggest in pregnancy all of the symptoms of being big aren't there yet - strange, huh?

Besides all of the silliness with work and hormones and non-bouncing-back bodies, Beck is turning into such a joy.  Not that she ever wasn't, but the first 8 weeks or so are really cry-sleep-eat-repeat, so it's not what I'd call the most exciting part of development.  Now, though, she's giggly and smiley and wiggly and it's just EXCELLENT to watch.  Her current obsessions are lights, ceiling fans, and this annoying stuffed giraffe that plays music and nods at her, and she. loves. it.  Stares and coos and it's just the absolute cutest.  She also really loves lying on her changing table, which I've heard is a thing?  We have some friends that pull their changing pad into the living room and their kid just lies on it like it's a damn pool raft, who the hell knows what's up with these kids.

This is just the weirdest and best time, guys.  I don't even know.  Let's recap:  work stinks, so help me find a new job.  Culture is shitty in that it makes me feel fat all the time and also guilty about everything at every turn.  Hormones blow.  Vaginas are loud.  Stretch marks are real.  Babies are adorable.