It's another Thanksgiving dish! 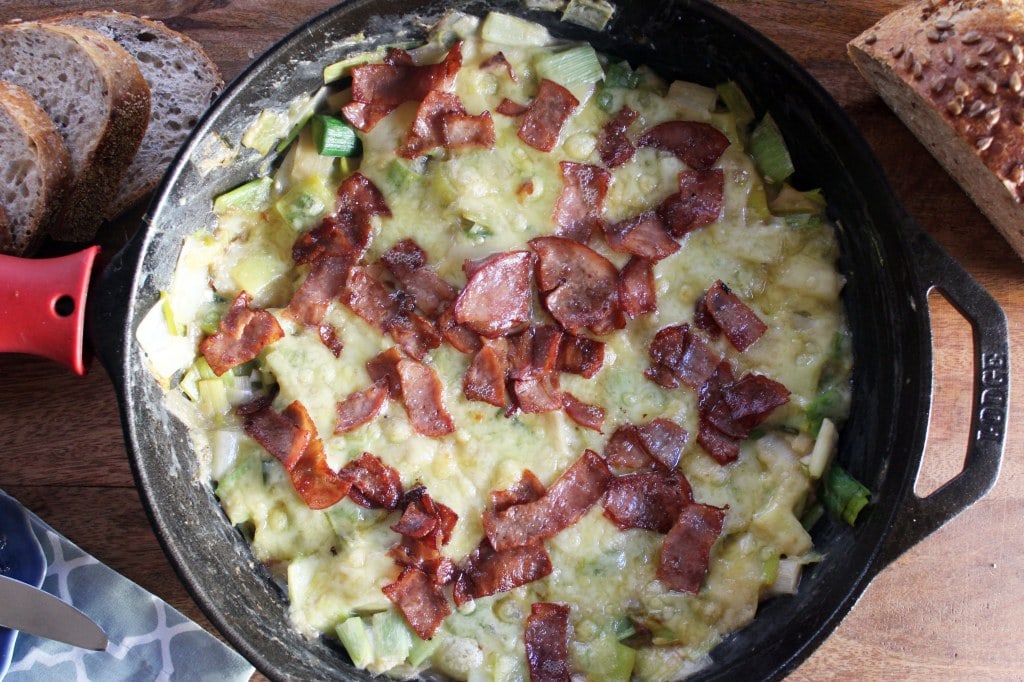 I actually can't decide what it is, if we're being honest.  A gratin is kind of a creamy baked thing, so I'm starting there.  But, this also kind of can be treated like queso, so then it would be an appetizer?

This is modeled after a French casserole my parents used to make:  whole leeks wrapped in thin ham and covered with white sauce and somehow potatoes were involved too?  I don't remember it very well, I was six.  I mainly remember that I really liked the ham but that cutting the leeks was hard, which is still true today - whole leeks are kind of a card that need to be dealt with.  Their flavor is great, but they can get a little stringy if you don't cut them nicely, ya know?

So we slice them into little half moons and cover them in cheese and garlic and ham and call it a gratin.

This makes enough for about 6 servings, since the leeks cook way down.  BUT, we're involving cheese and butter here, so a smallish serving is plenty.  You need leeks!  These are trimmed already, but you'll just want to ditch the dark green tops if you get whole leeks.  Then we have some really thin ham, white wine, half and half, butter, garlic, flour, and swiss.  The wine and garlic together are especially sexy. 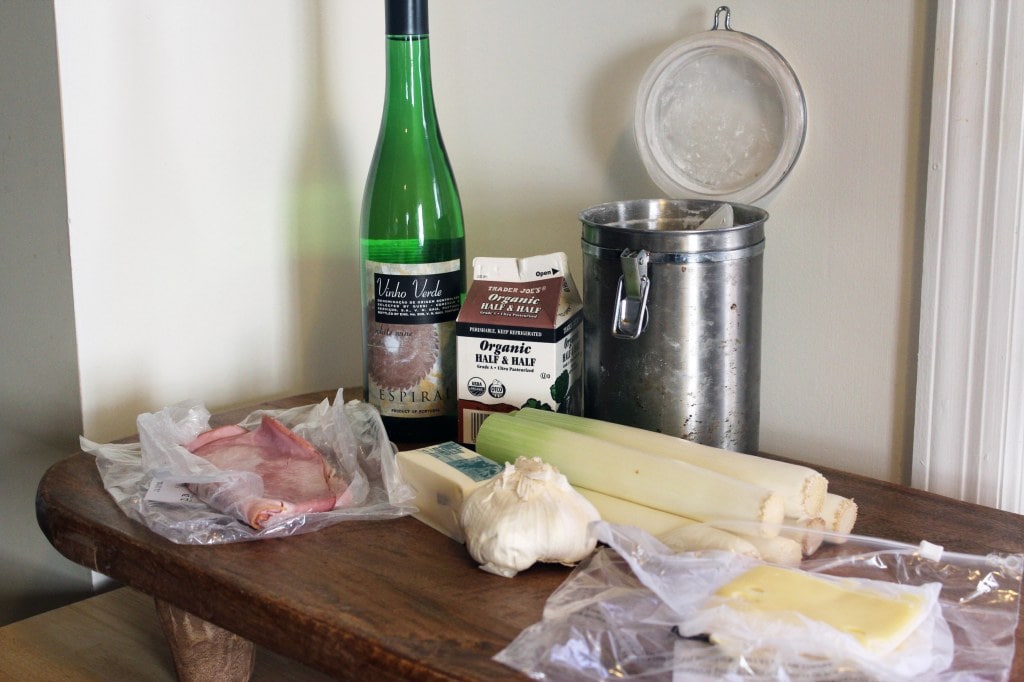 Since leeks grow up from the ground, then tend to get sand in between each of their layers, and gritty food isn't good.  So to clean them, we cut off the tops and bottoms, cut the leek in half lenthwise, then slice it into little half moon shapes. 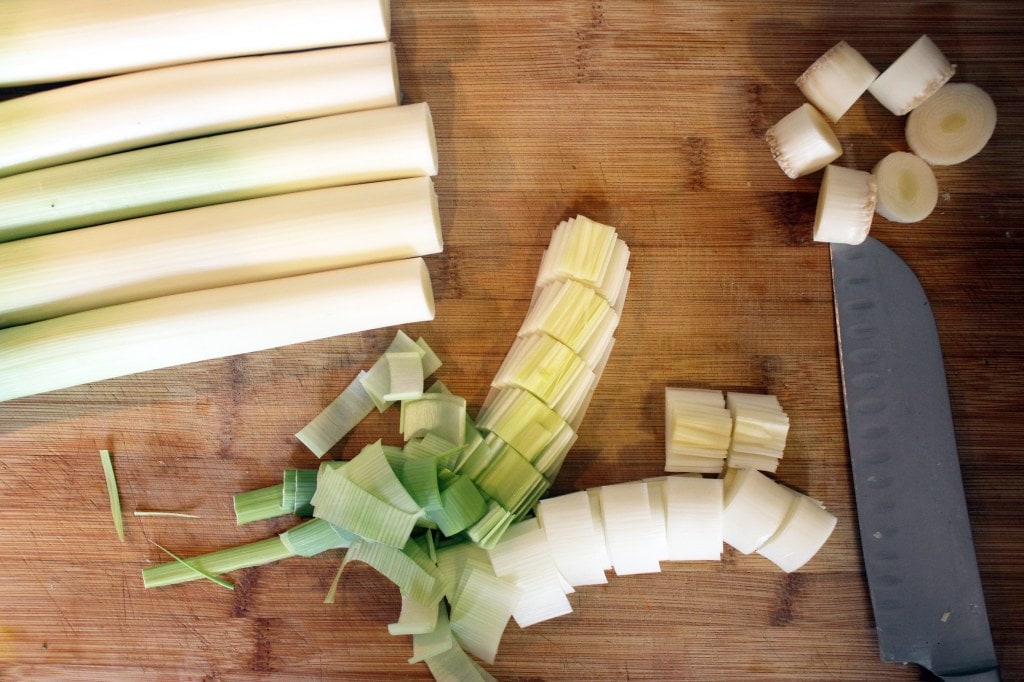 Put all the leeks into a bowl with some cold water, then just let them sit.  Any dirt will settle to the bottom of the water and the leeks will be cleaned! 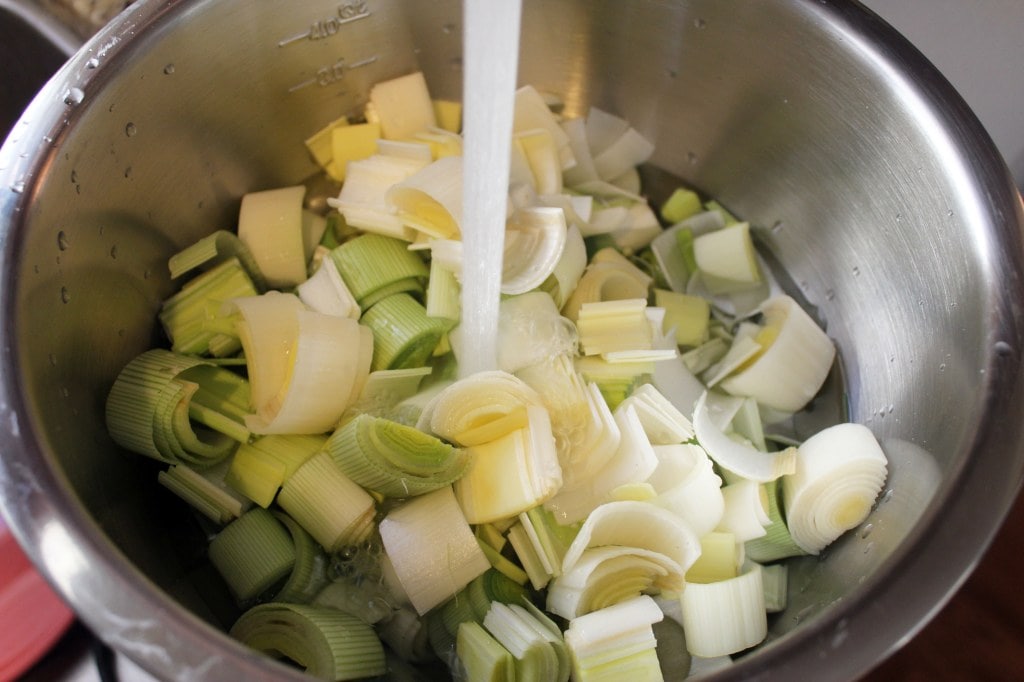 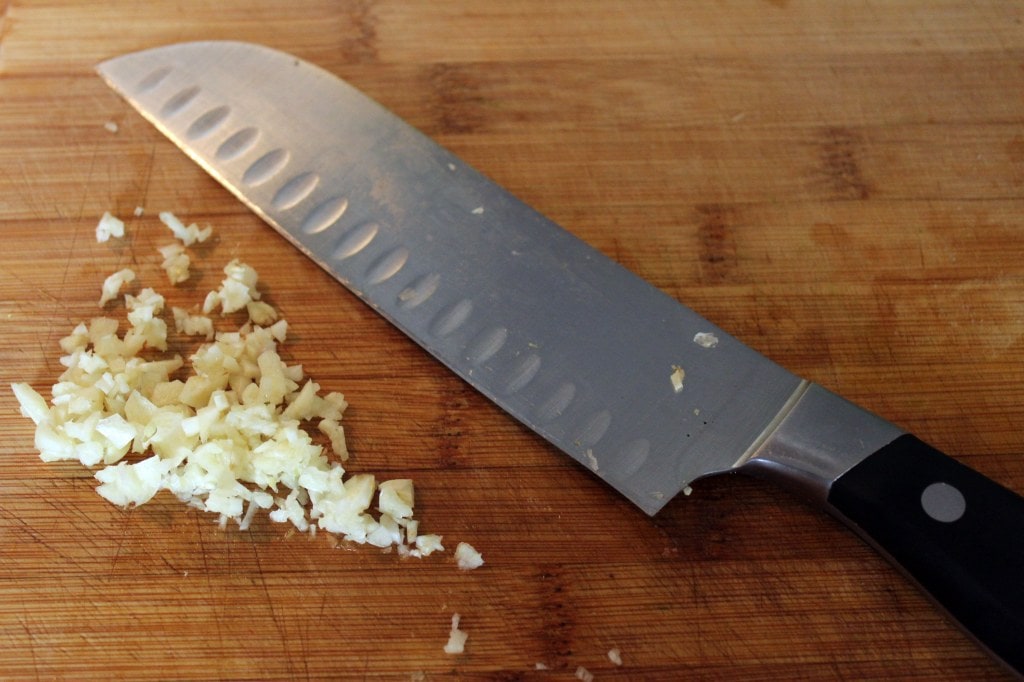 Now, for the ham!  Any ham you like, just cut it into bite-sized pieces.  Preheat a large ovenproof skillet to medium-high heat, too.

Add the ham to the skillet with half the butter, then we just let it crisp up. 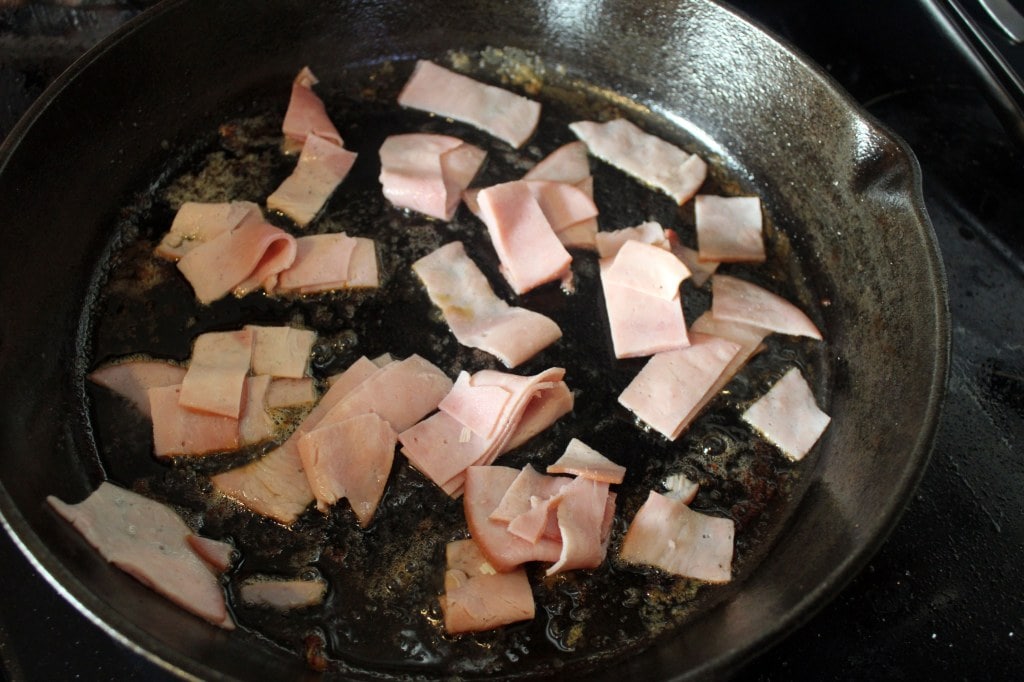 5 minutes or so, flipping it around every once in awhile. 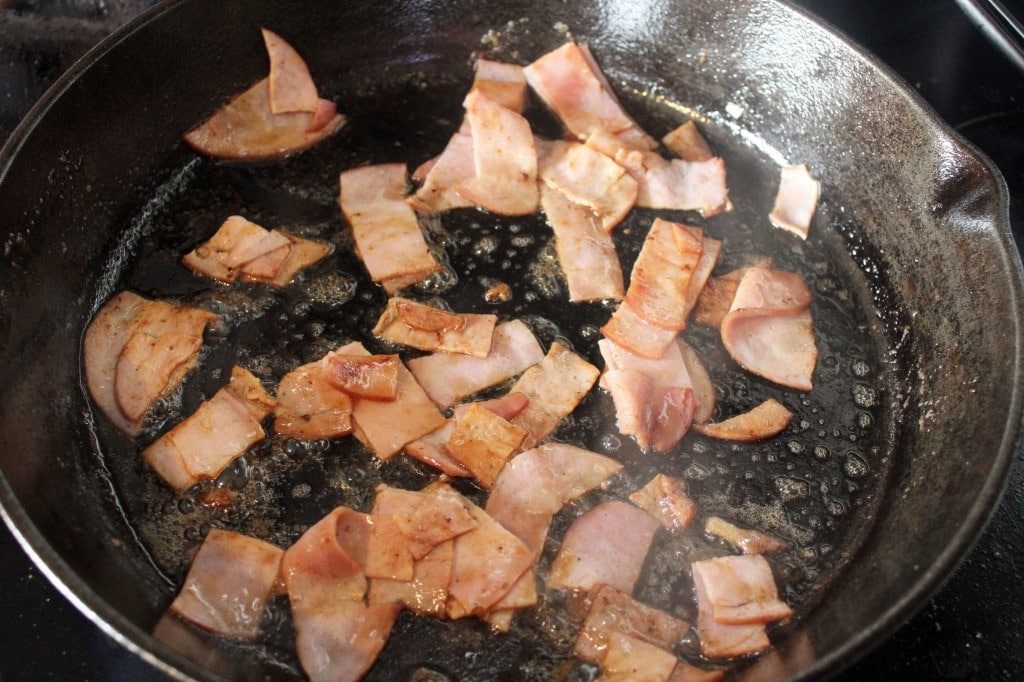 Then, take the ham out of the skillet and set it on a plate! 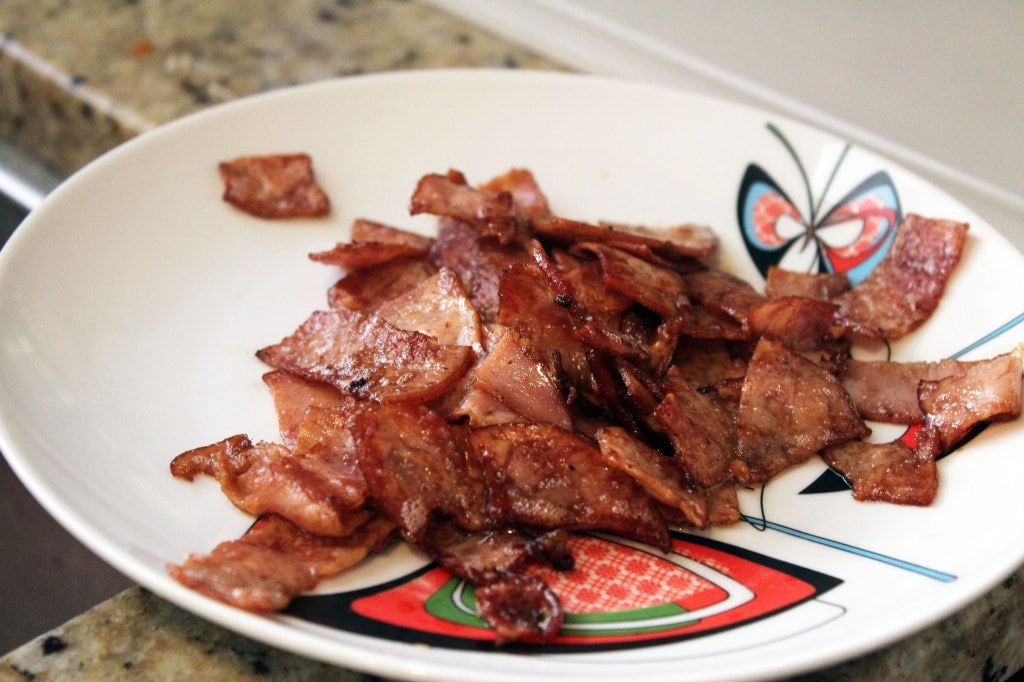 Now, add the leeks to the same skillet and stir them around for about 5 minutes. 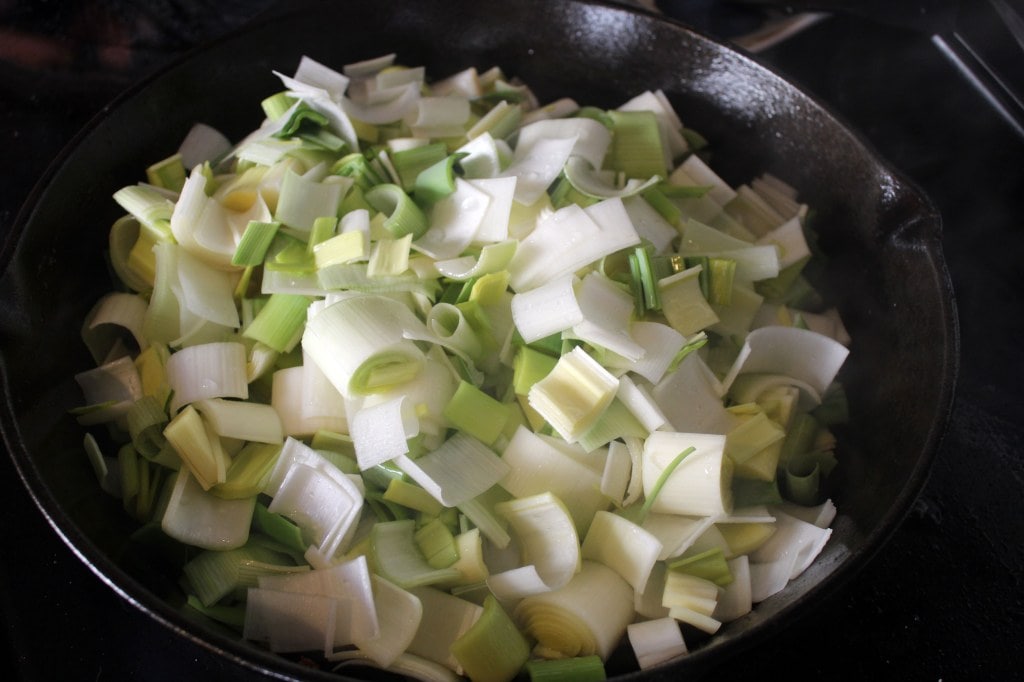 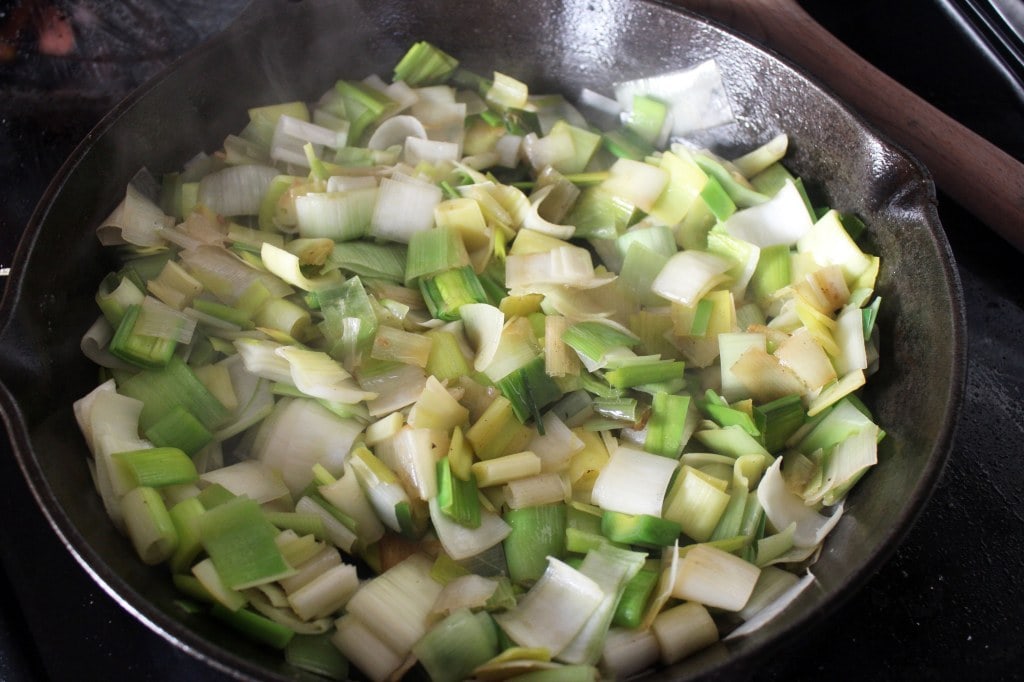 Add the rest of the butter and the garlic to the center of the skillet to let the garlic cook for just a minute or two.  Then, sprinkle the whole skillet with the flour! 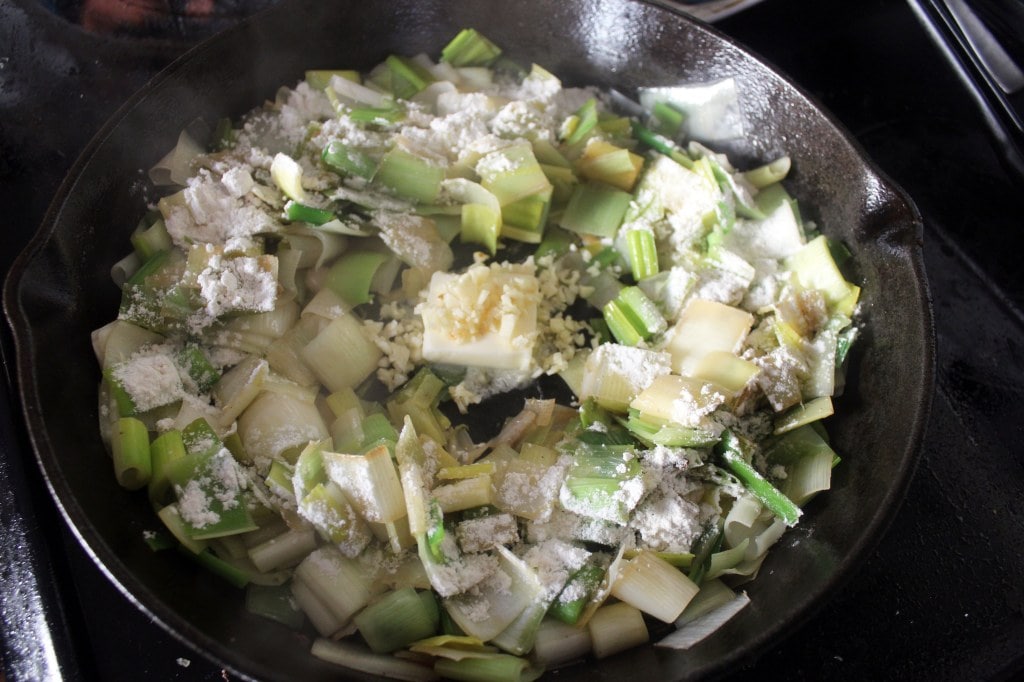 Stir the flour and butter into the leeks - it'll get a little bit sticky, but we'll fix that in a minute. 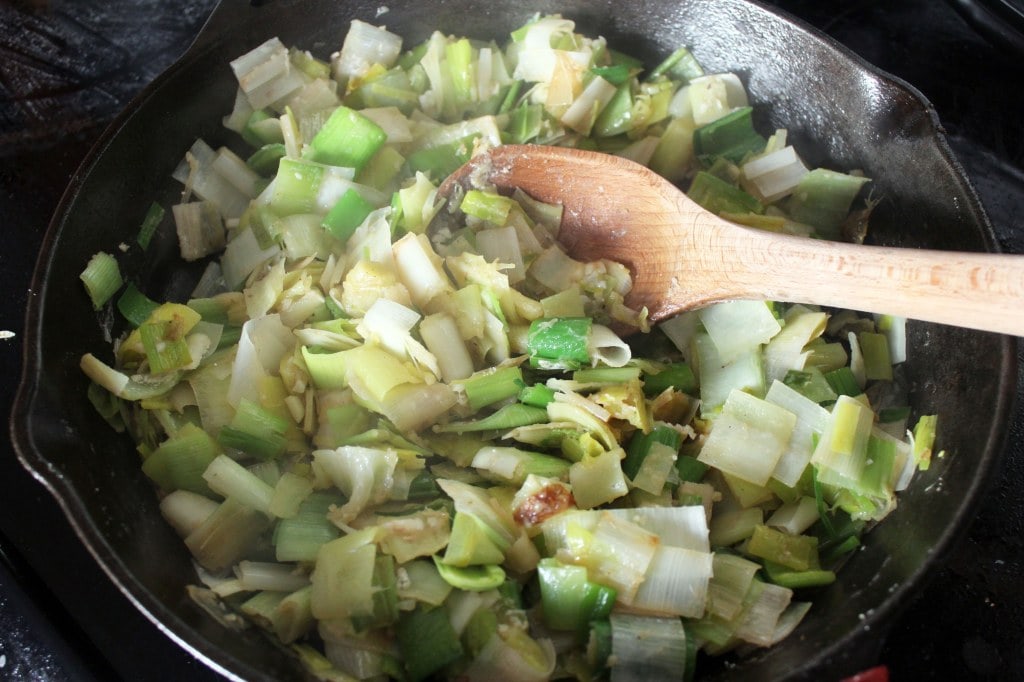 Now, keep stirring while you pour in the wine... 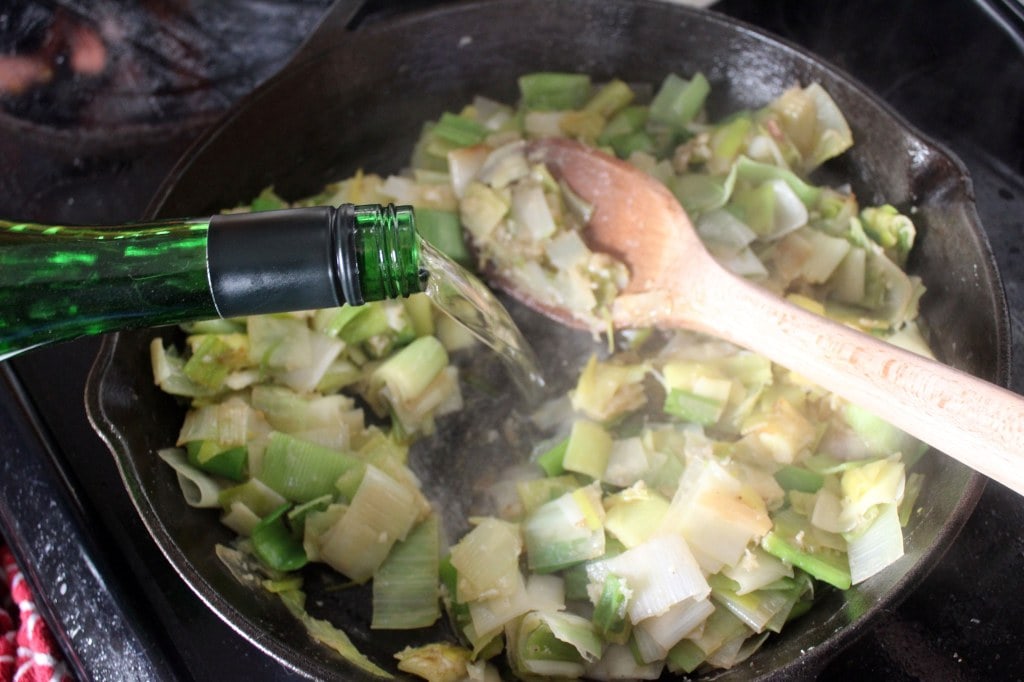 ...and when the wine has almost reduced pour in the half and half, then turn the heat off the skillet. 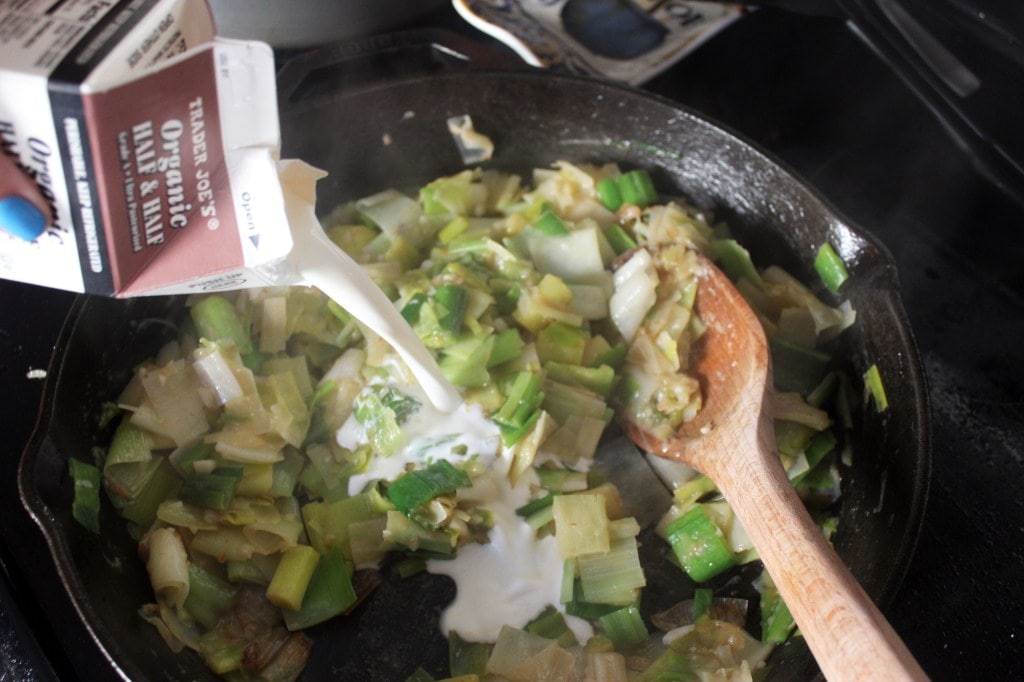 Yum!  I like this just the way it is.  Taste the leeks and see if you'd like to add any salt or pepper, then kind of mush them all into once nice layer. 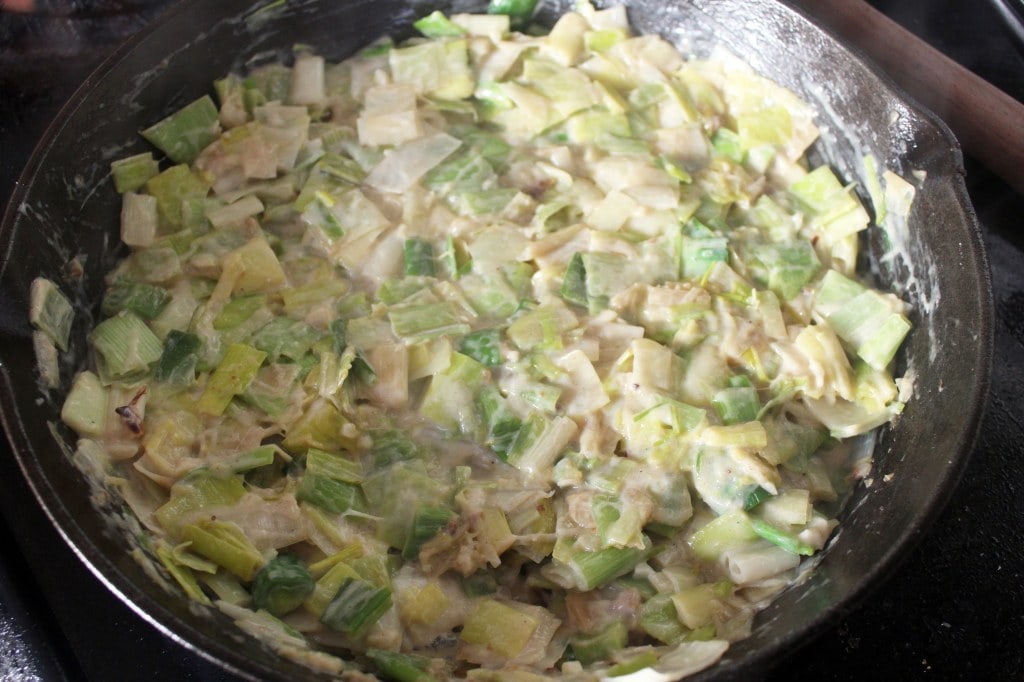 THEN add the cheese on top. 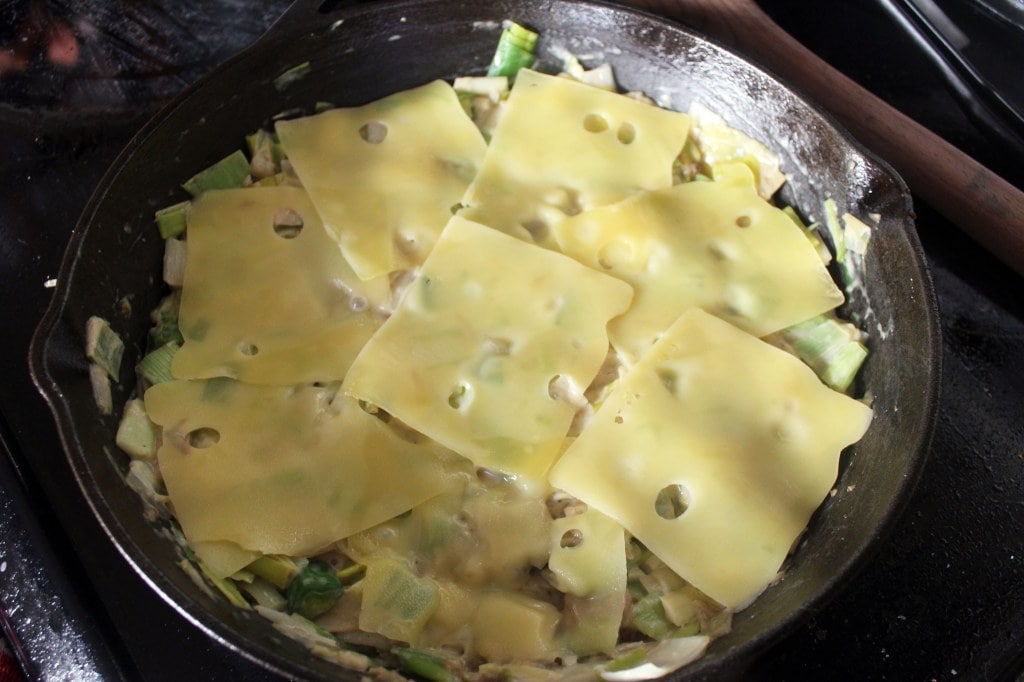 And the ham that we already crisped a bit. 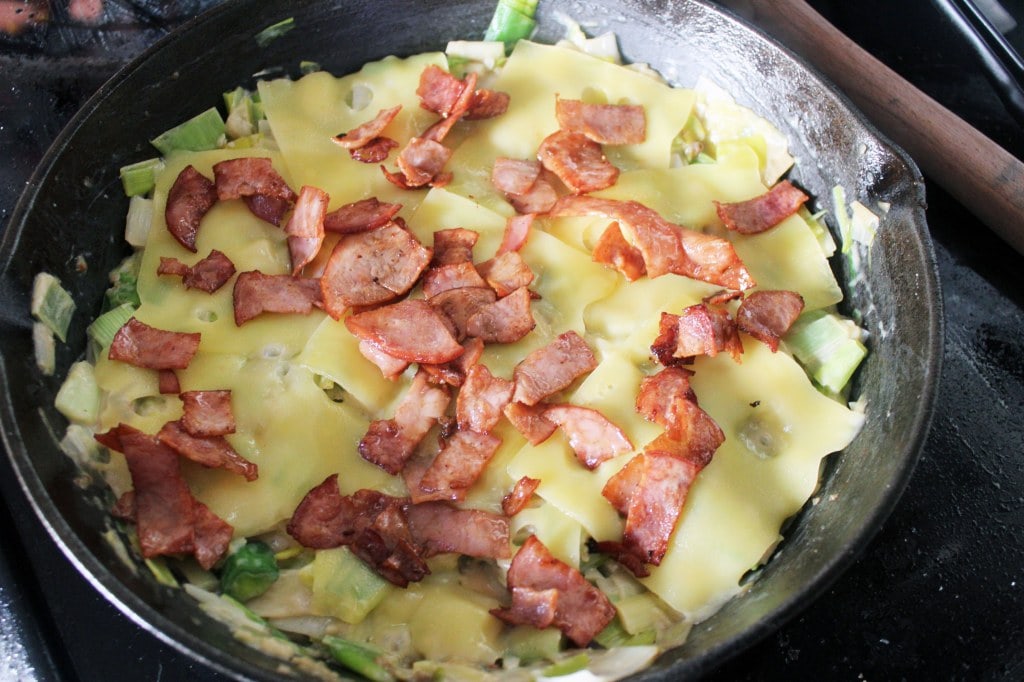 Now, stick this whole mess under the broiler for just a few minutes until the cheese bubbles. 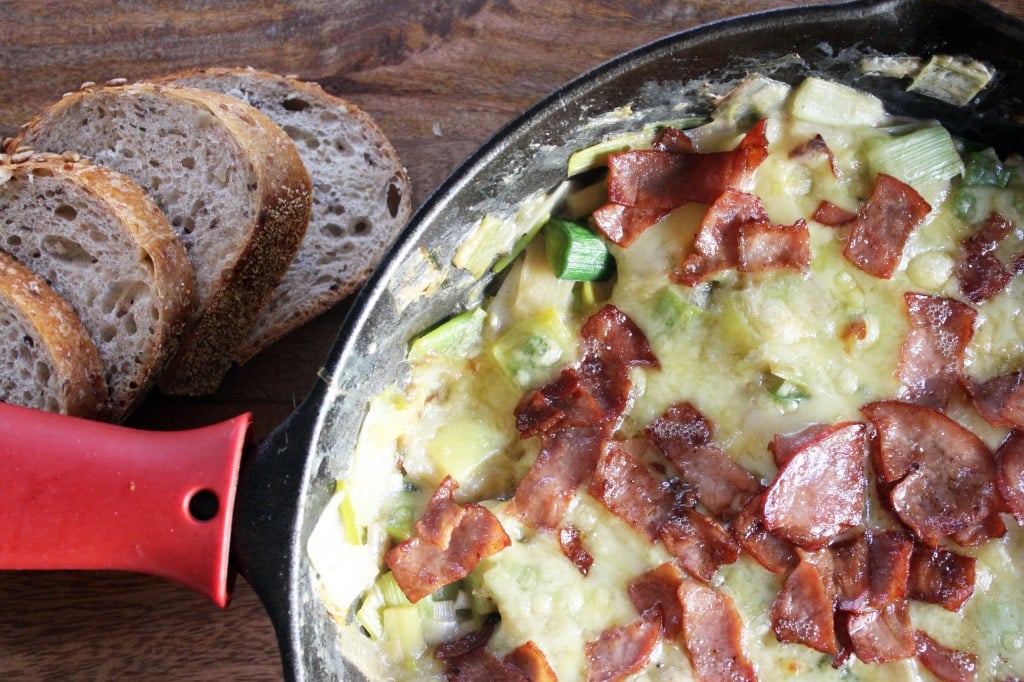 I don't even care what you call it, whether you eat it for breakfast, lunch, dinner, or WHATEVER.  This is delicious.  Make it next week.  Put turkey next to it. 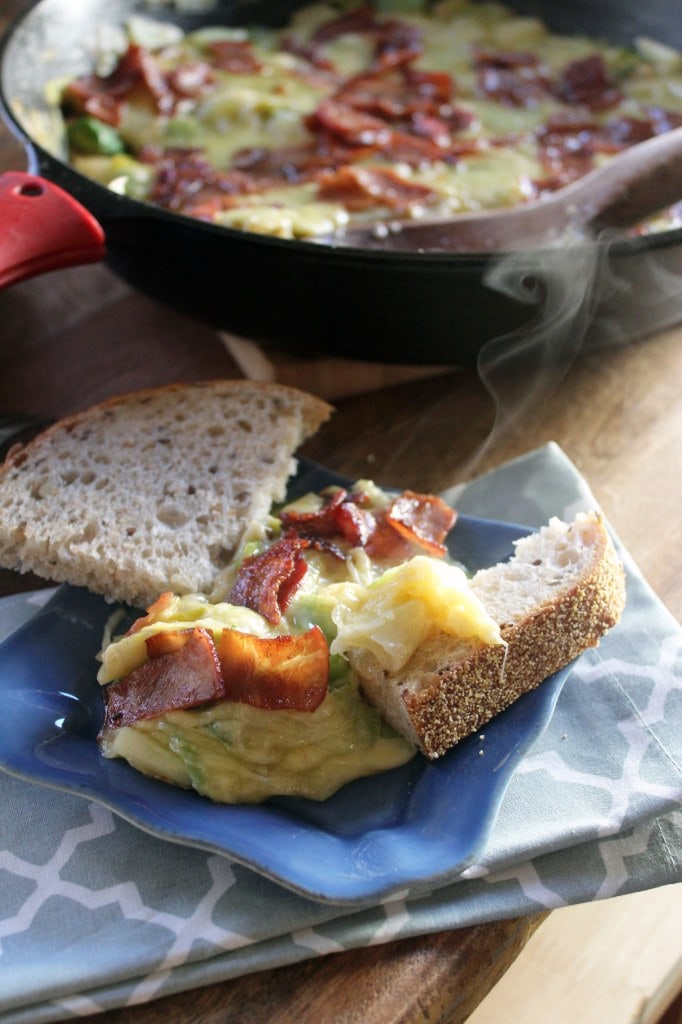 Thank you, childhood in France, for letting me like leeks as a 6 year old.