Well.  After 19 weeks we've got quite a little list going of all the things that are surprising to Jay about pregnancy and impending parenthood, but mostly he just comes up with the most ridiculous things to say.  I would also like you to know that the following picture was taken on the exam table at our very first midwife visit with his legs in the air as if there were stirrups, which there weren't. 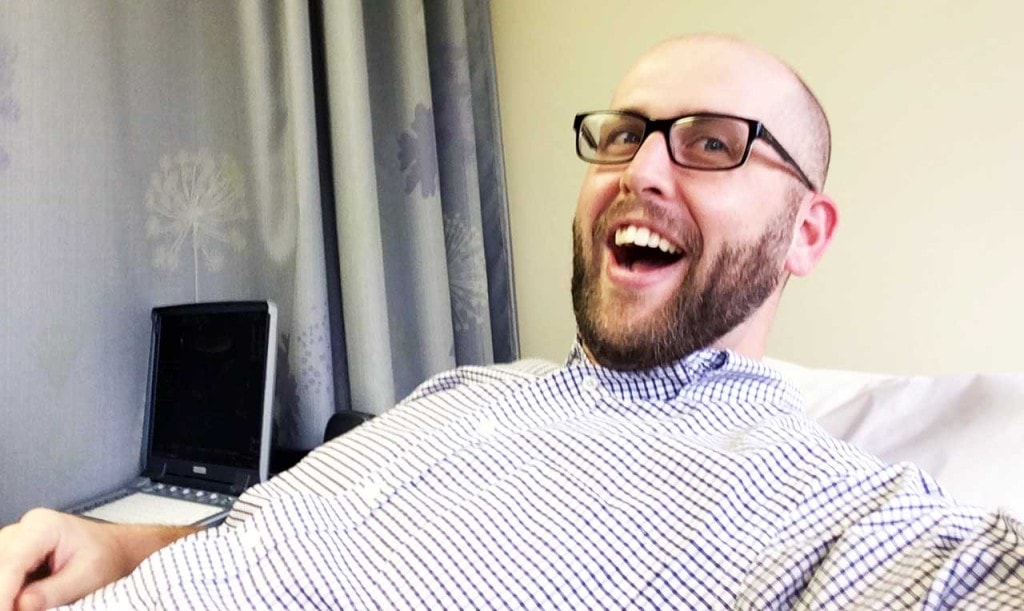 When I got to around 13 weeks and we started telling people we had to go through the list of places where I work, and one of them was the yoga studio where I work and Jay practices several times a week.  We only "told" one or two people, but of course those people would talk to Jay or me and people would overhear and every class we attended for the first few weeks felt like we were "telling" new people.  When my friend Julia heard she looked at Jay with what can only be described as disgust and just said

Now, if you know Julia you know that she's really quiet, amazingly fit and can stand on her head all the live-long day if asked to, and generally says hi and bye to and from class.  She's very nice, but doesn't chat a ton.  For some reason, her reaction was hilarious to me.

Then, we have the first time Jay saw a picture of a topless new mother holding her naked baby and was all "where are her clothes?" and I was all "contact with skin," and then the very next night baldy decided that he needed to have his head massaged otherwise he COULD NOT SLEEP, and presented me with this:

Just rub my head. Skin to skin is important! It was all over that doctors office wall. It helps sync up the heart beats like when you get a new watch.

One night my preggo sense of smell was on FIRE, and homeboy just stunk.  Not necessarily because of my overachieving nose, but more because sometimes he sleeps late and doesn't exactly shower every day.  So, I suggested he clean himself before bed.

Stop saying I don't shower! I'm going to be a dad, I can't say that kind of stuff anymore!

Those things are getting big. Is it time to start rubbing baby powder on them? Coconut gravy?

After a particularly fun appointment:

No, I wasn't excited to hear the heart beat! Do you know how queer it is to be a good dad? Actually that's true, they are excellent parents.

And, one glorious time when I suggested that maybe two full lunches with beer and chips wasn't necessary for anyone.

Well, I didn't want to say anything,  but you're the one that has been getting a gut.

So there you have it.  The father of my child.  And of my giggles, if that is a thing?  There's more, I promise.