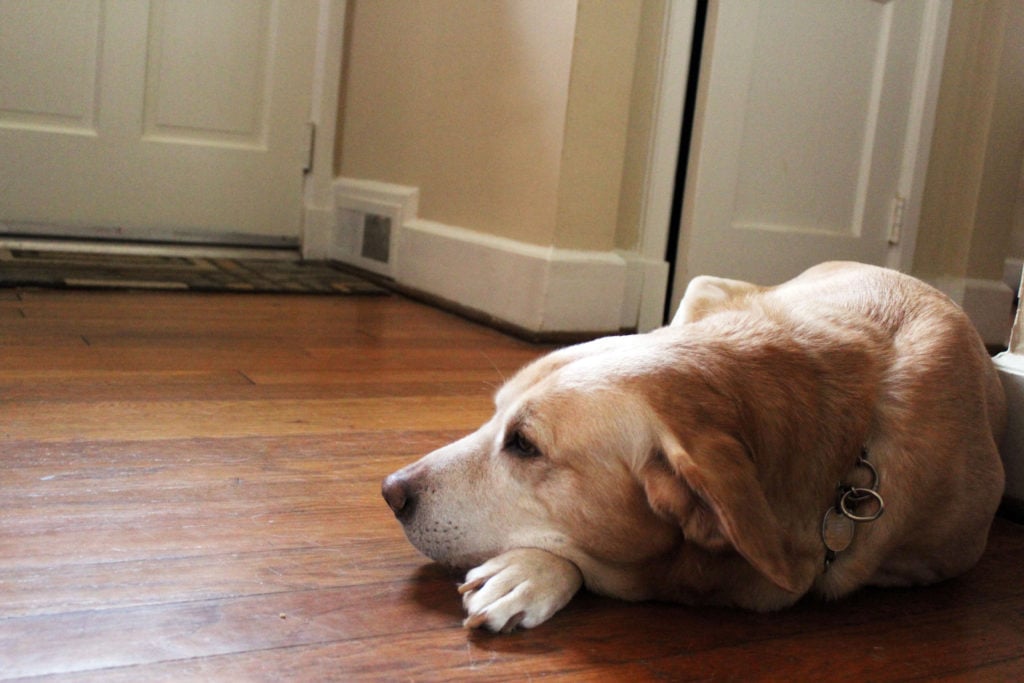 Actually, we don't know how old he was.  Jay adopted him as an adult dog.  Rescued him, really, and of course Jake rescued Jay right back.  It wasn't a traditional rescue through a service that was tidy (that wouldn't have been nearly as interesting).  Jake's original owner left him with a friend, full stop, with no forwarding information, and he was tied up in said friend's back yard.  Jay's mom got a tip from an ASPCA friend, and Jay literally went to get him from this person's yard without them there.  He unchained Jake, who ran toward him, and Jay said "wanna go for a ride?" and the rest was history.

I think that phrase, being the first one ever exchanged between the two, made Friday especially hard for my husband.  He has had Jake for nearly all of this portion of his life - coming back to SC after pursuing comedy, finishing his degree, marriage + house + baby, the grown up stuff.  Jake was with him through it all, very steadfast and so loyal.

If you've been reading for any length of time, you might remember that Jake has tried to die on us twice before.  Once during the Super Bowl, once when we were in NYC with Beck, who was 5 months old at the time.  Timing was not Jake's forte.  Those two illnesses were related to bloat, where a dog's intestinal track gets twisty and or blocked and their stomach fills up with air.  Sometimes it flips, requiring surgery, sometimes it doesn't.  Jake's belly corrected on it's own, but not without much worry and medicine and expense.

That, ultimately, wasn't how things ended for Jake.  Since the last time he got super sick, he experienced a general slowing down.  Lots of arthritis, and last week he stopped using one leg completely.  That would have been fine on a younger dog (our vet told us that his oncology professor in vet school said "dogs have 3 legs and a spare"), but Jake's 3 remaining legs were too weak to hold him up, so he had this sad hopping and slipping that was happening.  For a few weeks prior he'd been falling a lot, especially when he went outside to the bathroom, and we were fearful that he'd have a really bad accident and he'd have to die in a lot of pain and very quickly.  So, with much conversation and crying and contemplation, we decided that not being able to walk or even stand and decreased appetite was our threshold for when lack of quality of life called for us to step in and help Jake.

We made the appointment the night before, once we had decided, and THAT was strange.  Jay described it as being like death row but with normal life.  I had a work thing that night, and I brought home cheeseburgers for the dogs.  Jay still had to put Beck to bed and clean up the kitchen.  We had a house showing the next morning, during the actual main event, so Jay took Beck to my mom's house and I cleaned up the house in the way that I do multiple times per week, only with a pit in my stomach and Jake hopping around the house after me.  I tidied so slowly and methodically, because I couldn't sit down or think about anything else without feeling too many feelings all at once.

It was awful but right.  Our vet was wonderful helping us make the decision and in the moment, and Jake will be returned to us today or tomorrow after cremation.  When we move we'll plant a tree with him so he'll feel useful and involved.

It is a new kind of adulting, deciding big things like this.  Jay grew up with dogs but of course his parents handled the hard things, and we never had pets since we moved so much.  It was also strange, of course, to go to the vet with an animal and leave without one, and then go back to regular life.  Jay had a work event that day that he couldn't get out of, and I prepped food for a family event on Saturday.  Grief and loss is strange in that way, the loss occurs but life goes on.  Our society is interesting that way, but my feelings on bereavement are too complex for this particular post.

I have this whole list in my mind of funny Jake moments through the years (I got 6 years with him), but mostly we miss his quiet presence around here.  Even when he was in pain he was a wonderful vacuum, eating everything from raw onion to apple and pear cores.  He didn't like banana peels, and that honestly surprised us because the guy would eat anything.  He was gentle with Beck, excited when anyone came home after a long day, and thrilled to be offered walks or rides.  He was hopelessly optimistic about his ability to catch squirrels, and drooled incessantly waiting to lick our plates after dinner.  Yes, I know that is gross and I don't care.

Mostly, the loss is strange to me, rather than an overt sadness.  Because he was sick for so long I'm very comfortable in our decision, and he was so peaceful when we left him - he looked more like a puppy than he has in months because he's had such a hard time getting comfortable.  It's weird, though, to reference Callie instead of "the dogs." Beck is used to listing the members of our family while pointing, and the last few days has had such a confused expression when she says Jake's name in her list.

It's quieter here - all of us are a little bit subdued, including Callie.  She's gotten extra walks and snacks but doesn't seem to know her place without an alpha dog - she was used to following Jake around everywhere.  Jay misses having another guy around to talk to, so we tell funny stories or focus on the baby to somehow deflect our sadness.

Thank you for your calls and texts this weekend - we appreciated your words so very much and love how much you loved Jake with us.