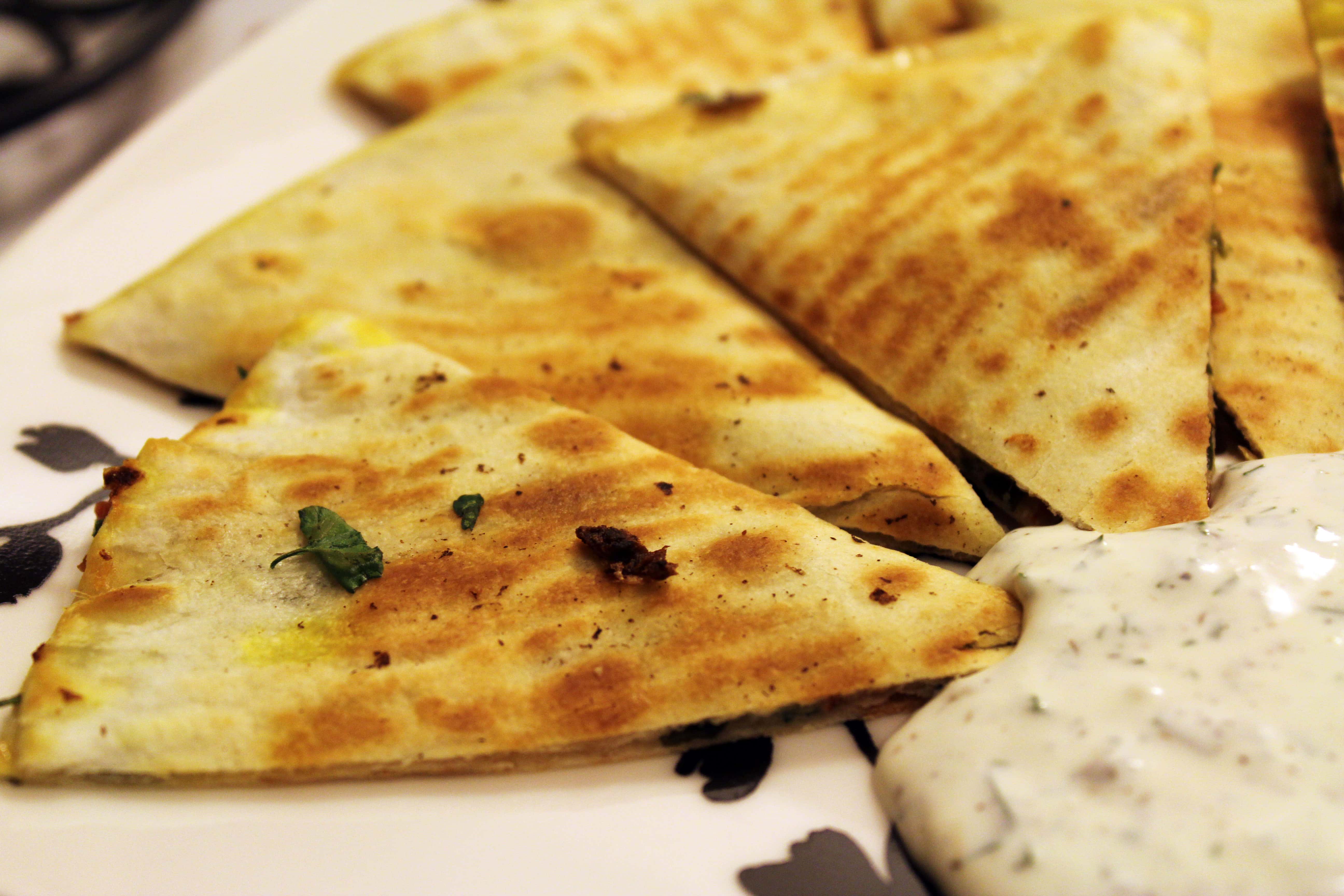 These are good, people.  These are VERY good.

This isn't a recipe, it's an idea:  make quesadillas all the time, and make 'em with lots of different ingredients.

They don't have to always be Mexican, people!

Although, quesadillas with Mexican flavors are incredibly wonderful and delicious and I love them with a fiery passion.

I made this for myself last week when Jay abandoned me to be with people that he likes better.

And by that I mean, he had dinner with his father and I watched American Idol for 5 hours.

On this particular night, I used the following ingredients for my quesadilla:

That's it!  You could use any herbs, combination of cheeses, spices, pickles - the sky's the limit!

I made a sauce too:  it went like this.

I mixed the sauce ingredients first so they could have a minute to marry and make babies. 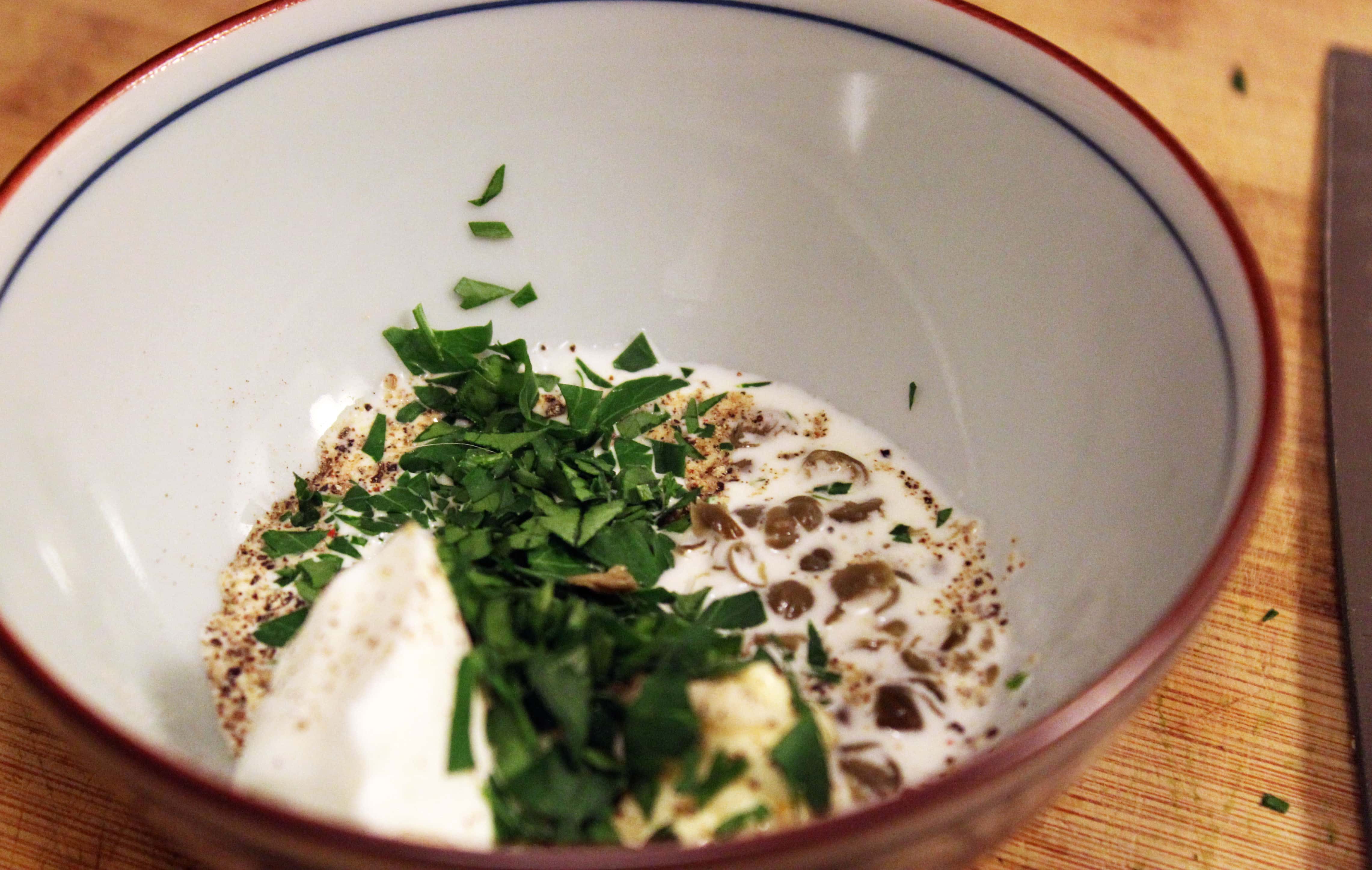 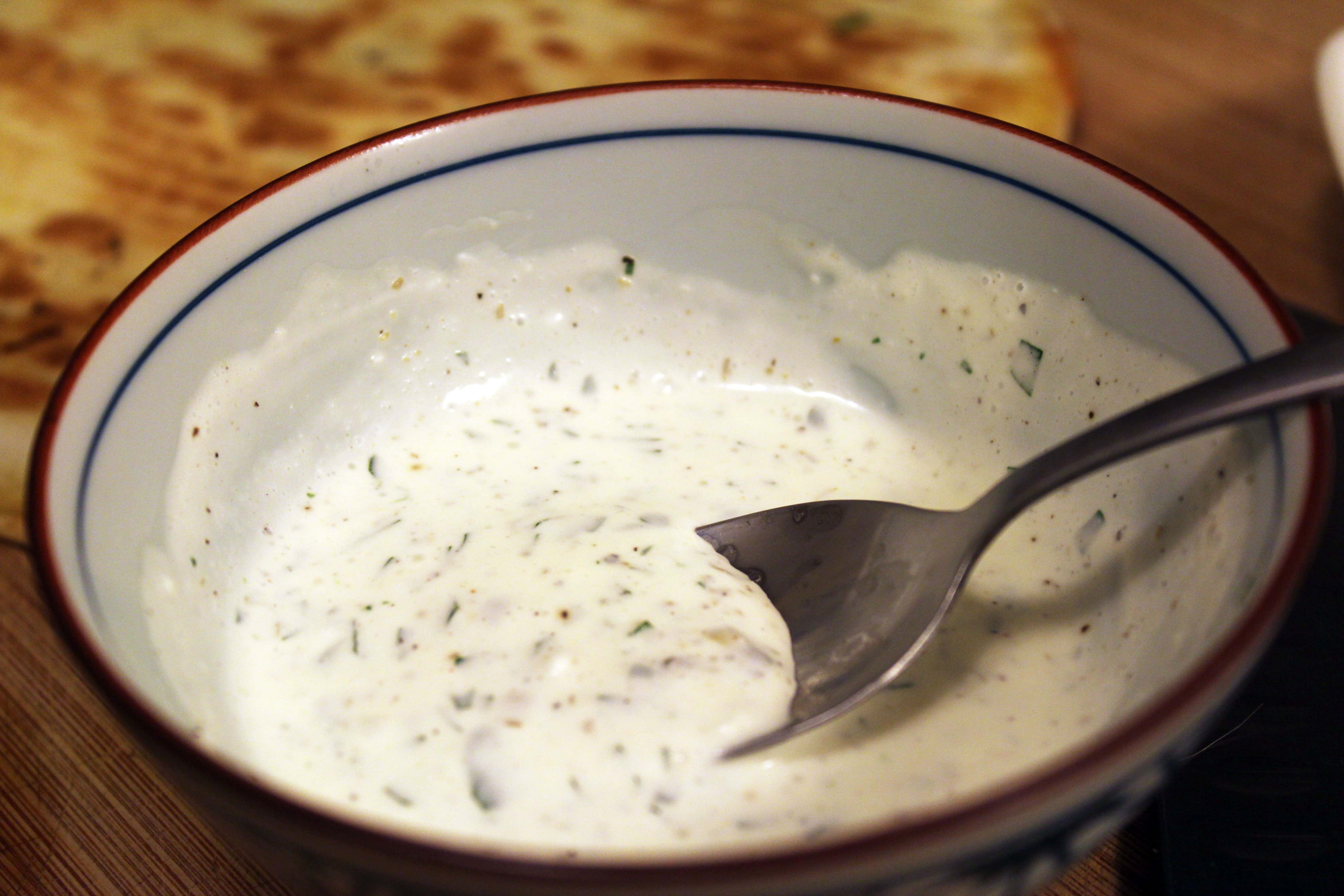 Now, I was very hungry so I used two tortillas for my quesadilla, but one folded in half would have realistically been plenty of calories.

Plenty just is never though, though, huh?

However many tortillas you use, heat a pan to medium.  I like to put the tortilla in the cold pan so that as it heats the cheese slowly melts.  If you throw the cold tortilla and cheese in a hot pan the outside will burn before the cheese melts, and that's just a waste of cheese.

So.  Cold pan, tortilla with olive oil or cooking spray, then a light layer of grated cheese and whatever toppings (fillings) you're using. 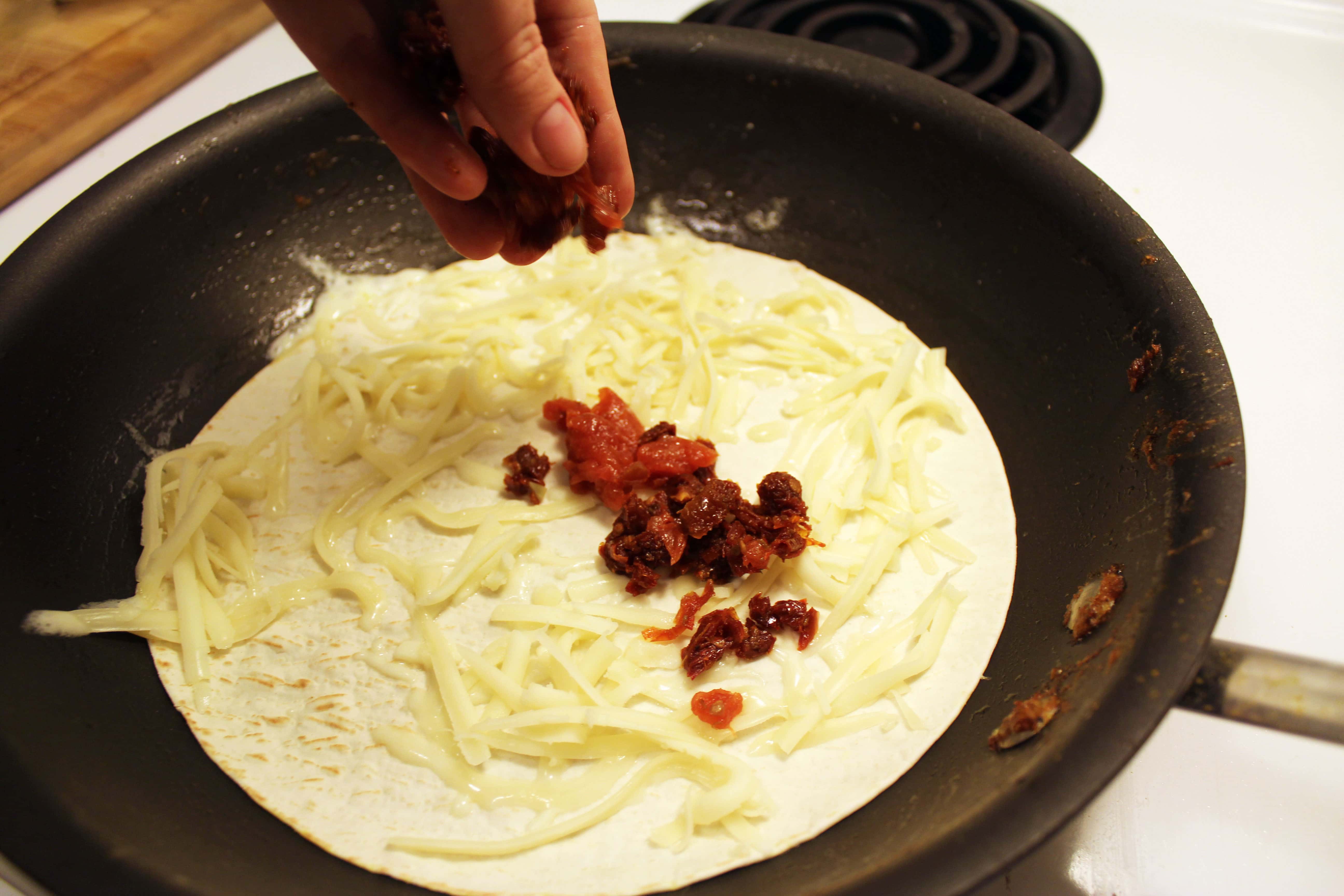 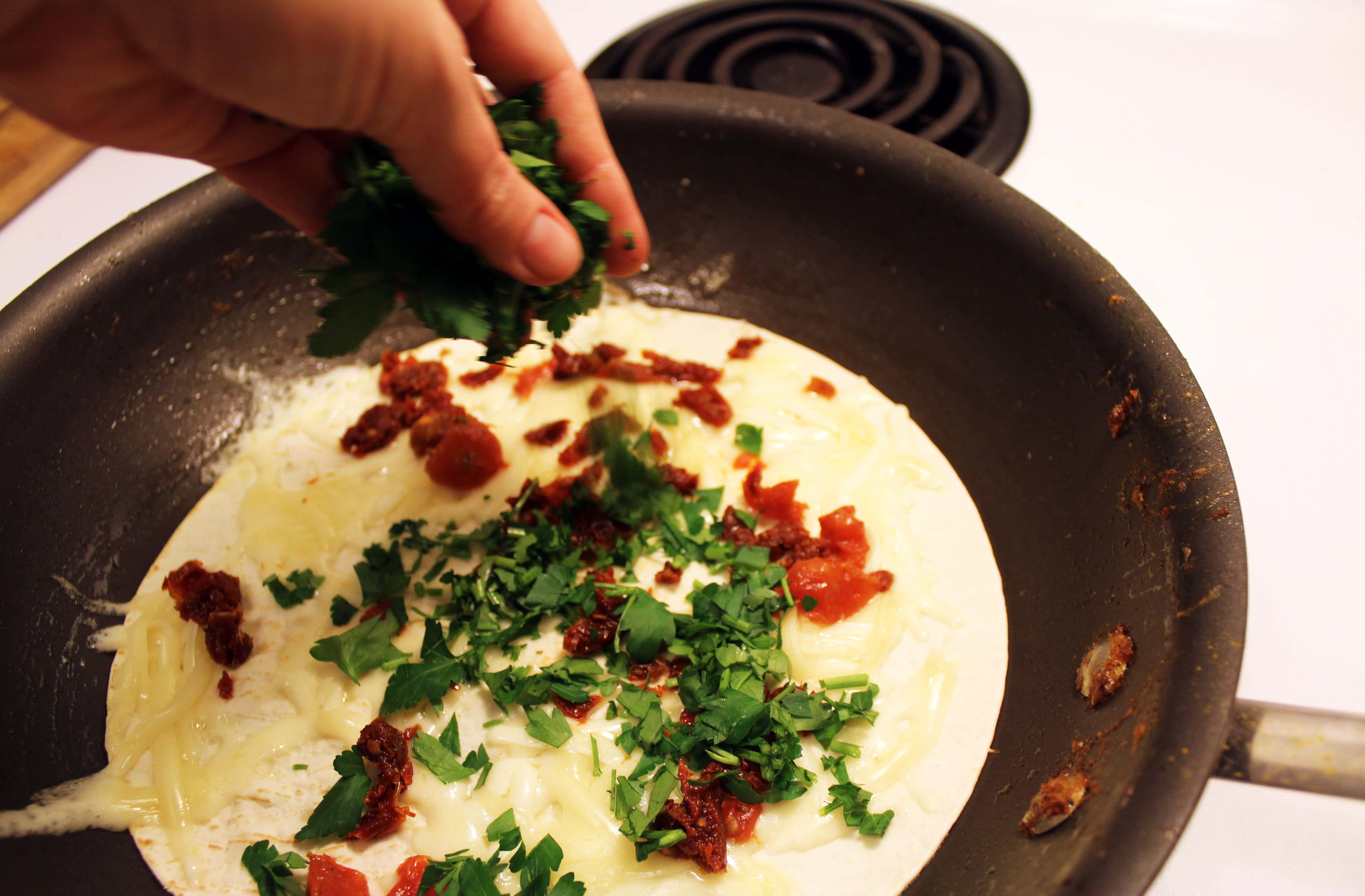 I used a ton of parsley in this for one important reason:  I like it.  I love the fresh, grassy flavor in a big way.  You don't have to use fistfuls of herbs though, unless you want to.

See how the cheese is starting to melt?  That's great.

Once all the crap is in the quesadilla, add another layer of cheese, then another tortilla. 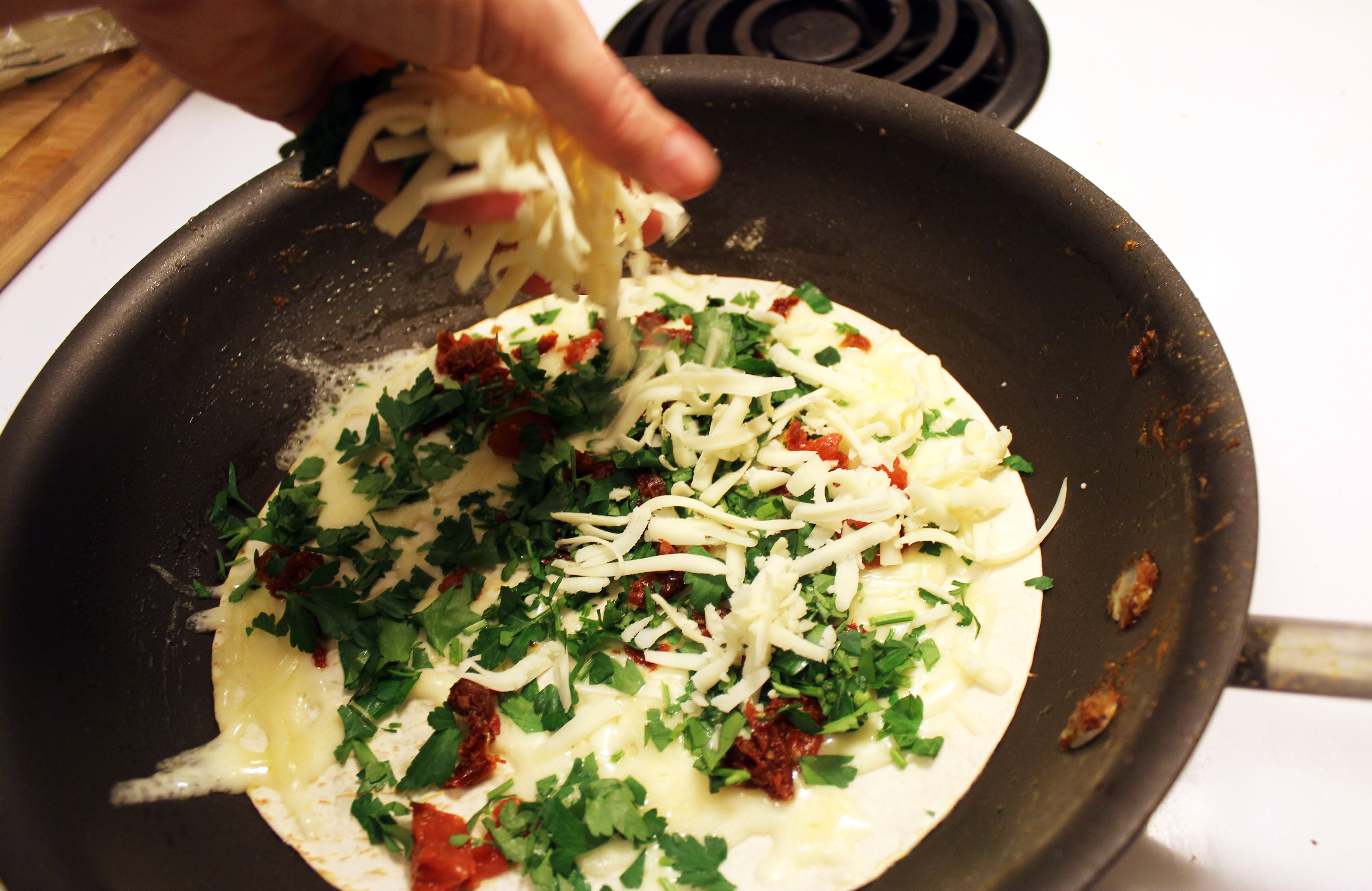 Use a spatula to mash down the top a bit - if some cheese oozes out that's ok!  When the cheese is nearly melted and the bottom tortilla is golden, flip the quesadilla with a spatula to brown it on the second side.

A note on flipping:  just go for it.  It might slide, some stuff might fall out, and that's fine.  Just flip it and aim for the pan - if it doesn't fall on the floor I consider everything a success. 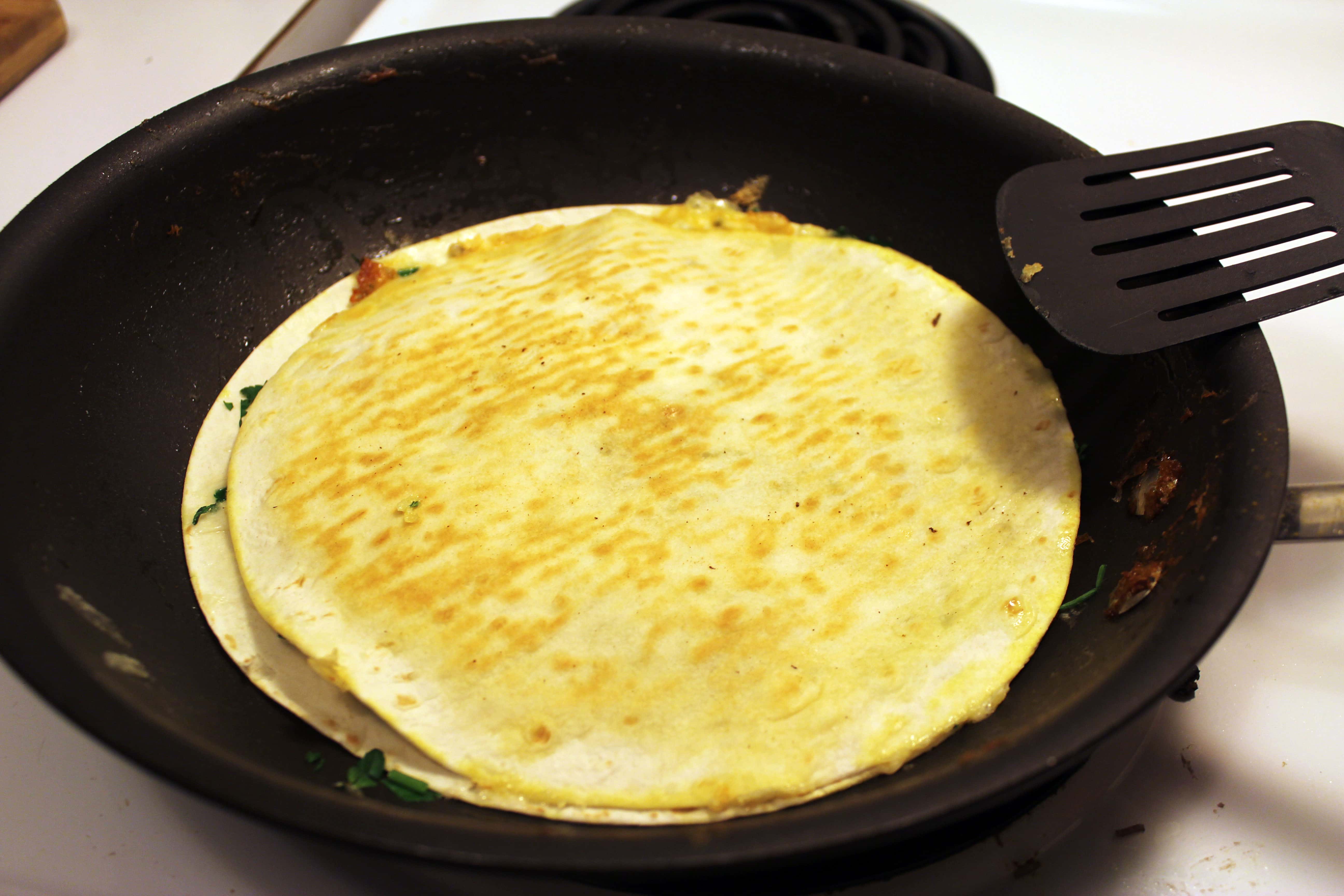 The bottom tortilla is larger - it'll shrink when it hits the heat, no worries.

Let the quesadilla crisp for a minute or two more until it's as toasty as you like it, then slide it on a cutting board and let it rest for 60 seconds or so so you don't lose all the cheese when you cut it. 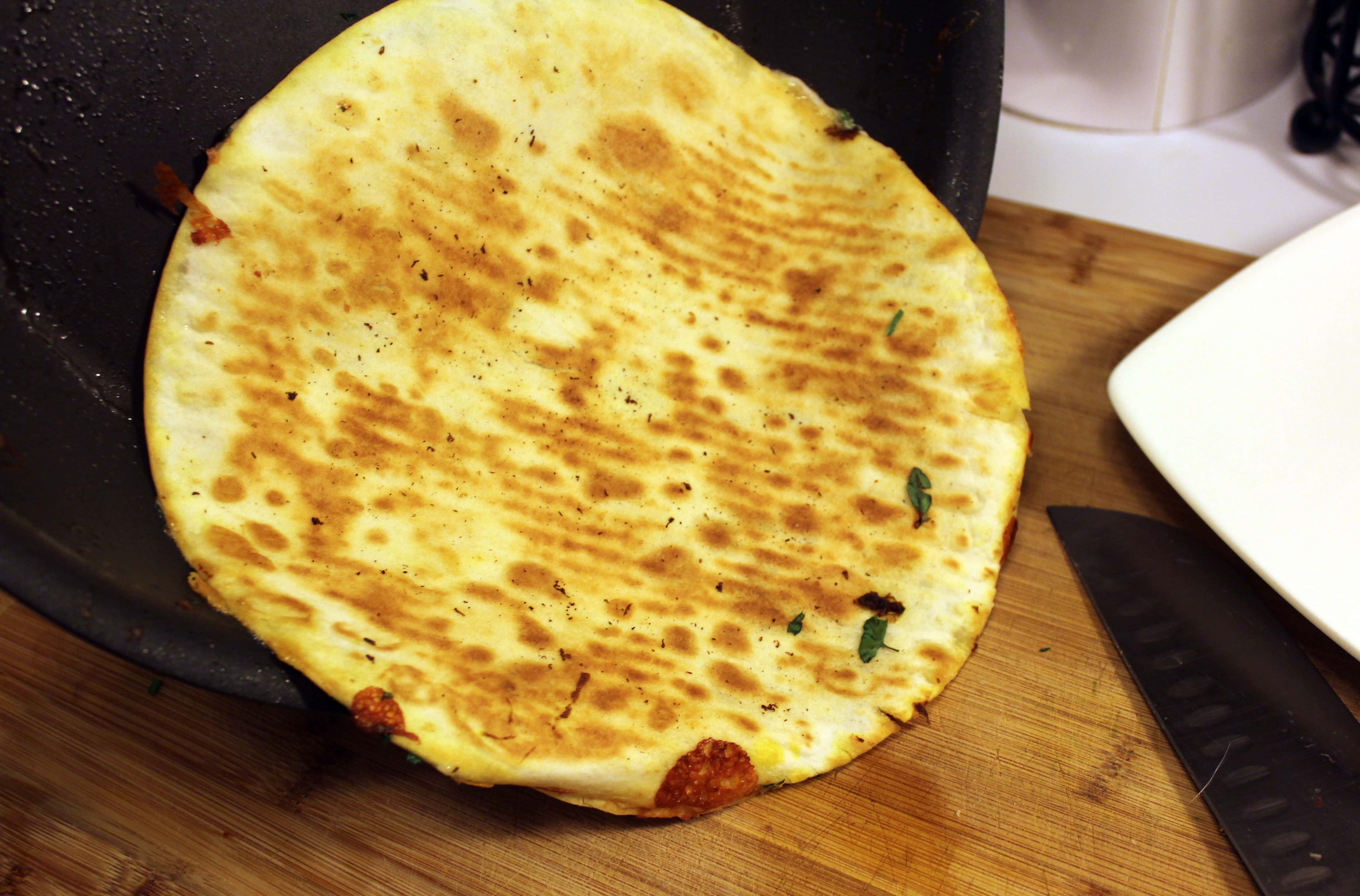 Now, cut this bad boy into wedges and kick your dog or your boyfriend when they get near you cuz you're gonna eat ALL of this, dang it. 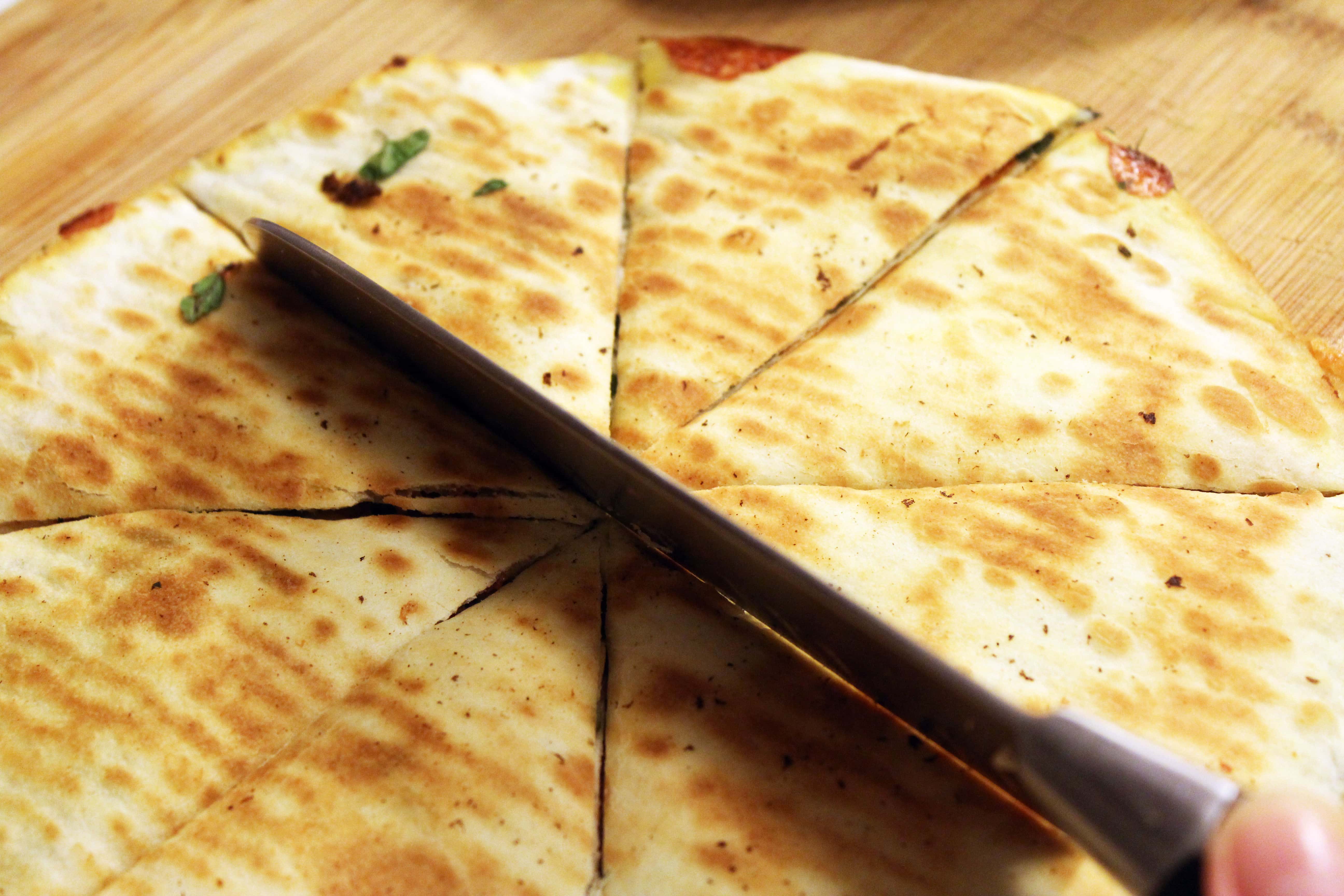 Serve this with your lovely dipping sauce that you've already made.  Heck, add a salad if you're feeling healthy!

Enjoy these!  You can mix them up so many different ways, and you can grate a bunch of cheese, get out some veggies and fillings, and everyone can make their own quesadilla when they're ready to eat that night. 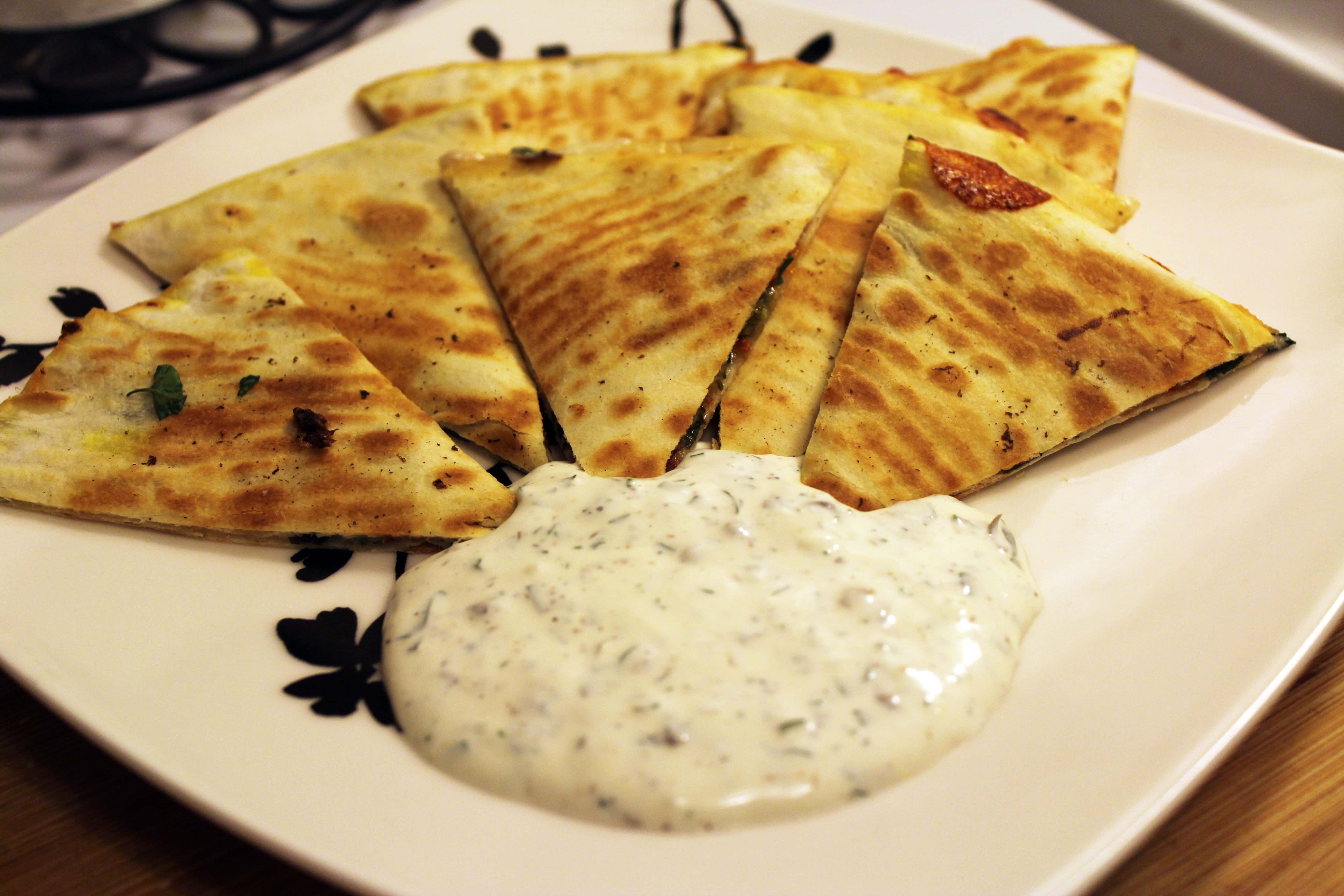